Journey to the Death Valley

United States of America
Photos of Death Valley April I will start with the end of the show :)
This is almost the last did that day frame - sunset. Next was a way back into our goodies in Vegas, for the most part already in complete darkness, with only one small stop at a roadside Walgreens to buy new sneakers. Why the need for such a purchase there - will explain below. And this is the picture I leave on the cut because he was on Flickr the most popular of made that day. 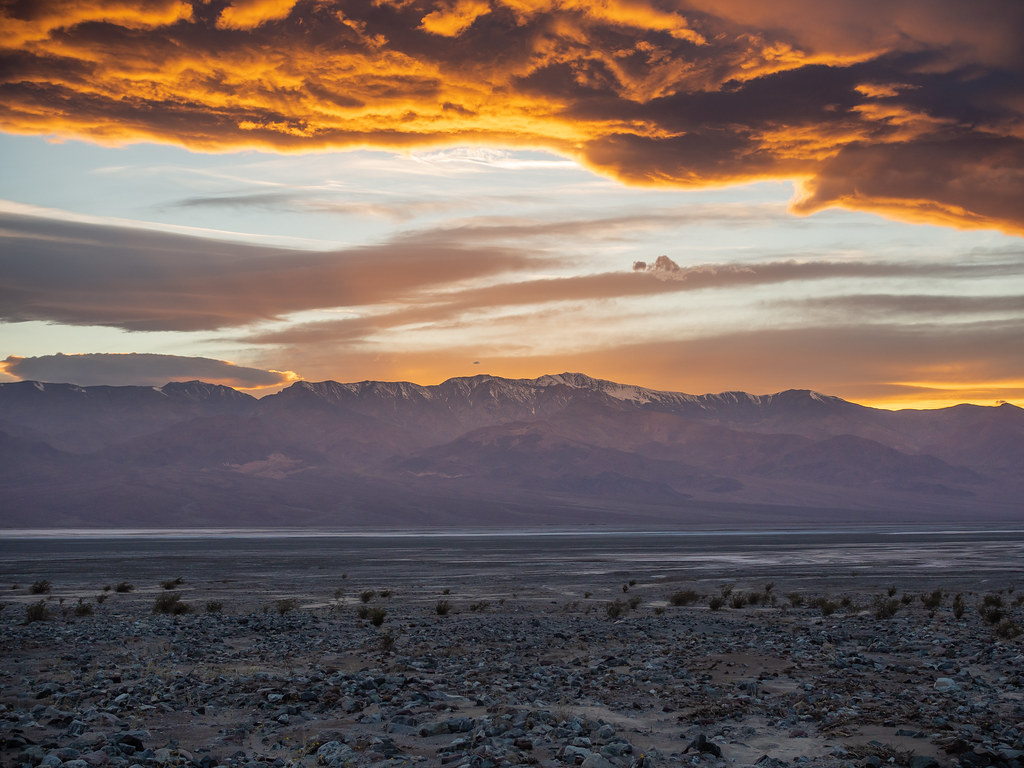 But the rest - in order.
In Death Valley, we went right after the wedding night. Waking we admire once again the views from our 46th floor. 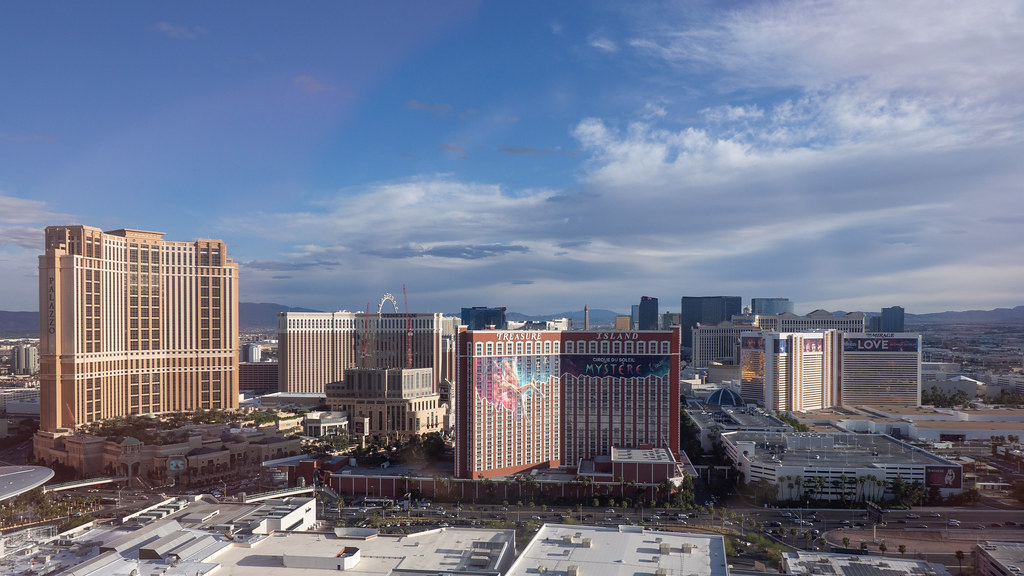 And we decided that, as newlyweds, we are supposed roskoshestovat, so - breakfast should be served in the room. 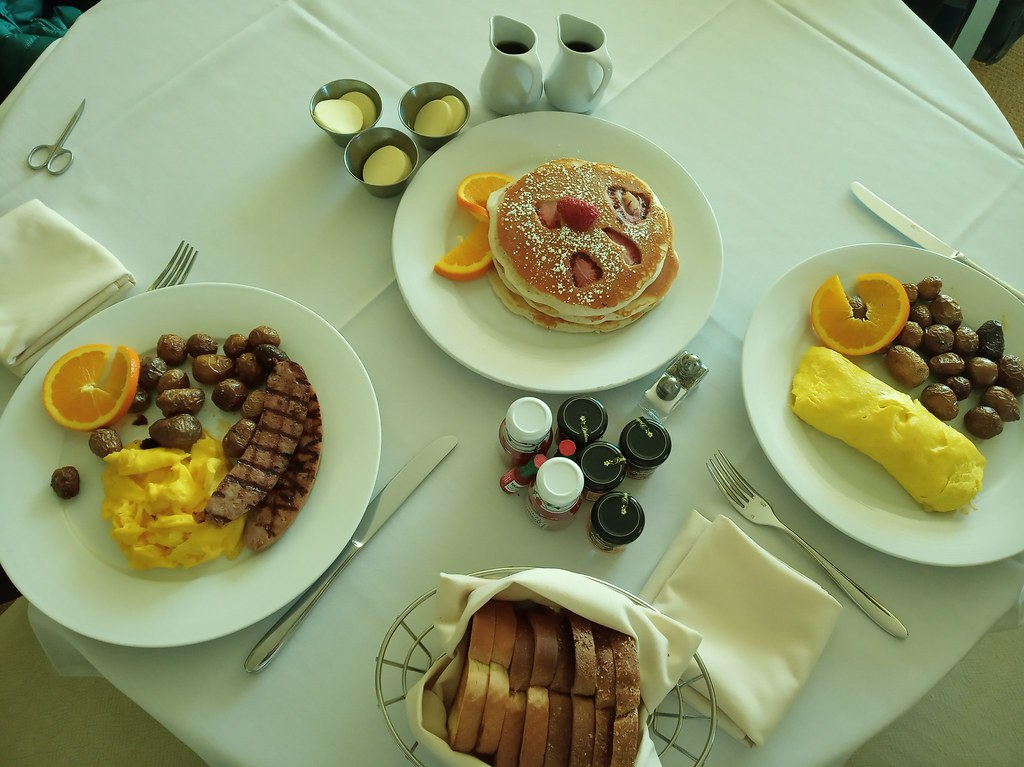 Omelets and do not fall into the frame cappuccino were great, but the pancakes could have been tastier. Trump should write that in his hotel pancakes are baked so-so. Let sends cooks blinopekov refresher courses in Ukraine.
After breakfast, and having met, we went down to the lobby and demanded his car from valet parking. The Trump hotel the parking is free, apart from a tip two dollars, which expects an evacuation transport your car to the entrance of the hotel "Diamonds". But here's the issue sometimes have to wait quite a long time. Another reason to write Trump.
When the car was taken and we sat down in it, I discovered the problem: reducing the pressure in the rear-right wheel. I discovered she was not the first time: two days before the corresponding indicator lights up already, I went to a gas station and pumped up wheel. On the American gas station pump requires coins, not as an Israeli - free of charge. Goon! The next day, the wedding day, we did not use the car, and that's - again, the pressure is reduced. So it was not a coincidence, but the tire is damaged.
our car was from the Alamo. This rental company I used for the first time, it was quite convenient: make out very quickly, and the car itself choose in the parking lot itself. Accessible only to a rolling offices in Los Angeles airport difficult: shuttle bus to wait long for the first arrived, you can not yet climb, and then go far enough. Probably from the output terminal of the entry of the Alamo it passed at least 40 minutes, if not hours.
Alamovskoy on parking machines are sorted by grade, you just say what grade parking sector corresponding to your request, and choose there any which enjoy. We take away employee rights, scans the sticker on the windshield and thus "binds" a particular car to your contract. As I understand it, you can take the car in the parking lot and a class higher than that in the order, just the card immediately write off more money. Probably on a system and is designed. But we and so was ordered SUV.
I chose this one Hyundai Santa Fe. In it, we drove from LA to Vegas through the Mojave desert (where this photo was taken). 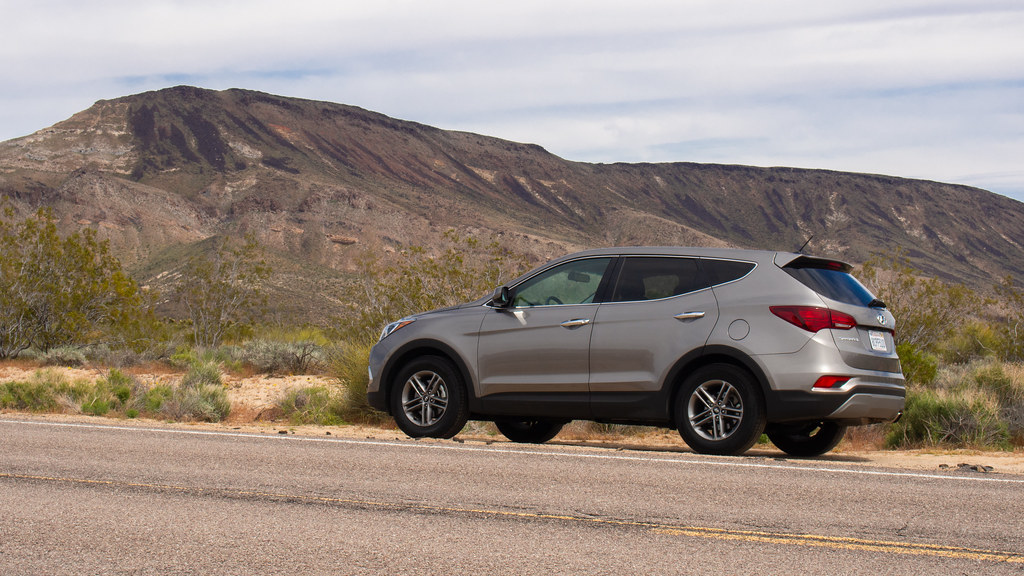 It is not clear where we damaged wheel - on the road not traveled. Or maybe it was damaged from the outset. But, of course, in Death Valley with a damaged wheel can not go. Because when you order me some shares went to "free" super-duper insurance, including damage to the wheels, it was decided to simply call the nearest Alamo and change the car. Nearest - airport Vegas. There are, however, the situation was not as rosy as it was in LA. Parking was empty and there was a line of suffering, which gave the car arriving as they become available. However, we asked if we do not want to wait, pick up directly instead SUVa car Nissan Altima. A proposal that we have used, and do not regret it. The car is very good, I liked it. In contrast, by the way, from Santa Fe, which I was not happy.
Here is our Altima already in Death Valley. 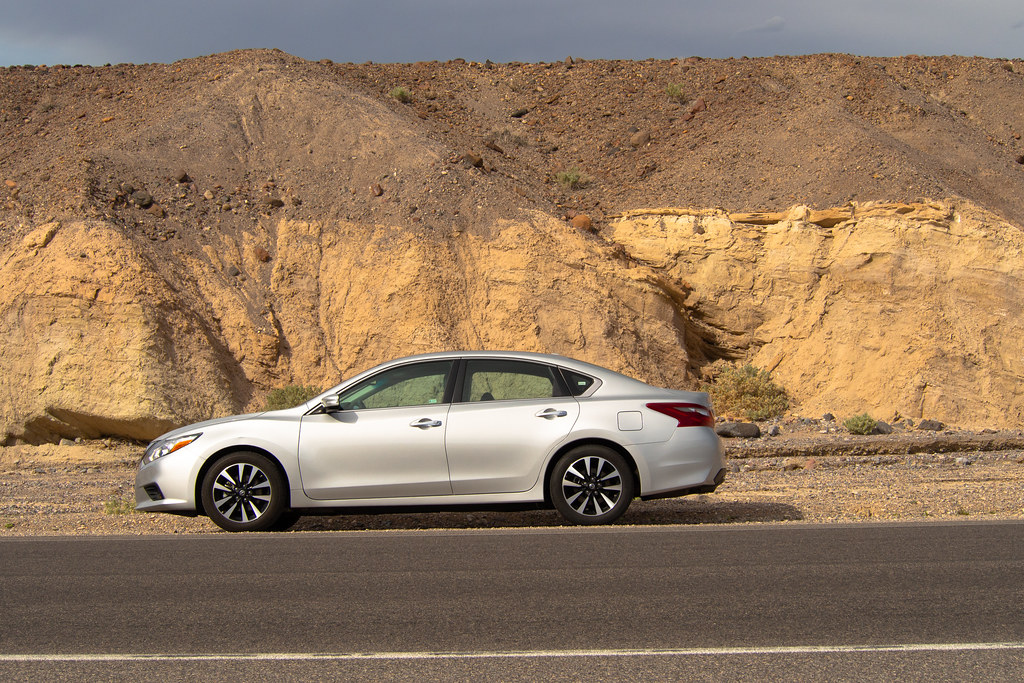 On the map I have outlined our itinerary from the airport in Vegas Death Valley and back to our Trump Hotel. Google believes that pure riding 6:00 17 minutes. It seems to be true: with all the stops were probably 10 hours.

First stop excluding refueling - at the entrance to the national park. There will need to pay to enter ($ 30 per car), located stands with maps and all sorts of useful information. There are no servants, pay for itself in the machine such as those in parking lots. For the money you can hang out in the park either week, or two, but we it was not true. All of this farm is located in the side of the road, not in Zion Canyon, for example, where the payment machines are located directly on the highway (and, it seems, even a barrier). So when I was in Death Valley for the first time, in 2012, that do not understand that it is necessary to stop and pay something, and passed "hare".
Once stopped, it is necessary to photograph the area. 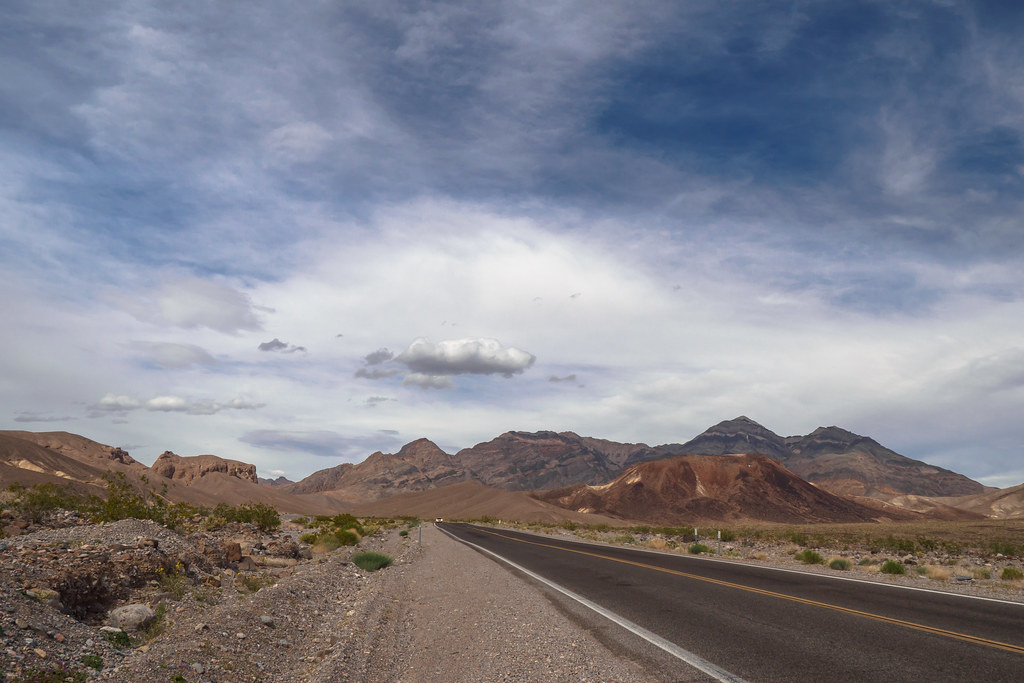 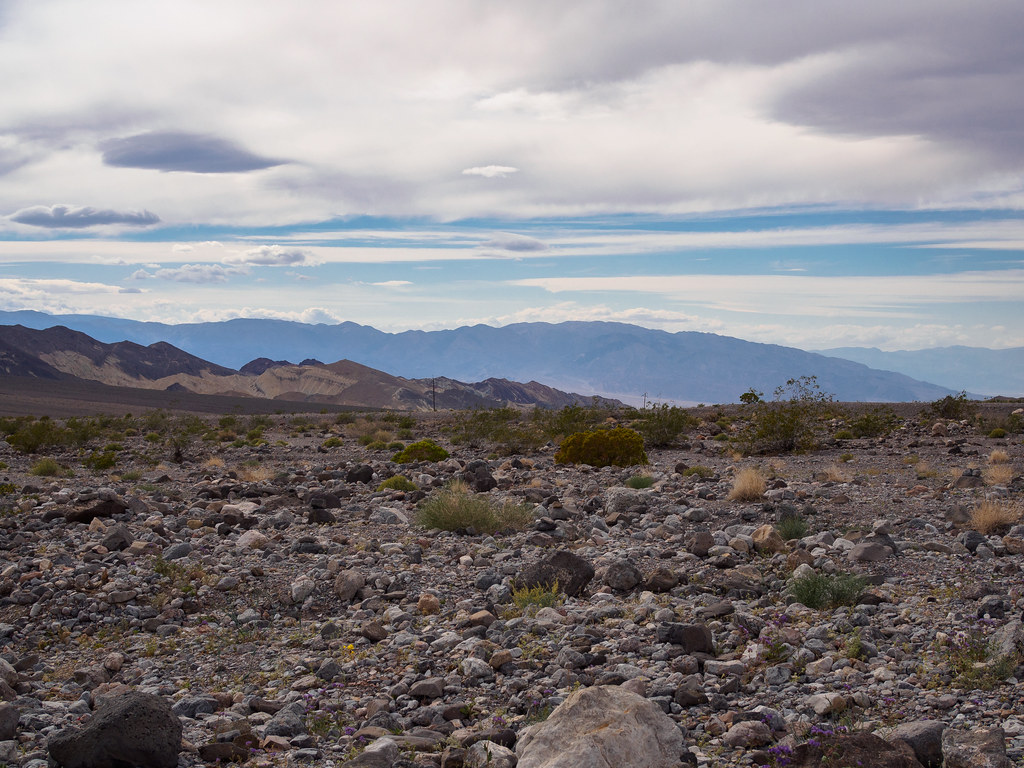 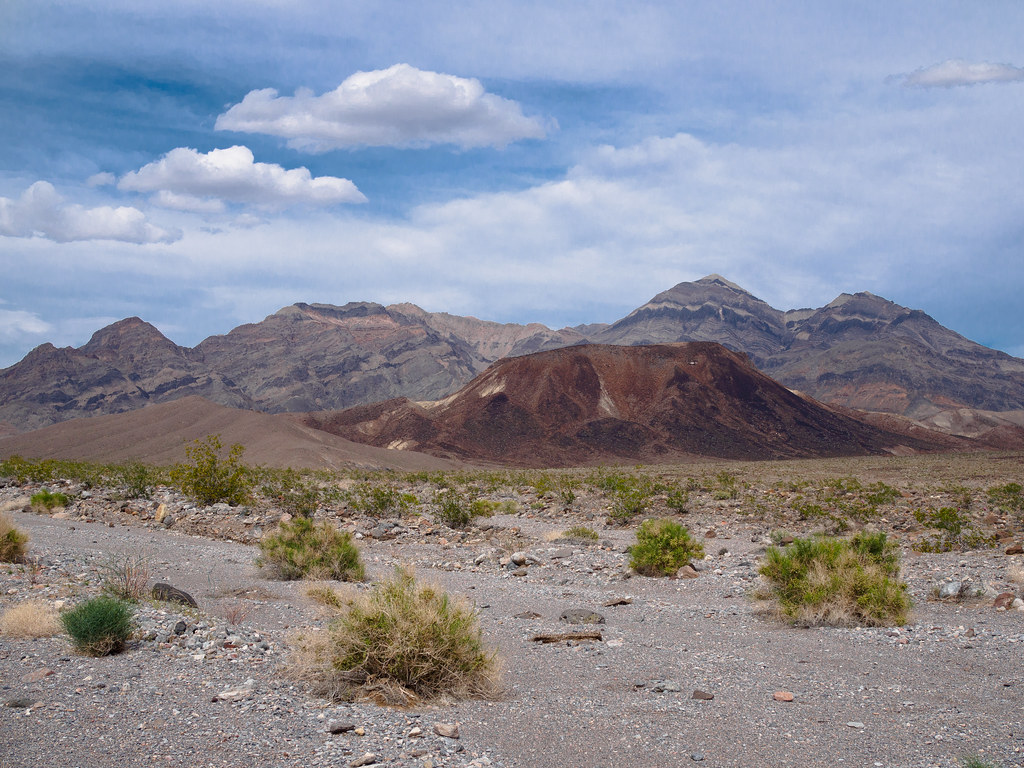 The next stop was at a place where it wanted to photograph the picturesque cliffs. 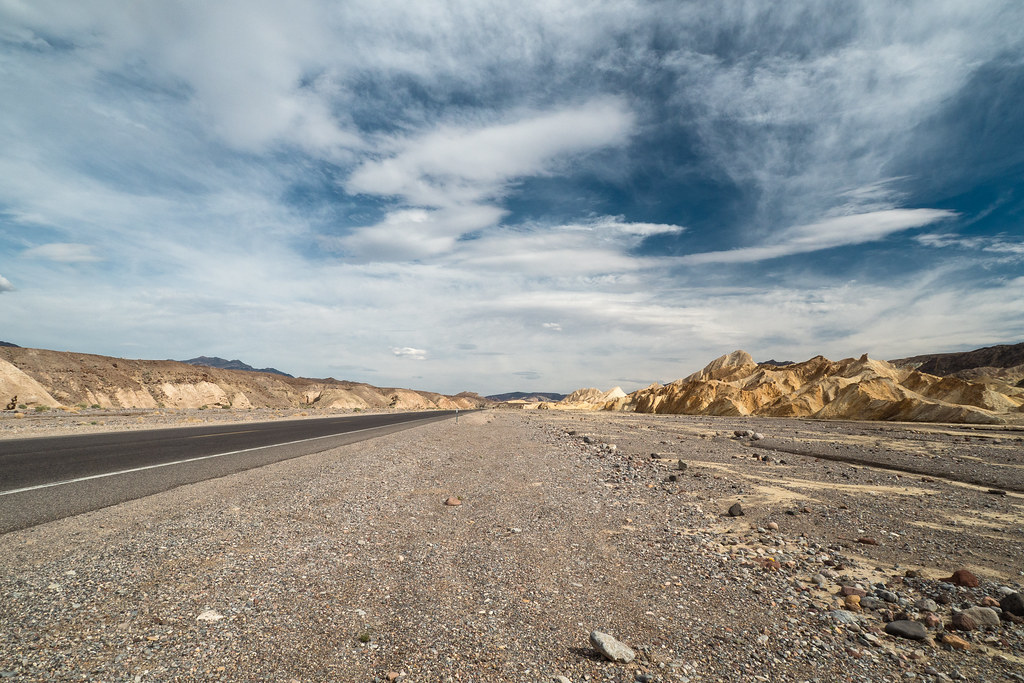 Then it turned out that we have not reached all of kilometers to the famous Zabriskie Point. Here she is: 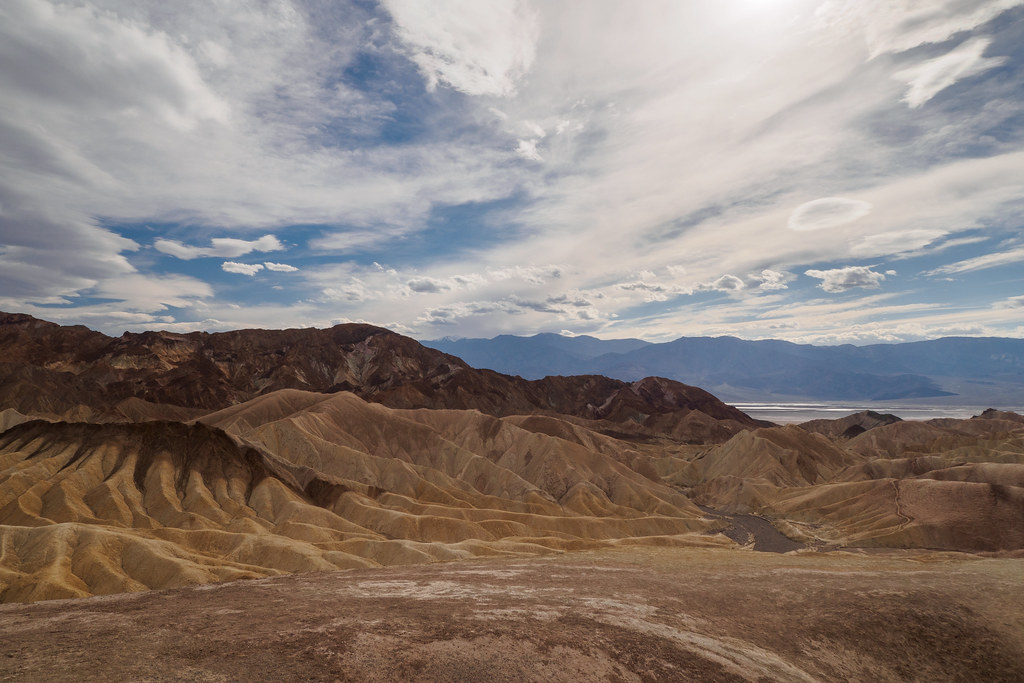 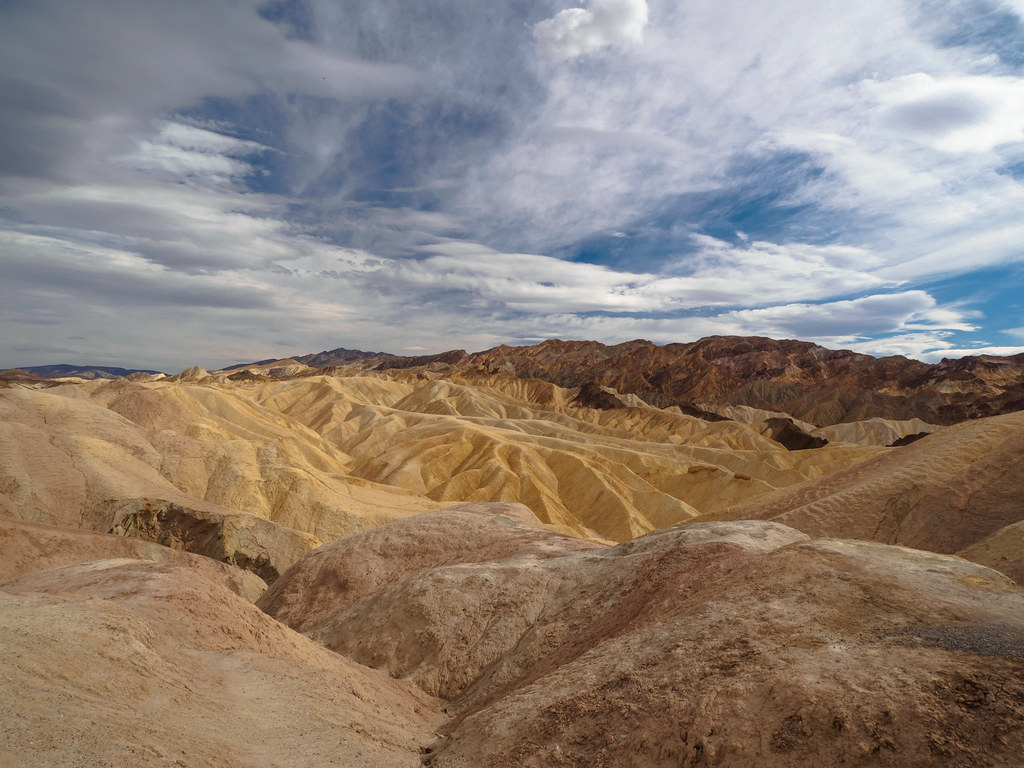 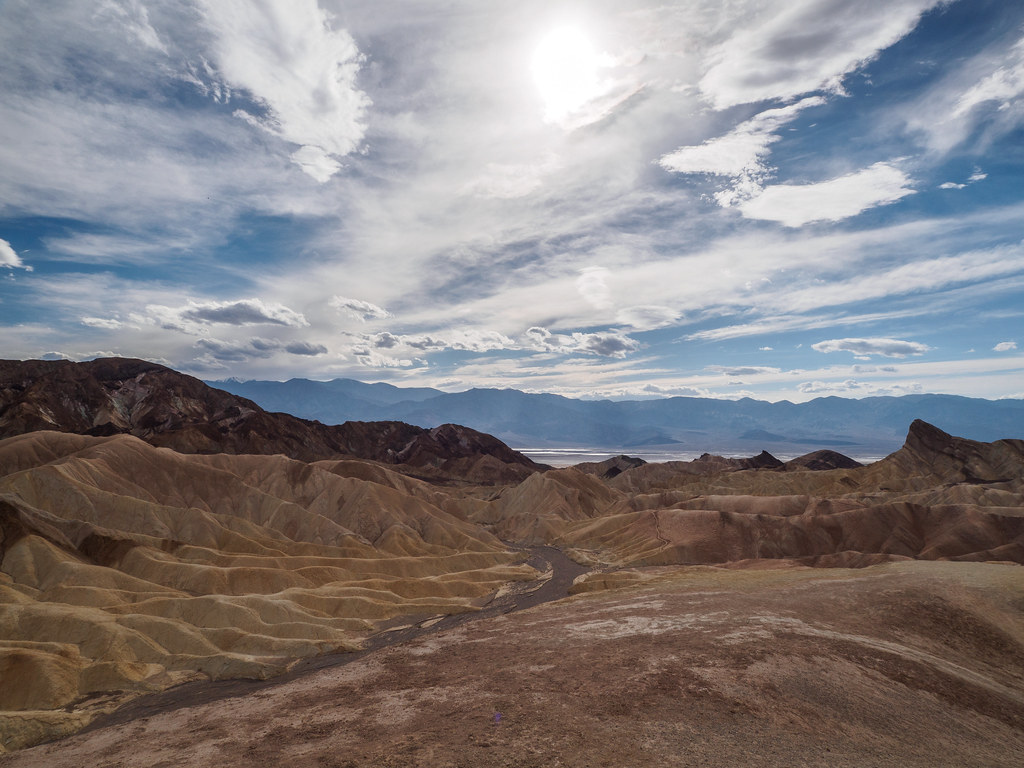 Then we went to the "Vizitor Center" National Park, but decided not to go into it, turned around and went to Golden Canyon. 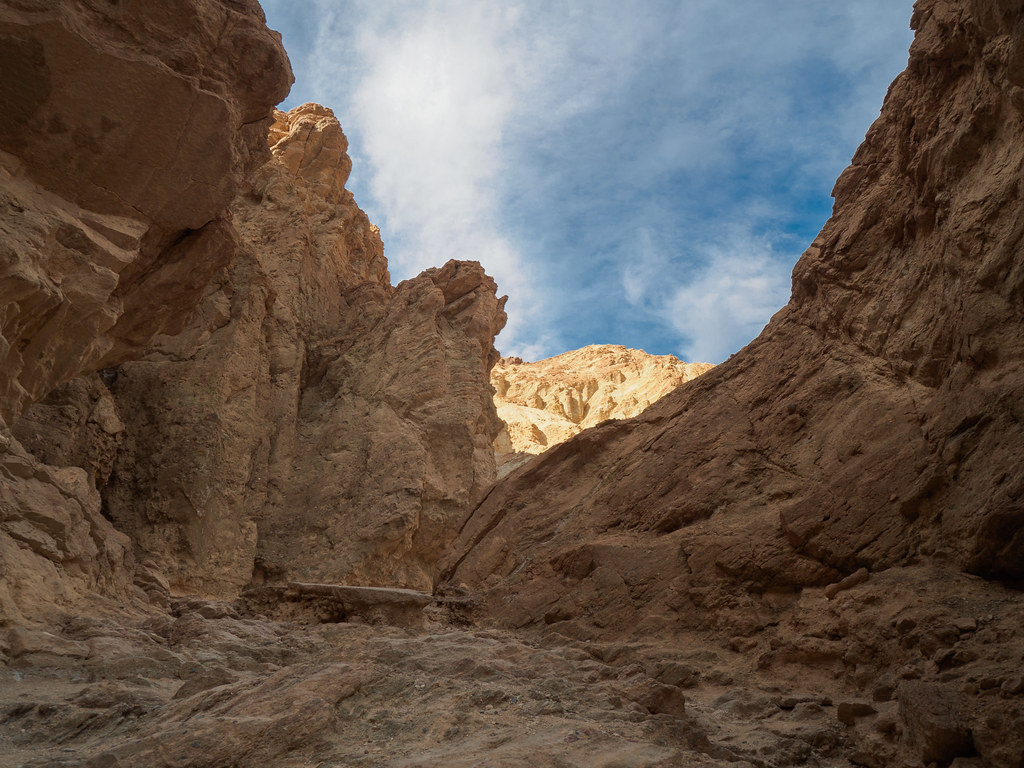 The canyon you can walk back to Zabriskie Point. But we did not have time for it, and the shoes were unsuitable.
The road on which we are now traveling, Badwater Road, runs along the bottom of the valley, located below sea level. To better see it covered with salt bottom, we turned onto a side road, West Side Road. 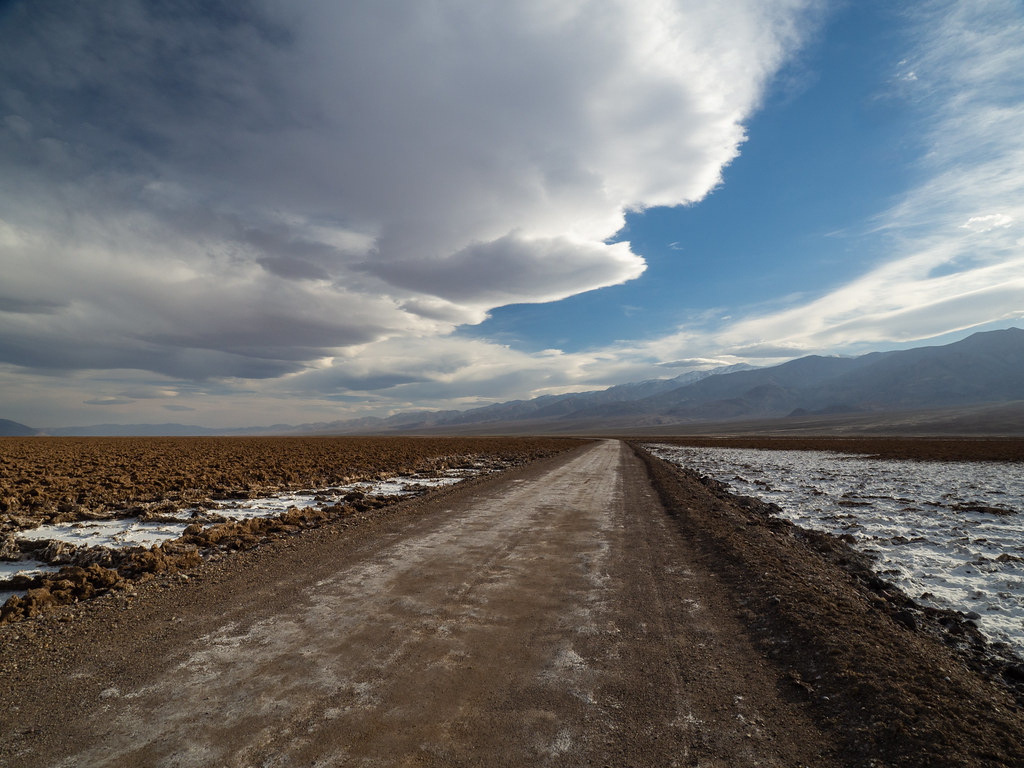 Fantastic views around! White - it does not snow, the salt! In mid-April weather in Death Valley it was not deadly hot, but it was quite a summer. 26-28 degrees. 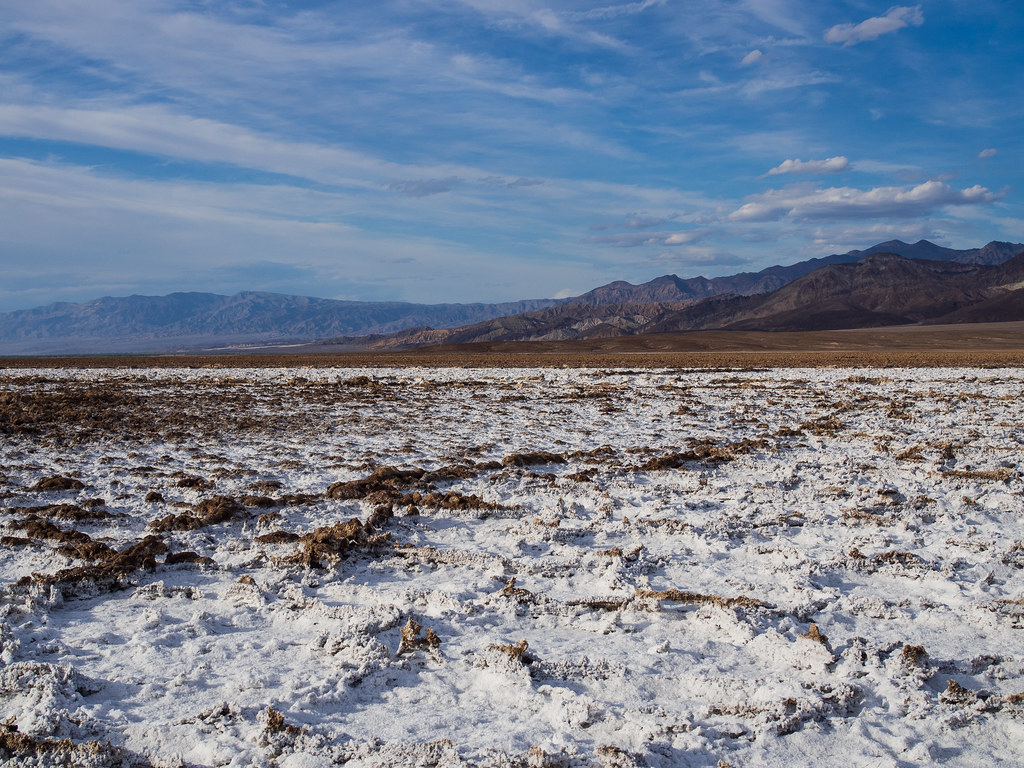 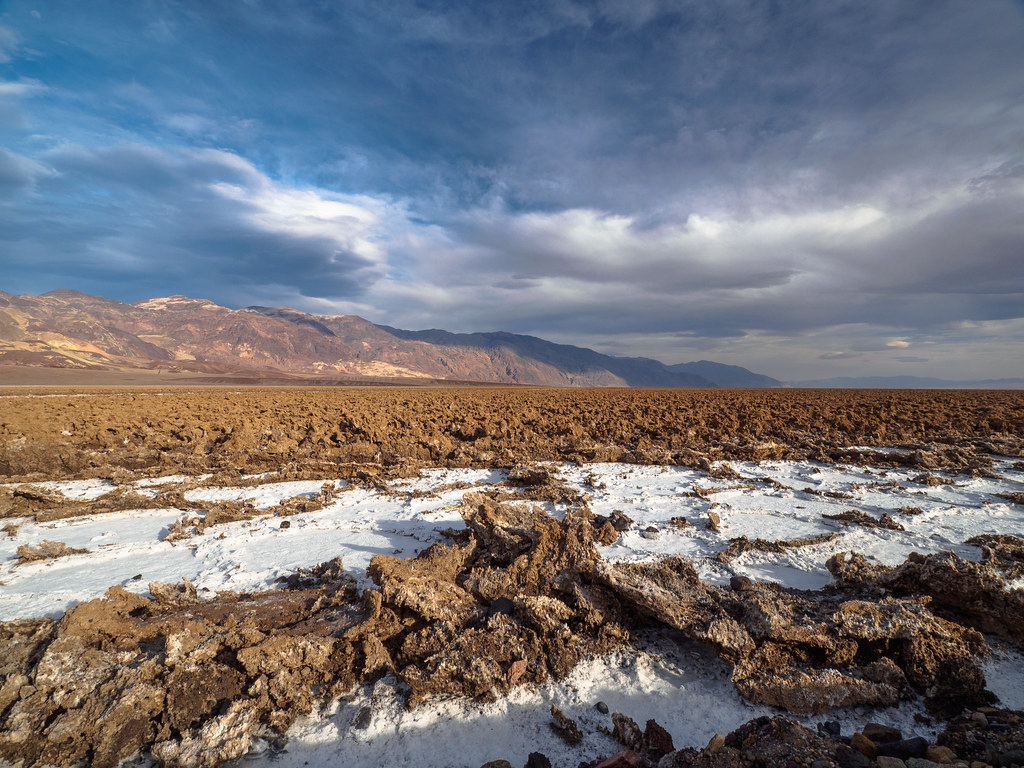 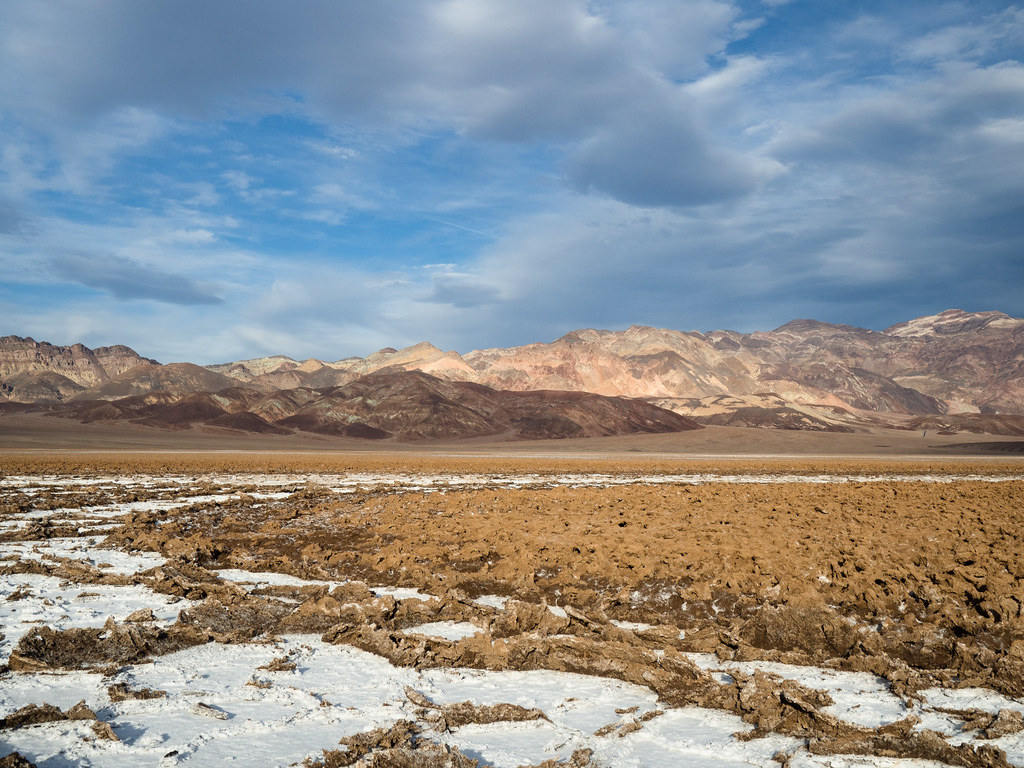 Far deeper on the primer did not - too dusty. Back on the highway. Next stop - Badwater, the lowest point of the United States, 86 meters below sea level. In the photo below you can see the car traveling along the slope of Badwater Road highway. 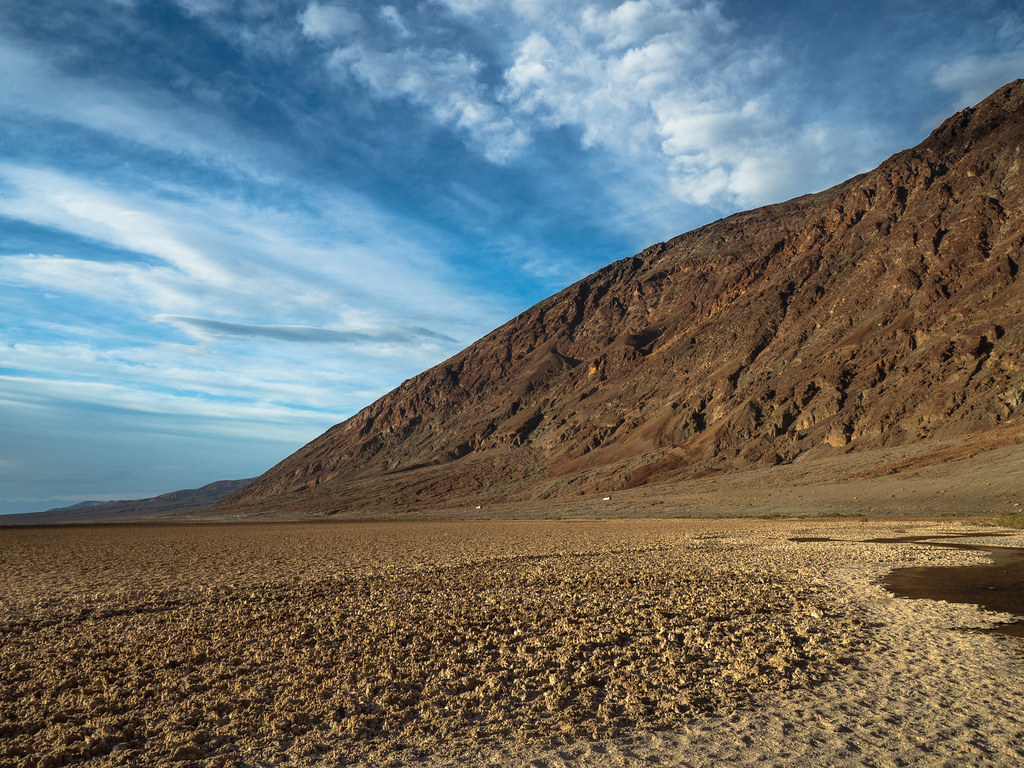 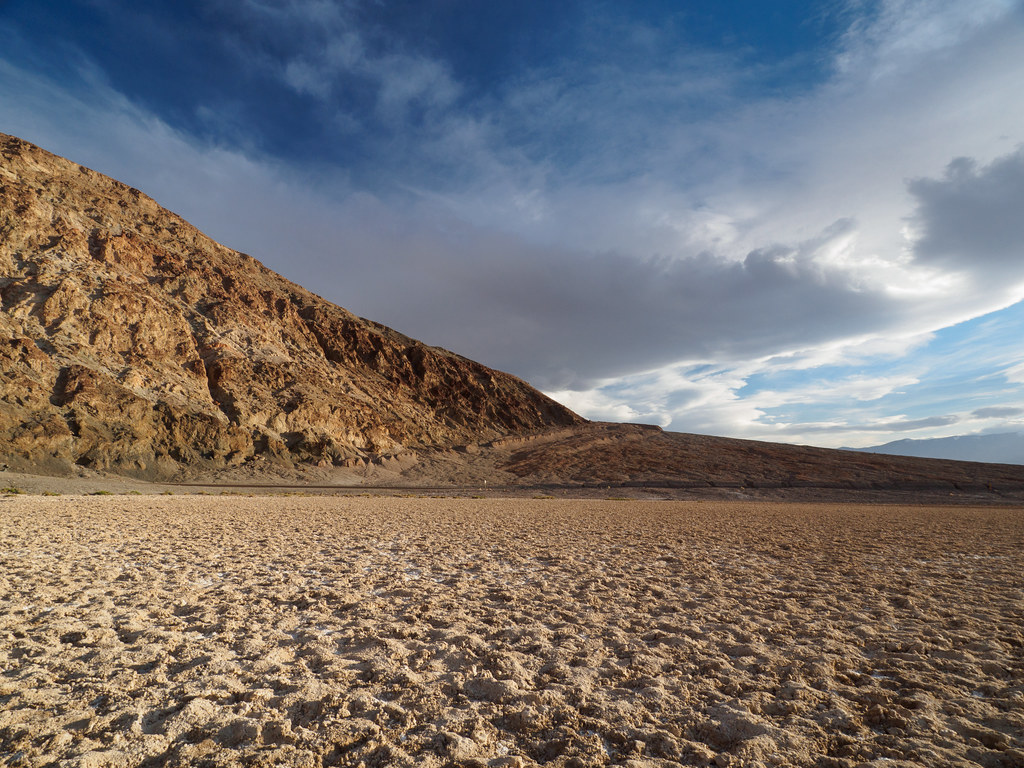 For the convenience of the tourists on the slope marked sea level: 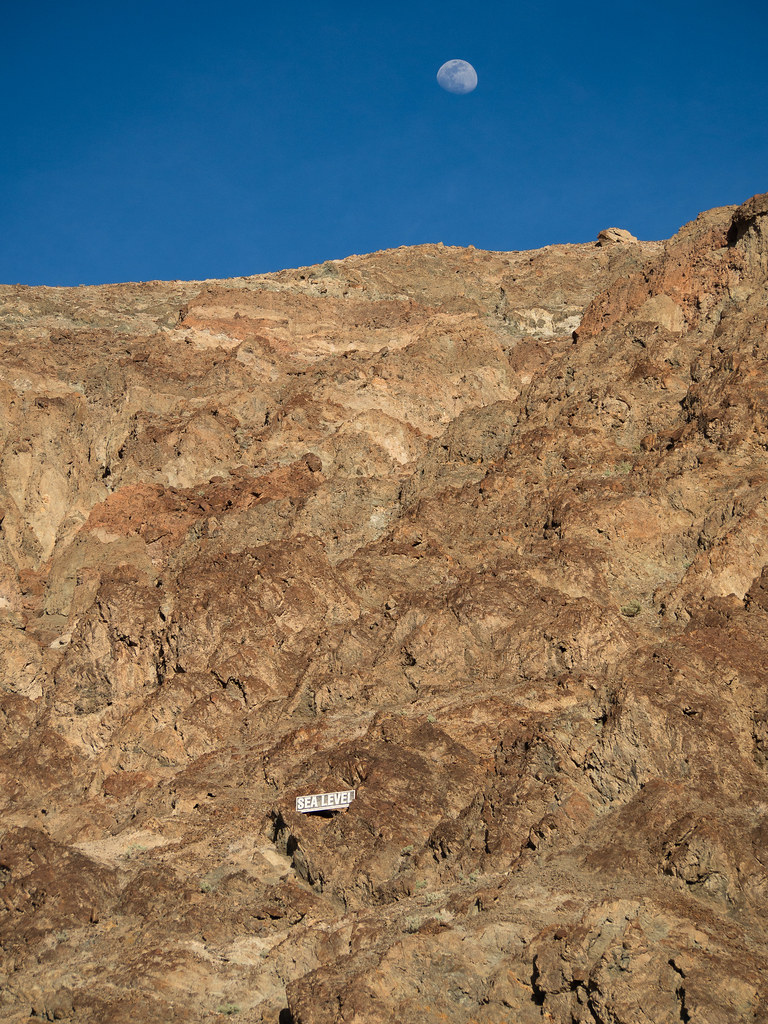 Next stop was made at the place where the highway very close to the salt povehnosti. I wanted to make a few shots near the surface. But did not work: thoughtlessly absorbed in that, as it turned out, is actually a salt marsh, I fell one leg to the knee. Here's how this moment was captured by:

Not that pull the leg has been difficult, but sneakers with this foot disappeared in the salt mud. There you can see the next set of footprints, but it is - not human footprints. The animal was apparently much easier to me :)
Second sneakers survived, but was terribly hydrochloric plastered with mud, and I threw it on the spot. Sorry, good dude Crocs were bought for 40 bucks in just 2 days before the mall Fashion Show at our hotel.
That's why it became necessary to stop at the pharmacy to buy new sneakers. For enter the lobby of the hotel Trump barefoot I did not dare. But I had to drive the car until barefoot.
Soon the sun began to set. More pictures from the last stop: 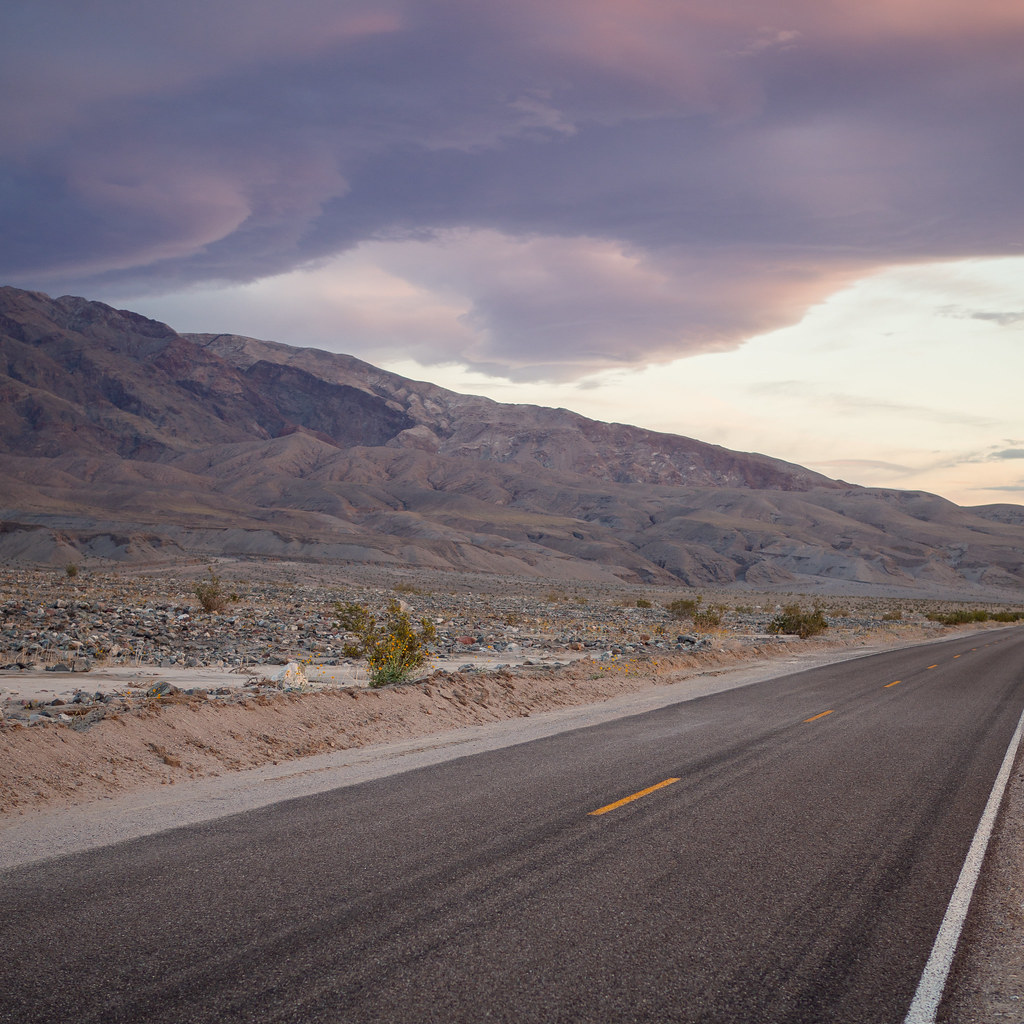 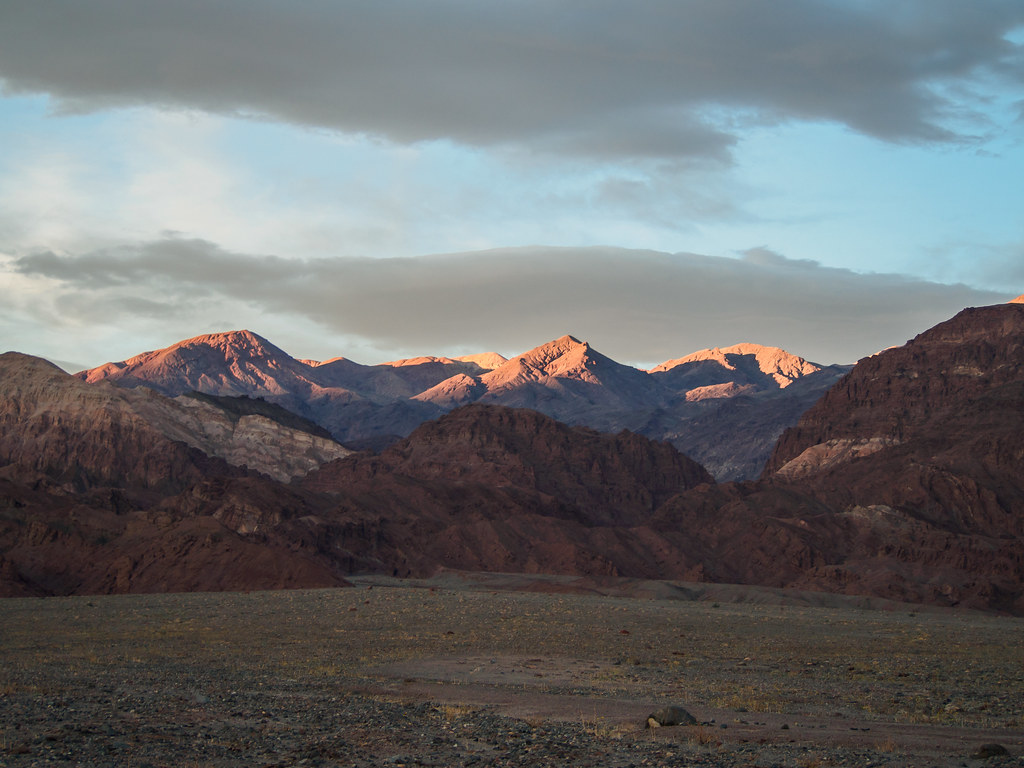 It is interesting that in all the way from this last stop before entering the town Pahrump, where the road joins the "big" Highway №160, but it is somewhere 60 miles, we met only one car. And even that turned out to be police: moving forward and coming up with us, it for some reason, turned on the chandelier. I was afraid that I will now be arrested for speeding (by limiting to 60 I'm on this road is completely empty of good driving, perhaps 85 miles per hour). But once I started to slow down in a couple of tens of meters behind us the police have paid their luster, and without reducing speed, sped away. What it was - is unclear. Maybe they're the state border patrol? It was also California, but it miles over 5 up to Nevada border.
In Pahrump'e We stopped at Walgreens'a and wife went to buy me new sneakers. So, having passed at the car, "Diamonds", we, as the bride and groom and decent tenants decent hotel, entered into its lobby "befitting" form. However, I was no longer in Crocs for 40 dollars, and the Chinese noneyme 8 :)
Author: fizzik