Liverpool. Titanic 100 years. Interview with the Vampire and the Giants. 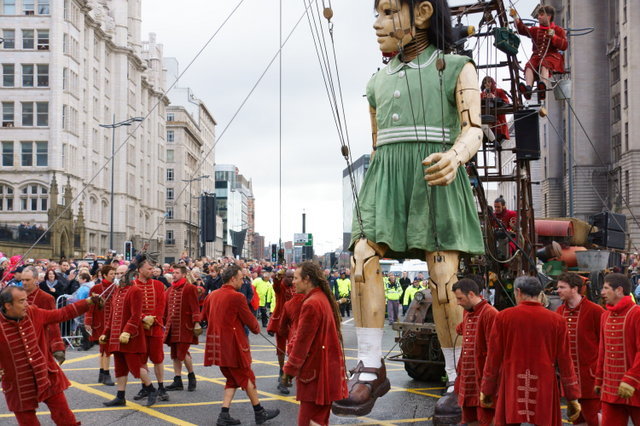 Titanic 100 years Britain has said in several cities: Belfast, where he opened a museum dedicated to the history of this wonderful ship from South Hampton was 700 people from the team of this ship, and of course Liverpool where the ship set sail into history. 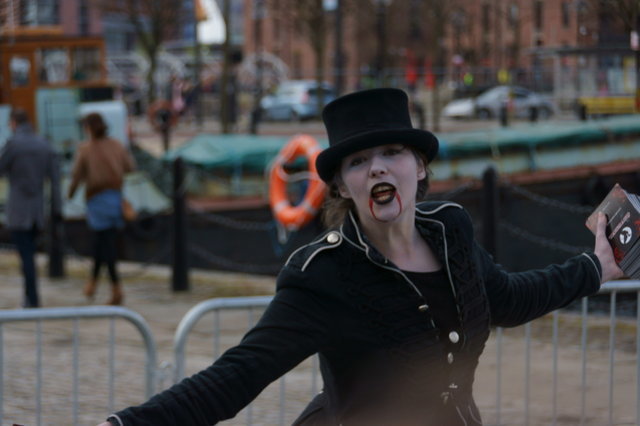 In Belfast 100 years celebrated on April 12 as it should be, according to the date, but in Liverpool was postponed for a week due to national races, the big British eccentrics. 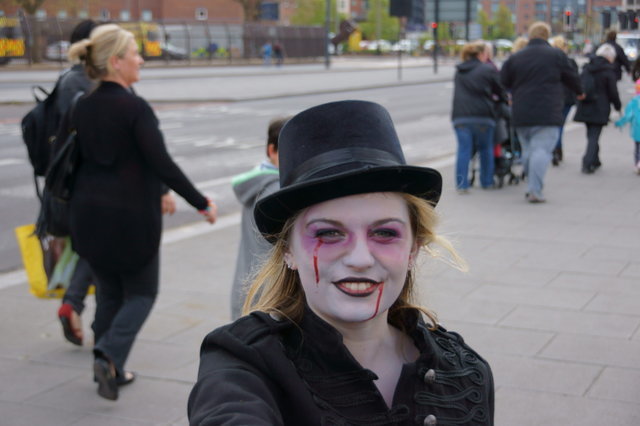 How did mention that date? First was a wonderful concert by the BBC, with a performance of modern zdezd and not very showbiz stars, plus the offset during the entire concert with Titanic letter, letters are very touching, almost all those present in the hall, crying, those who did not cry, it was evident that the very experienced and feelings concealed with difficulty. 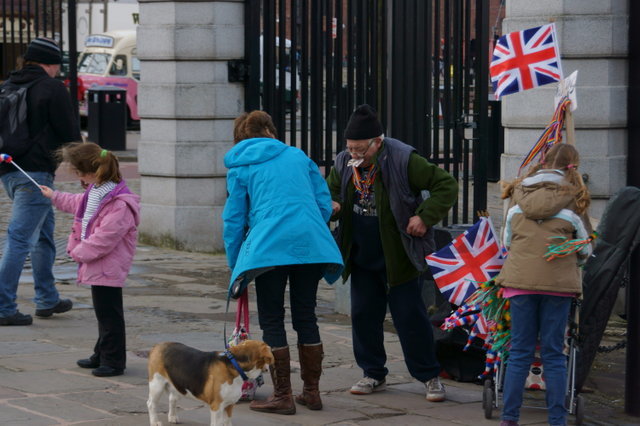 Then officially opened in Belfast Titanic Museum, which is today is probably the only reason to go to Northern Ireland as a tourist, health risk, plus the museum, it was a show with feerverkom festival, and a concert of contemporary artists, which in itself is a step towards attracting tourism in this part of the earth. 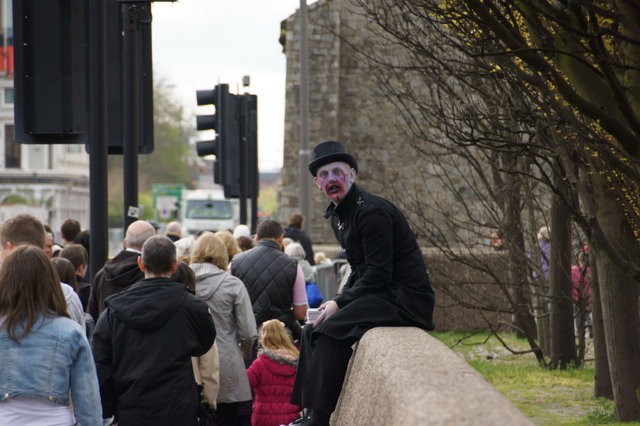 In Liverpool decided to put on a show with the Giants when I was younger, I was interested in the story of the races of giants who lived before on the earth, and skeletons which allegedly found on almost every continent of the world, but did not regret bringing this to Museum of History and Anthropology and here is a new attempt at a more interesting level, the new approach, the Giants in Liverpool, girl - who survived the sinking of the Titanic, and her uncle diver, their history, a piece of human life, and rasskazany shown as a play outdoors, I was terribly interested to learn what can come of it. 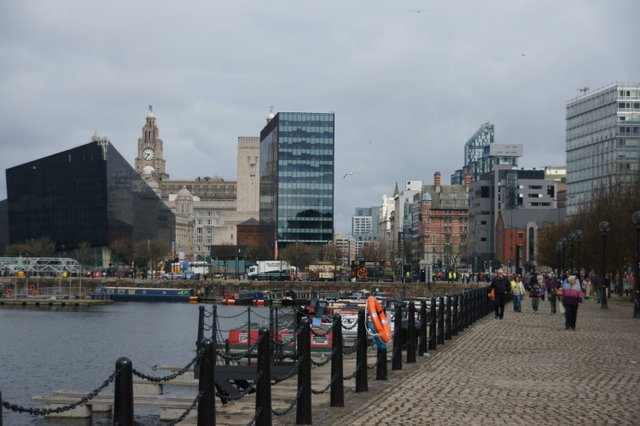 It is rather the show started early, even for the English, in September 30, Saturday, at Kings Dock, near Albert Dock, the story begins with a young girl, her first day after she miraculously survived, as if for the first time opened her eyes and smiled to the world, sounded extraordinary music, evokes a feeling of love for life, to everything that actually means something. 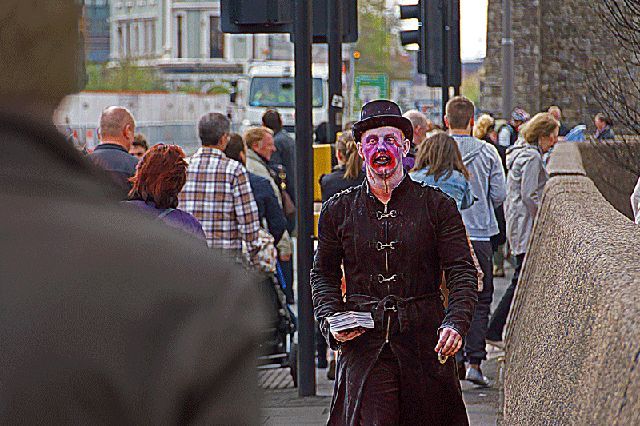 Then the girl got into his boat and popyla through the main streets of Liverpool, a sense of what that was fantastic, unreal, another dimension, the children who attended just screamed and ran back and forth, I have never seen so many bloggers in one place in England seemed every second resident blogger infinite flipping cameras, television, people shouting then applauded, then fought hysterically, was what that mass psychosis. 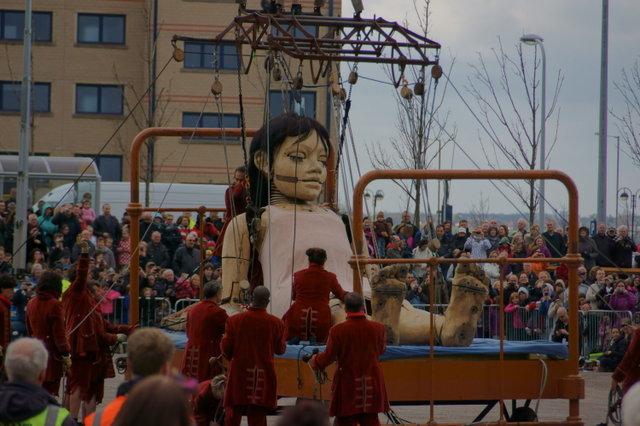 Even before the start of the show feeling of unreality meslenno crept to the crowds of people flocked to the Kings Dock, on people from the crowd attacked nevozmis bloody vampire was unusual, maybe, everyone was pretty serious make-up, and they were dressed, respectively, plus, in my opinion they are all were professional actors mk cope with their work quite successfully. 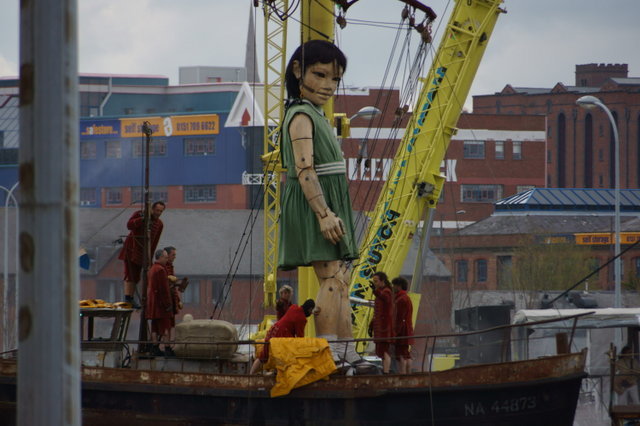 I took a few pictures, but one vampire noticed me and headed in my direction, I thought to be trouble, but I decided to fight back to the last. or until the last drop of blood, he quickly moved as befits a vampire, we zabyazalsya conversation, basically he wanted to learn more about the taste of Slavic blood, thinking I probably said that my blood is bitter salty because of vodka and pickled cucumbers, tomatoes, bacon and herring Mathias, vampire licked his lips and called his girlfriend, she had a nice smile, bloody course, maybe I suspect she had already someone eat it without ceremony held his hands on my neck, and I thought that the couple of shots that I did, were the last of my human life, and all that jazz, but vdug has played an unusually beautiful music. 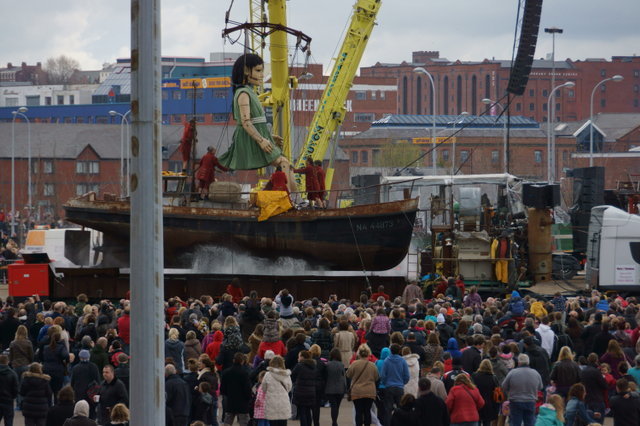 And vampires attention was absorbed by the show begins, the giant girl woke up and it was just beginning. 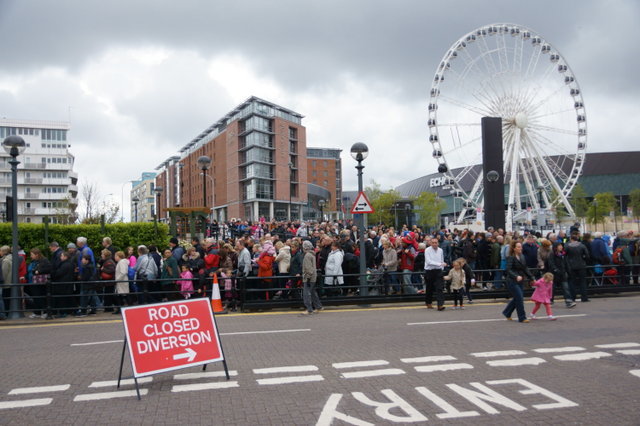 The girl had a dog, too huge, who entertained the audience with their incredible jumps, the kids were just schastlivy. 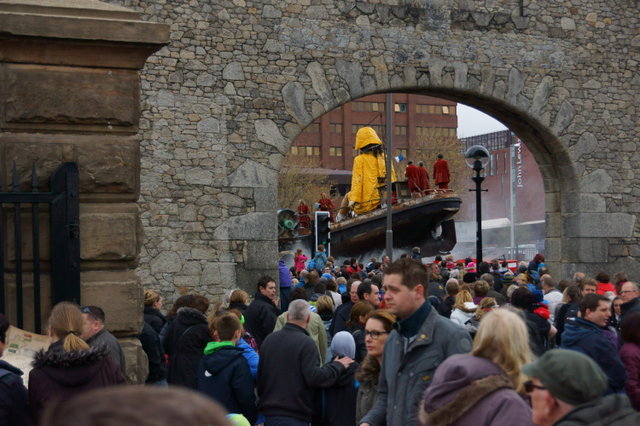 The girl slowly rose from his bed and looked around at all of us, felt probably like Gulliver in Lilliput country, I've never imagined that I would be a witness of this. 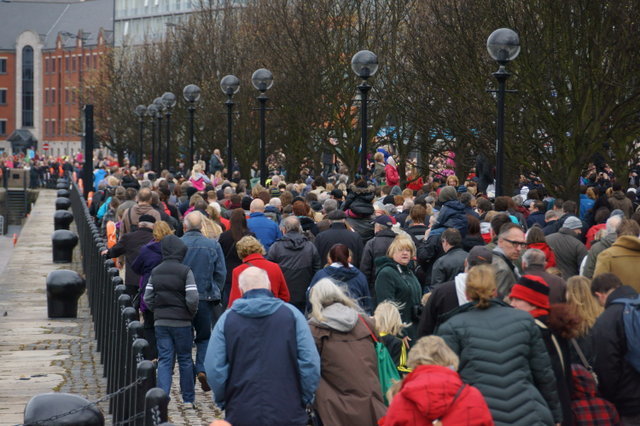 All roads in Liverpool city center were closed, the number of people who will visit the show was supposed to be about 250,000, but what I saw in my conservative estimate was twice as big, maybe people were divided into two parts, the girl and her uncle started their way from different parts of the city, and crowds of people to follow them were about the same. 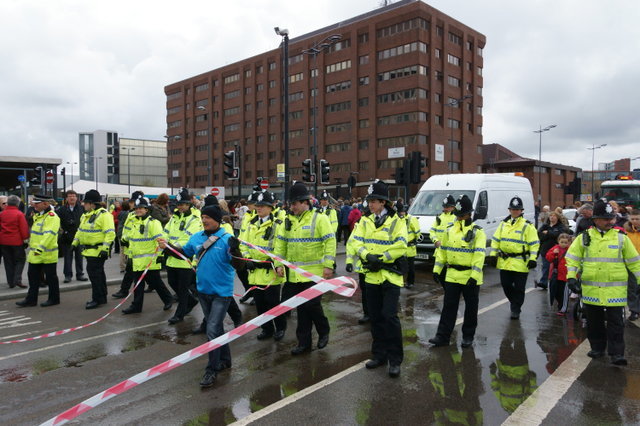 It was quite a lot of people in wheelchairs, no one wanted to miss this wonderful show, all have enough space, the police were about 25 - 30, that for such a colossal gathering of people, I found it strange, if we compare the number of police were herded in Moscow during the elections, but this is in fact the policy, but here show for the people in general of course, it would be nice if we got together not to protest or support and for that would be a good time to do, but once these our times, we need to bear this cross, probably. 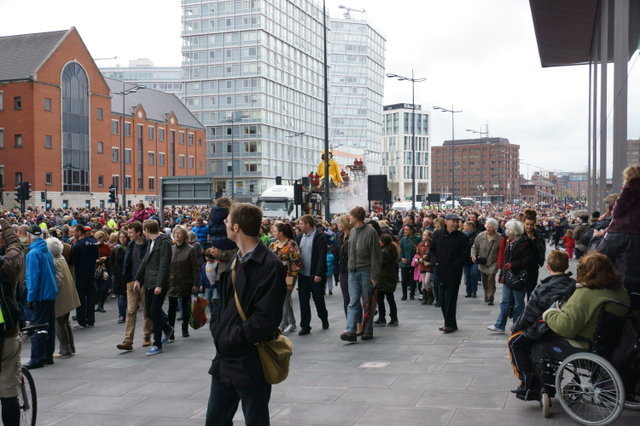 The girl moved slowly in his boat to the center of Liverpool, where she got out of the boat and walked on the road, it certainly was an unforgettable sight, follow it all the way it was impossible, maybe, streets are quite narrow and completely stuffed with people, so I moved to the center bypass that would see the arrival of Uncle diver, he came to the palace of St. George is not far from the main railway station, there is a huge capacity for the area, and by the time she became gradually filled with spectators, there were many parents with small children, wheelchairs, but there was no no hustle, all were vzaimovezhlivy and courteous, no organizational problems have arisen. 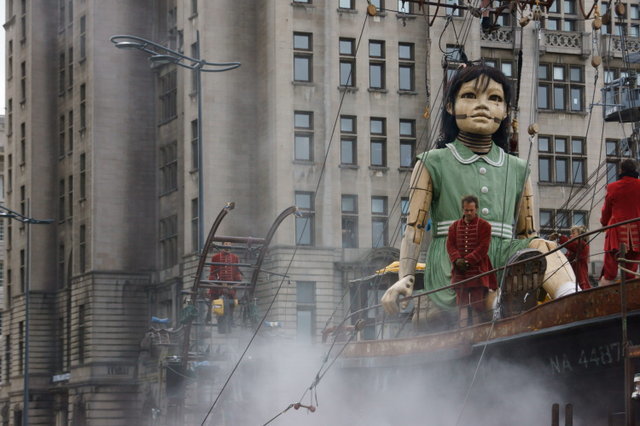 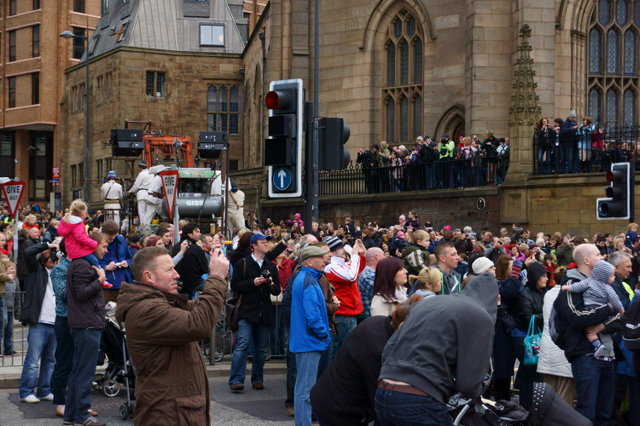 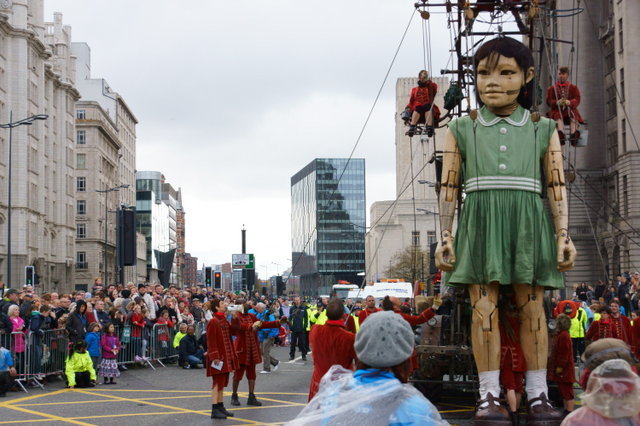 Actually, in my opinion, this is a grand idea, wake up in a whole new world, and let those who surround you do not like you, but nevertheless, it is a world that is interesting to know in which other laws, other values, a kind of escape from reality, though not for long. 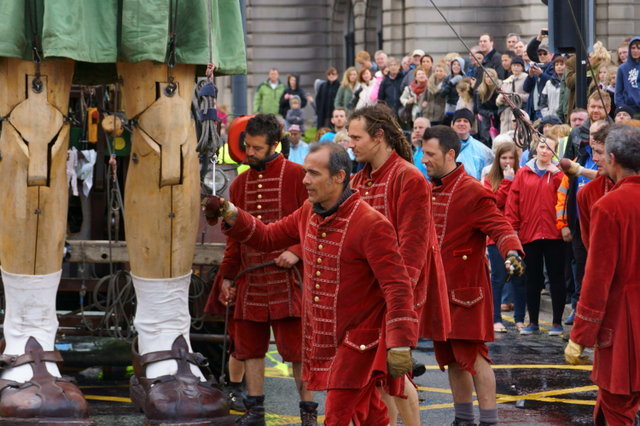 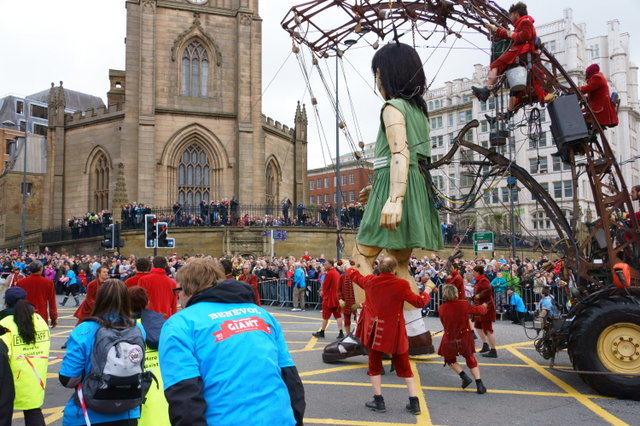 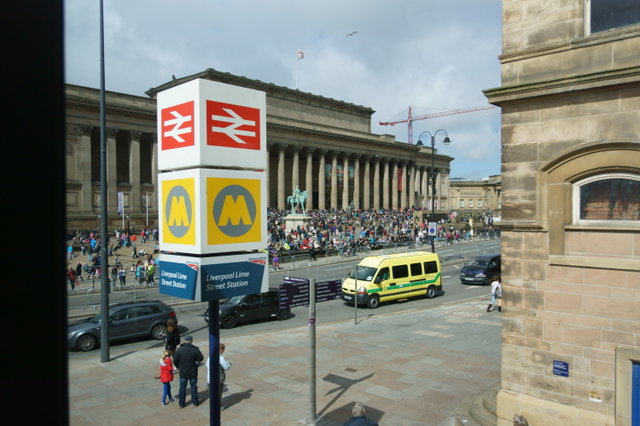 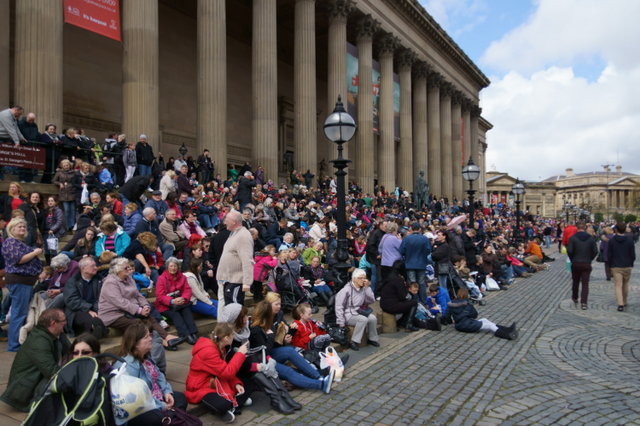 The kids have chosen all lampposts, I've seen only on post-revolutionary photo. 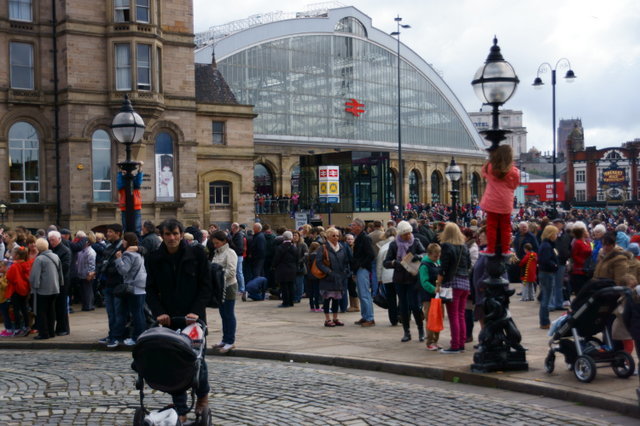 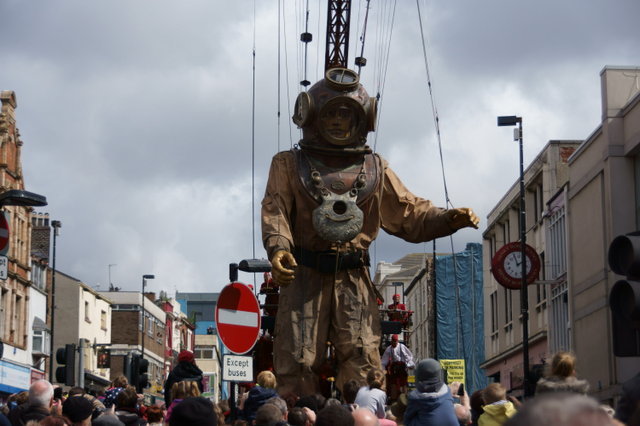 With the advent of giant diver, all incredibly revived, began to clap their hands, snapping cameras, scream, jump, was incredibly nice, felt an incredible surge of positive energy. 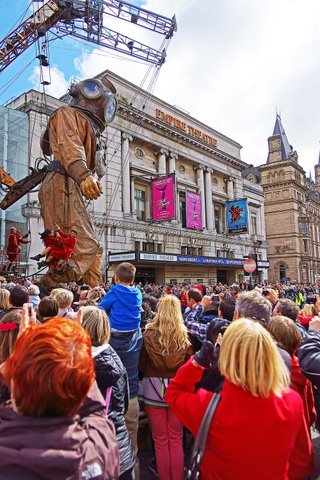 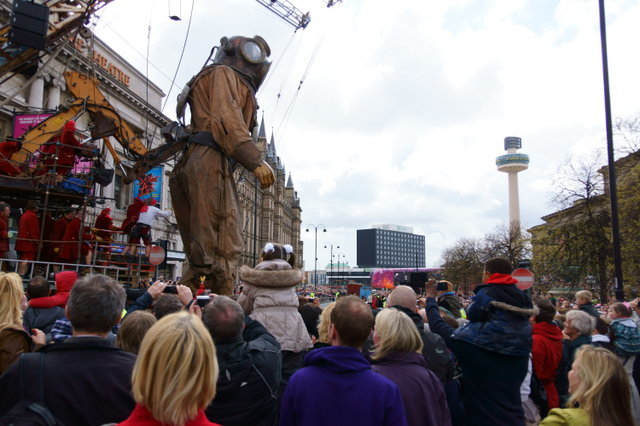 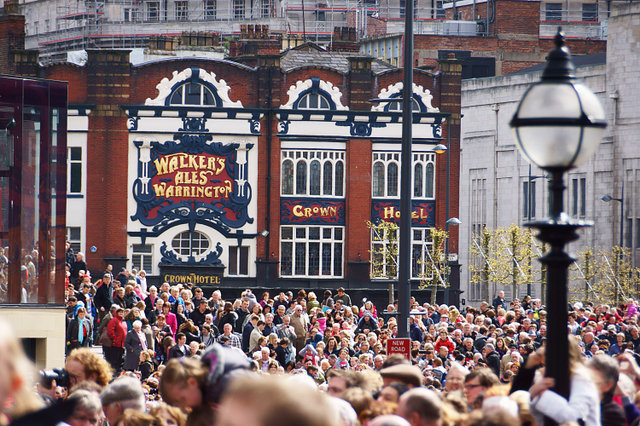 Diver turned to the central railway station, and sat down on the fatigue pre-prepared for him kanteyner, the show there was a break, the Giants also need rest. 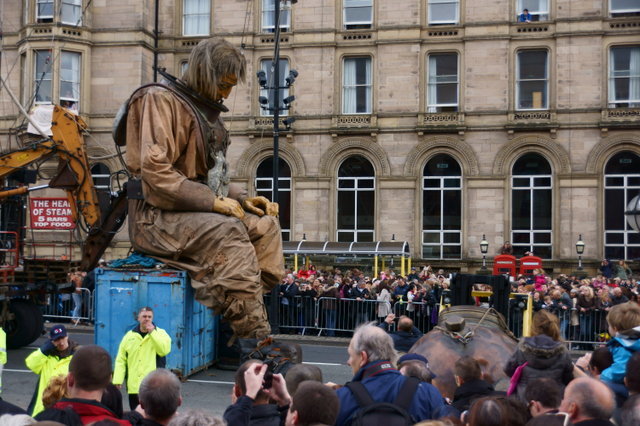 No one wanted to leave, everyone was cool to hang out such a large company. 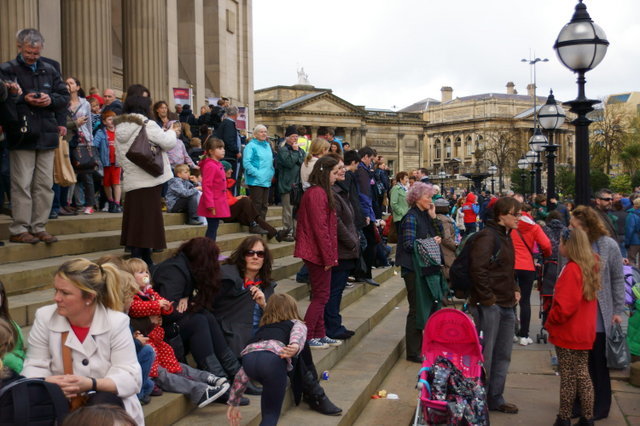 I, too, relaxed and already thinking about how to begin to move, but then I heard behind ominous footsteps approaching, I was scared to look, but I did it, there was the same vampire who Nedopil my blood at the very beginning, this time he took with him the handcuffs that would be easier to fix me, goodbye. 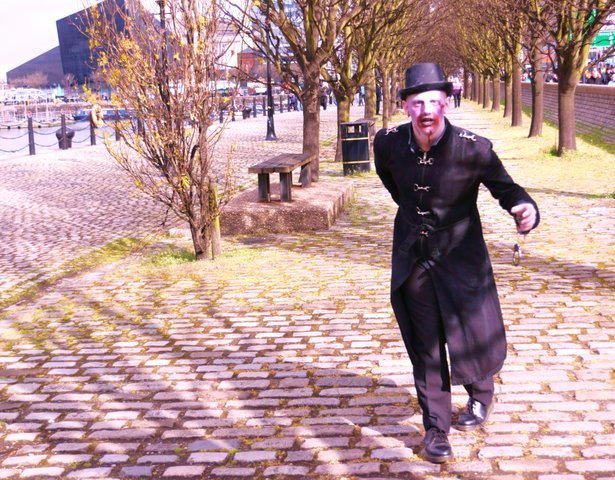