United Kingdom
In London now conduct special raids on each bike party. Police arrived with his camper, catches volunteer cyclists and invites them to stand up and sit in the cockpit. 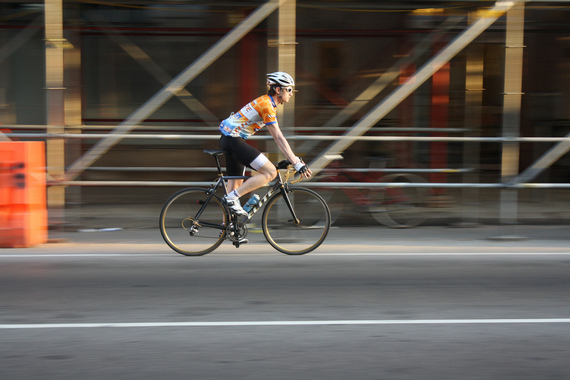 At five o'clock in the evening I go down to the locker room and ten minutes from the office worker trying to turn into a London cyclist.
London cyclists - it will not huhry-muhry. They fly around in their gleaming chrome bikes made ​​of aluminum, carbon fiber and other space ultralight alloys. While Amsterdam cyclists safely ride through the picturesque bridges to its scenic bike models "eternal" and "grandmother", London cyclists, clad in light green lycra and electrified traffic light red, tensely waiting, keep your feet on the pedals and start to break down faster than the neighboring yellow "Ferrari" . Across the city conducted covert battle: everyone tries to his bike was the slick - light, agile, unstoppable in his grace, Morgan bright halo in the night fused with his rider together. Bankers and top managers spend five thousand pounds to get hold of myself lean another diet tormented chase carboxylic fashion. 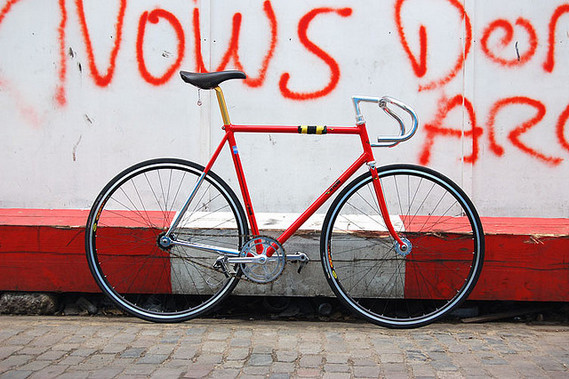 A friend of mine did not fancy: he thickish tires mountaineer, too direct steering wheel, pedals, which lacks the legs. At traffic lights where I start racing later slender Carbonari - is somewhere between the "Ferrari", nervous black kebami and "Porsche" of the middle class. A friend of mine for a couple of zeros price lower than that of many other two-wheeled creatures, his circuit without a protective device, it is safe and ready to spend the night where have - without the risk of being stolen. 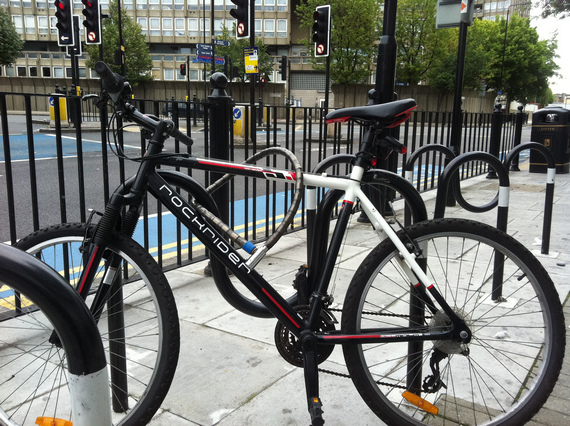 My bike
At five o'clock in ten minutes, I'm out of the locker room, dressed, as expected, in indecent tight lycra. Slightly more than half an hour to drive fast in the city - and Lycra ceases to be a subject of a strange urban fashion and takes place continuously refreshing shower she vents, the heat, the sweat dries. (But the shower after a long trip is still needed, the benefit that in many office buildings it is).
My way is through Hyde Park, where specifically for bicycle isolated and marked a few tracks, and right after that - by Green Park and Buckingham Palace, around which, as I learned to ride without a bicycle wings is dangerous: its cavalry horses Majesty from time to time all the way to undermine their cavalry surprises, and without mudguards in the places of their lycra skin is better not to risk it. 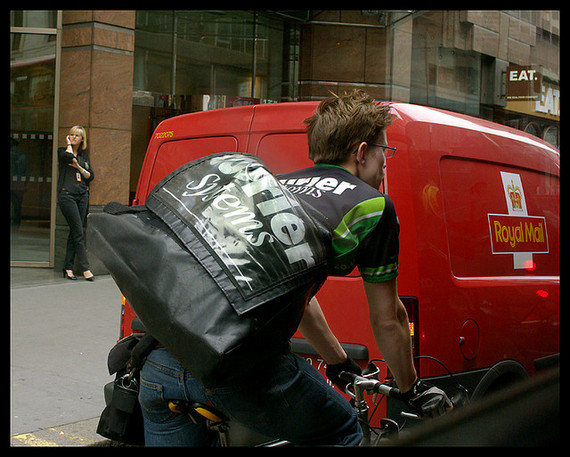 Trafalgar Square - a chaotic transport ring and tourists from all sides. Then a few kilometers along the waterfront and quiet, if you want the dynamics of the Brownian motion, then right through the City: the people at rush hour there continuously thrown under the wheels, cross the road in all directions out of the pubs on the right road, rush to the subway, talking on the phone and catch a taxi. Then, after unrest City, my way again released by cars and pedestrians and goes east on blue, specially built and advertised track called "bicycle superhighway CS3». Exempt from cars - yes, but not from the bike does: Feed two-wheeled friends here becomes the most condensed, saturated and bilateral. At the traffic lights Pole courier with badly scratched face tells me how at this very track someone from yesterday's counter-flow accidentally dropped it with a bicycle on the face of a beautiful blue coating. "Be careful, they're crazy!" - He shows cyclists across the traffic lights. 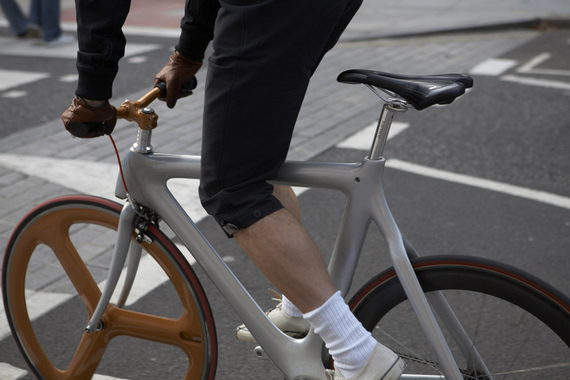 Still, the most dangerous in the city is considered a left turn: he is in all the newspapers, on TV and in the statements of the traffic police. Left turn - the most common cause of serious accidents involving cyclists. For accident enough truck whose driver (do not forget that in Britain the drivers sit on the right and movement - left hand) can not see in your mirrors cyclist, lurking on the left of the car and starts his dangerous maneuver. To prevent accidents, and truck drivers, cyclists and constantly talk about the dangers of the left turn. It got to the point that almost every bike crowd now comes with its own police vans, catches volunteer cyclists and invites them to stand up and sit in the cockpit, while a dedicated cop rolls around. The conclusion from what you see is simple: becoming a London cyclist, are never left to turn left from the same truck. We do not want to read about you in the paper, right? Even if this is my favorite Evening Standard.
What I wanted to say more on the way ... Oh, couriers. These creatures with a bag ready and walkie - real shark on the track. They are always in a hurry, easily and safely wedged in any stream of cars never stop dashing maneuver between buses and rush at full speed among the chaotic flow of people in the City. Recently, I and my friend Sasha happened ride through London with former Velokurjers Harry (here we must honestly admit that Harry's still not easy Velokurjers former, and the former velonarkokurer with unfinished Oxford and a good Russian - in all respects interesting people). All three of us went to Greenwich, but if we have with Alexander of Greenwich separated about three dozen traffic lights, then Harry seems to Greenwich was originally much closer: the traffic lights for him did not exist as a class. At first, he even looked in bewilderment at the two of us, saying, why are you guys, but - here is a lot of space for bicycles?
City of my blue trail directly leads me straight to the house. But compared to the highly technical bicycles from pure carbon I come to the finish line today fifteen minutes later than decent London cyclists.
Next time, perhaps, to tell you about Borisov naked bikes and cyclists, as well as on how to forcibly make the city bike.
Author: Андрей Козлович