AdBlock detected. Site operation may be disrupted due to running AdBlock. Please disable it for this site.
Home Stories United Arab Emirates 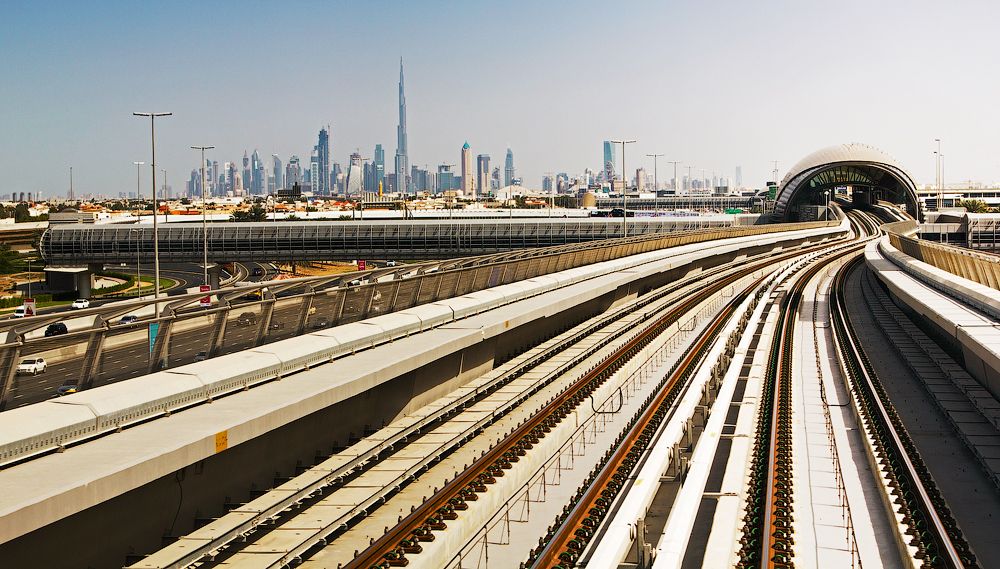 In one of the hottest days I decided to explore Dubai's infrastructure, and in particular its transport sostavlyayuschuyu- subway. Therefore, I sat down on one of the end station and drove across town to their hotel, which was almost at the end of branches. If Moscow had the same beauty of the underground, I would hang out every day in it for 5-6 hours :) I suggest you learn more about Dubai Metro and take a ride on the trailer "Gold class" through the city. See buildings on the horizon? Soon we will have to get there! Everyone knows that Dubai Metro - one of the few that is controlled automatically. You'll never see the trains drivers simply because there is no cab :) But there is one very interesting car, which I will talk about later. In the meantime, go down into the subway to buy a ticket! The entrances to the underground larvae resemble the Alliance of the famous Half-life 2, and these shells painfully remind me of shells at the entrance to the metro station "Slavic boulevard" 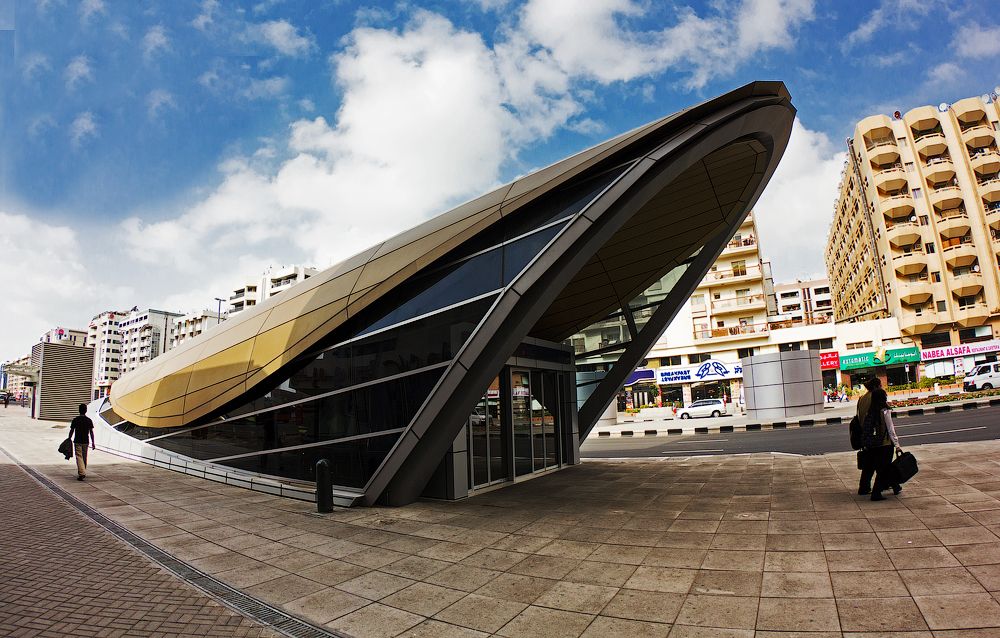 Now it's time to buy a ticket! After some complex machinations combinations I get a one way ticket. Zaitsev is not here, and all because if you pass the desired station or nedoedete to it, you just will not release security or push the turnstile to you my sash. But do not panic! You can always wait for the train and get off at the desired station, then you and miss! 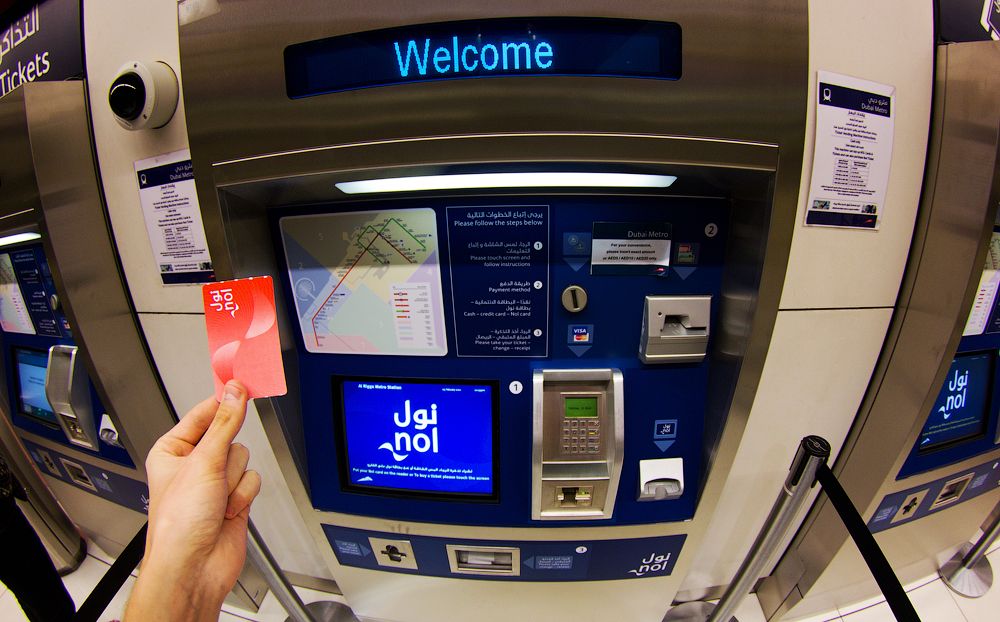 Tickets have two types: "one way" and "two way" - a one-way and round-trip. The price varies depending on the type of car and the path length. I rode in the Gold class from one end to another for $ 6. And now tell you that I was impressed. At each station there's such boards, here you can share your impressions about the trip. Mats and bawdry noted. Needless to say, what would happen to this board, if it were placed here in Moscow? I humbly wrote the address of the LJ .. 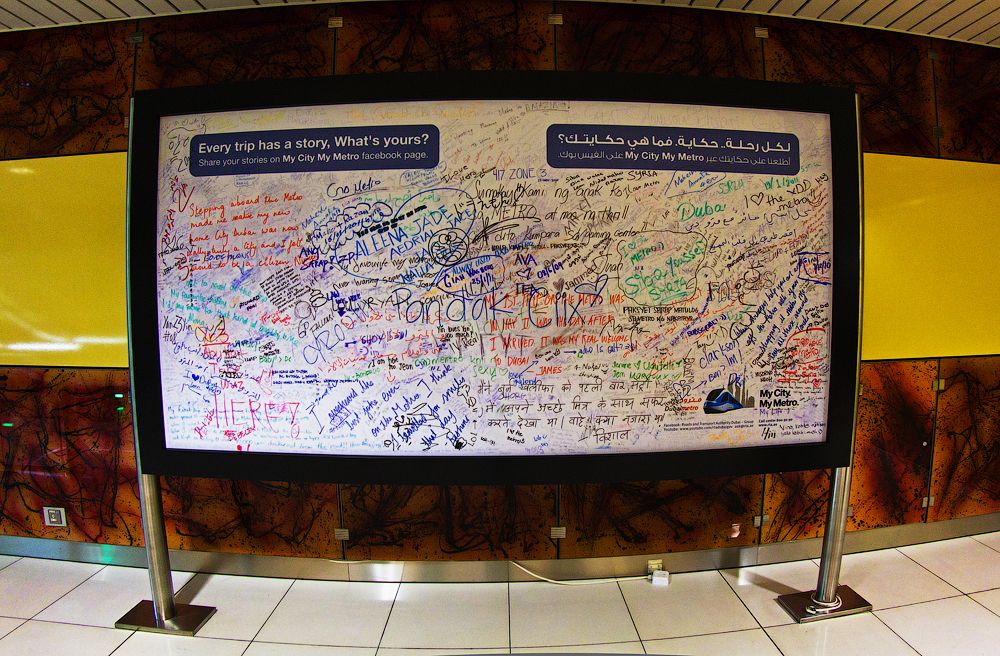 Looking ahead, we will show how to look my station "Al Rigga"! The left and right elevators are installed, so you will not descend on the escalator and reduce the time for the descent! All stations are very beautiful and gives them a perfect gloss! 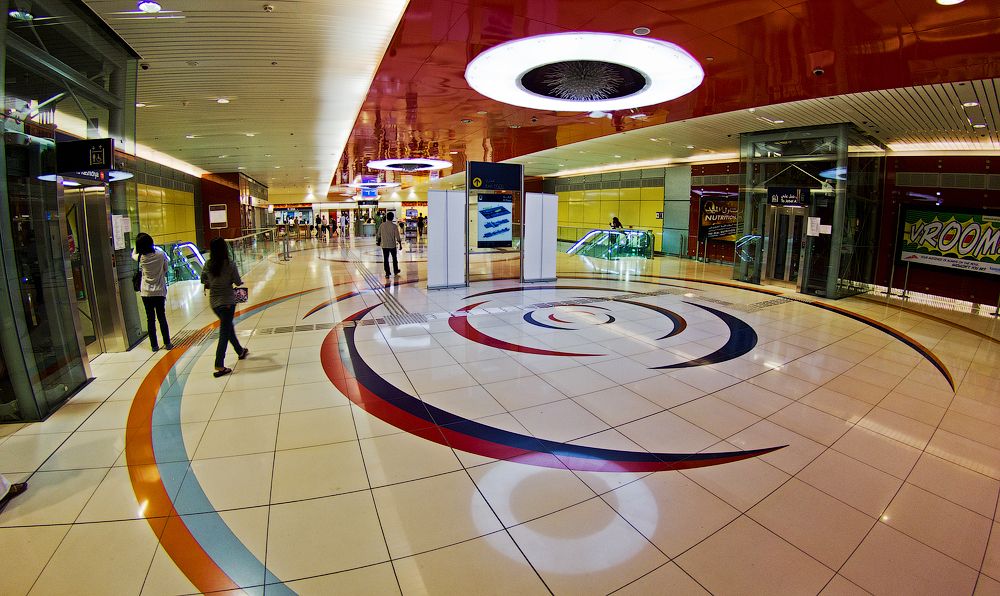 Dubai Metro scheme: in fact, the two branches only functions however Red, Sokolniki. I went to the station "Dubai Marina" (that about Palm Island-hard not to notice) to the station "Al Rigga" 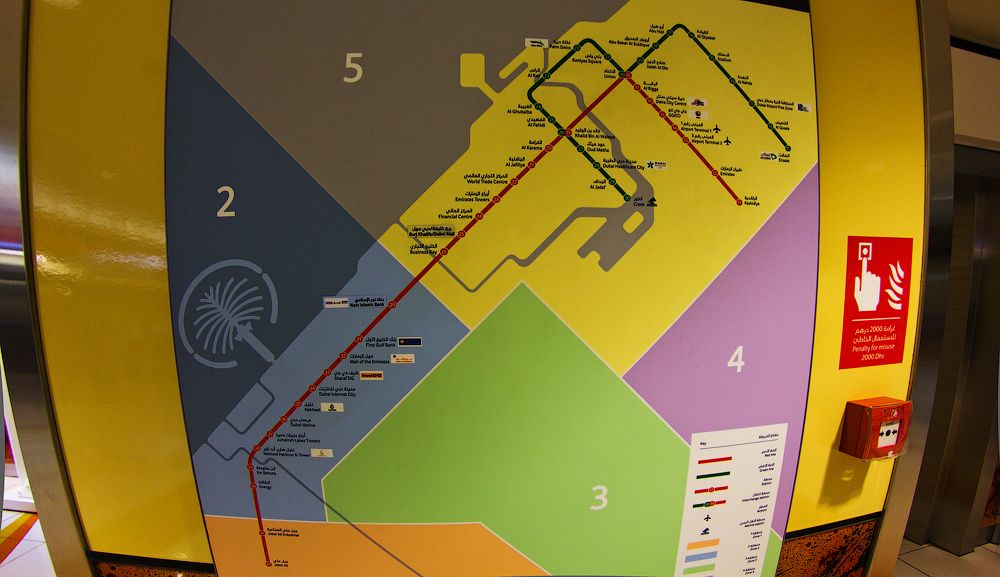 2 escalators, and all are on different platforms, so do not mix them, otherwise would have to go up and down! Now, about the division of cars: a total of 5, and each is different. The first luxury wagon Gold class, because you can look into the windshield of the city, there is more spacious. The rest of the cars for women and men workers. The platform is on duty security guard who checks tickets. If I had not bought a ticket on the Gold class, I would not have him go! Trains run every 5 minutes 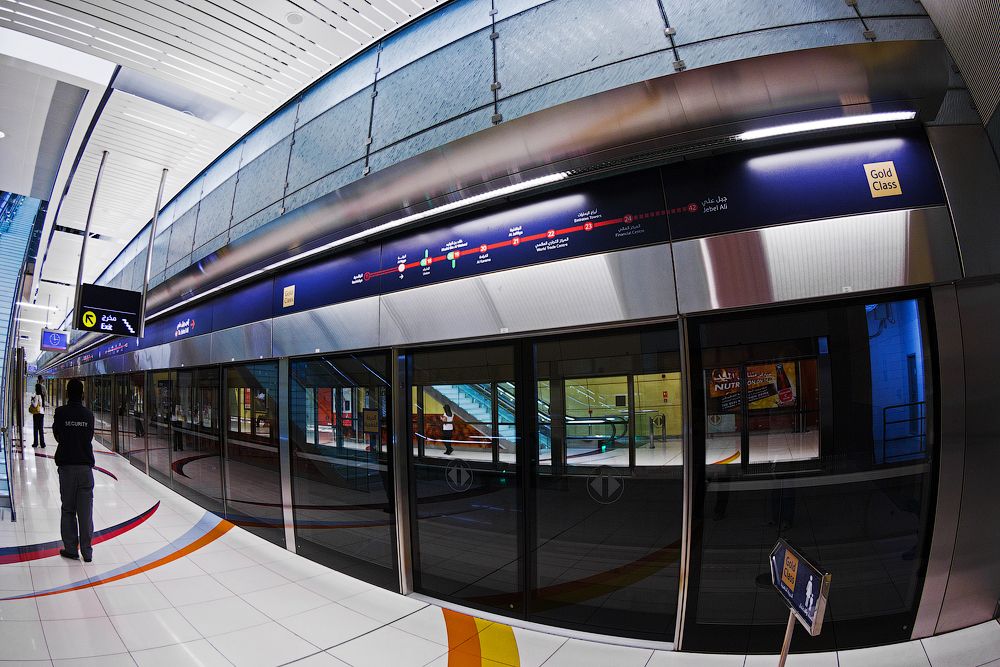 Remember how I admired his Fish? Now I hate him, because correct distortion practically useless, so it's better to these pictures than nothing :) 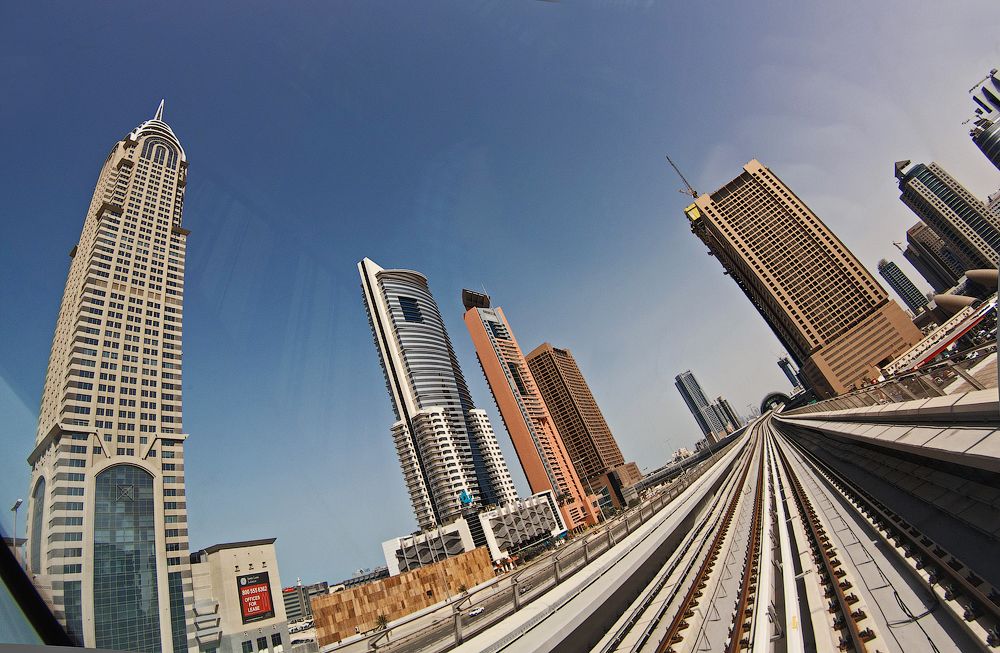 This is, roughly speaking, the outskirts of the city. Hotel "Burj-al-Arab" is still far from us. It is worth noting that not only I wanted to take a look through the window at Dubai. I had to politely push two people and occupy a central position 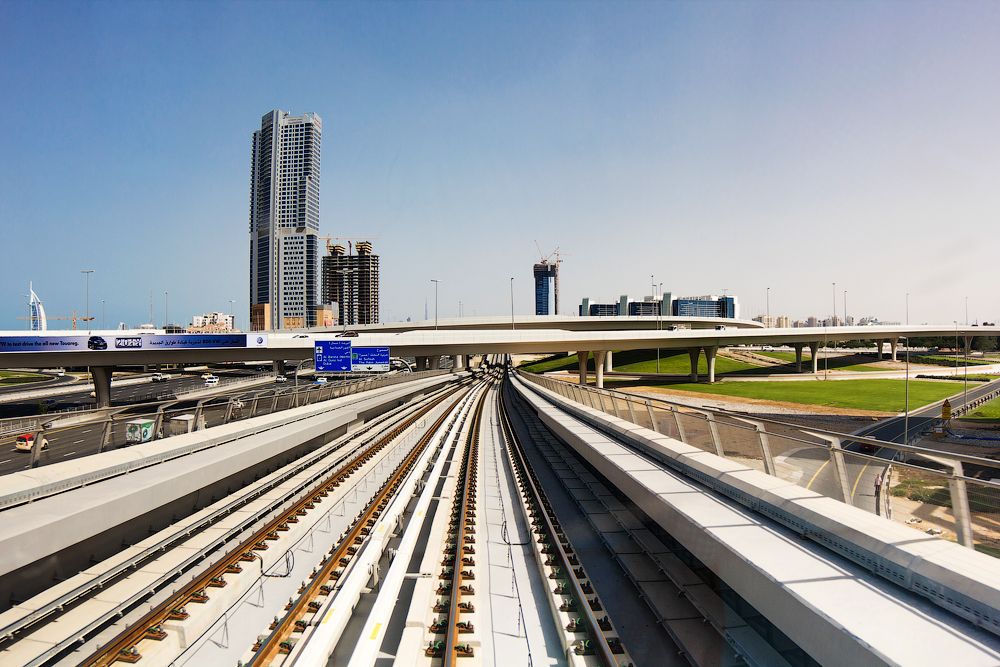 At each station located transitions 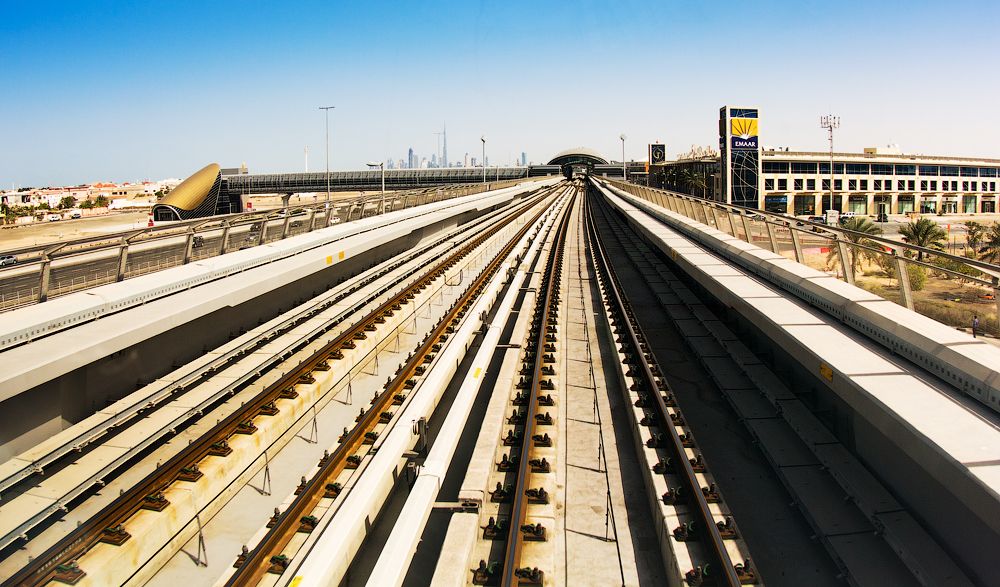 I had a fetish for photographing transitions, to which all too stylish and beautiful! 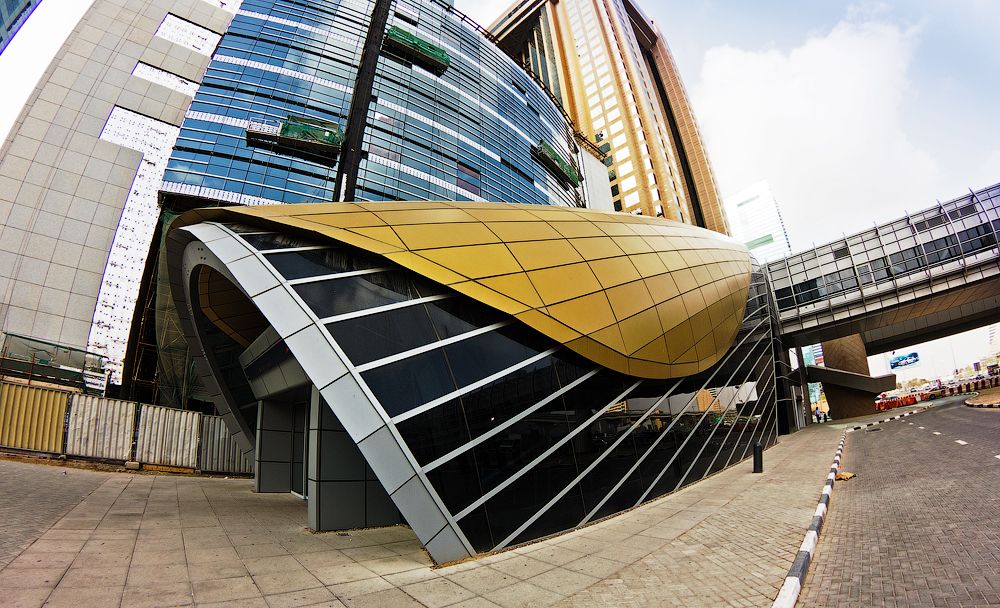 On our way- area Knowledge Village, there will soon be built elite universities 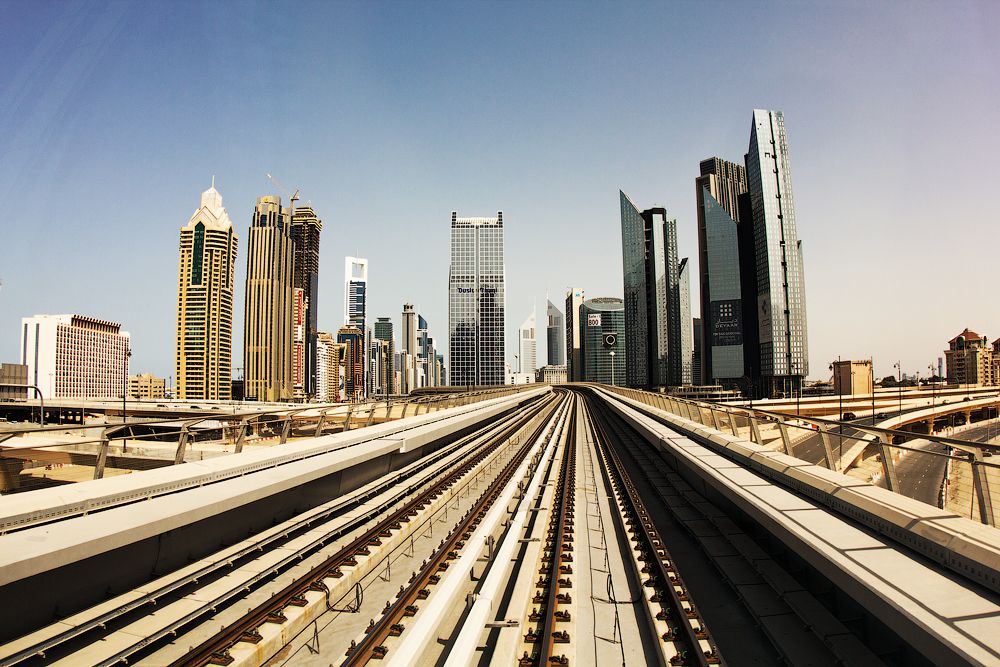 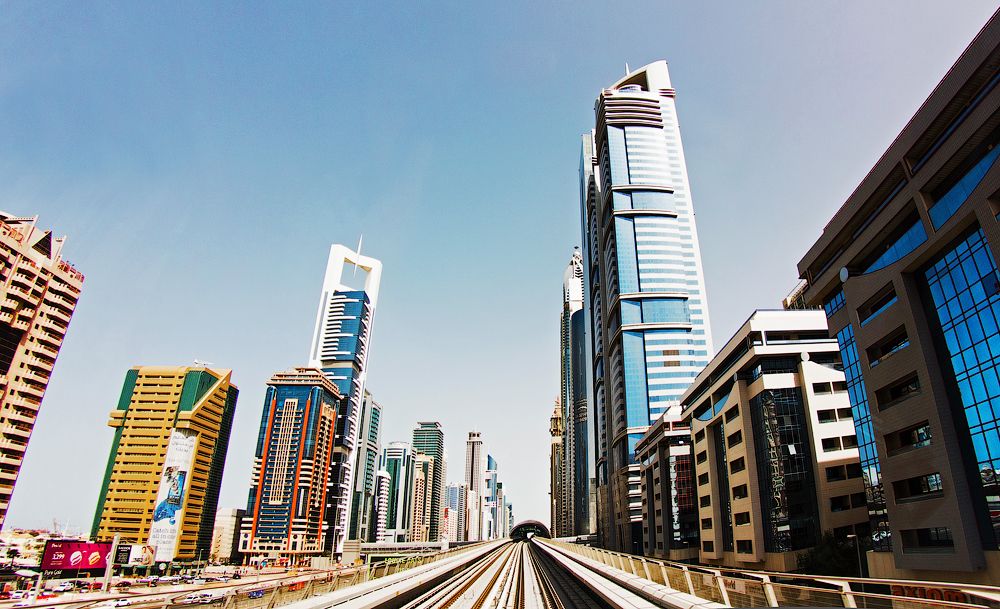 Forgot to say that in the carriages perfect air-conditioning, and broadcasting is done in 2 languages: Arabic and English. First, speak Arabic, then on anglyyski. The procedure for this, first declare the station, and then warn the doors are closed, and in the process the way resemble what will be the next station 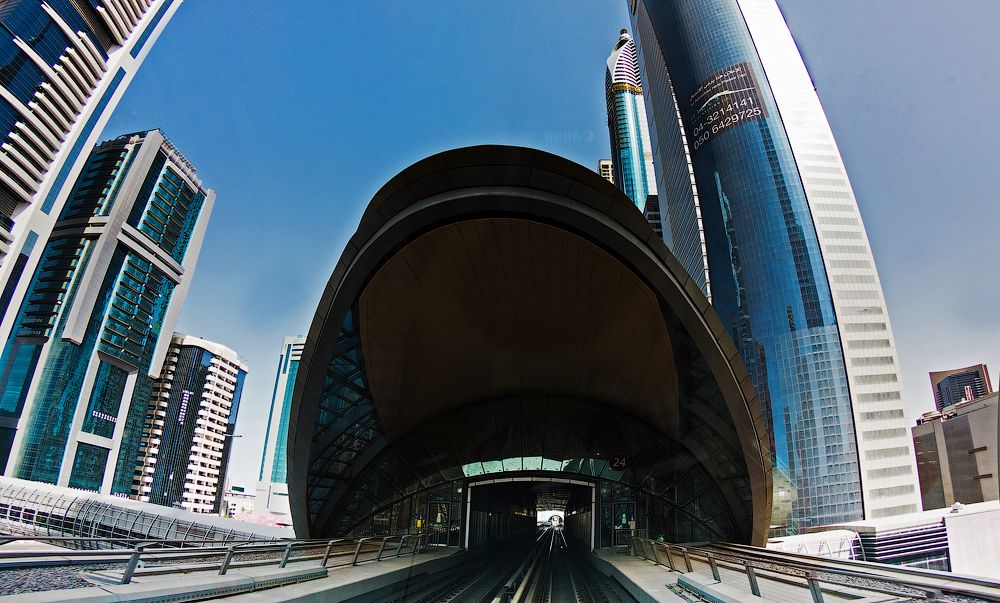 Get on the way- no problem, there are stairs everywhere and low fences. But why, when everything is so beautiful and can be seen through the windshield? 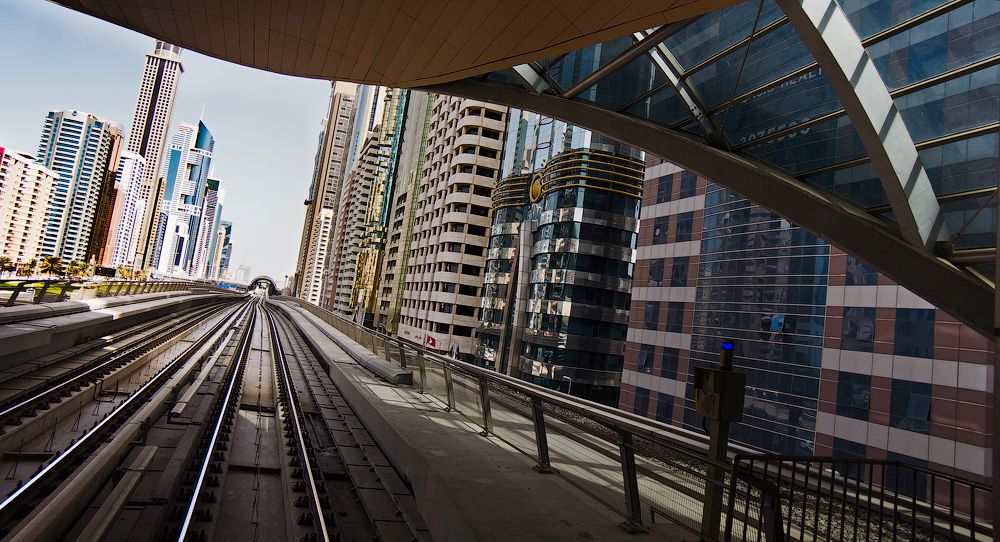 Closer to the center. As I found out later, most of the buildings is quite zalezabelnym, and I will not miss the opportunity to win some skyscrapers when to come back to Dubai again 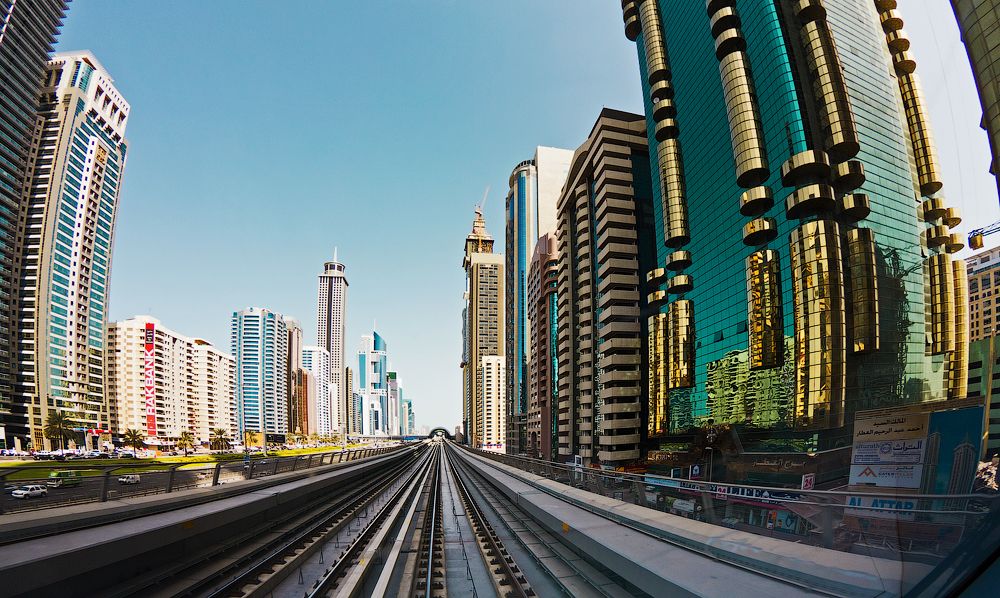 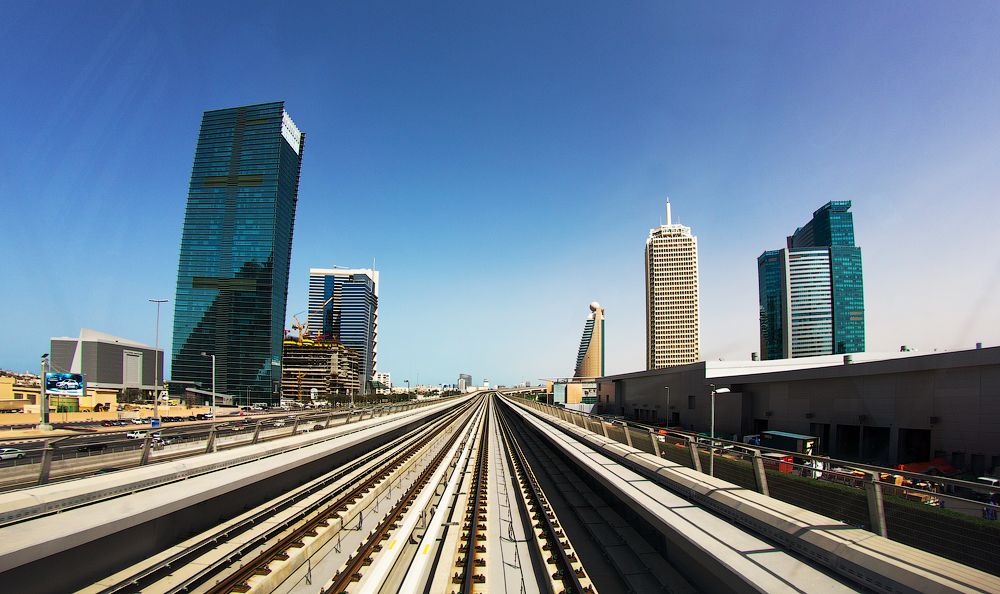 I would take pictures interior of the car, but too unkindly looked at me office workers .. 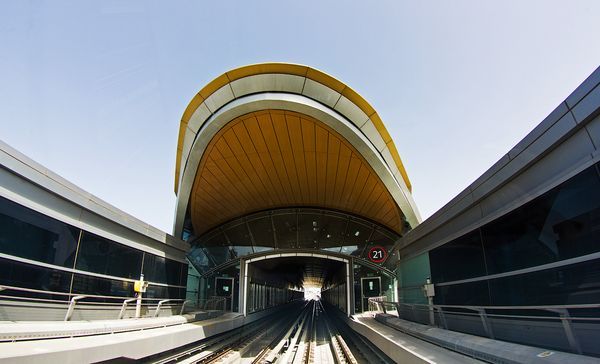 Approaching the Al Rygge, we descend into the dungeon. Here is where we need a full frame! I pulled up to ISO 1600 and tried to take the inside of the tunnel 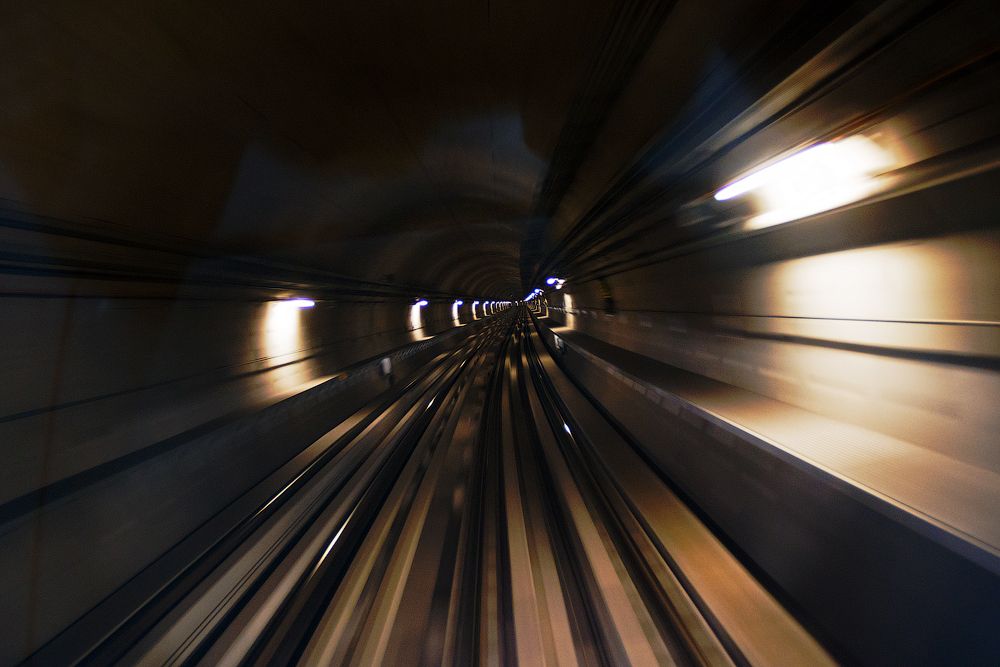 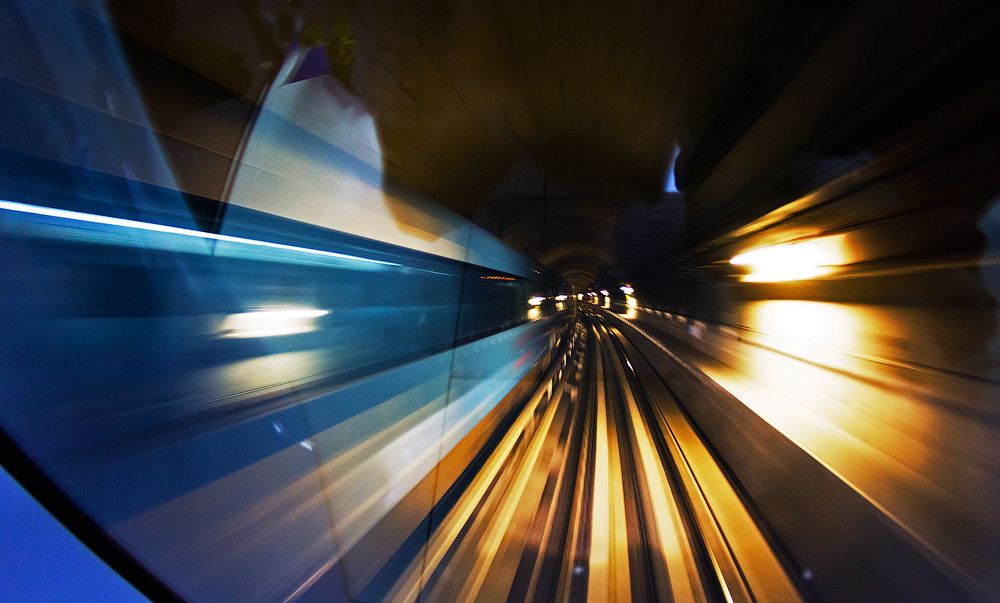 And here is the native Al Rigga! Way from Dubai Marina to Al Riggi took about 40 minutes and I dare declaring that our subway much faster Dubai! 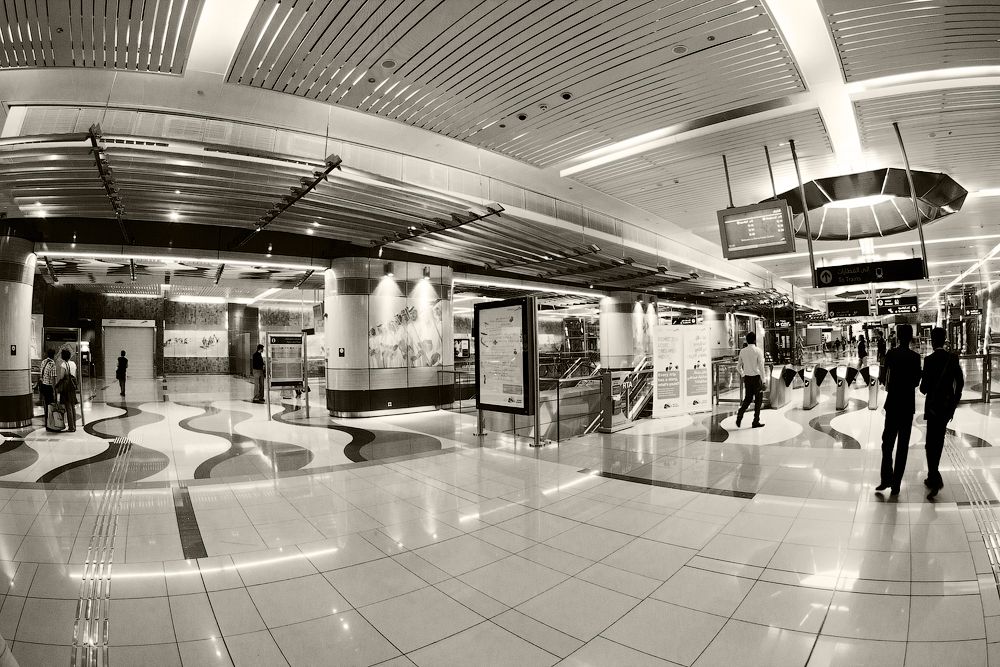 This is a little offtopic: the most beautiful entrance to the subway station was "Union" 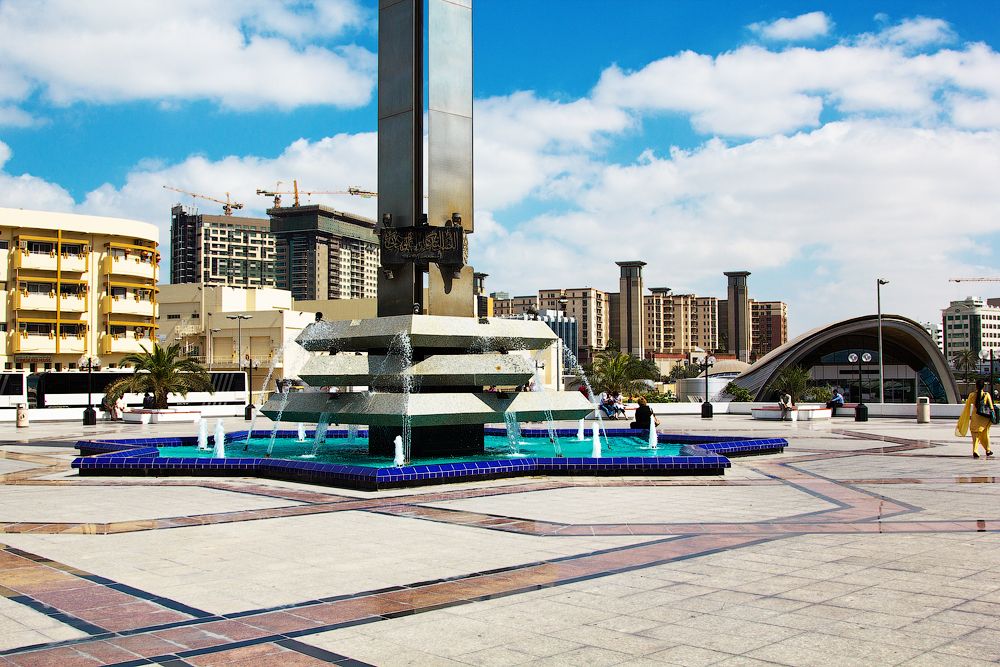 Metro I definitely liked it, but worth thinking about her fate. 5 cars headway 5-7 minutes .. What will happen when the population of Dubai will increase? Traffic jams happen. But Dubai does not rest on its laurels and is expanding, so I hope that with the traffic situation will be all right!
Thank you and see you soon!