AdBlock detected. Site operation may be disrupted due to running AdBlock. Please disable it for this site.
Home Stories Turkey

The siege of the ancient walled cities often rests not in fact whether the besieging party to break the wall under a hail of arrows and throwing objects other defenders of the city, not in a tunnel under the wall, and a completely different: it was just for a while to cut the defenders of food and water and if the besieging army supplies were more attenuated garrison there was little he could oppose the attackers. The longest siege of the fortress lasted for many months, for example, Kenilworth Castle in England was precipitated as much as six months while in the lock does not run out of food and water and simply began sea. One of the longest sieges was the siege of the city of Famagusta Cyprus (which was very famous resort, and is now in the demarcation zone) 50,000 Turkish soldiers of Sultan Selim II, which was precipitated by the Venetian garrison besieged by 7000 11 months starting in October 1570 and did not were able to break through the defenses: the retreat of the garrison was all over because of depleted stocks. Itself, was a long siege of Candia (now Heraklion) in the same Cyprus: Turkish army needed there in '21 - from May 1648 to September 1669. In order to maintain the life of the city under siege, it was necessary to maintain the supply of drinking water. In Istanbul, for it was built a network of reservoirs and one of them, the Basilica Cistern, built in the year 532, now renovated and is available to the public. 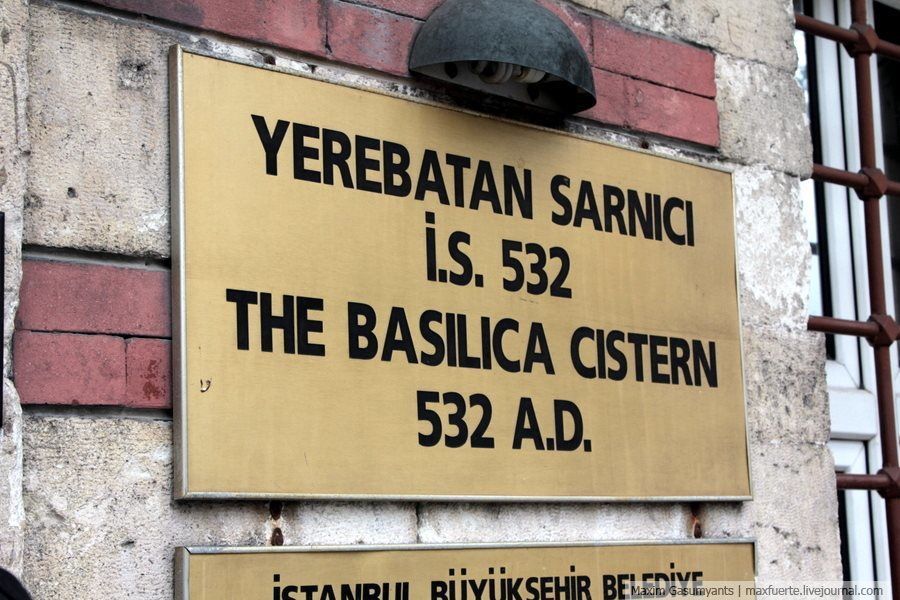 The most famous view of the tank - opens immediately with a staircase that leads from the main entrance. The reservoir consists of a rectangular space. The total area of ​​the reservoir - 9800 m, length - 146 m, width - 70 m., Displacement - 80 thousand cubic meters. The arches of the tank based on 336 8-meter column. Columns are located in the "right" geometric pattern in 12 rows and 28 columns each. 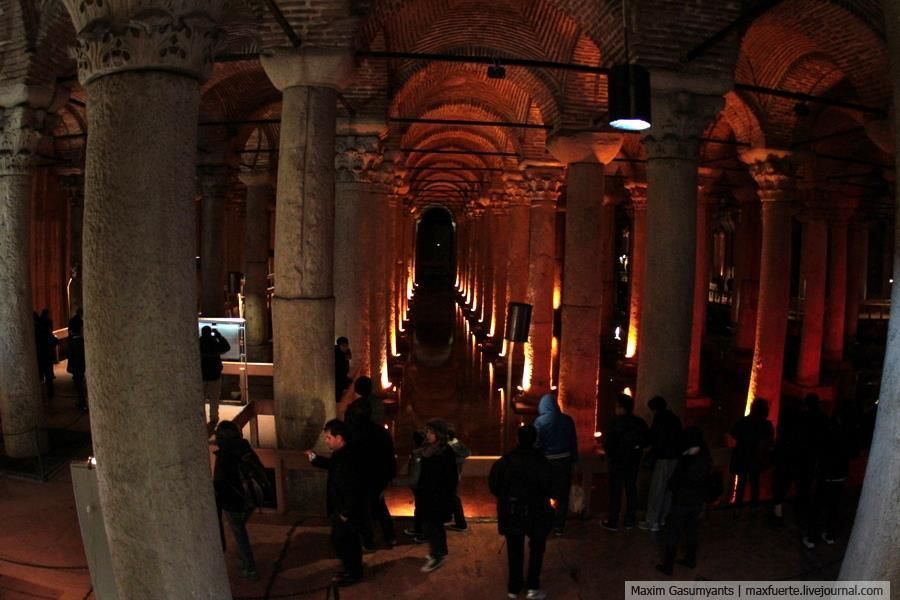 As you can see the tank filled with some water. The water is clean and clear, and there are swimming fish, the bottom of the tank sometimes strewn with small change (probably because tourists are trying to lure fish). By the way, just say she pointed to the existence of these underground structures - when in Istanbul built water, forget about them and only when someone is interested, from a local resident fishing through a hole in the floor, they reopened after renovation: tanks were littered. 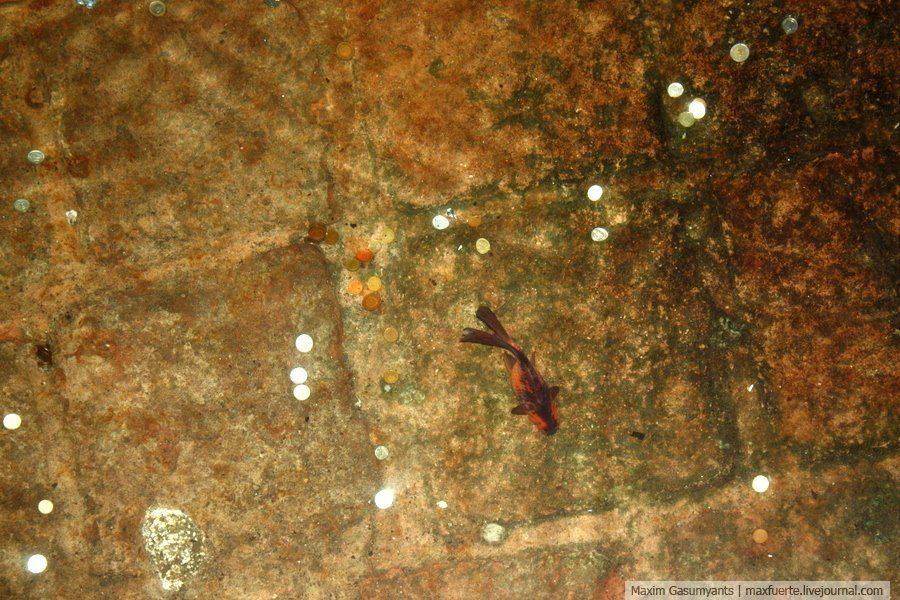 The water in the tank was delivered from sources in Belgrade forest near Istanbul (located in the mountains, is named after the siege of Belgrade in 1521 by Sultan Suleiman I) of the two aqueducts - Valens and Maglova first had 971 meter length, the second - 11,545 meters. In our time in the reservoir lodged another monster - Il mostro della laguna, a monster who appeared there from Venice Lagoon, described Alberto Toso Feem. Monster like a snail the size of 6.5 meters in length, 115 centimeters wide and 110 centimeters tall. Monster automated and team of different specialists gave him a voice, movement and lighting - from a distance and in low light you might think that there really is a big snail. 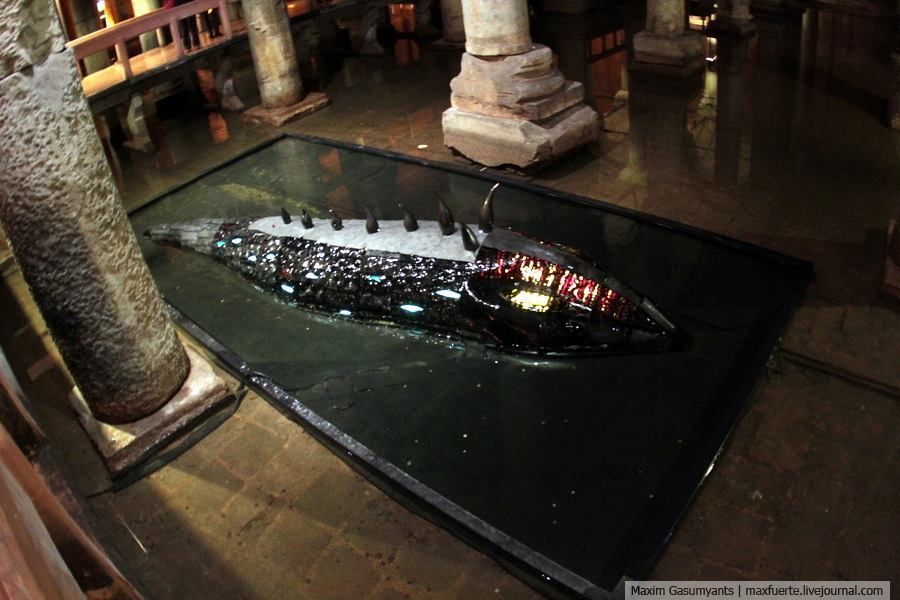 During the construction of columns to use all available materials (including columns of ancient temples), which were brought from across the country (at the same time to gather materials for the construction of the Cathedral of St. Sophia), so their shape and appearance are quite different, and the material of columns there are very different - granite, marble and other materials. For example, there is a column "Peacock Eye" - it's all painted with peacock feathers and low from the base there is a hole. There is a belief that if you insert your thumb into the hole and will be able to turn it around 360 degrees, you'll get lucky. 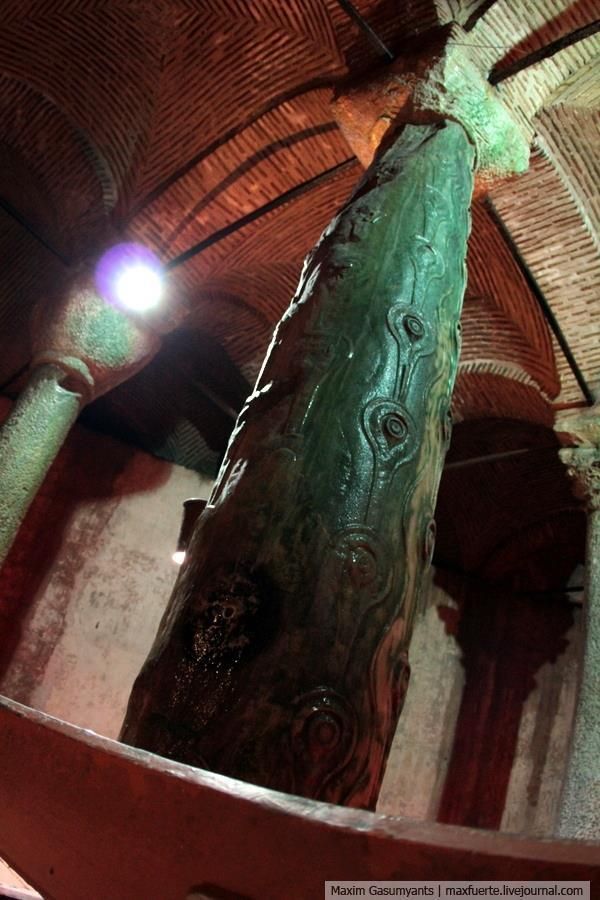 Columns are very different - they support the arches of brick, thickness of 4 meters. By the way, about the sustainability of the facilities (which is under the house) there is no doubt - it even survived the earthquake of 1855, which erased from the face of the earth half of Istanbul, injuring many of its landmarks, including the walls of Constantinople. Tanker repeatedly repaired - the first time it was repaired under Sultan Ahmet III, then at Abdul Hamid II, replacing the column and build a wall in the center of the room, to reinforce it. 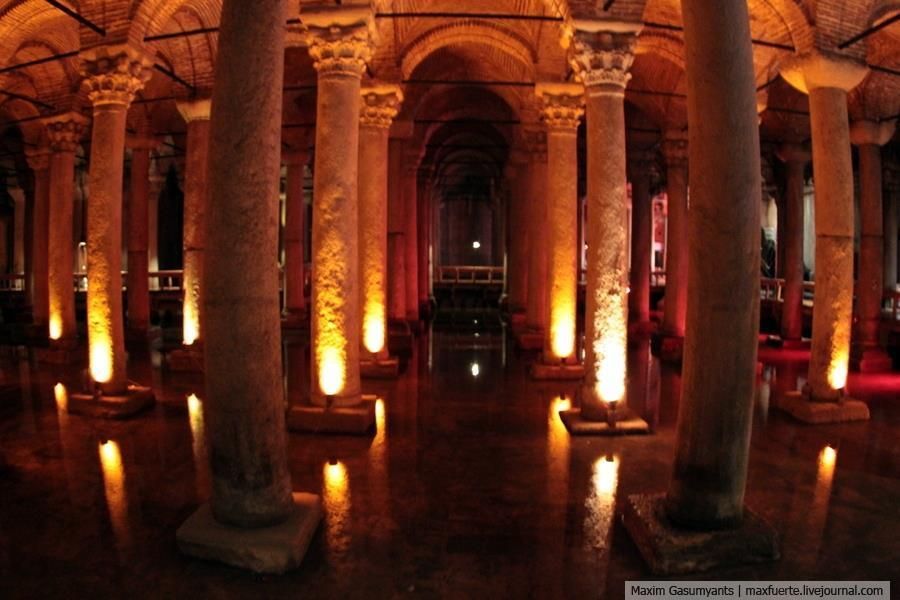 In the most distant parts of the tanks have two more interesting columns, as grounds which are used inverted head of Medusa. There's also arranged a small indentation and can be visited at the bottom of the tank. Where there appeared the head is not known, it is believed that they were there because of a Roman building (there is no written proof that they were there at the time of construction) and flipped it to neutralize the effect of looking jellyfish. 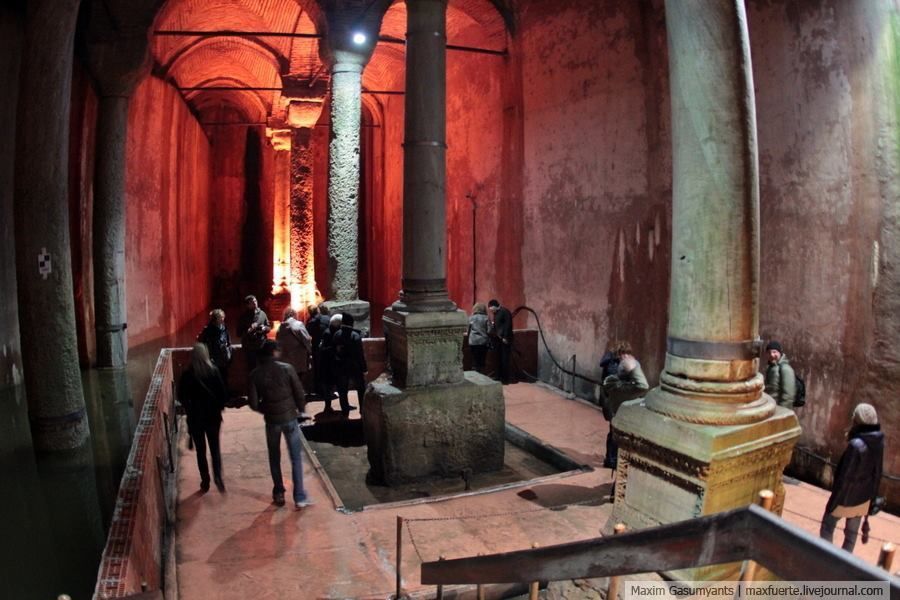 Also in the tank and fill with water floats a huge amount of fish that can be touched by hand. 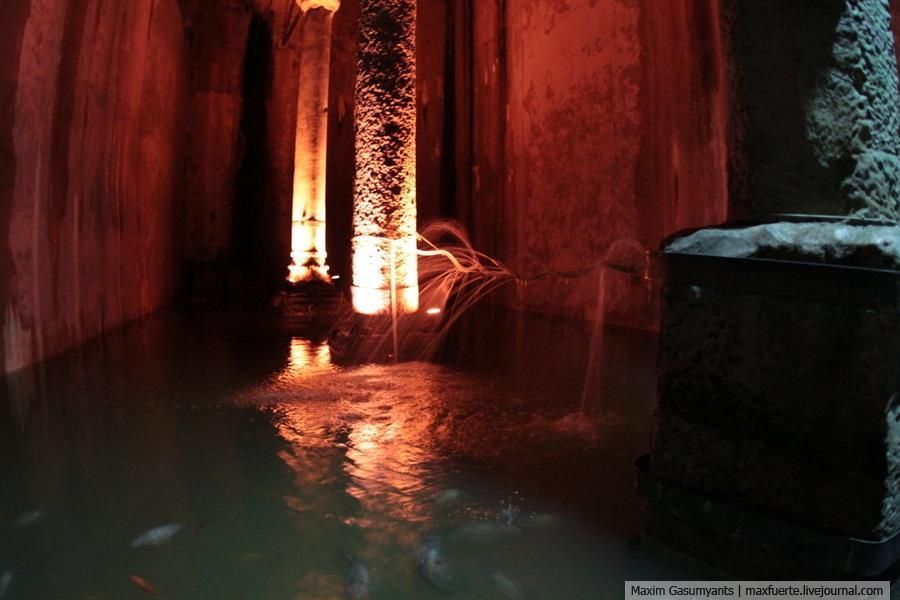 And here is the head of Medusa. 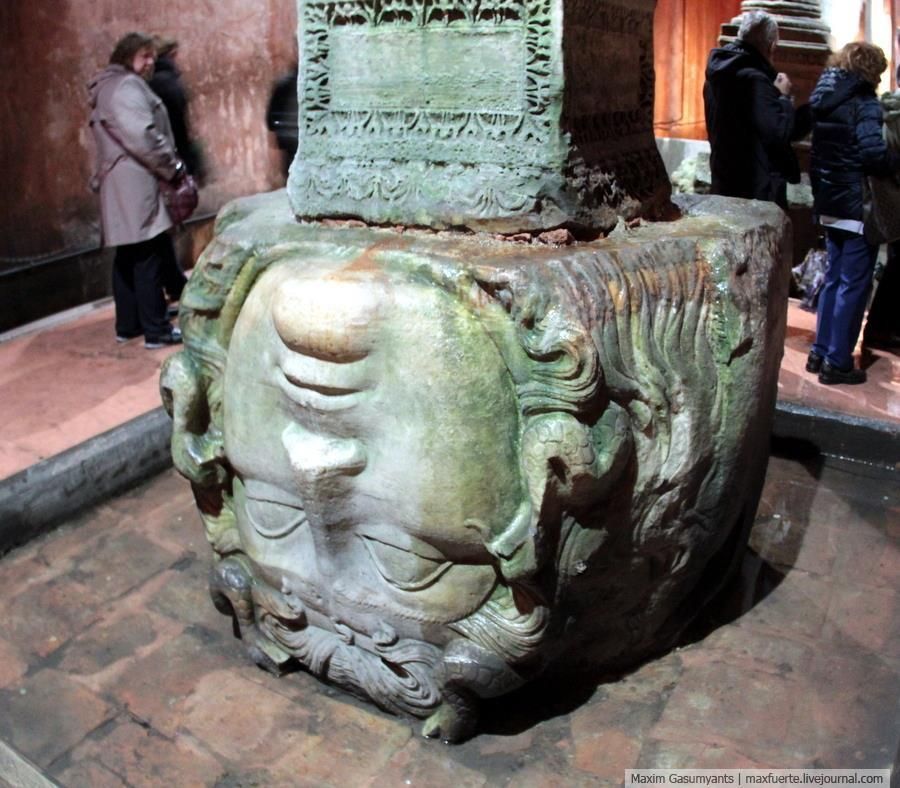 In the tanks there are quite secluded place, where it is very dark. 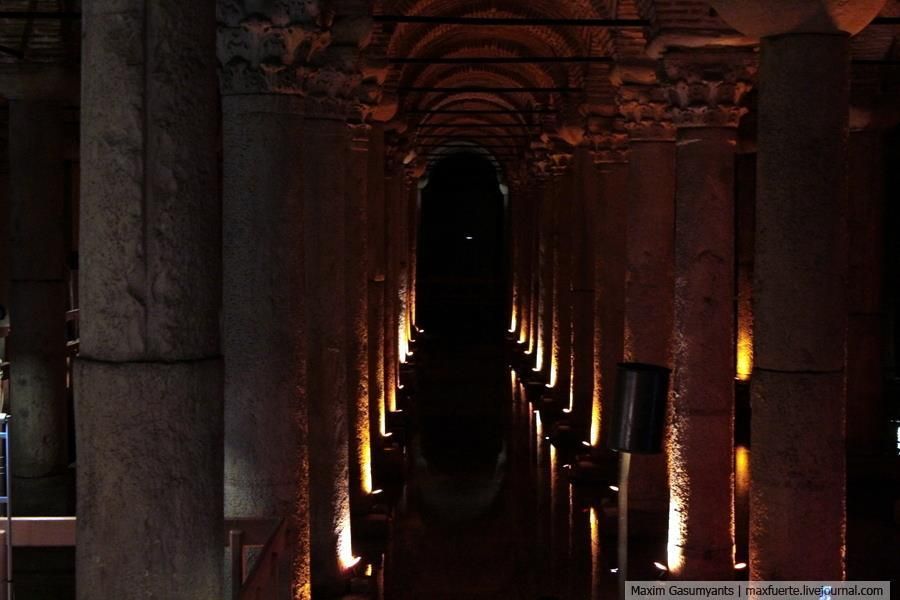 Acquainted with this architectural monument can relax in the café (the sounds of drops, monster and the unique atmosphere of the place). 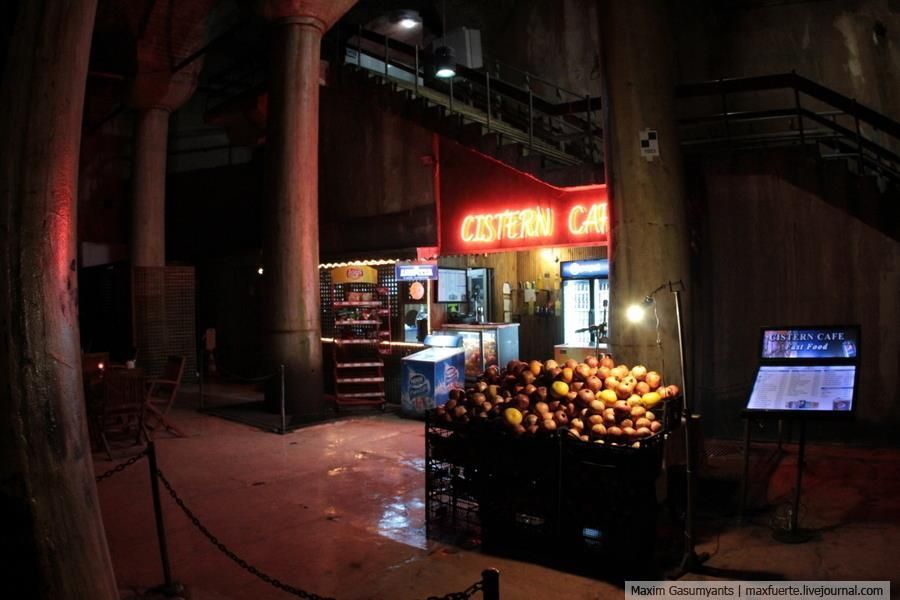 Near the cafe scene is set - apparently held here presenting with fire, probably looks very nice. In the tank a little cool (although in February may be warmer than outside).