AdBlock detected. Site operation may be disrupted due to running AdBlock. Please disable it for this site.
Home Stories Switzerland

Geneva I found at the beginning of the summer. Clean, warm rain-washed, glossy green, unhurried and elegant. Proximity to the border with France creates a corresponding charm patina. French vocabulary, consisting of no more than three words added omnipresent «bonsoir», so it's something I will remember forever ...
In total, we settled in Geneva for three days (with brief trips to Le Brun, and neighbor-France). Of course, this is not enough time for in-depth familiarity with the city, so the only episodes. 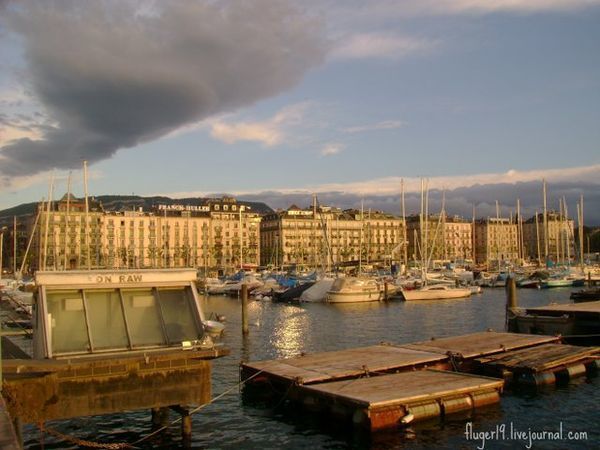 Where there have gone modern ... Geneva Geneva - is the name of a Celtic settlement. The first mention of Ganaveh County (or Genoa) were found in Julius Caesar, in "Notes on the Gallic War", which describes the victory over the Helvetii legionnaires in 58 BC During the Roman occupation the city prospered. In the 4th century BC to Geneva penetrates the Christian religion, the city became the center of a large diocese. Germanic tribes of the Burgundians are replaced by the Franks in the 9th century, Geneva became the capital of Burgundy. Although the city claimed by the rulers of the Burgundians, Franks and Holy Roman Emperor, in fact since the 11th century it was ruled by the local bishop. This lasted until the Reformation, when Geneva became a republic. In the 16th century, Geneva became the center of Calvinism (about Calvin talk about later). In the early 19th century Geneva was part of France, and after the fall of Napoleon's empire Geneva Republic considered the best to join the cantons of Switzerland. Since in the composition remains neutral Switzerland. That is so very short of two thousand years of history ...
And if we talk about the present Geneva - that is the focus of the headquarters of international organizations, nice, cozy town, and, importantly, somewhere near Geneva, on the border with France, is the most mysterious large hadron? fritted call? ... Providers
founded, we in Geneva three blocks from the lake, often referred to as the Geneva. But this is not the only name in the largest lake in Europe (it reaches a length of 73 km, width - 13). Call it a lake Leman from the time before the arrival of the Celts in these places. Lem meant "big», an - «water»: respectively, the name translates as "Big Water". Once he had yet another popular name - Lausanne. 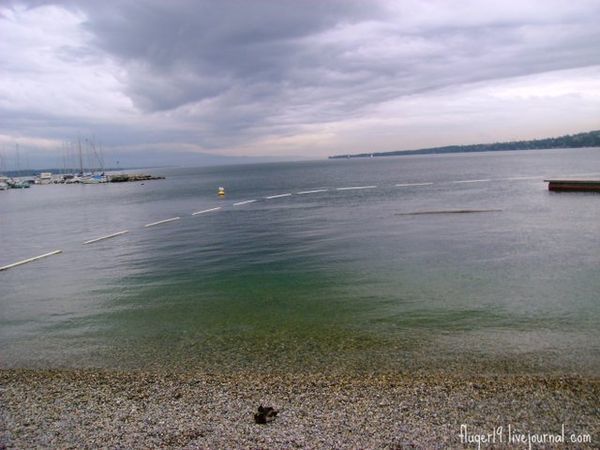 The proximity of the hotel to the lake provoked repeated sorties to him. At first, for a quick orientation used here these sneakers, courtesy wire brushed on some compassionate Genevans (zhenevchankoy) ... 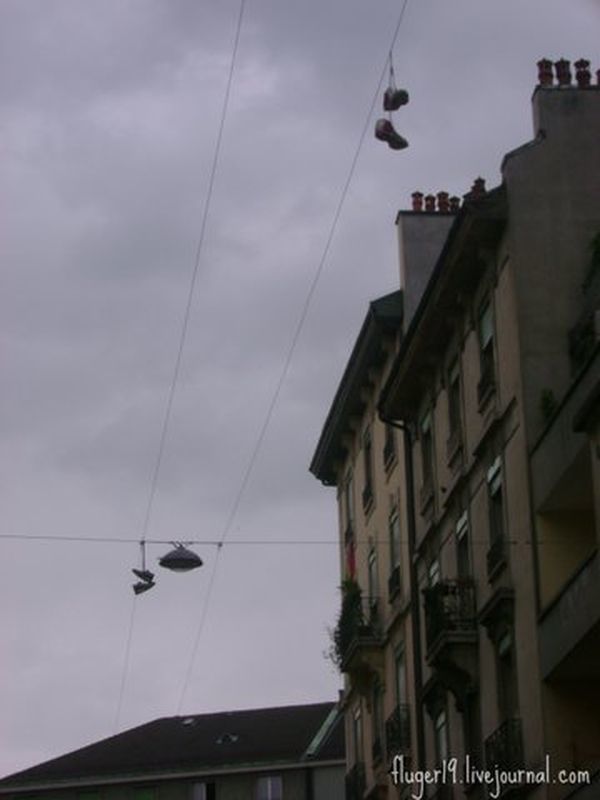 Boats on the lake: 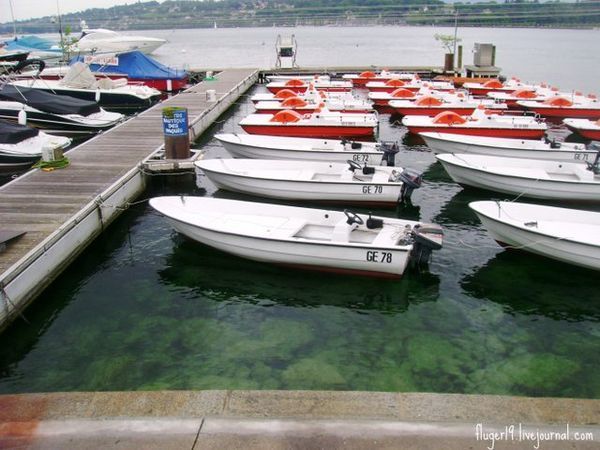 I read that in the summer of 2011 are going to explore Lake Geneva via the famous Russian submersibles "Mir" (those from "Titanic"). Planned 12 research dives during which you can get so much information that it will take five years to analyze them. Scientists intend to find out how human activity affects the state of the lake. Indeed, close to Lake Geneva and a half million people live. 50 percent of the population gets its drinking water from the lake. At the same time, there are many unknown facts about the hard work of the ecosystem on which so strongly affects the human factor. What idea was over - I do not know.
Quinoa is the proximity of people does not interfere, they feel confident here, Therefore thriftily. 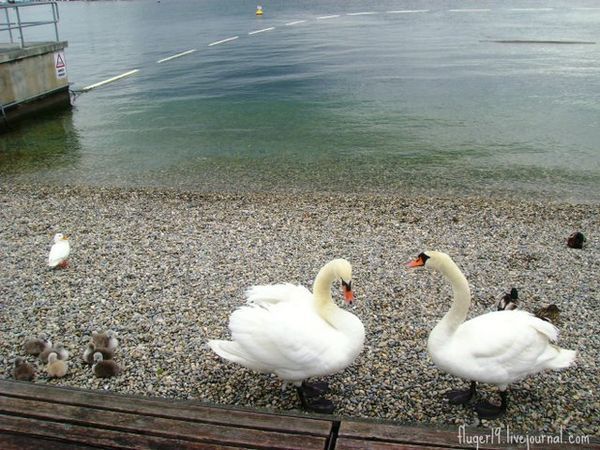 Speak Lake Geneva - Fountain Jet mean-up. It was first launched in 1866 and beat to a height of 30 m., And then, given the widely admired ideas repeatedly been crafted and adopted its current form in 1947. Now a fountain stream reaches 145 meters. Wherever we were in Geneva - it can be seen everywhere. This is one of the largest fountains in the world. 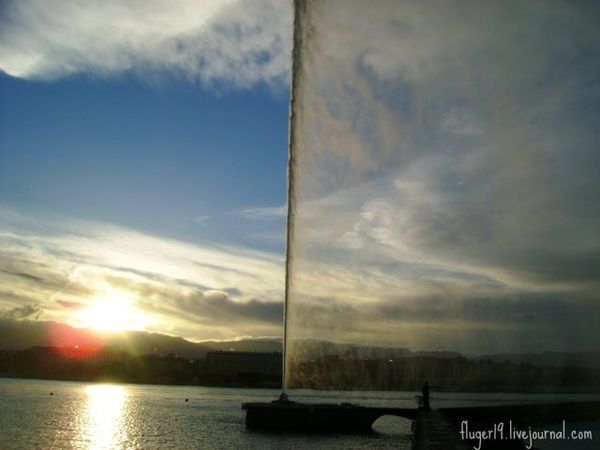 At today's spot fountain installed in 1951 at the pumping station in the lake beneath it to not use water from the tap, as it was before, and from the lake. Since 2003, the fountain is open daily. Guides write that disable fountain only in strong winds and frost. 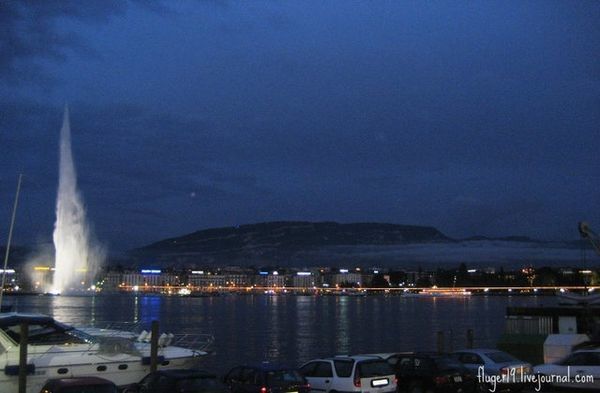 Since we are at the lake, stroll along the promenade of Mont Blanc. By the way, walk along the waterfront were not always safe. In 1898, when the Empress Elizabeth of Austria, who was at that time in Geneva, was sent from his hotel «Beau Rivage» Mont Blanc to the waterfront, it attacked and stabbed a stranger to her fatal blow to a file. In memory of the tragic death of the Empress, who was considered the most beautiful woman of the time, was a monument - a high figure of a woman with a fan and an inscription in gold letters: In memory of the Empress Elizabeth ... 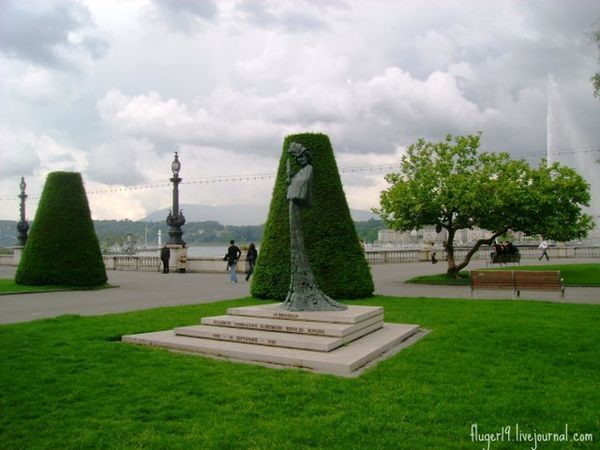 We can not ignore the tomb-mausoleum German Duke of Brunswick. He was kicked out of their possessions, and died in Geneva in 1883. Duke, who suffers from claustrophobia, bequeathed to the city a huge sum in those days of 22 million gold francs. But not just so, and with the proviso that in memory of him was erected a mausoleum and will look after him. The condition was out of the ordinary, besides the Duke had fallen into disrepute and libertine scoundrel. But money does not smell ... and the municipality could not resist. Caring for the monument to this day. Remember the old movie "The visit of the ladies," tells the story of remotely similar? 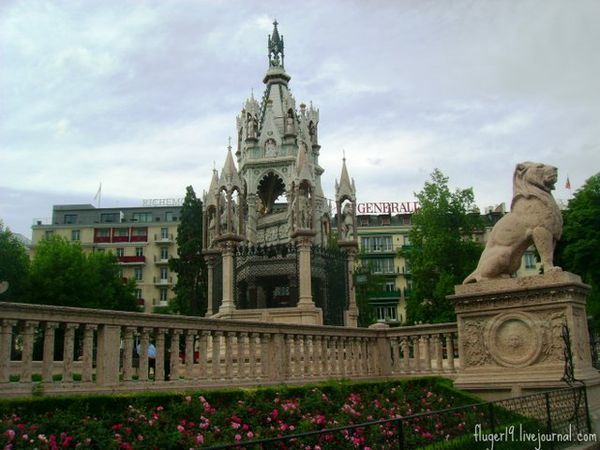 On one side of the lake to another, you can get over the bridge of Mont Blanc: 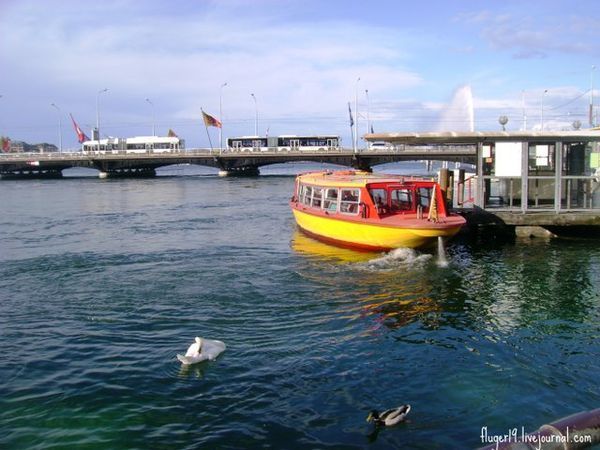 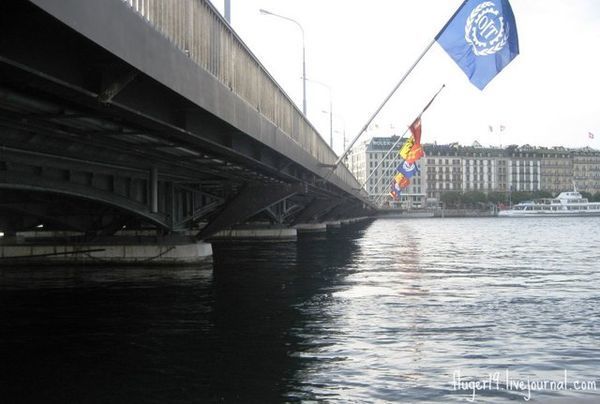 Another symbol of Geneva - floral clock. Ornaments floral patterns are constantly changing. I saw them as: 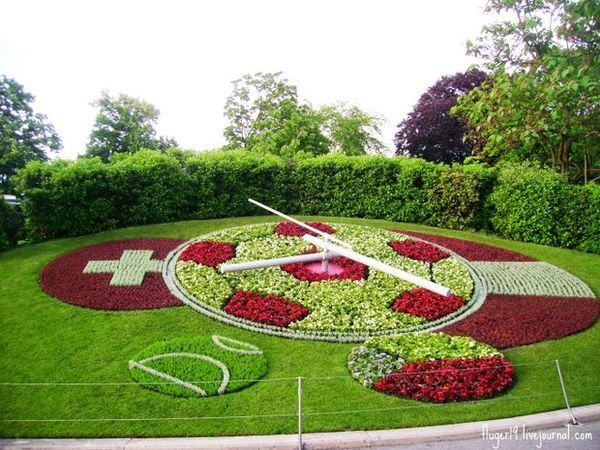 A little bit about Calvin, played in the history of Geneva a key role. 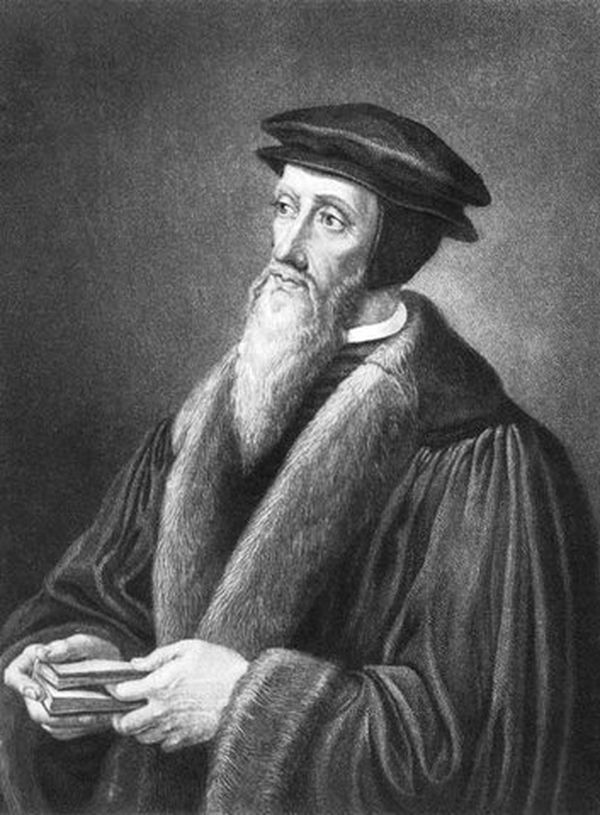 Jean Calvi? N - French theologian and church reformer, founder of Calvinism, a frustrated lawyer who became a Protestant. Pposle scandal with the spread of the Protestant propaganda in the Royal Palace January 29, 1535 in Paris, which resulted in the burning of six Protestants, finally left France. After a while he stopped in Geneva, begins to lecture at St. Peter's. Calvin gradually acquires the authority in the city. Under its influence in the city established strict rules, Calvin and the Reformers appears opposition. During the life of Calvin in Geneva in gradually established a regime that resembled a theocratic dictatorship. His so-called - "Geneva Pope." Calvin, in spite of the idea of anything wealthy man to God, did not consider worthy to emphasize their prosperity. Gradually, in Geneva there was not a theater, mirrors shattered as unnecessary, elegant hairstyles subjected to condemnation.
That is the same St. Peter's Basilica - cathedral in Geneva, one of the main attractions of the city. 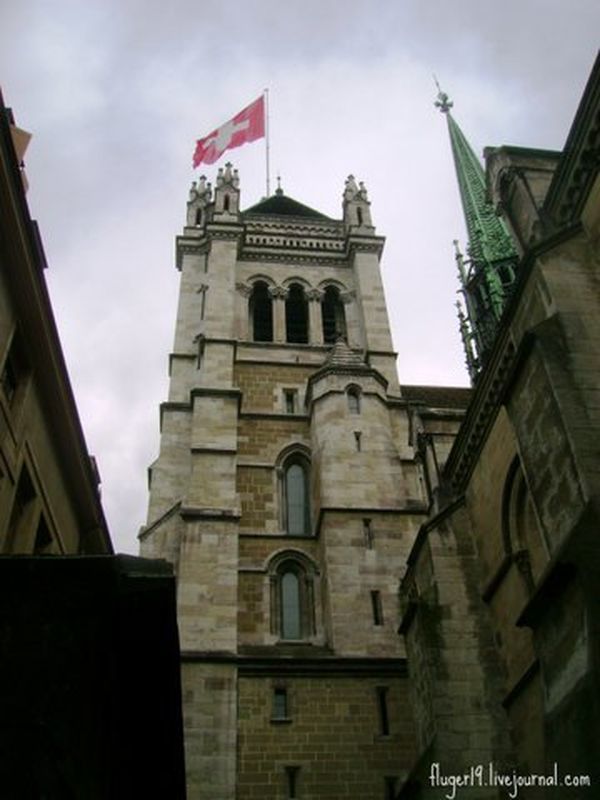 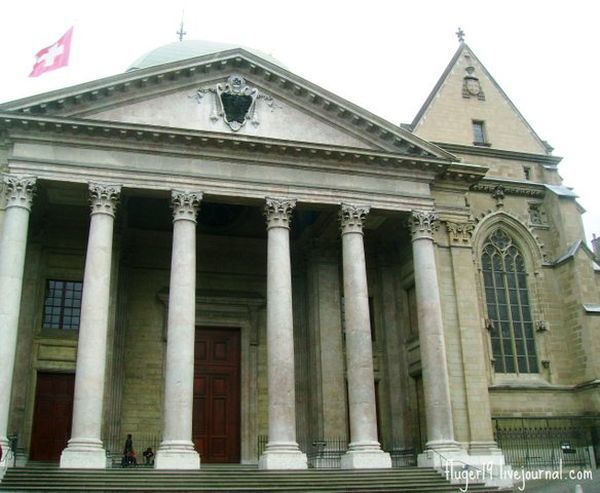 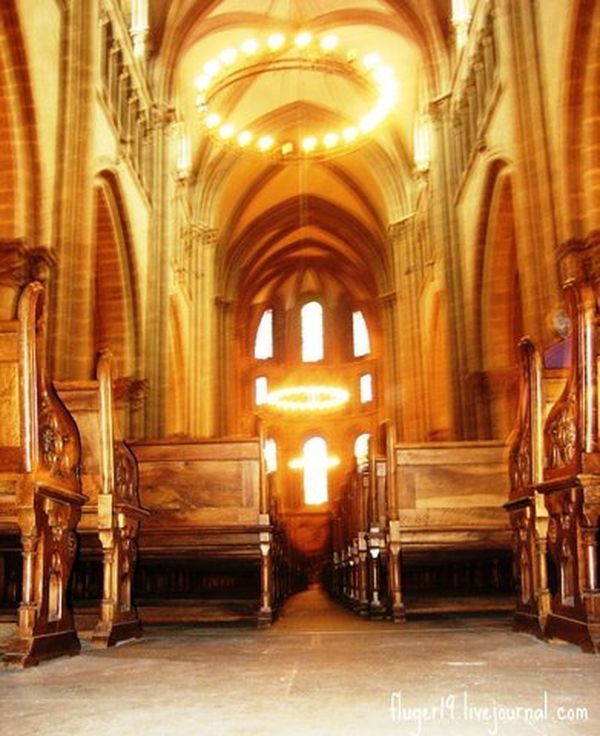 Believe that there is still a modern liberal Switzerland preserved signs of great piety, made at Calvin. At least a day. At night, while pious Genevans sleep in Lake Geneva can offer hashish, and on the forecourt spectacular ladies very strongly familiar with the passing men. Here parking in Geneva: 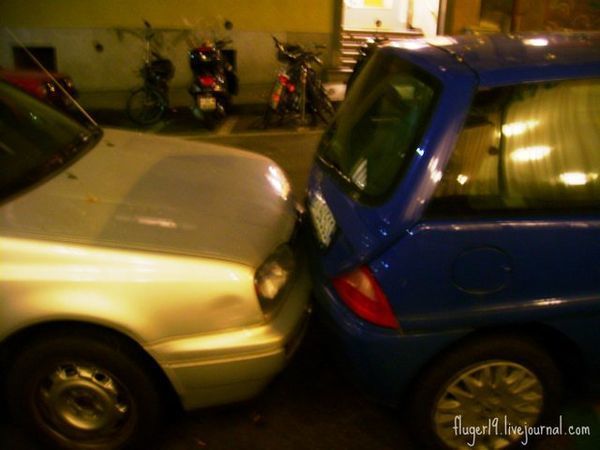 Remains of the bike. Middle of the night: 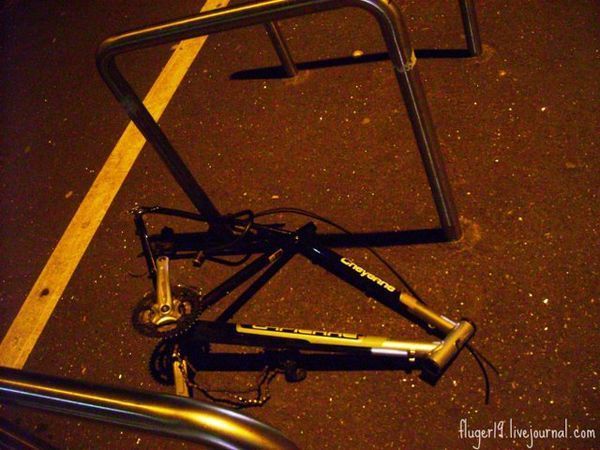 Bicycle parking in the afternoon: 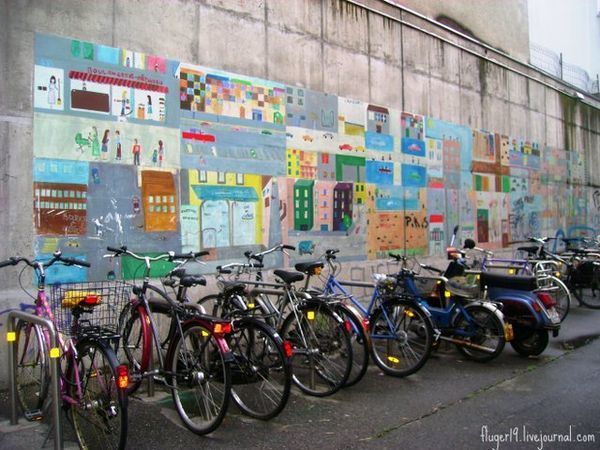 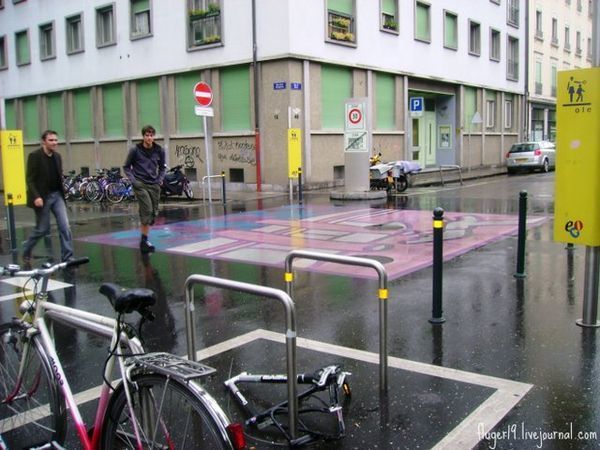 Digression: checking declared by the manufacturer watertightness hours in the waters of the fountains Geneva. Swiss quality does not disappoint! 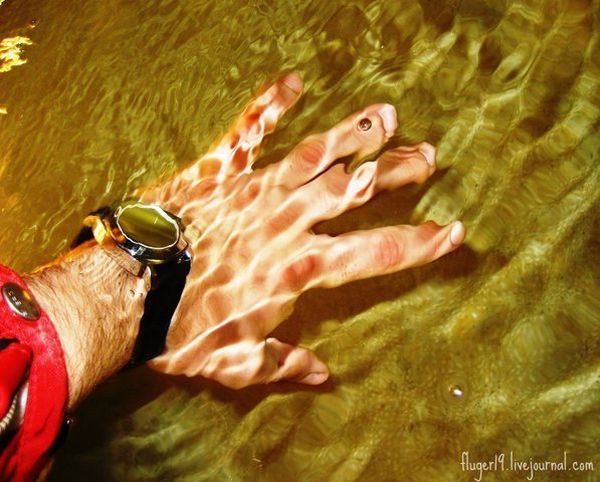 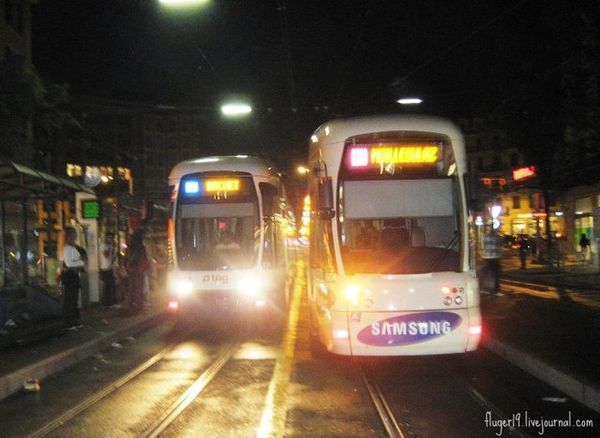 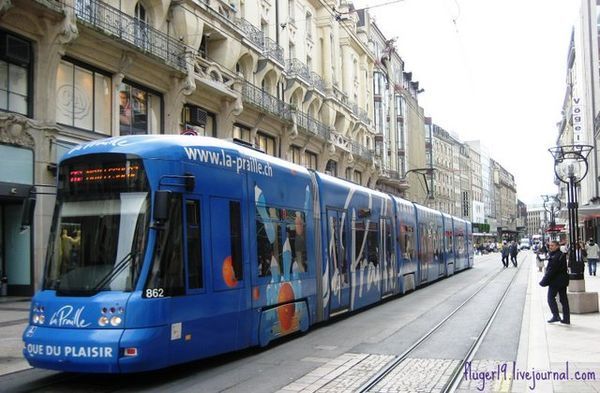 Was not able to ride, all on foot, but a taxi. And they say, hotels must issue a card, or allow them to ride free or at a discount. But just do not know.
What are the symbols of Switzerland? Watches, banks and, of course, cheese. Here the counter with cheese in the store «Manor». By-turn counter has the same magnitude continued. 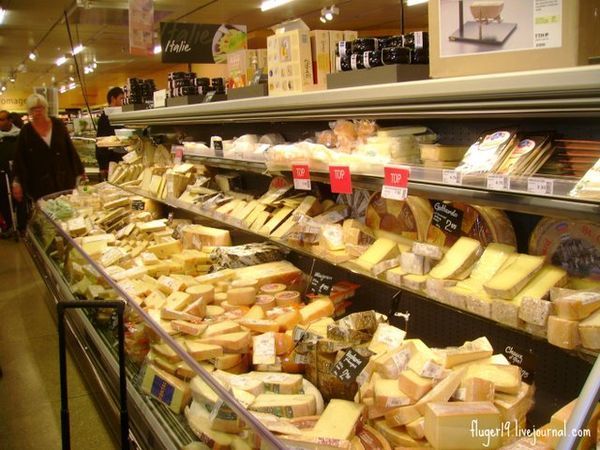 In Geneva, very pleasant to walk, sit in a cafe watching people ... 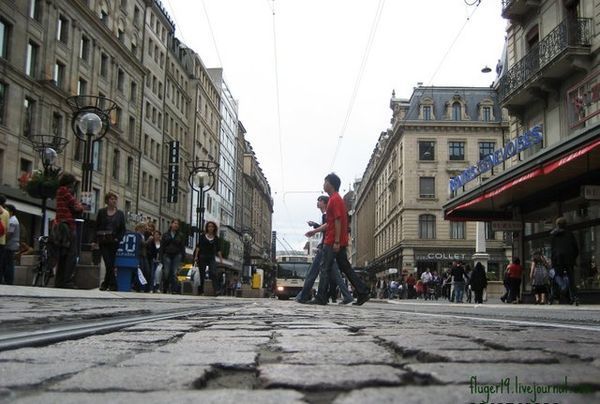 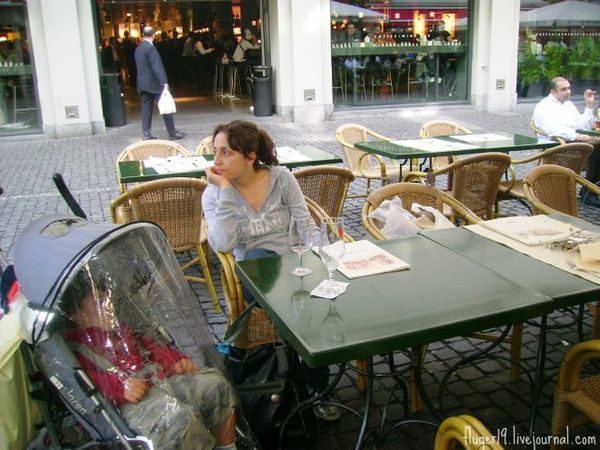 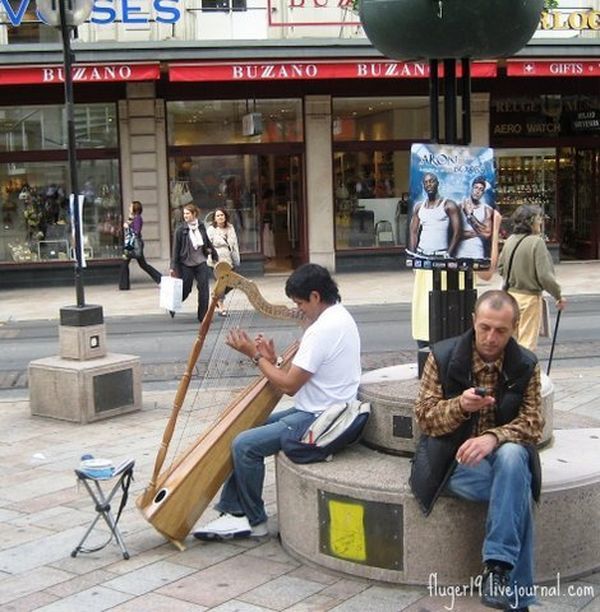 And this picture I watched at Geneva airport before departure: 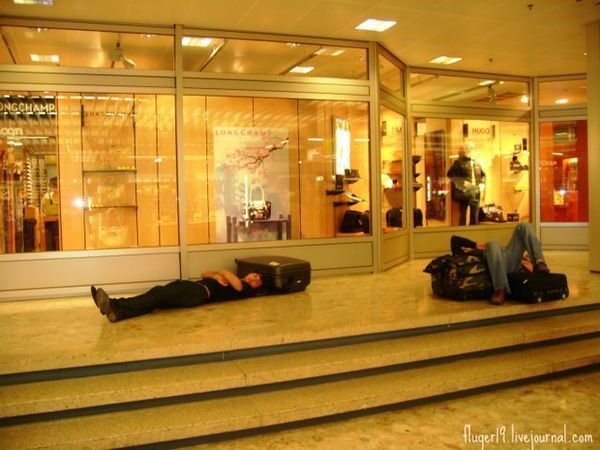 What about Geneva in custody. Measured, cozy town, I think it is pleasant to live. At least if you do not live - that work, and that many do: living in France (cheaper), working in Geneva (earnings for people interesting). Afternoon - respectable, night suddenly releasing claws. It was nice to meet you, dear Geneva!