AdBlock detected. Site operation may be disrupted due to running AdBlock. Please disable it for this site.
Home Stories Sweden

How are trains in Sweden

During the night I traveled more than 1,000 kilometers of railway lines. My route looked like Vasteras - Stockholm - Lund - Katrineholm - Vasteras.
During this trip, I traveled to 4eh different types of trains, of which I will tell in this post. 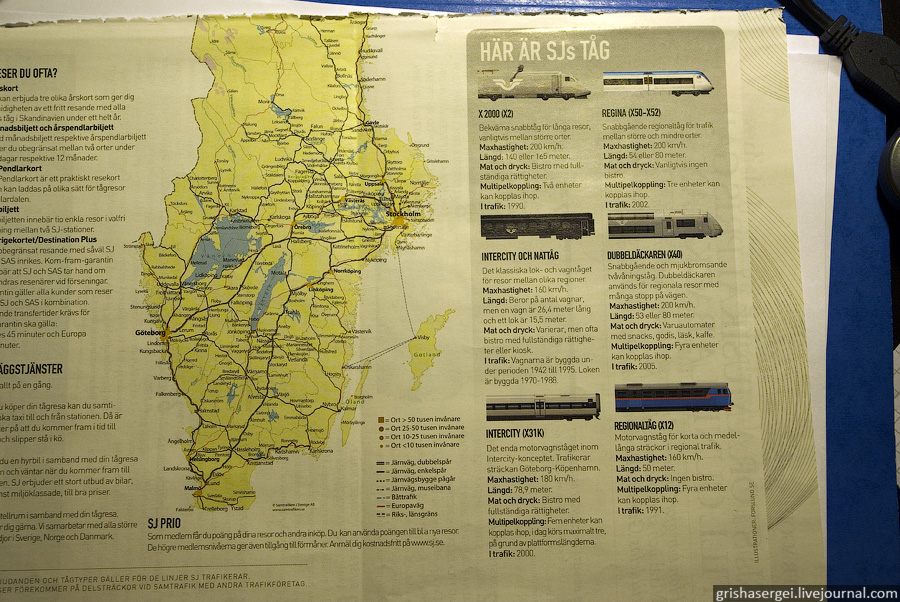 Thus, according to the brochure of the Swedish railway (www.sj.se) rolling stock, providing passenger transportation, consists of 6ti types of trains. I tried 4 of them: regional dvuzhetazhny X40, X12 regional, overnight train and high-speed X2000. It started with my itinerary regional double-deck trains X40 from Västerås to Stockholm. On this type of train I hedgehog often, it runs between Vasteras and Stockholm every hour and the trip takes about an hour. This is the newest train was put into operation in 2005. Entrance to the lower deck and stairs to the second floor. Of course, I prefer to ride on the second floor. 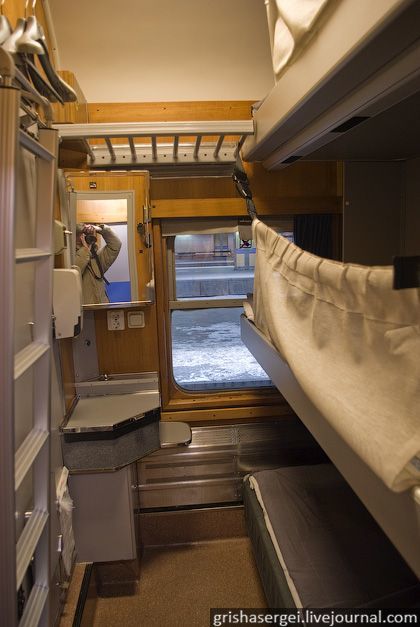 The interior of the second floor. 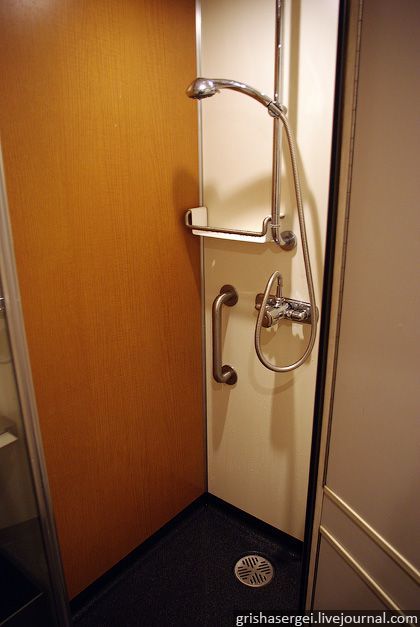 The train operates wireless internet. Internet access is purchased during the purchase of the ticket. 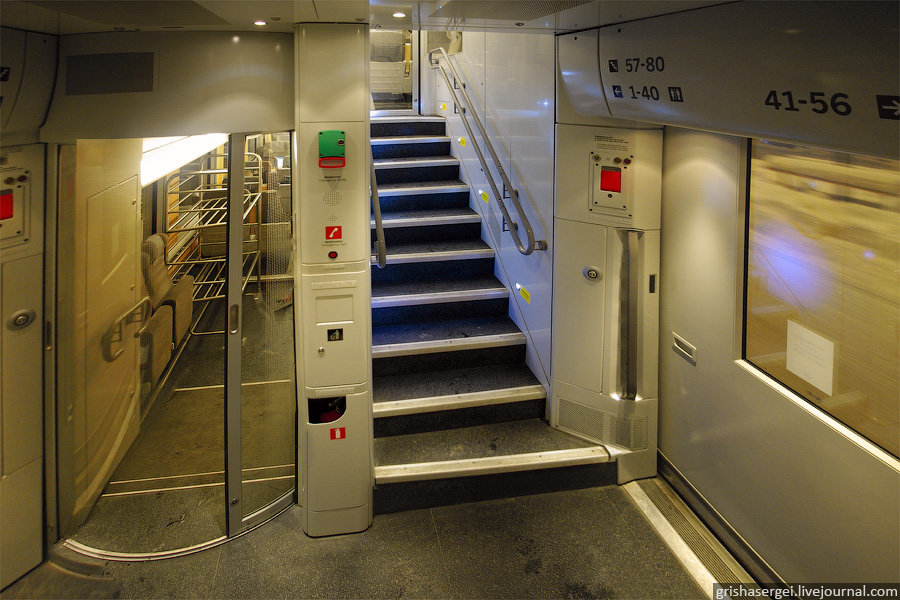 Wc. The toilet has a soap, hot water, paper towels and toilet paper, and it is always open. Each car has such a normal, and even the entire structure, there is one big fucking toilet disabled. 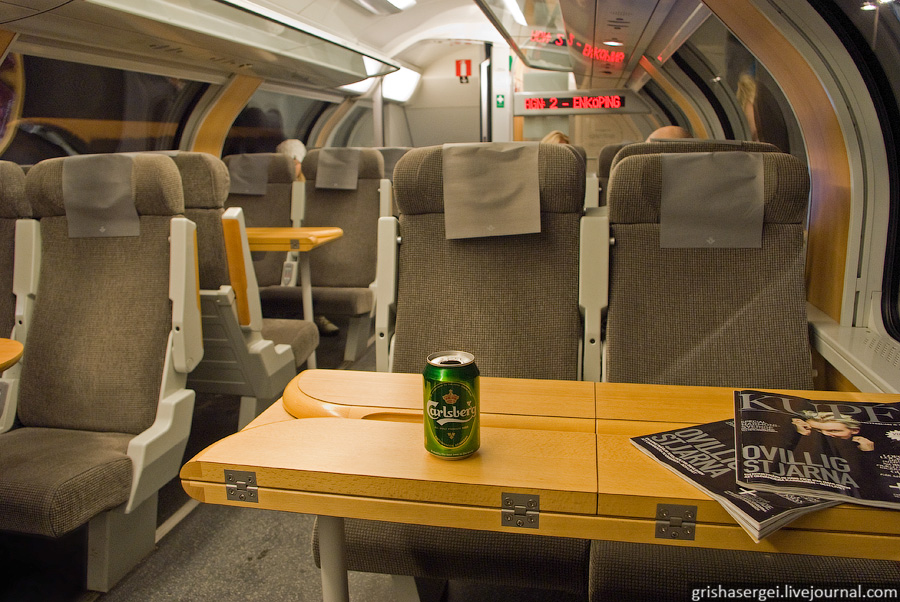 Vsse doors open with a wave of the hand, in these moments feel like a Jedi! 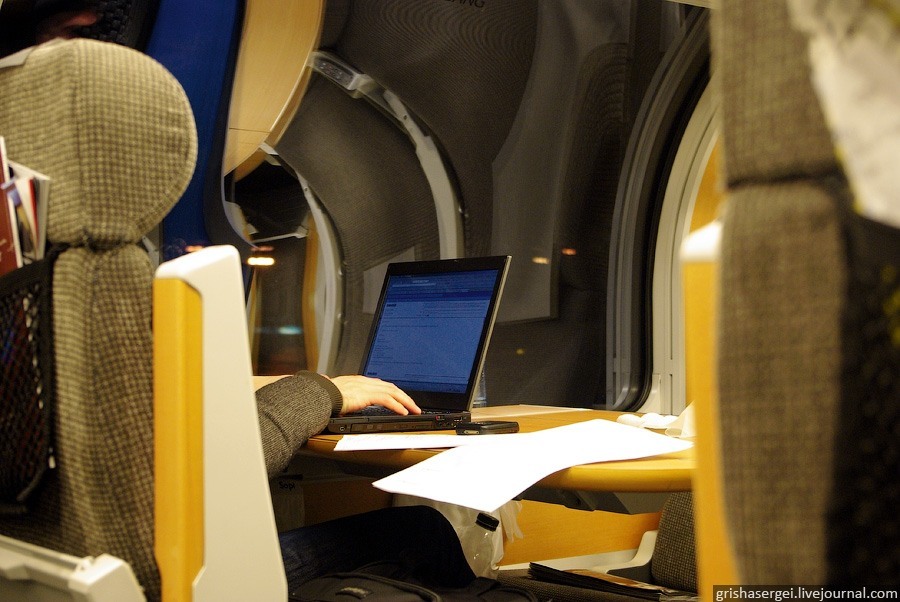 You can tilt the chair, play music and enjoy the ride. 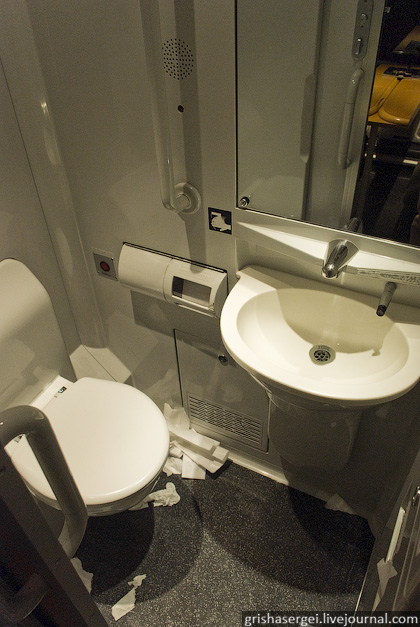 In Stockholm, I was waiting for a transplant on the night train to Malmo travel through Lund. 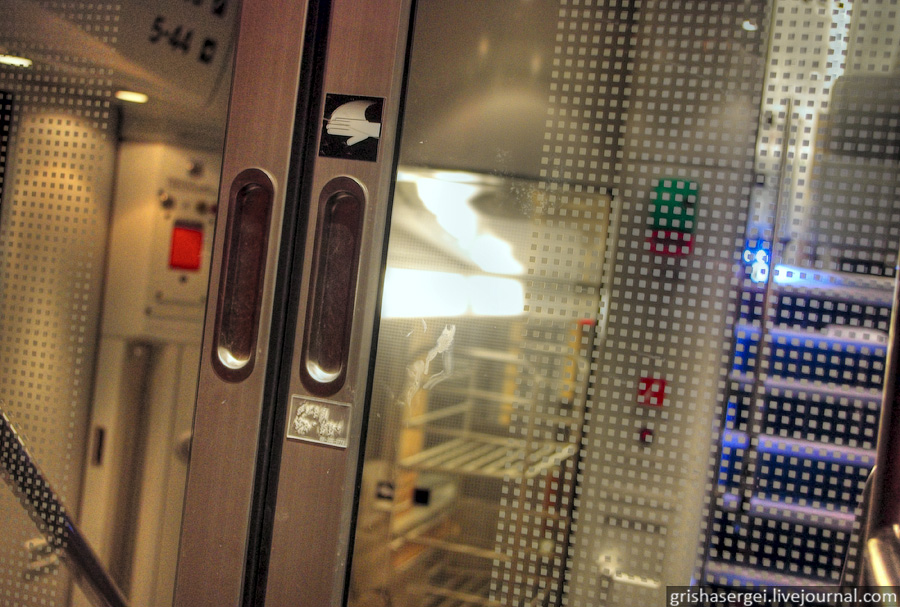 On the night train need to register in a kiosk. Register - it's just a show ticket. In principle, this can not do, if I immediately went to the car, my ticket likely would have remained untested. Register soon made for the convenience of the passenger, because in this case the conductor will know which stop you wake up. 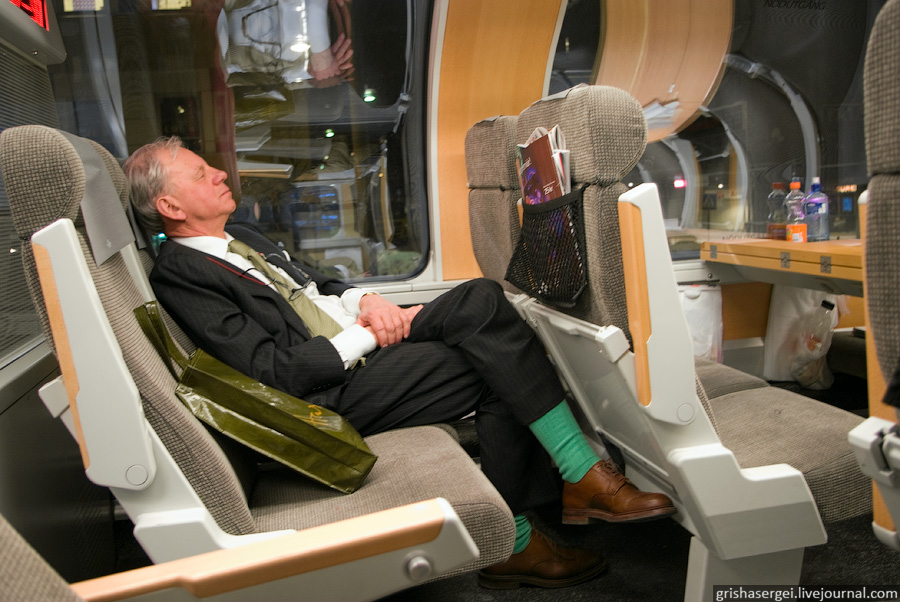 According to the brochure SJ, night trains cars 1942-1995 years of construction, and locomotives - 1970-1988. Before that, I did not go on the European night trains and all my experience was limited to a few trips to Ukraine. The difference, I think, and so clear. In the Swedish overnight train can safely sleep in human terms, period. 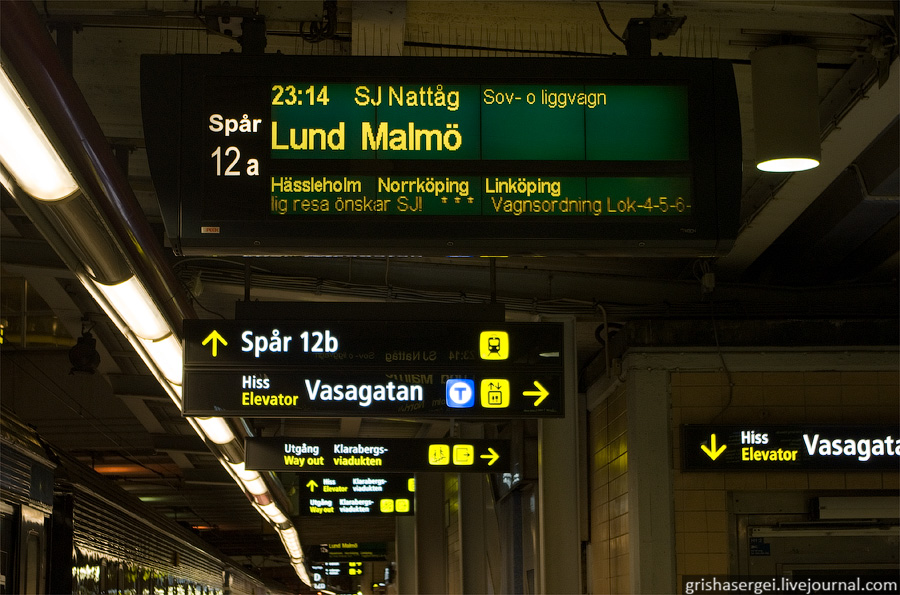 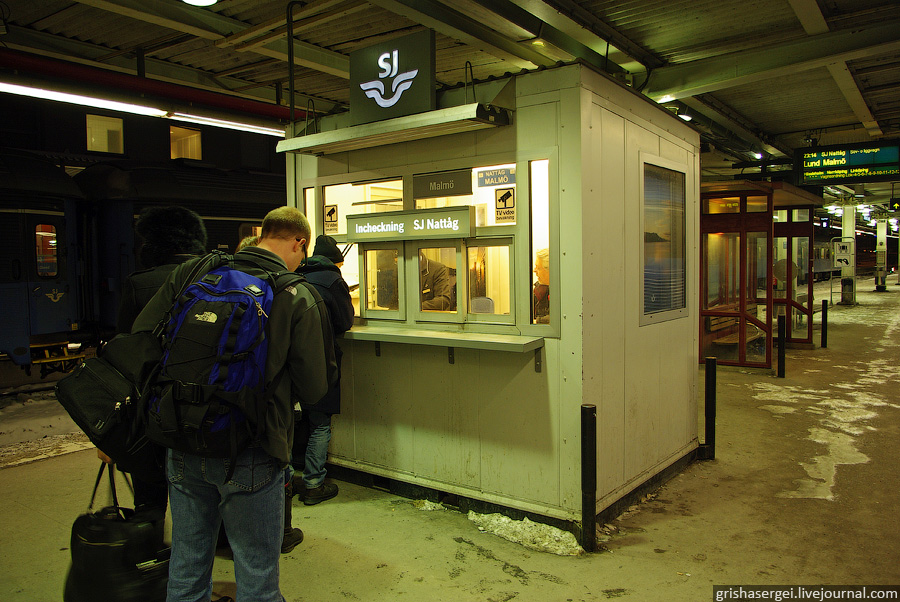 At night there is a 3rd class train - 6ti seater coupe, 3eh local and single. I went to the middle class in the compartment 3 beds. Beds are located one above the other. Train is really the night, because nothing but sleep more physically impossible to do, places to enjoy the party and the party of dominoes no. 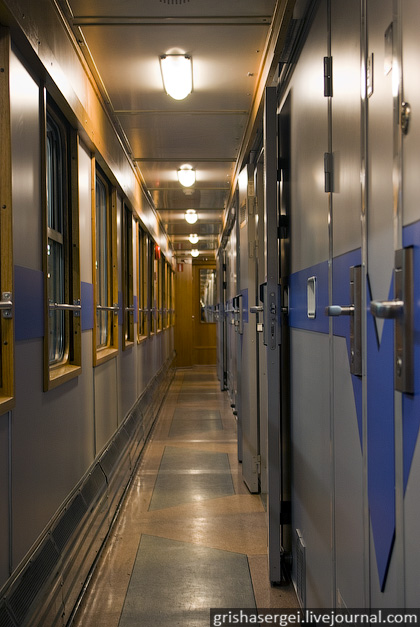 But in each compartment has a sink, soap and climate control. Cards with the logo and symbol Sj soul are the keys, respectively, from the coupe and soul. Yes, the car has a full shower.
The shower and toilet. 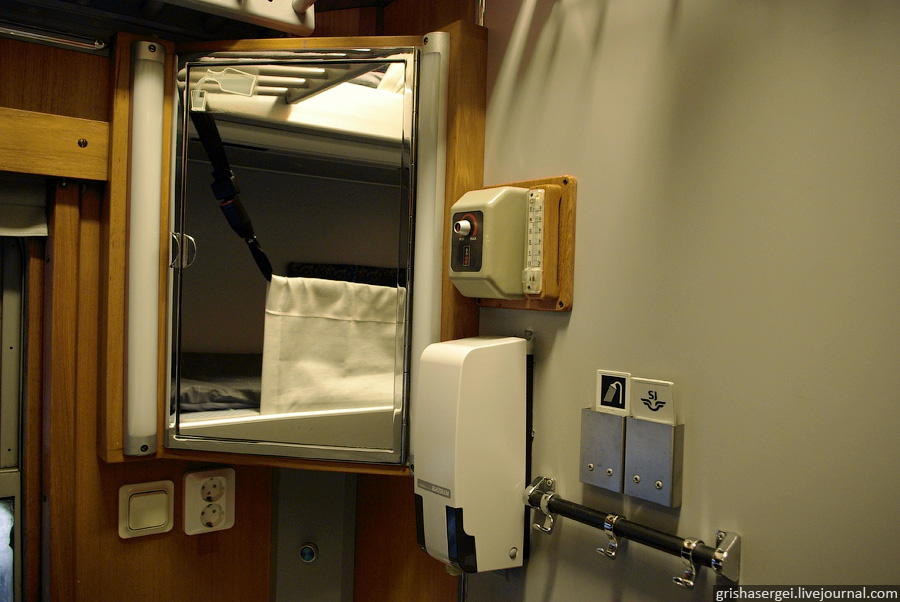 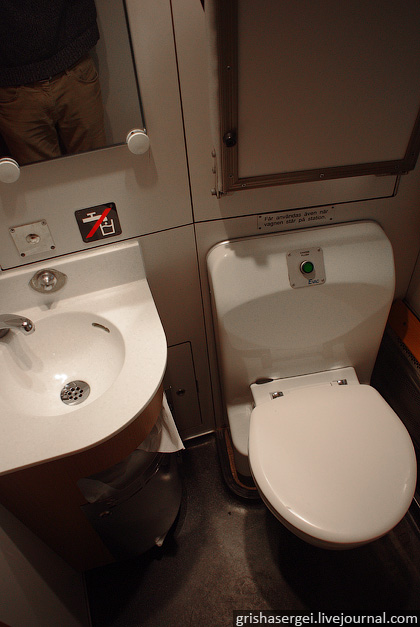 Unmade bed immediately - a blanket in a quilt cover, pillow in a pillowcase, top-quality towel is clean, which is useful in the soul.
And yet, on the second and third floors of the stretched mesh to the passenger fell rolling over in his sleep. 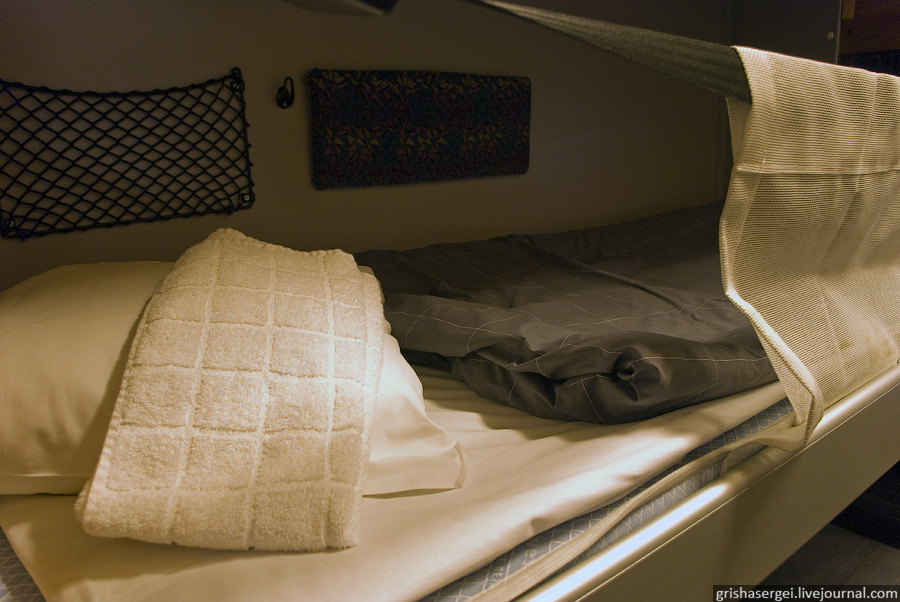 Sutra, in the corridor on the railing hung fresh local numbers, yuzhnoshvedskoy newspaper, which said that in Lund -4. Great weather! What was in Lund, I do miss that, and tell you about it in one of the following posts, then. Already in the afternoon, at 4:30, I went to a promising, high-speed train X2000. I have to say, I was a little disappointed. Feels like, it is not going much faster regional, not just stop at every stop, and every third. Unfortunately, the current speed on the scoreboard is not written, and the most applications - 200 km / h. Having studied the brochure to learn that, it turns out, it's an old model - 1990. 21 years old, just so long expressway number has not been updated, then the Swedes should prepare something really cool in return! Shop. 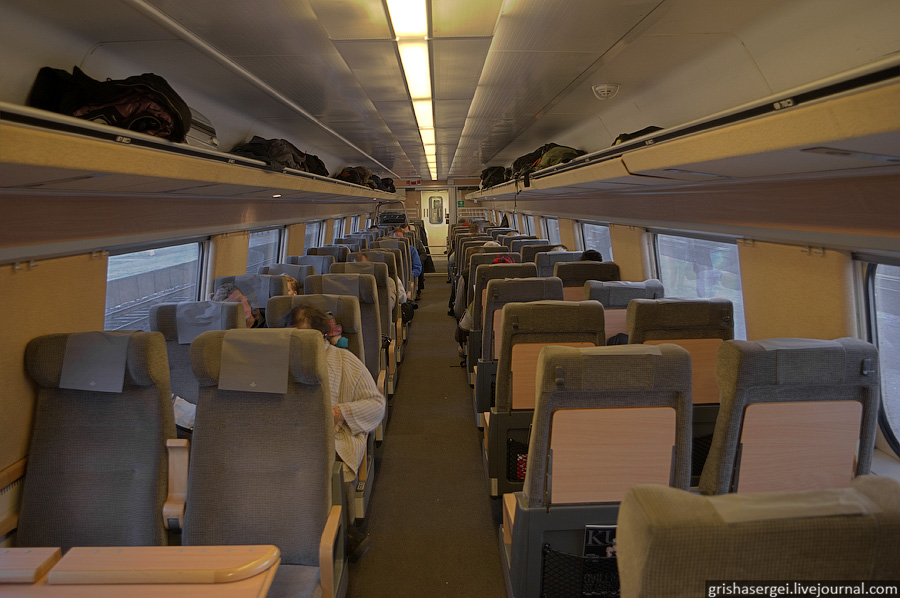 Toilet too, but no different from the regional.
But there is a dining car, or rather the car bistro. 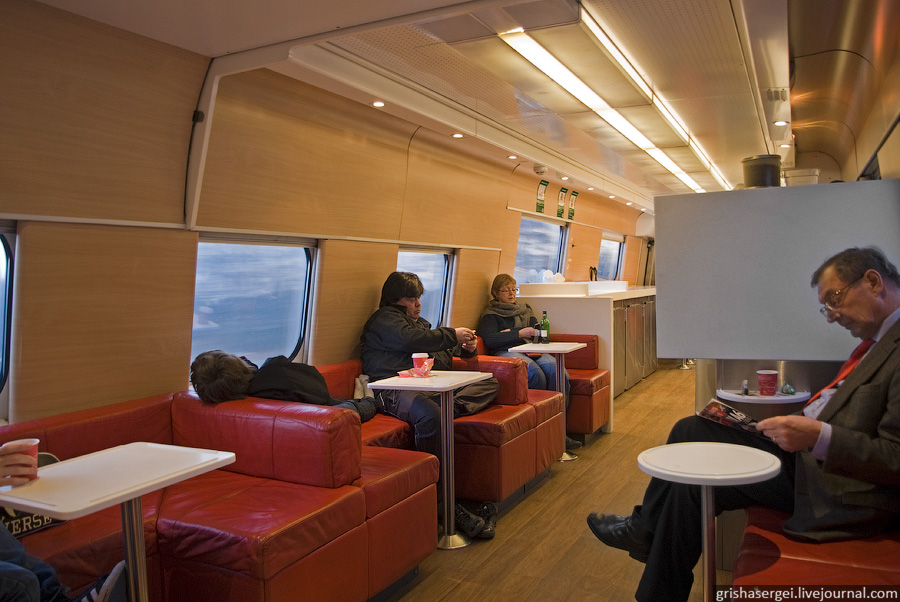 Range. Prices are the same as in the city, so if you want to eat, it is not necessary to stock food in advance. 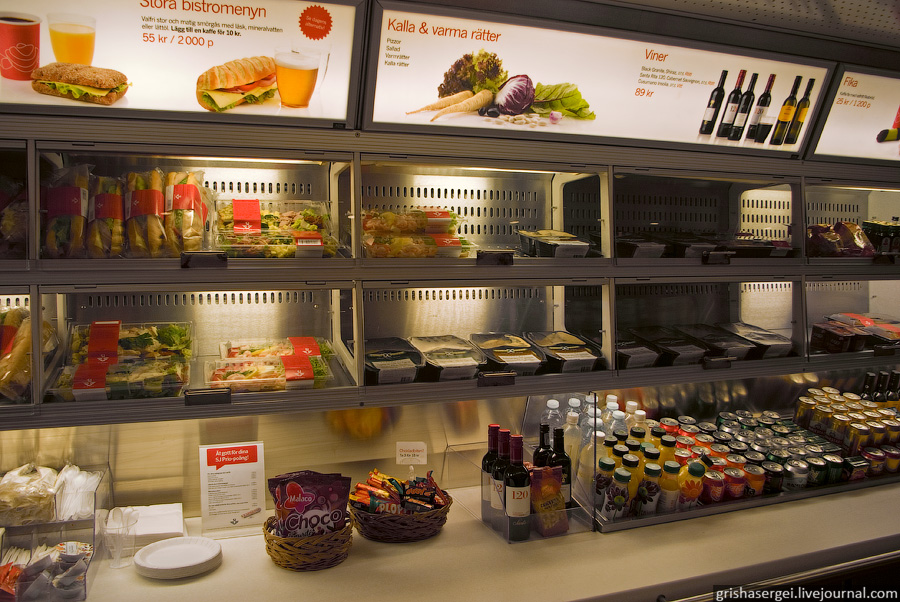 But if you have with a boiled egg, smoked chicken, burgers or soup in the bottle is, it can be warmed in a microwave in the same bistro. The choice is yours! 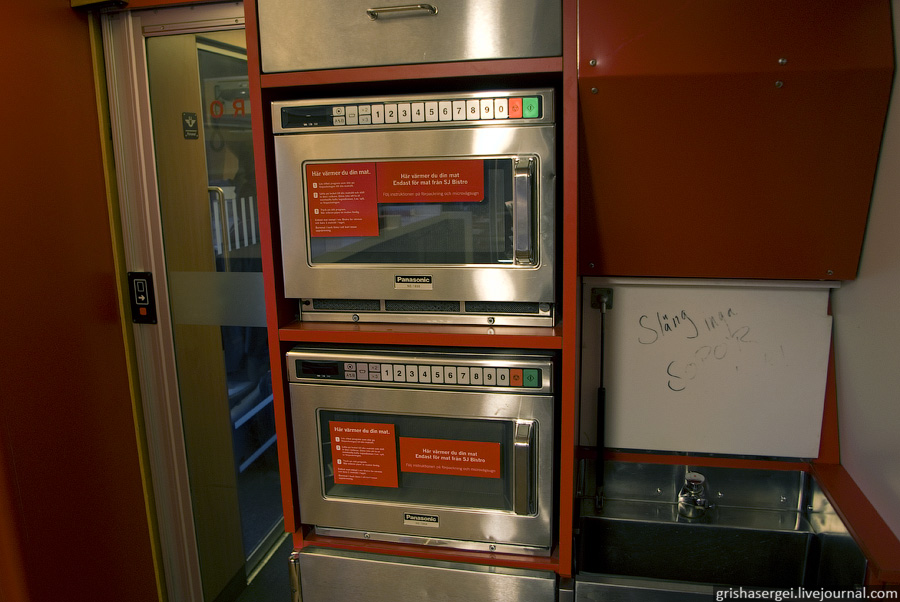 Despite the fact that Sweden is a northern country and good for six months, if not more, it is covered with snow, winter trains having trouble - the train may be late for an hour. I had a transplant in Katrineholm with a margin of 15 minutes. Katrineholm - a small village, and I was a bit worried - if the train was late and I miss transplant, then I can hardly get out on the same day. A X2000 late by 20 minutes. When it passed the time of transplant and I was prepared to go further in Stockholm hare, the announcement was made ​​for those who continue to travel to Eskilstuna and Västerås - our train we wait. Fiction. By the way, the announcement was made ​​only in Swedish, and I Gaudry for what could understand him, ran on stage enclosing your trip. From Katrineholm in Vasteras went regional train model X12 1991. The train was very sincere. The interior is clearly not 1991, was made ​​within the overhaul. 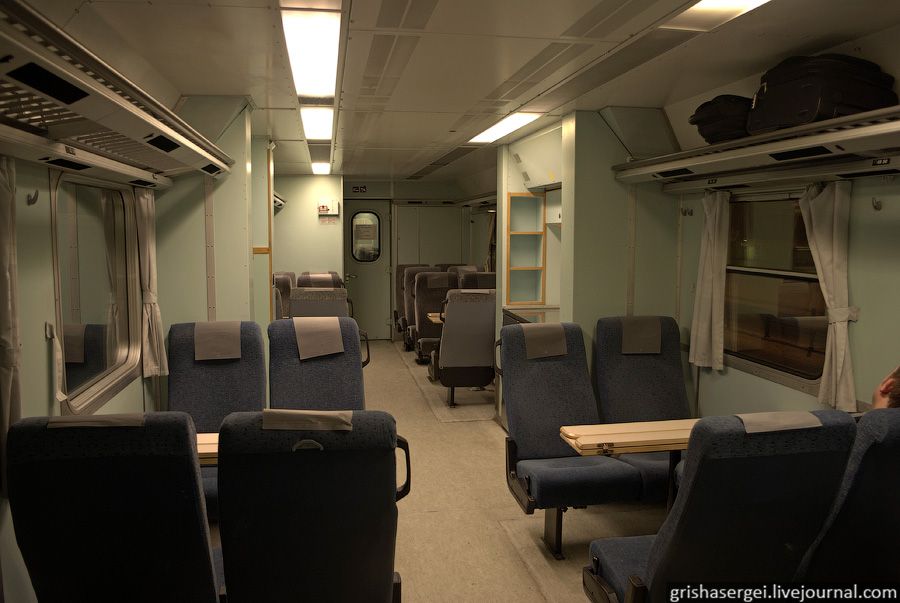 But the curtains are left, so cozy :) 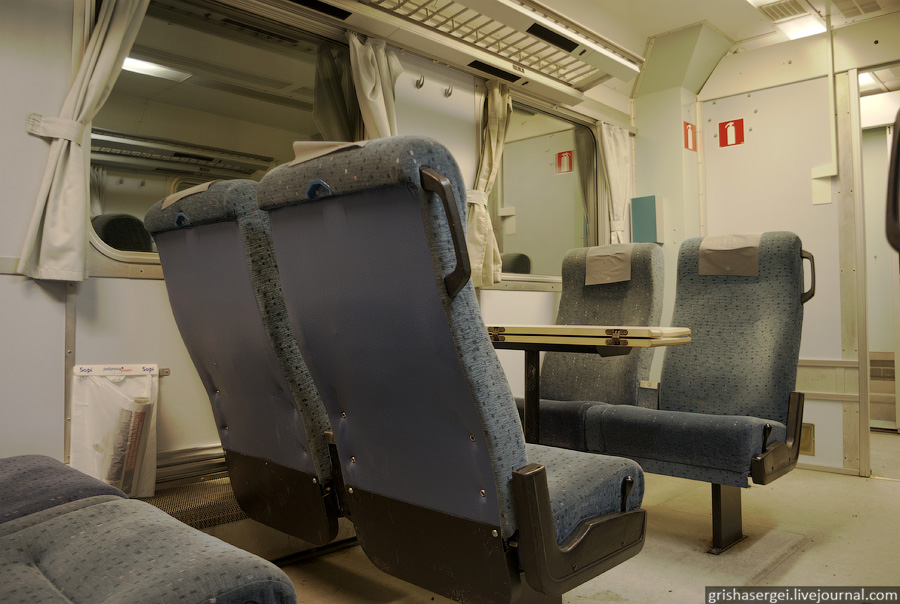 There is here a weird cabinet with sink, in the middle of the passenger compartment. What is it ?? 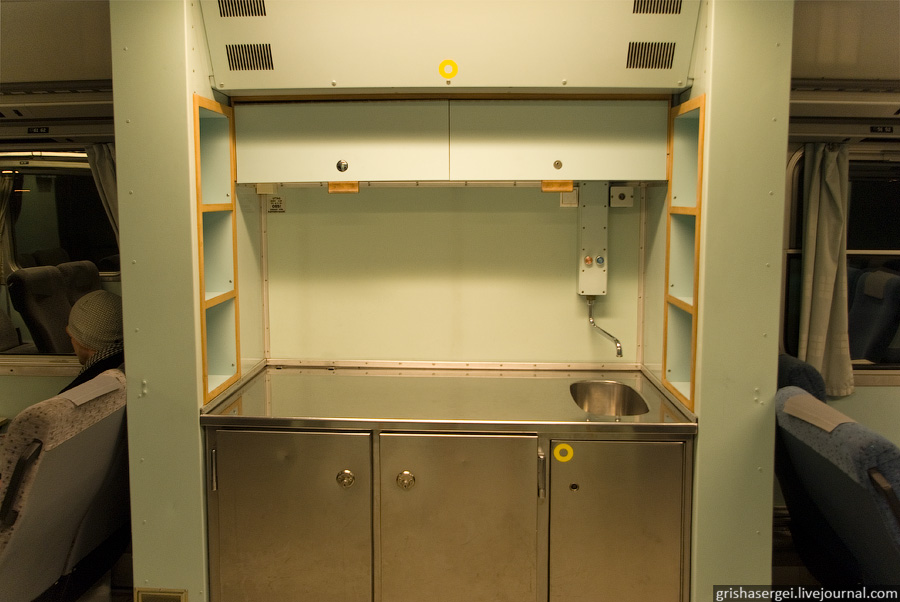 Wc. The largest in comparison with other models. 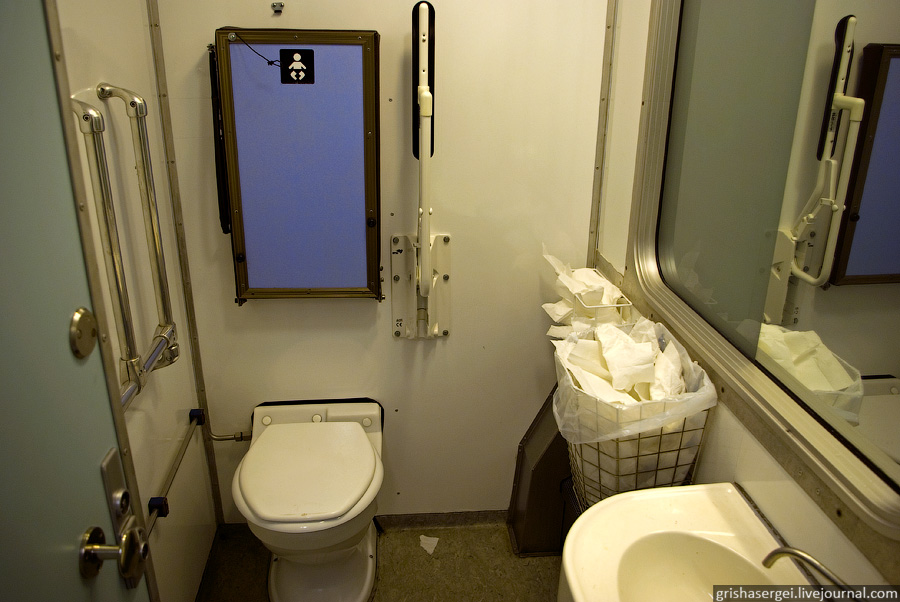 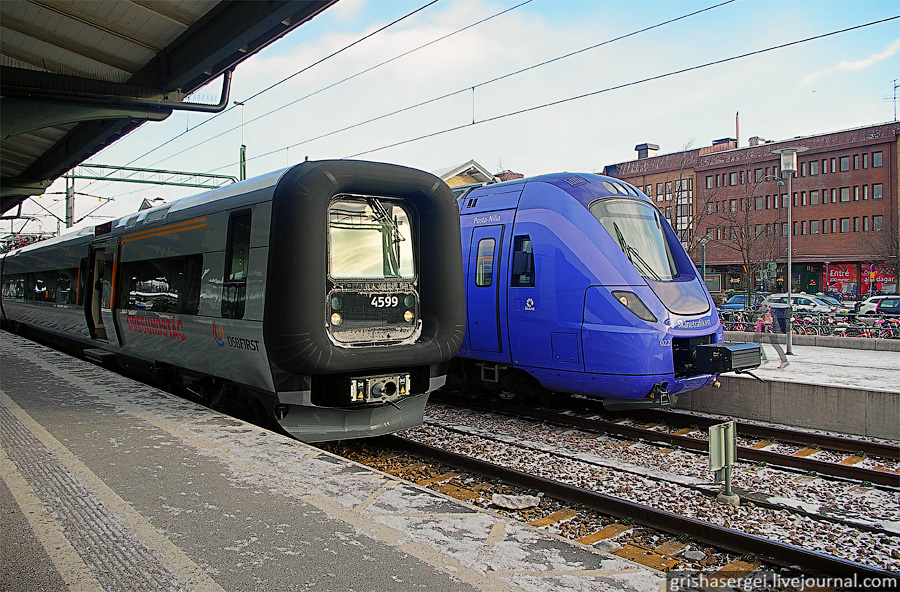 H31K my favorite, he is very funny looks)) 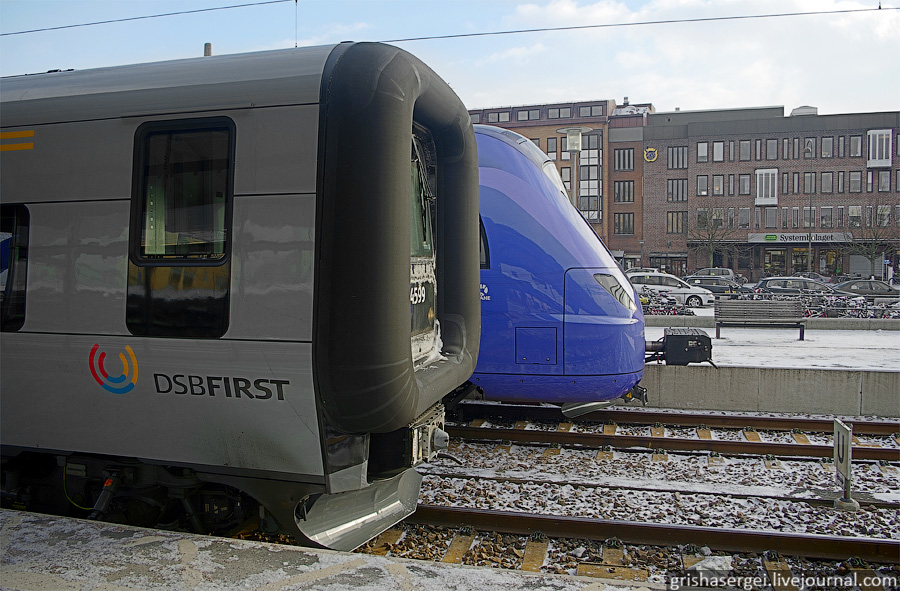