AdBlock detected. Site operation may be disrupted due to running AdBlock. Please disable it for this site.
Home Stories Russian Federation

Kizhi Island (it is strongly recommended to do the accent on the first I) - the main pearl of Lake Onega and the center of attraction for tourists from around the world.

The first mention of the Kizhi churchyard, which unites several villages, was discovered by scientists in the book scribe 1582-1583 gg. In the XVI century, the island became the center of Spassky churchyard, of which included 130 villages. The word "graveyard" in ancient Russia meant a major settlement with the church and the cemetery. At that time it was the center of cultural, spiritual and economic life of the county. There were conducted fairs, gatherings and various holidays. The name comes from the Veps Kizhi kisi word, which means "merrymaking".

Despite the fact that the area Kizhi Island about 5 sq km (it is extended in length by 5.5 km and a maximum width of only 1.4 km away), it now except Kizhi, located a few villages,

nizinka marshy, was chosen by a viper,

and carpenter's center, which for many years is the restoration of fragments Church of the Transfiguration.

The majority of travelers went down to the shore, immediately rush to the northern tip of the island, which is spread by a small square architectural ensemble of Kizhi. Its dominant feature is the Church of the Transfiguration - a monument that has no analogues in the Russian wooden architecture and the world.

One of the most famous architectural wonders of Karelia, the church gave rise to the legend of the Master Nestor, to build a 37-meter church and an ax without a single nail. This tradition is so ingrained in the mind that the guides have to explain every time the tour in detail, that this is possible for a log house (made from pine logs), but it is impossible for the roof (made of alder). The final metal nails used for fastening the wooden shingles.

Fully constructed from two kinds of wood, Church of the Transfiguration of the Lord has a habit of playing with sunlight.

Guides say that the church was built by masters "on a whim" without drawings. If this is true, the result exceeds all expectations.

22-domed Church of the Transfiguration, built in 1714, was used for worship in the summer. Believers came to the service from remote villages, and could not Hanadiv skill Kizhi architects. Interestingly, in addition to beauty, such intricate construction of the church served also excellent drainage. Rainwater dripped with domes on drums, without penetrating into the building.

Inside the Church of the Transfiguration gilded wooden iconostasis was placed with 102 icons of the local northern letters XVII - XVIII centuries.

Some of these unique icons are currently being held in a nearby winter Church of the Intercession of the Virgin.

The nine church was built in 1764, and its highest point is located at an altitude of 27 meters.

At the end of the XIX century the church inside and outside sheathed with boards and plastered, giving it a "city view".

Traces of the construction and manipulation of today can be seen inside the church.

Rounding out the ensemble of Kizhi is the "youngest" of the trio, 30-meter high bell tower.

Buildings are situated so harmoniously in relation to each other, that each point of the island's skyline looks different.

In 1945, the area Kizhi ensemble, "which has global significance historical and artistic value", was declared a state reserve, and in 1948 began restoration work. removed plank paneling, with domes of the Transfiguration Church removed the iron: Churches original form was returned. Simultaneously, work was done on the restoration of the interior decoration of churches. Icons of them in the Great Patriotic War of Zaonezhye, occupied by Finnish troops, were taken to Finland, and returned after the war.

During restoration it became clear the alarm condition log Church of the Transfiguration. The tree in the wet climate of Karelia does not live long, and revealed significant deformation of the framework. In the 60 years it was designed to strengthen the engineering project, which provided further full bulkhead church using the maximum number of old logs.
At the same time conducted experimental work on chemical protection of wood. Employees Senezhskoy laboratory technique of chemical impregnation has been developed, which has been applied in a number of museum sites, including in 1974 at the Church of the Intercession. The result was, to put it mildly, ambiguous. As a result, frame and roof of the Church of the Transfiguration in no way was impregnated, leave the wood to age naturally.

In 1980, the Church of the Transfiguration was closed to visitors. In 1984 the interior was introduced metal frame to strengthen the construction and maintenance of the bulkhead of the church without its full rolling.

The first on the restoration went logs lower tiers log, and witnesses recall that from the Onega Lake Church of the Transfiguration was like a ready-to-launch rocket, suspended above the ground. Stormy discussions 80s about the techniques of restoration led to the holding of the 1987 Open All-Union competition for the drafting of the structural reinforcement of the monument. However, none of the 15 offered proposals was not able to completely solve the problem.

In 1988 in Petrozavodsk and Kizhi Island ICOMOS international symposium to discuss ways to preserve the Kizhi architectural ensemble. It was attended by 108 specialists from around the world. In addressing the symposium were encouraged not to Transfiguration Church bulkhead. In 1990, the UNESCO organization under the number 544 has expanded the list of World Heritage another valuable object, how was the Kizhi architectural ensemble.

In 2000, the Ministry of Culture of the Russian Federation was approved the project of restoration of the Transfiguration Church. It is based on the method of "lifting", providing restoration or a complete replacement of worn-out logs without complete dismantling of the monument. The project allows to preserve the authenticity of the monument, on which insists UNESCO.

Restoration In the complex there is a detailed examination of parts of the log Church of the Transfiguration of the Lord, repairing damaged wooden elements, pre-assembled components and control tests.

Separate story deserves search techniques suitable for the restoration of wood. Similar to those used in the XVIII century pines were found only in the northern forests in the vicinity of Petrozavodsk. The wood must meet the very precise list of parameters, primarily on the density of the fibers and the local, northern origin. Depending on the condition of the original log cabins of logs Church of the Transfiguration, restorers replace them entirely or in part. Before restored item will take its place, waiting for her tests on special simulators that simulate the required degree of compression wood.

But not only the aforementioned architectural ensemble on the island is of interest to tourists.

Even in 1966, the unique architectural ensemble of the Kizhi supplemented the original environment and the state opened ethnographic, historical and architectural museum.

These were transported iconic wooden buildings: chapels, churches, mills, farmhouses and other buildings. Today its territory is 89 monuments of wooden architecture of XV-XX centuries.

Among the amazing collection of monuments of wooden architecture, carried on Kizhi Island - a tiny and wonderful in its simplicity, the Church of the Resurrection of Lazarus from the Murom Monastery. It is the oldest wooden building in Russia, according to the legend it more than 600 years.

Among the civil buildings catches elegant and spacious country house of the XIX century in the eye. Oshevnev peasant house, the interior of which is available for inspection. He became the first monument, which was brought to the island and laid the foundation for the museum-reserve.

Today, in this house regularly held master classes in embroidery, beading and other time-consuming but fascinating visitor procedures.

Like the things, by the way, you can buy.

And at the end of the story about the island of Kizhi. Given the fact that all the buildings on the island of Kizhi wooden smoking near them is strictly prohibited. In the event of an emergency response our train ... Well, you get the idea. 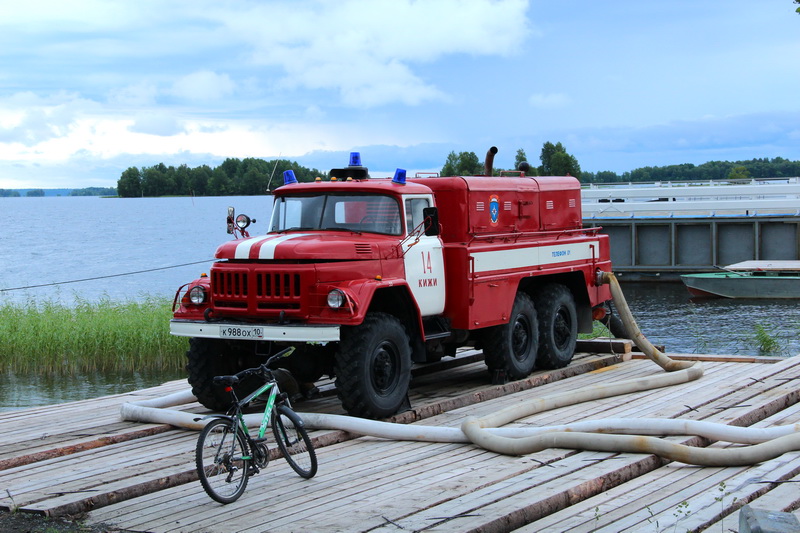