Up the river Chagres

Chagres - a picturesque river, which originates in the mountains of the Cordillera de San Blas and flows into the Panama Canal.
Drinking water for Panama City, Panama City for electricity and columns, almost 80% of the water needed for the channel - all waters of the river Chagres. 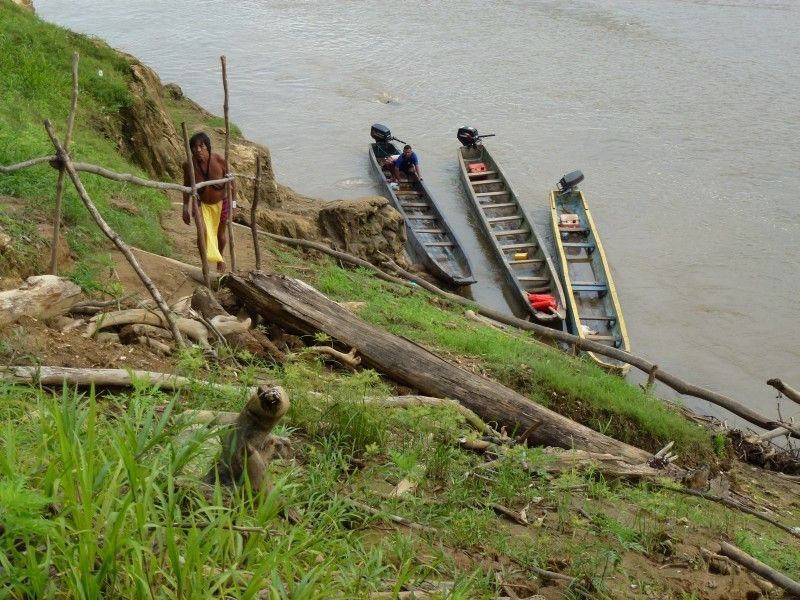 Putushestvie planning to Panama, I exchanged letters with Olga, director of the travel agency Ocean 2 Ocean Panama. These days they have already been formed for Russian tour groups. Olga sent me their program with a proposal to join the excursions which we are interested. I chose two: obzorka to Panama City and a trip to the Chagres National Park with a visit to the village of Embera Indians. Amerindian next time, because only a walk along the river we some wild bunch of pictures. Russian group to which we joined, was very few: a pair of Penza. It should be noted that in Panama and did a bit of tourists liked any place can be photographed without foreign faces, hands and cameras. 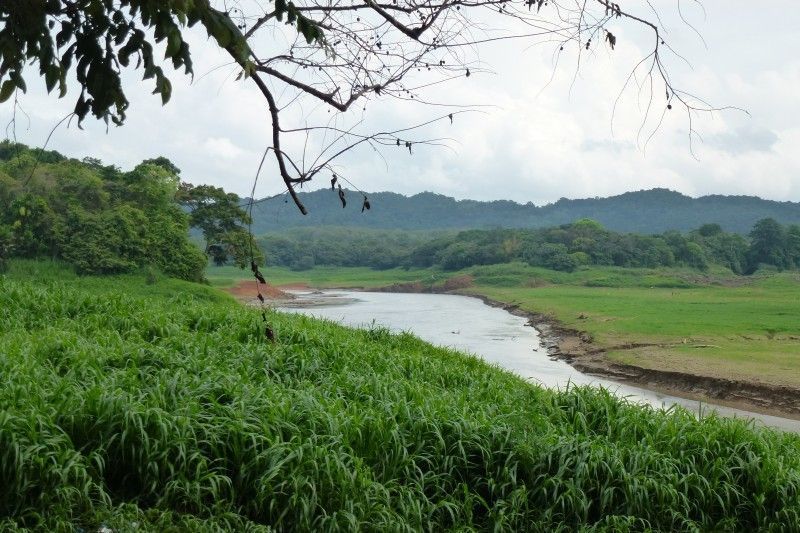 In the flood water level is above 5 meters, fills all coming meadows. 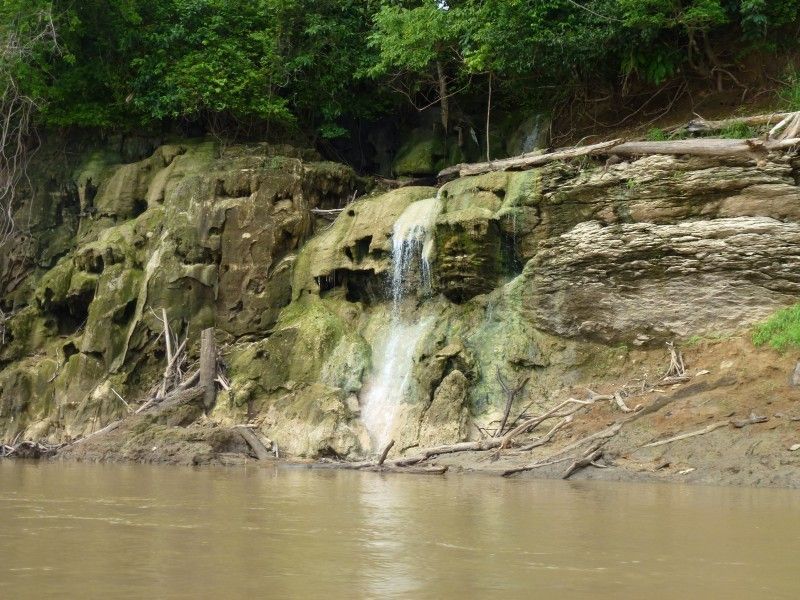 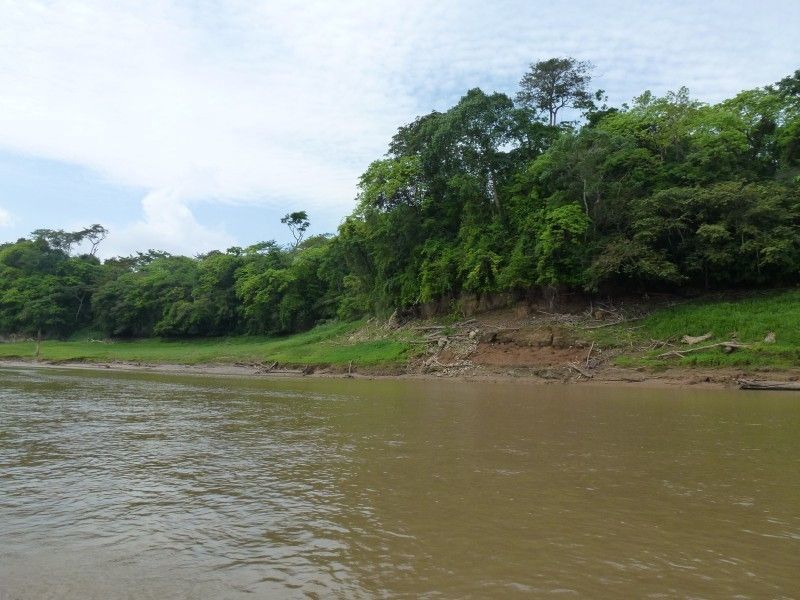 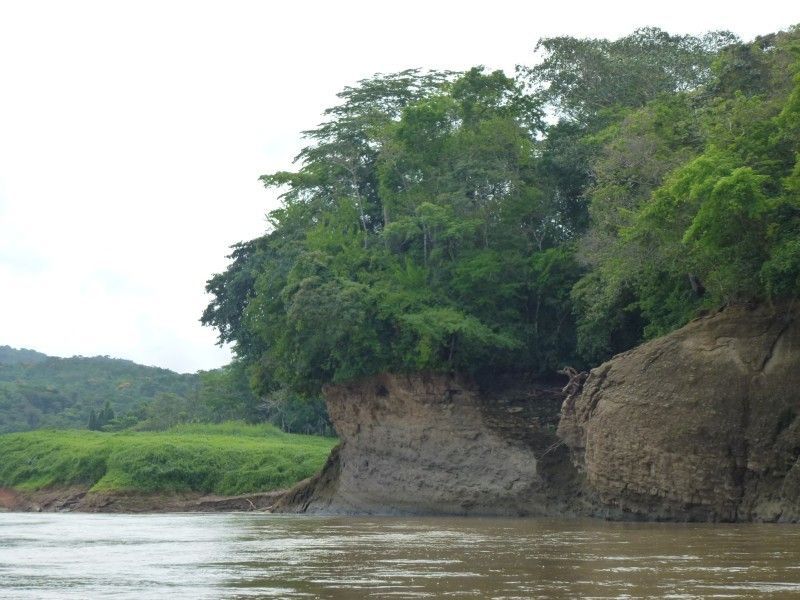 Guided the four of us boarded the Indian canoe and went up the Chagres. Pies ruled Indian Embera. 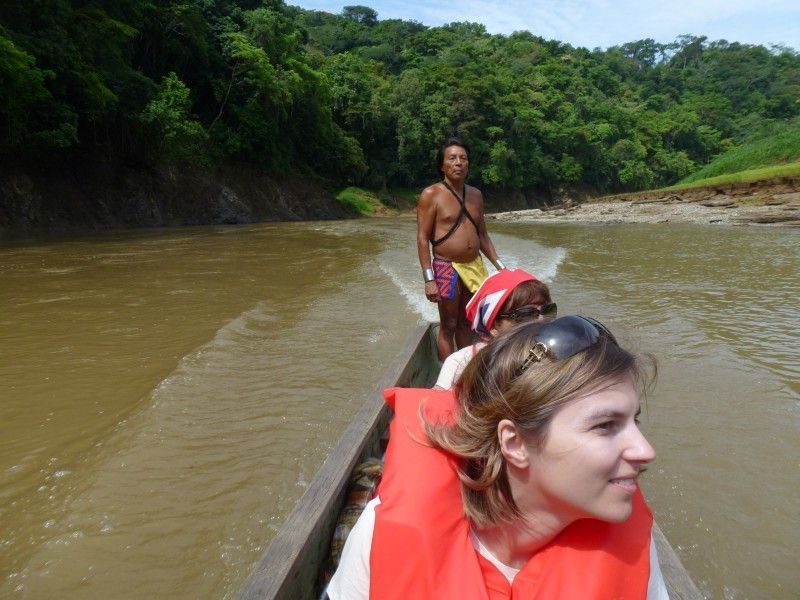 Usually pie accompanied by two people: one (is back) controls the motor, the second acts as a forward looking. Prevents rear of snags and other hazards, and in the case of small shoals, repelled the sixth, unloading nose, helping the cake crawl stranded.
Some part of the way we traveled with one steering, the second Indian to join us on the road. 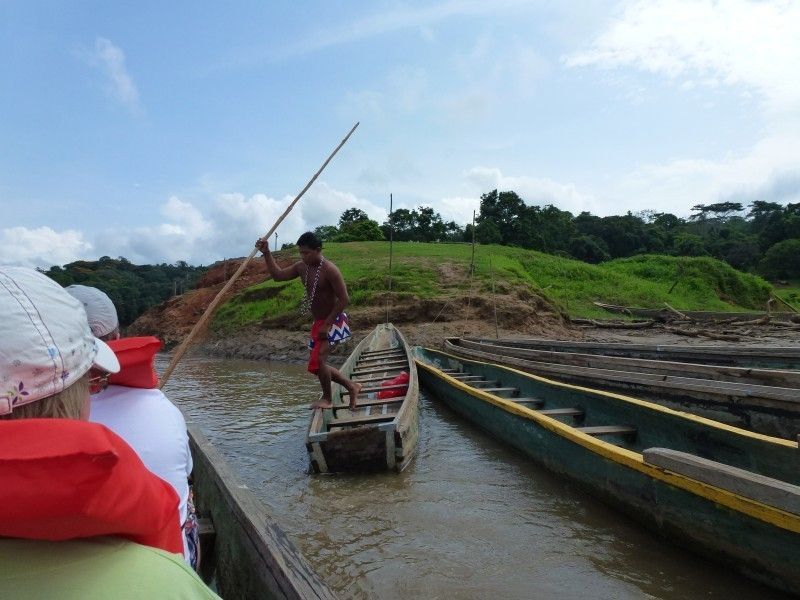 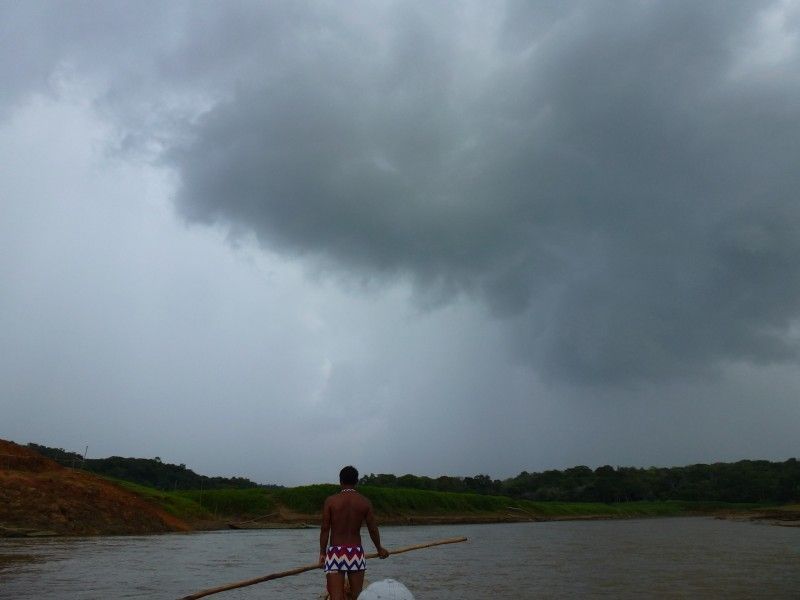 On the banks of that here and there met "lights" crocodiles, which made our puteschestvie exciting adventure. 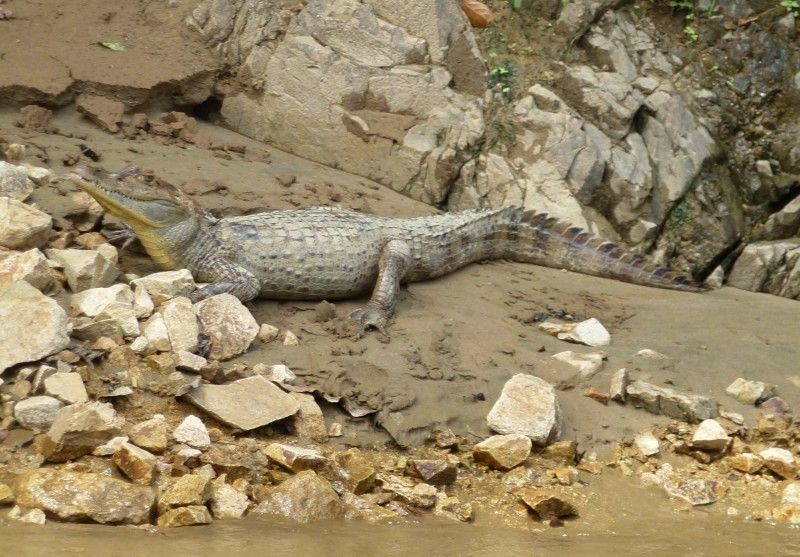 Even more exciting it became, when the crocodiles at the sight of us went down into the water.
Of course, we had hoped that the water pushes them a sense of danger, not hunger.

Optimism inspired cakes in which the Indians have traveled alone, without annoying and curious tourists. 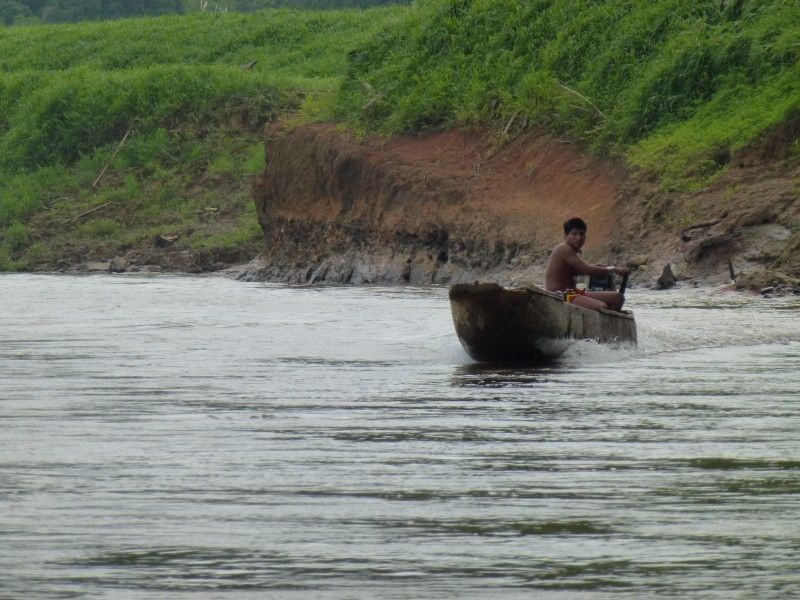 But of cakes as a submarine, nowhere to go, and we continued the journey. 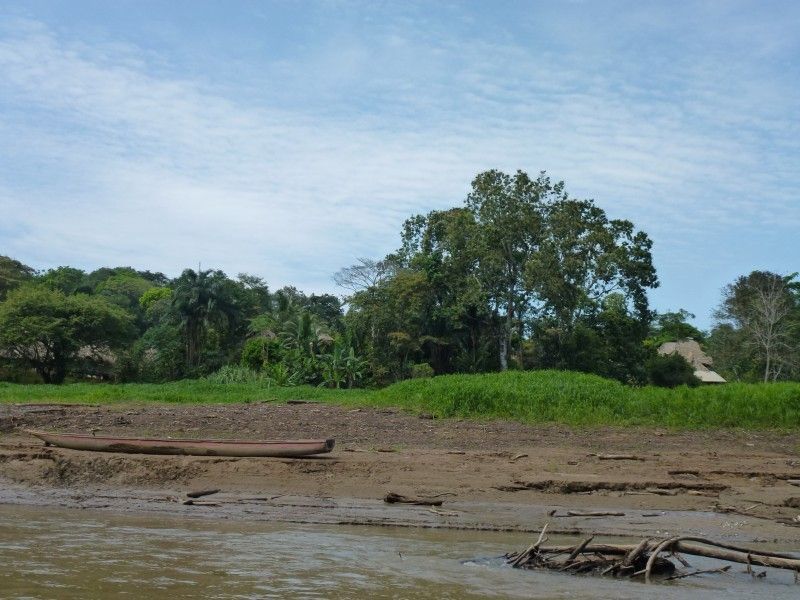 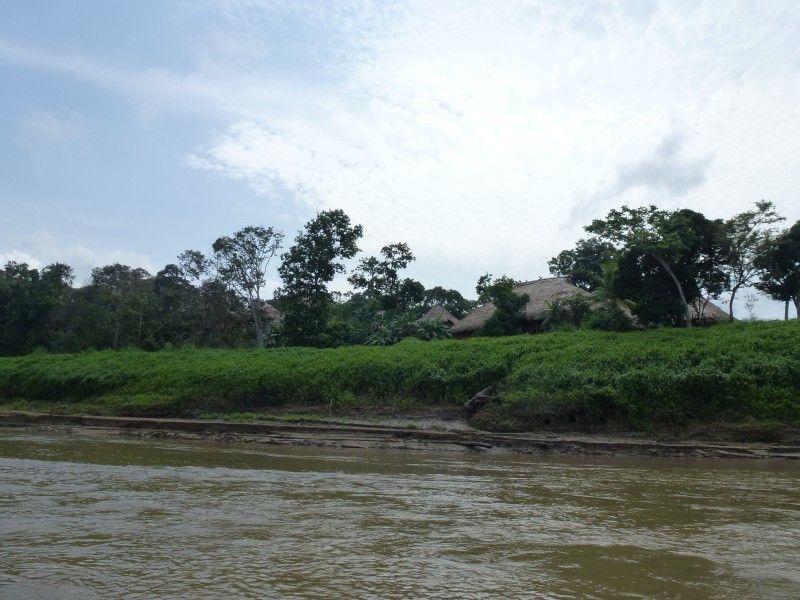 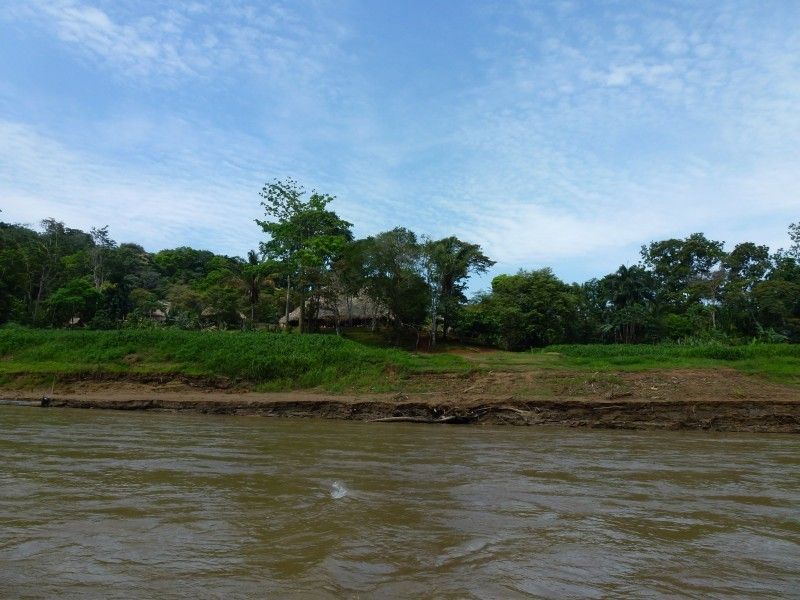 Respected local dogs, which seem not afraid of crocodiles. 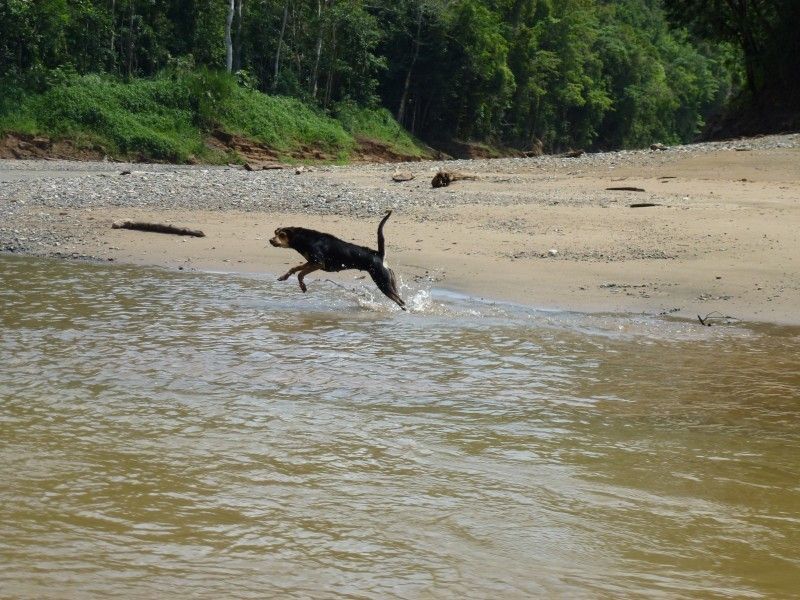 Sailed. Our path lay to the waterfall Chorro del Mono. If you come at the right time of year, you can swim almost to the waterfall, but now the river became shallow, we will continue a 15-minute walk over rough terrain. 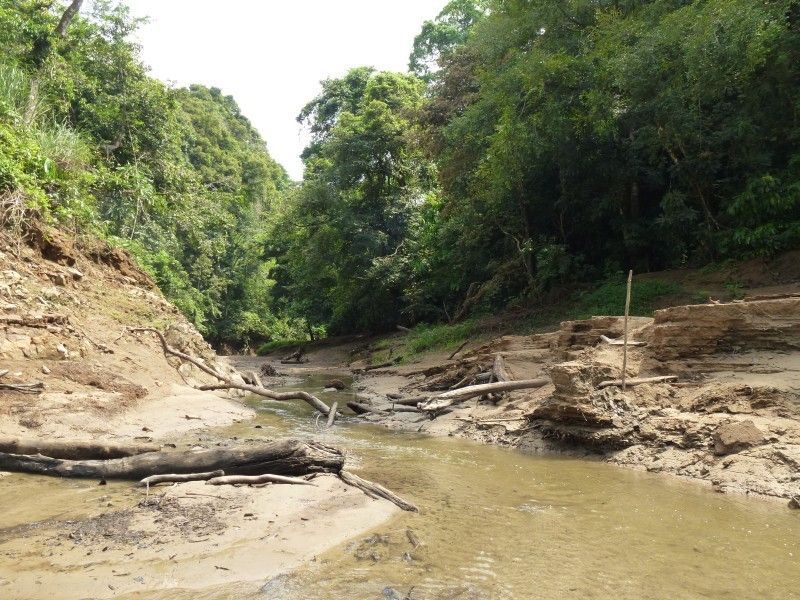 First, in the jungle. 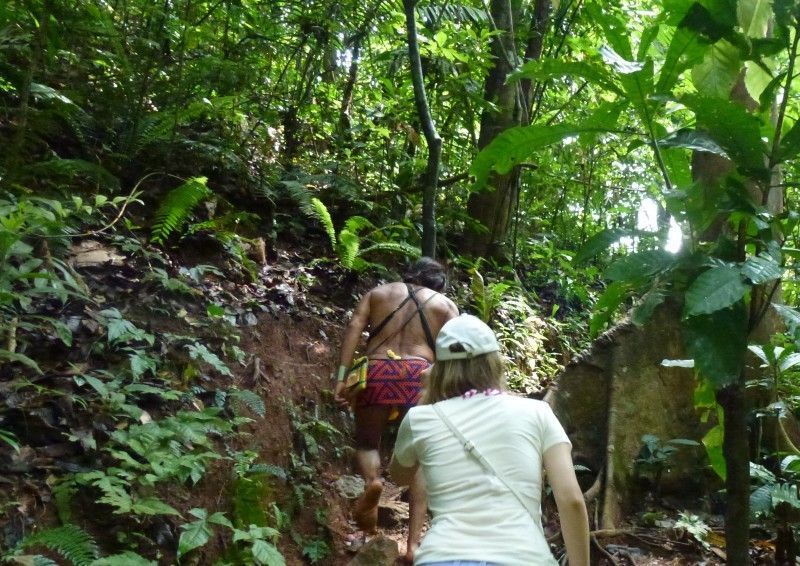 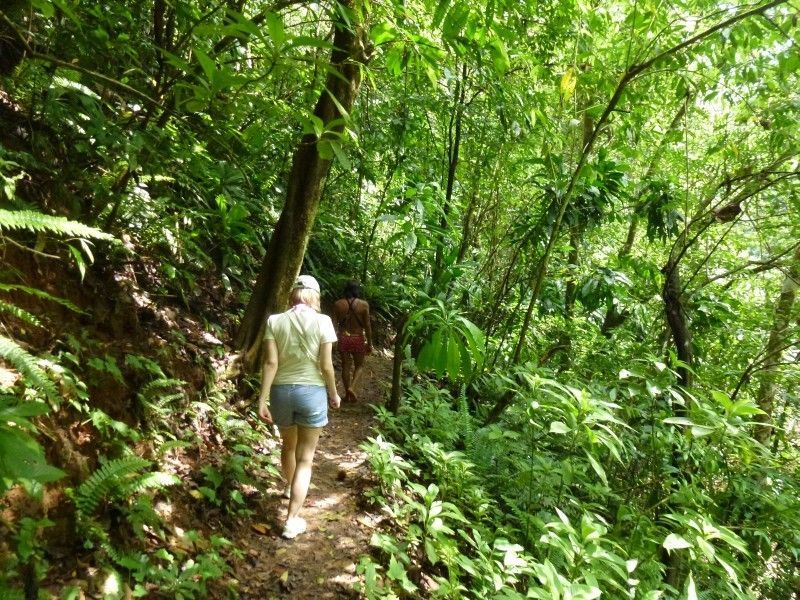 Then wade. Remember, this is exactly here crocodiles. 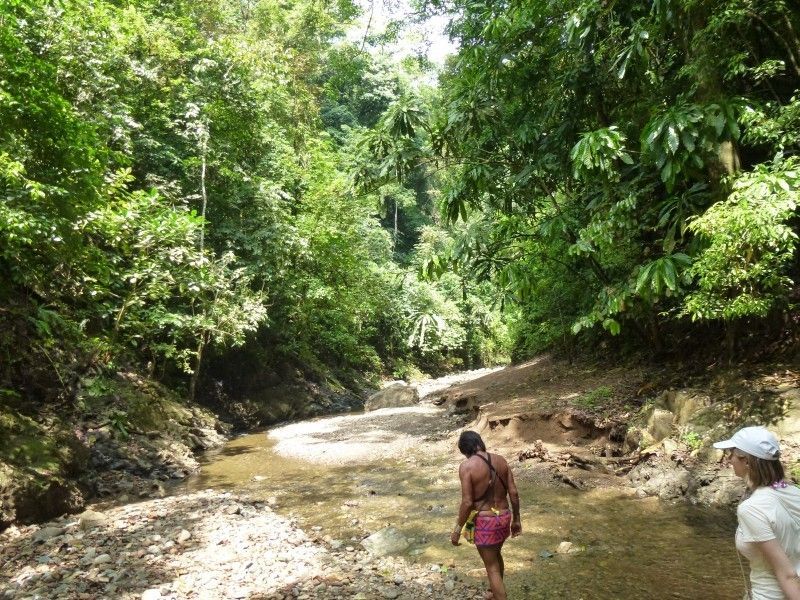 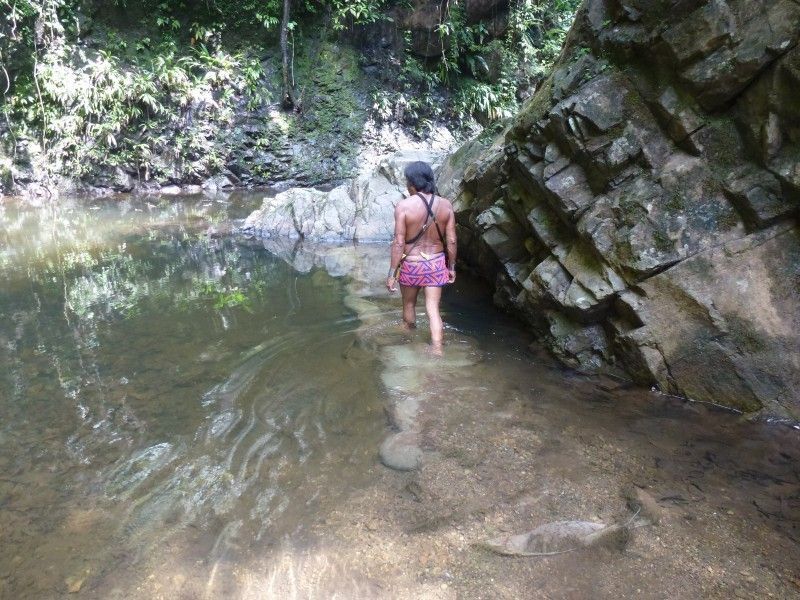 Remember this plant! It's very, very important plant. In the jungle without it nothing at all. 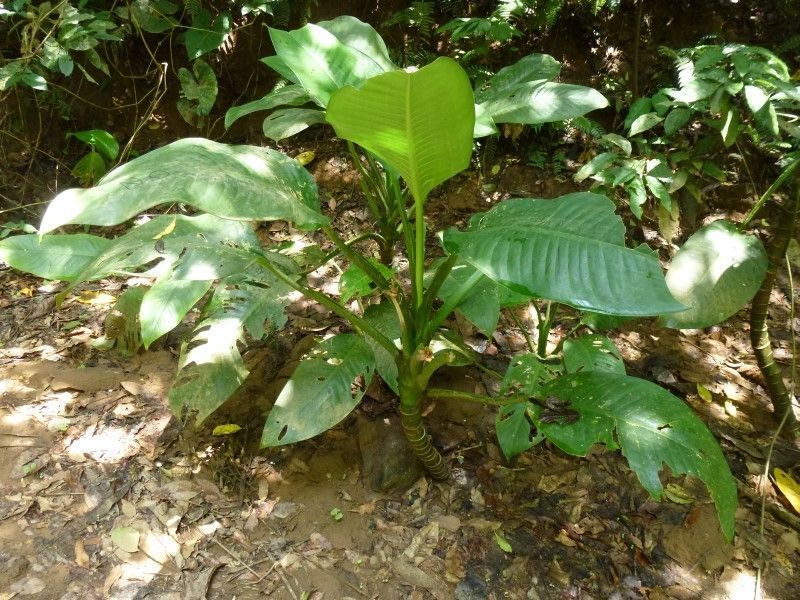 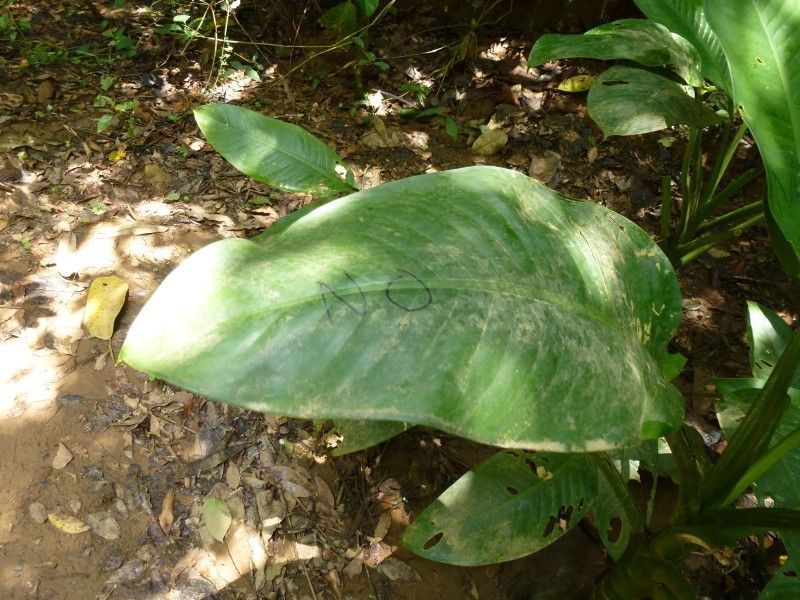 This plant - the perfect antidote to snake urine. Of course, we immediately wanted to check out how it works. Indians even agreed to help us find the snake. But even they did not know how to get him to pee. The idea had to be abandoned. Without meetings with uzhami and crocodiles we got to the waterfall. 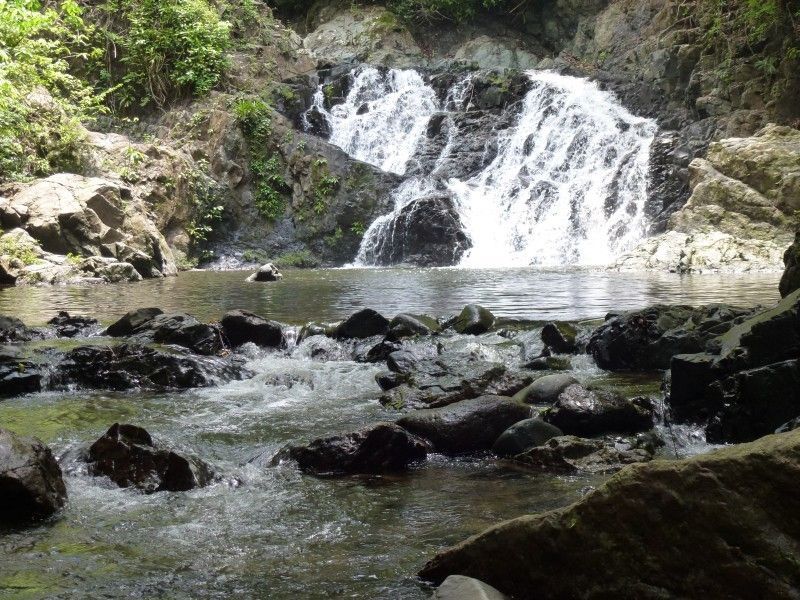 In the lagoon a lot of fish, two pleasures in one - and swim, and peeling. Profit!
And, of course, immediately rushed to bathe. Just me, a terrible coward, ran along the shore, tail between his legs.
Reading other people's records, looking at people bathing in the various waterfalls in the world, I was sure that my fate - and look to take a picture. But Sergei was of a different opinion. Persistently (command officer) invited into the water. When it is necessary to make fun of me was the whole group, the key Indian, I gave in. And it was a delight !!! I then even all the way back was proud of his own courage. Even despite the fact that the cowardly squealed when instead albeit unpleasant, but familiar skolzskogo stone arm came across something like this. 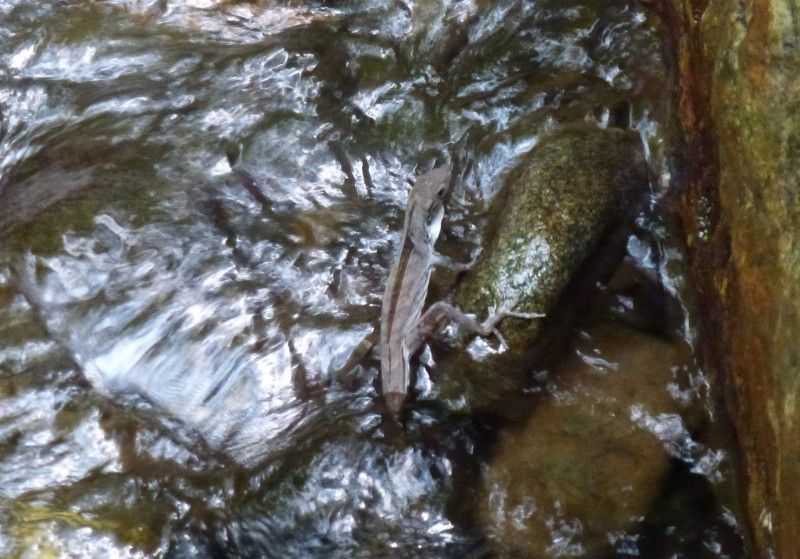 When you have finished bathing procedures, went to visit the Indians. But more on that later. 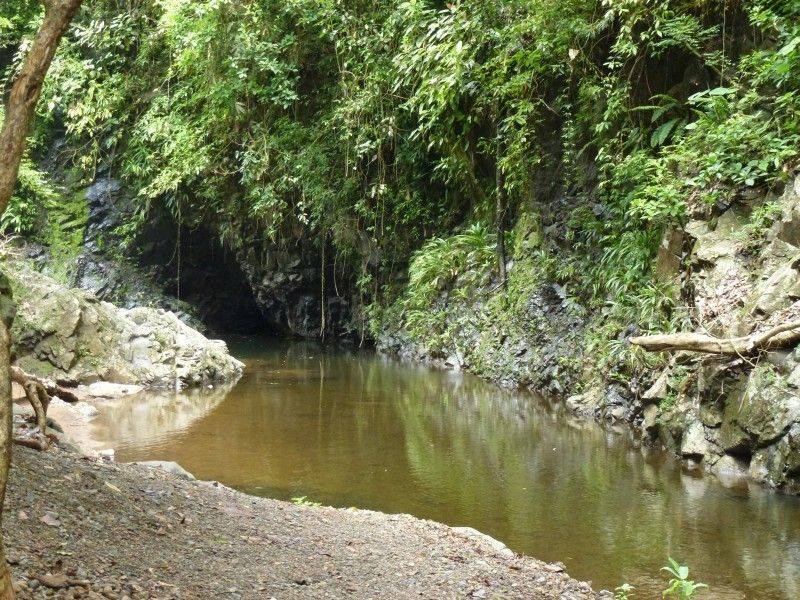