AdBlock detected. Site operation may be disrupted due to running AdBlock. Please disable it for this site.
Home Stories Netherlands

As we rested in the Netherlands

What associations you are having with a country like Holland? Windmills, tulips and marijuana. So it was with us before our trip, but that changed after - summed up at the end of the post. Our journey is tied to the defense of a thesis of our friend, whom I mentioned in my article PhD - the road to Europe. Immigration through the study. Therefore, our trip began with a small town of Groningen and ended in Amsterdam. 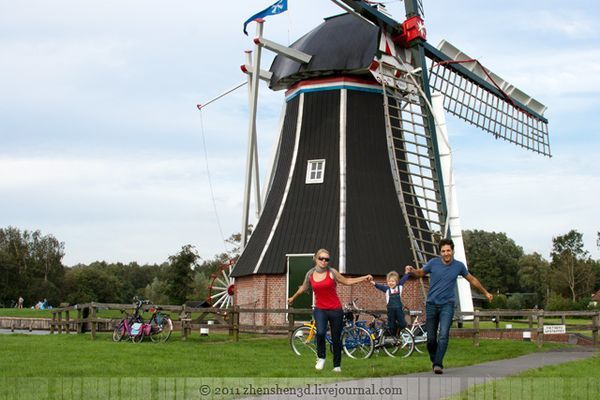 The decision was taken on a trip for 5 days prior to departure, but, in spite of such a short time to, we were able to find a cheap ticket from Venice to Bremen from Ryanair and from Amsterdam back to Venice at Transavia. Bremen easily and comfortably reached by train to Groningen. The two-year daughter could not get enough freedom of movement in the car after the strict rules avioperevozok, and we searched in vain for wi-fi, this train did not have it :) Outside the window flashed rural landscape: green meadows, grasslands and meadows again, often met at the horse pastures . 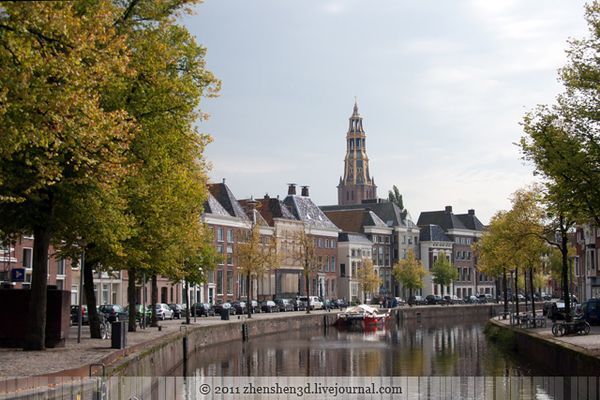 Groningen met us cloudless weather, which, according to local inhabitants, is extremely rare and we are very lucky. Coming out of the station and hitting on the main street, we are plunged into a violent student life. "Look both" - warned our local friend of dense velotrafike. And the great out there, if not more people, it is clearly as much! And if you yourself are wheel-less, then be kind to go: no loop sharply with the trajectory path and do not turn .. look sharp! Bicycles mostly old, worn, and many are not aware of the existence of transmission speeds and all this because of the student's disadvantage, and from the calculation, if a pack, then at least not for a thousand euros. Stolen-has put the usual big, usually sold at a substantial discount. In addition, each has its own large room, and if you want to ride the bike blameless when buying you can punch him on the basis of the police - as business as usual. :) 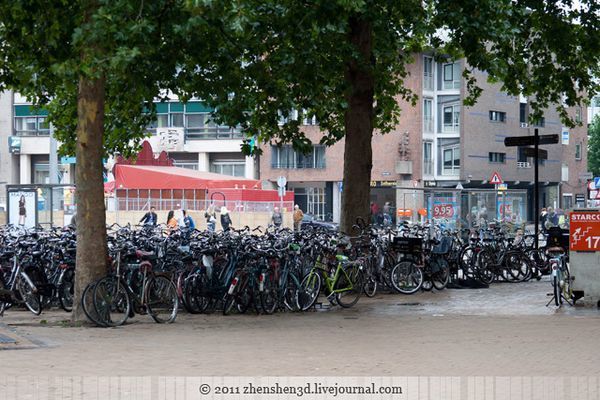 But with all this city very much, it feels and history, and the atmosphere is soaked drive youth. Walking through the streets of the evening, meeting young people to have fun, do not feel the danger of running into trouble. Students - intelligent people, well, except that stoned or drunk from it is more loud and cheerful, but the problems they do not need. Therefore, everything is walking together, going from pub to pub, which is in the city a dime a dozen. In establishments music playing very loudly Well, maybe because of that day and just outside the Dutch speak in a raised voice. 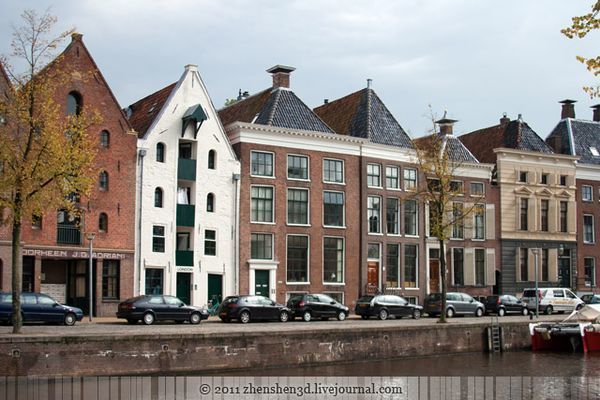 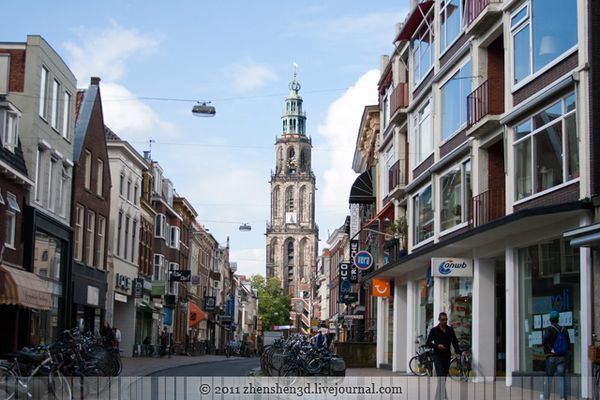 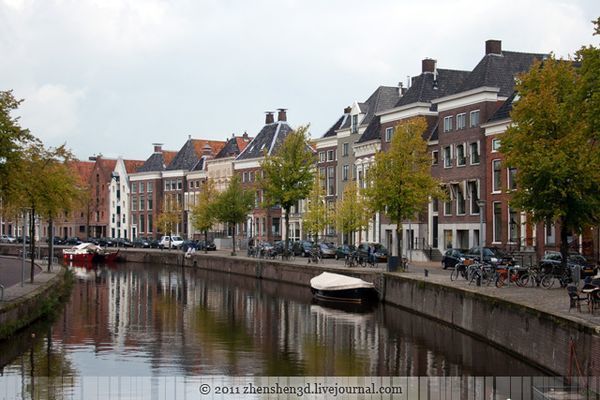 Pts wife liked the Irish and Belgian pubs, where beer selection could not help but rejoice. Due to the hands-free atmosphere in the bar every Belgian beer was applied in specific glasses. And, if necessary, to repeat, you just pick up your empty glass higher and bring you a new one. Belgian beers on the fan, many varieties have a degree more than 10%. 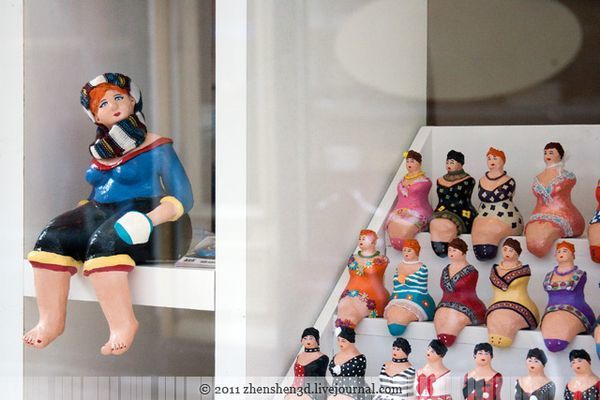 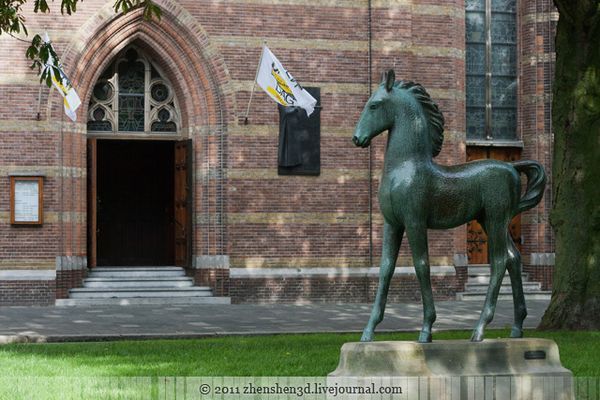 Struck by a large number of Mexican cuisine. Sushi bars and pizzerias certainly met too, but in the minority. Despite the large number of institutions obschepitovskie find affordable decent meal - great complexity, business lunch, business lunch is not in principle. A local prices, it should be noted, do not differ loyalty. Can compare with Russia, Italy and Slovenia, relative to the last will give a couple of examples:
A cup of cappuccino: Slovenia - 1.30 Euro, Netherlands - 2.30 Euro
Dinner for two plus two glasses of wine / beer bottles: Slovenia - 25 Euro, the Netherlands - 40 Euro
But as it turned out, the university, and many large companies have their own decent table. 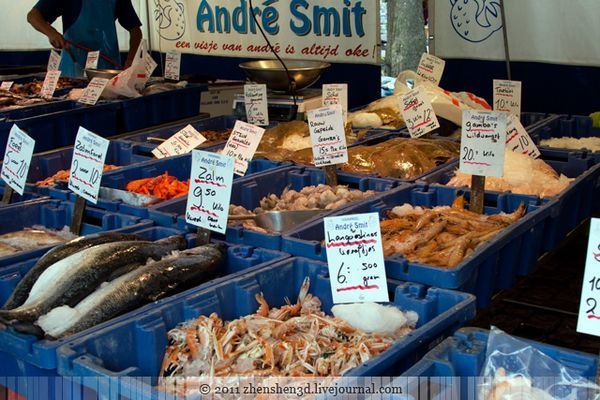 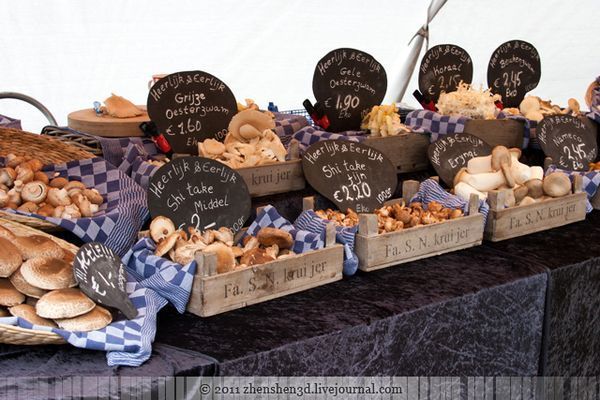 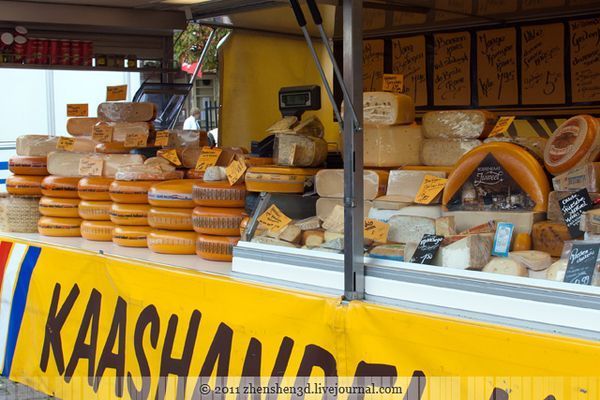 One day we spent in Groningen active rest, which were leased to high price 15 euros a day for 2 bikes, including a child seat. High rents without a helmet, including children, which is quite different from the Slovenian widespread practice. Clarify this point before the trip, children's hat for my daughter, we brought with us. The first item was the visiting park with lakes and a mill. One of the discoveries was the fact that the Dutch do not pray mill grain and pumping water. We were lucky that day mill was working, so we were able to see for themselves that there is flour and does not smell :)
The second item was our velotripa park with farm animals and enclosures for deer, which you can feed with palm grass. Parents travelers a place in Groningen highly recommended. 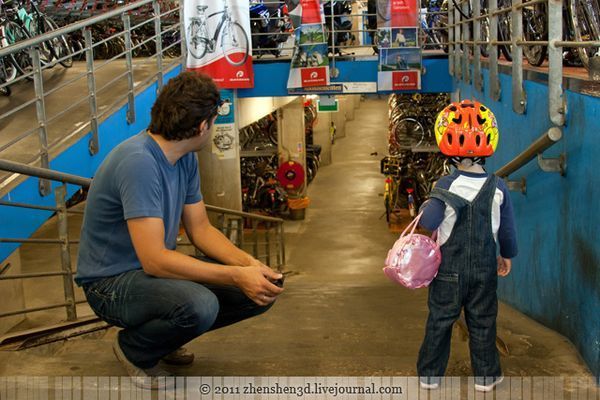 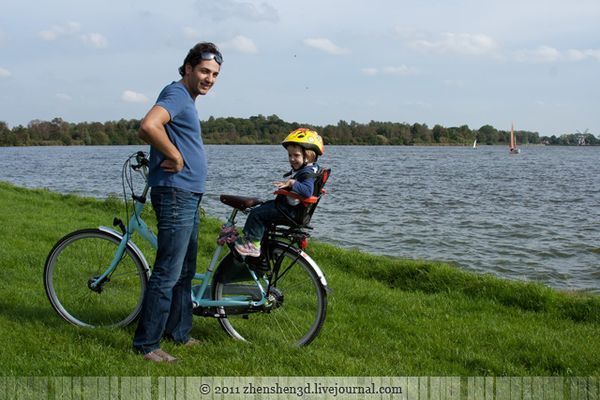 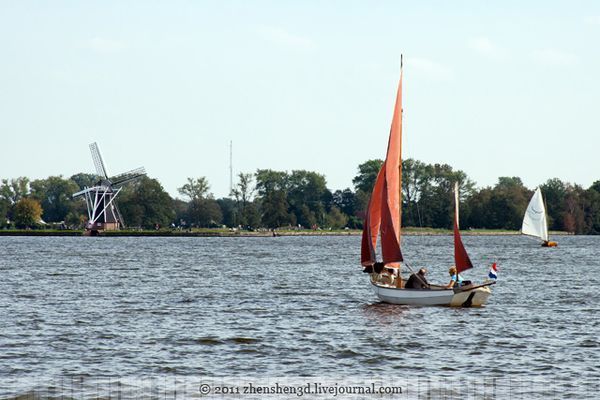 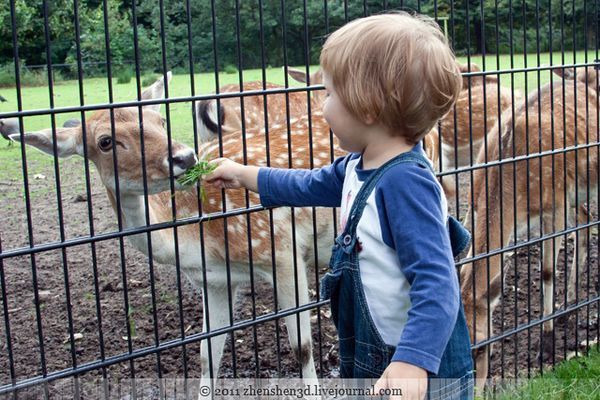 After three nights in a student paradise we went to Amsterdam. Prices for metropolitan hotels bite on Friday-Saturday's adventure prices increase by 30-40 percent. Since we expect only one night, we took a chance to stay in a one star hotel and no mistake! More on tripedvayzere we found that the location Pts good, and the rooms are clean. But we were lucky twice: Room on the top floor with a balcony overlooking one of the main streets! After putting her daughter to bed, we drank beer and enjoy the lights of the big city :) 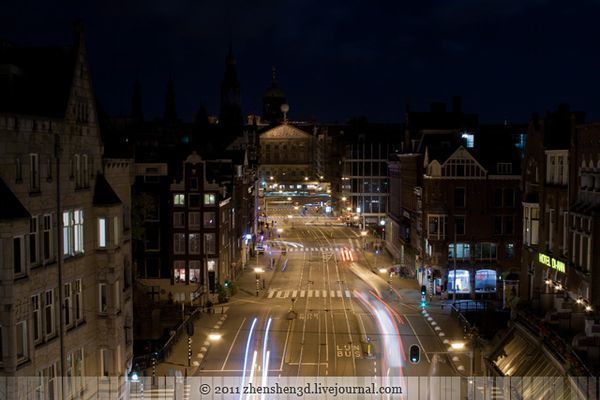 Well, actually about Amsterdam. Capital - it is probably in Africa and the capital. The rhythm of the city and the crowds prevented experience, learn, feel the atmosphere. Yes, around the gingerbread house, but they seemed in Groningen Gingerbread :) highly promiscuous people, solitary walks the streets at night, in my opinion, are not safe. But at night the city is transformed, light the lights, channels with bridges seemed to come alive. In some areas it is possible to walk quietly romantishno, in others you'll find a bunch of loud pubs where people who walks as he wants. 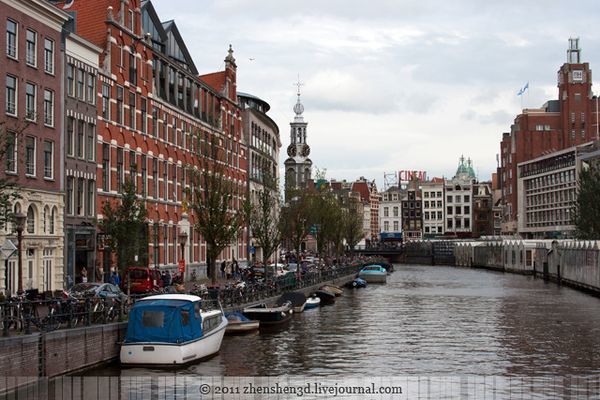 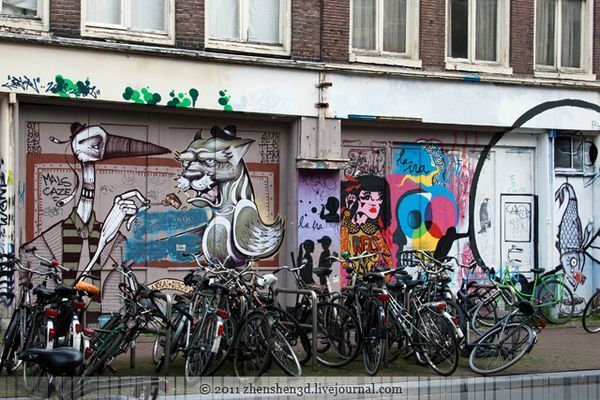 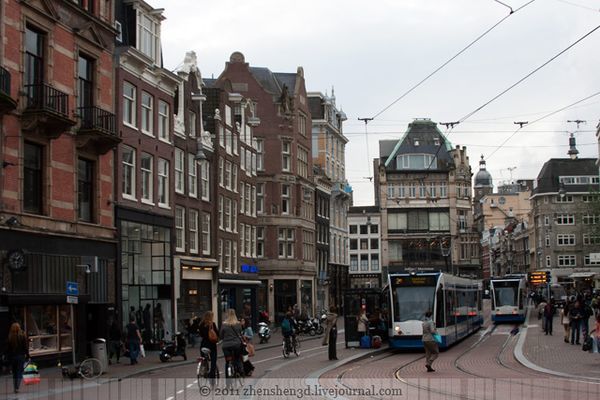 The next day, naps dochury we decided to still get probably the most famous Dutch street - Red Light District. It should be noted that this is not just a street that you can find on the map - a small quarter to get there we had to stray. And in the large windows, as in the windows, adorn ladies in lingerie, cute and not so. I like that is of great surroundings, maybe he is present, but when it gets dark. Photos in grunge style bear a separate post. In our every trip with my daughter, we try to see something for children's leisure in Amsterdam we went to the zoo. This is already our third European zoo, which we can compare with the Italian Lake Garda and the Czech Prague. Amsterdam zoo located in the city, perhaps because of this, it is no different scale and large enclosures for the animals, but he is very friendly and interesting. For my daughter was very interesting to see the young of various animals, such as lions, elephants, giraffes and even small infants gorillas! Put this zoo in our personal ranking second only to Prague. 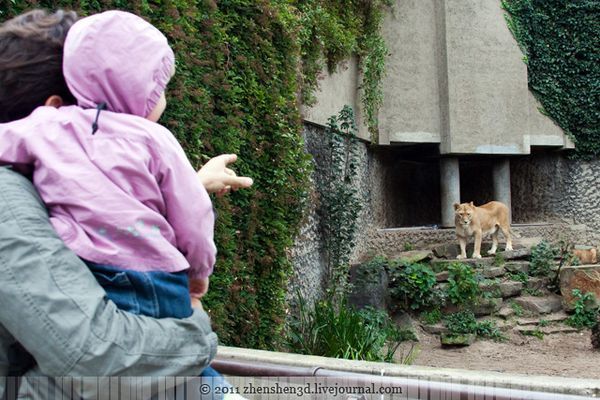 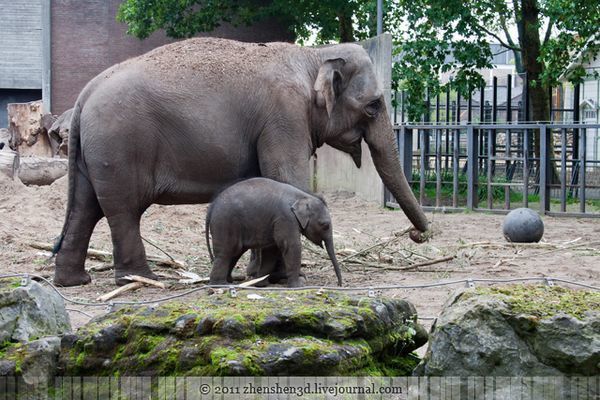 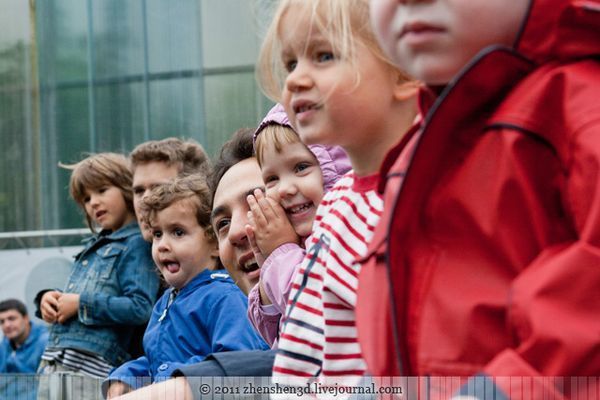 And finally, a couple of travel writing. Transport:  expensive, comfortable, fast, accurate. But we had no luck with it. On the way from Groningen to Amsterdam we laid three o'clock - it took half a day because of urgent repair railway tracks. The return flight to Venice delayed for three hours due to the fault of the Dutch airport. On the way to the airport on the train we missed his station without waiting for that last stop just three minutes! :) Internet:  free wi-fi almost anywhere, even in large shopping centers. Local yuzayut mobile Internet. On shareware interenet can expect in their hotels and in some trains. Toilet:  free toilet we met only at the zoo! In other public places in the restrooms in distant Soviet times sitting tetochki saucers and require you to EUREKA. By the way, the toilets themselves as from the distant past. And even in the Metn makdonolsah practice this wretched rule: - / But for a strong half of mankind in some streets of Amsterdam are just covered urinals, it seems to me that they then have to be frichadzh. And in Groningen, the words of a spouse, for small needs at night from the land nominated low-bars urinals. Which of course is an essential part of the city, with this ratio of students and drunk beer per day :) People:  almost everyone knows English. Many simpotichnyh girls with wavy long brown hair. In comparison with Slovenia is very small children. Dutch language - similar to the German with hohlyatsky accent. Emigrants:  in Amsterdam is difficult to judge, as there are many tourists Pts. In the province of immigrants, mostly Arabs, are clearly visible. They often prefer to move a handful and mopeds that Pts out of the general velokartiny. From the words of our friend, in Groningen emigrants little, but in some other cities, the number represents a significant percentage of the population. 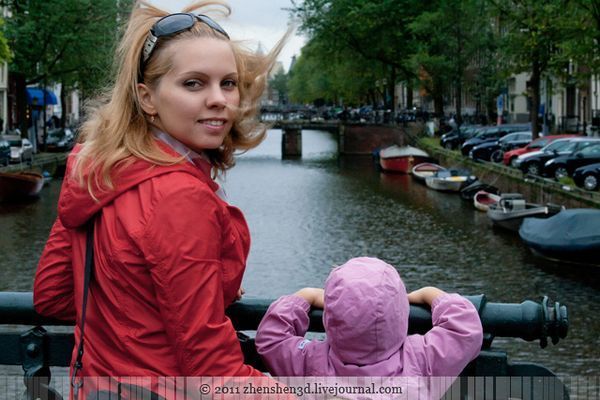 And to sum up. Netherlands - a country of contrasts. Mills - who do not grind, wi-fi in trains - but the toilets and saucers, freedom Drugs - safety on the streets. But love at first sight we have not developed. Of course, for five days - this is not enough to identify the country. Perhaps the state offers good social welfare and rainy weather can be used. In the meantime, we have formed the opinion that the Netherlands - a great country for students, and for the education of children, we would have chosen another.