AdBlock detected. Site operation may be disrupted due to running AdBlock. Please disable it for this site.
Home Stories Mexico

Mexico. Even the name sounds fascinating. Ancient Maya and Aztecs, Mexican bandits in a sombrero with Colt in his belt, sipping tequila in a dirty tavern ... been a while since I wanted to stay in this epic edge. And the case turned up appropriate - Cuban visa expired, we had to leave for a few days and come back. So, my Mexican 6 days with Russian gidskoy party. 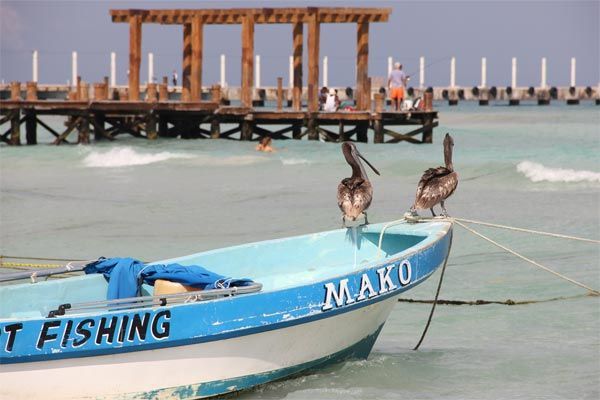 To begin with, that the flights, as usual, bought the day before departure, and of course on the dates of the economy options not found. Was either not travel from Havana to Mexico, and the next at a cost of transfer, the Dominican Republic, or still fly first class to Cancun and fly with a friend in the fun Mexican company Russian natives. Deciding in favor of friendship, and giving blood 360 dollars, I got great tickets to all consideration of the said class comfort. 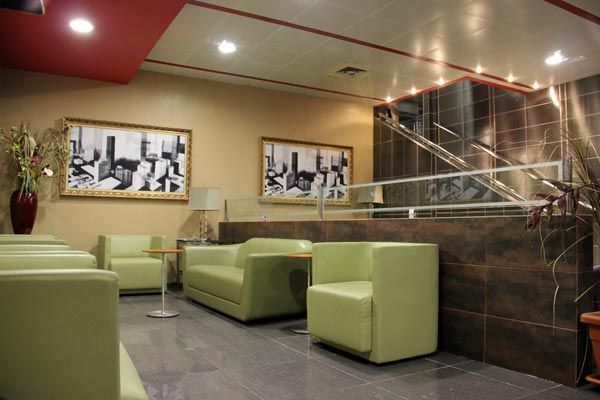 The difference is $ 80 (compared to the economy) includes: waiting departure in a special room with its own cafeteria and bar, the number of sets which is unlimited and free of charge; extraordinary penetration to any registration; comfortable padded wide seat inside the plane, along with the constant attention from the flight attendants, casting you all sorts of cocktails and snacks; and, of course, increased the number of staff smiles. After experience the comfort to get used to the normal economy regime will, I tell you, is not easy. By the way, the visa to Mexico for the Russian is not necessary, but do not forget to fill out before the trip special. form on the website of the Mexican Consulate and print it on your printer, or you cuckoo in native expanses. And the fans carry with them on their travels all his house, airline Cubana allows transport to Mexico baggage weighing up to 40 kg, at least from Havana and back. Airport tax before flying to Havana is 25 cookies, and in Cancun 296 Mexican pesos. The Rise and immediately sat down, and the path is probably the triangle, because the distance between Cuba and the mainland, about 250 km, with a girlfriend, we went to the bus stop. Drive from the Cancun airport to the bus station, located in the city center costs about 50 Mexican pesos (if you multiply by 2, will receive approximately RUR). On the advice of the aforementioned Oli, who has lived here for about two years, we have chosen for the seat for three days Hotel Ibis, quite a decent restaurant for only 50 dollars a night for two. In addition, for the convenience of this hotel location is most convenient for shopping and solving all kinds of rave cases, unlike all the other hotels on the beach braid made ​​at a distance of 15 km from the city. And here is the view from the window in our eighth floor: 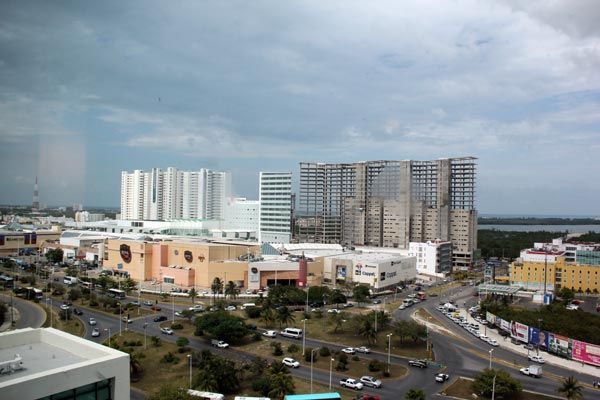 The first day I was not feeling the visit in Khimki, near the Mega. Cancun does not possess a special beauty. The small resort town of asphalt passionately, without a hint of green areas and all sorts of natural excesses bad. Sidewalks for pedestrians are rare, for whom the same comes into my head, go to the store on foot rather than by car, of which there are in abundance. Shopping centers of all kinds and directions resemble native Moscow. If necessary, having spent a fair amount of energy and positivity in the "black holes" Megamall, for certain goods deficit Cuban forces to search for them on the side, it was decided to finally join the local diaspora Russian comrades, of which there are abundant if not, then very much and not too little. On the first evening arrival we were invited to "dump" party girl Masha working guide in Mexico, where there were at least ten local compatriots and friends. On the second day visited by the old comrades who moved from Havana to Cancun and we were treated to a delicious "Margarita". And on the third day of Walk around the familiar round. firms employing a few dozen friends. 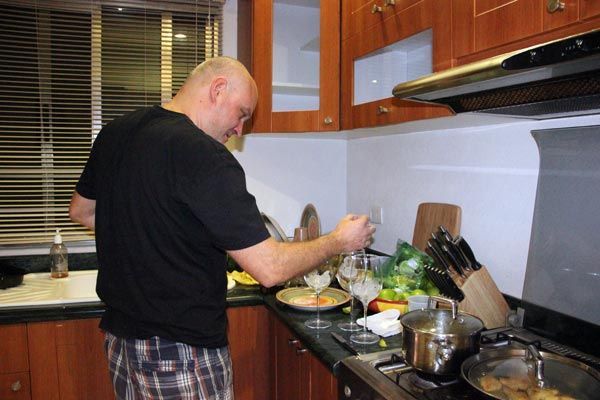 Thus, exotic travel to overseas countries, well, very much reminded our visit to Moscow three months ago.
Breaking the cycle of visits and shopping, I went on the very same beach braid with hotels, which settle all visiting tourists, mostly Americans . 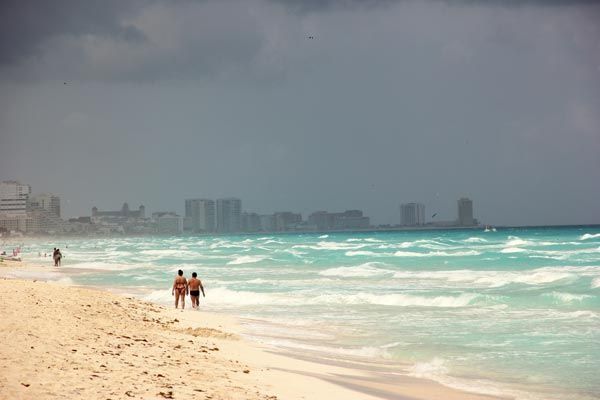 Some exclusive features wreaking braid does not have just a long, narrow strip of sand, the envelope of the city with the letter "G". But the color of the water did not leave me indifferent, a cerulean hue, say, gives some mineral abundant dispersed along the coast. The beach itself is pretty quiet and deserted, compared to Playa del Carmen, which later. The impression is that Cancun is visited by older people waiting for the rest of your vacation with white sand and blue ocean. To get to the spit is not difficult, for with public transport in Mexico is all right, and the fare is good: half-empty vans by type keyway, traveling about the city limits at intervals of 1-2 minutes, take 6 pesos for the ride. The cost of a ticket to the beach a little more expensive, 8 and a half pesos. For lovers of comfortable ride in a taxi, a single tariff for the central part of the city about 25 pesos. Full of shops Cancun, I had already independently, for Olga goes back to Havana with a clear conscience and an empty purse, go to a place called Playa del Carmen, which is home to our friend and part-time local guide - Volodya Tyuryaev. 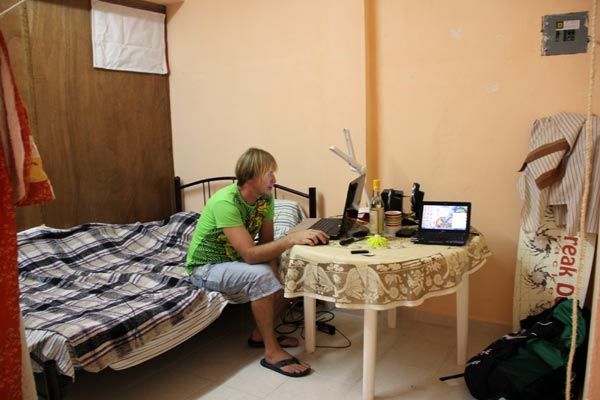 Playa - a special place, a small resort village 60 km from Cancun, sprawling along the coastal line, something reminded Anapa with its many shops and small cafes on the boardwalk, but something unorganized Kazantip with forever tusuyushchimisya crowds that change various dancing clubs of which there are abundant, every 20 minutes. On the first evening, almost jumping off the steps of the bus, Volodya took me to the place of the World Championship Kitesurfing MINI Kiteboard World Tour PKRA in the disciplines Racing & Freestyle Pro. 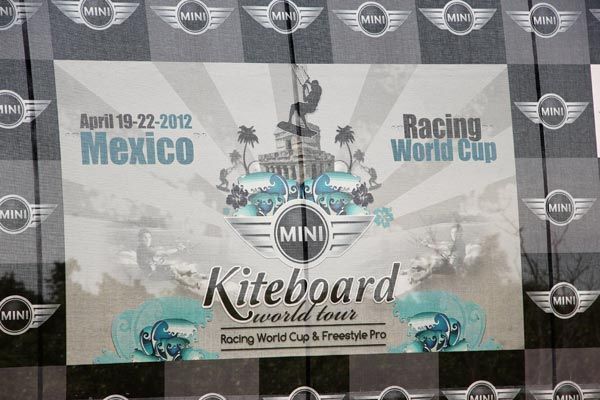 I had no luck, the four days of competition, I got only the last, when, due to the complete absence of wind, canceled races and just held the awards ceremony. For some time, though athletes are expected slightest poryvchika, and even the most optimistic inflated kites. 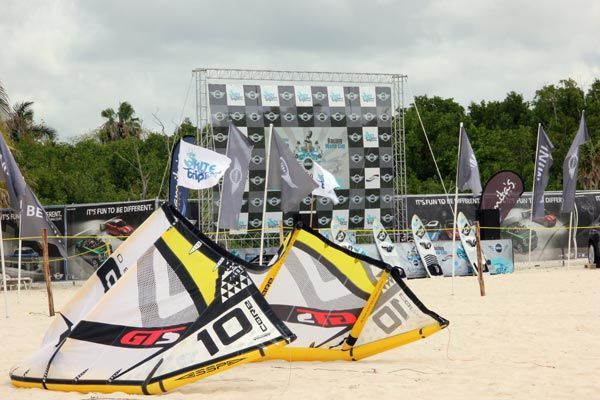 With fading hope, more and more participants began to engage in all kinds of beach garbage, which somehow helps to forget, like this Mexican raydersha surfing paddle tirelessly wield them for a few hours. 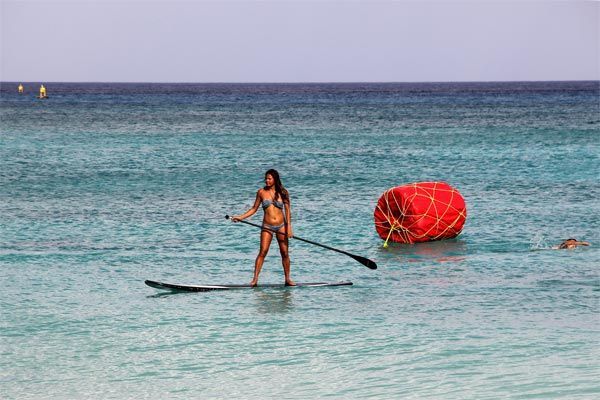 Or guys who have chosen something like ping pong but without the table. 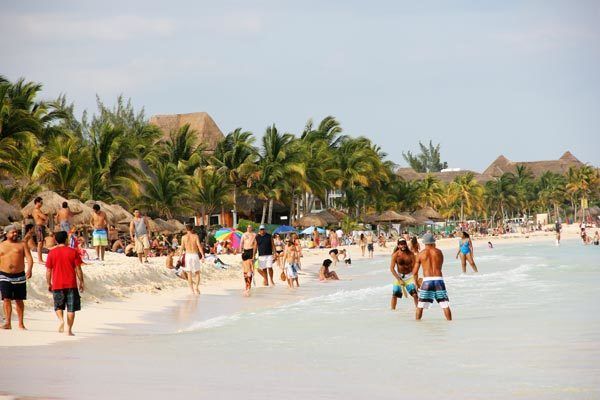 The rest lazily lying in extended positions on the boards of warm chill out before a final decision to stop waiting and go by the alcohol-you like this part.
And even though I have not seen myself rolling, but will put none of my photos from the early days of the competition, nadybat site of the Event. 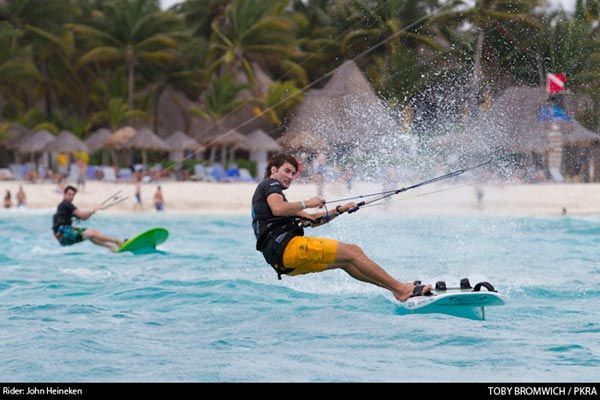 What struck me most in Plae, what this seemingly small town, far away from civilization, can be a constant dvizhuha. The impression that the settlement did not sleep that it is inhabited by millions of tourists, merry, dancing, playing volleyball, getting married here and do many other things. Taking just 500 meters, we visited two weddings: 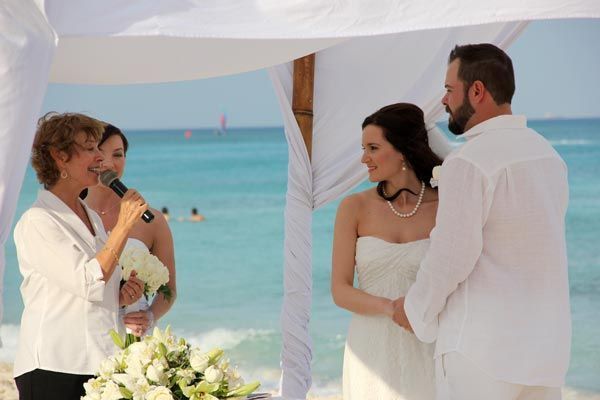 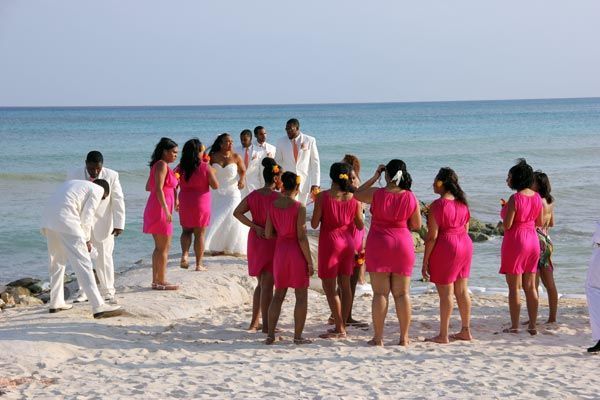 Of course, not everyone can afford to relax and fiesta even in resort areas, such as these comrades engaged photoshoot: 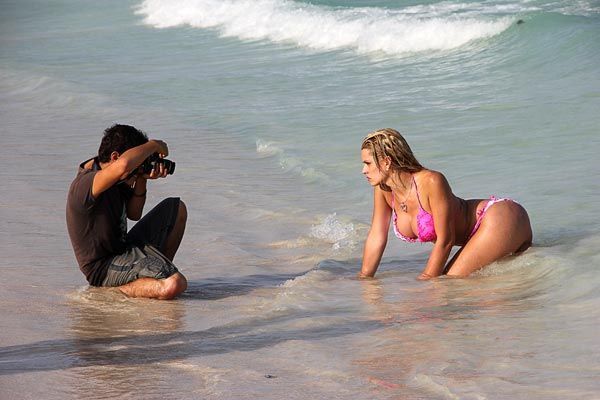 Sitting in Plae del Carmen hotel is not in the room, bustling and 11 at night reaches its climax when dressed up Man About Town hurry to plunge into the club life that you can do every 10 steps, for local clubs jostle each other throughout the waterfront and have any barrier walls, so that passers-by heard the roar of the speakers and danced seen visitors. 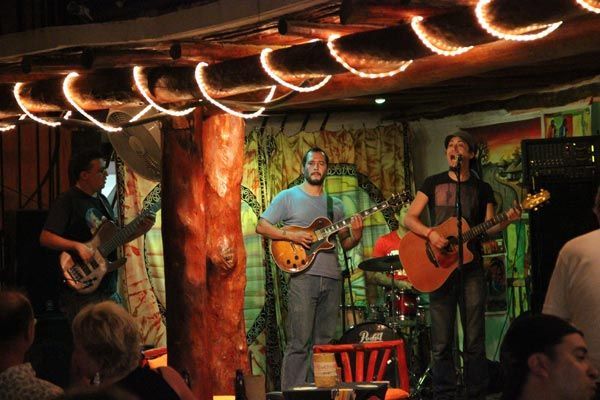 Entrance to most clubs free, music and bar for every taste. Provided for girls night of bliss called Lady's night, during which the whole bar is given in our delicate hands absolutely free. These specials. proposals exist for each club on different days of the week, so knowing sow situation, female company can budget to "walk" the entire vacation. Also Plae is famous in the area Club Coco Bongo (as in the movie "Mask" with Jim Carrey), works he is on a "pay 55 bucks for input, and do anything within your restless soul." This club is very popular and collects huge queues outside. 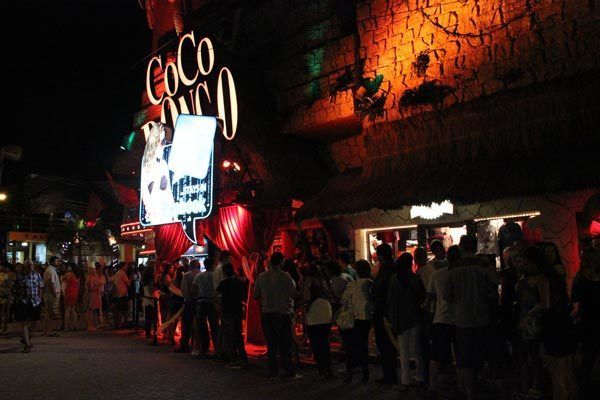 Well, as in any surf or kite beach, Plae has its own bar for their entitled «Pura Vida». I took pictures until ten at night, so we found a bar in the form of a quiet and cozy chill out without the crowds gomonyaschih athletes, but after 23.00, to return back without the camera to shove inside was impossible. 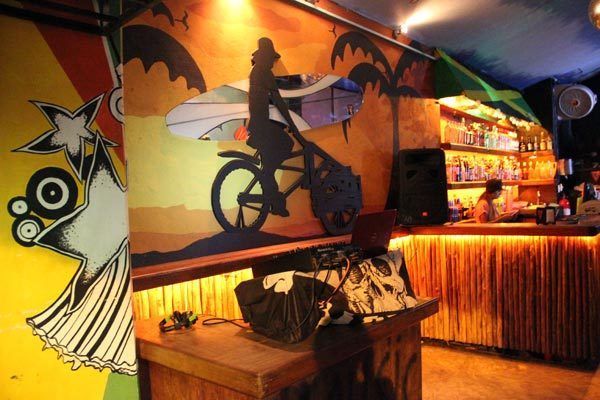 Dancing and long walks, are known to cause not only fatigue, but also appetite, which is not a problem at all sorts of eateries abound Mexican streets, where a hungry tourist can buy food under any version of the purse. I, as an avid homeless, fell to the liking of the local eatery & breakfast 30 pesos and a quick snack several tacos, stuffed with a variety of toppings fire. 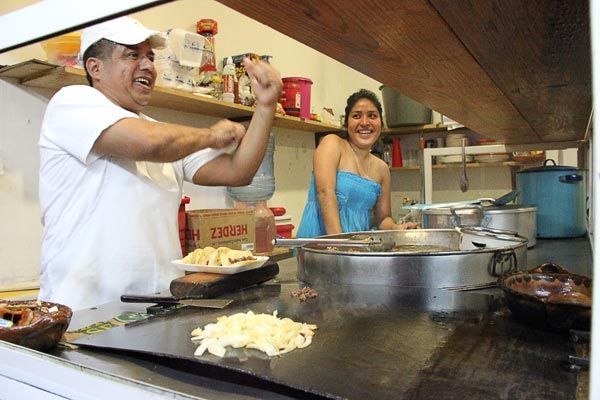 Eternal holiday - it is certainly good, but forget about Mexico from the historical point will be a big omission. Numerous stories about doomsday predictions and the invasion of aliens has long been heated curiosity newly arrived tourists. So I went to the ancient city of Tulum to the ruins of the port city, belonging to Maya civilization. 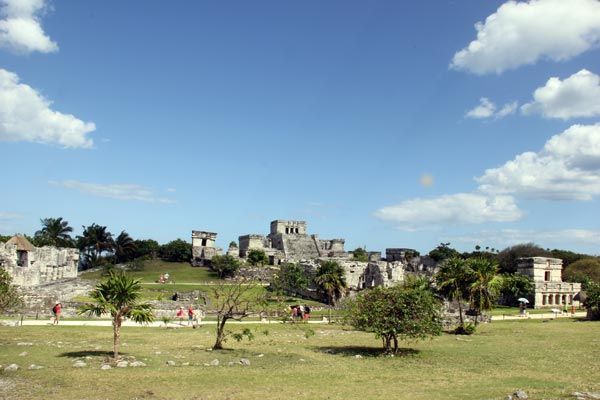 Volodya helped me fit in nicely tour group of his friend, also worked in Mexico, English speaking guide. The inevitable fate for a walk in the company of thirty compatriots more than compensated contemplation of ruined stone buildings, most of which are carried in the past destiny as animal and human sacrifices. Hewn faces of gods on the ancient walls accompanied us look their huge gray sockets. Giant iguanas basking in the sun, substituting scaly bellies under heat and not waiting insidious pendalya from light brown to tourists. The town of Tulum was neither in size nor significant even in the distant past, but its scenic location on the azure shore of the ocean makes a run with the camera, enthusiastically shooting postcard scenery. 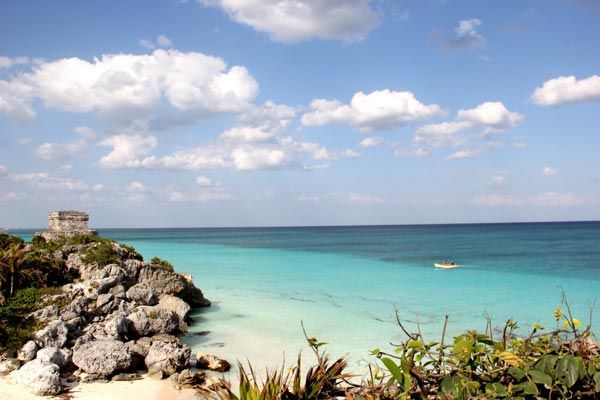 Impressions of walks were the most favorable, though in the end has not been the same without incident when the tour guide blithely gave permission for some of their wards to climb over the fence and be photographed in close proximity to the most protected antiquities. Naturally, Russian inquisitive mind, to torment eternal questions and thirst for adventure is breathtaking permission to open horizons, as for example climbing on the high wall of one of the pyramids, which was committed by one of the "brave heroes of the day." The cries escape from all corners of the guards, our friend had to hastily down the fragile structure down, causing excessive fall of the ancient bricks and eventually complete shedding of one of the walls. Such eyes wide with terror keepers, contemplate the inevitable destruction of relics in dead silence, I have not seen in his short lifetime. Later culprit and guide were taken to further debriefing to the police, and all the rest peacefully finished sightseeing collective swim at the foot of ancient pagan temples. 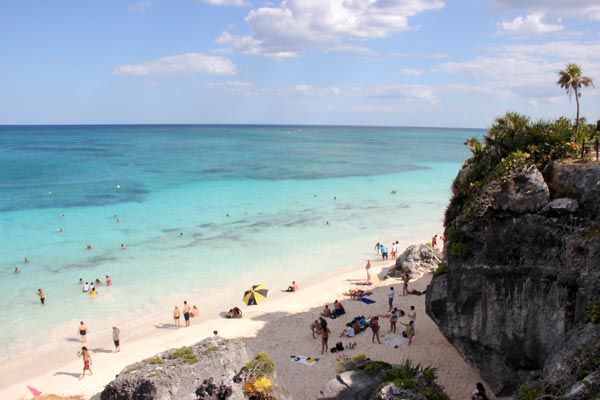 So in constant motion, meetings, fun and enjoying excellent leisure facilities and spent my 6 Mexican days left in the memory of the eternal spirit of the fiesta.