Mexico City - the city of the eagle and the cactus

Mexico
The capital of Mexico, Mexico City is one of the most populated in the world. Now about 9 million people live in it. within the legal boundaries of the city and over 21 million - within the urban agglomeration (9th place in the world). It was built on the site of the Aztec Tenochtitlan, which at one time was also one of the largest cities (up to 500 thousand inhabitants, it is believed). But little is left of those days. Modern Mexico City is a combination of Spanish colonial architecture, art deco style, glass skyscrapers and numerous poor neighborhoods on the outskirts. 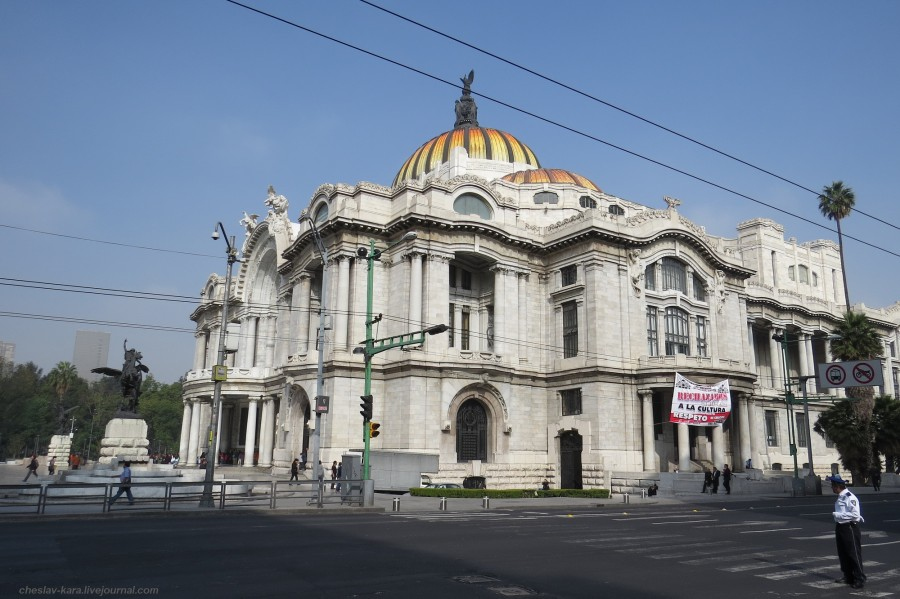 Our acquaintance with the Mexican capital was very brief, literally "in one touch", but how did it happen:
Next 25 photos (taken in 2015):
View from the hotel in the morning. There are many high-rise buildings in the center of Mexico City: 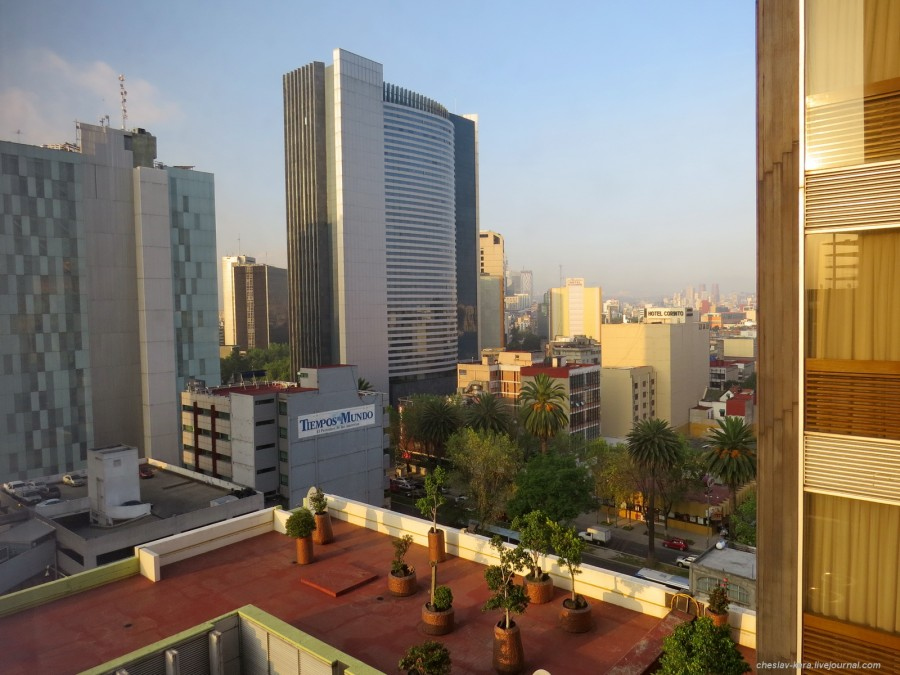 () on the (). It is considered the highest triumphal arch in the world - 67 meters.
The history of its creation is very remarkable. In 1910, President P. Diaz decided to build a huge Legislative Palace here, which was supposed to house the Mexican Parliament. But in the same year, the Mexican Revolution began, and in 1911 Diaz himself was overthrown. Construction continued until 1913, after which it was abandoned. By that time, a metal frame of the central part of the building with a dome had been erected. Only after more than 20 years, in 1935, it was decided to turn the unfinished building into a monument to the revolutionaries. The metal frame was lined with stone, sculptural compositions were installed, a museum of the revolution was arranged inside, and some of its heroes were buried, incl. Pancho Villa. 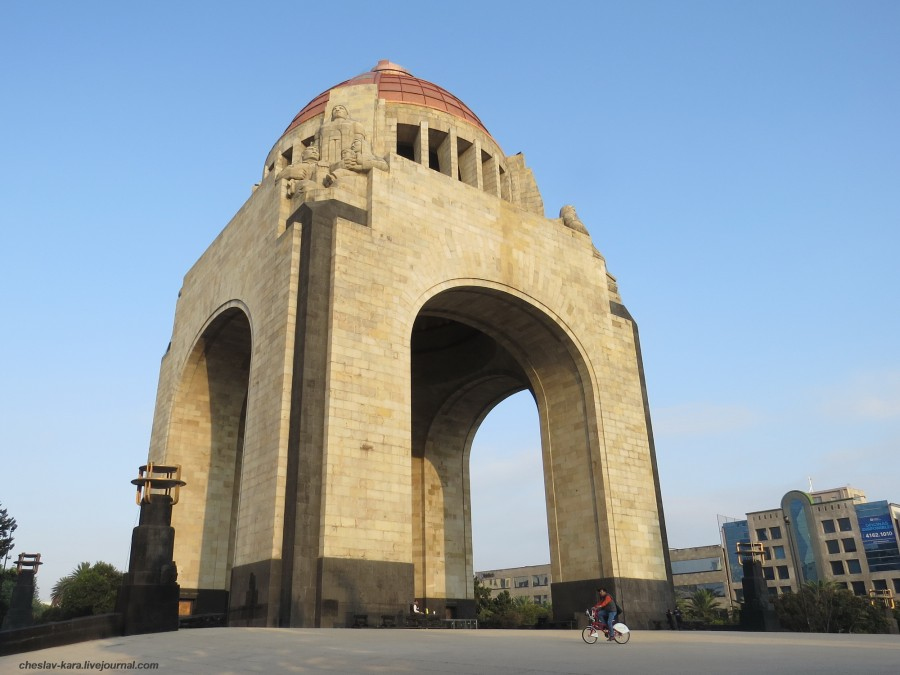 We are going to the center (the yellow sculpture in the foreground is a horse :) ): 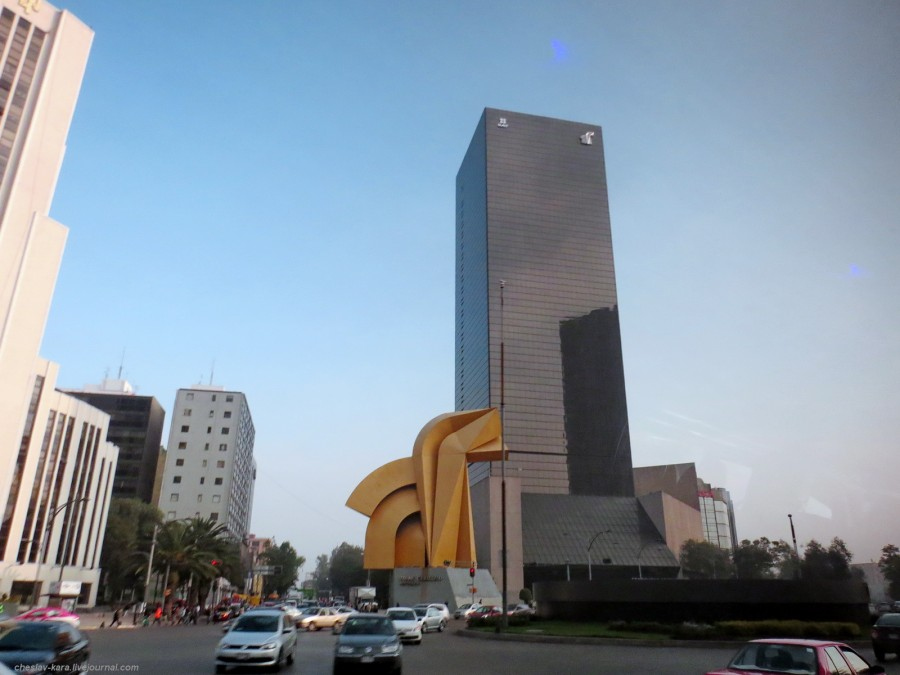 According to legend, the god Huitzilopochtli told the Aztecs to settle in the place where they would see an eagle sitting on a cactus and holding a snake in its beak. The Indians walked for a long time, and finally saw the described scene. This is where Tenochtitlan was founded. It was one of the largest cities on earth. It is believed that by the beginning of the 16th century it had about half a million inhabitants. The city was surrounded by a complex system of reservoirs, so that it seemed that it was an island in the middle of a huge lake.
Sculptural composition illustrating the legend of the founding of the city: 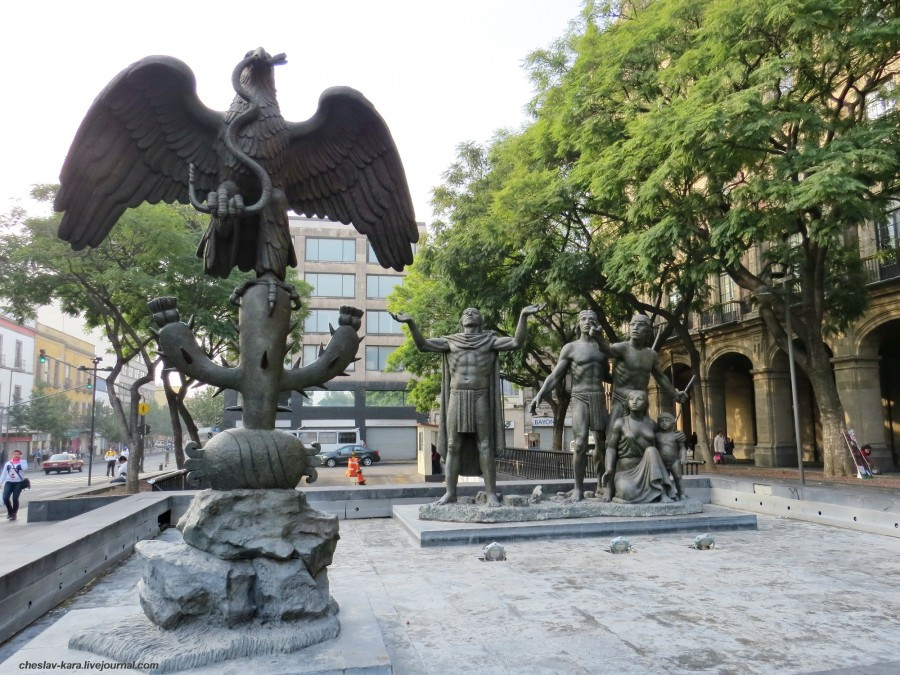 On May 13, 1521, on the second attempt (the first was in 1519), the Aztec capital was captured by the troops of Hernan Cortes. The Spaniards renamed Tenochtitlan Mexico City and made it the capital of the province of New Spain.
On the site where once was the palace of the last Aztec emperor Montezuma II, now (), she (Zocalo). It is believed that this is the largest area in Latin America (approximately 200 by 210 m). Unfortunately, during our visit, the entire center of the square would have been blocked, preparations were underway for some kind of event: 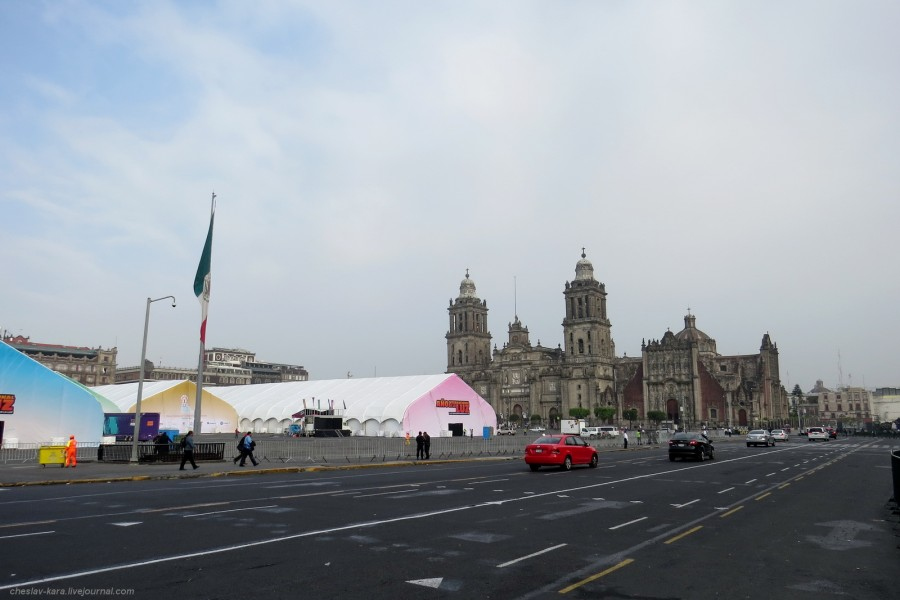 The façade (Palacio Nacional) overlooks the square from the east. Its construction began in 1522 as a residence for Cortes. It is now the official residence of the President of Mexico. 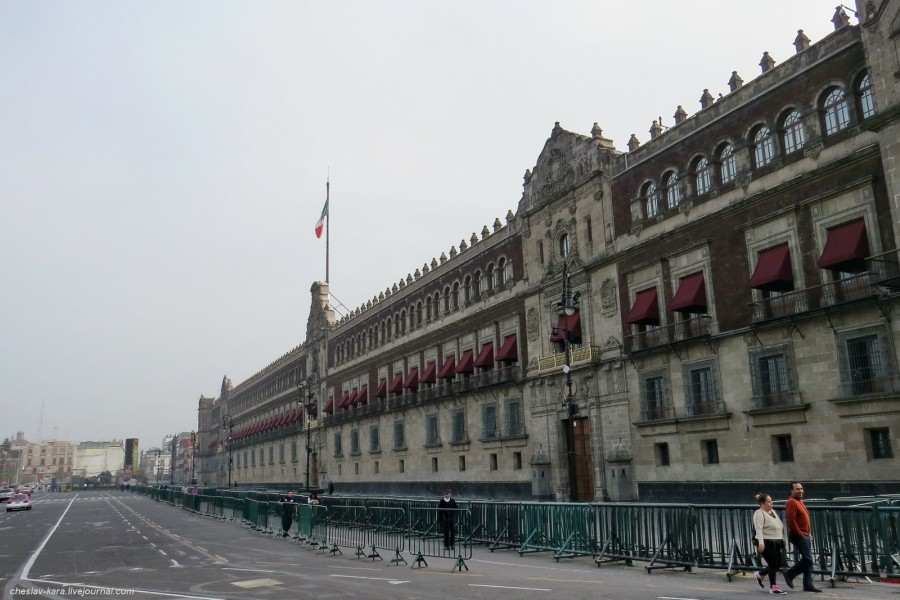 On the north side - the majestic, the main temple of Mexico. Under the Aztecs, the temple of Huitzilopochtli, the god of the Sun and war, was located on this site, which the Spaniards destroyed and built a church instead. In 1573-1813, instead of that relatively small church, the current grandiose cathedral, one of the largest in Latin America, was erected. 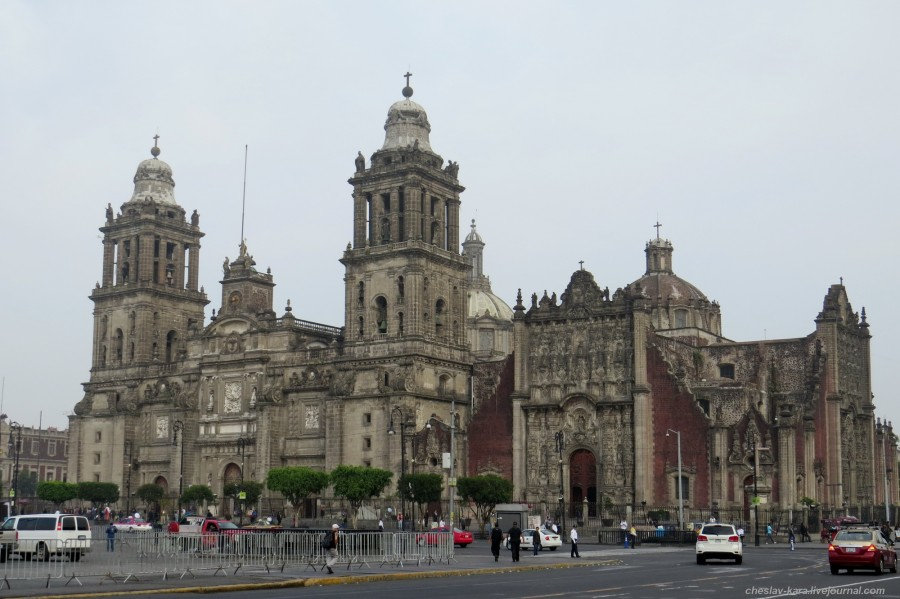 On the facade - a cactus, an eagle and a snake 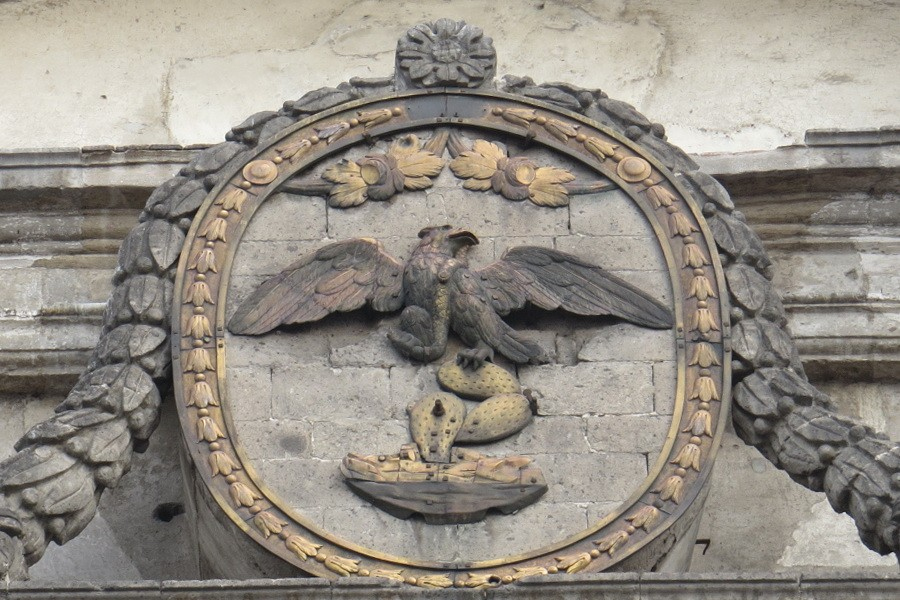 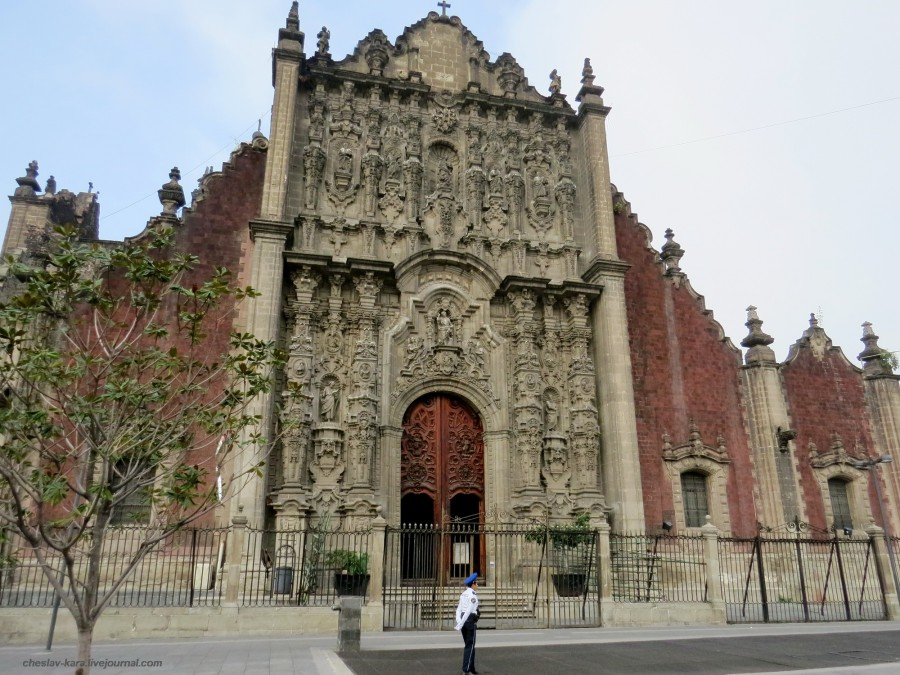 From the outside, from the inside, the cathedral is huge and heavy in Spanish (5 naves, the central one is 110 meters long; 40 columns support 74 arches). Luxurious baroque altars: 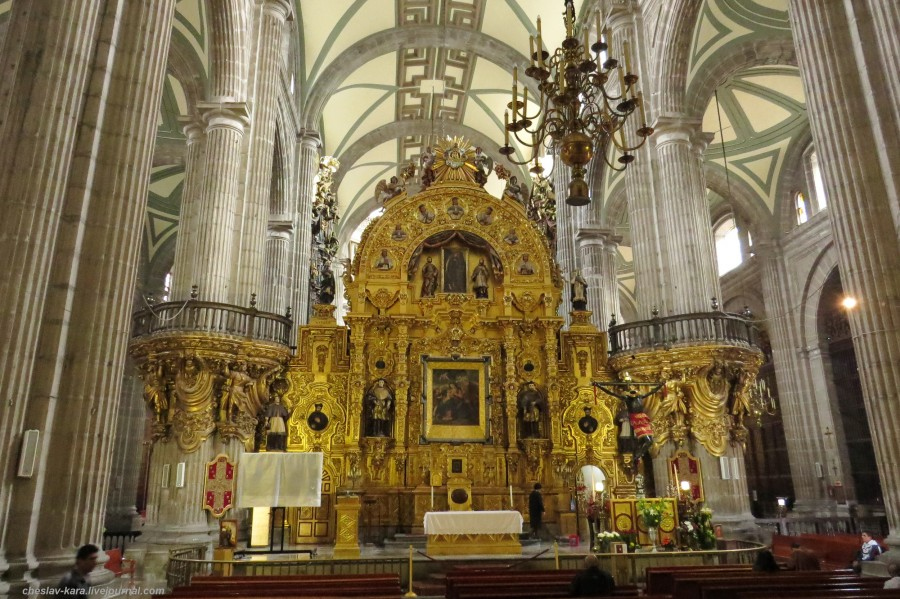 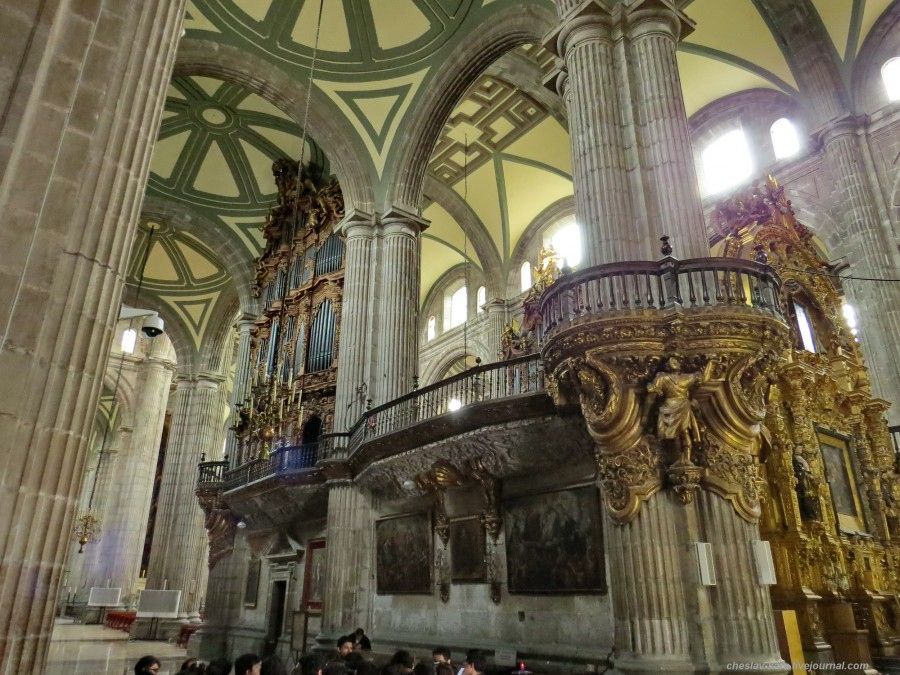 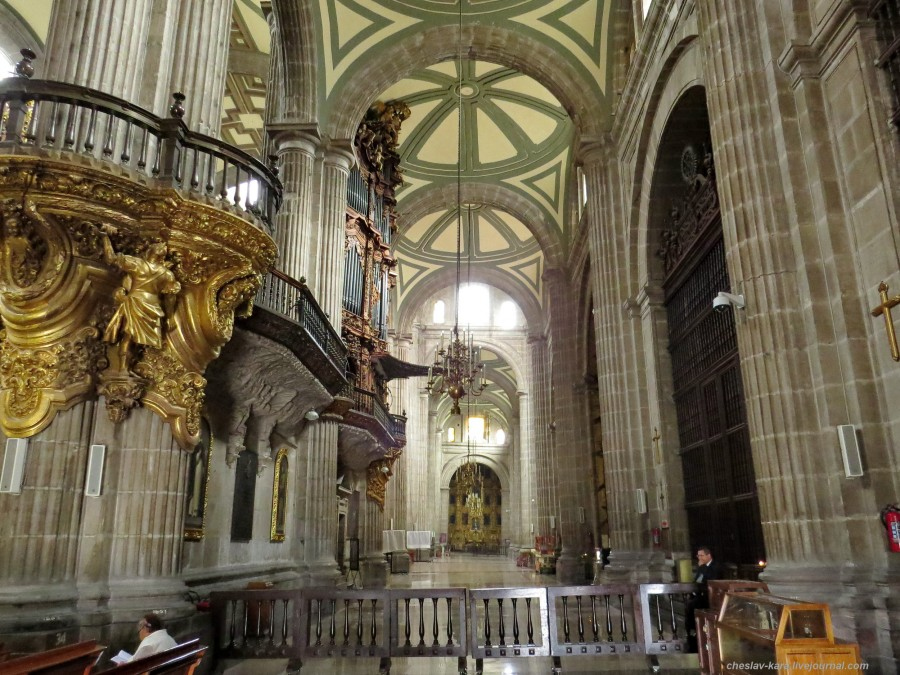 Other buildings around the Zocalo: 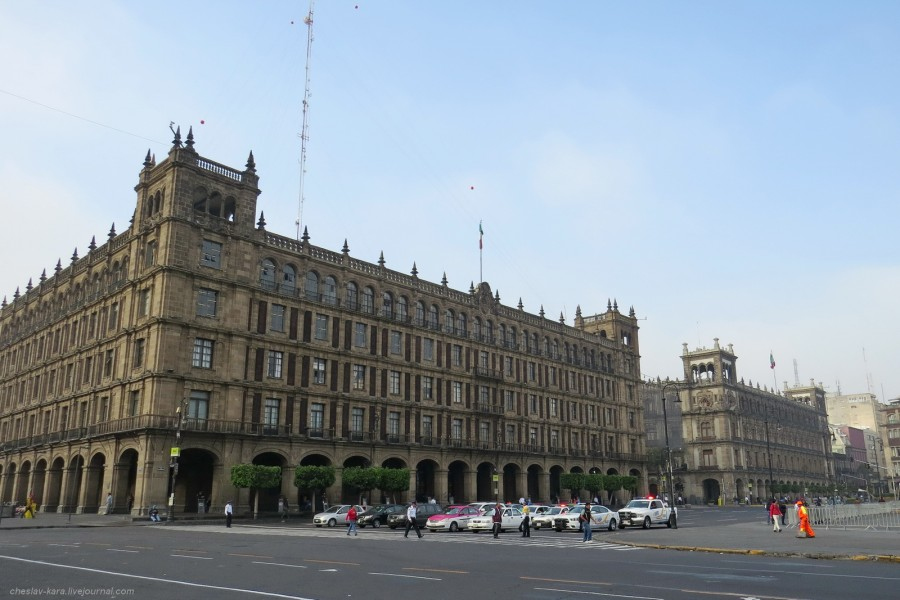 It seems to be the former city hall of Mexico City (cacti and an eagle are available): 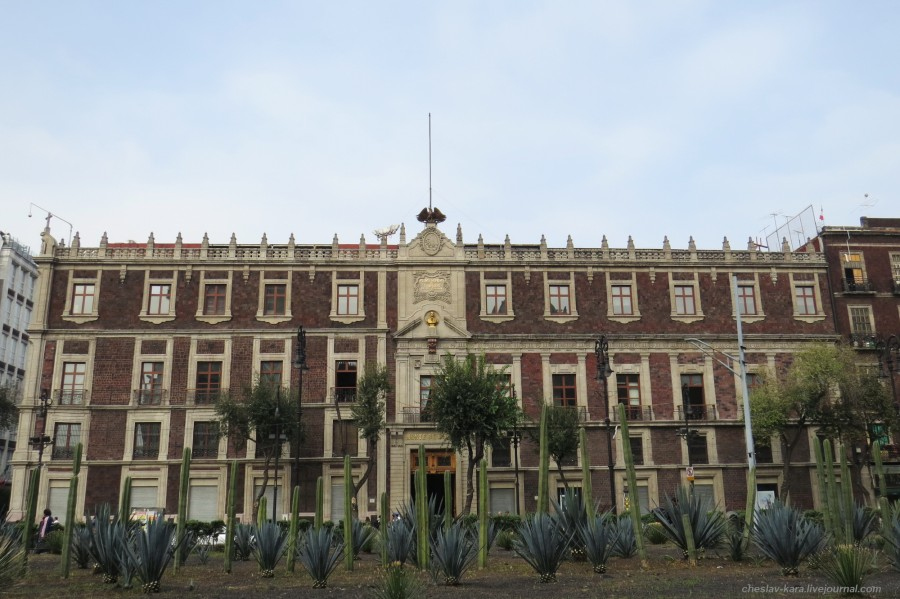 Along the pedestrian street () we go towards the park 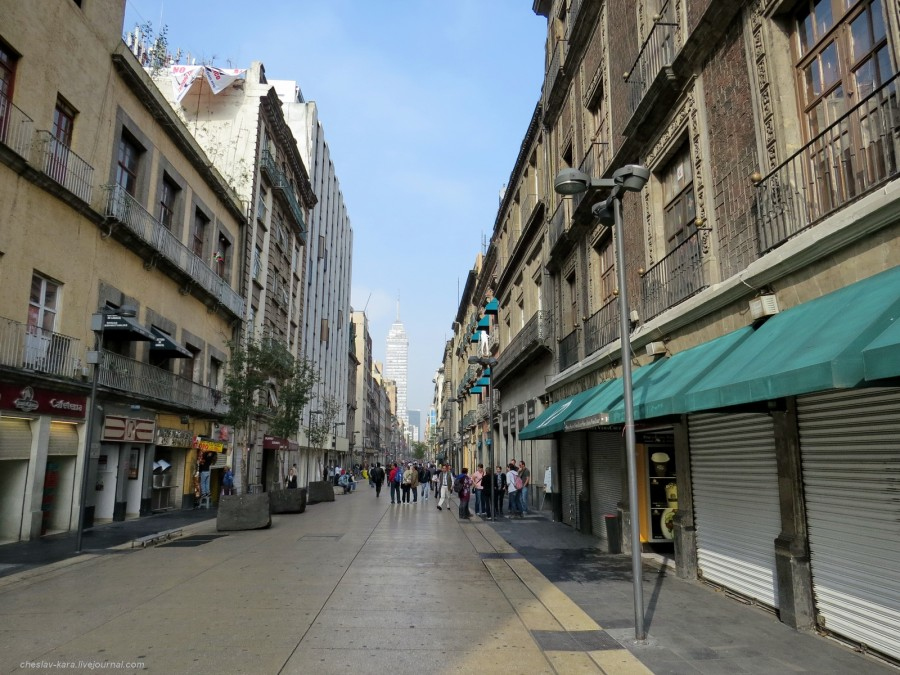 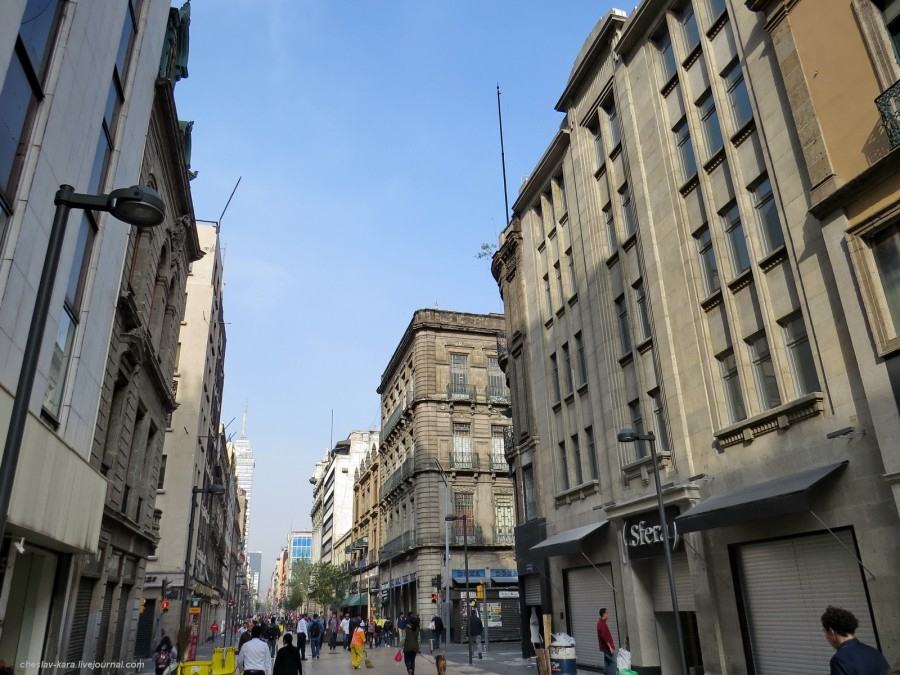 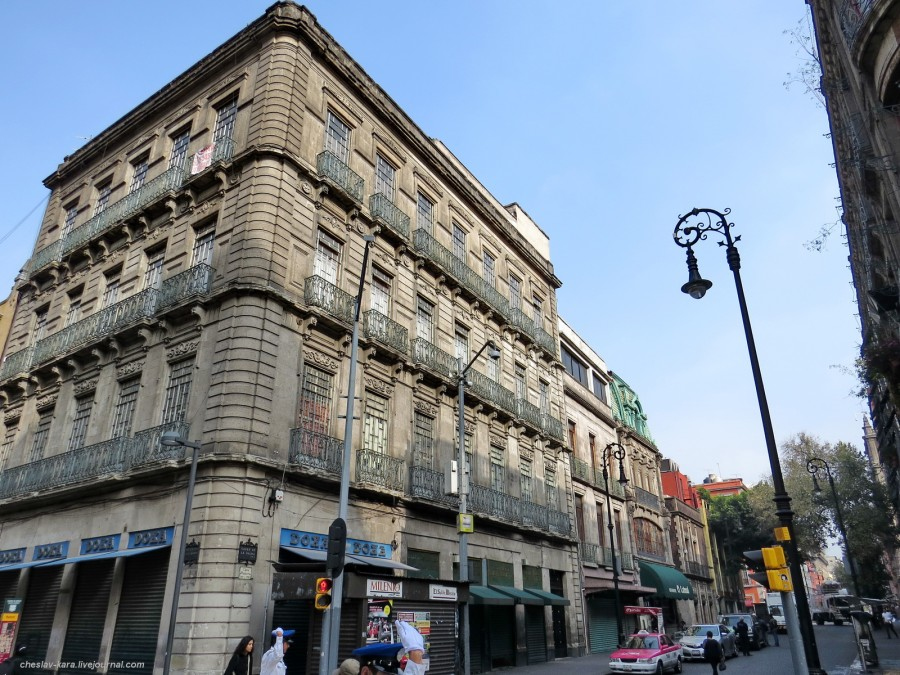 A few days ago, the Day of the Dead (Memorial Day of the Dead) was celebrated, so there are still a lot of decorations made of flowers, skulls, skeletons and other things on the streets: 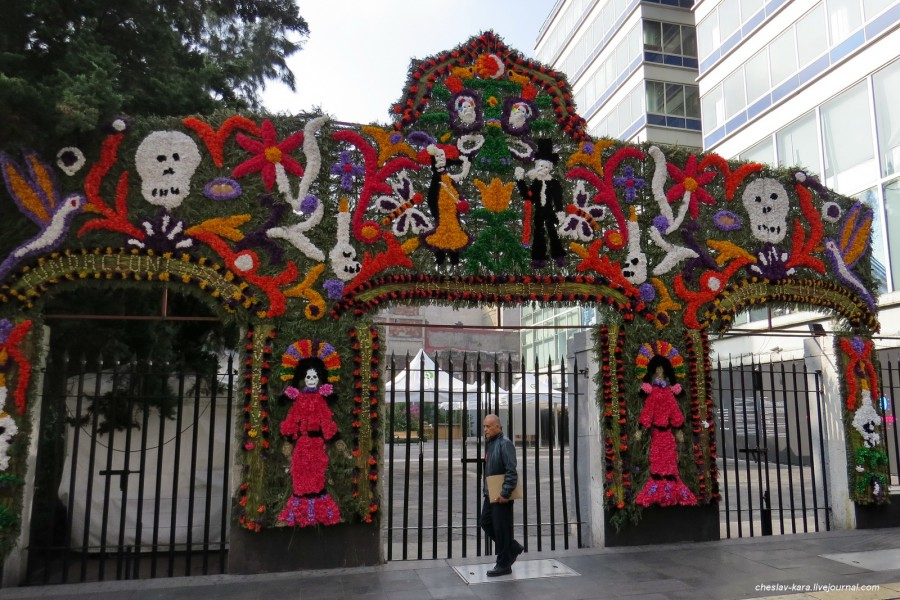 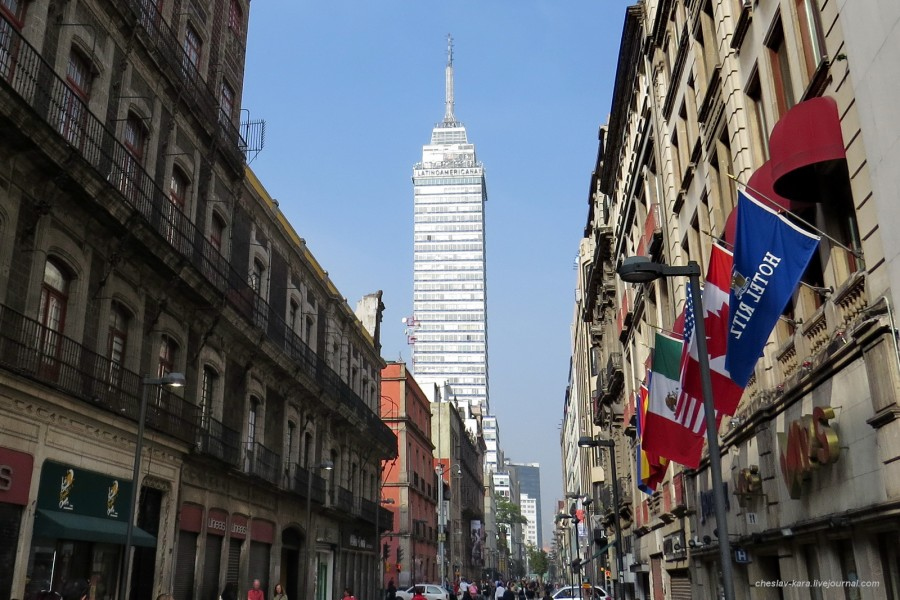 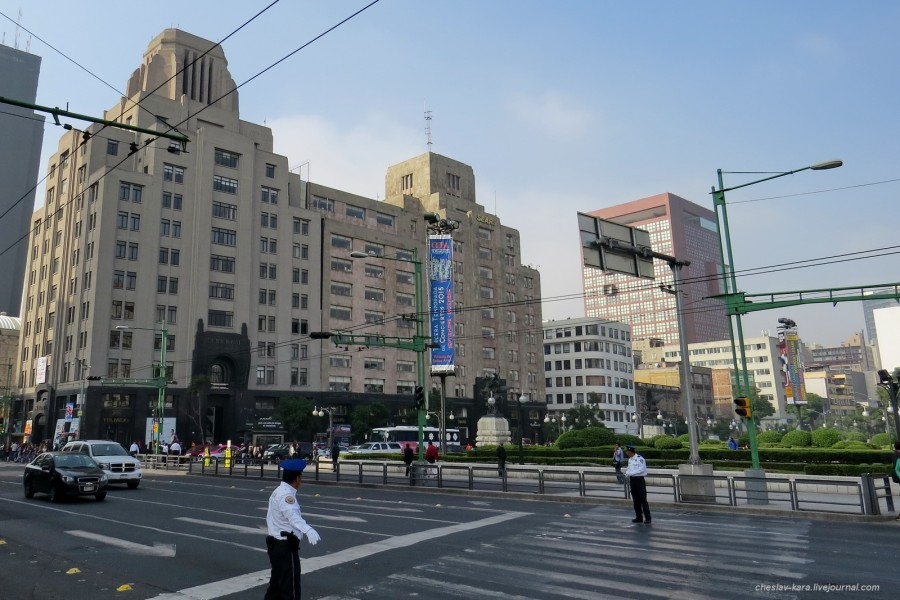 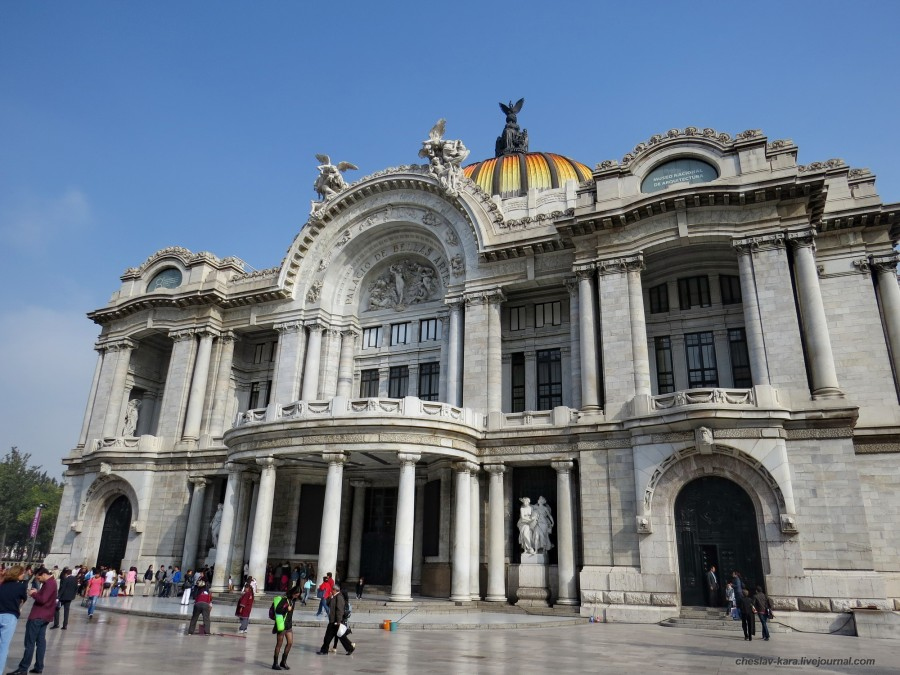 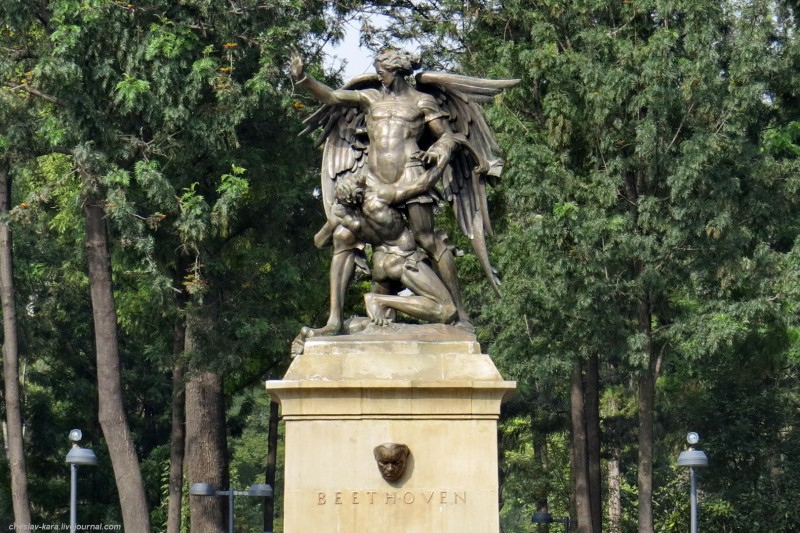 The Mexico City Metro is the largest in Latin America. In the center, some of the stations are decorated in the Art Deco style, just like in Paris: 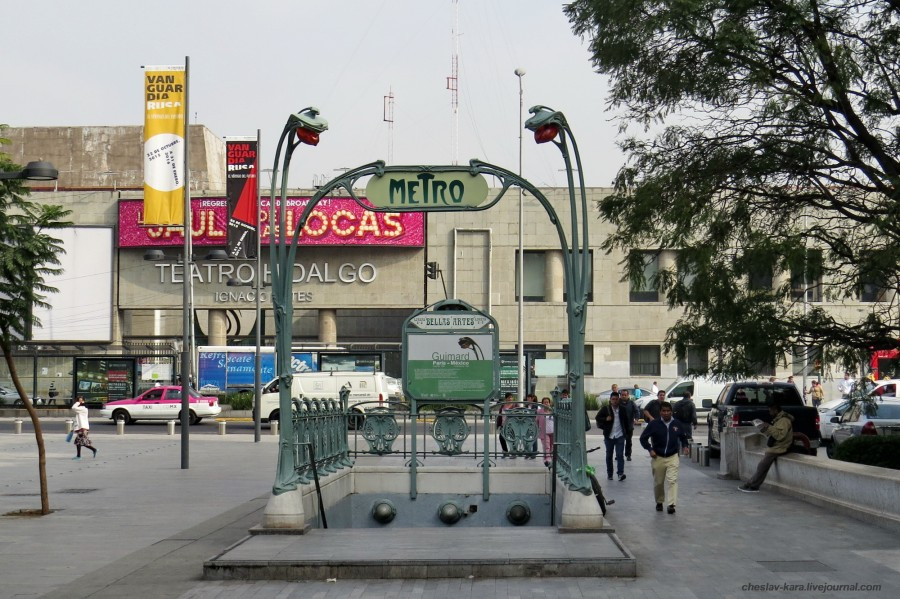 (Church of the Holy Veracruz) 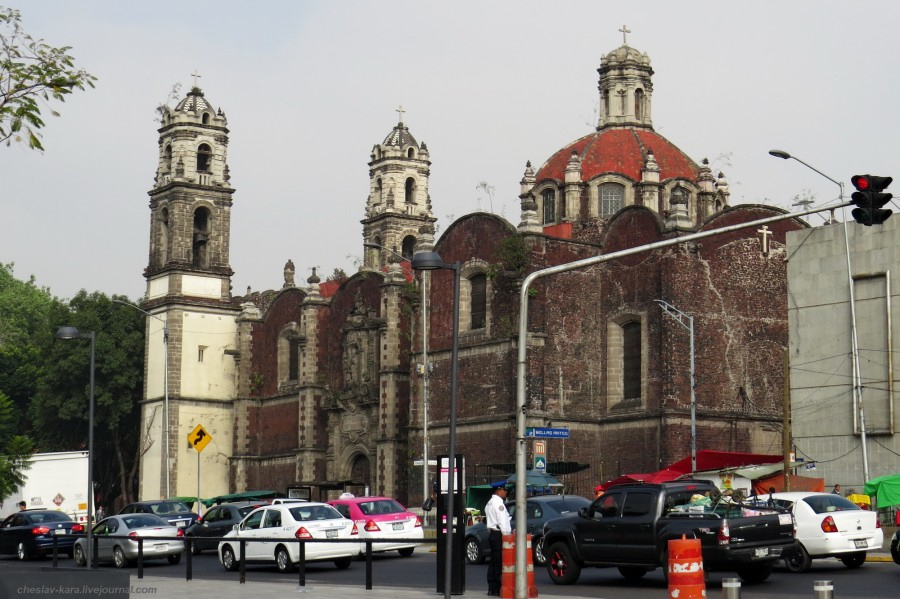 Then we drove by bus along (; referring to the reforms of President Benito Juarez in the 2nd half of the 19th century, as a result of which all aspects of the life of the Mexican state were transformed) - the main avenue of Mexico City. Along it, in the squares and on the sides on the sidewalks, there are many monuments to historical figures who played a role in the history of Mexico.
Unfortunately, almost all the photos taken "on the go" turned out to be unsuccessful.
Columbus: 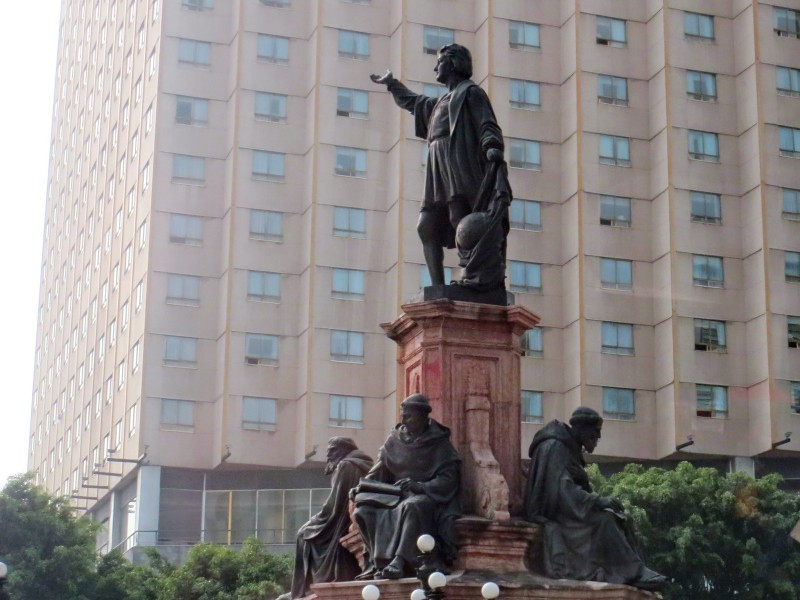 Hermenegildo Galeana, one of the heroes of the War of Independence: 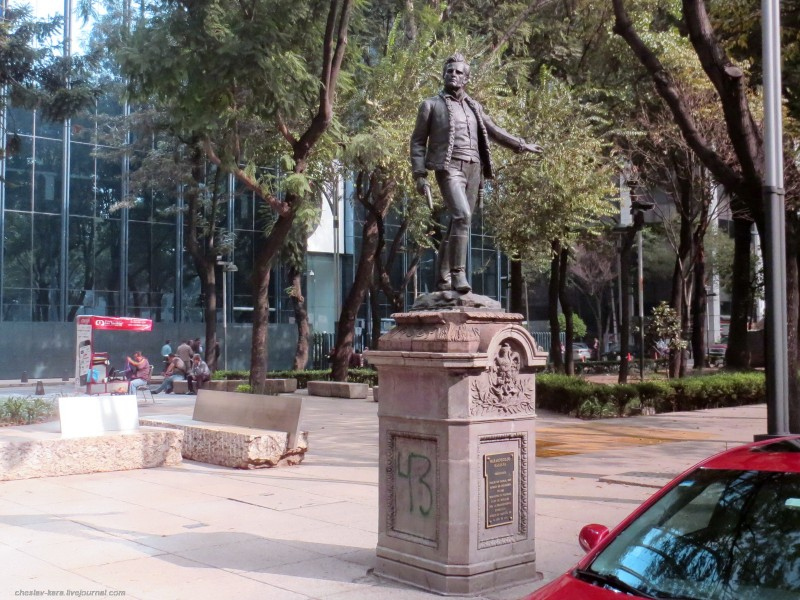 () - a monument in honor of the victory of Mexico over Spain in the war of independence (1810-21). Built in 1906-10. Many heroes of the War of Independence are buried at the base, incl. first Mexican presidents: 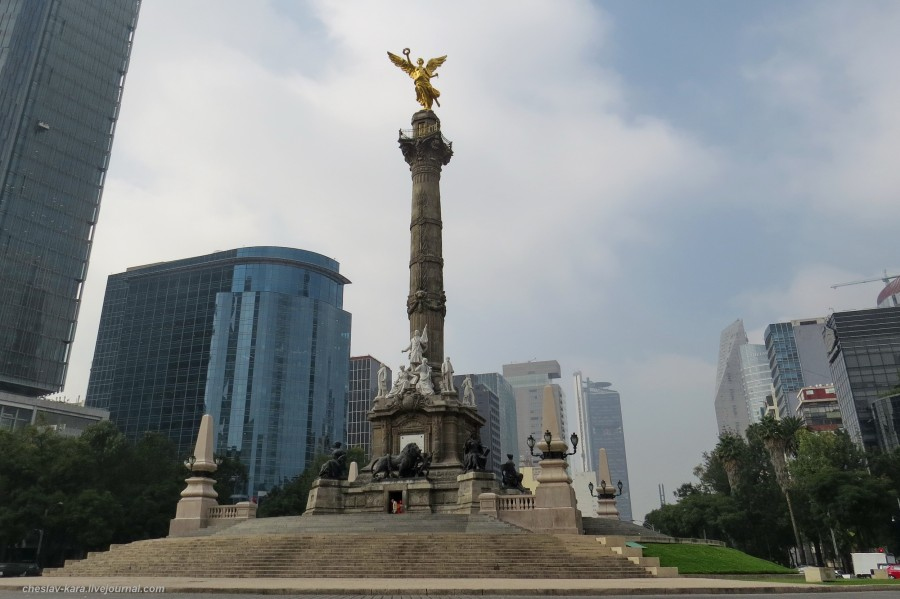 At the top is the goddess Nike: 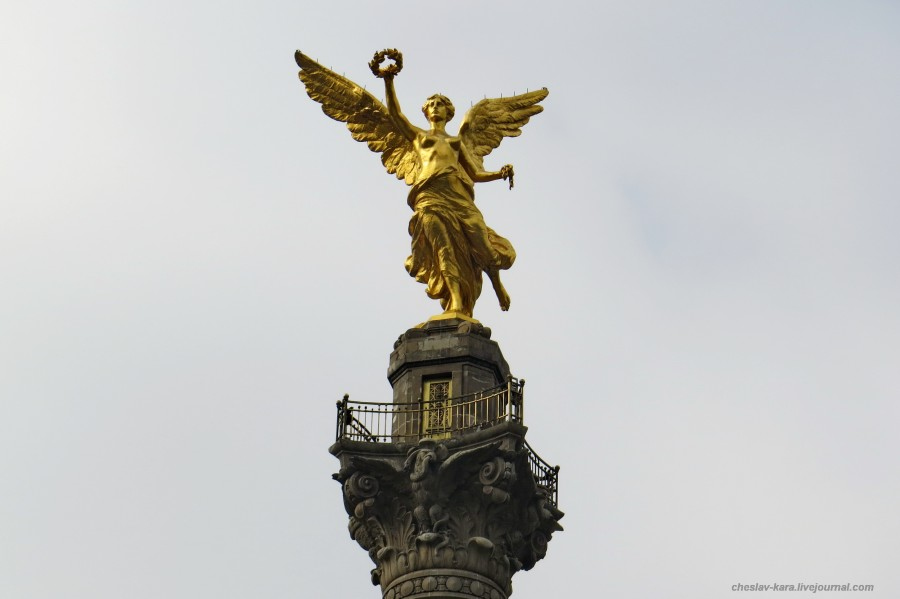