AdBlock detected. Site operation may be disrupted due to running AdBlock. Please disable it for this site.
Home Stories Indonesia

Tanah Lot temple in Bali, where the waves come to grips with the land

For many visitors to the island of Bali is a complete surprise that the dominant religion of this place (more than 90% of the population) is Hinduism. So what about India here reminds a lot. Here you will see and Shiva and Ganesha (the elephant-headed god), and many other familiar characters from childhood Hindu mythology. But, of course, a distance of the Indian Ocean between these cultures makes itself felt. So in Bali not only has its own unique religion, but also its unique and striking style of architecture. This is most clearly manifested in religious buildings. Probably one of the most famous temples not only throughout Indonesia, but all of Asia is Tanah Lot (Tanah Lot). 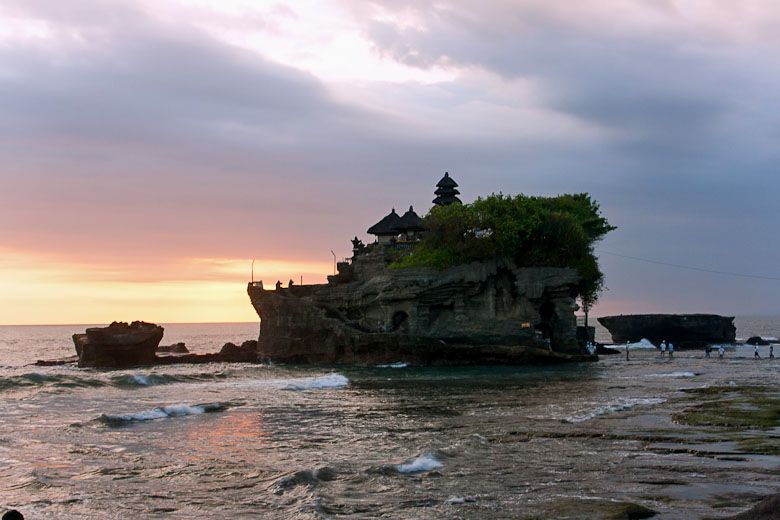 The name translates from the Balinese language as the "Land of the sea." This is a completely accurate description of Tanah Lot. After all, it is located on a peninsula that is such only at low tide. On a narrow isthmus, you can go to the sacred island of only a few hours a day. At other times, the ocean hides beneath its waters pass and the temple is separated from the ground, becoming a part of ocean space. As in most Hindu temples, Tanah Lot, there are restrictions on access to its neinduistami. But they are quite soft. So, for example, you can go to the lower tiers of the island. Not allowed unbelievers only at the top, in the sanctuary itself. 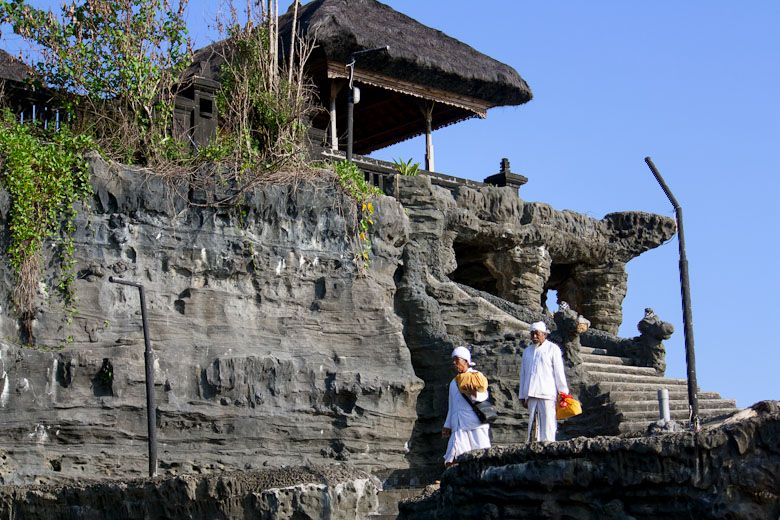 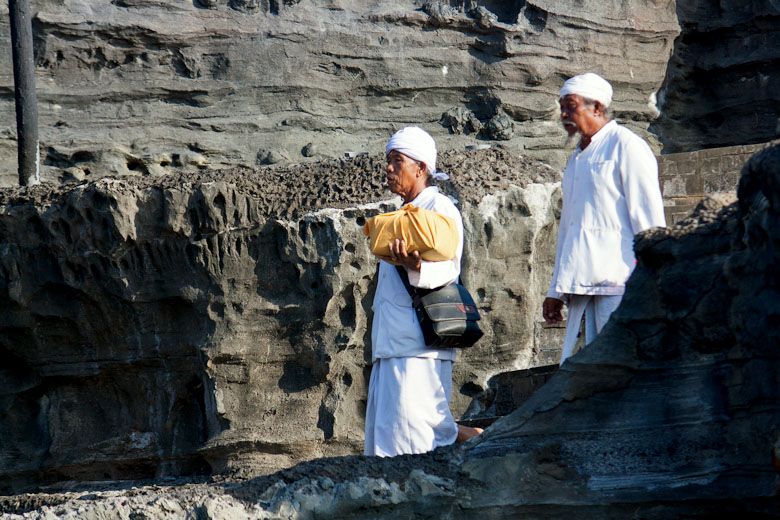 The temple is one of the oldest in Bali. It was built in the 15th century Brahmin Nirarthi, who arrived in Bali from Java. According to legend Nirarthi brought to this place light emanating from a spring in the rock. Spring beats this place on this day, and its waters are considered medicinal. And he is revered Hindu Brahmin of Bali so far. And he always bring offerings. The fact that this place can be honored to judge because the road to the temple passes through as many as two gates. In the first deities are looking at you speculatively. Appreciate you. A swastikas reminiscent of thousands of years of history of this faith. When you pass "face control", you will be allowed to the second gate. They are located on the shore. And right behind them, you will discover the same kind that was once open Brahmin Nirarthi. 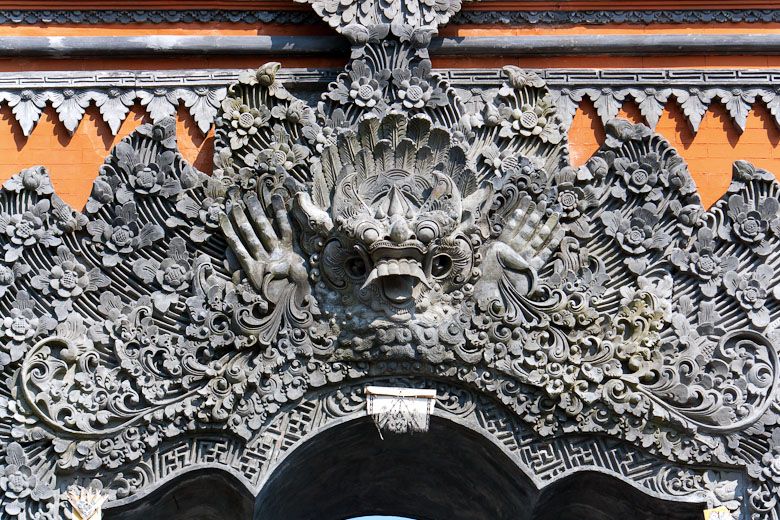 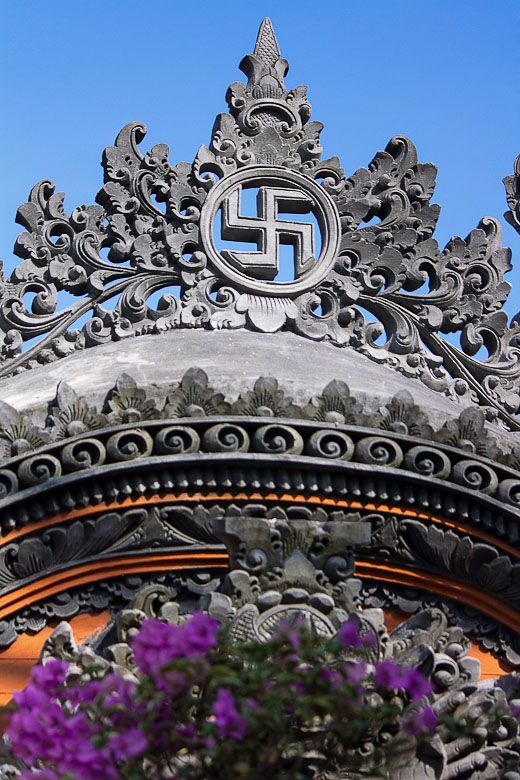 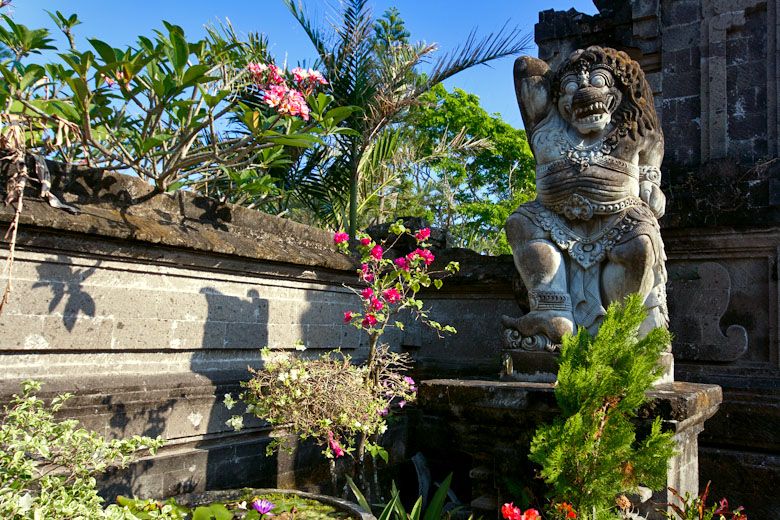 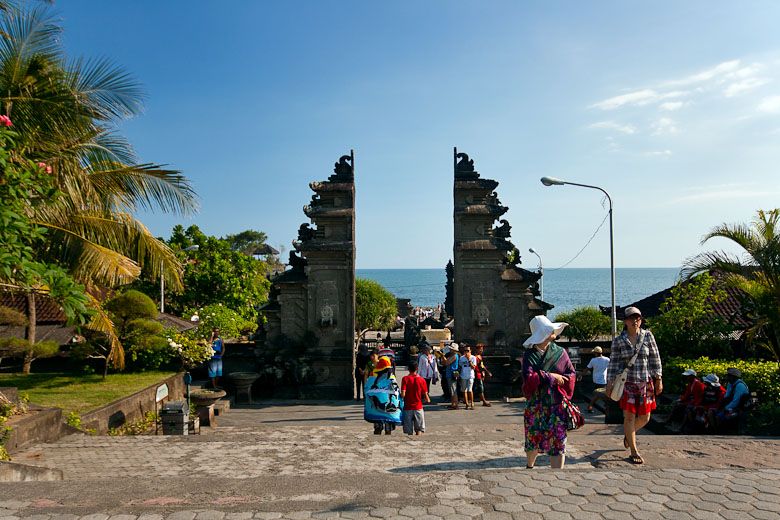 In fact, not only Tanah Lot temple on water in Bali (though very beautiful). There is a whole chain of sanctuaries along the coast. A total of seven so-called sea temples in Bali. With each of them you can see the two adjacent. So they ringed the island invisible barrier. And serve one purpose - to protect the inhabitants of the island and the sea gods praise. 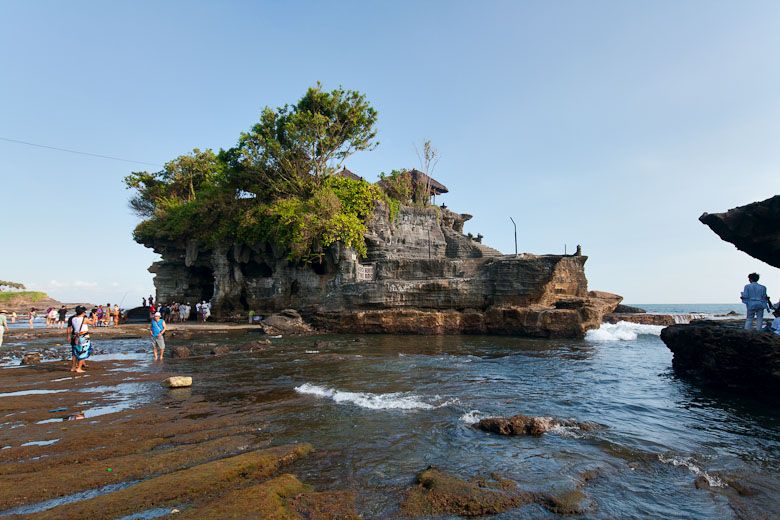 But even if you are not a fan of studying architectural attractions, you will still have to come here. Because these awesome waves as there are few where you can see. 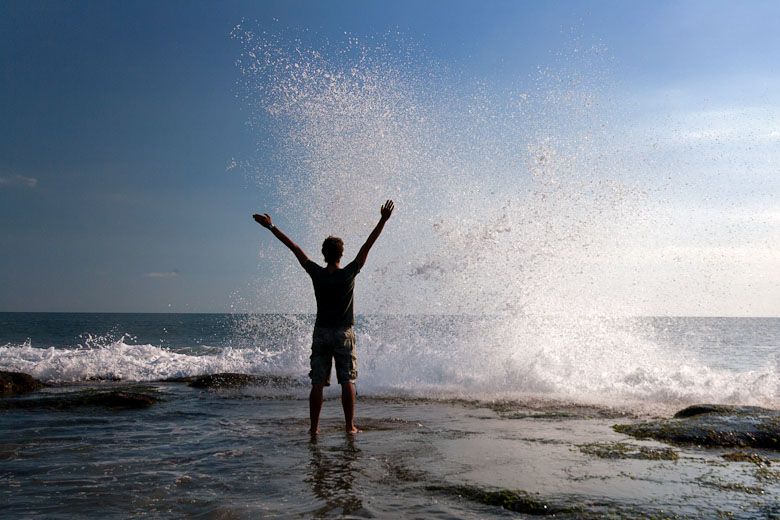 Rocky coast just created to the ocean waves and raging rampage, trying to break the stones into tiny pieces. 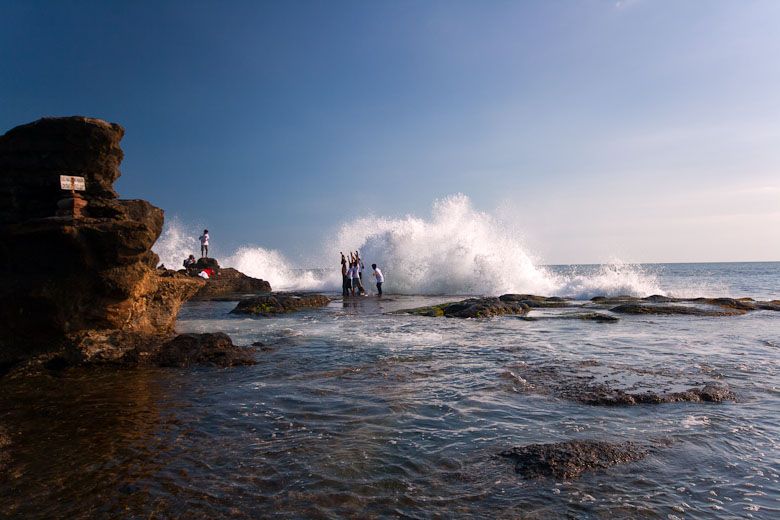 The bravest are substituted by three-meter bursts, which strive to knock down. State "mokrosti" comes instantly, but the fun continues. That is probably resent sea demons! 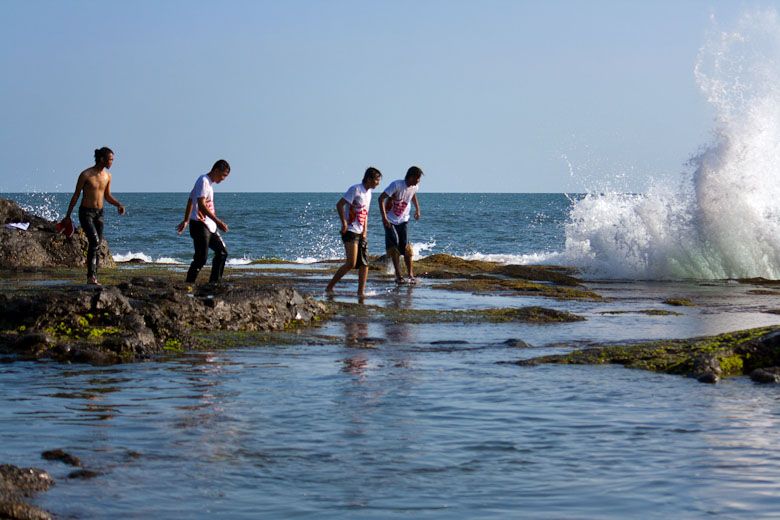 Waves are constantly trying to hack his new path. And here and there is heard a hissing sound. It cut through the air skovoz cavity pushes water. Small geysers fyrchat constantly. 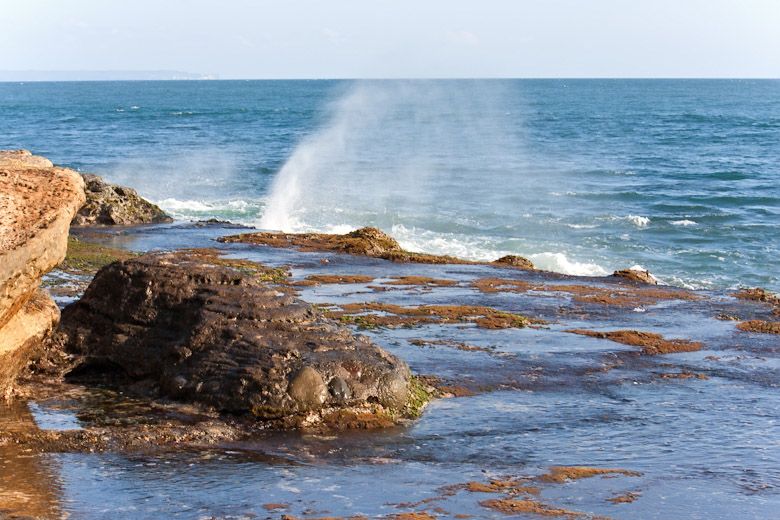 In general, the tide can be quite high. This can be seen along the road ends abruptly on a rock platform. Now there's a lot of people, but soon it will be the seabed. 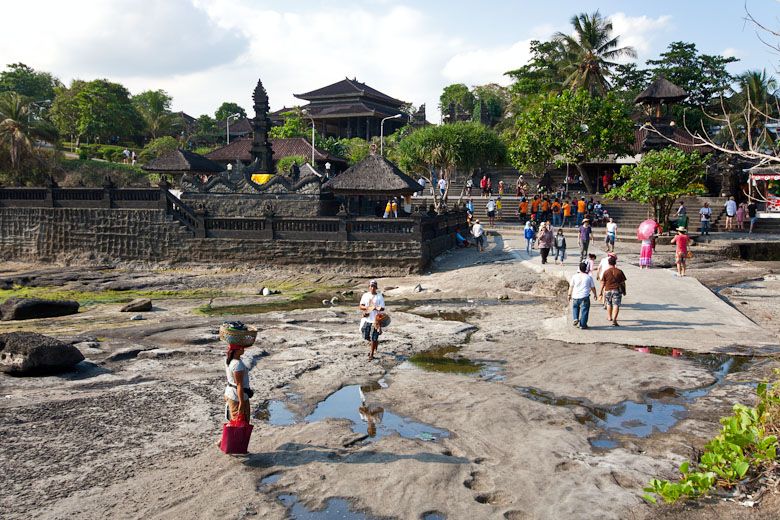 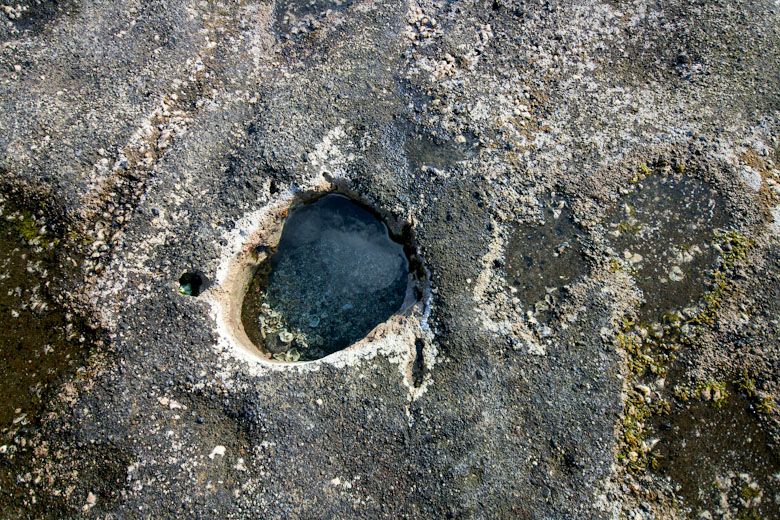 You can watch live as the ocean itself otvoёvyvaet back space. By the way, according to legend, the temple is guarded by poisonous sea snakes. In fact, they are against evil spirits and intruders. But who knows who they consider uninvited. 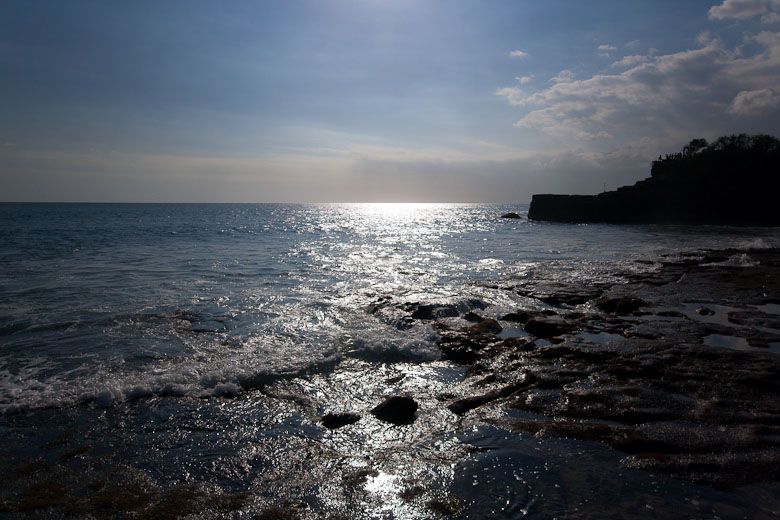 Between the temple and the short cut through the rock, there is the wave passes. And watch as a roaring wave breaks on it any more abruptly blockbuster. Rolled a huge mass, stroke and like water with a flat dam rushes forward. Unwittingly takes a step back from this violent stream. Do not envy the one who will be there! 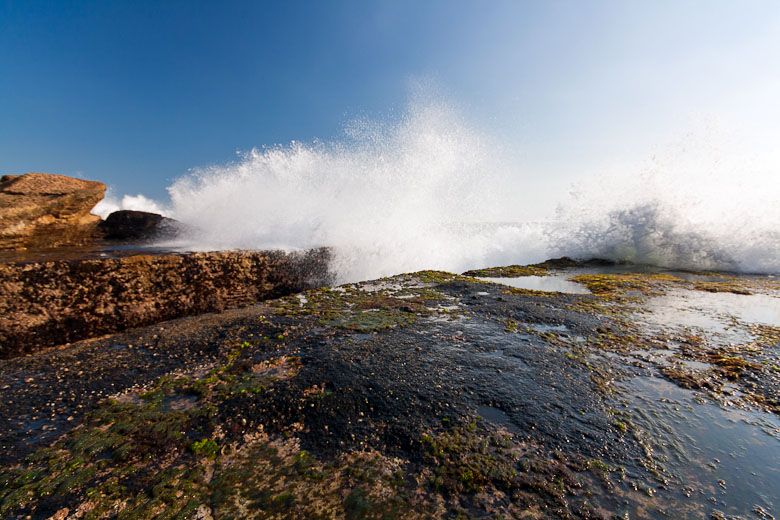 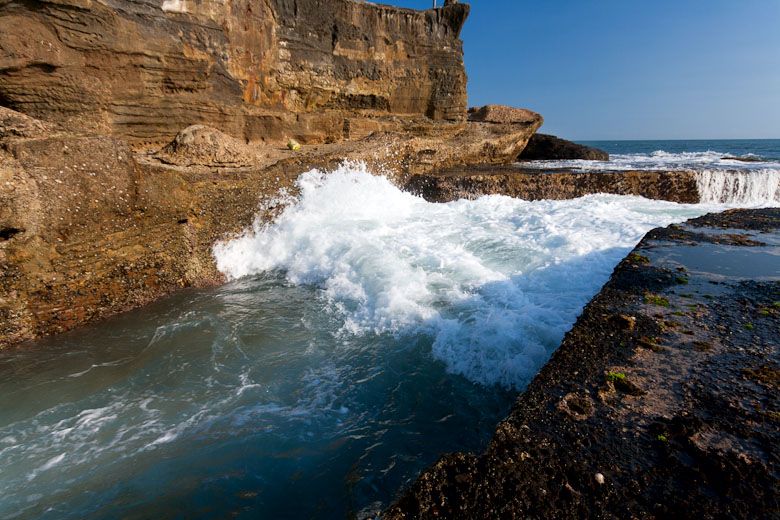 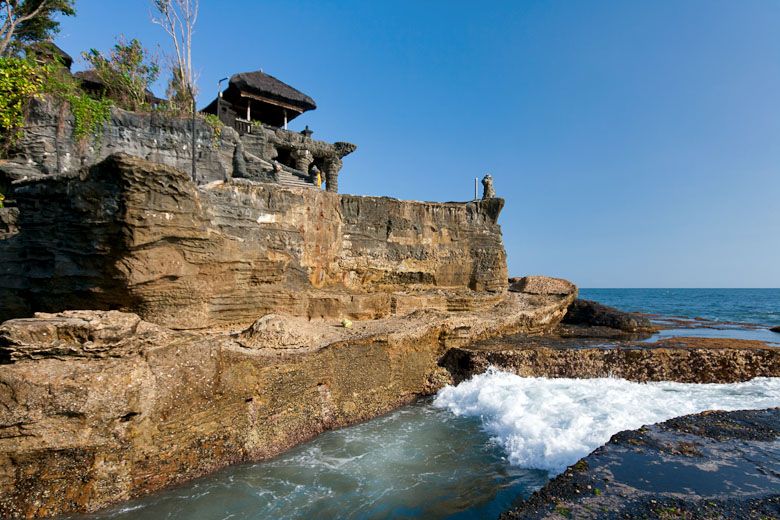 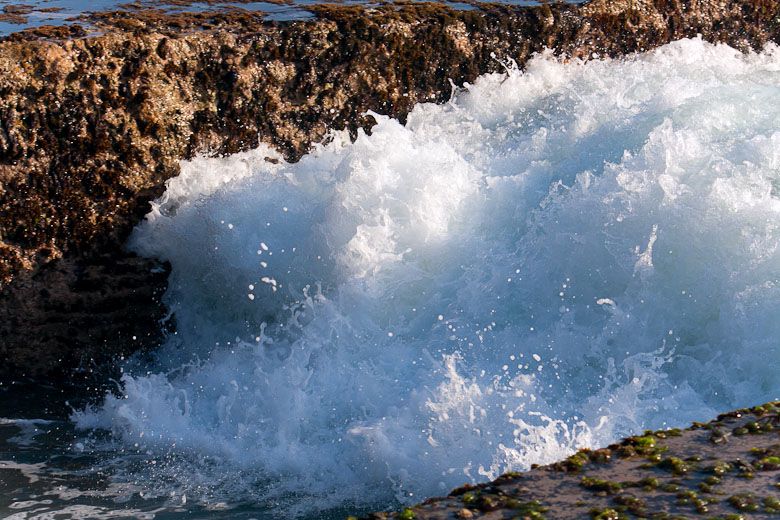 I do not understand how to manage to keep the crabs on the edges. Clinging claws for minor protrusions they hold there more confident people! 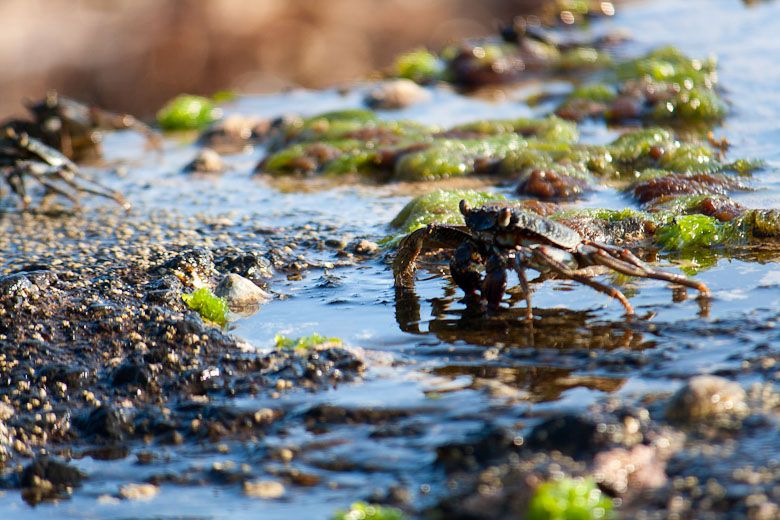 Water pressure weakens and streams begin to flow back into the ocean. Every time it seems that they are endless. And it's some kind of dream. On a flat surface so the water drains. I remember a time when people thought the Earth was flat, and with distant ocean rushed down the borders. But gradually the land throws off the blanket of the sea. 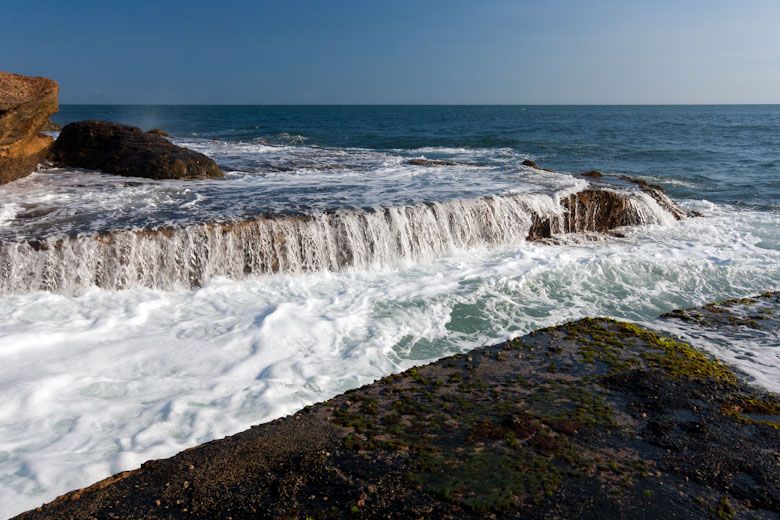 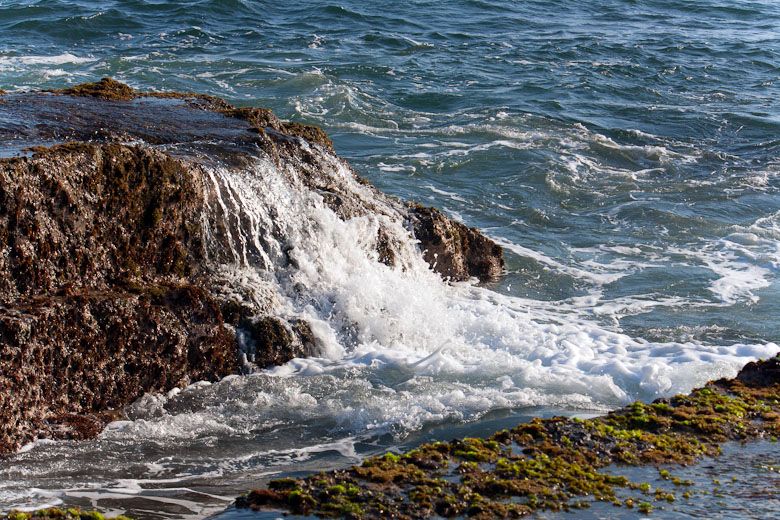 No wonder that in this place a lot of artists who are trying to capture the grandeur of the moment. Stunning picture battle between the sea and the land. 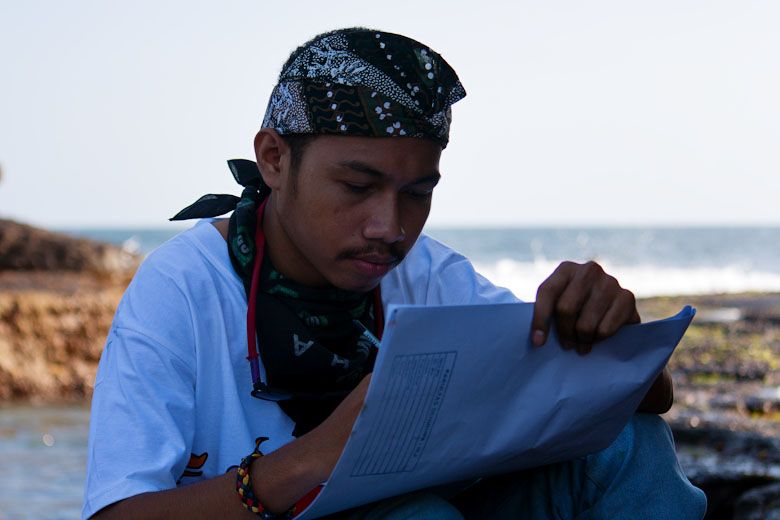 The surrounding landscape is reminiscent of something cosmic. Or maybe the magic and the unknown. You seem to spy on a secret underwater kingdom. These underwater meadows open to us, there is land. 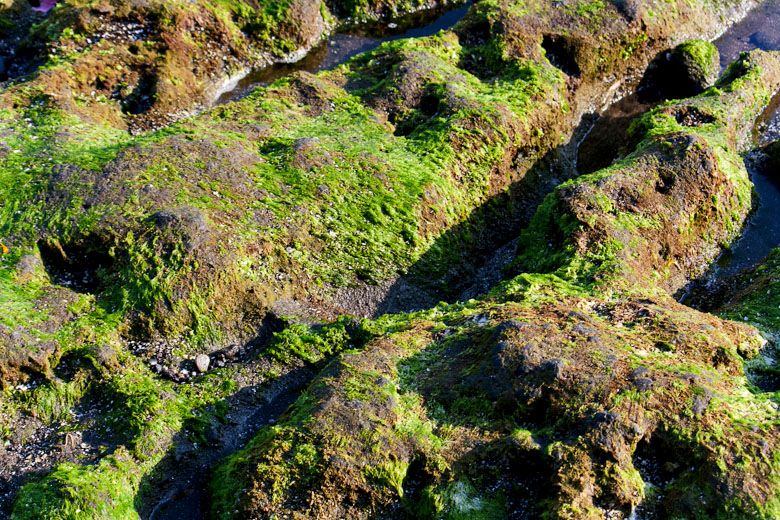 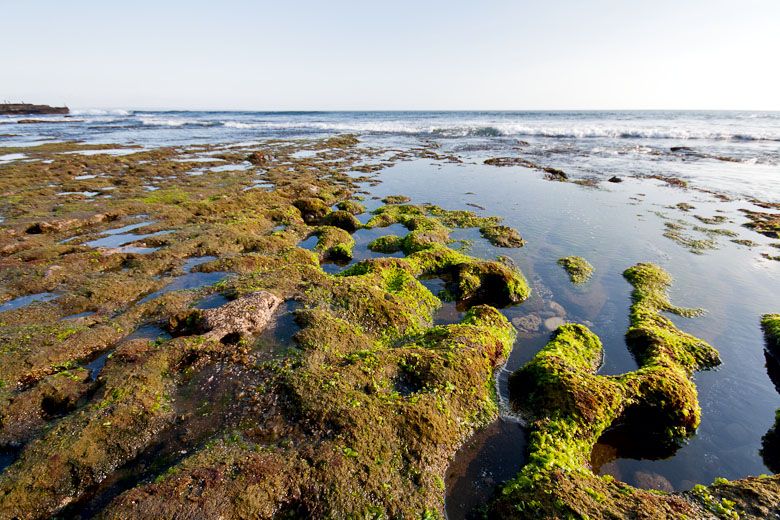 Under the warm Balinese sun, walking on soft moss, bathing in streams of fresh air, I want only kayfovat 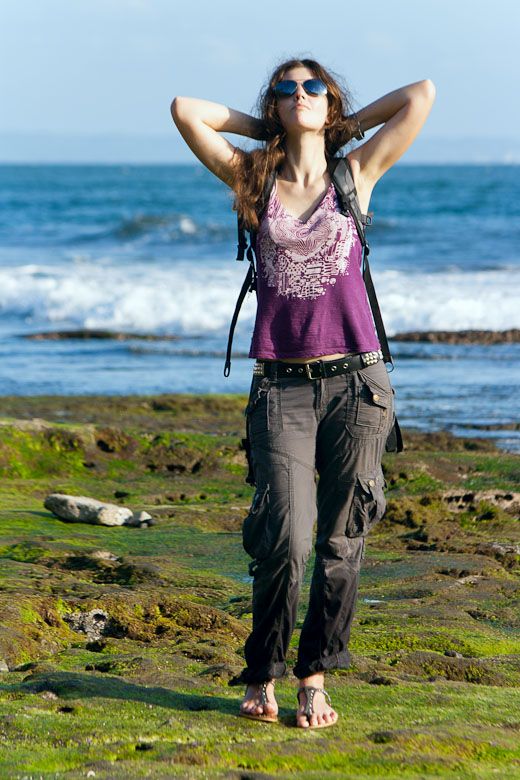 There is one thing for which come into this place of tourists from around the world. Stunning sunsets, against which Tanah Lot is beginning to play non-transferable dyes. The whole area starts to sparkle in different colors. This is a must see! 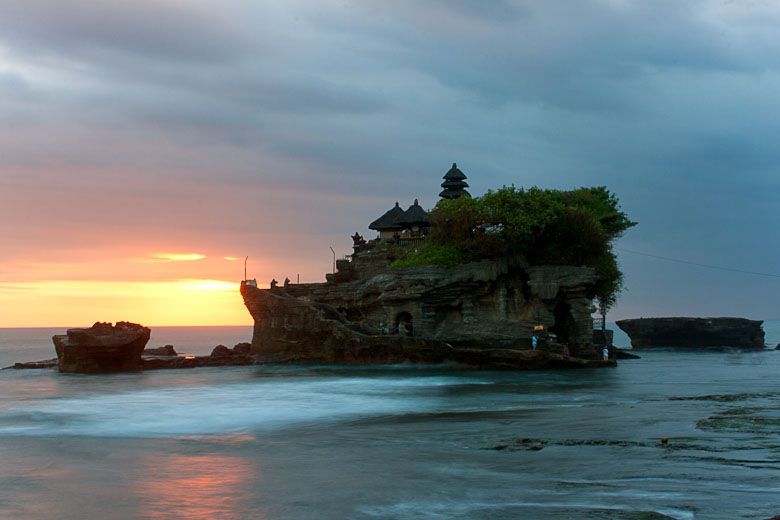