AdBlock detected. Site operation may be disrupted due to running AdBlock. Please disable it for this site.
Home Stories Indonesia

How to grow rice in Bali

Friends, finally, for all of this for a long time, I decided to disassemble archive photos and found a great many pictures on the subject - rice and rice fields. I decided to redo the previous post and supplement it with interesting facts and photos. Photos for this post were taken at different times, to cover wider periods of growth of the culture. Sorry for the poisonous HDR (sometimes wakes mania all paint) Rice is one of the oldest food crops in the world. In Bali, it is not just a lot, almost all suitable for this crop land planted with rice. 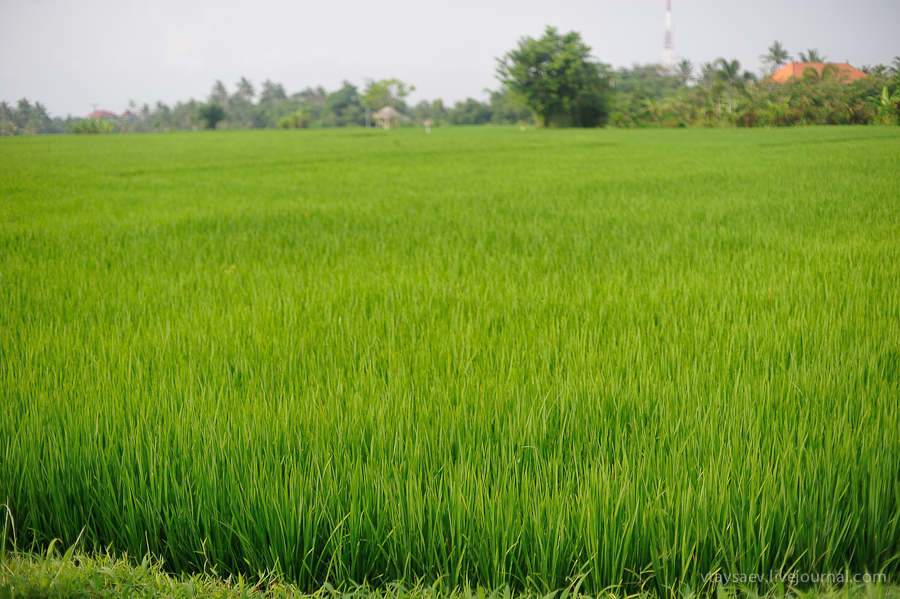 Most of the water goes to irrigate fields and terraces. Because of the dissected relief of the island, the rice fields are mainly distributed in the south and middle of the island. 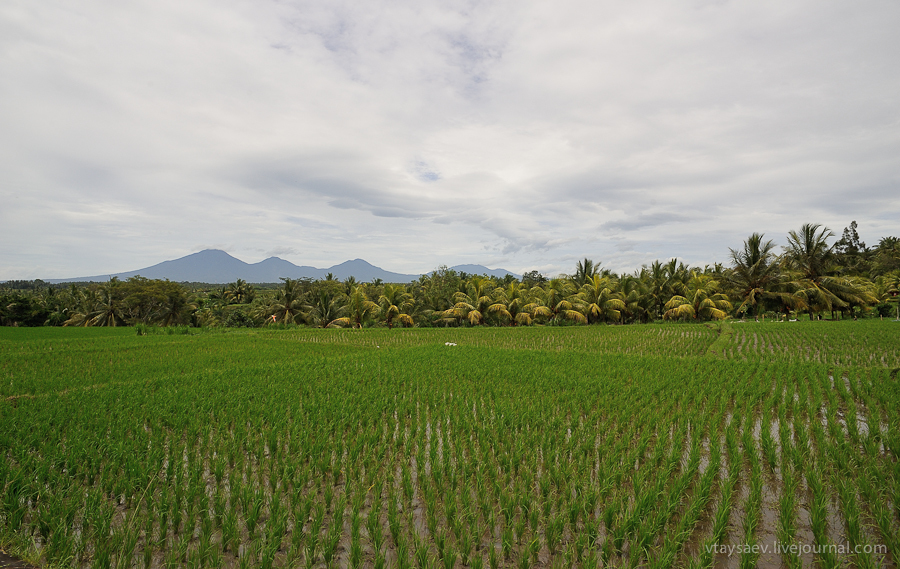 In mountain areas, rice is grown on terraces that are built on mountain slopes and fenced off special shafts for water retention. So, very popular among tourists enjoy the terrace Tegallalanga. 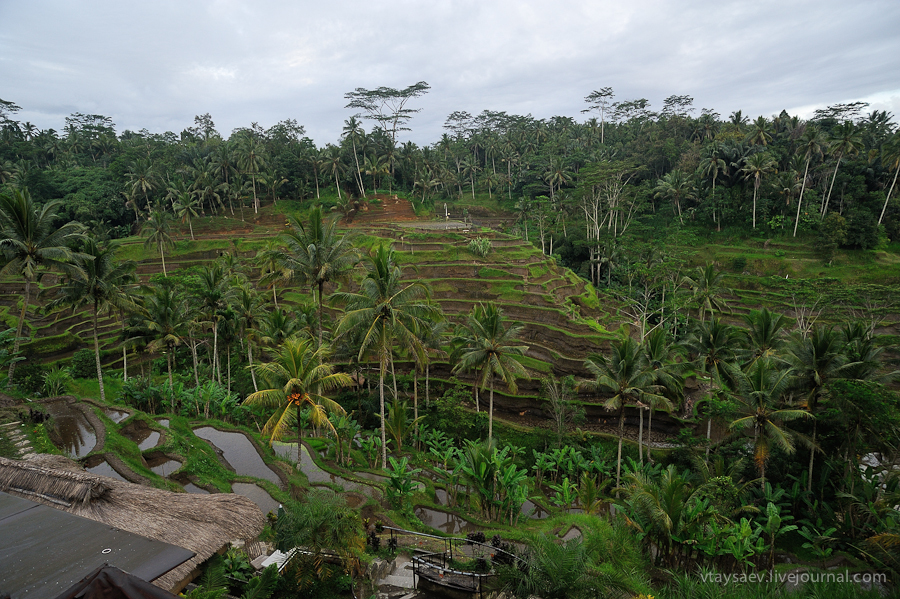 On the plains heavy paddy fields usually aligned to ensure uniform irrigation and good drainage, and divide them into sections of the shafts, after which there is pumped water system channels. 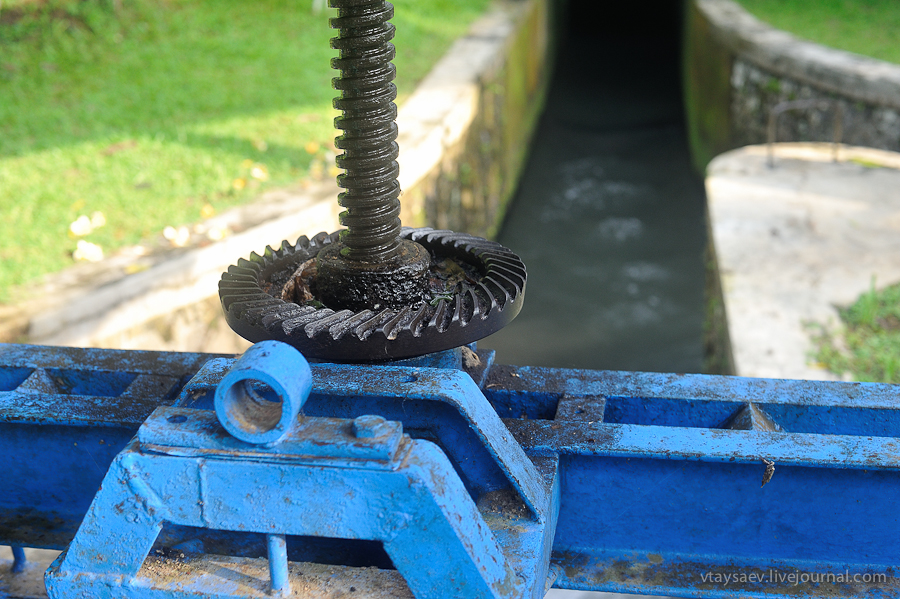 For the control of water, the following public institution - "Subak".  (Roughly speaking, Subak - a society of peasants living in the same "irrigation district." He may be one to several villages, and perhaps so that in one village there are several Subak - it all depends on the irrigation scheme in a given place ( Subak belong to all those who take the water to their fields from any one place - whether it be a source channel or river). They have dogovorivatsya each other and coordinate their efforts - or their families die of hunger. 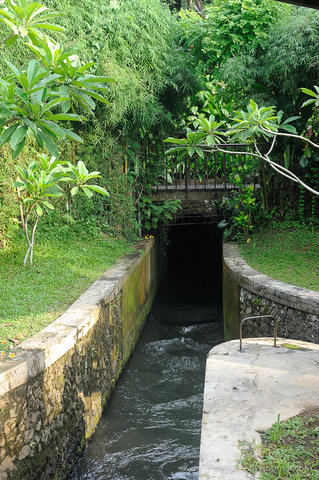 Sometimes you can see dozens of levels filled with water. 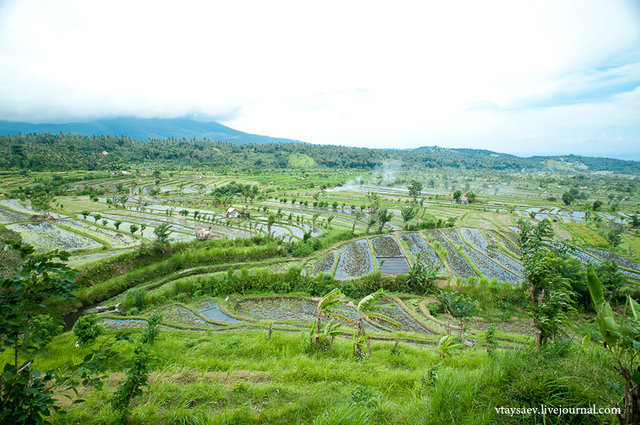 Because of the soft and pronounced seasonal climate, vegetation period of ripening rice is almost not expressed. Per year were 3-4 harvest.

Before planting rice grains germinated in special beds, and after 1-2 months of transplant in bunches of 3-4 germ in the soil of heavy field covered with water. 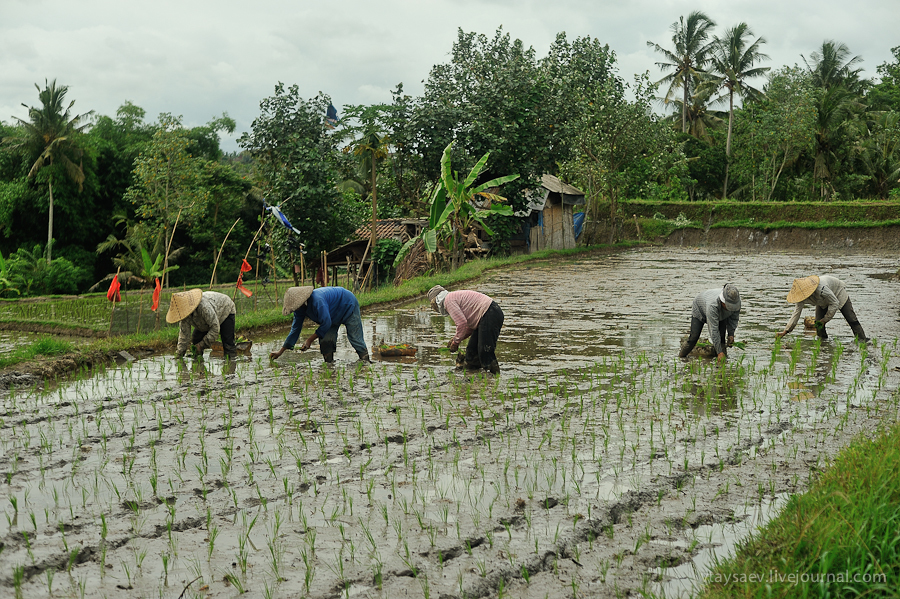 Extends the entire growing period in a humid environment, simply seeded rice and water is removed from the water. 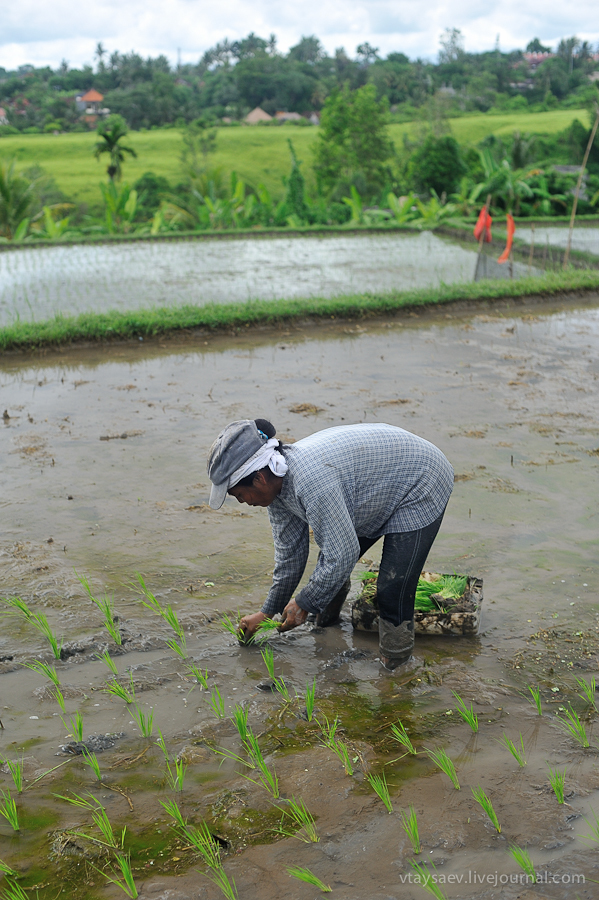 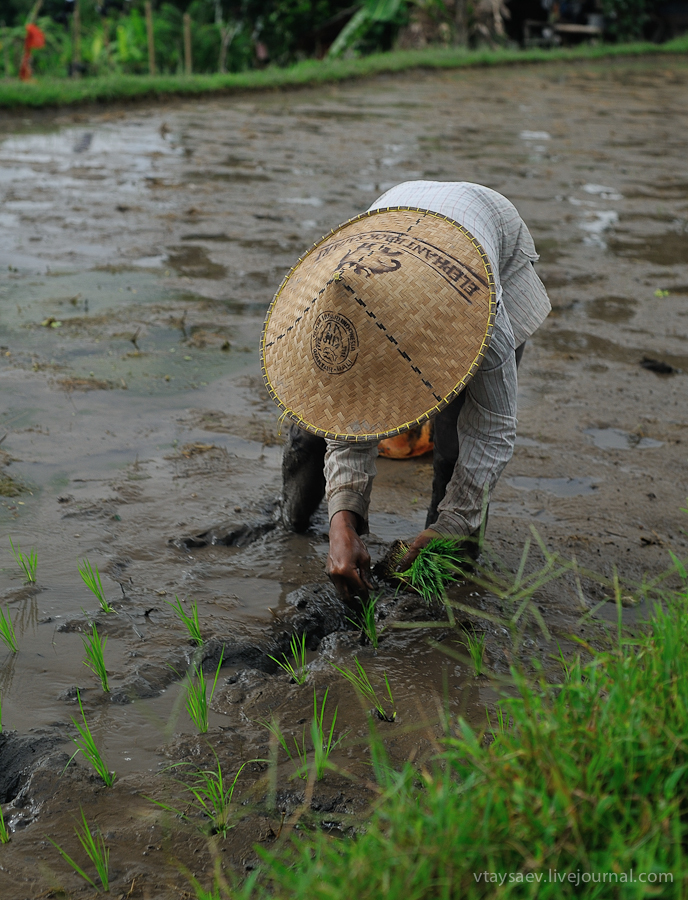 Salaries of employees, an average of about $ 50 a month. 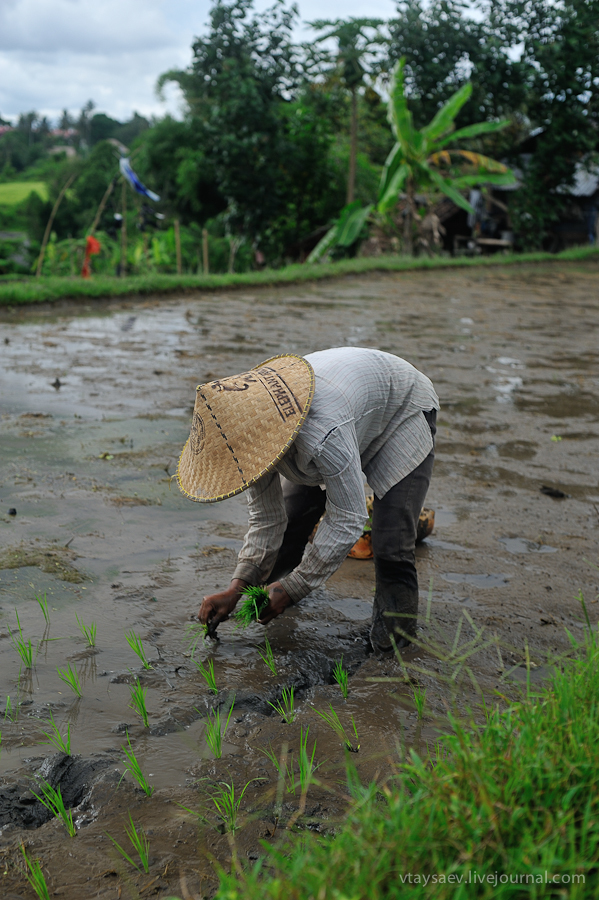 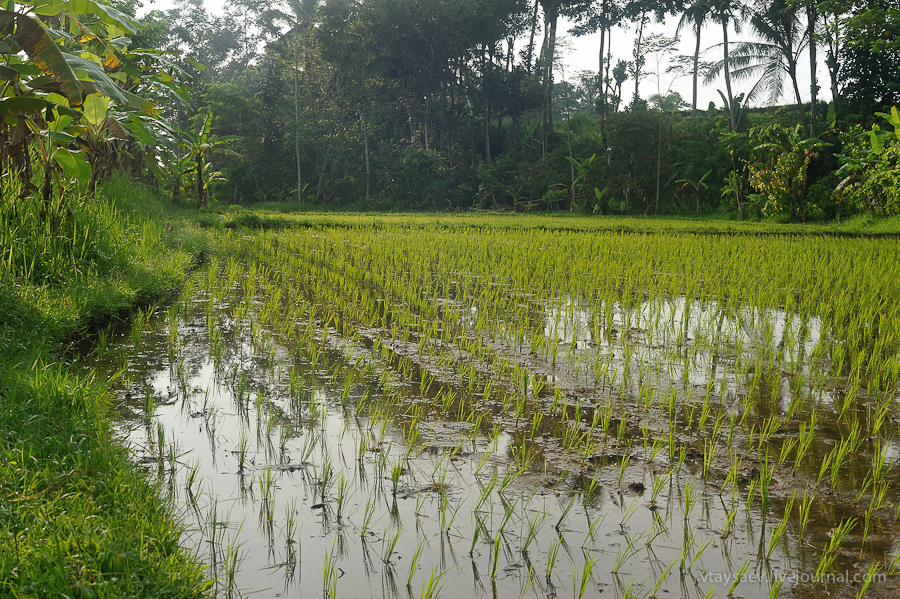 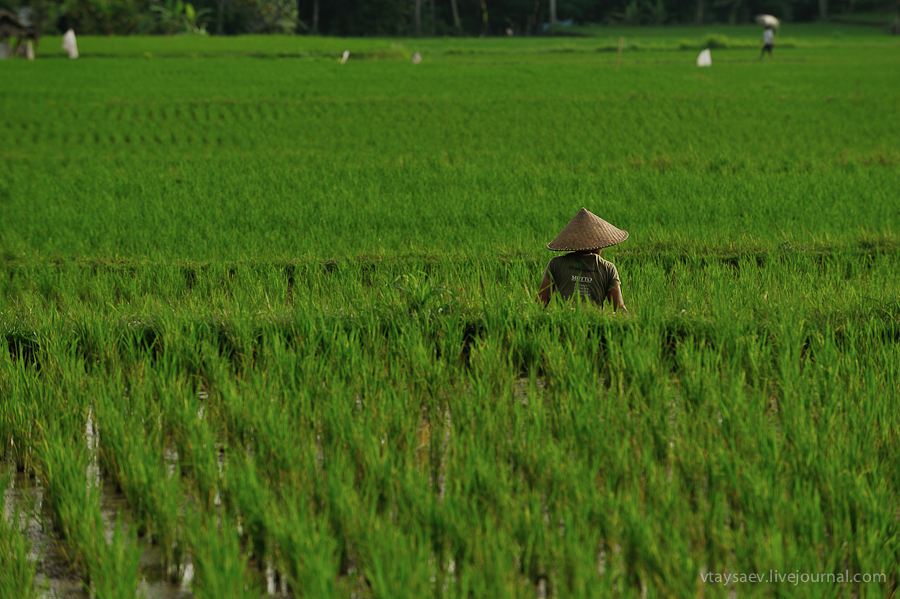 In the photo - is ripe fig, photo taken in the vicinity of Tabanan. 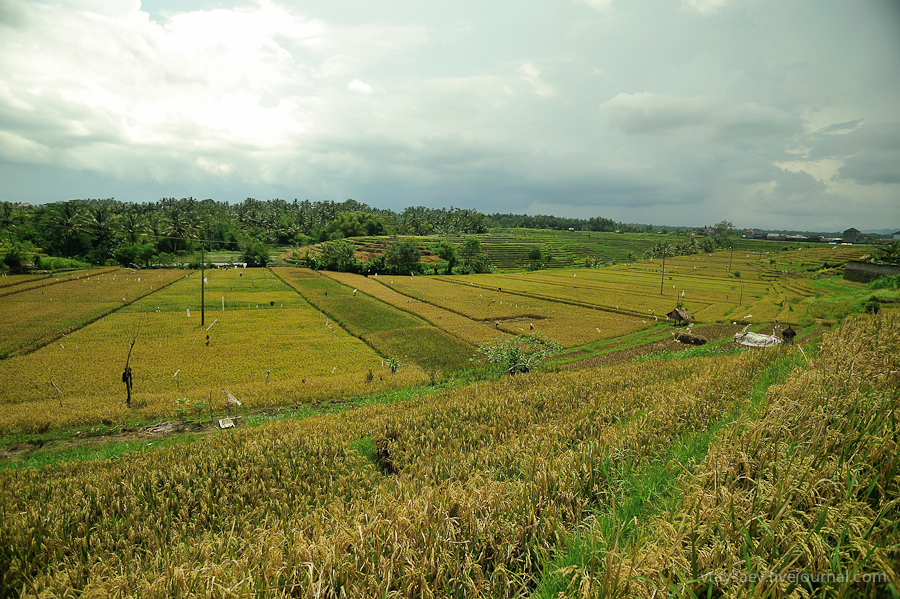 Figure matured and it's time to clean! I note that in Bali is very narrow roads and farm equipment is almost never used. Fig removed and inoculated almost always manually. 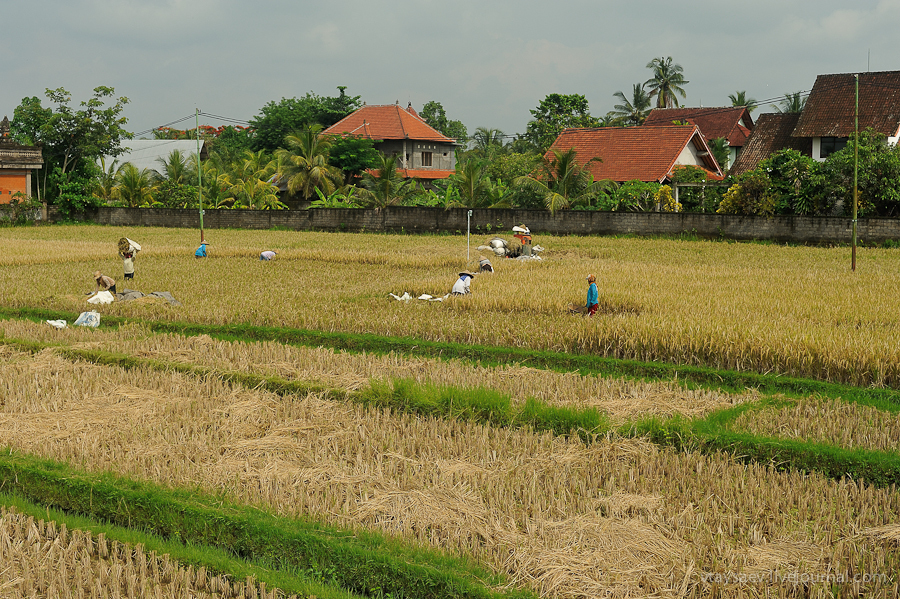 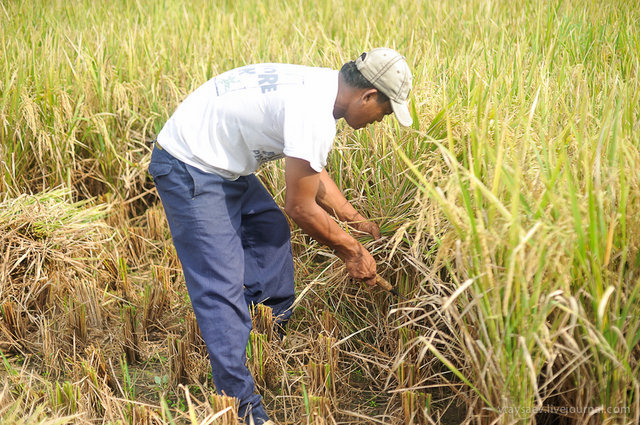 This process is called "thrashing", cut shoots of mature rice beaten on a wooden board. 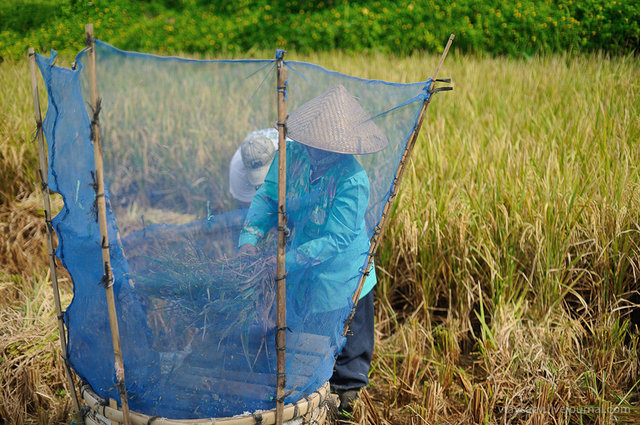 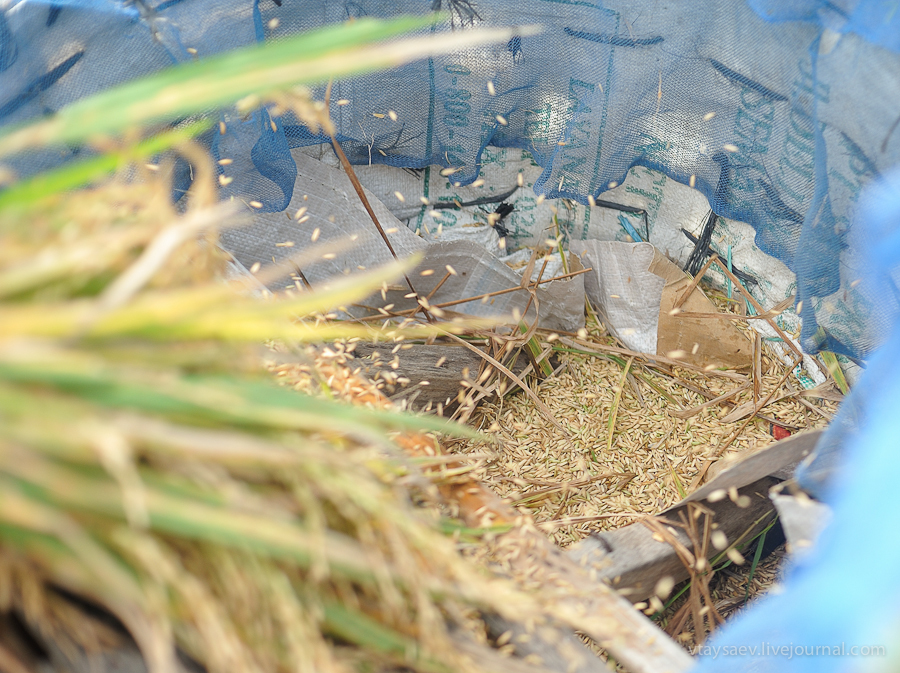 Grains fall into the basket and then dried in the sun. 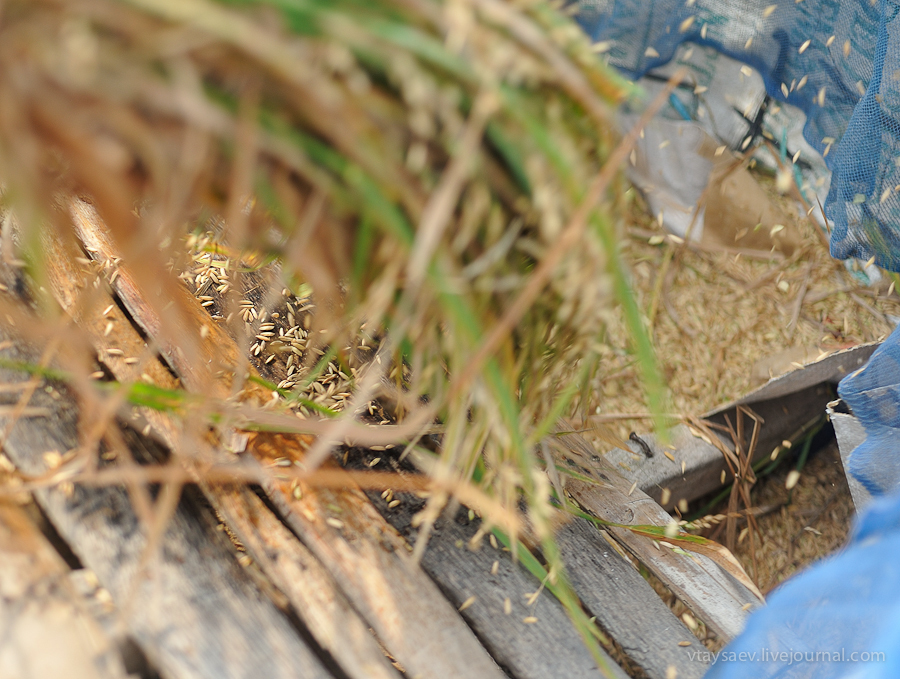 In the first treatment step was removed by rice husks, which protect corn from damage. Unharvested rice husks - red rice. It consists of whole grains of rice, it is nutritious bran shell, which gives it a distinctive brownish tinge and nutty flavor. Red rice is cooked much longer white, but it does not fall apart. When the rice is harvested, the field is left a little "rest". It is filled with water or .... 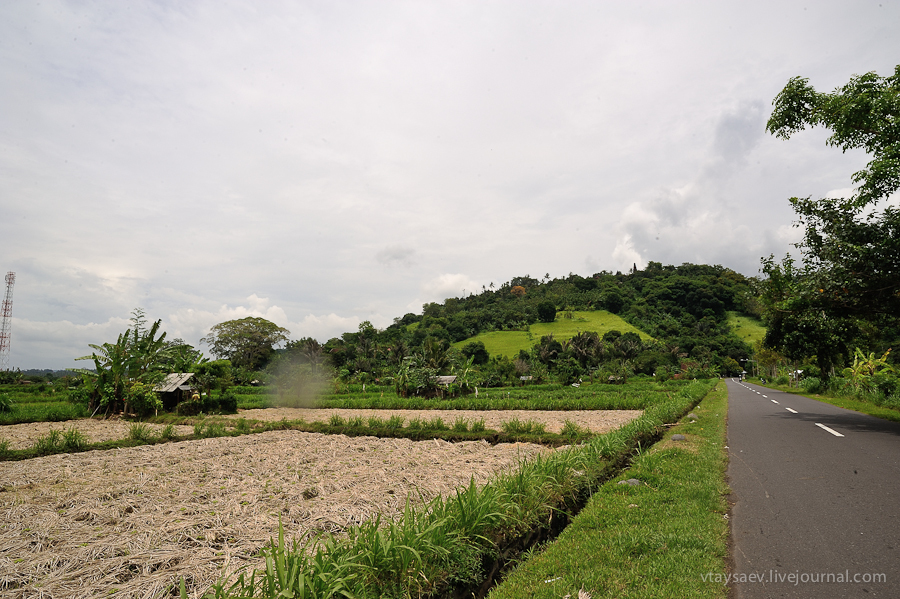 Attention, brought on mopeds whole horde of ducks that eat parasites and insects in the fields. Duck - it is a feast for the whole world. If you live in the middle of rice fields, with the coming of darkness into the light flying a huge number of bugs. To be frank, it's not very nice. 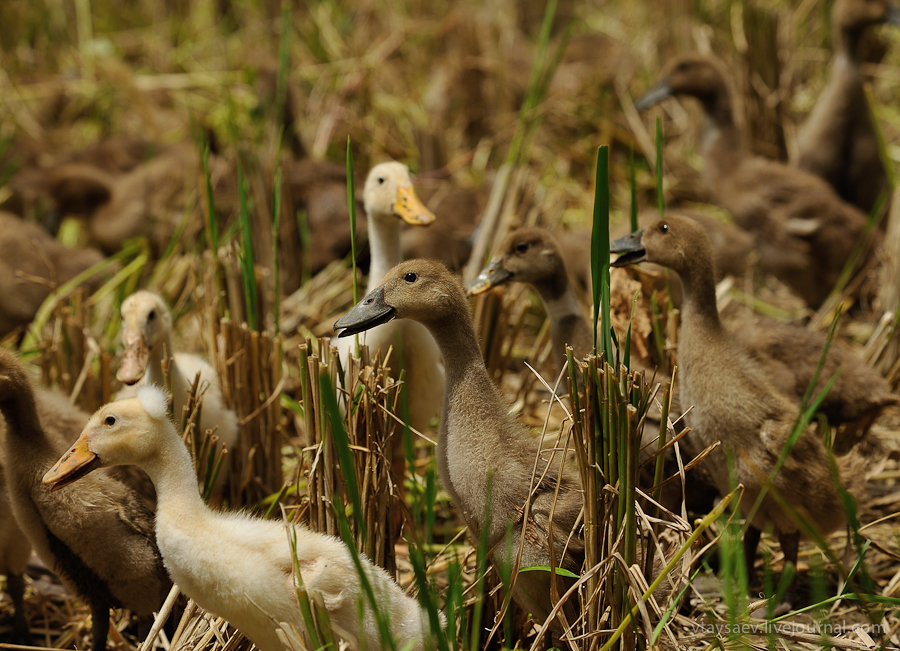 Duck feast in the fields for a few days, then they were herded into the basket and driven to another field. After vegetation seasons here is not particularly pronounced and eat feathered, there always! 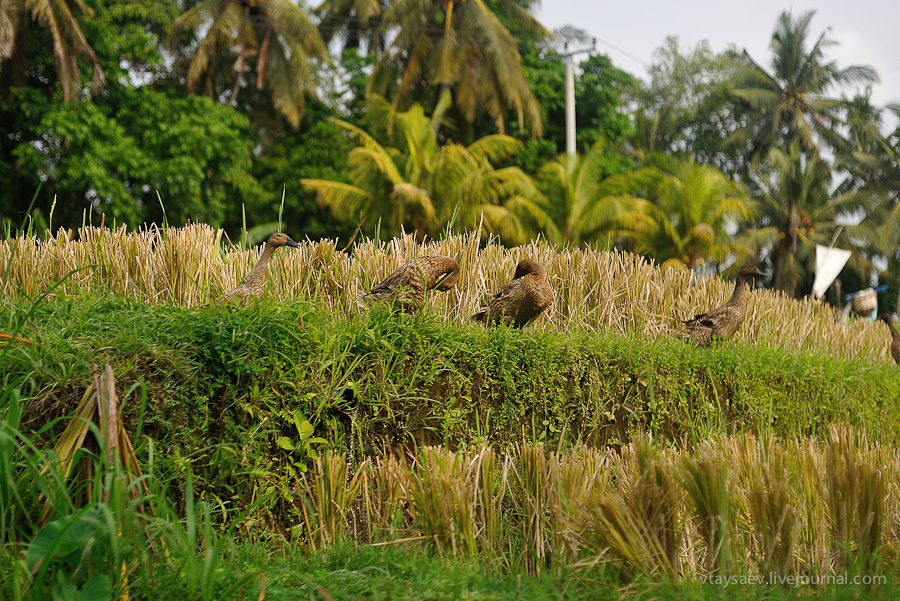 Here's a, this mysterious and ancient culture - Fig. By tradition, I invite all to his zhzheshku, read a lot of interesting facts about Bali and in general =), I will be glad. 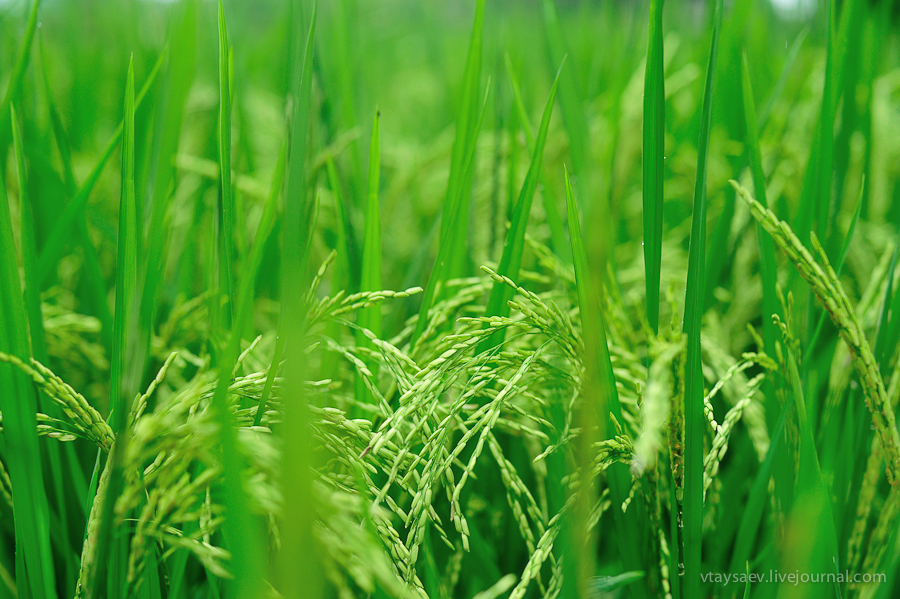