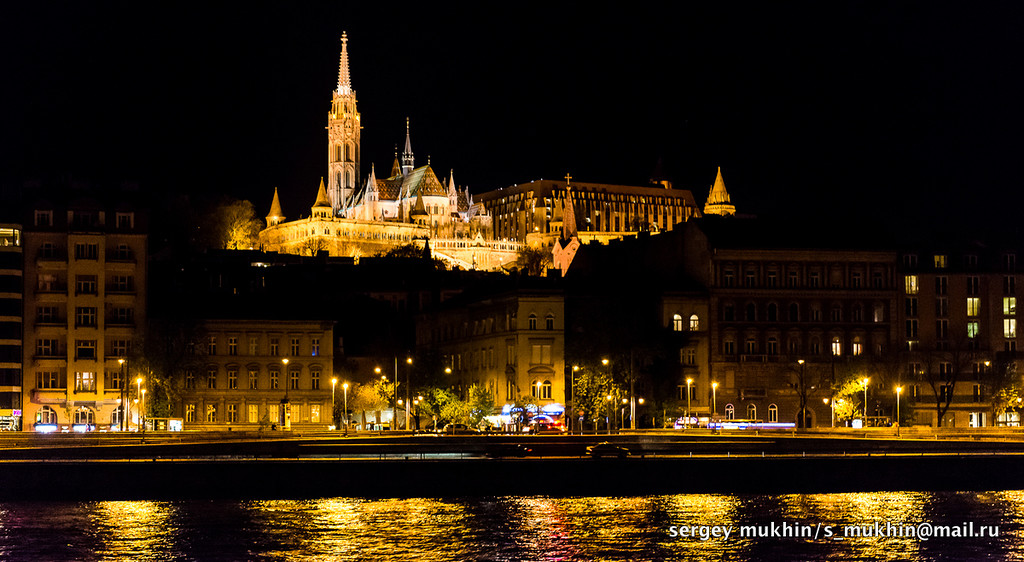 Vorosmarty Square resembled a Christmas fair, colorful garlands and wooden houses from the counter.
Yes, it has been fair.
One of the "house" surrounded by people who clicked their cameras, it was an incredibly lively.
Behind the counter, there was some idea. 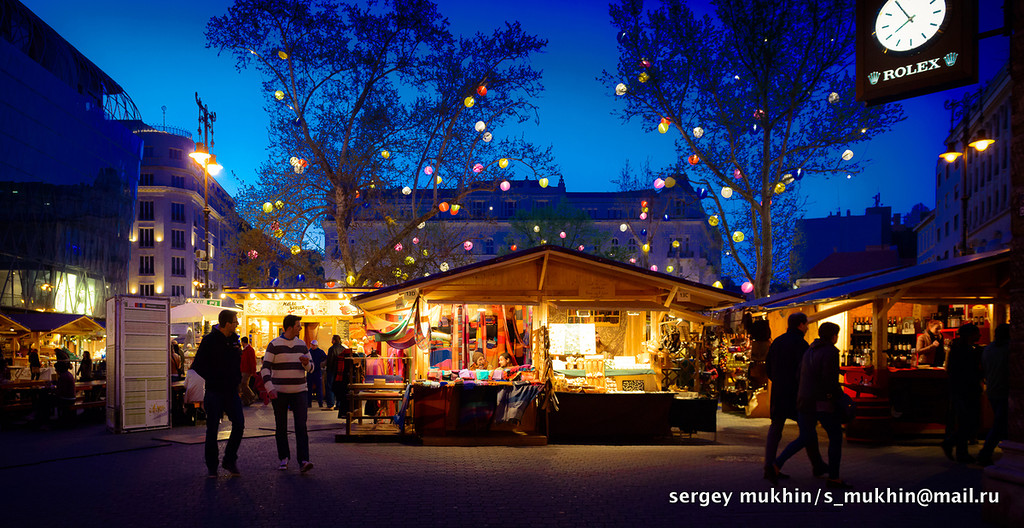 Funny guys in chef's hat, just juggled old cast-iron iron. Just the same old iron, once put in an art school for still lifes. Where are they to get?
A delicious smell of smoke spread around, causing profuse salivation.
Guys irons fried pancakes ... ... meat on trays and all sorts of things tasty, which is wrapped in the pancakes. 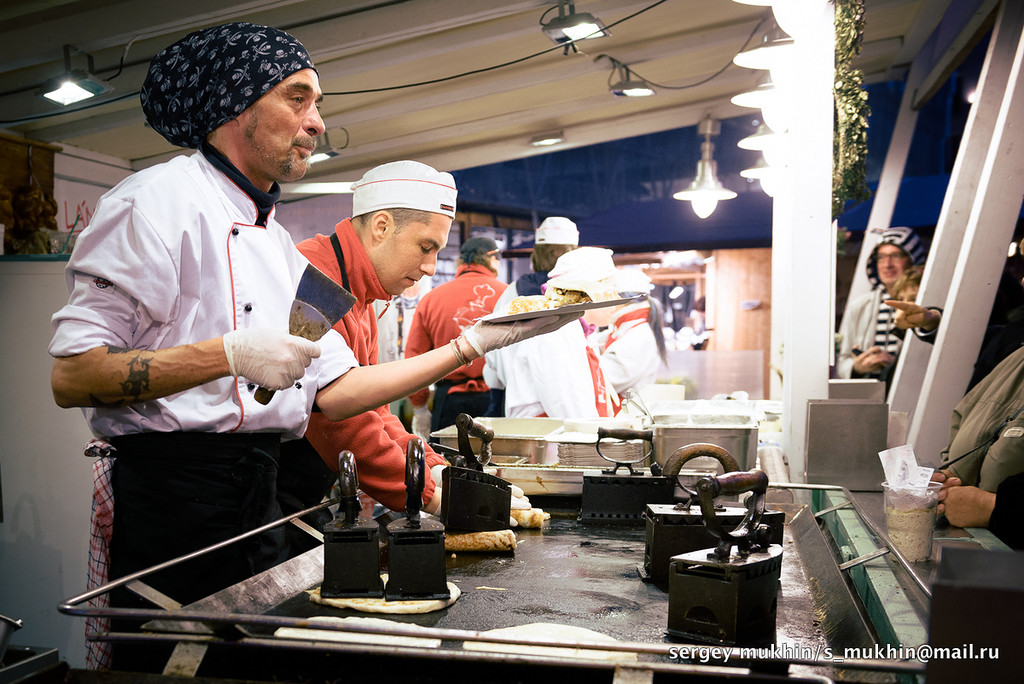 This is probably a good idea to get into Budapest, on the weekend, it was in the evening, when it begins to get dark, includes lights, streets and cafes filled with people and the city permeates the aura of the day.
Well, about as in the theater before the performance.
From the ship to the ball ... Rather ... the ship .. the ship. 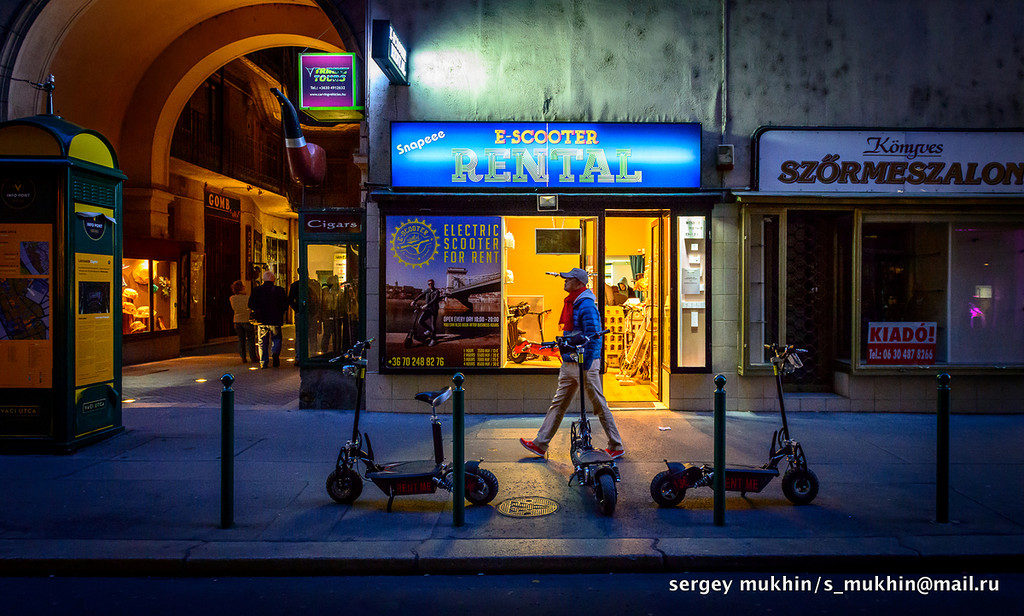 Boat trip to Budapest - a nice thing. You can go out on the deck, or hide inside the glass, both in the aquarium and treat swaying outside the city. On the big screen - Video tour - the film, along with floats picture outside the window, says that for a beautiful tower with a spire, this Minute on the right of the board. 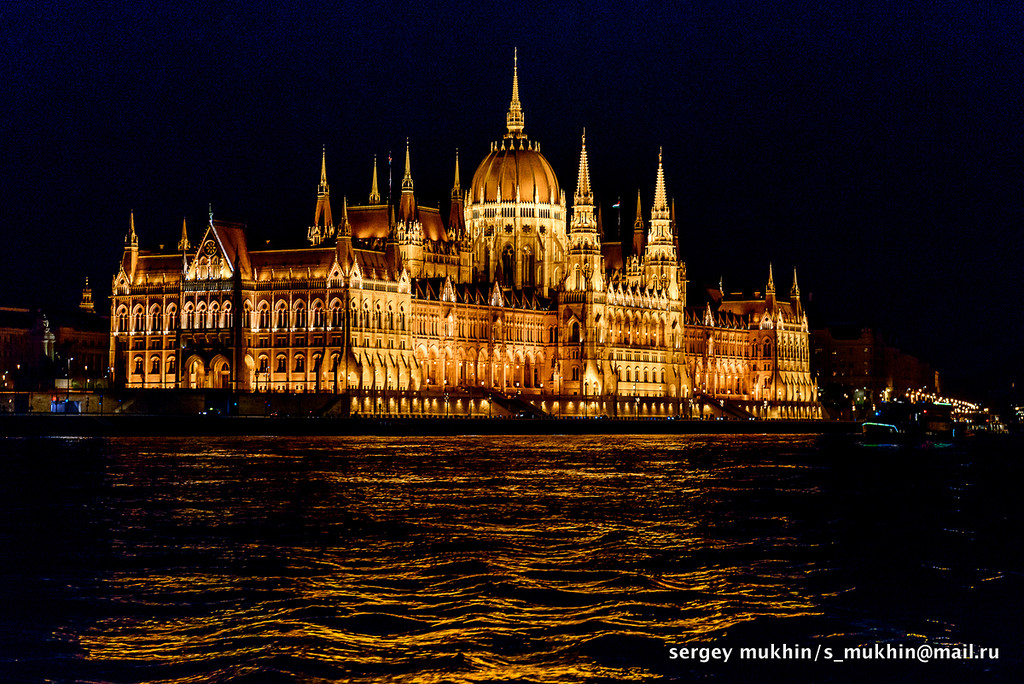 Each passenger headphones rely polyglot, with an incredible variety of languages.
You what? Japanese or Russian? ... Please.
And pustyachok- a nice glass of wine or champagne to choose from.

"I do not keep a diary during his travels. Once I started a diary and made ​​a big mistake. All I remember from that trip - it fragments, which I tried to write. The rest is completely out of my head, as if she was misled by the fact that I relied on pen and paper ... ... for the same reason I never take a camera. Otherwise, the journey turns into a set of pictures, and all that I forget to remove, disappears from memory. In addition, photos They do not cause any associations. When I leaf through albums of his companions, always surprised how little they tell me about the journey ... "Alex Garland" The Beach " 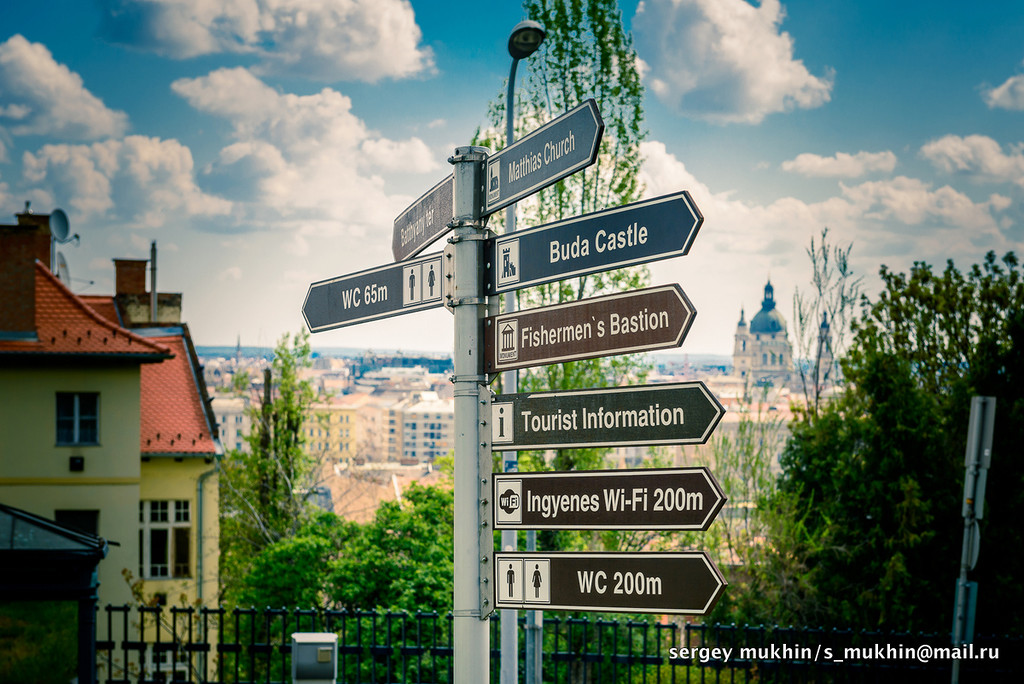 Probably not the smartest activity, run the ship with a camera, photographing the shore to the right and left. As a result of this running around, missed half of the film (the headphones are attached to the front seat and away with them not escape), therefore, it is easier to relax and have fun on the types of the window, excellent Hungarian wines Budapest and stories. It's amazing how many Hungarians brought to the ancient treasury of world science and culture. Cup cube, iGO and ArhiKadov, it is certainly cool, but there are many other wonderful things that did not know before ... 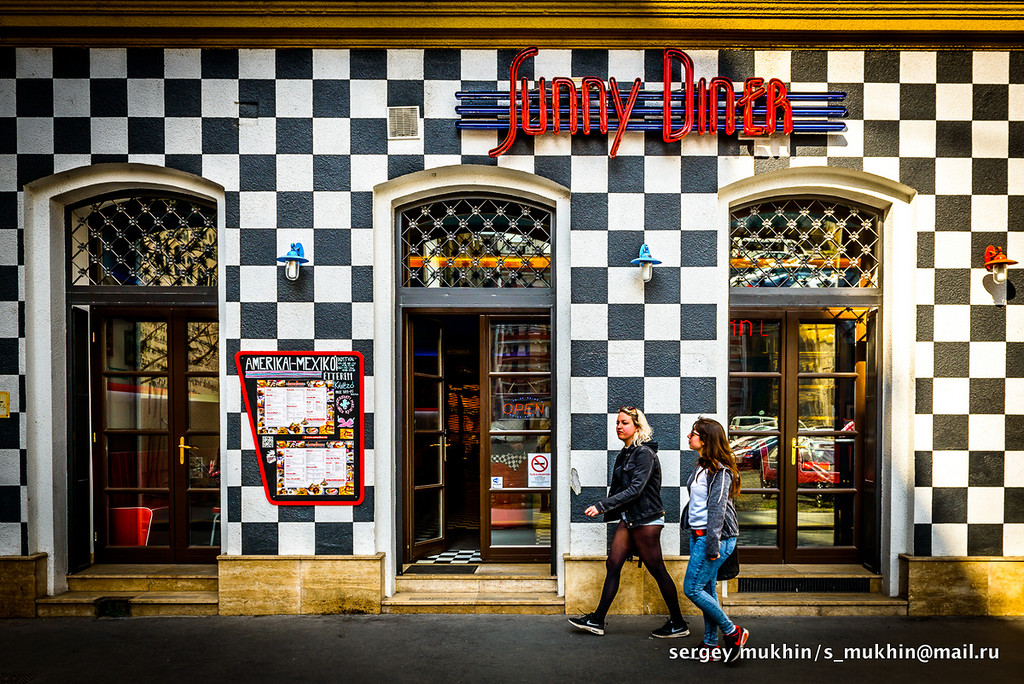 The restaurant and buffet looting, exactly three hours.
Three hours is more than enough to just eat. However, it is just as tasty. Very. Hungarians joke
- do not be surprised if you come home, you'll find that clothes, your clothes, you feel one size smaller.
However, the Hungarian kitchen-it is a chance to experience the power of the will))) But it's better .... like a month in the gym, it's worth it. 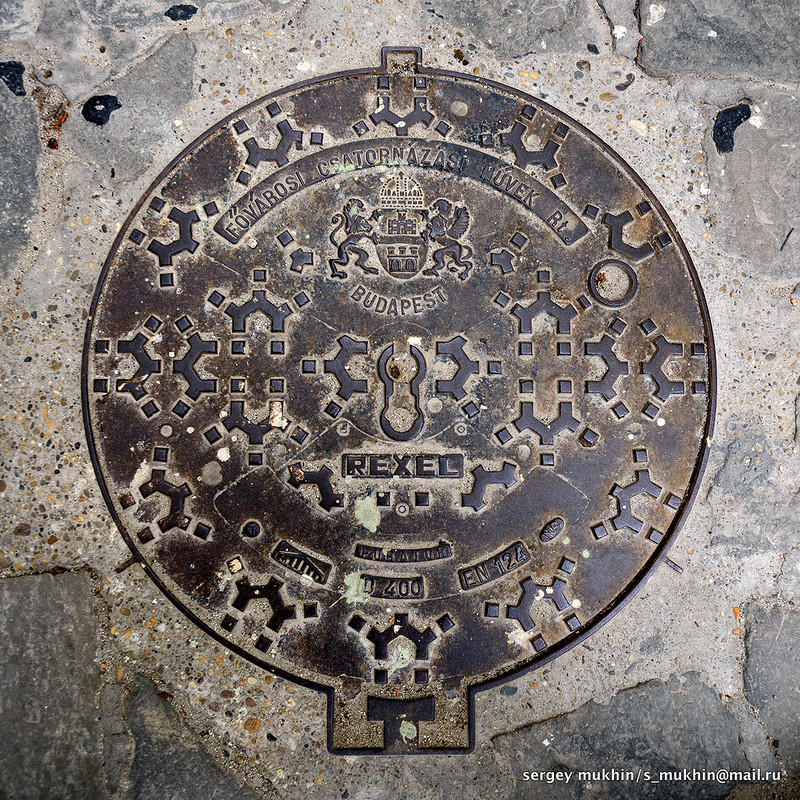 Street Gozsdu udvar - left side - bars, restaurants and cafes. Right storona- cafes, bars and restaurants. Gozhdu Udvar lights lit restaurants and sounds like fm radio receiver, which switches on the music channels. Ulitsa- holiday urban holiday. A sea of people, like a carnival today ... Saturday !!! Tavern Simpakert - old house. No, not the house, and what was once a home. Ruins. Walls of red bricks, with a broken plaster. Somewhere there is overlapping and now here atrium and through the hole, which was once the floor of the upper floor, the roof is visible. Outdoor patio. Live music. House privdenyami- trendy club in Budapest. Great start of the weekend. 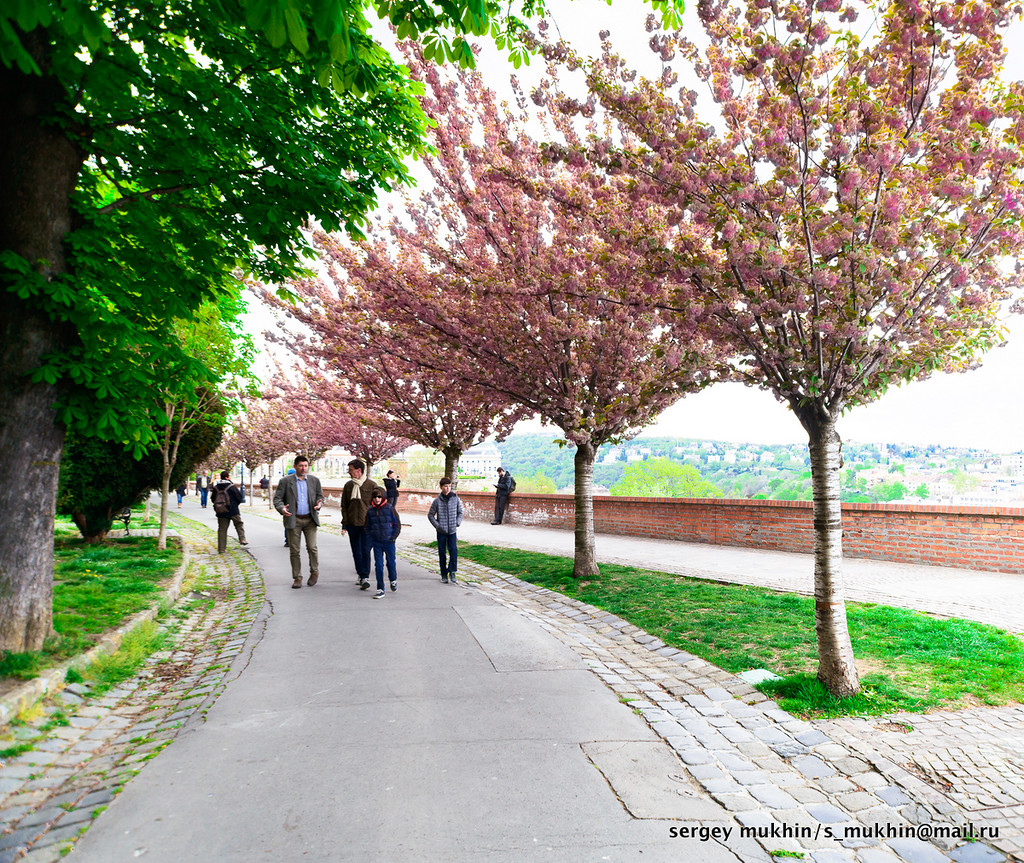 Thermal vanny- not the worst means to wake up.
The water temperature in pools 32 and 36 degrees.
The scent invigorates. It is said that to hydrogen sulfide can be used. At the very least, the benefits of mineral water is greater than the harm.
Hungary is rich in mineral springs, like other states, oil or diamonds.
However, in the conventional ranking of human values, diamonds are much higher. ... Although the health benefits of these no one disorder :-) :-), unlike water.
And they came to you? We go to see the city .... 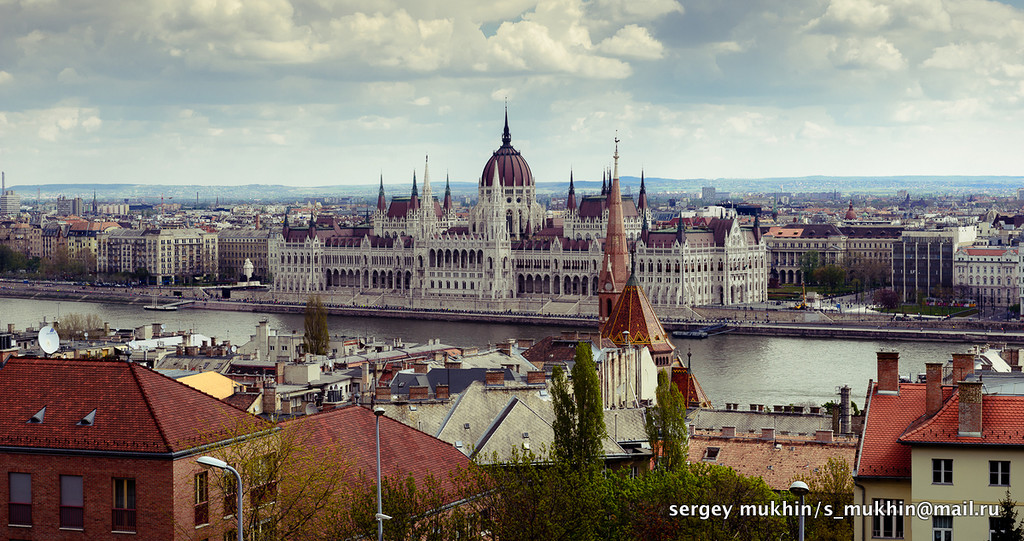 Budapest - beautiful incredible, its remarkable silhouette, with spiky towers.
Danube cut like pie in the Hungarian capital Buda and Pest, and gave the city two extraordinary facade looking at the river.
And the landscape of Budapest was lucky - the high right bank - Buda and low, left - Pest - specific points pampered and beautiful panoramas. 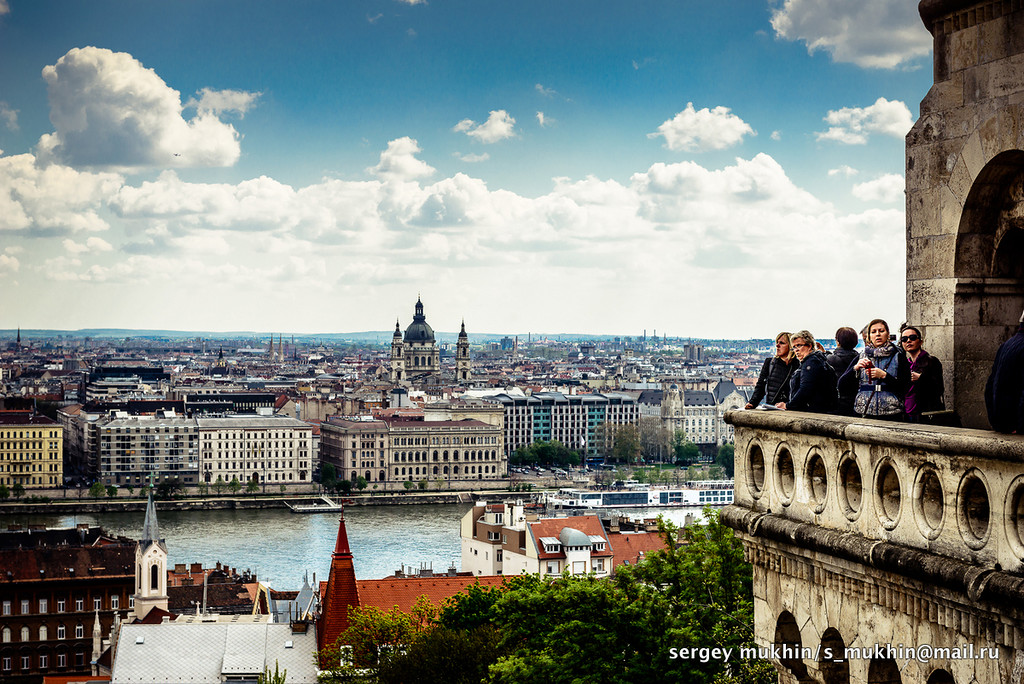 On the highest hill of Buda, as befits the ancient city, stands the castle - the castle of the Hungarian kings (Királyi Vár), in
the Buda Castle (Budai Vár) - and the Royal Palace (Királyi-palota). 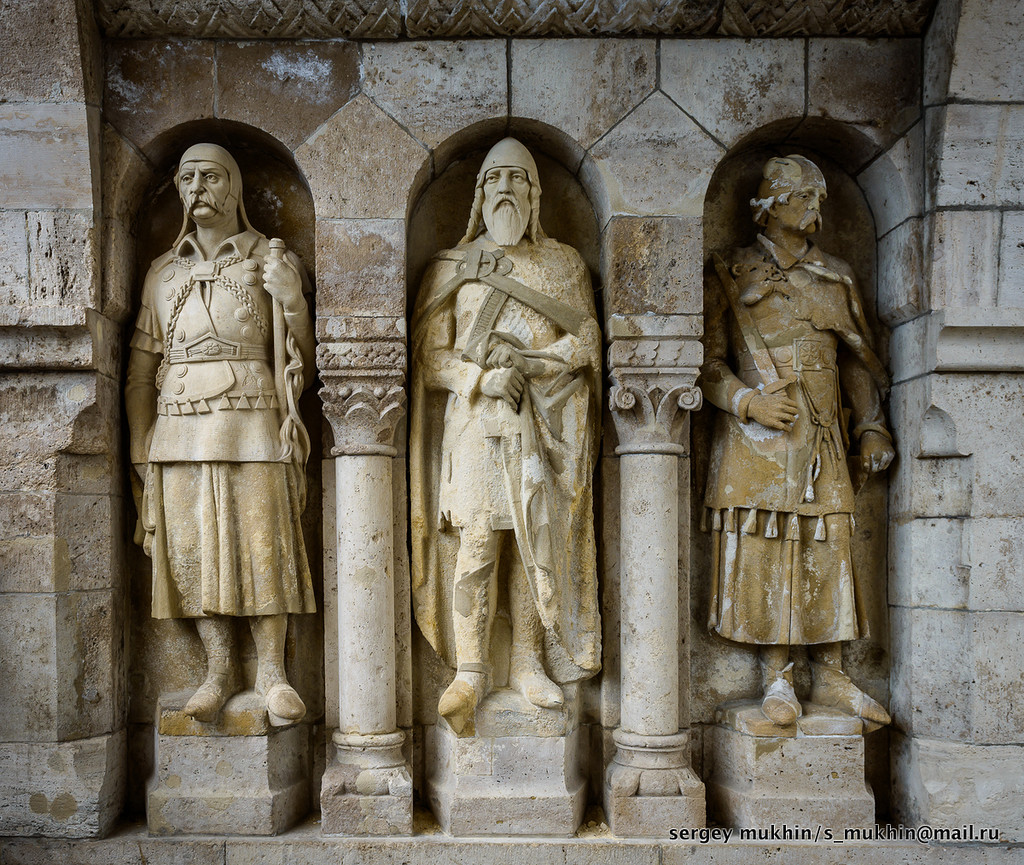 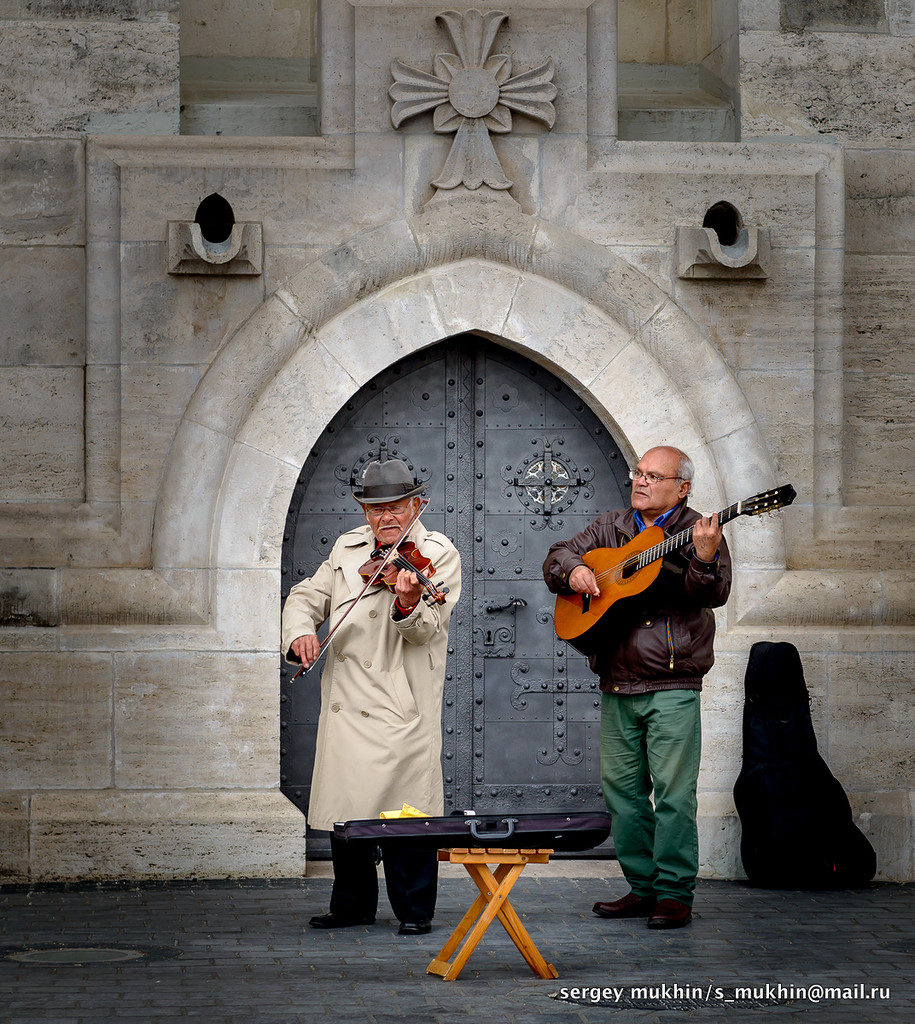 Fishermen's Bastion - despite the gallant name rather decorative than strategic structure, built in the early twentieth century. Six romantic, ostrokonechnynyh towers, by the number of tribes united once and formed the Hungarian state and the connecting gallery, with magical views. Instead of fairy princess, this wandering tourists.
And the Fishermen's Bastion - because it was built on the site of the old ploschat, front of the cathedral, where he once sold fish. 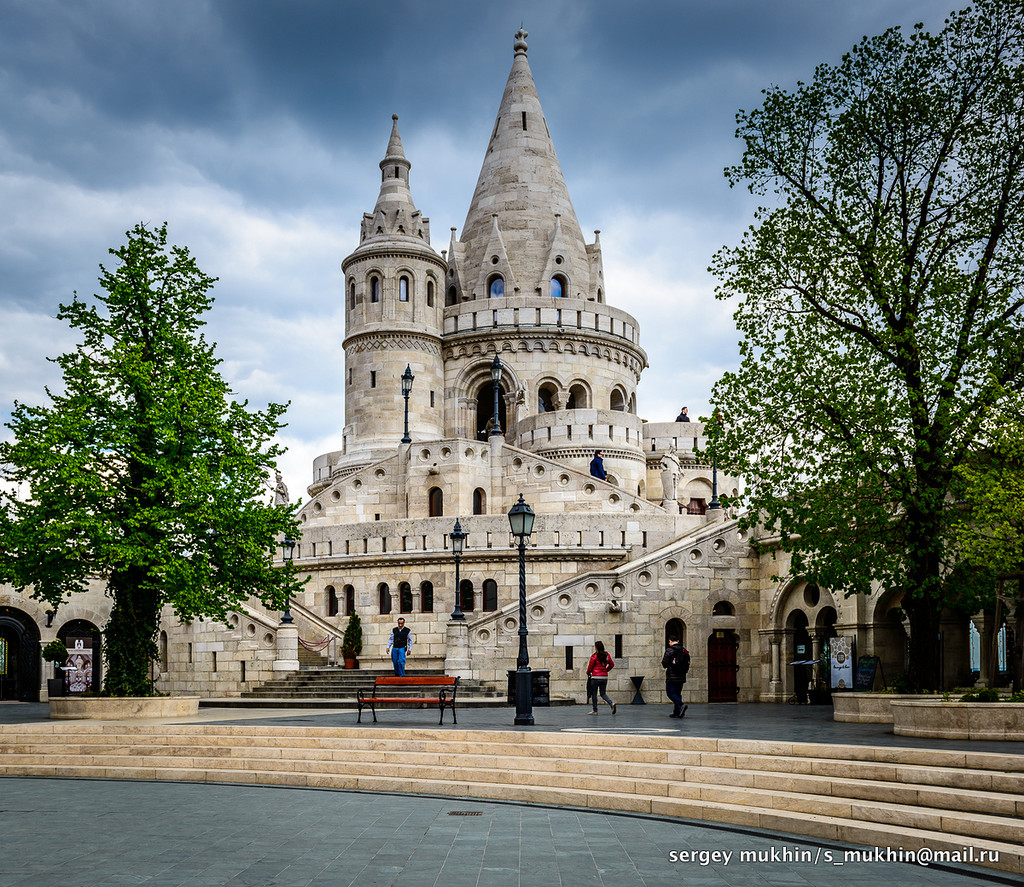 Monument - the equestrian statue of St. Stephen - the founder of the Hungarian state.
Green with time, the monument seems to be quite old, but has been set to the millennium of Hungary, in 1906. 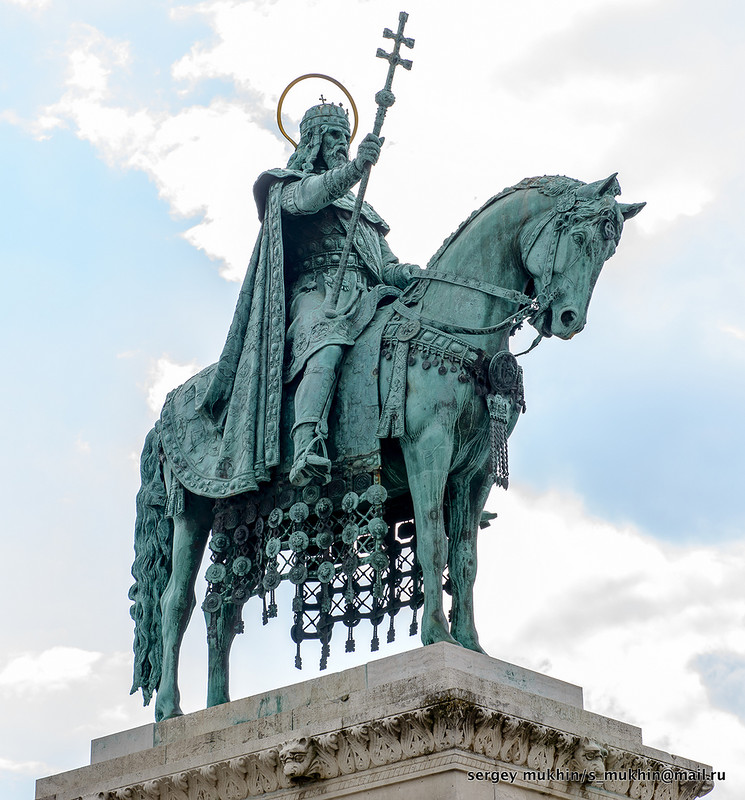 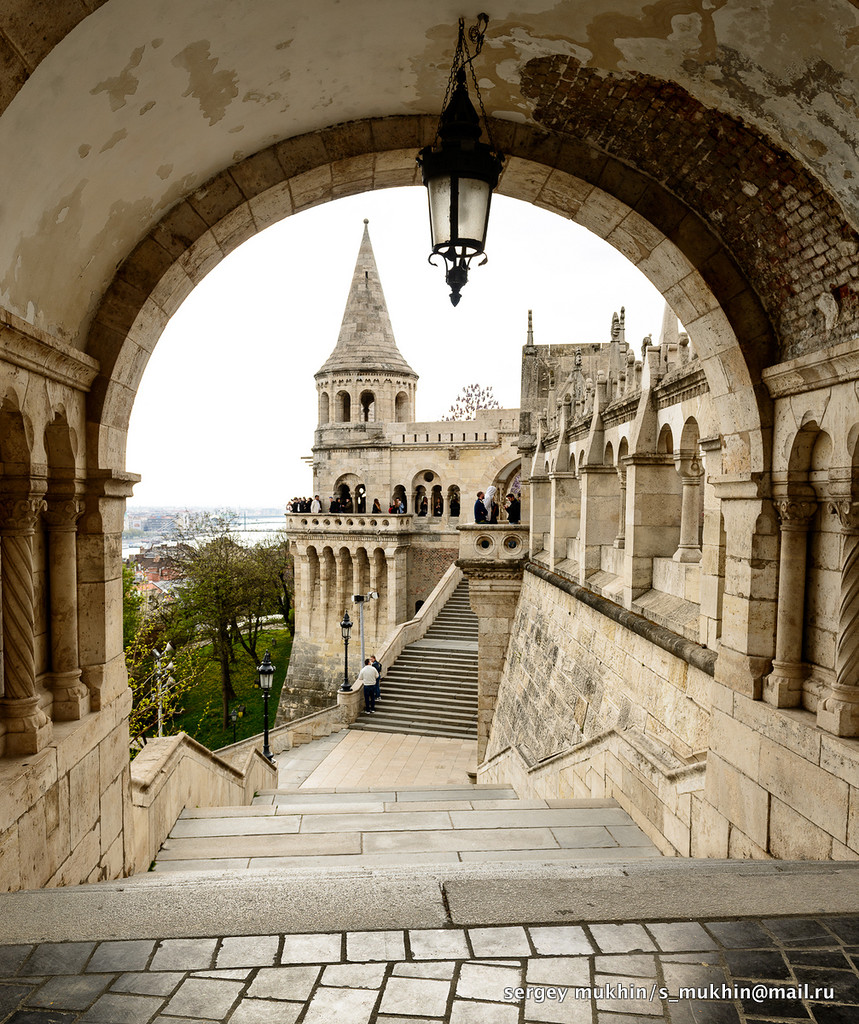 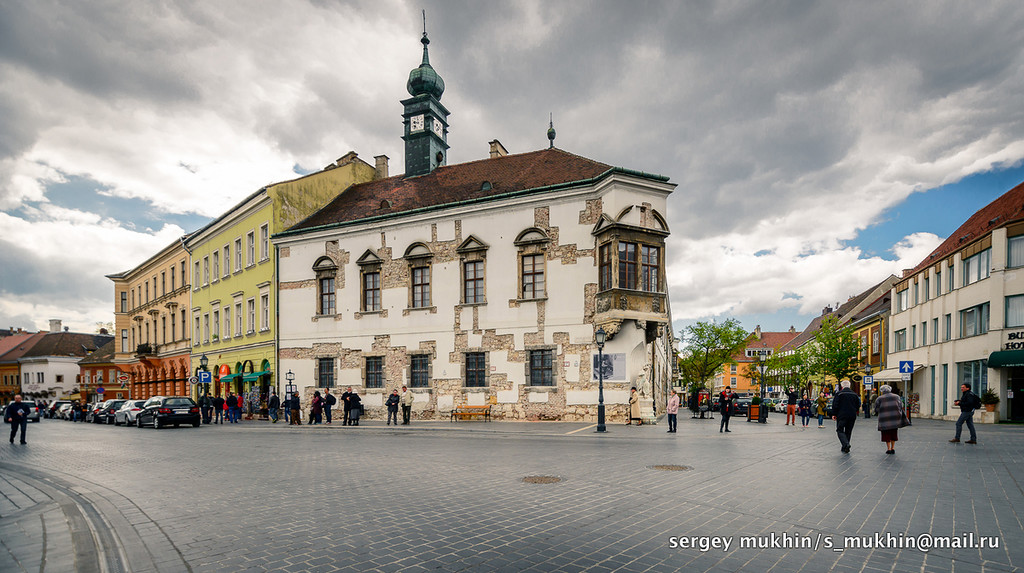 For the Fishermen's Bastion, the square - the Gothic Church of St. Matthias (Mátyás-templom), with an amazing, long and troubled history, worthy of the historical novel.
The first church was built on the site at the beginning of the XI century, died as a result of the Mongol invasion .
Built in the middle of the XIII century, a new, Gothic church, a hundred years later it was rebuilt, and in the XVI century, it was captured by the Turks and turned into a mosque ... Then there were the Franciscans, who succeeded the Jesuits Church ... even tried to give a view of the Baroque, but then I left this venture ... to complete the stage of construction and reconstruction until the end of the XIX century, when the cathedral was given the original Gothic look. By the way, this time almost coincided with the construction of the Hungarian Parliament. You do not find echoes of the Gothic Church of St. Matthias in beautiful Budapest, construction, made ​​in neo-gothic style? 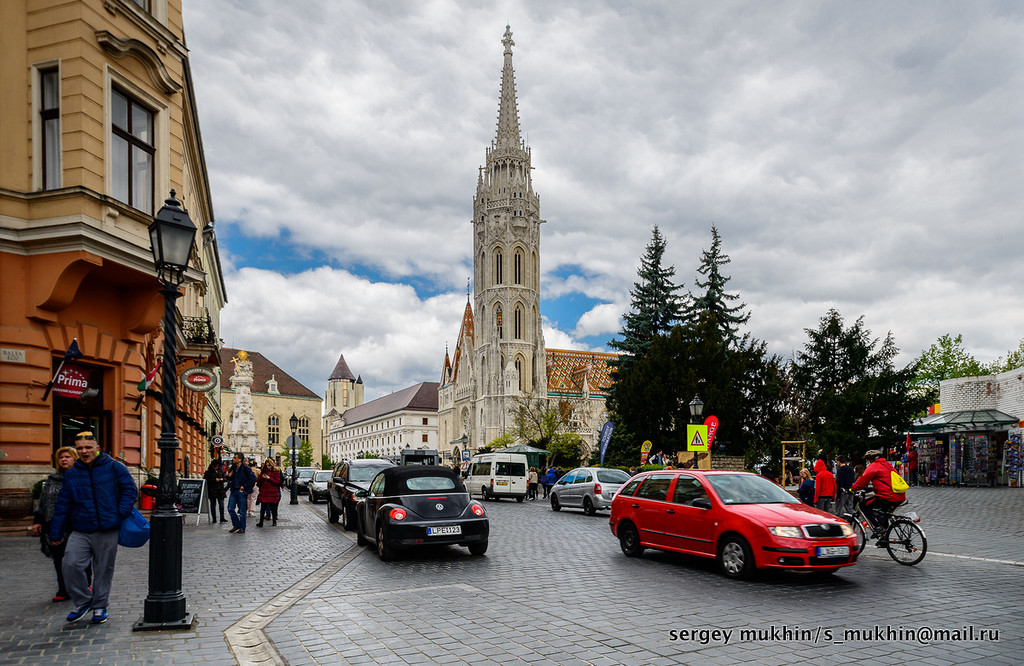 In the historic quarter of the cathedral - the street ... bend, giving a beautiful, lively perspective.
When it is not clear where the street ends, but you know exactly what's ahead, there is something for sure ... ... more ... and it is pushing to ensure that to go on, at least out of curiosity.
Old houses - refurbishment of old, old and new paving stones, but the old spirit .... and the ruins - the remains of the brick walls and foundations. The Buda Castle, in addition to the Royal palace, still is the Hungarian National Gallery, the National Library named after Szechenyi, Budapest History Museum, the presidential residence .... 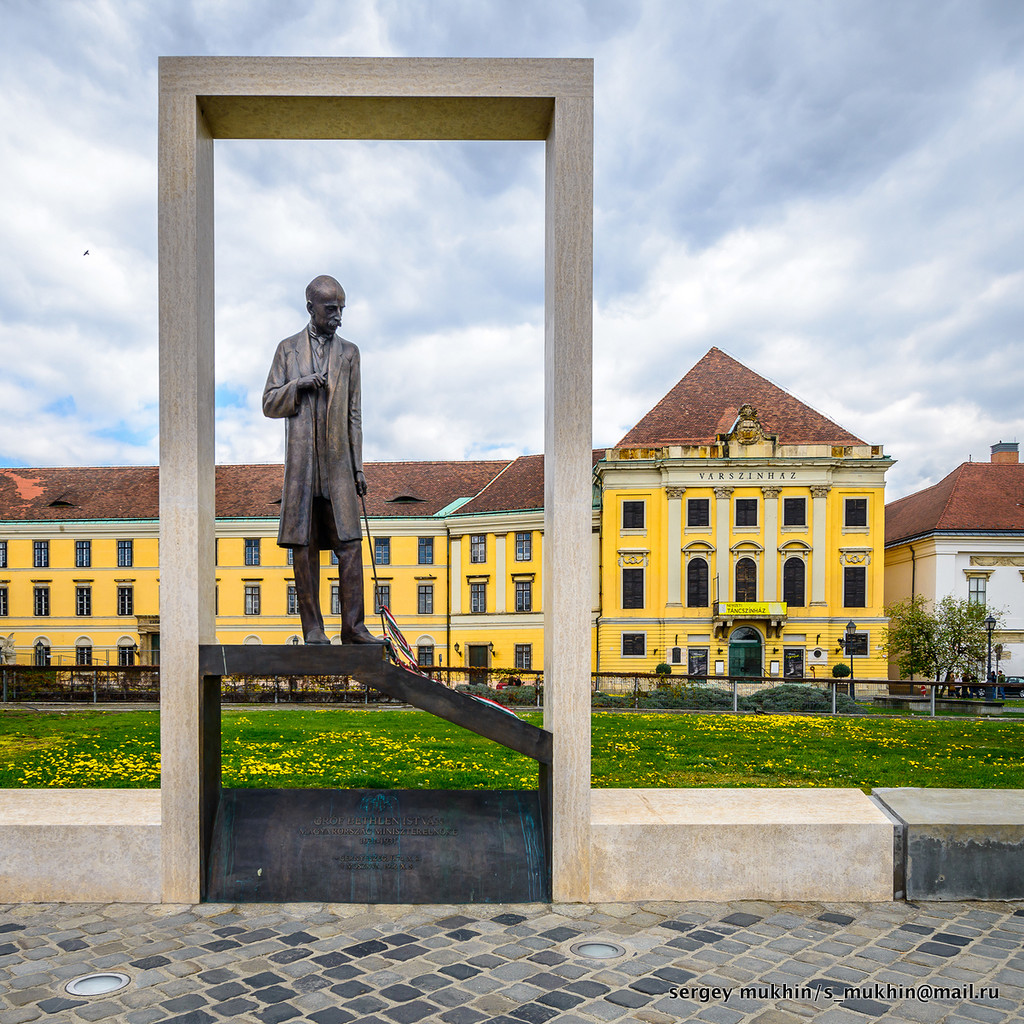 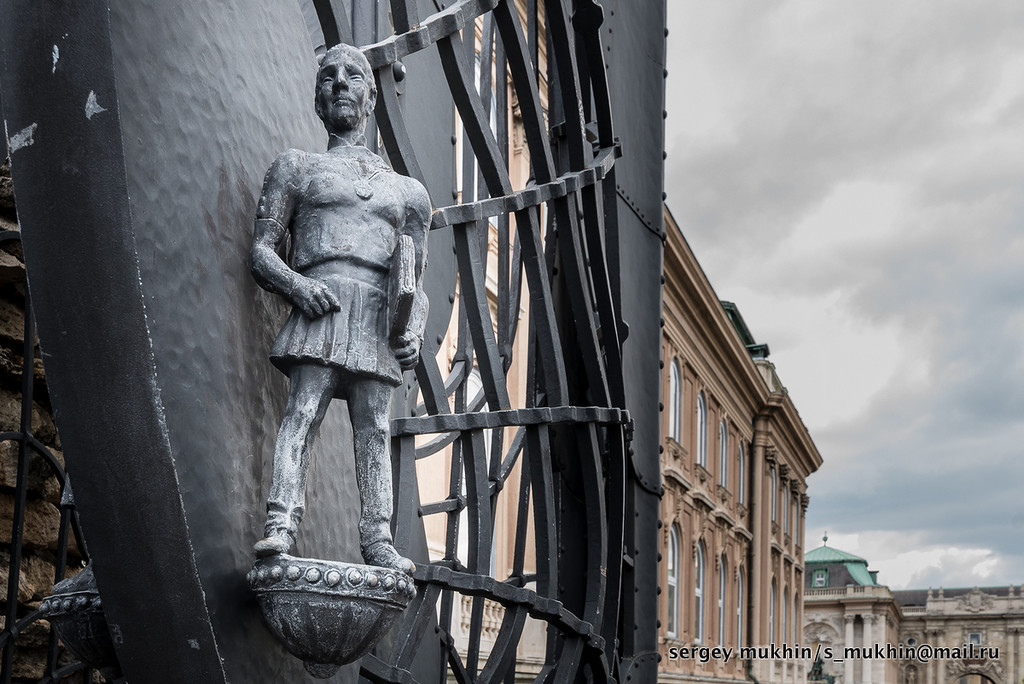 That guy at the gate, it is imperative to find .... over his head sits a raven. Hungarians say that if you go through the gate, a raven, then be sure to get rich. How and when that happens, the details ... I do not know. Probably, your credit card will replenish a few forints :-)
In a pinch, lucky in love :-) 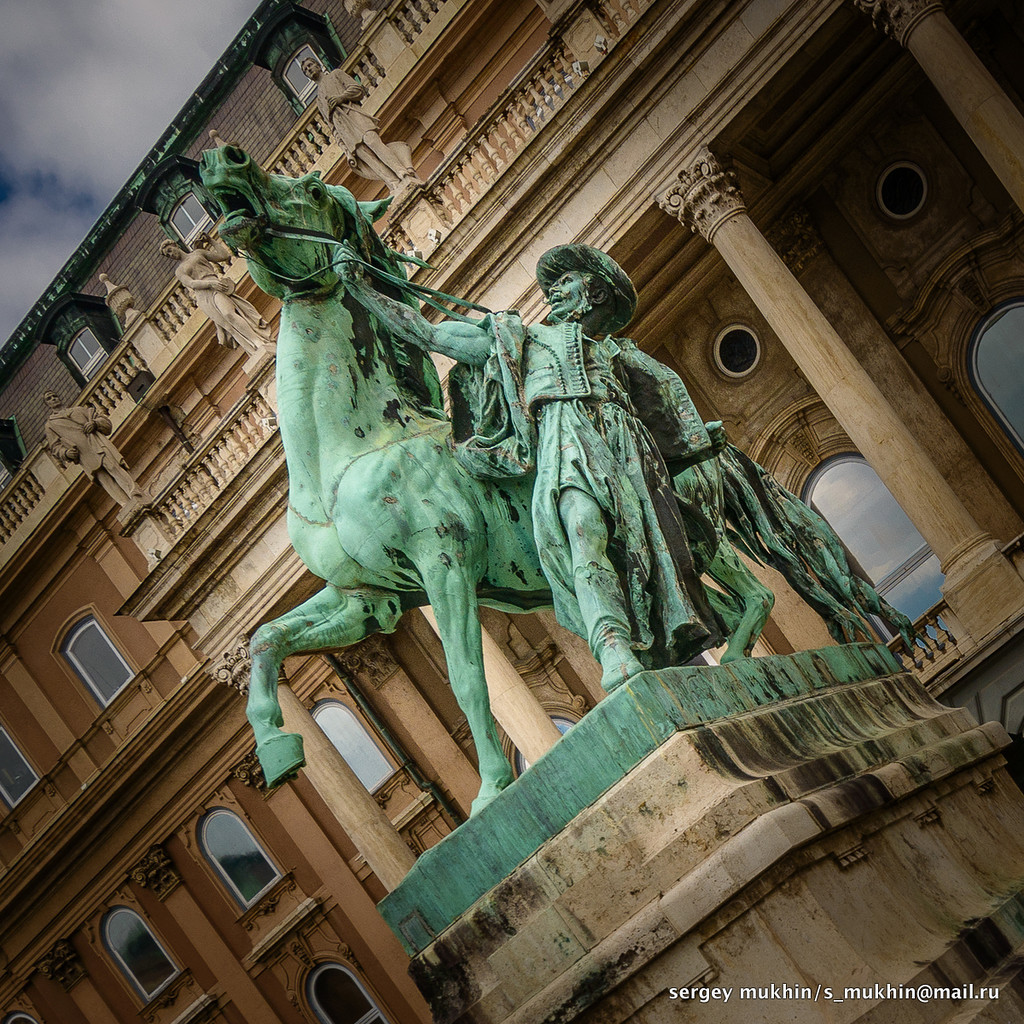 Sculpture hortobadskogo Cowboy, 1901. It turns out, the Cowboys lived not only in American westerns, but also on the Pannonian plain. According to another version, it is not no cowboy, a tamer of wild horses, which is close in meaning and rather it is a question of terminology.
This monument on the square in front of the Hungarian National Gallery, before standing in front of a riding school. 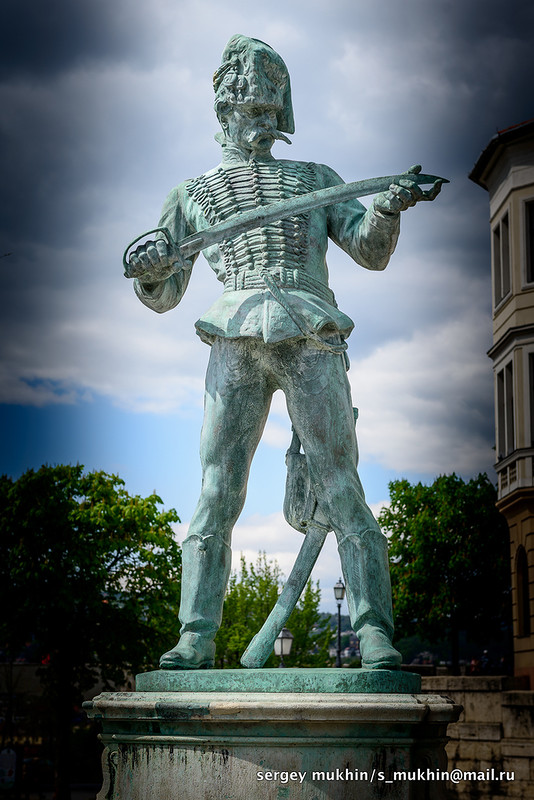 Near the cowboy on a nearby square, Hungarian hussars checks sharp blades since 1932.
In Budapest many sculptures, they are curious to look at, they are interesting, sometimes witty and not all green, but the color of the noble patina statues definitely going to want to appear older than it actually is. 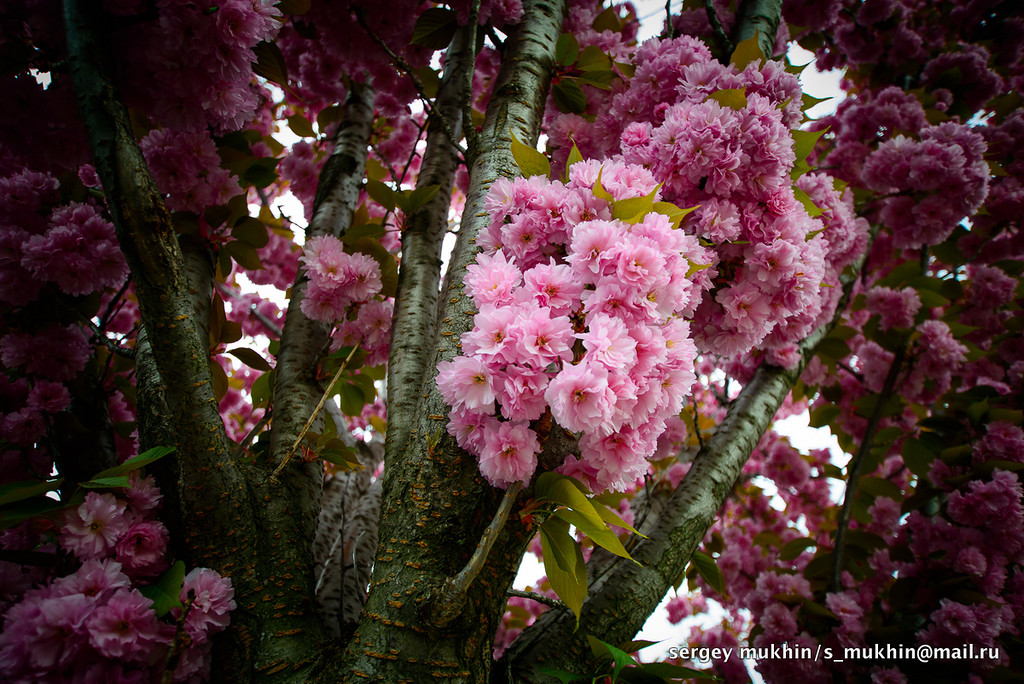 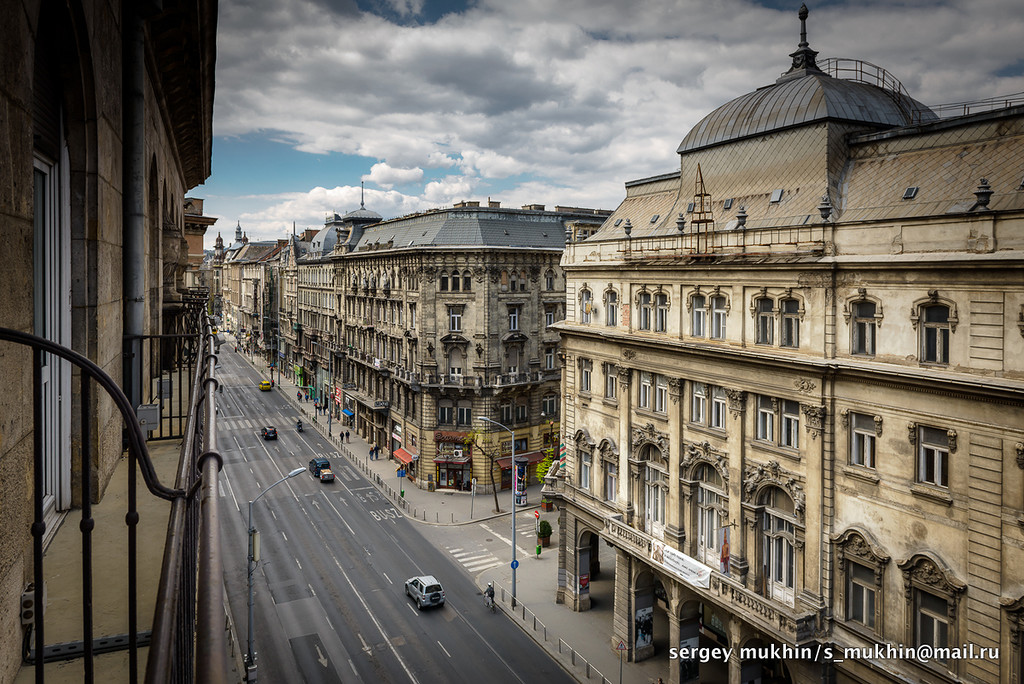 This form can be opened from the balcony of the hotel "Grand Budapest" (Danubius Hotel Astoria). 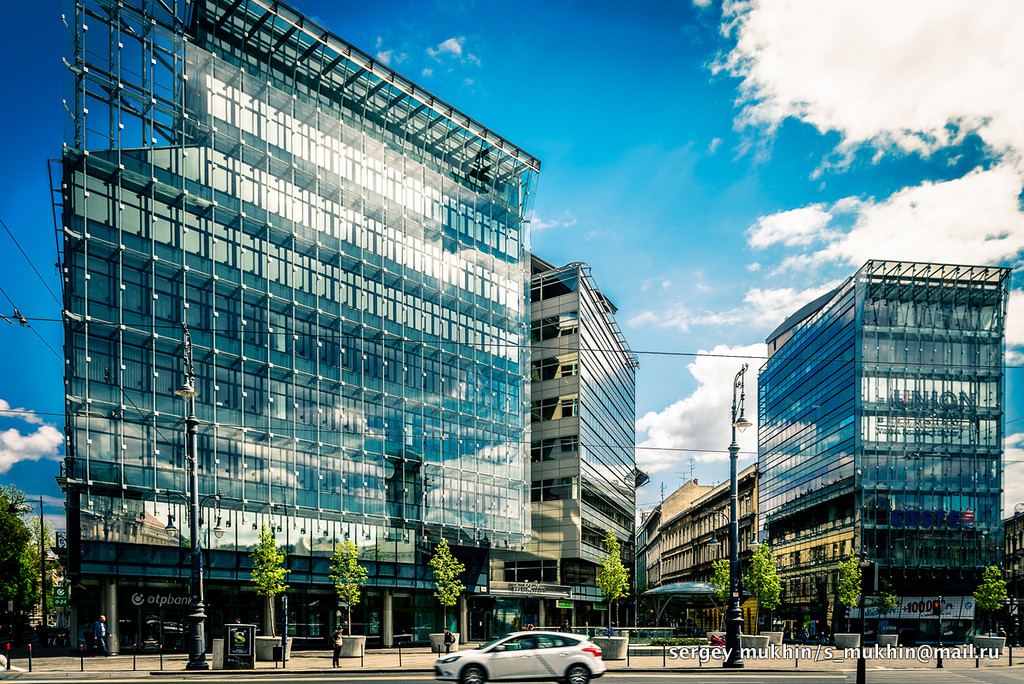 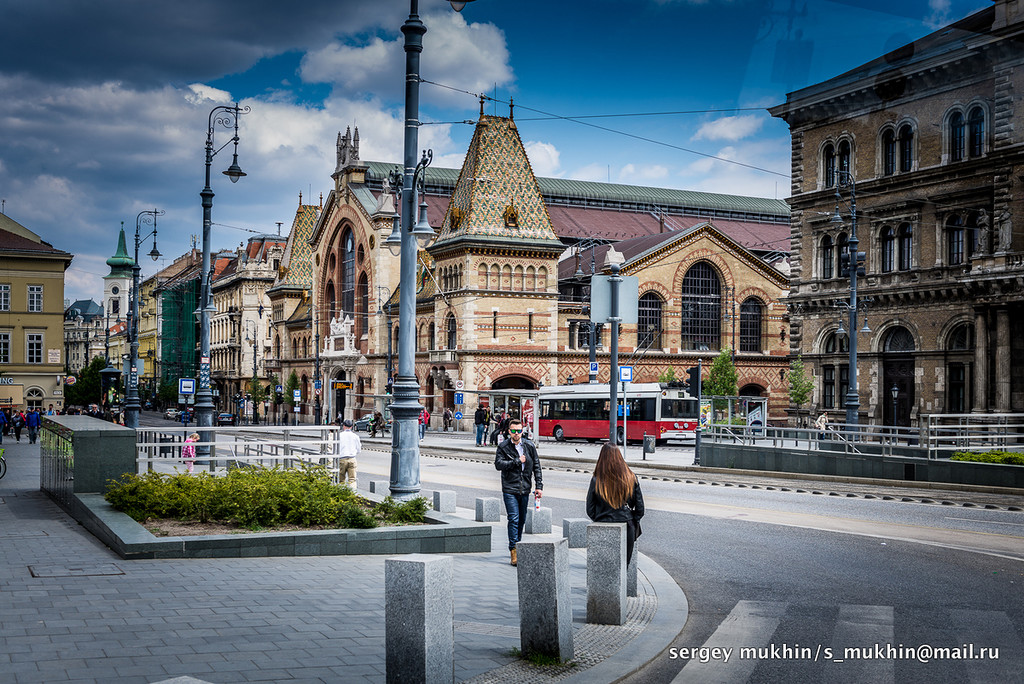 Generally, the old and the new often coexist, making the city alive, I like it or not, but this is the most European capitals. 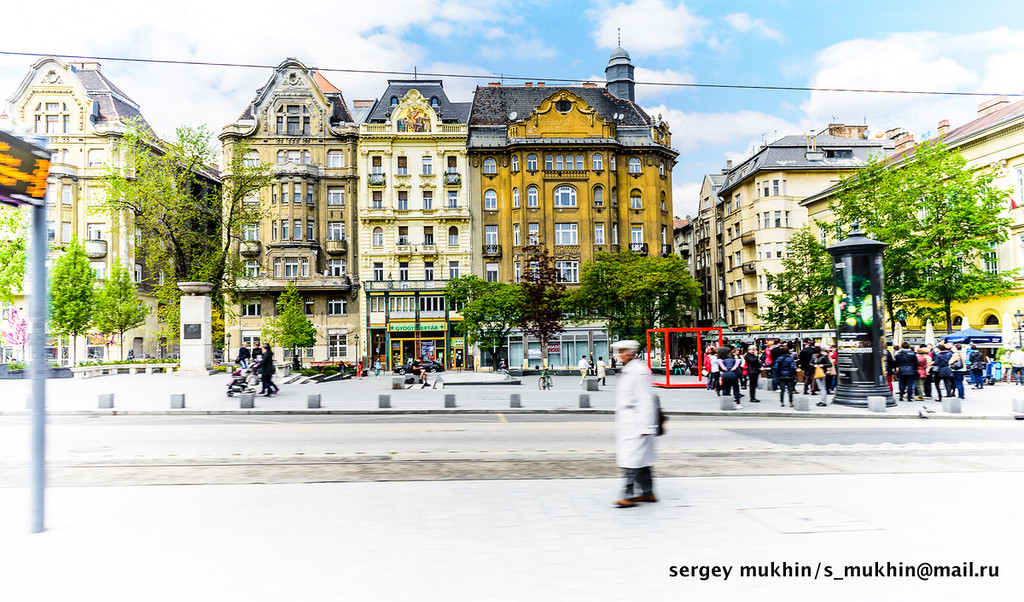 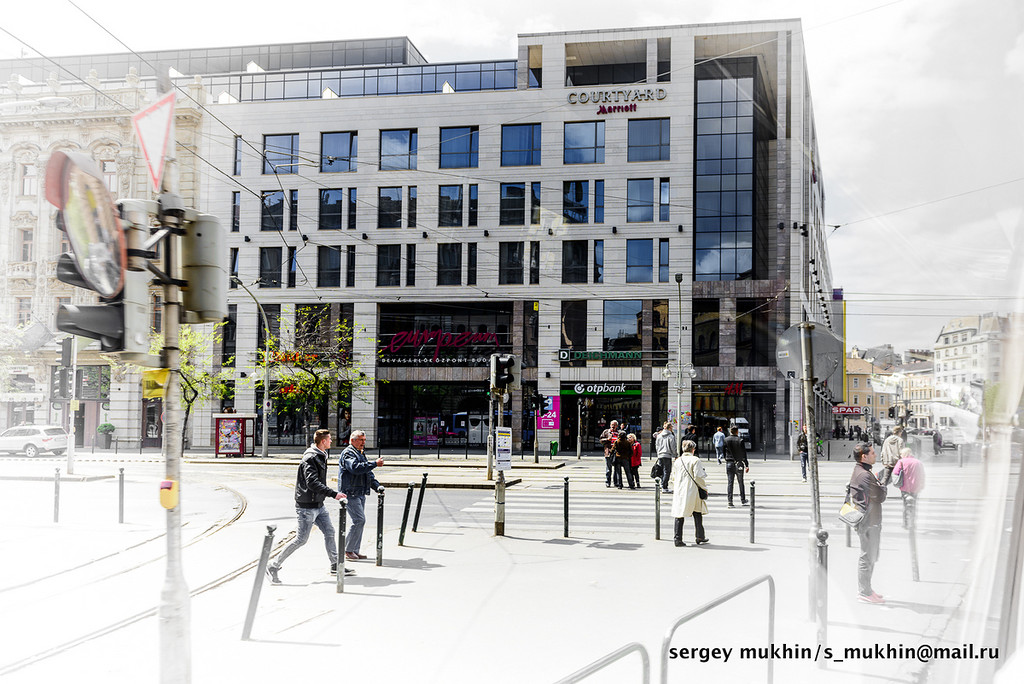 I will not bore a long story and a bunch of pictures
will continue to walk in Budapest, next time ....