AdBlock detected. Site operation may be disrupted due to running AdBlock. Please disable it for this site.
Home Stories Greece

I'll tell you about our wonderful honeymoon on the island of Crete.

Arrived at the hotel around 7 am, at the reception we kindly greeted by the owner, congratulating the fact that we are lucky and our room is ready for occupancy. This news caused a huge relief, since we are setting yourself up for another 5 hours so mindless pastime in the hotel lobby. Despite the fact that wild sleepy, we immediately went to the sea, then walked almost the whole city and see what's in and immediately began a search of the car. Most of the cars were on the mechanics. We wanted a convertible on the machine (have decided that I will be driving), so our task is complicated vdvoyne- needed to find Convertible on the machine. Convertibles were full, but on the machine is not so easy to find. But we found Peugeout 307 automatic, made a pledge of EUR 50 and agreed that tomorrow at 8am pick machine. The next morning, fully packed with a bunch of bags come in a rolling office, the meeting came one of the staff, saying that that our kabioleta broken roof ... Hmm. Convertible, with a broken roof-not convertible. Deciding that this deception and that our car just to give someone a higher price, we take the money and go look for another office, where on the island at every step. As a result, we find the Opel Tigra. But ... she mechanics. Well, we decided, the driver will be her husband, although he was very worried how he would go, since so many years did not go to the mechanics, we are at your own risk and booked it the next day. 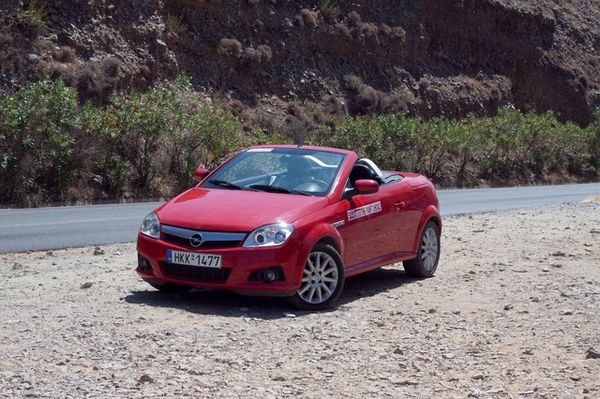 In addition to car rental in Crete is very common rental ATVs, mopeds and motorbikes. Since the day we were free, we decided to take a quad bike and ride to the nearby town of Malia, swim on their beach.
The maximum speed at which it moved shtuka- -So where 50 km / h :) We drove along the road we probably forever, in stupid helmets, but dovooolnye ... unreal sense of freedom, which is then amplified by a factor of 10 when we first got to our Opel.

Blowing wind in your face, the scorching sun in the head, on the one side of the mountain, on the other, an endless sea (by the way Crete washes their entire 4) and the types of extraordinary beauty, opening the road. What could be better ... The beach of Malia. 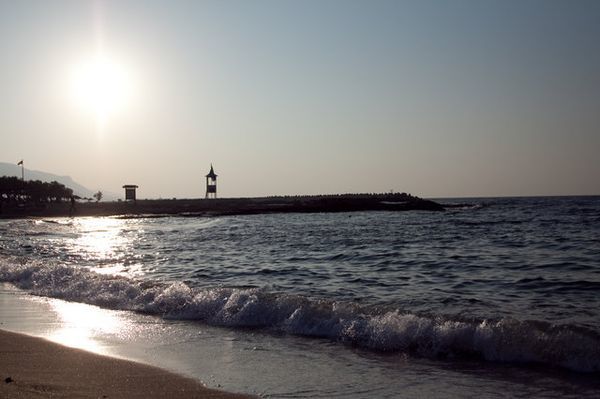 The monastery, which we stopped along the way. 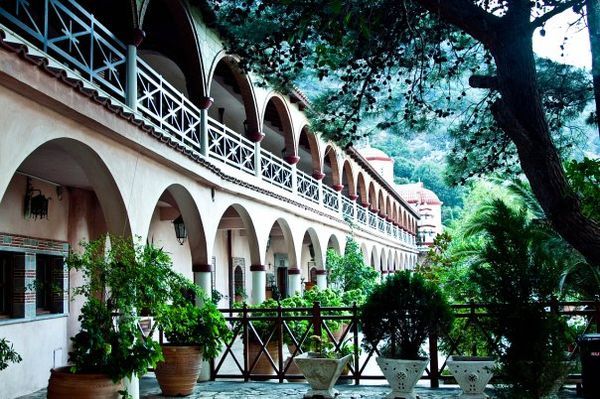 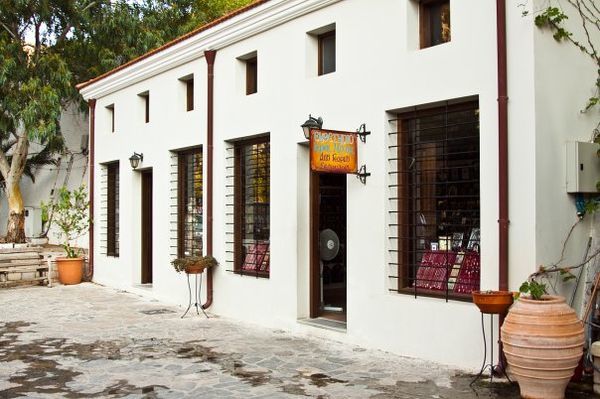 The next day we went early in the morning for our car. Before you get behind the wheel, Dima asked the Greek "remind" him how to ride on the mechanics. He gladly rode with him a short distance, then Dima driving a car drove up to the hotel for the bags, I followed him on the ATV. Check out the main street there was a small hill on which Dima had to slow down, that's the first test. Standing behind the car, it was very scary, seeing that she just moved on back. But he did it. After we went to Heraklion, where tupili hundred times, went on the wrong street, glohli, went in circles, with grief in half, we still found the famous Palace of Knossos, which was not impressed and represented the ruins ... By the way, all Greeks are very nice and helpful people. Getting lost on the streets, we slowed down near one of the machines in the private sector, where the elderly couple sitting Greeks, ask them about the whereabouts of the Palace of Knossos, grandpa went to the neighbor's house and found a guy who spoke in English, which is all explained in detail. On another occasion, when we get lost, found another grandpa riding on a moped, who went ahead of us sent us to the right path.
Palace of Knossos. According to legend, in the vicinity there is a labyrinth of Daedalus, where he was imprisoned the Minotaur. 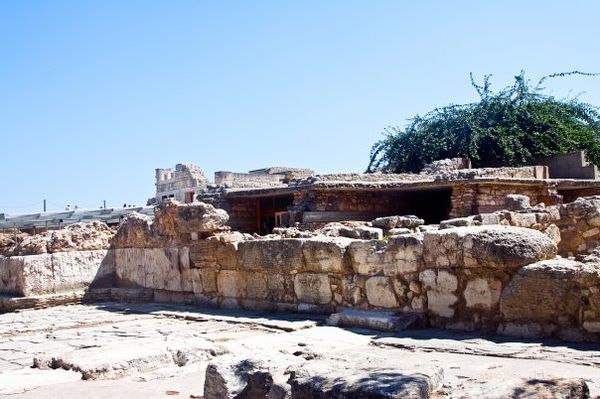 Next, we went to the Bay of Balos, photos of the places I saw on the internet before the trip and immediately fell in love with him. 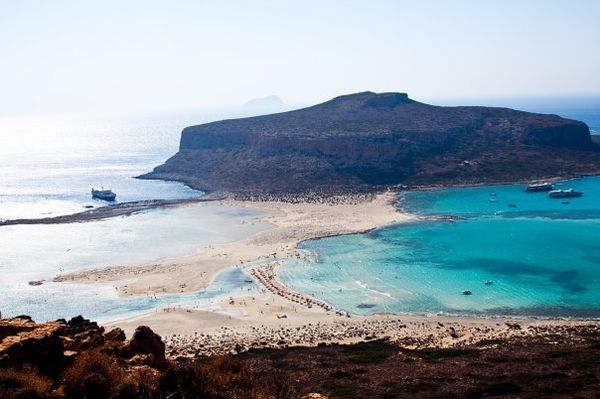 But we do not even suspect what will cost us to get to her. 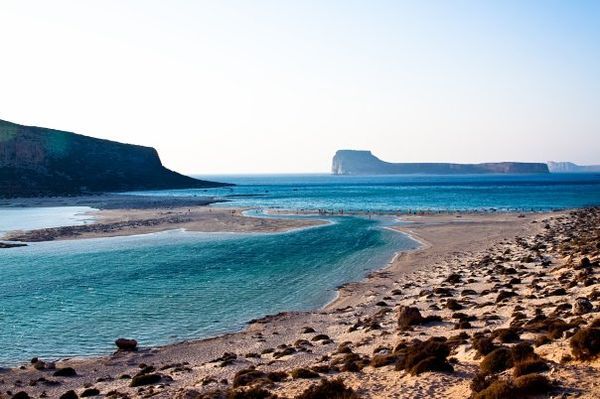 On the way to the bay, we stopped at a gas station, Dima decided to find out how far it was to the right of the bay and we were going. We drove for about 200 km ... Greek, find out where we're going and looking at our car, we said that for anything, never in my life will pass on Balos in our car ... The road into the mountains is very bad and bumpy. Departed from refueling, we dedicate and decided that despite the words of a seasoned Greek, we still take the risk. To the bay was about 50 miles ... So, we stopped in the mountains, why in the beginning, we laughed about the fact that we were told by a Greek. Yes, the road was bad, but on such roads we drive all the cars. The higher we climbed into the mountains, with a speed of 7 km / h, it was worse. Holes were bigger, steeper turns, breaks all of the above. But the kinds of indescribable! 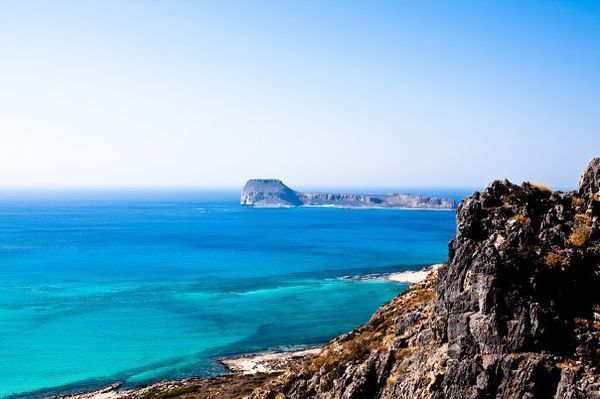 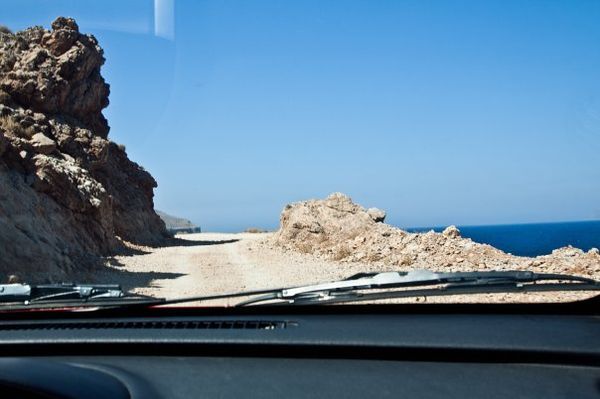 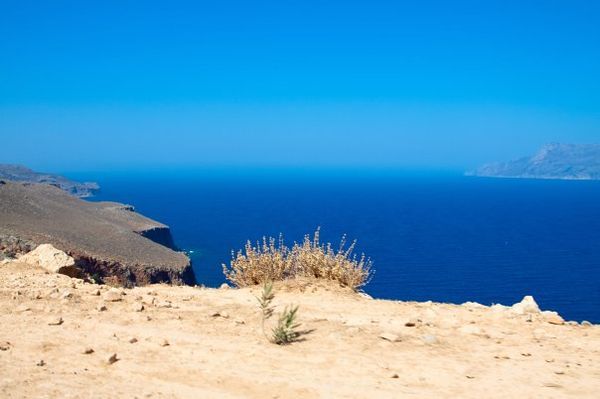 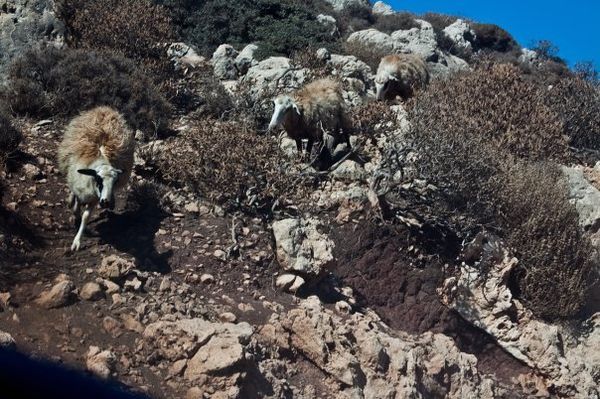 In the parking lot turned out that they also hand. 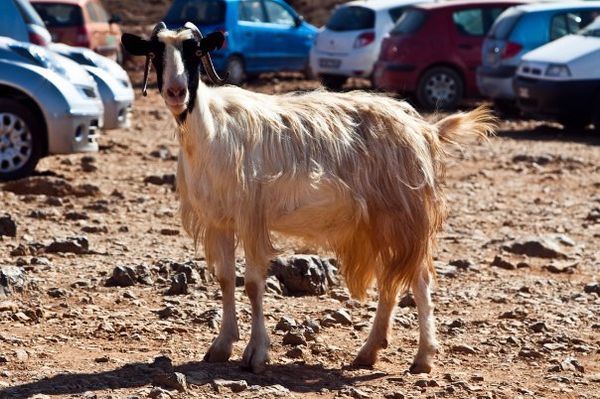 Car in the parking proved that we are not alone there are such idiots. Jeep was not so much. In general, 40 minutes shaking in the uphill finish, the car looks like it is not clear what, all in the dust.
So where bay? It turned out that before she saw another 5 kilometers down the mountain ... In the most sun we went down ... 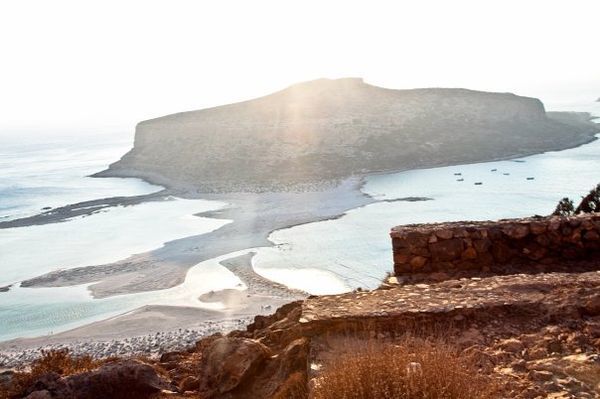 Seeing this beauty glazami- its not a bit sorry that still reached. People have begun to diverge, in the end we stayed there almost one and left at sunset. We returned home at night, it was scary, but then I got used to ... Starry sky overhead, the warm night air and the lovely villages along the way. Night Crete too beautiful! Well, that's 250 miles of road feedback and we are at home. On the second day we decided to go to the island-fortress of Spinalonga in the palm grove, near the beach of Vai. It is a different part of the island ... On reaching the village Ellunda, we bought a ticket on a fishing boat to Spinalonga. 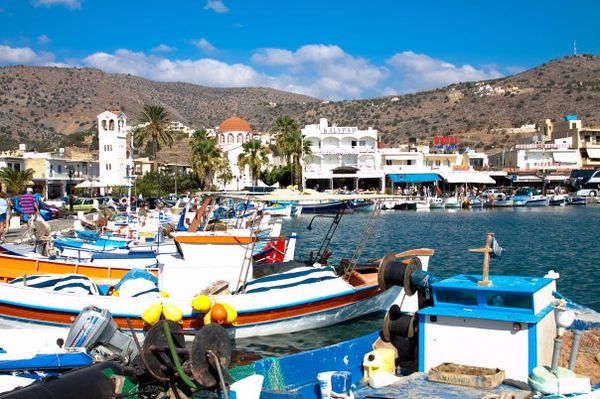 15 minutes and we are on the island. The entire island can walk around for about 15-20 minutes. The island is a Venetian fortress of the 17th century. 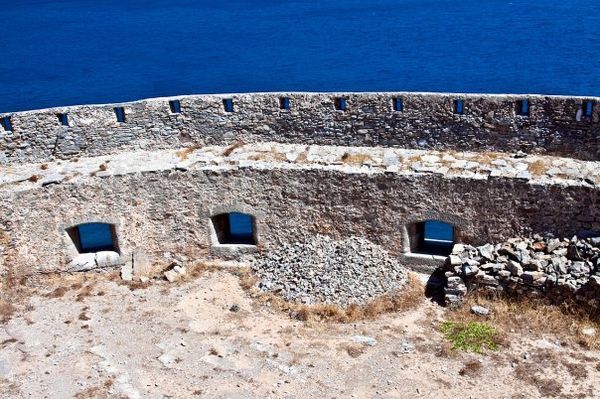 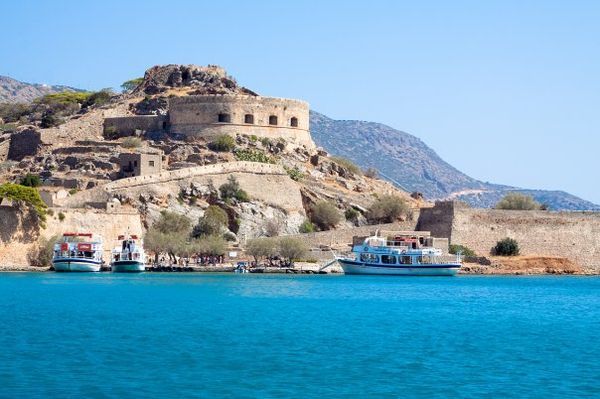 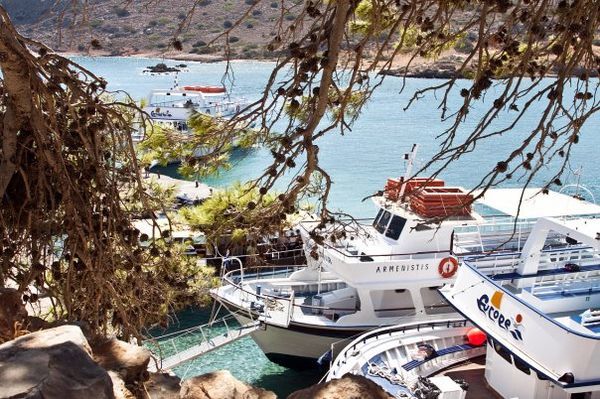 After lunch at a small restaurant on the beach. Inclining his head could be seen as a swimming fish. We fed them all the bread. 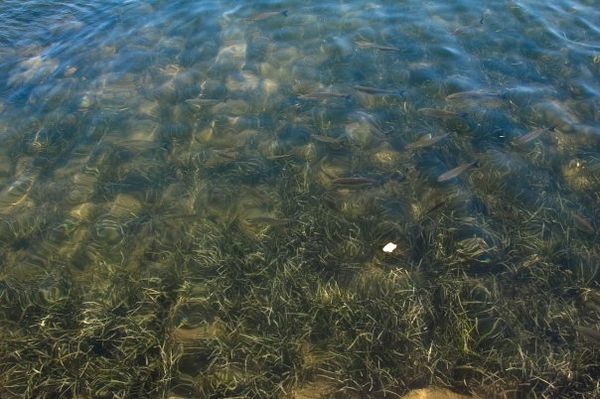 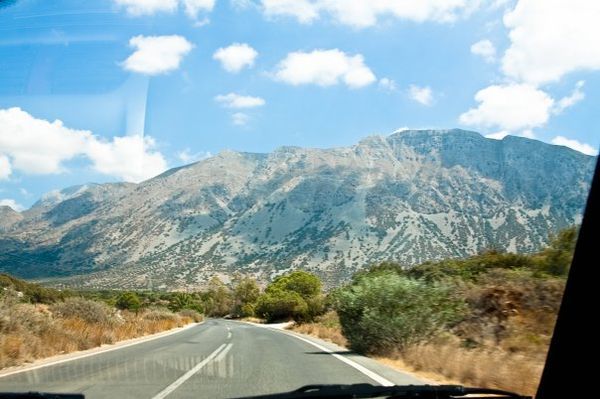 The road was terrible ... but curvier views are stunning! 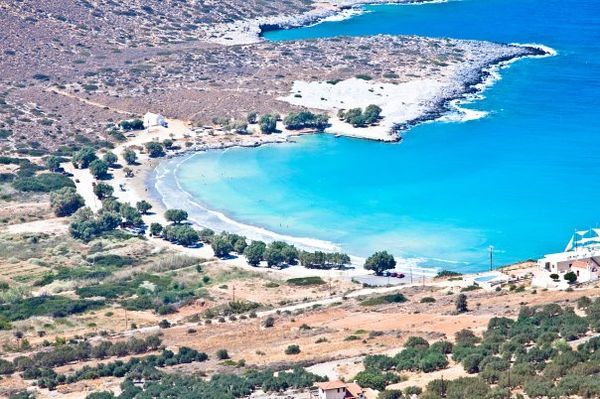 Well, that's palm grove ... lie on the beach for about two hours, we moved back. The third day of our autotravel. Heraklion.
As always, a little downcast before finding the Venetian port of Heraklion. But still found a place to park, where the characters "no parking" was a bunch mashin- we got there.
Venetian Port. 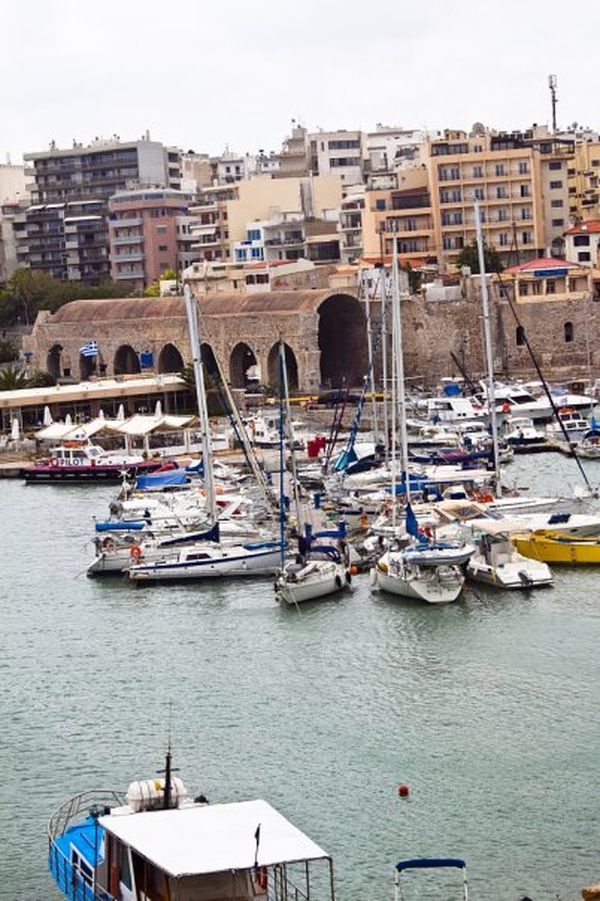 After visiting the castle, we have a little walk in the center of Heraklion, and then had lunch at a cafe on the coast. The remaining time spent in Crete we decided to dedicate a beach holiday and a club that there are countless.
Star Beach-best beach in Hersonissos, where all parties, where all water sports, bars, swimming pools on the beach, music, foam parties, Germans, Dutch, English ... 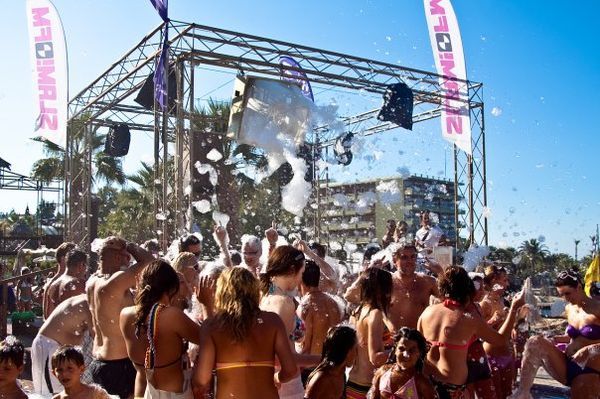 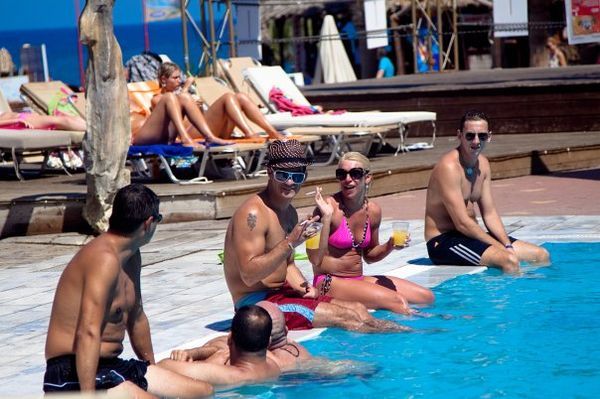 In the end it was a pity to give our tiger. By the way, well that agreed to pay about 150 insurance evro..Mashinu a little scratched, but when I gave back, it did not even inspect! Saying "thank you" and shook hands :) Greece remembered as a friendly and extremely beautiful country. 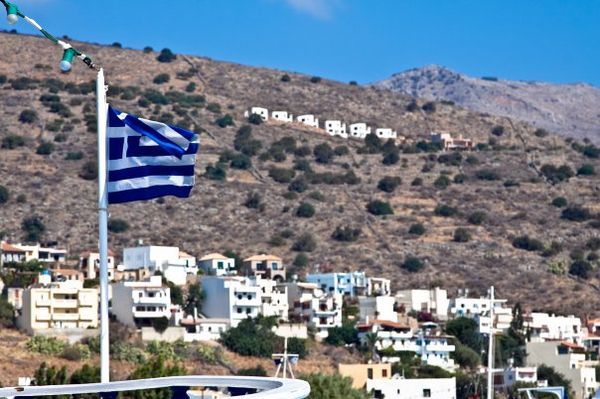