Town Egloffstein in the Franconian Switzerland

About Franconian Switzerland I wrote in his LiveJournal repeatedly. This eco-friendly region, the famous air spas, breweries, small distillery zavodik and Easter wreaths. Egloffshtayn town, which I want to tell you today is not much different from other cities in the region - a cute, vintage, friendly and quiet. Graphs, whose name is a fortress in the city, living in this city for over 800 years! 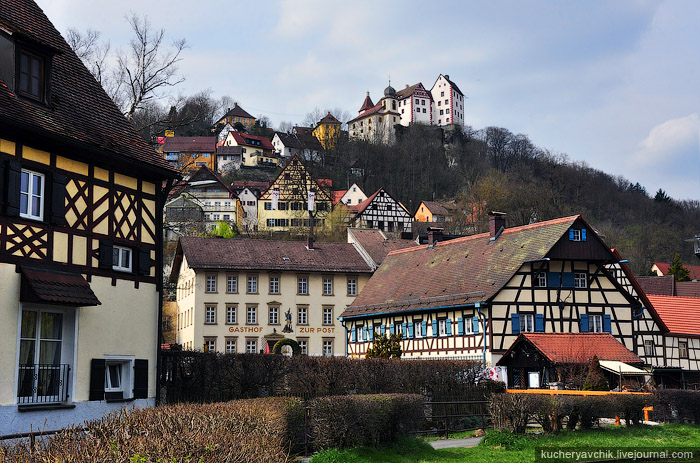 Like most cities in Franconian Switzerland (Fränkische Schweiz), Egloffshtayn (Egloffstein) is located at the foot of the medieval fortress. Total in the region, there are 160 fortresses, most of them inhabited, and some are even open to the public. Through the most interesting castles route passes "Burgstrasse", "fortified road." Legend of origin fortress Egloffshtayn explains the origin of its name, on behalf of the chief princes, Agilolfa. The mention of him and his castle was first mentioned in 1180. In the annals of feudal written in Latin, «Agilulfi lapide». «Lapide» in Latin means the same as the «Stein» German - stone or rock. From the semi-legendary rock Agilolfa trace their ancestry graphs Egloffshtayn the genus of which, incidentally, still exists today. 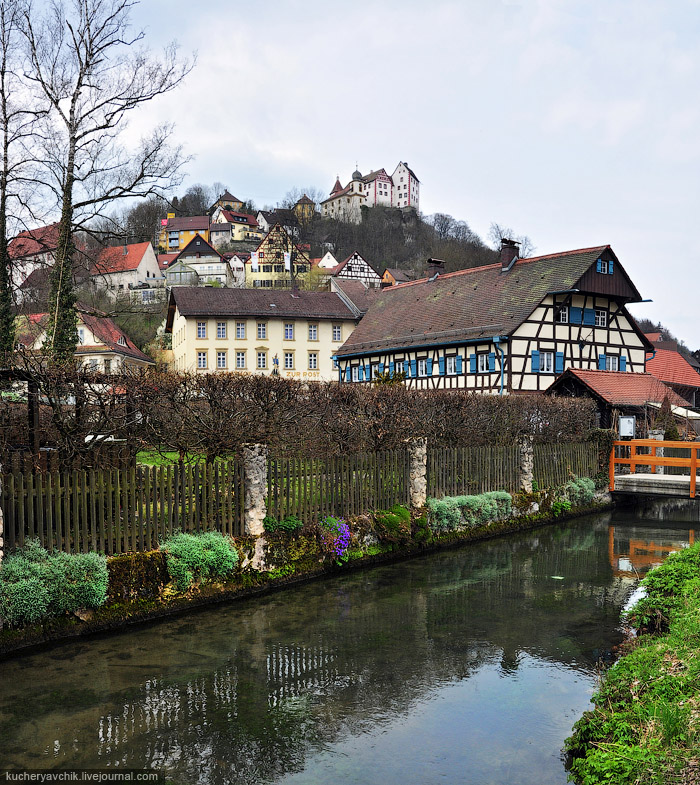 In the waters of the river Trumpets reflected Egloffshtayn.
Without small fortress Egloffshtayn is in the possession counts already 830 years old! Although the fortress from 1506 was formally subordinate to the bishop of Bamberg, and after the accession to the Franconia Bavaria at the beginning of the XIX century - the new royal government, it continued to be the private property of the family, whose members even in the XXI century use their title, von und zu Egloffstein. Due to the fact that the castle is privately owned, to visit and see its interior can not, but you can imagine the example of the fortress Potteshtayn also privately owned but open to the public. About Pottenstein I wrote before last fall. 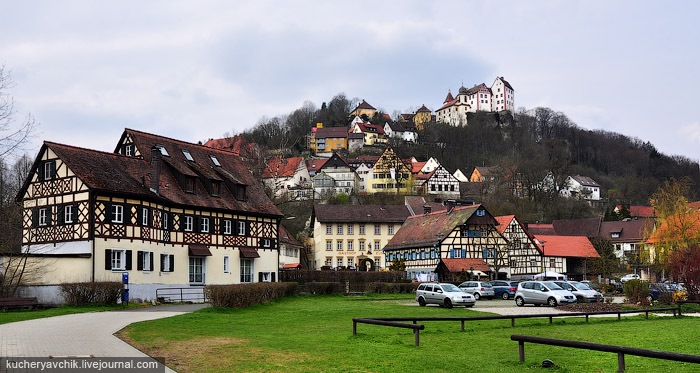 View of the city Egloffshtayn Valley. In the foreground are two old fahverkhauza, which previously housed tanneries and spinning factory. In the late 19th century, a big businessman from Nuremberg bought both buildings and turned them into homes.
Egloffshtayn today produces a very calming, almost tranquilizing impression. It seems as if in this lovely town, hidden between the mountains somewhere in the depths of the Franconian Switzerland, even the river Trumpets (Trubach) flows slowly. However, this impression of calm - the inheritance of the past 65 years of peace. In the past the castle and town Egloffshtayn experienced many tumultuous events which German schoolchildren know from history textbooks. The city was destroyed for the first time in 1525, when the whole of southern Germany Peasants' War was raging. Subsequently, he was twice burned during the Thirty Years' War, dividing, so the fate of the majority of the Franconian town, joined the Reformation. Having dealt with the history of the castle, you can start a leisurely climb up the mountain. 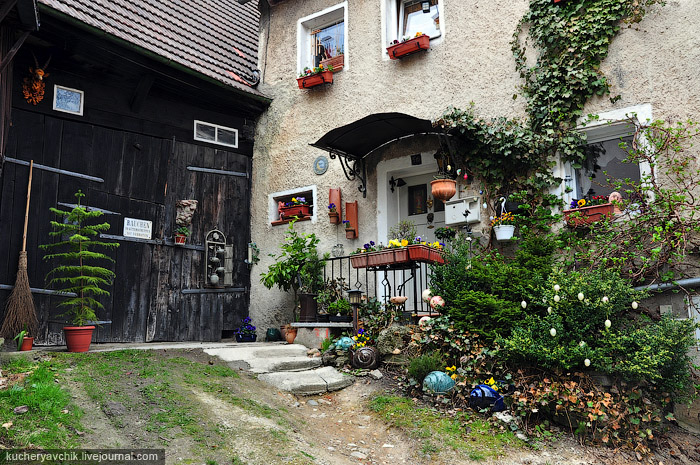 Heavily decorated house somewhere in the city center.
Egloffshtayn in Franconian Switzerland - fairly typical town of the region. You can get here by bus, car or bicycle. Near a bus stop in the old mill is a cafe, a snack in which we can begin to climb the mountain. 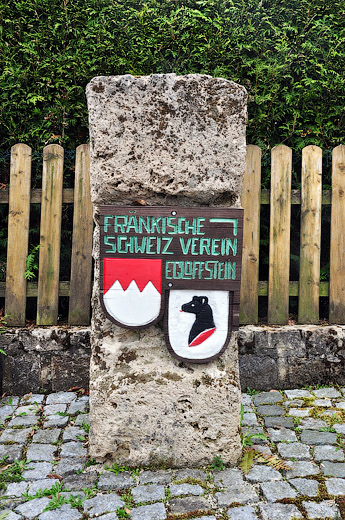 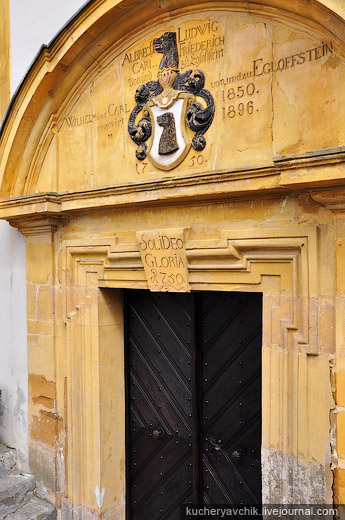 On the left column shows the coat of arms of Franconia (left) and the arms Egloffshtayna. Right - the entrance portal of the church of St. Bartholomew.
To get to the castle itself, it is necessary to make a grueling uphill. Egloffshtayn fortress is situated on the highest point of the mountain. To avoid getting lost, the road to the castle is designated tourist signs. 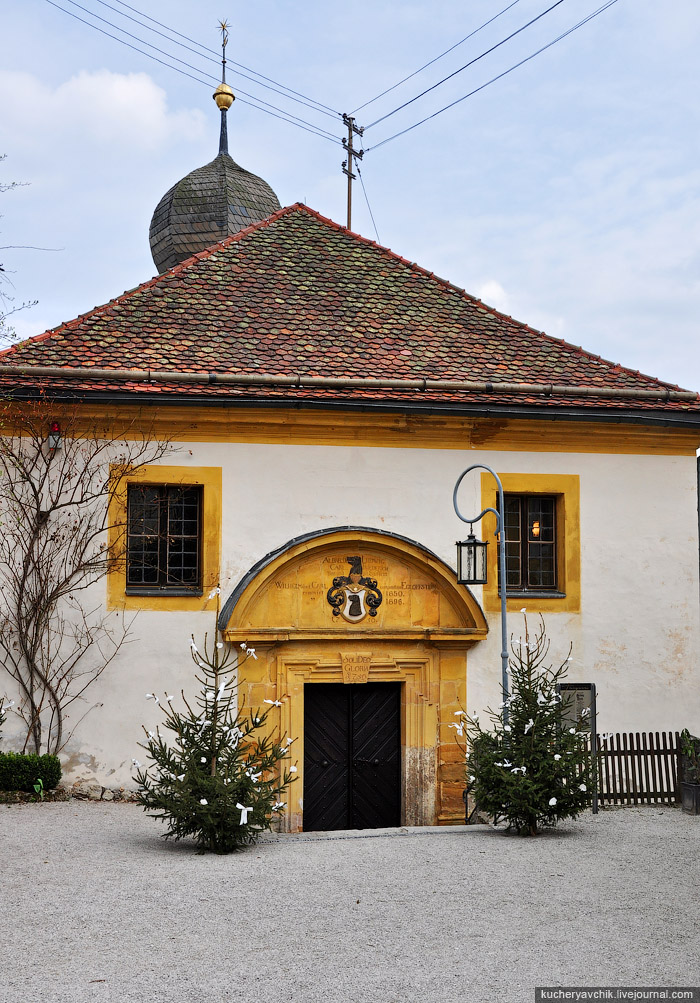 Facade of the church of St. Bartholomew hides a beautiful Baroque interior.
The path to the mountain passes through the center Egloffshtayna. Here we see the first urban bath, both former public house, the town's first restaurant opened on the orders and under the auspices of the graph, the prices and quality of food in which the governed from the castle, the old city well decorated for Easter Easter wreath (Osterbrunnen), and many others simply old houses. 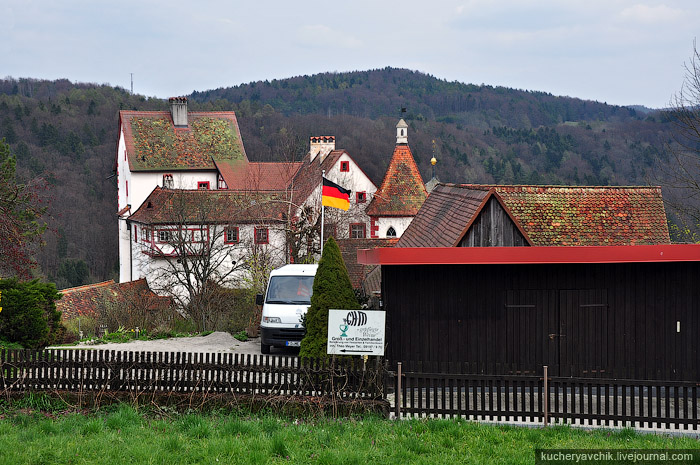 View of the "burg" of the household of the fortress, "Forburga."
Medieval fortress often consisted of two parts - part of a larger business "Forburga» («Vorburg») and a reinforced section, the fortress, "Burg". Both parts are separated by the moat. In peacetime, the economic part used, departing from the fortress, and the war on agriculture except for a small store of provisions in the basement of the castle fell into the hands of the enemy, if, of course, vzibiralis mountain fortress and precipitated. 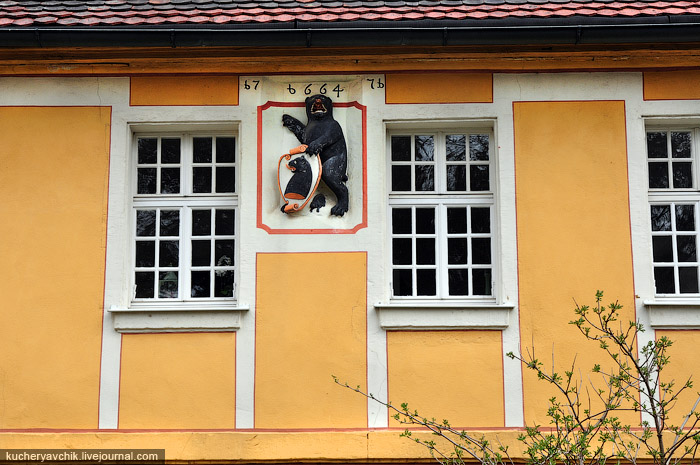 Black bear with his tongue hanging out - a symbol of noble family Egloffshtayn.
In Egloffshtayne in place "Forburga" survived several old barns and City Hall. At the end of the building you can see a wooden figure of a black bear with an elongated tongue - a symbol of sorts Egloffshtayn. This bear has been installed at the Town Hall after struck one of the towers of the castle, under the ruins of which was found the bear-Godzilla. 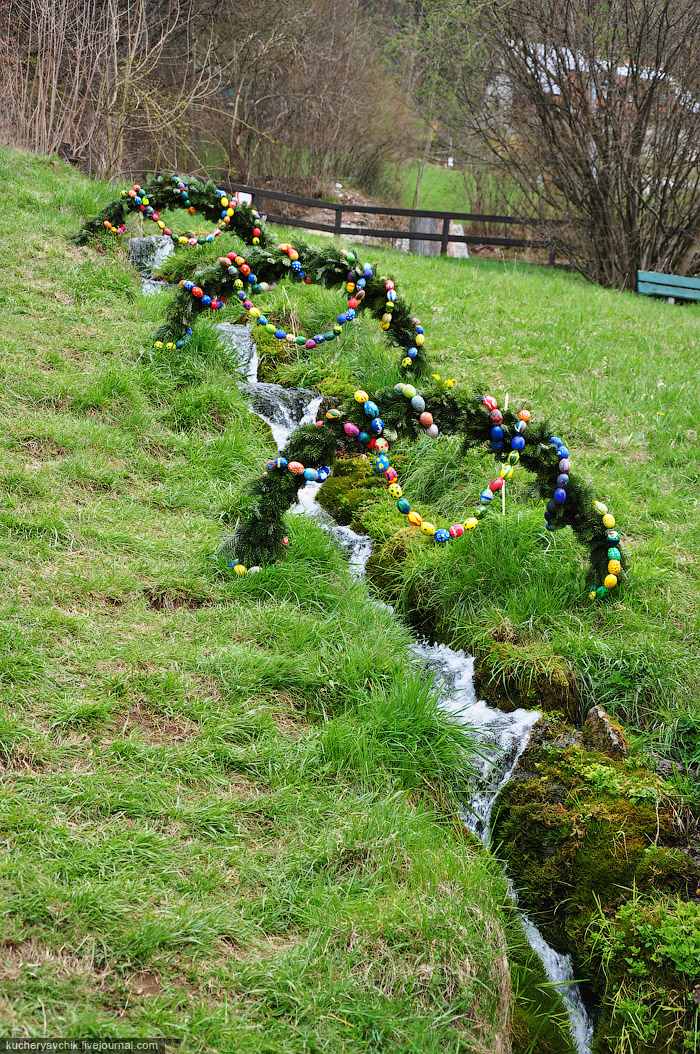 Little Easter wreath (Osterbrunnen) in Egloffshtayne. The tradition of Easter decorations originated in the Franconian Switzerland in the early twentieth century and has since spread throughout Bavaria.
Egloffstein - not just a city. In 1951 he received the status of the market and since then its official name - Markt Egloffstein. And although today this status can boast only official stamp, in the past the status of the market was a decisive factor influencing the city. The first "market" appeared in the Frankish Empire in 805 year. The status of the city-market guaranteed protection of Prince at the time of bidding, as well as the right to hold regular fairs in the city. Weekly markets allow citizens moving away from food production and improved in crafts. Thus arose the medieval city with the right government. In the XXI right to self-government has every city, even the most run-down farm, so the issue of title Egloffshtaynu city market in 1951 was nothing but a landmark event, not vozymevshim the slightest impact on the economic situation in the city. 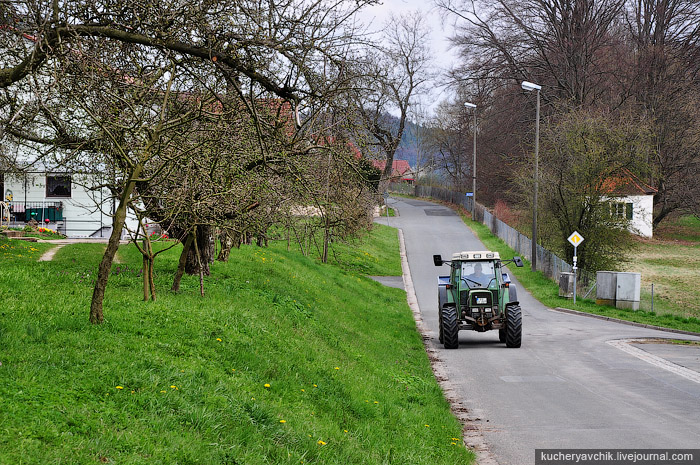 Looking Egloffshtayn, we went on foot to the side rail way station in Pretzfeld (Pretzfeld), going on the way to the zoo Hundskhauptena (Hundshaupten), what I will tell you how some other time. In Franconia there is another city with a very similar name - Eggolsheim ( Eggolsheim). It is located 5 km north of Forchheim and is remarkable in that it was found in the ancient settlement francs in the current Upper Franconia. In the neighboring village of Eggolsheim Buttenheim (Buttenheim) was born in 1829, the future inventor of jeans, Levi Strauss, but that's another story.