In Hamburg, often hosts various interesting activities. One of these is the annual festival Hafengeburtstag, dedicated to the birthday of the port, namely the Hamburg harbor. This year it celebrated its 823 th anniversary of live music, "procession" of swimming facilities that you can imagine, master classes and fishing fair, a small regatta course and the final fireworks. I was only on the "march", but about everything in order. It takes a holiday is usually from 11 to 13 May. At this time, yet is very warm, especially in Hamburg, especially in water. But, nevertheless, the people in the square in front of the port gathered a lot. Everyone wanted to climb higher, to as far as possible to enjoy the panoramic view of the North Sea with a tributary of the Elbe river in it. 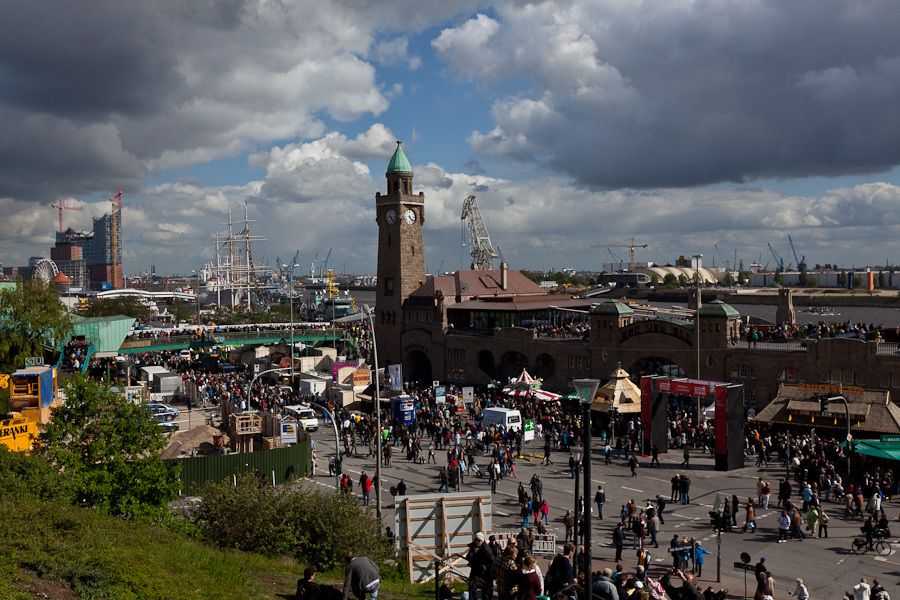 It was nice to be found among white groomed "beauties" Russian neat and tidy "boat" with pacific called "The World."
Beaming with its freshness and novelty, it was moored at the pier, attracting the attention of all passers-by. I could not pass and do not capture this masterpiece, sparkling in the sun. 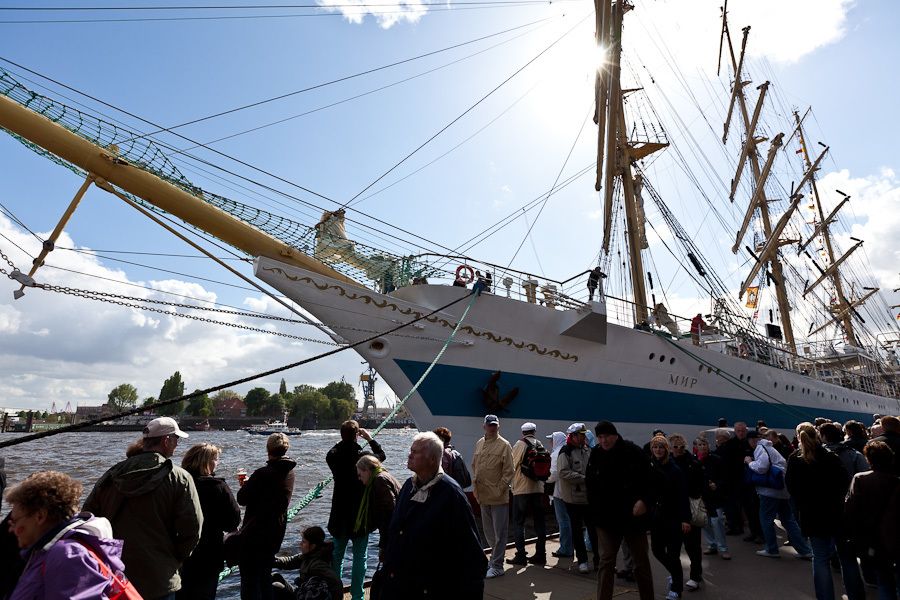 By the waterfront are some interesting passages. They are specially made so broad and dvupolosnymi visitors to the Hamburg harbor and passengers comfortably and without obstacles got to where they need to, without creating pedestrian traffic jams. 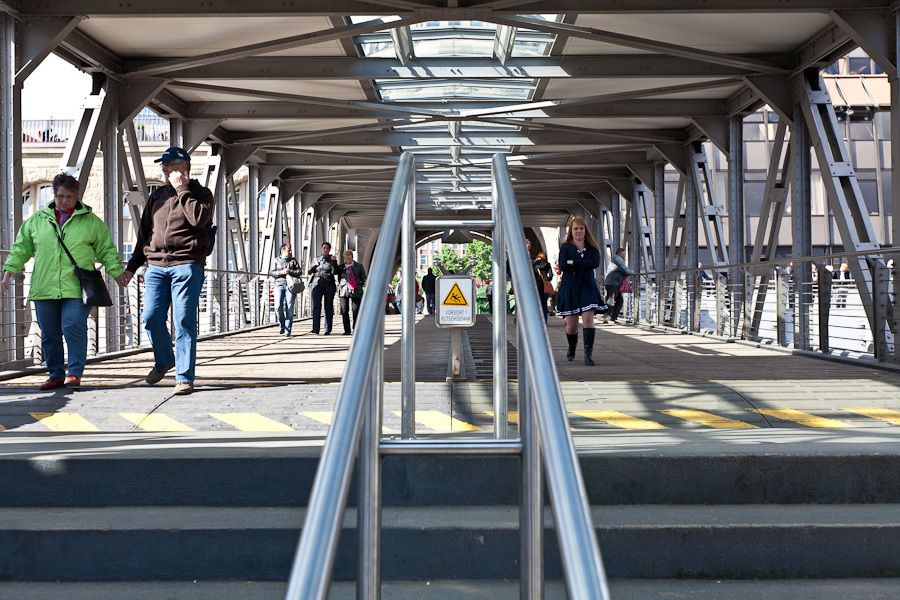 Masts of ships are carried headlong into the sky. Throwing back his head to estimate the height of the mast once, naturally begins to ache neck. Each is made of pure wood, decorated with flags - special characters, I suspect that the nautical theme. And an incredible amount of rope, holding such a machine in a stable position. I can imagine how they look spectacular with their sails. 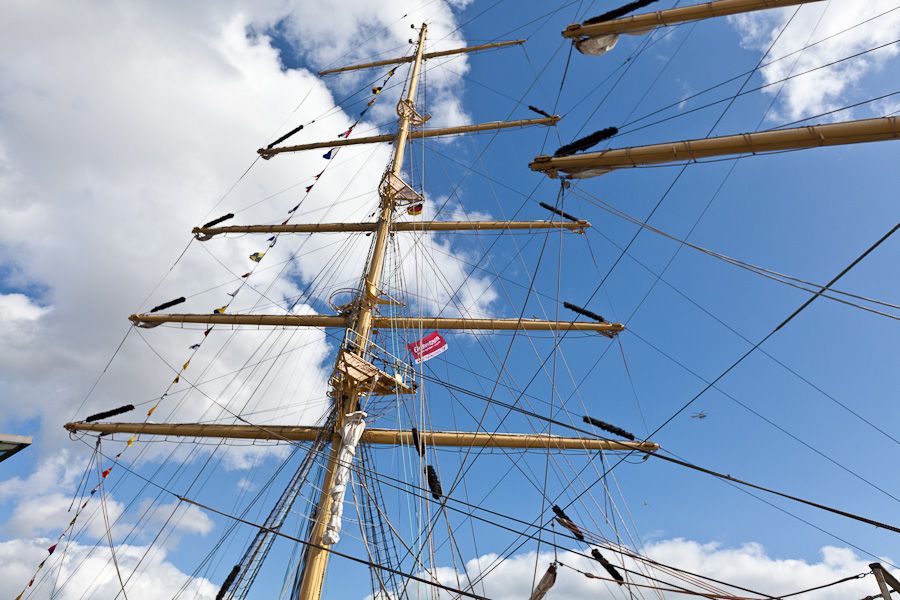 And again the inscription in Russian. Here is the "World" on closer examination. The crew that is not very fun, but in full dress. 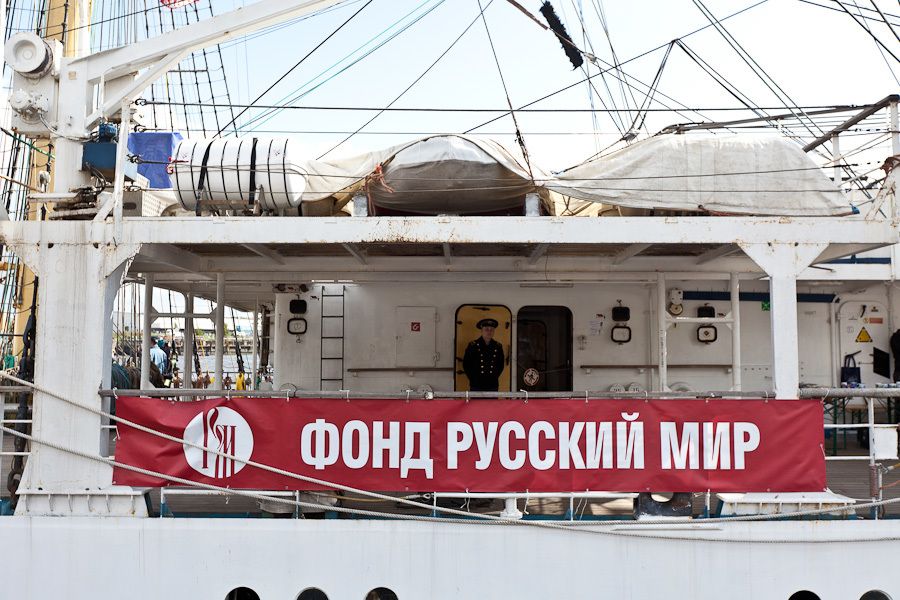 One of the fun of the festival was a demonstration water skiing while eight people attached to one boat. Hold in one hand flag, the second - the handle of the cable, and at the same time managed to go straight without facing neighbors, should be able to. 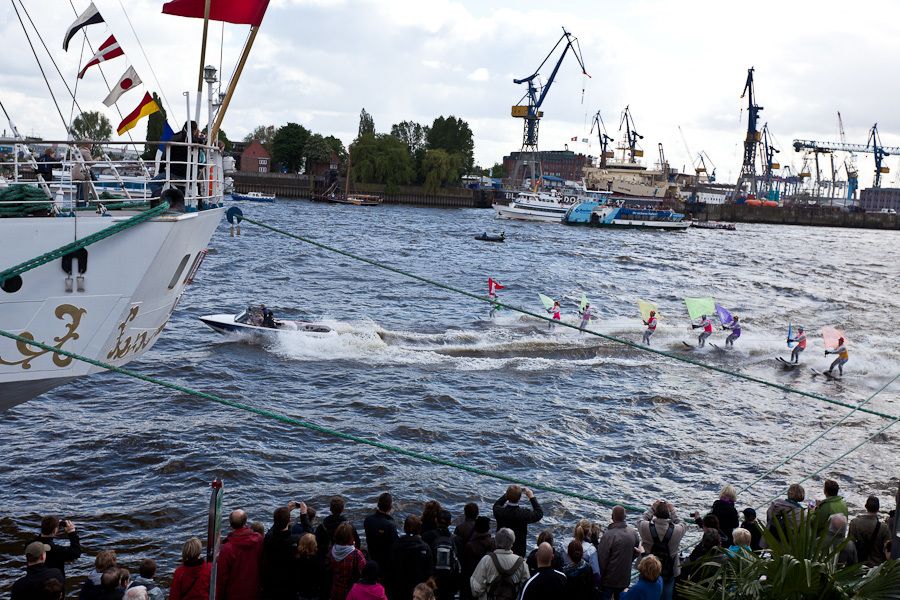 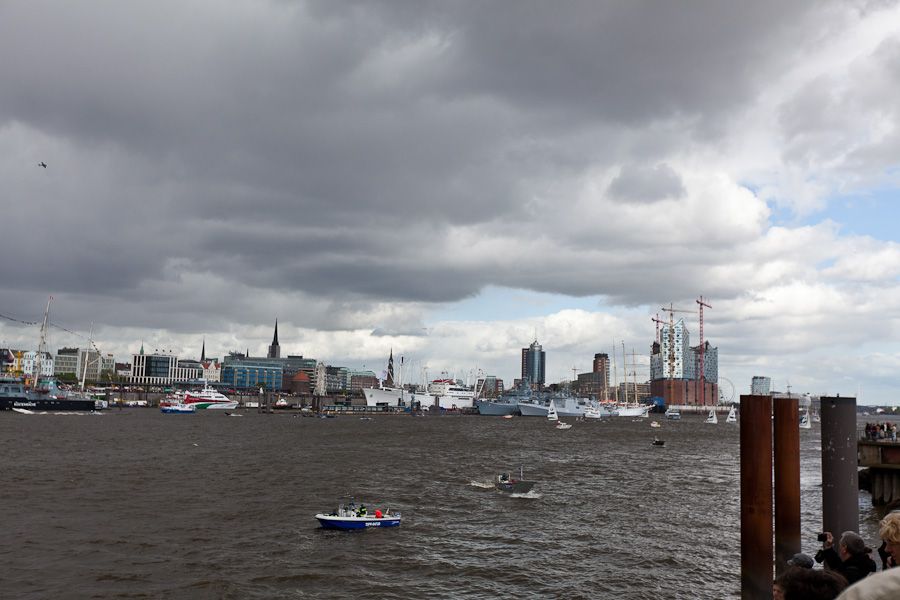 In branch - channel near the pier of a small motor boats are for professional use. Here you and the ambulance and the fire department and the police. All responders in full combat readiness. 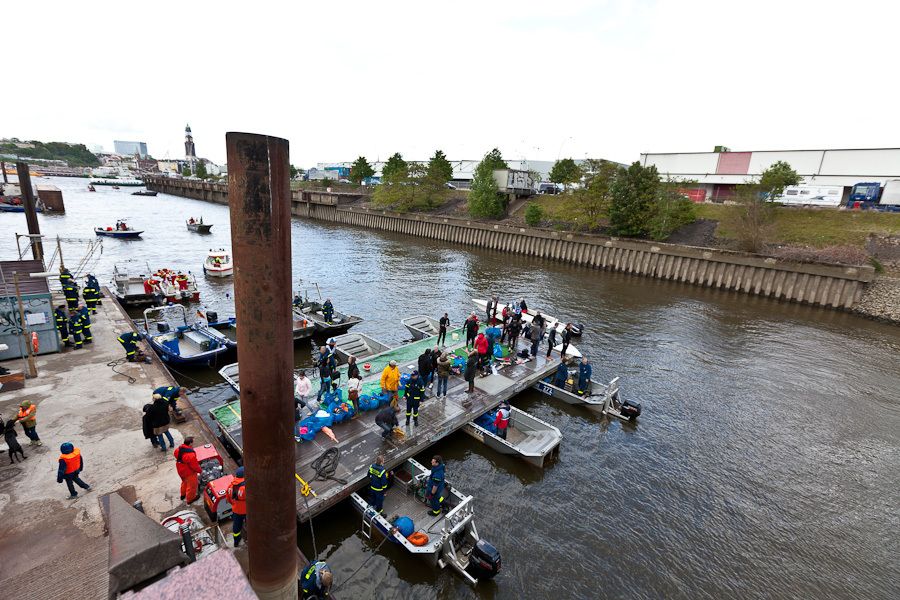 On the other side of the harbor, where there are no buildings, and there is a sandy beach, people are not so much. There are basically those who like a leisurely vacation: leisurely sipping tea from a thermos and savoring homemade sandwiches, enjoy swimming by white sails. Or couples with children, for whom the most, that neither is digging in the sand expanse. Type here perhaps even better than the opposite side. 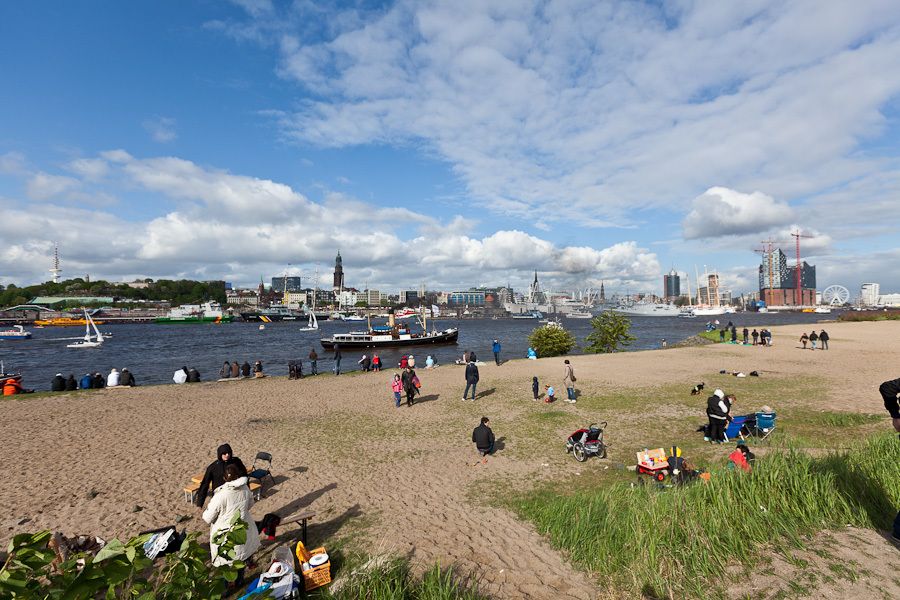 Sailboats, even with lowered sails on a background of modern buildings of the city, it's certainly something. 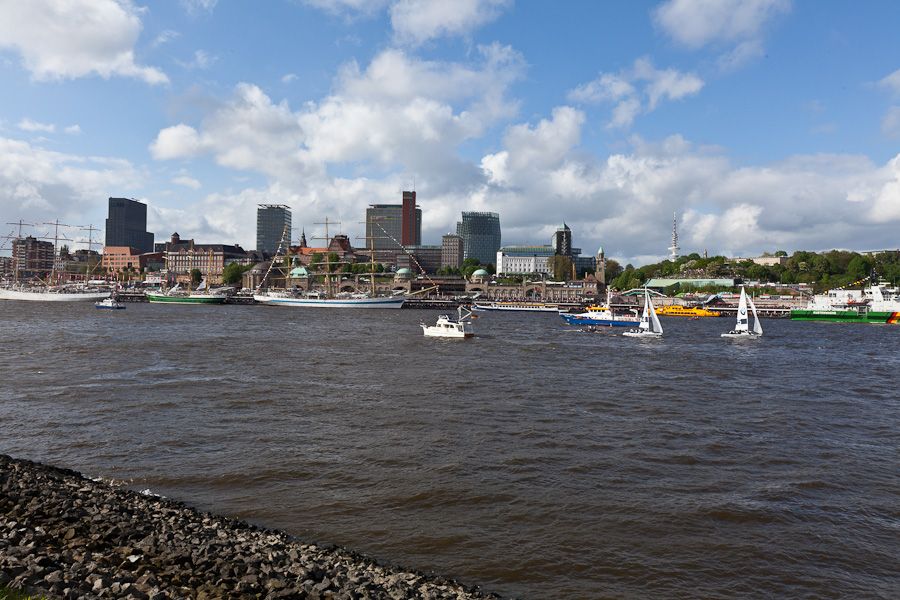 This blue and white beauty, smooth walking on the water, it's hard not to notice. She is very much stands out from the rest of his rig and texture. A feeling that it is made specifically for the parades and celebrations. 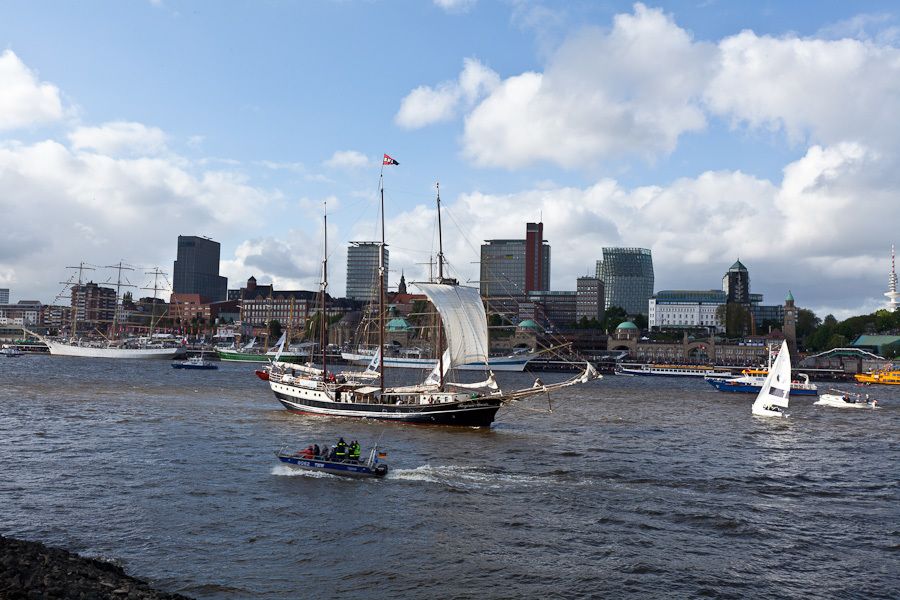 Evaluate how wide the harbor in Hamburg can be by how small human figures are seen on the opposite side. German as "fleet" can be seen far away. Not notice the national flag painted on the sides of ships, it is difficult. 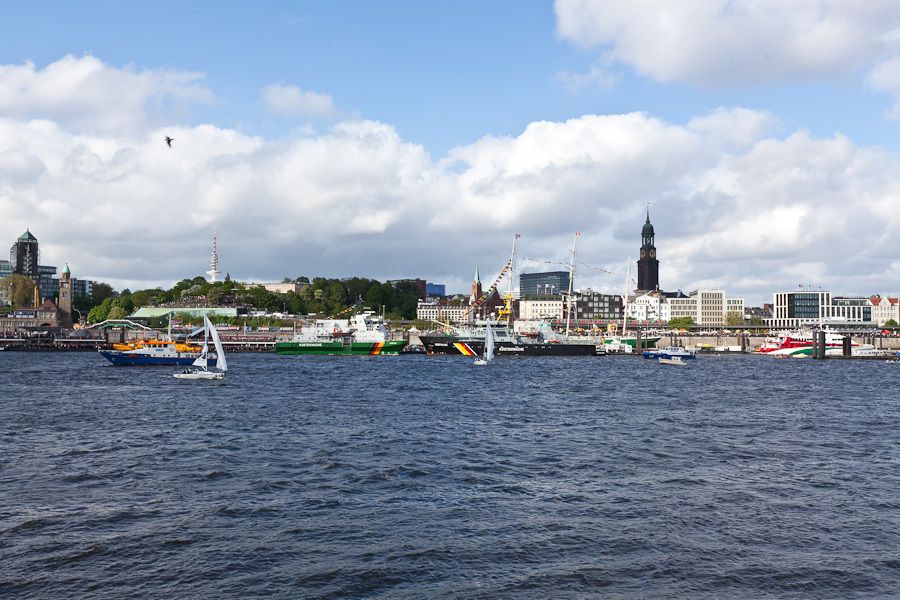 Even an ordinary lift looks happy in his festive red. 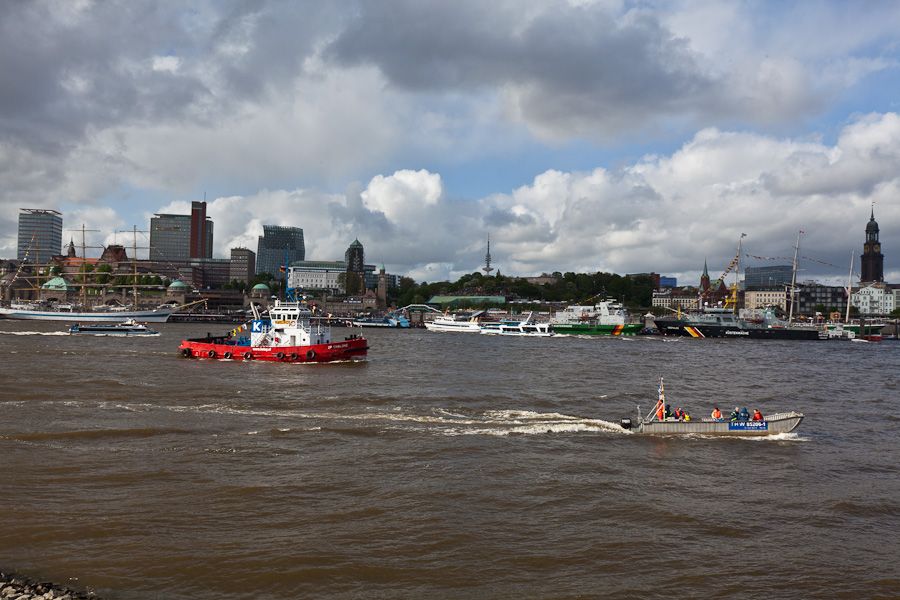 Another small boat with a classic nautical theme. As can be seen, wanting to ride on such a miracle - yachts, pretty much. 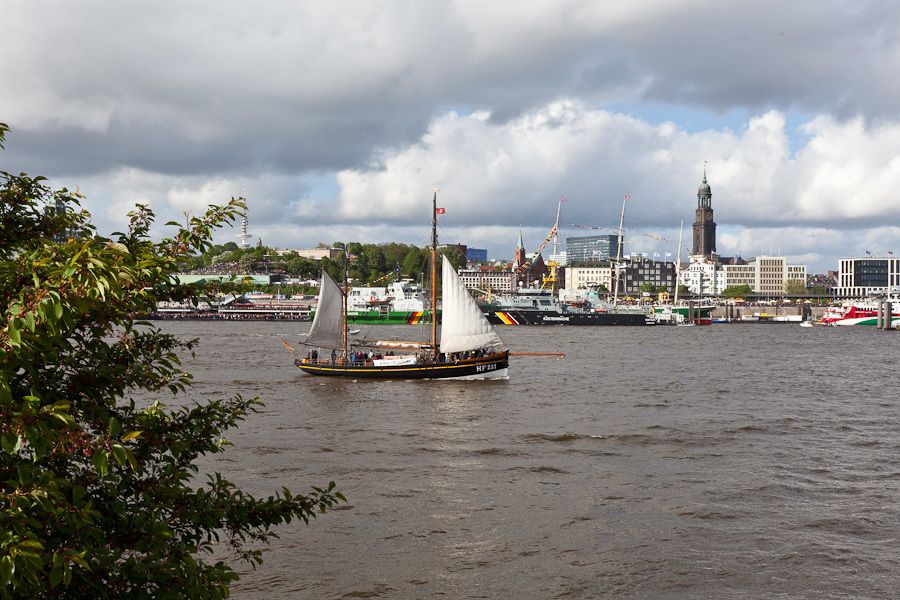 And here is the heavy artillery. Powerful "noses" of such tubs very menacing look on the dark water of the Hamburg harbor. 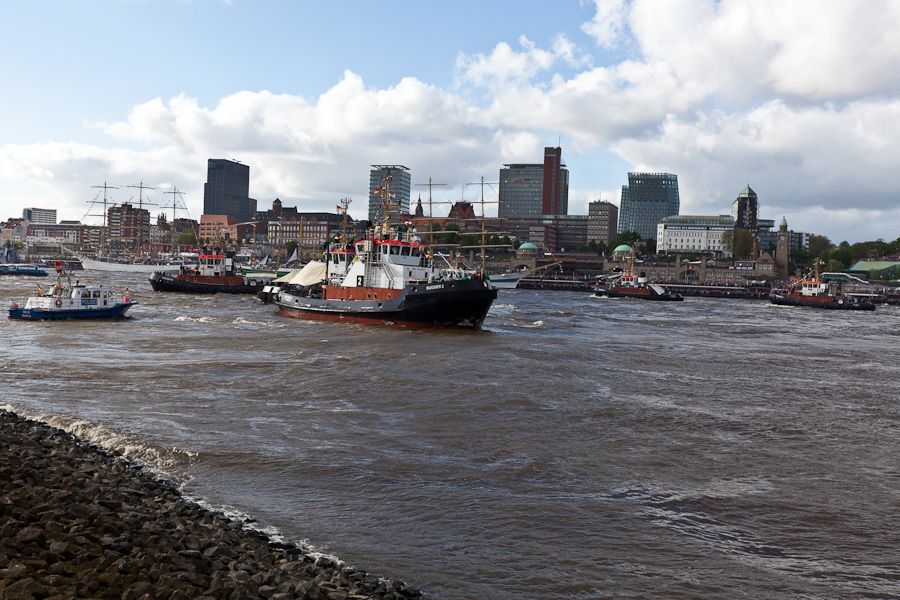 View from a distance is not so terrible and. Yet dark ships adds to their impressive and rigor perfectly inscribing their silhouettes in the city. 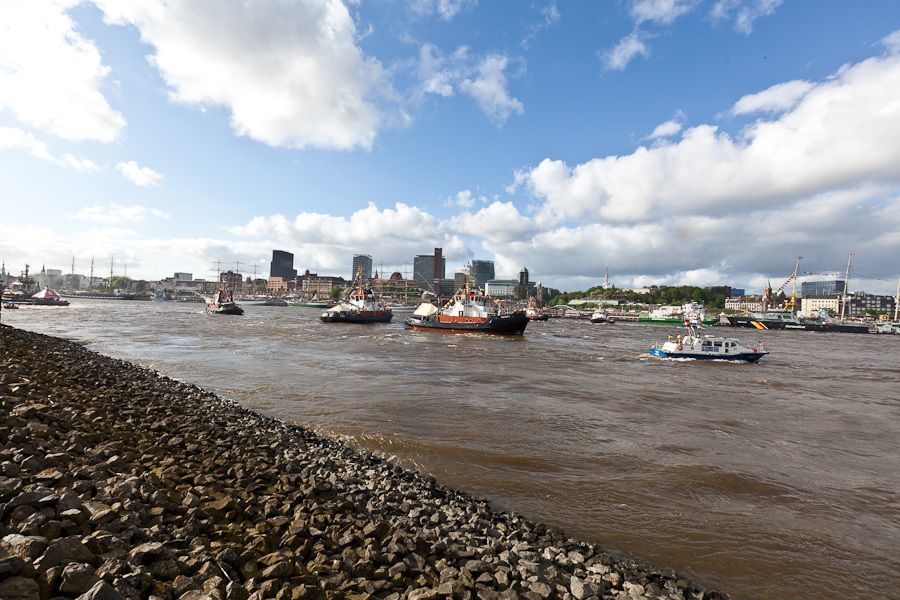 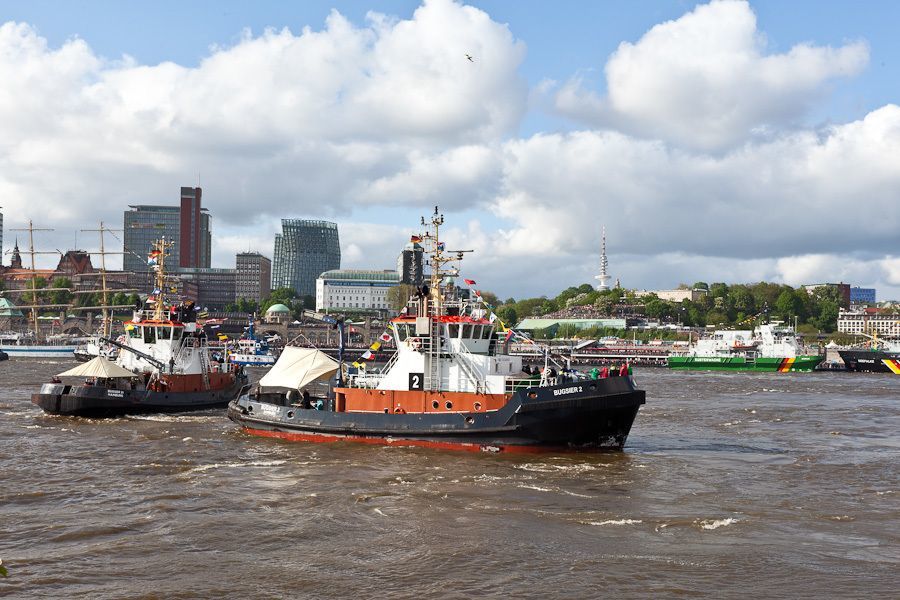 It turns out a small boat in white - blue tones that continuously cruised round - trip belongs police. Constant attribute of any executive authorities of the country of course the national flag. 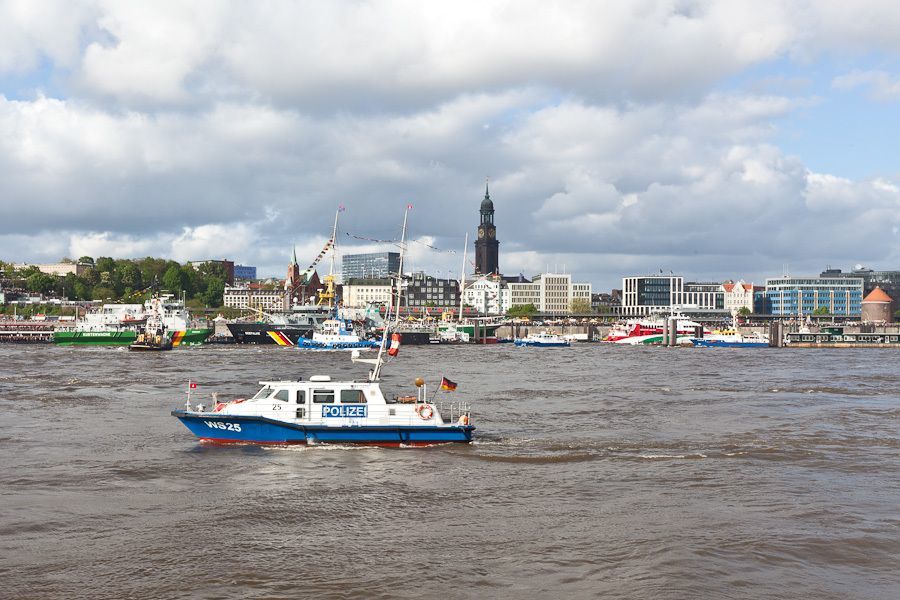 No matter what month of May, the people of Kuta in warm jackets and suits hoods to as comfortable as possible and enjoy a longer marine equipment. 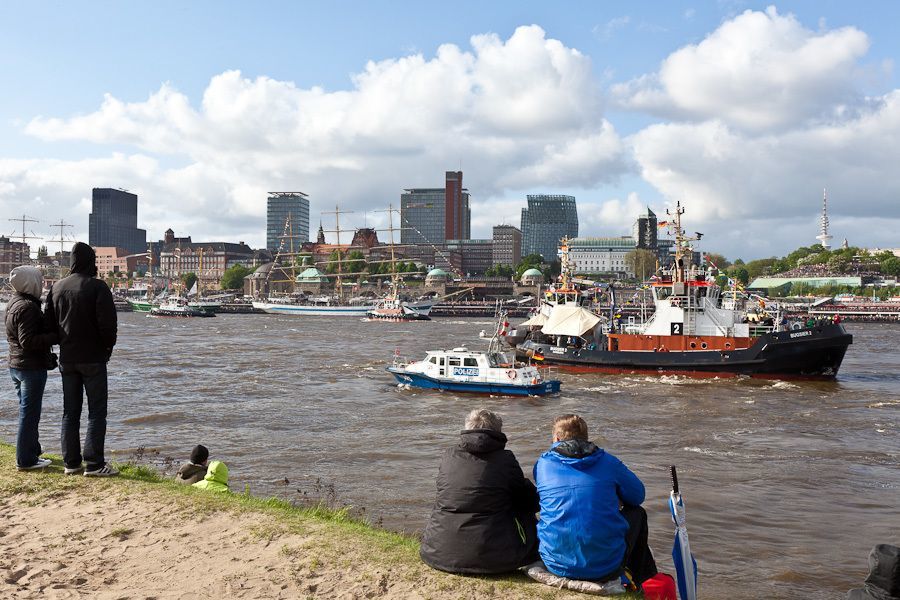 We can say that here is a real traffic: four serious tug, escorted by police and fire boats, deployed on a small area of ​​the harbor to further continue the parade. 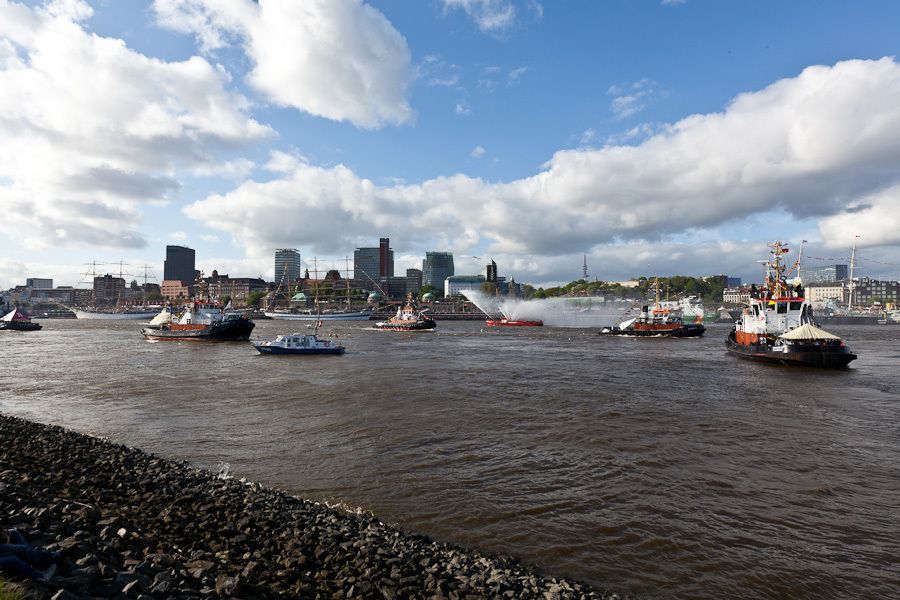 Look at the noses of these warships, each of which is proud that he is present at the festival Hafengeburtstag. Ship looks as if it had just gone into the water. Even black submarine, which is difficult to notice the first time, the new looks perfect. 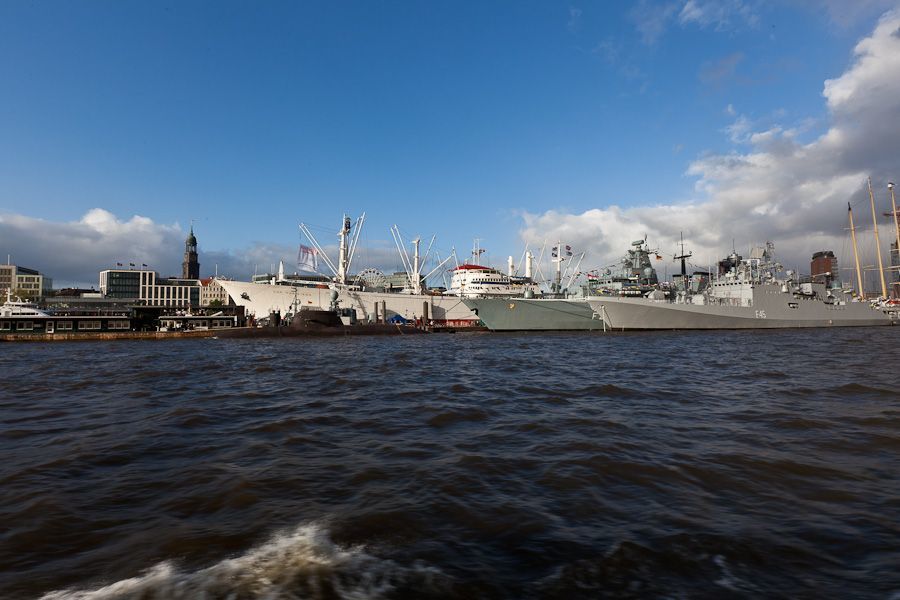 German handsome in a purely national marks, looks like a shark among the simple decorative fish. 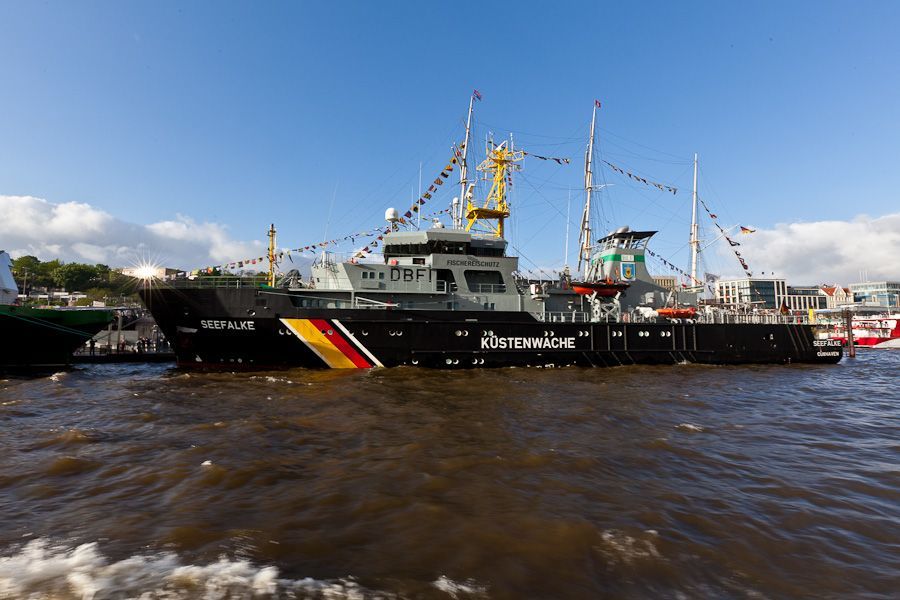 Another "German" in shades of green with the flag of Germany on board. 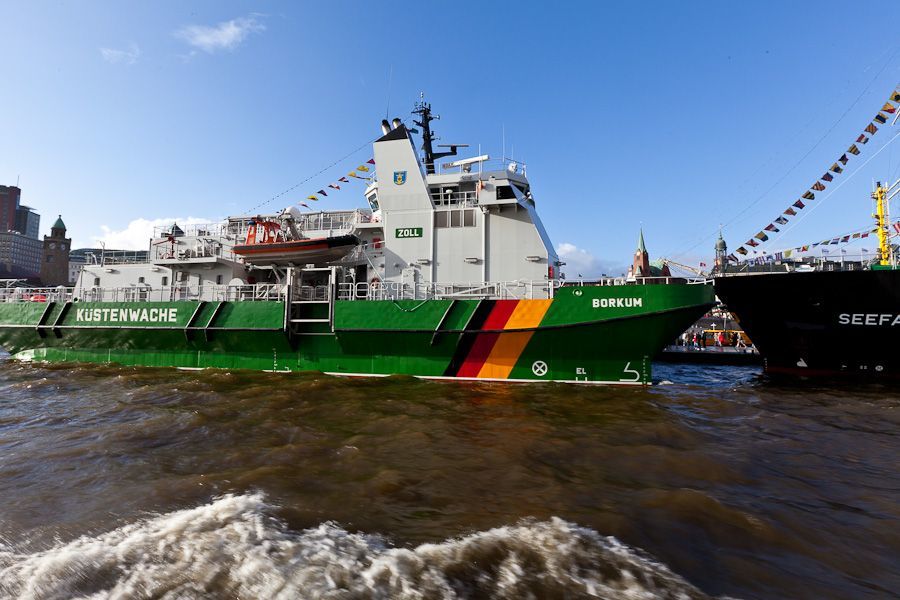 People, as you can see, there were many. No one push, shouting bad voice, did not try to take a seat in the front row. Someone walking along the first tier, someone was sitting at the tables on the second floor. 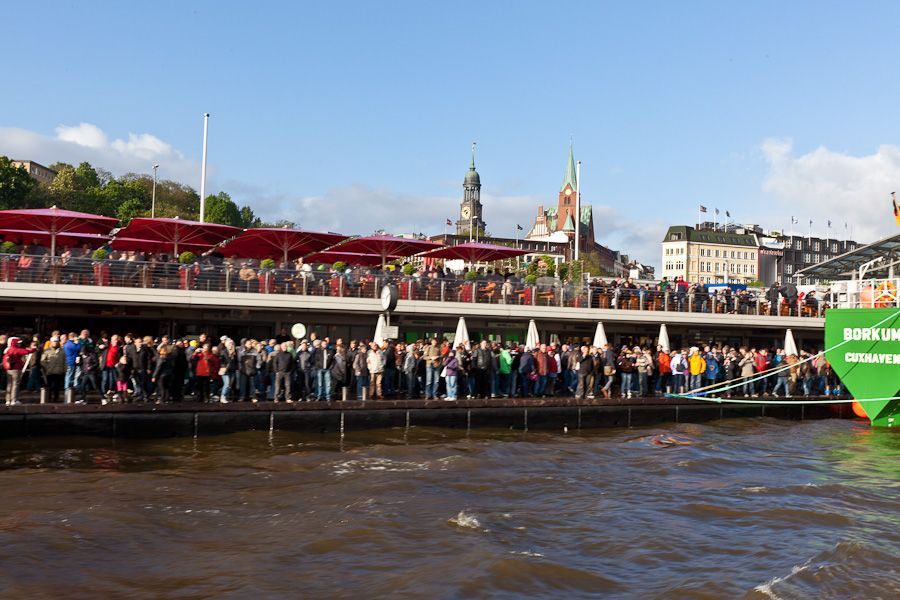 The nose is very high and a large ship around the Port of Hamburg. Only you can look at it for about an hour with his mouth open, looking at every detail. 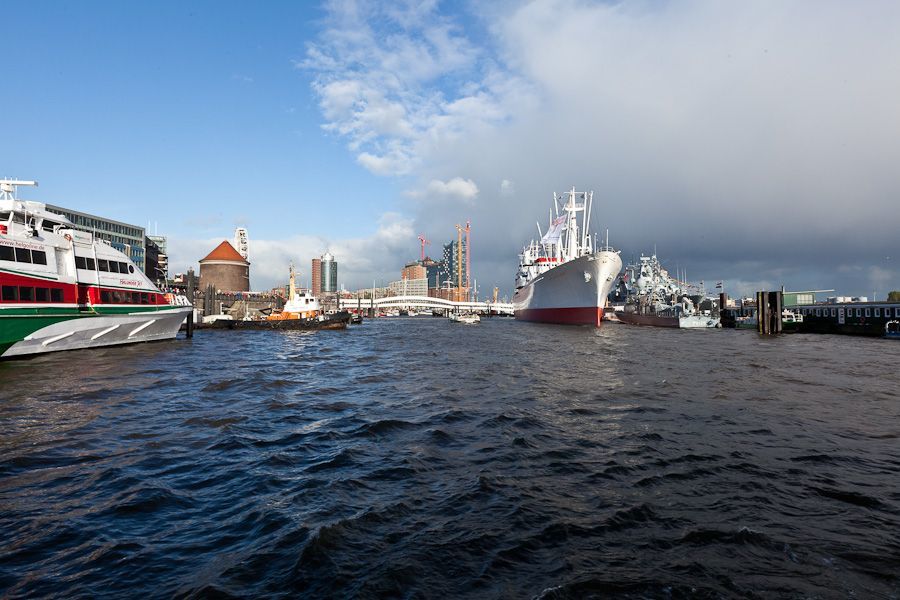 Colorful boat on the left looks like a huge pleasure boat in 3 floors. Now though it is empty, but this can fit over a hundred passengers. 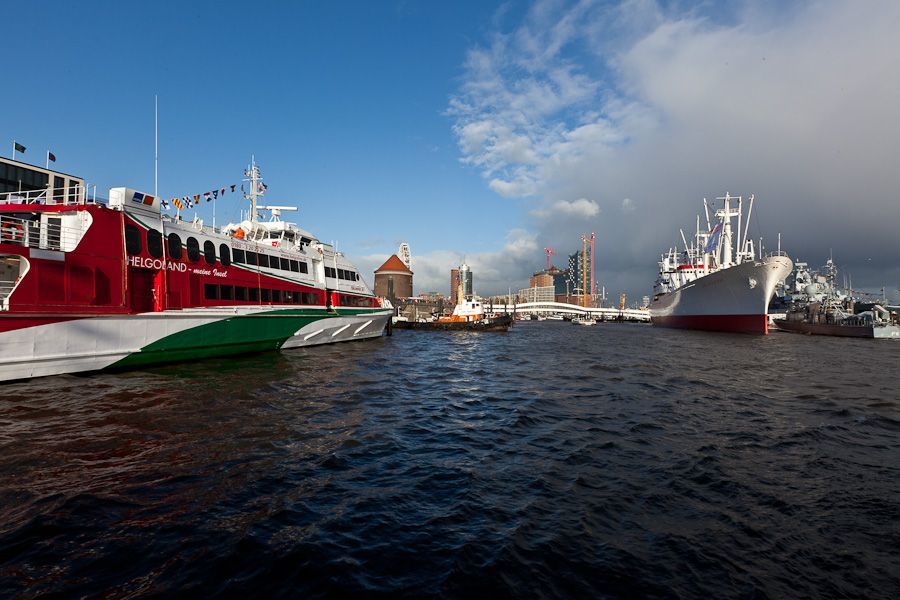 Walking in the harbor all day was very tiring. Admire the ships, studying every detail, take pictures and admire you can certainly long, but still windy and cool weather not contribute to this. Froze completely, I went into a cozy place, and not waiting for the presentation of the new AIDA, which was to be held in the evening. 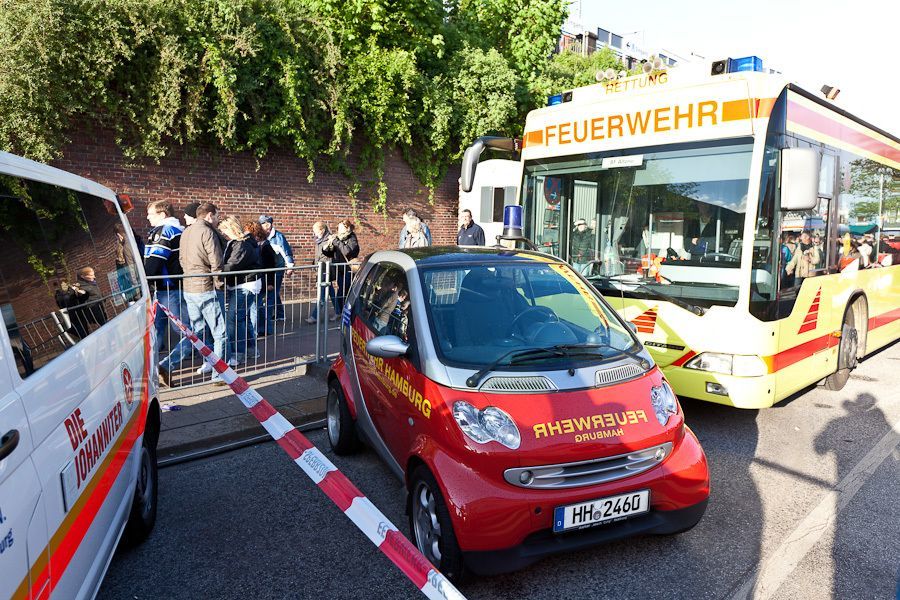