At the far borderlands

This time again there will be a lot of medieval and fortress walls, and again will not do without the Guinness Book of Records. The fact that not so long ago we reached located about a hundred kilometers from Munich's Bavarian town of Burghausen - places like the eye-pleasing and interesting from a historical point of view. There is a castle with a thousand-year history, which is also entered in that same Book of Records as the longest castle in the world. 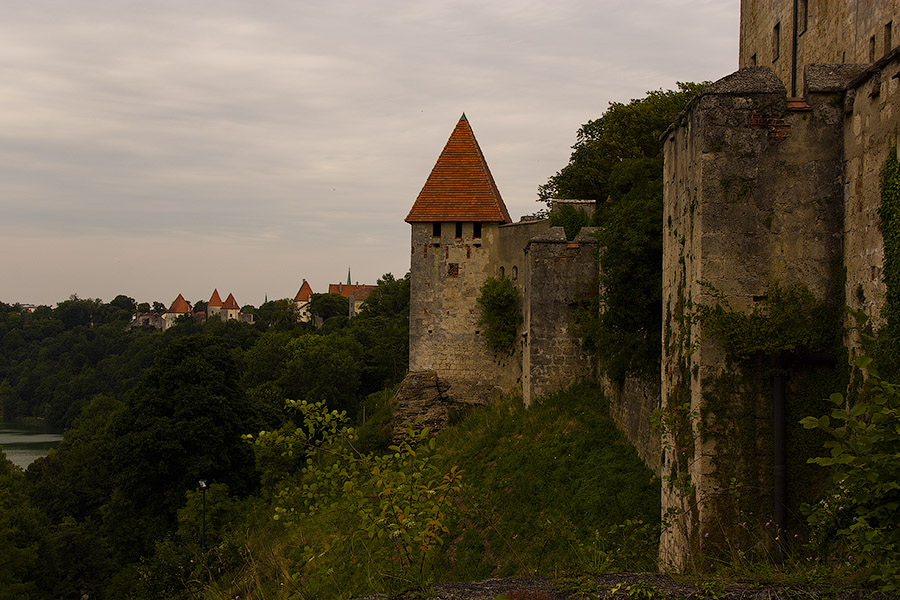 The length of it, according to official figures of 1051 meter. And here we have in mind is not the length of the city walls (which is the sum of a lot more), and most complex, located on a long hill at a height of about 60 meters above the old historic part of the city. The oldest surviving written record of the fortress dates back to Burghausen already 1025 year. But even before its construction people lived here. Archaeological excavations at the site revealed that the settlement existed here even in the 16th century BC. We managed to live here and the Celts and the Romans. It is believed that this area was inhabited almost continuously from the Bronze Age to the present time. This here is a popular place. 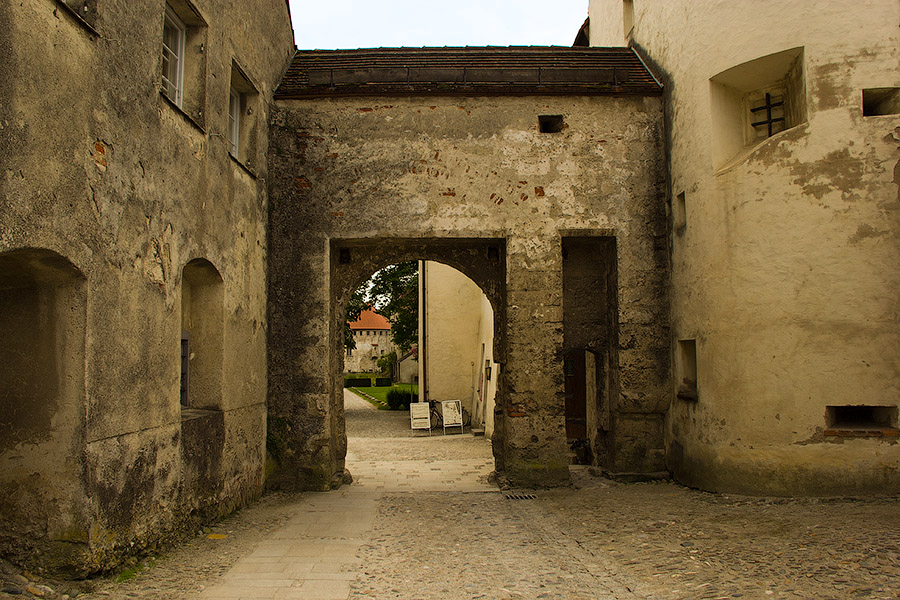 The last thousand years (the first mention of the fortress) is hardly a dull time in Europe. Redivision of the territory, the war for all kinds of inheritance, clashes between different levels of the feudal lords, the invasion of visitors from Asia - all this led to an increase in importance as a military facility in Burghausen, for his constant completion, expansion and consolidation. 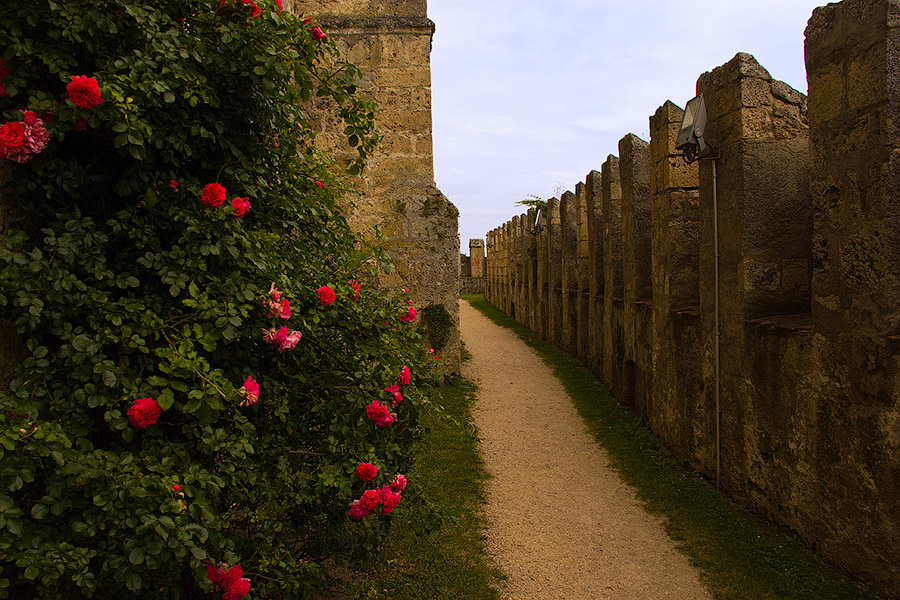 Initially, the owner of the fortress was Count Burghausen race, and in the second half of the 12th century, after the death of the last count, it became the property of the Wittelsbach. In Bavaria, at all difficult to find any historic structure, which does not belong to ever Wittelsbach. 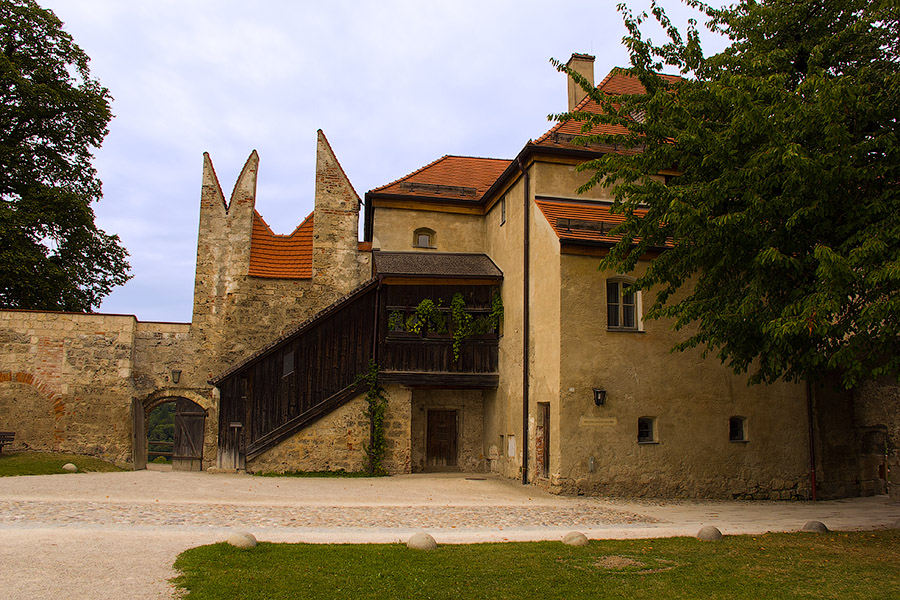 It is believed that the shape, close to the modern fortress acquired at the intersection of 15 th and 16 th centuries, when it is actively expanding and rebuilding, not only as a military facility, but also as a ducal residence. 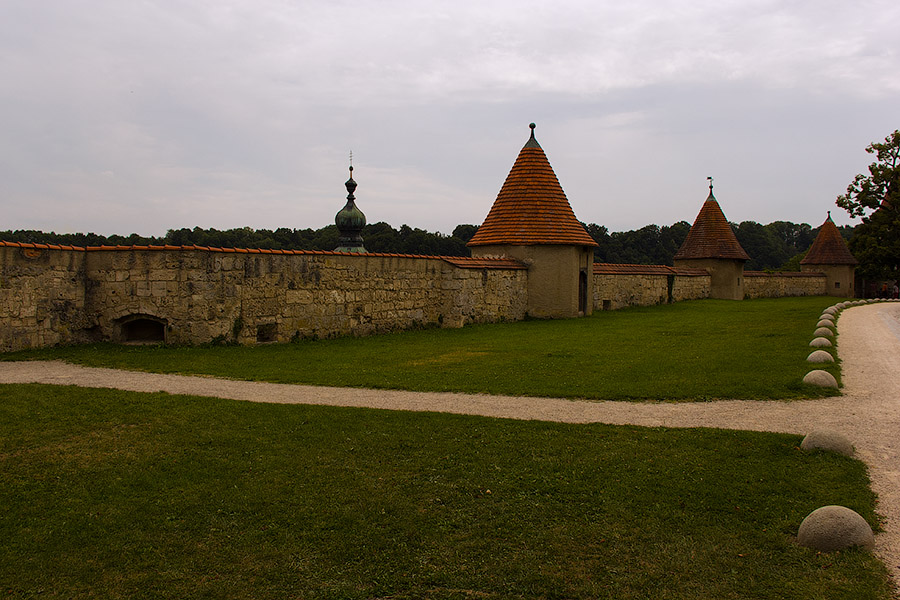 Most of the structures built of stone with the beautiful name of travertine, which gives them their characteristic yellow color. The same stone was used in the construction, such as the Roman Colosseum. 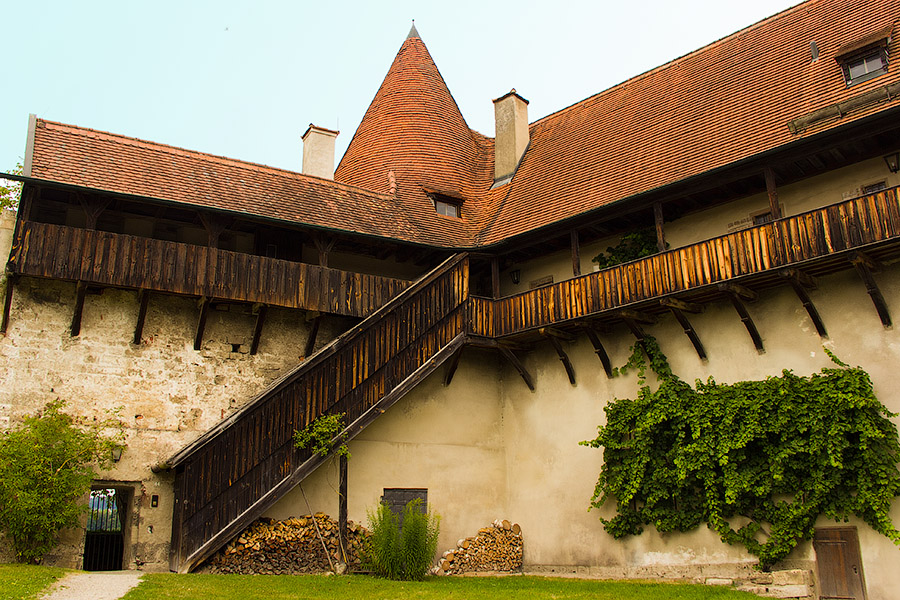 From the tourist point of view of Burghausen castle - a great place to visit. Access to the free. Six large inner courtyard, built in the kilometer chain to a leisurely stroll with very scenic views.
We are in Burghausen not the first time, but this had to happen only in the winter. Although winter is also very pretty, but the summer medieval produces still more impressive. 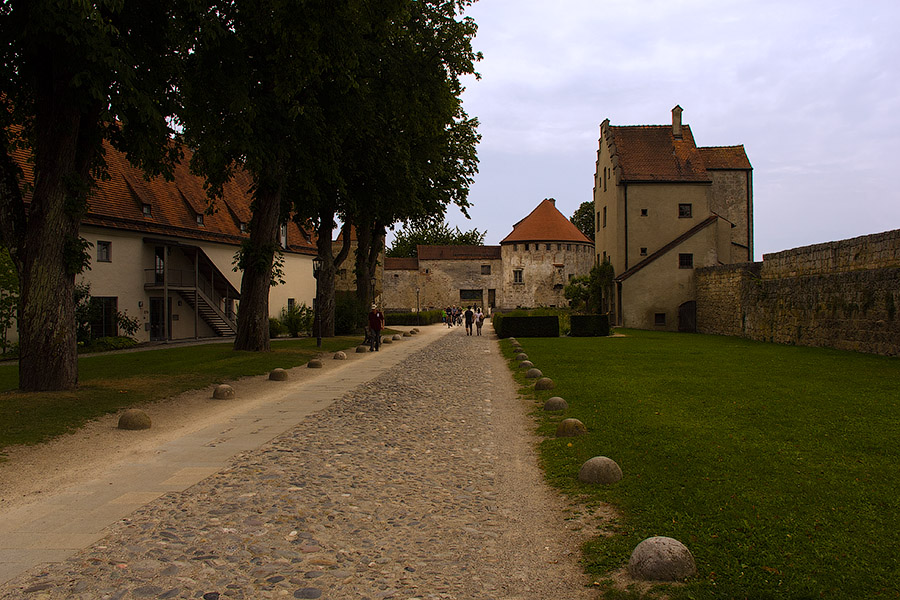 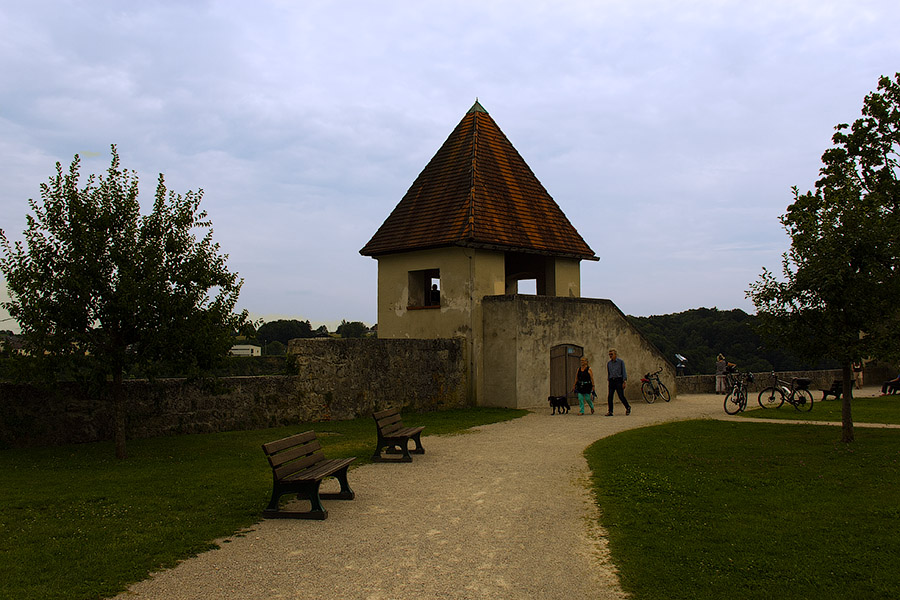 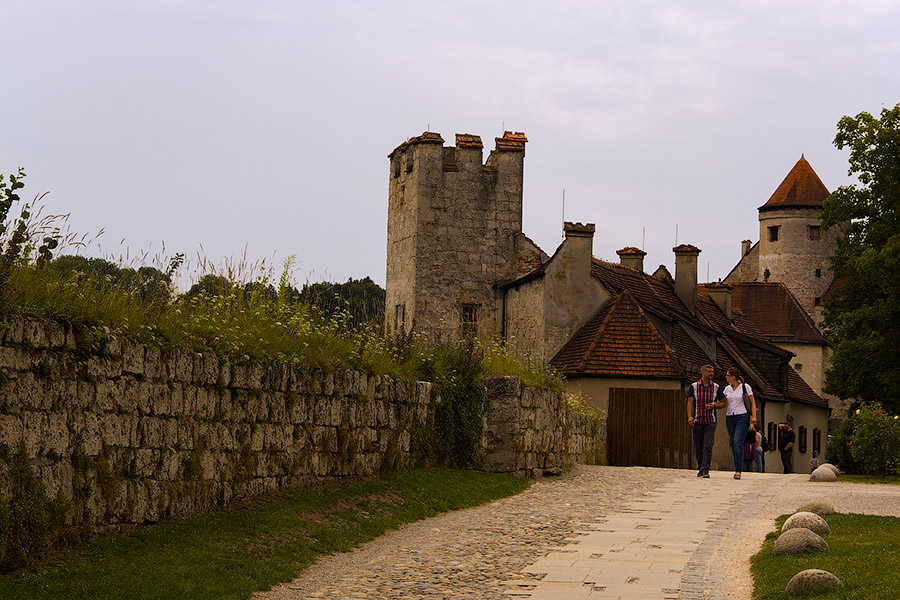 The territory of the fortress inhabited. In the sense that here, among the centuries-old walls have quite a residential apartment, and they are people, and the roads sometimes even drive cars that slightly spoils the medieval surroundings.
Until recently, right here in the fortress, located the Academy for Training of actors and theater and film director. Well, that, quite inspiring place. 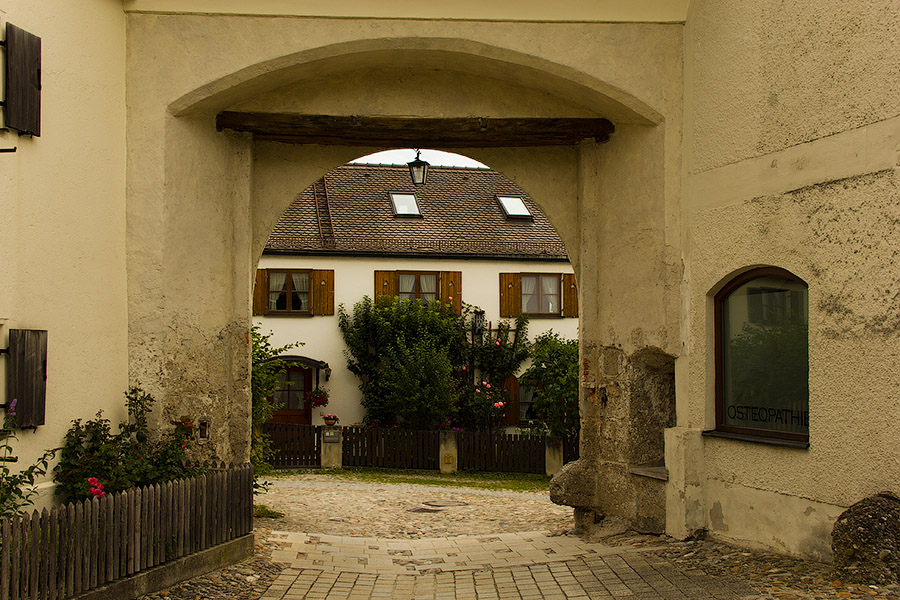 Historically, the castle expanded gradually constructing additions, from the first to the sixth court. The main entrance to the territory is now in the youngest part, and moving from the sixth to the first courtyard, more plunge deep into history. At first it looks like a peaceful little pastoral and decorative. 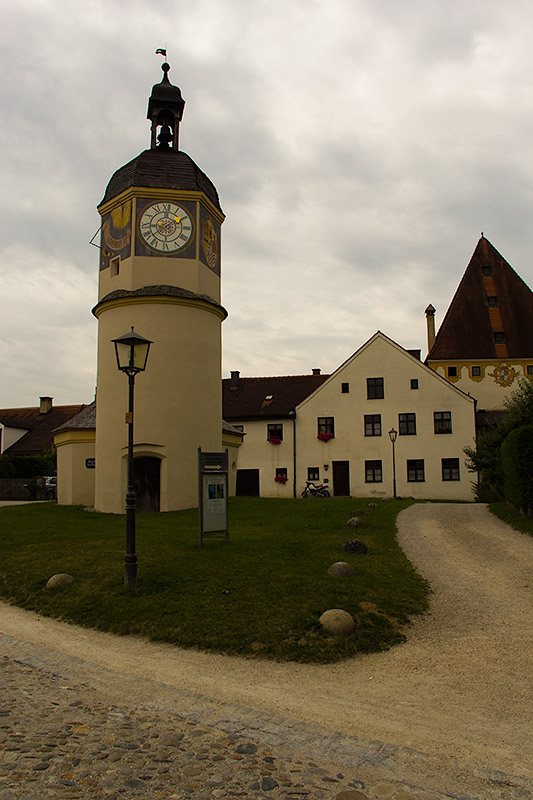 Clock Tower, a 16th-century courtyard in the sixth.

But beyond environment is becoming more brutal and harsh.
To get to the south, the oldest part of the fortress - Hauptburg (main fortress) - you need to cross the bridge over the moat ... 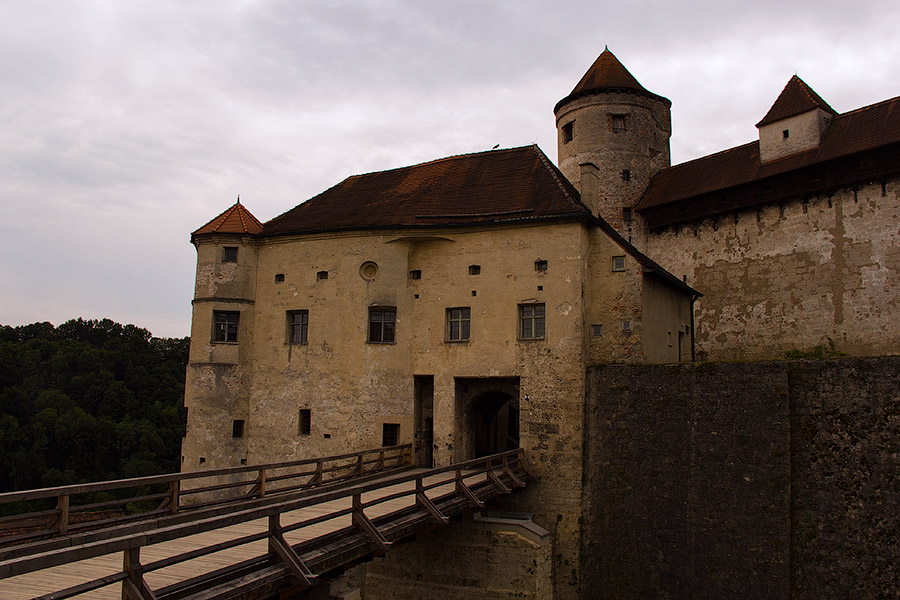 ... And you find yourself in a prison cell, concentrated in the Middle Ages. (Well, if you do not pay attention to the tourists). 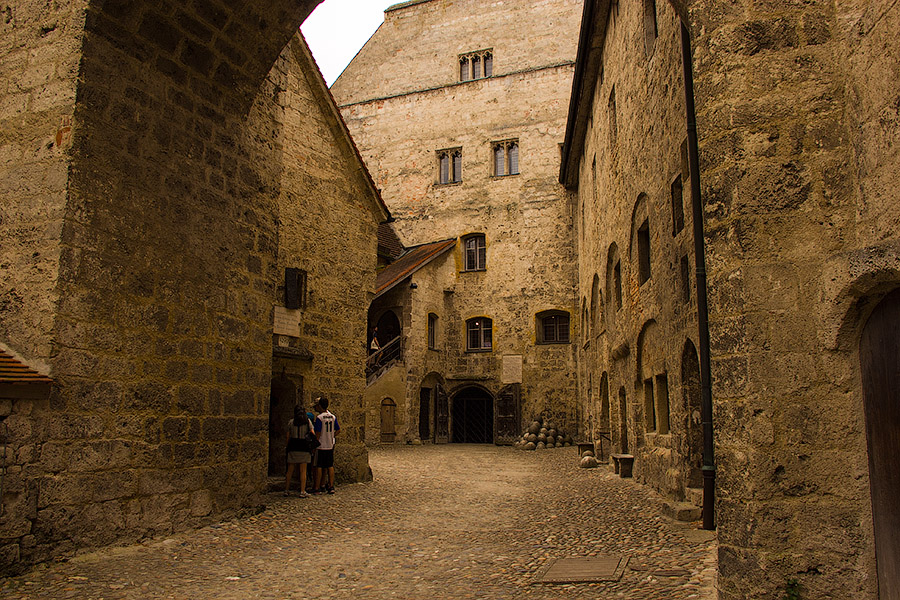 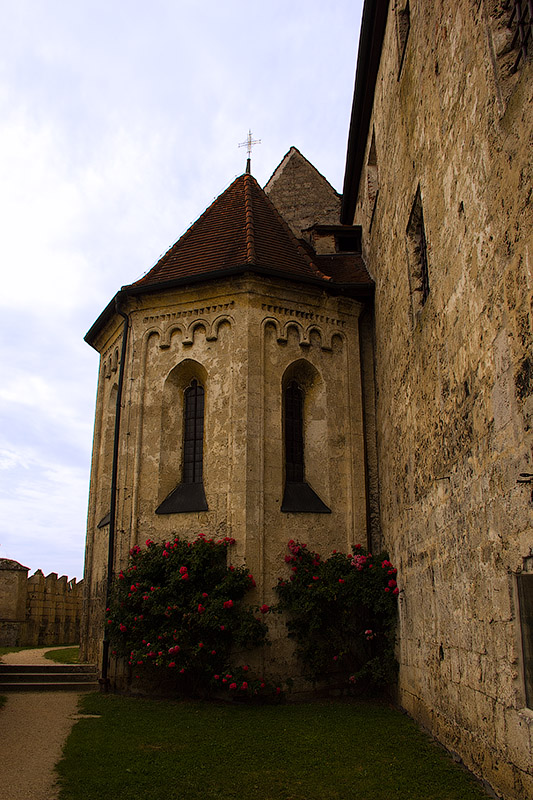 Looking for a feudal way of life may be here to visit the interior of the fortress. However, this tour is already worth the money. Bonus attached to her ascent to the tower, and the ability to look at the castle and the city from the highest point. We've been there a couple of years ago, so this time did not go. 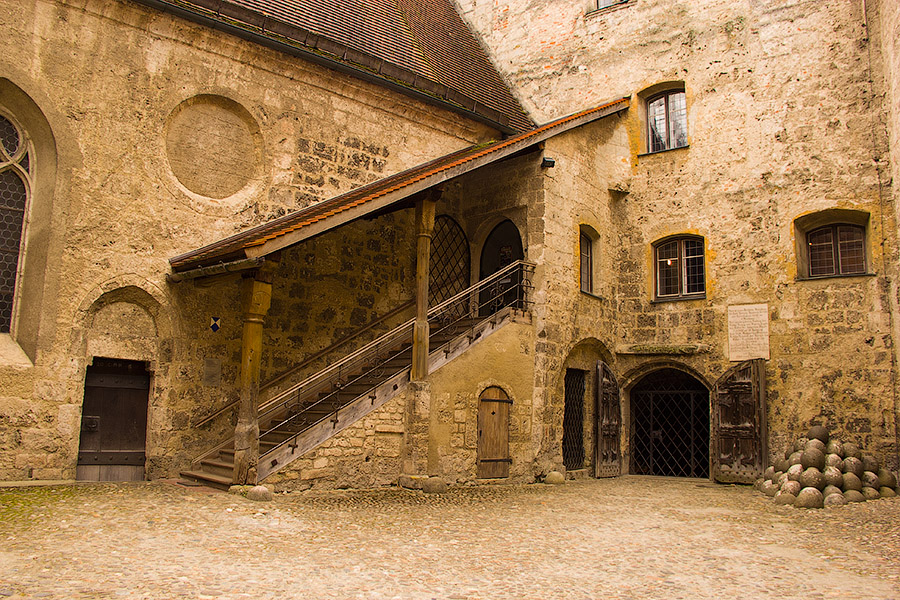 But without a visit to the tower of the fortress offers an excellent view of the old part of the city. Burghausen is located on the Salzach River, which at this point also serves as the border between Germany and Austria. So here to run to a neighboring country - it five minutes. 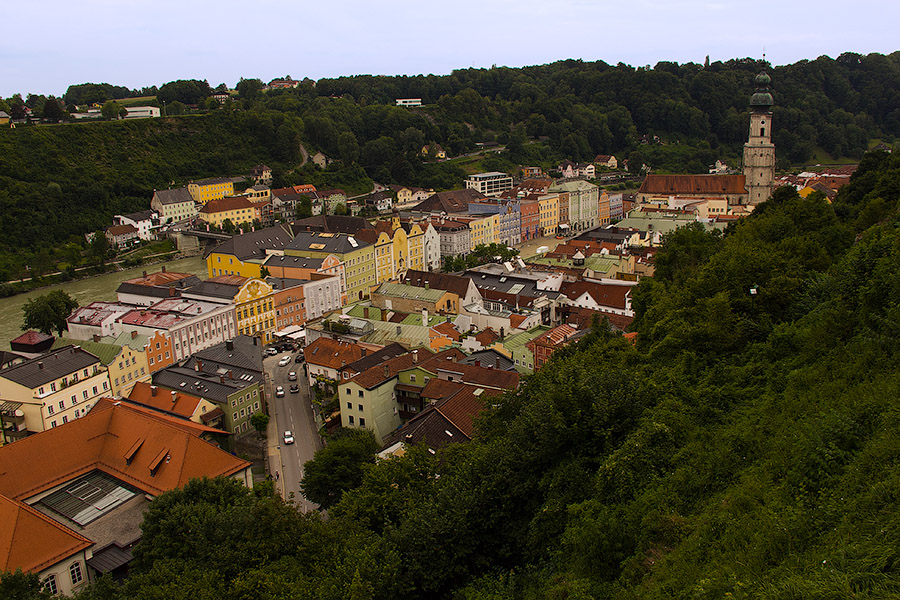 As you can see from the previous pictures, the old part of Burghausen very pretty in itself and worthy of a visit. To go down into it from the fortress can be on a pedestrian path. 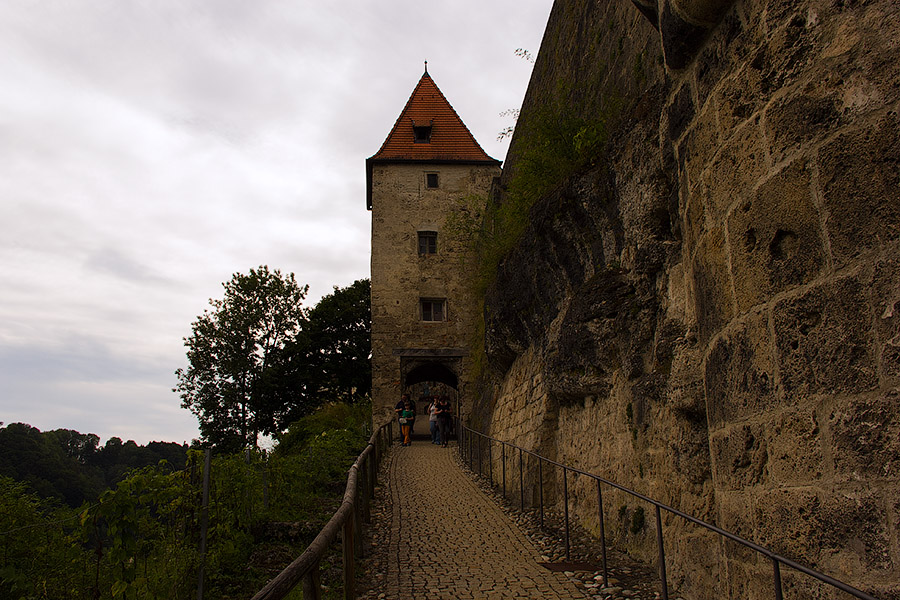 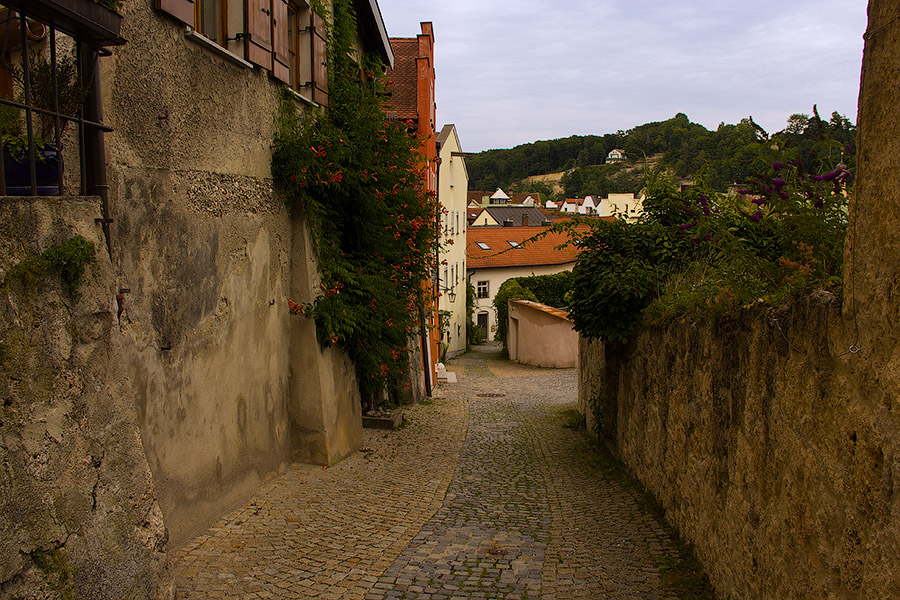 Well, our position is already overloaded with photos, so we'll call it a day. 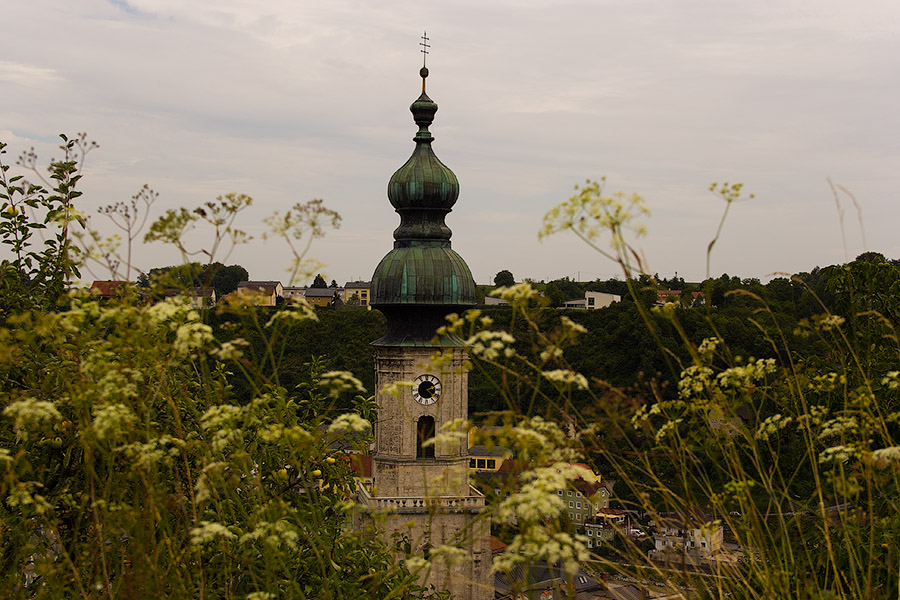