AdBlock detected. Site operation may be disrupted due to running AdBlock. Please disable it for this site.
Home Stories Georgia

If the cool mountain breeze you ever buried a Svaneti, and more precisely in its capital case, then do not need to look around in confusion, standing on its central square, and not knowing in which direction is the famous Caucasian hospitality. My dear, but because it is everywhere, and right and left and all around. Place - it is certainly not an area of three stations where you are not distinguished from Moscow, not a guest of the capital ...
The locals quickly find you, and they carry surround ... where to
be found, because every visitor, even if he is from Tbilisi here as well invisible, as a miner at a textile factory.
surround, yes. Warmth, care and attention. Comfort, maternal care and attention, which can not tell that it is necessary to sing. Because you are in Svaneti, where the guest house, God sends. So consider local, unlike some priezshih, thinking that they are in Svaneti only because ticket purchased ...)
and be led ... But wherever you need. And believe me, the old undeserved talker, you quickly realize that you need a lot of much here. You want to see there are so many that the allotted seven days Svaneti crack and tear ... And do not try to finish 25th hour on your dial, it does not help. I know ... Because I was in place for only two days and three nights. The result - two unworthy Svaneti fasting and bitten elbows. Had I been here at least two weeks, the letters would have been richer for expression and can be between them happened to photos .... 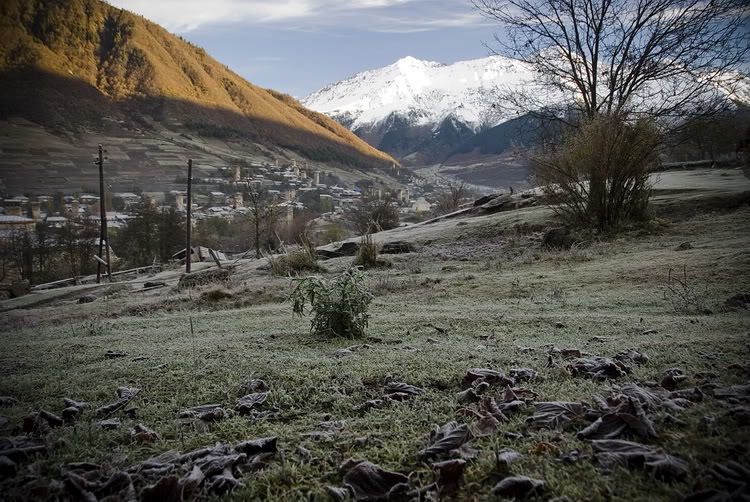 You can once and for all mumbled call it the usual mountain in the morning ... 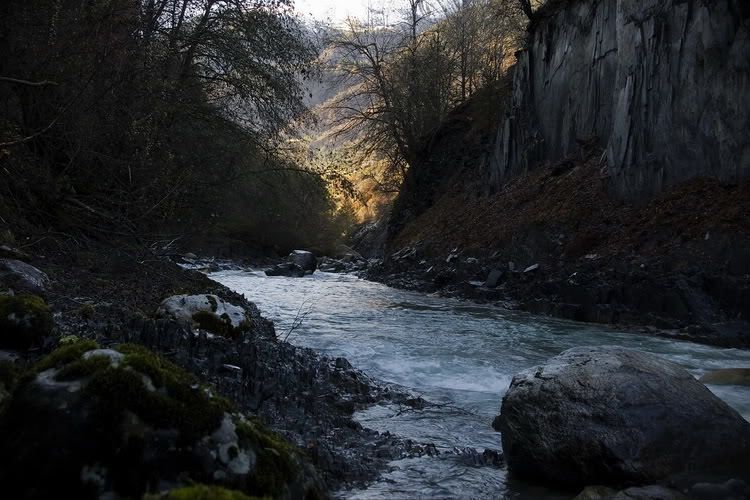 ... But how then to explain why I love to get up in places even after dark, to see how transparent thin air stars, going, fun winking at last, and the top of that around me, flash and flare up one after the other, set on fire confidently and in a businesslike way in a million million one hundred and first time ringing a golden fire. 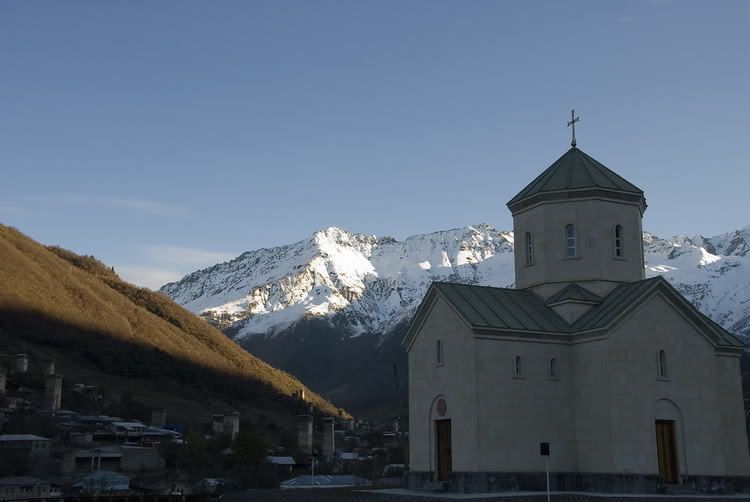 But the local morning and more rustic, with the smell of fresh milk and a wood stove smoke. 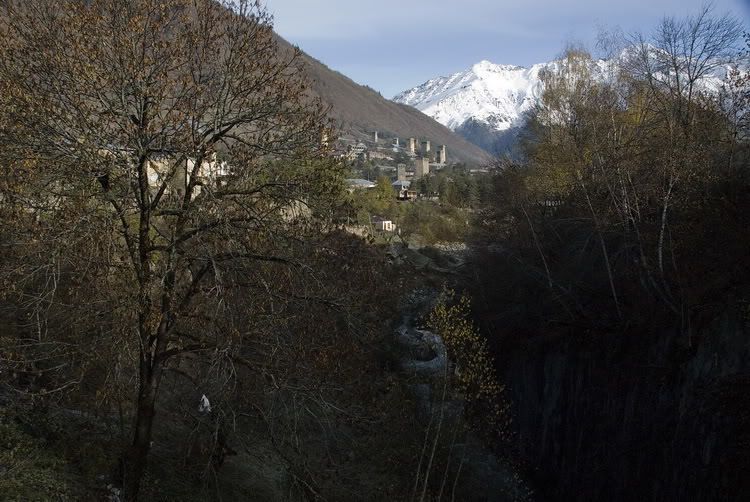 Places too was awake. 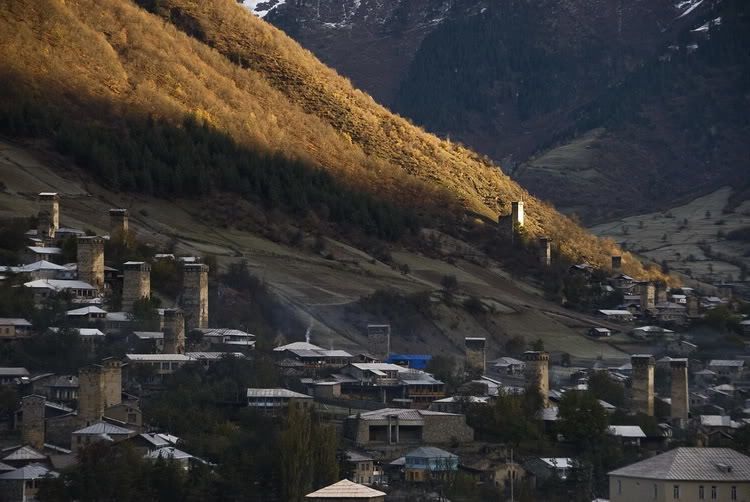 So, gritting gate, I hastily go, crunching yesterday morning Ledkov puddles, I hasten to get the best seats in the stalls of the city place ... Today here give dawn. 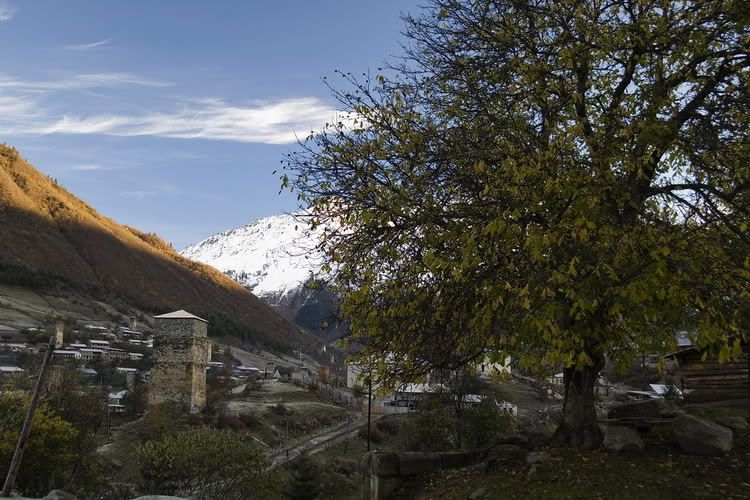 Sit ...
Watch as golden light quickly slides down the slope in front, taking himself more and more Svan towers ... 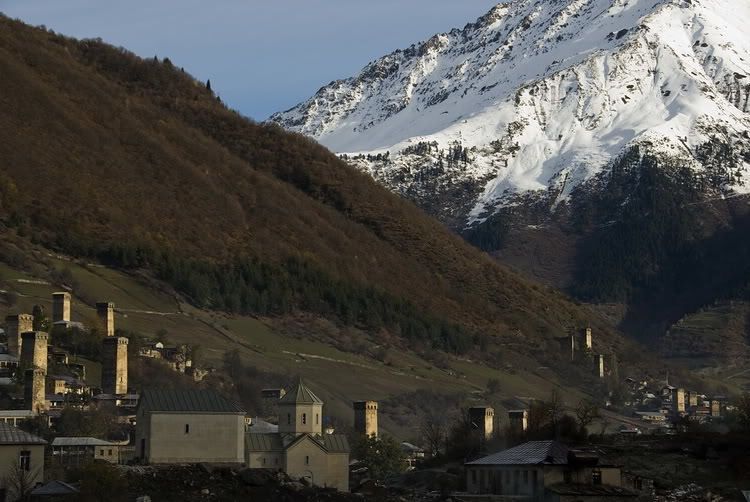 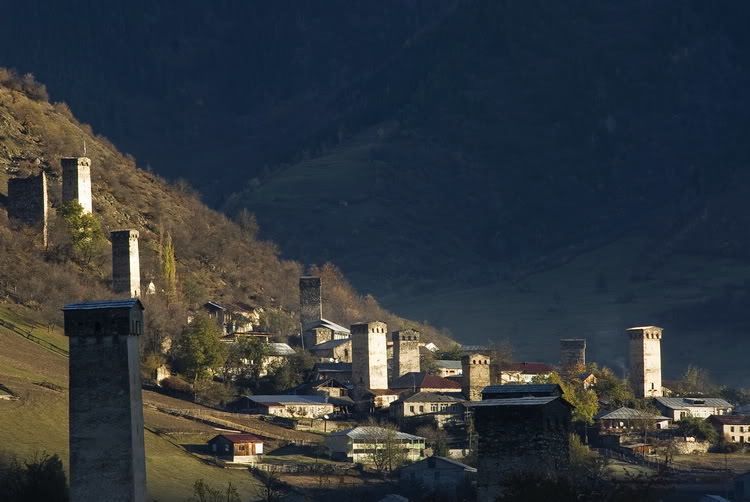 Right, for the fence at the manor, for me all this time watching a kid, full of himself on a Caucasian pedigree and hairy ... And he roared loudly, not being able to calmly look at how I steal his Svan towers. .. With the camera, steal, yeah. In the end, it does not stand, peremahivaet over the fence, and valiant gallop rushes to me, pretending to dashing cavalry charge. Rattling chain ...
Dear, I love dogs. But this time, in this record, my not for this letter. I just want to say that adoring, I know them, and knew perfectly well that the most stupid thing in my case it was:
a) to squeal like a little girl, and even ultrasound
b) on the other hand, try to scare Caucasian, grinning menacingly
in) to run.
I just sat there and looked into the lens, and the lens watched this ... 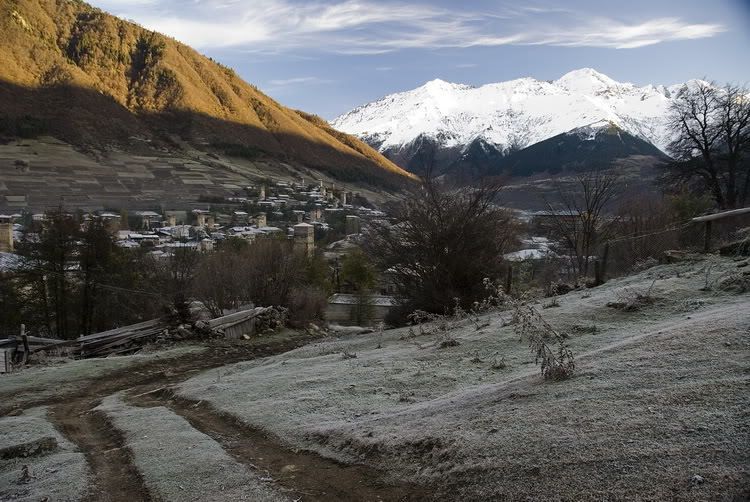 Buddy flew to me with a squeal of the brake pads. Intermittently sniffed my right ear. Stood ... and wagged his tail. One, two ... right-left ...
Ha, but the owner and runs.
- Speaks Russian?
- While yes ...)
Sorry for the dog and asks:
- Where are you from Ukraine?
- From Russia. ..
Here you Svaneti - learning about it, begins to call for a visit). And it's half past seven in the morning! 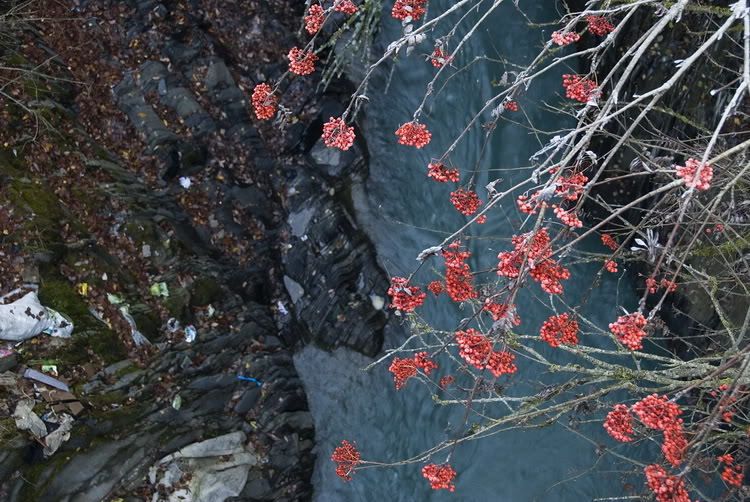 Here it is time to say good words about the family in which I had the good fortune to live. My dear, only one place where lives a little more than two thousand people, now officially (program Svaneti Tourism Center) are hosting about 60 families. Western people it has long been called "homestay accommodation" and is catching on around the world ...
in place to build a hotel, and not one already there and a café and restaurant, but how difficult it will obscure the simple Svaneti hosts such Rosa and Vitaly Shukvani. And my bony tongue breaks in half faster than say that we got a cool "service" or, more square, "the service was on high".) Wild stamp itself ... No. We were visiting family Shukvani. Service is non-Russian word with sour taste was absent at the hearing, but it was soft and warm word of concern.
There was a big Svan house, where on the ground floor hosts live, a shower and a toilet (clean! With hot water!), And the second guest room and a spacious sun terrace, where so well with their homework). 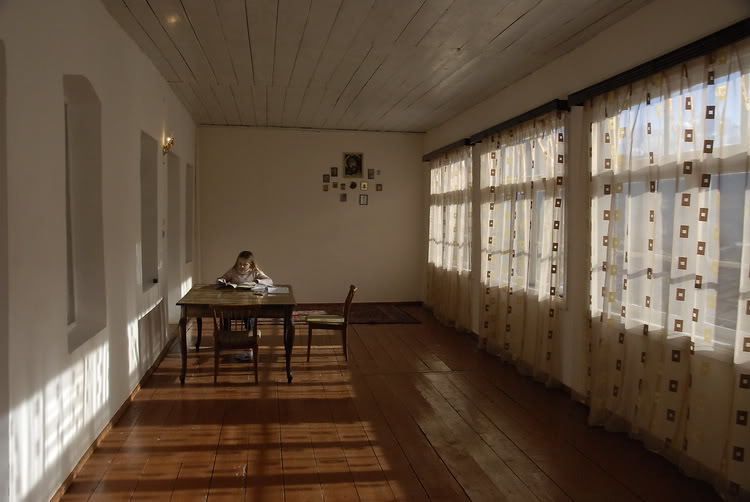 Yes, at night in November on the second floor is pretty cool, but Rose did not spare blankets. Had breakfast-lunch-dinner, from a simple peasant food (yogurt, lobiani, khachapuri ...), but made ​​with their own products and to order delicious! ... And in huge quantities, incompatible with life ...
There were roses and daughter Vitaly - Tamara (Tamuna) and Anna. From my Katya they quickly found a common language, even if it turned out to be English ... 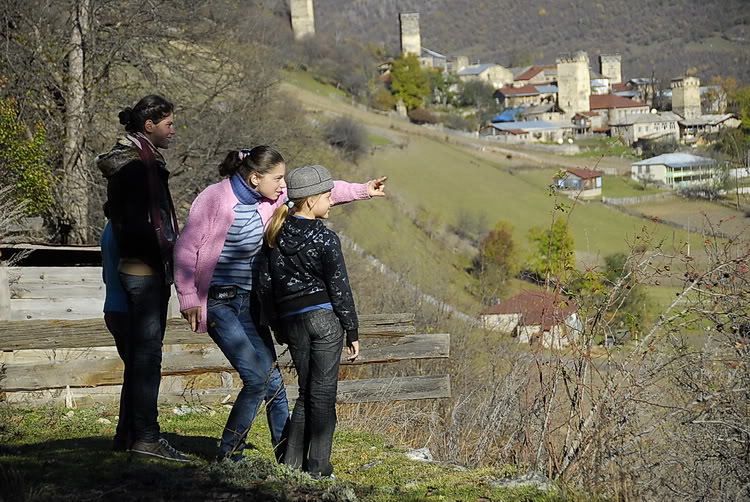 Were funny things. The first question Roses when meeting was: "And do you eat meat?" For a moment I felt in India ...) It was found that frequent visitors of this family and all of Svaneti happen quite orthodox Israelis, as well as irreconcilable with the killing of animals are vegetarians. And they already teach Svan interested in the situation! About the fact that English is now in Svaneti is not just fashionable, and needs, it is necessary to keep silent ... and foreigners every year comes more and more, with all of them without the knowledge of Svan. A Russian ... We were the first Russian guests in this family ... for 18 years.
And another was a tower. Yes, the family Tower family Shukvani ... 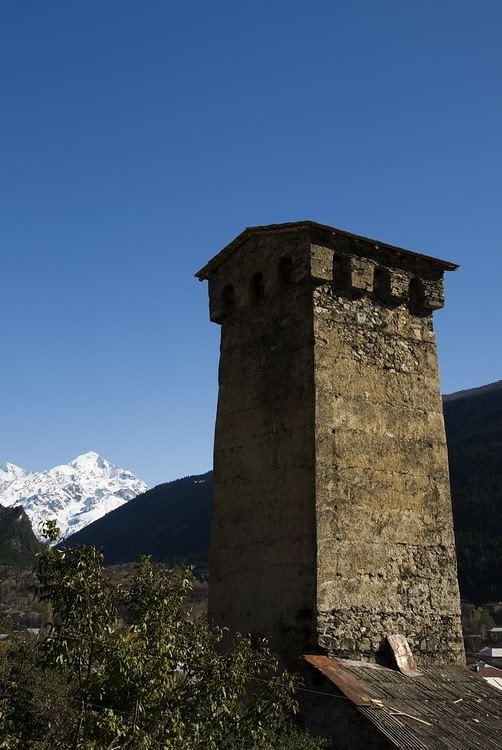 ... Which gave us almost without a fight, and then only because our unit was commanded by Tamuna and Anna. Nothing funny. This Svan tower is a fortress, unique in every way. Stuffed stock of grain, flour, dried meat, it could withstand a siege of a few months. 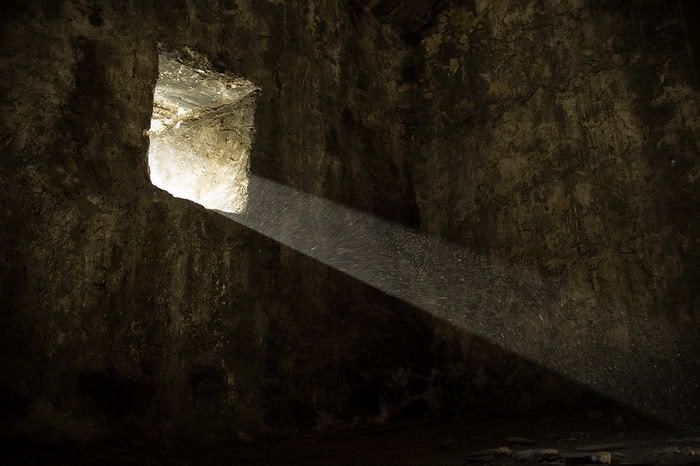 Roughly break into it is also not allowed. The walls are high, strong and already captured forgotten local solution. Top, under the roof loopholes could threaten the attackers, leaving defenders out of reach. Height of about 25 meters each (~ 7th floor in an urban setting) here they are 4 or 5 floors. No elevator, has quietly materyaschayasya staircase beneath you, the joy of any museum. It is despicable ends about three feet from the hole in the ceiling ... in which still need to get a very aptly. I have this turned out not immediately ... And so four or five times.
That is the very same hole and loopholes under the roof. 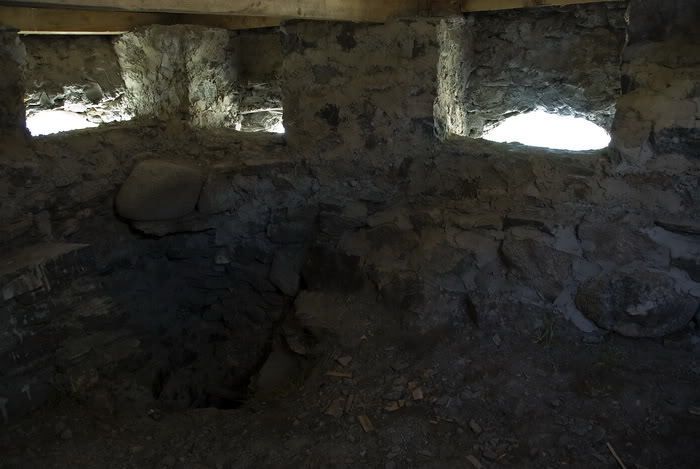 But sighs ends and begins aahs when you get to the roof. Fifteen square meters of fresh boards as a carpet-plane. Over the place. 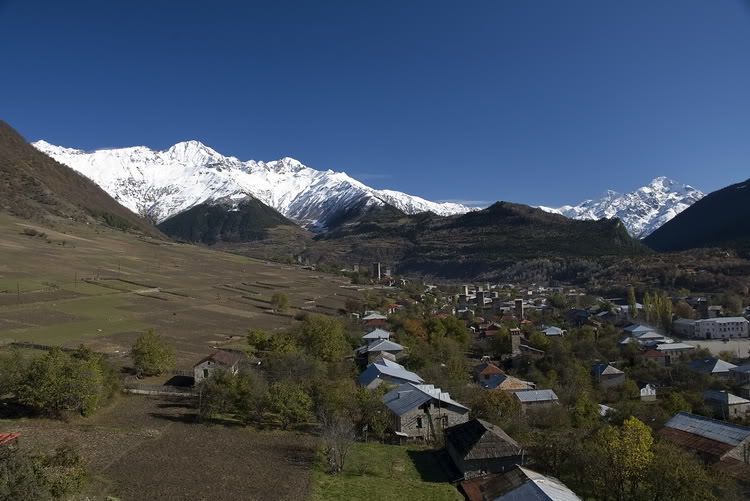 This Tamuna and Anna half a brave chukotskoy family. 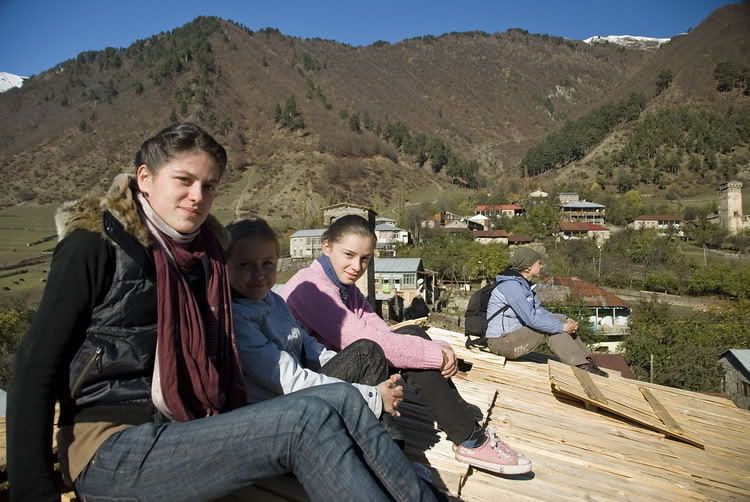 Girls as expected, a bit shy about being photographed, but ... Vitaly and Rose have to be proud. In Tamuna already good English and she did not really even want to leave Svaneti, as it was 10-15 years ago. Worked as a guide, to tell foreigners, primeval and uncouth, its unique culture ... is not unique to say? Come on, experts, ethnographers, where, in what ethnic group, nationality still preserved and is a family-owned building (and how!) With a thousand years of history? The youngest age Svan tower 600. In one place of their 47, and throughout Svaneti 200 ... And how much was destroyed ... Well, you need a little walk around the place, and then I'll give you a cultural and historical materialism .. .)
Walk to these quiet streets, which are covered with stone fences, so quiet that you can hear the streaming sunlight ... 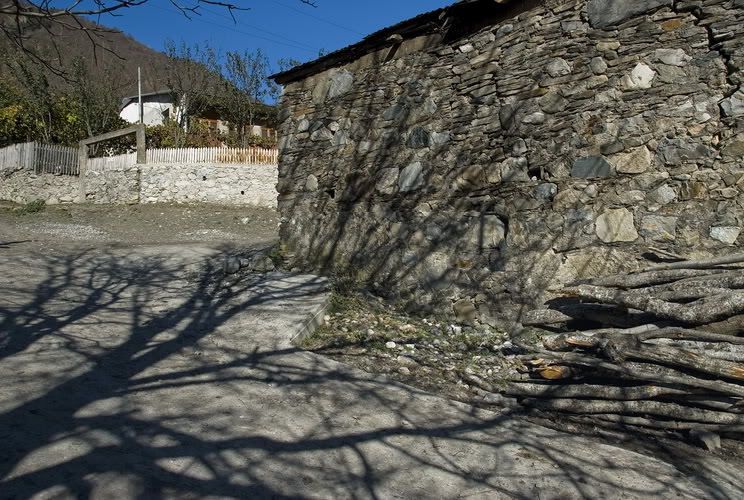 ... Living here and everywhere on the other side of the ancient transition too. 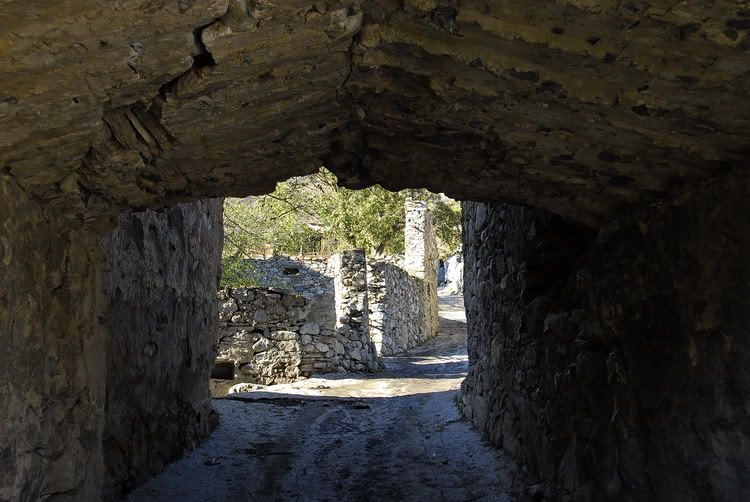 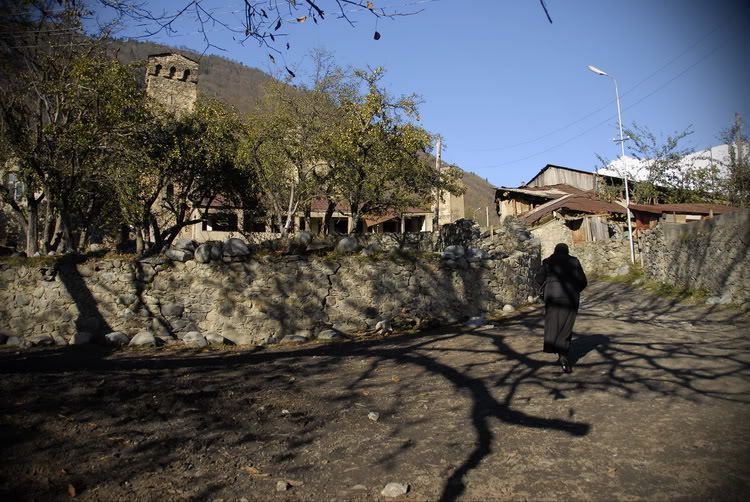 Walk, inhaling the aroma of apples, so light, warm, autumn ... 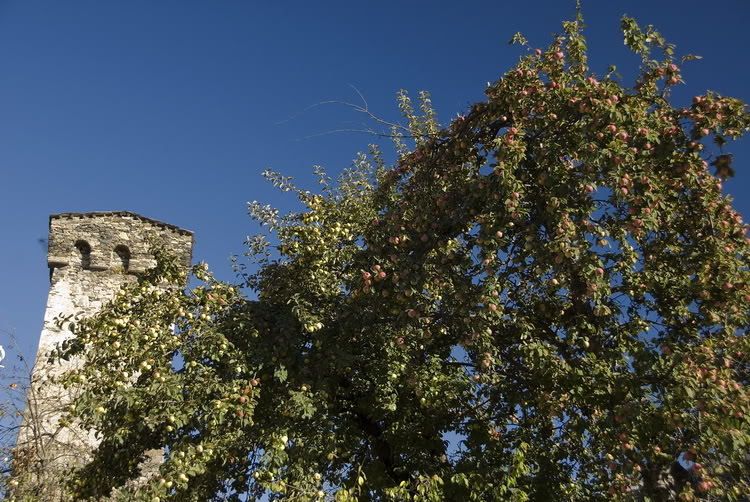 Svaneti is apple paradise. She cheated grapes or persimmon, but fell asleep in the autumn apples. 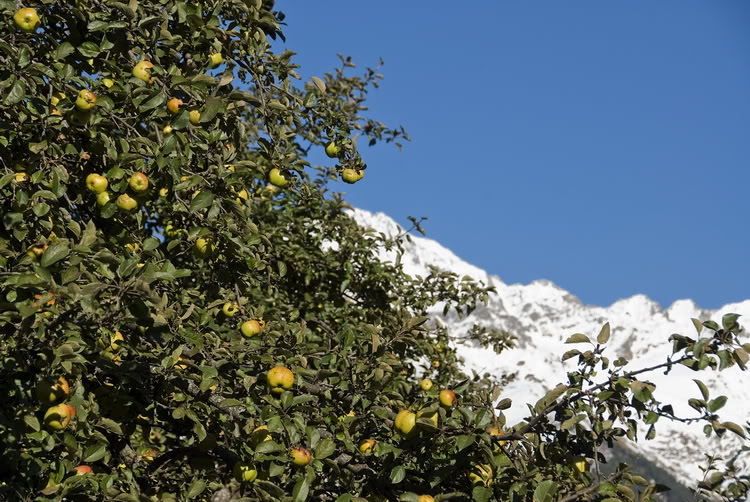 Yes, just like that, with peaks and architectural monuments. 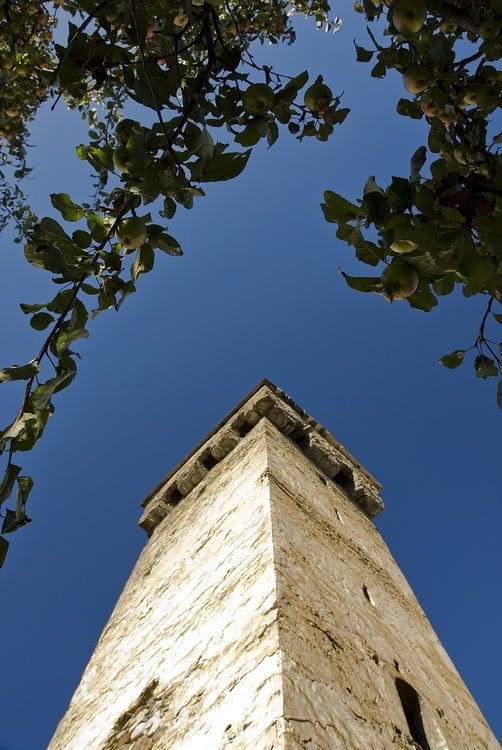 The peak was common, apples don't-know-whose, but the tower belongs to the genus known in Svaneti Margiani. Here it is, the hostess Larissa Margiani, greets us. 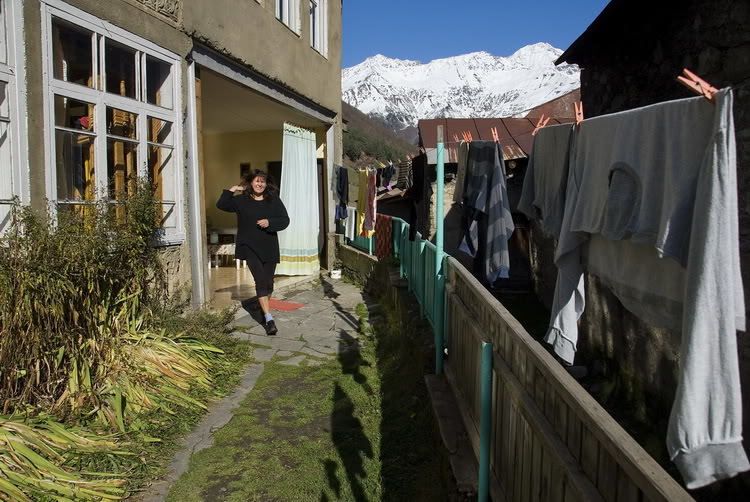 Very glamorous and exciting in his love for this land people ... Originally from the Ukraine, Siberia was the husband-Swan and higher education, but it is in Svaneti felt at home. I want to leave here her words ...
- You know, it happens in the morning already able to get everything - economy, problems ... Hard this peasant life after all, especially for women. Then Making yourself a cup of coffee, get out of the house, sit down, look at it all, this snow on these mountains, and all the problems are small in ten minutes, and joy, and easy on the soul is, and I understand that here in my place, and my life, and they, the mountains I will not let go ... Never. 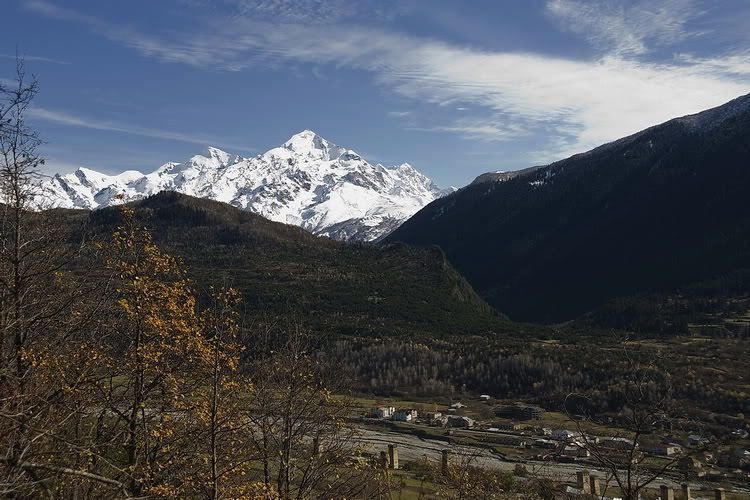 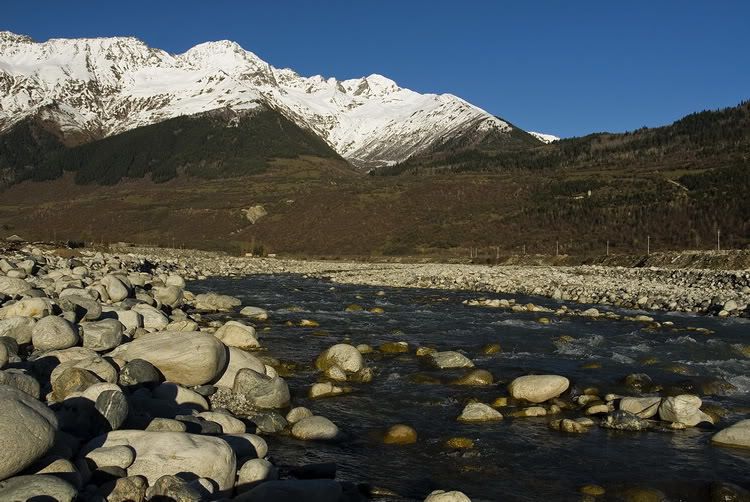 And I'm well aware of it, yes. And jealous. Honestly.
And more. Larissa is not just a housewife in Svan family. This is a man constantly explore and delve into the culture of Svan, a man who can talk for hours, not weeks to talk about their customs and traditions, sometimes incomprehensible even for Georgians. Helped her in this and education, and marriage, and knowledge of the language (and Svan and Georgian), and of course, a lively mind and a love of Svaneti. Got it all in the creation of a family museum, where the guide and translator Larissa Margiani will give you information about more than Swann Google thirty-fifth generation ... And she does this and more in Russian, in fluent Russian, so fluent that he occasionally ran outside Locked my perception. 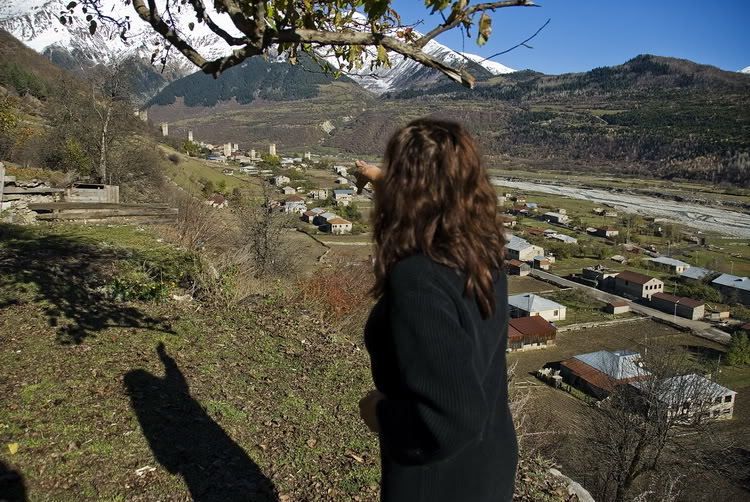 And what now? Scoop broke down irretrievably, exchange and non-refundable. 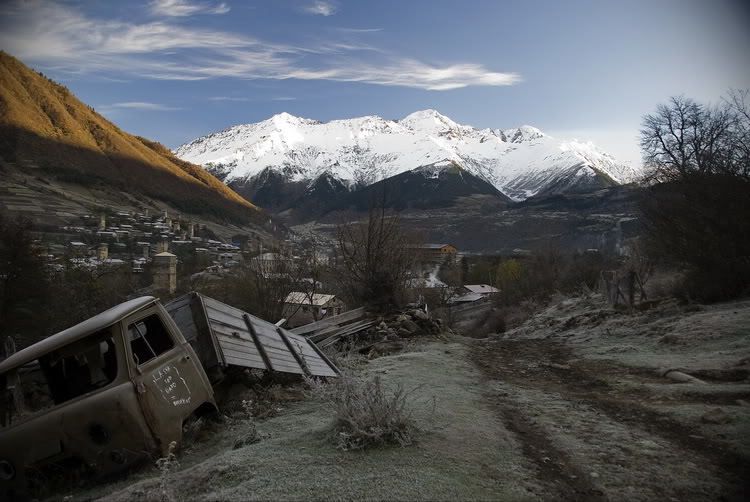 Times when some Swans left outside Svaneti in search of work, while others took the machine and walked in the way of the message to take away something, too, leave. Yes, there was the problem of unemployment, and with it the low salaries. But more and more Svan begins to believe that their edges can and should go well fed mass tourist and they are well aware that while machines better hide away. And not to show them to tourists. So do not be afraid. Do not be afraid to go to Svaneti. 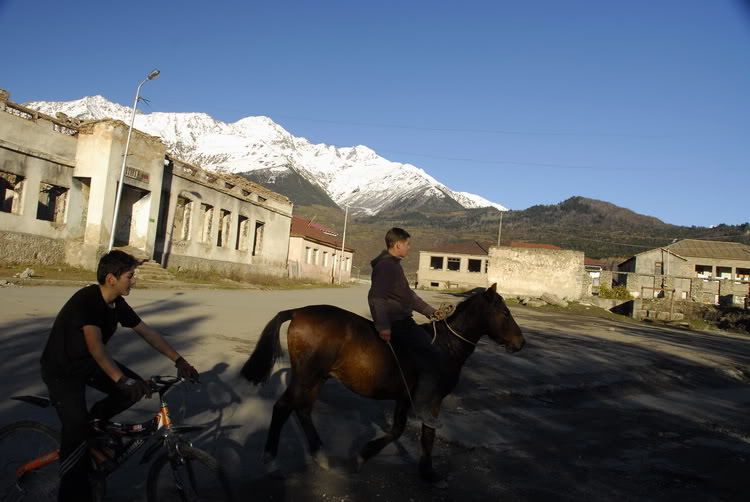 Here now a little money flowed, and least of all interested Swans block this brook some stupid robbery. Instead, they are now a lot of build and repair. Already completed the construction of the road from Zugdidi, it will also pay local ... on different foreign grants restored tower and houses, bridges, sidewalks and streets. Everything is going to to make Svaneti in the cultural and rendered habitable area of Georgia a la Signakhi. About Signakhi I will tell separately, it is very worthy of anything upominatelnogo. But after visiting this wonderful town with cobbled streets ringing, clean balconies-in-colors, for some reason I was afraid of one thing, remembering Svaneti.
Will I be able to see improvement after the mountain at his feet? That's right, on a street just by looking down? 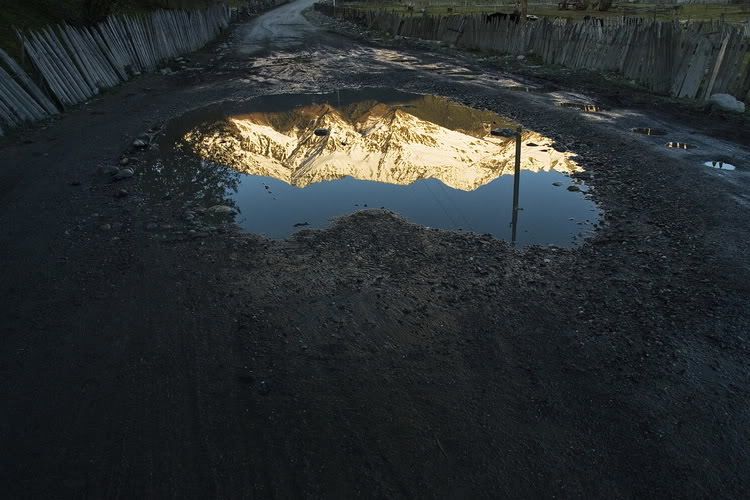 A climb to Svaneti is not so difficult. Cool mountain breeze blowing throughout the year ...)