AdBlock detected. Site operation may be disrupted due to running AdBlock. Please disable it for this site.
Home Stories Cuba

So, being heard about the terrible poverty and devastation that prevails outside the cozy tourist areas - Varadero, in  black Limpopo  "real Cuba", we, with some trepidation, preparing for the first trip around the island. 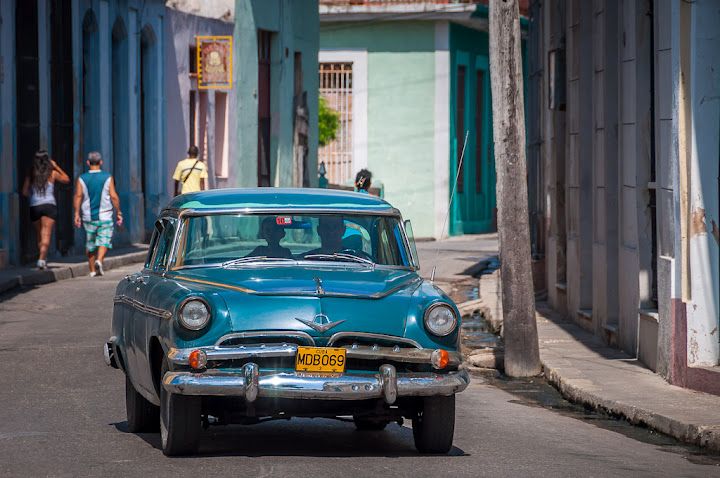 Our goal was the closest major city of Matanzas, is the center of the homonymous province to which belongs and Varadero .. choose to travel the simplest (if not the cheapest) way, we took a taxi from the hotel's doorstep, and the driver said "Matanzas, the center of ports favor! ". After 20 minutes, we were already in place. 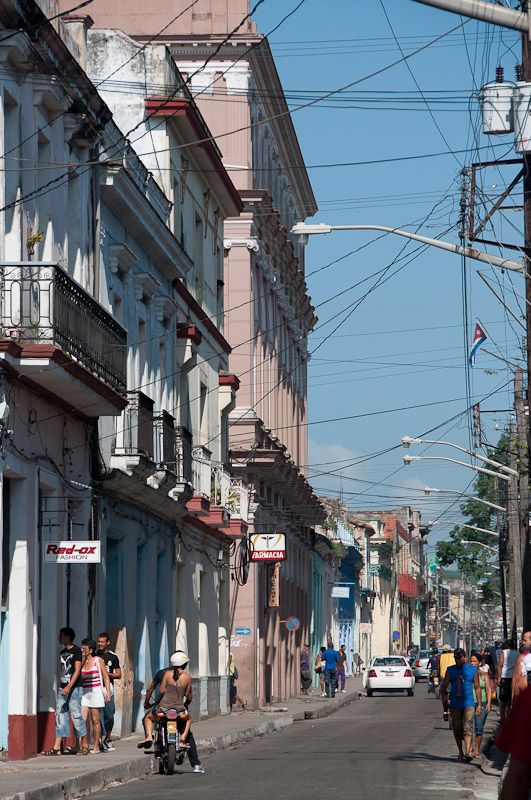 Coming out of the car, we moved along one of the streets in the direction came into view over the roofs of the spiers of a cathedral. This photograph was taken at once, leaving the car .. So here was our first look at the ordinary Cuban reality. 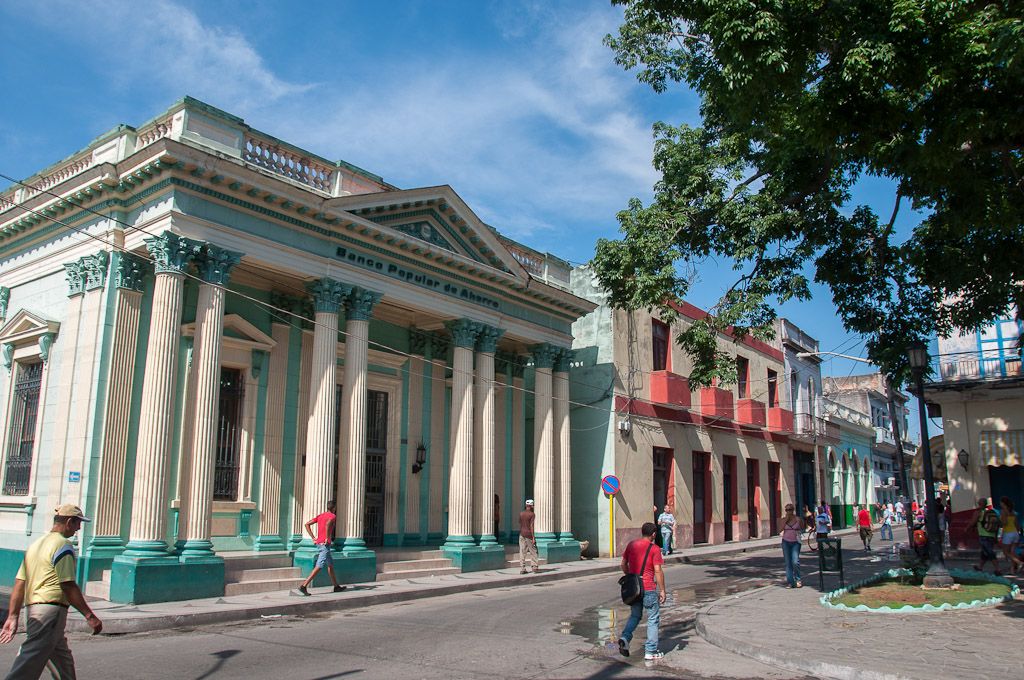 Contrary to expectations, we saw quite ordinary Latin American city. People dressed not rich, but well, the streets are clean, the house - it is quite nice. If we did not know exactly what is in Cuba, one species could not guess.

But if just a little bit to look, immediately located and some local exotic!
Here, for example, an unusual monument to the uprising of slaves sugar plantations - a huge, life-size, cast-iron gear with a bell hanging over it. The tree which leaned against the gear, is not quite normal. This ceiba, "papaya" - the closest analogue baobab found black slaves brought from Africa in the New World, and recognized the sacred tree. Religious overtones, of course, Cubans now forgotten, but still the center of many Cuban cities grow these trees. 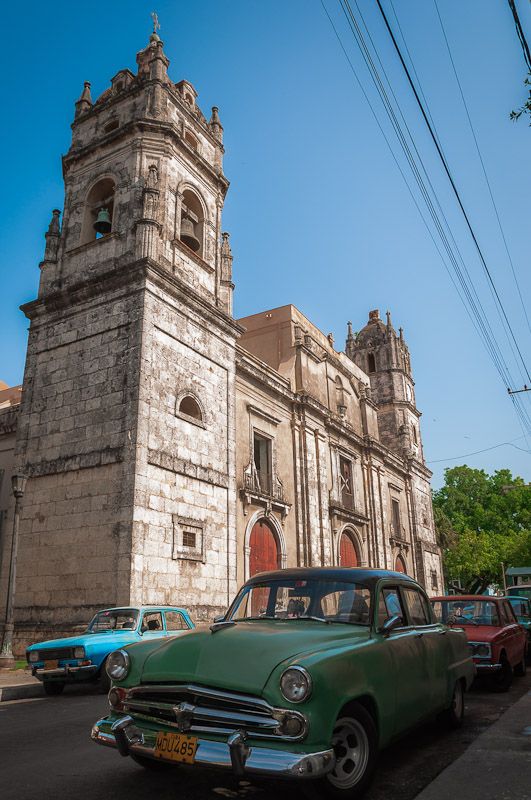 And here is the same cathedral, will serve as a reference point. Cathedral of San Carlos Borromeo.
By itself, it's not that unique, but surrounded by such vehicles .. :) 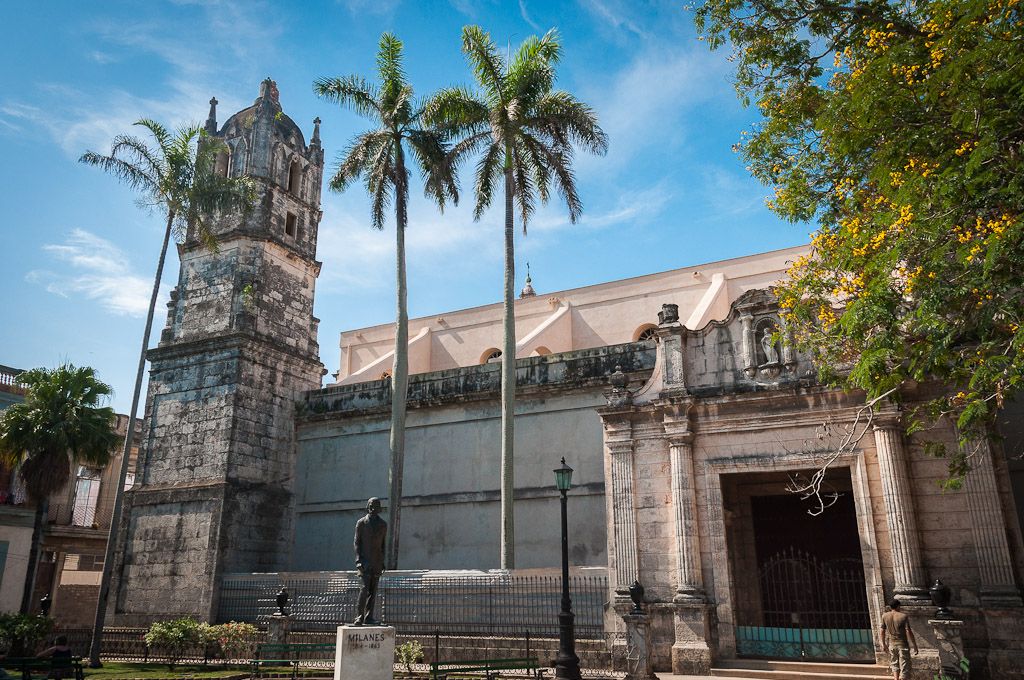 Construction of the cathedral began in the late 17th century on the site of a wooden churches, covered with banana leaves, and lasted about 50ti years ended in the early 18th century. Inside you can not enter - in communist Cuba Cathedral, by itself, is not acting, and become a museum chego something he was apparently not meant .. 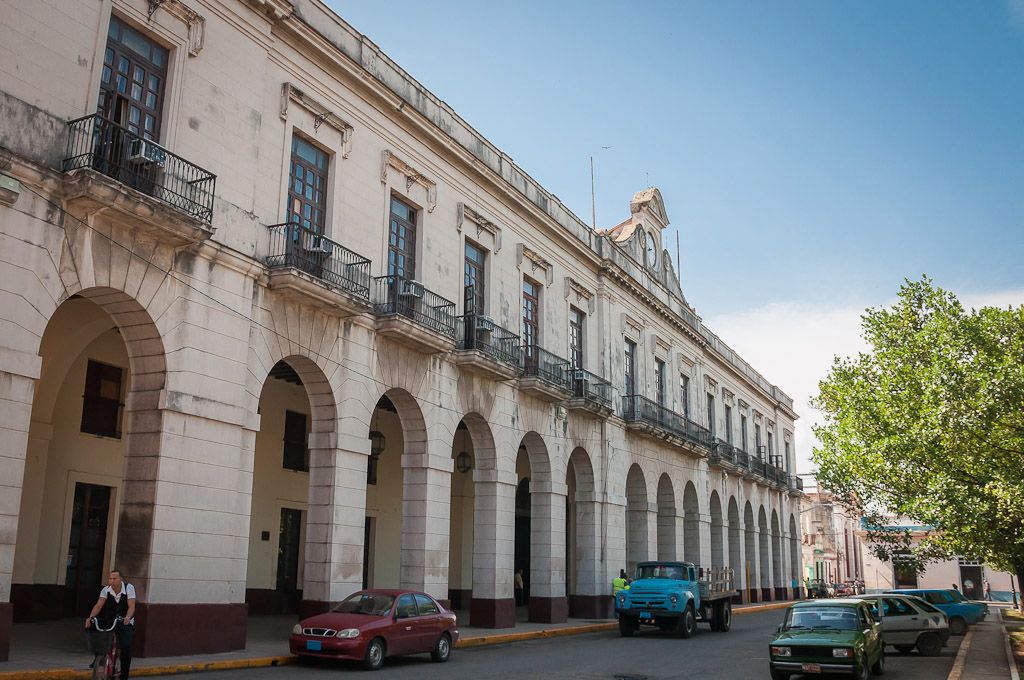 The whole city center is very compact. Couple area, a few streets, where the main attractions - almost everything can be seen on foot in a short time. Coming in from the cathedral along the street, we went to the Plaza de la Libertad. 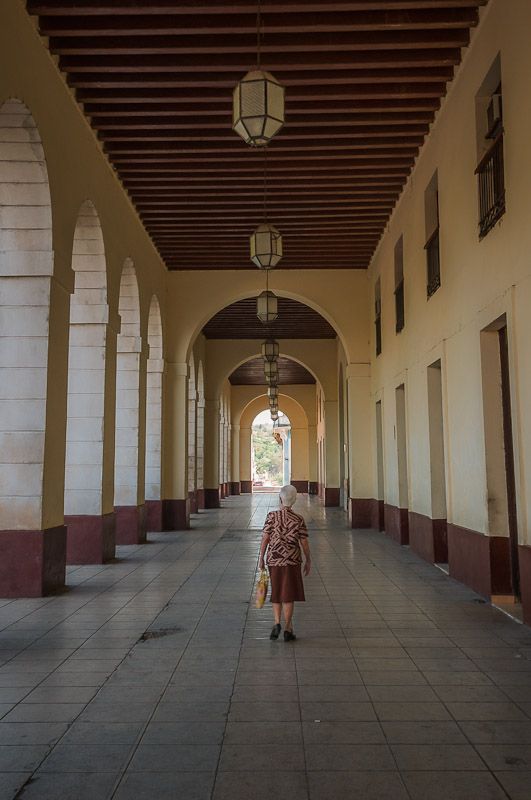 On the way, we continued to get accustomed to the Cubans. We can not say that they are very different from other Latin Americans, which we've seen before. But still .. it seemed to us, the Cubans are modest, behave more politely and dress more familiar to our eyes. Probably, in the case of Soviet influence, the more that is much more clearly noticeable in people older generation .. 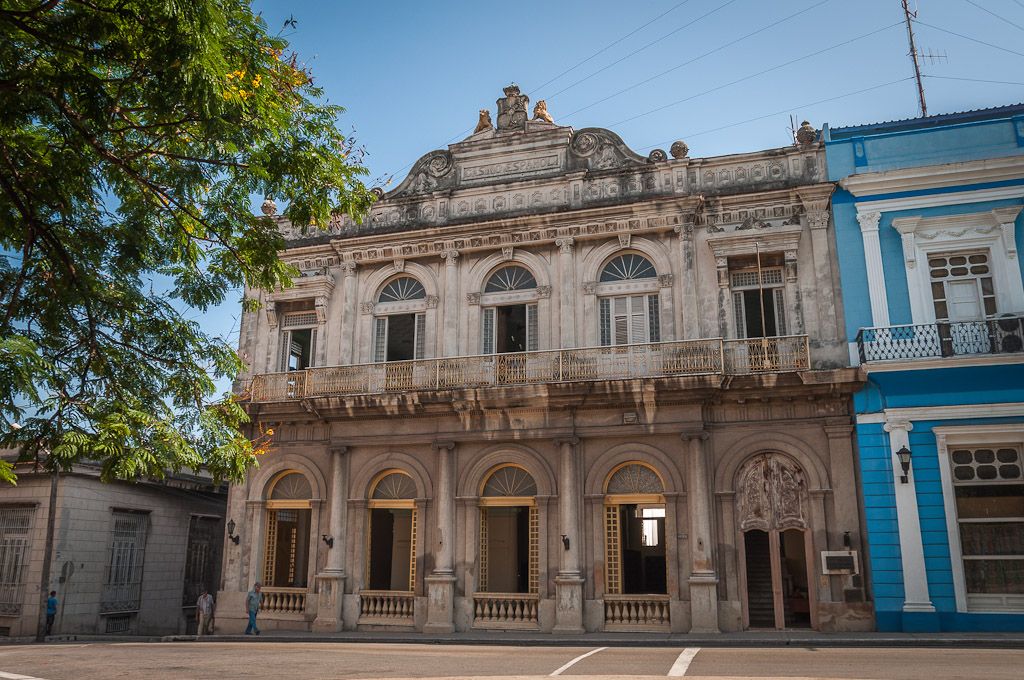 On the corner of the square, just a polite elderly Cuban, pointed us to a beautiful old building, chanting in Spanish that this casino. Really? Casinos in Cuba ?? Peering inside, we saw .. 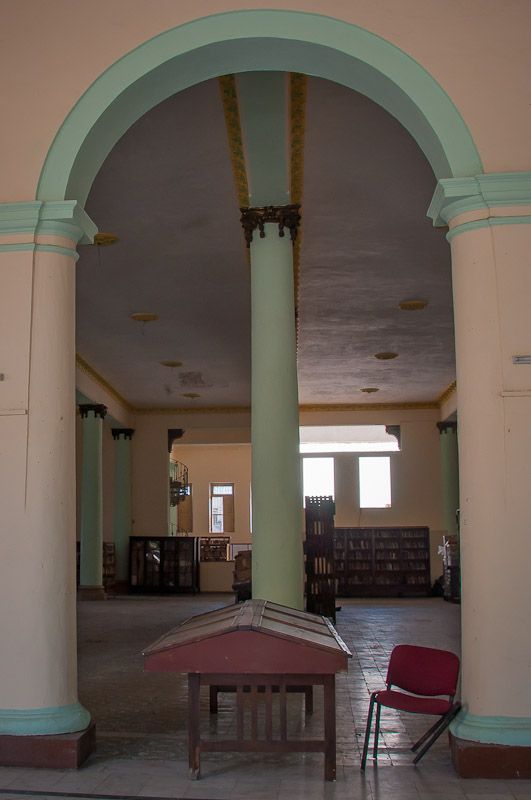 ..biblioteku! Whew! Are you fine! :) It turns out, Casino Espanyol was built already in 1860 .. At that time it was one of the most luxurious casinos on the island with a large ballroom, surrounded by balconies, spacious foyer, billiard .. All this capitalist abundance, of course, was closed after Revolution .. 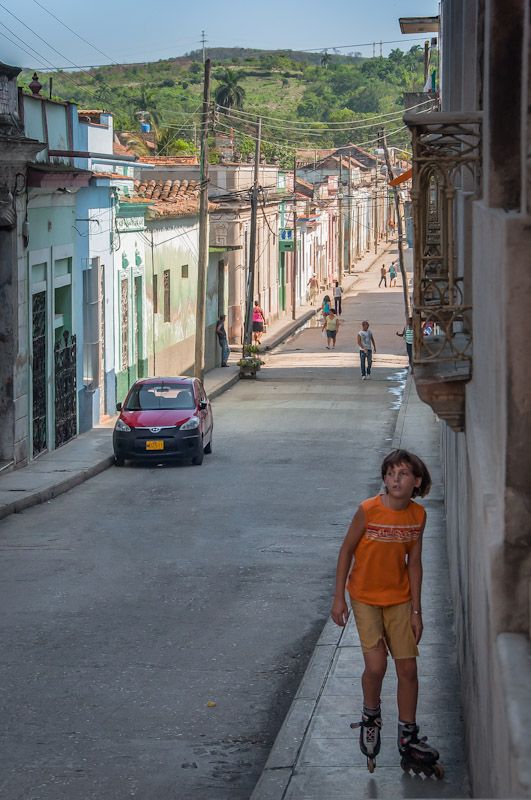 Continuing the theme of the nature of Cubans .. This guy, seeing that I take off the street behind him, stood patiently, leaning against the wall, so that does not bother me as long as I did as many frames as I wanted. And this despite the fact that the rollers constantly went home, threatening to blow it back down the slope! Very educated young man :)

Another legend, heard us before the trip, was that Cuba is very bad with the products and the people there are starving, getting "bread ration" on the cards .. In our opinion, this is nonsense. All the people we've seen in different cities were completely normal appearance and certainly not reminiscent of hungry .. 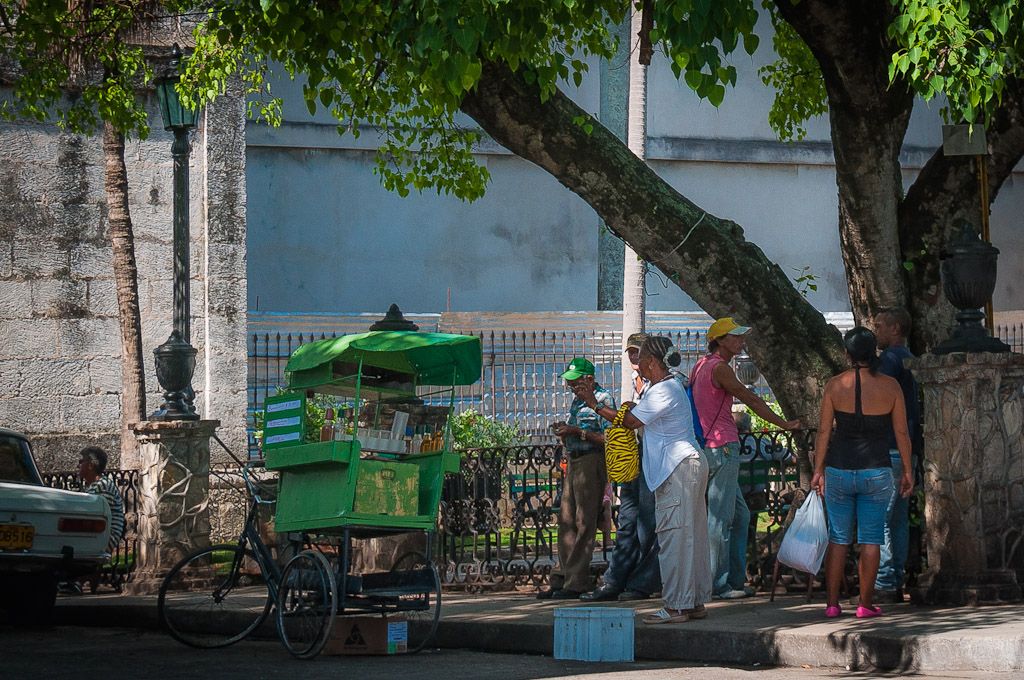 The same can be said about the clothes. The situation reminded us of the end of the 80s in Moscow; when constant despite the empty store shelves, all in general, everything was. 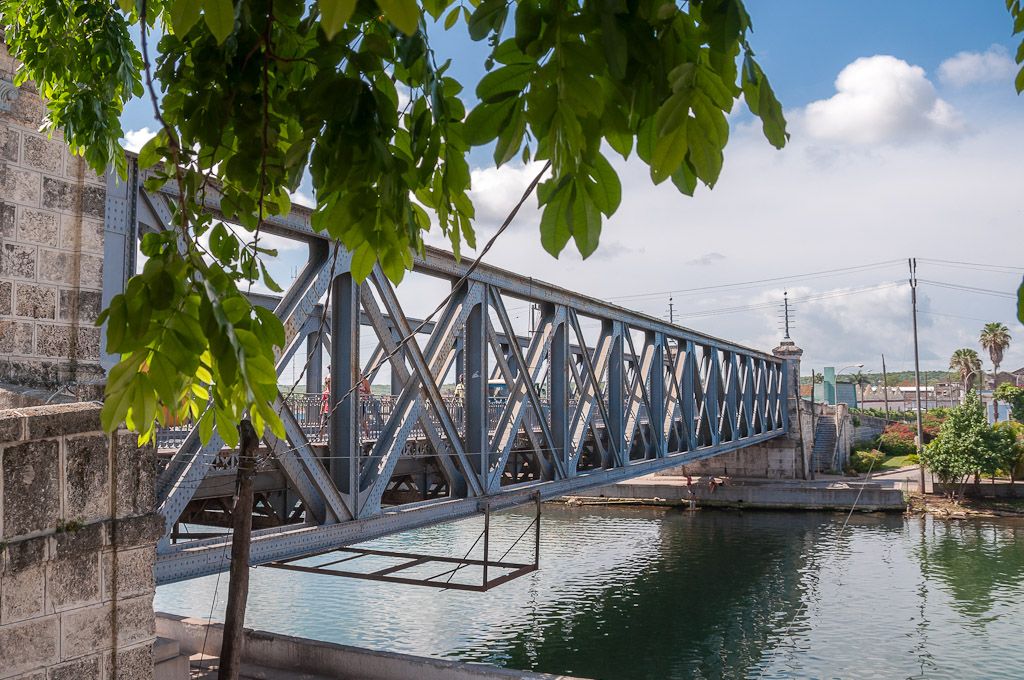 Matanzas is also called the "City of Bridges", because being in the fork of two rivers, areas of the city are connected by a plurality of bridges of different ages and designs. Especially after the bridge we did not hunt, and this, the industrial type of bridge drew to our attention rather because the place where he stood .. 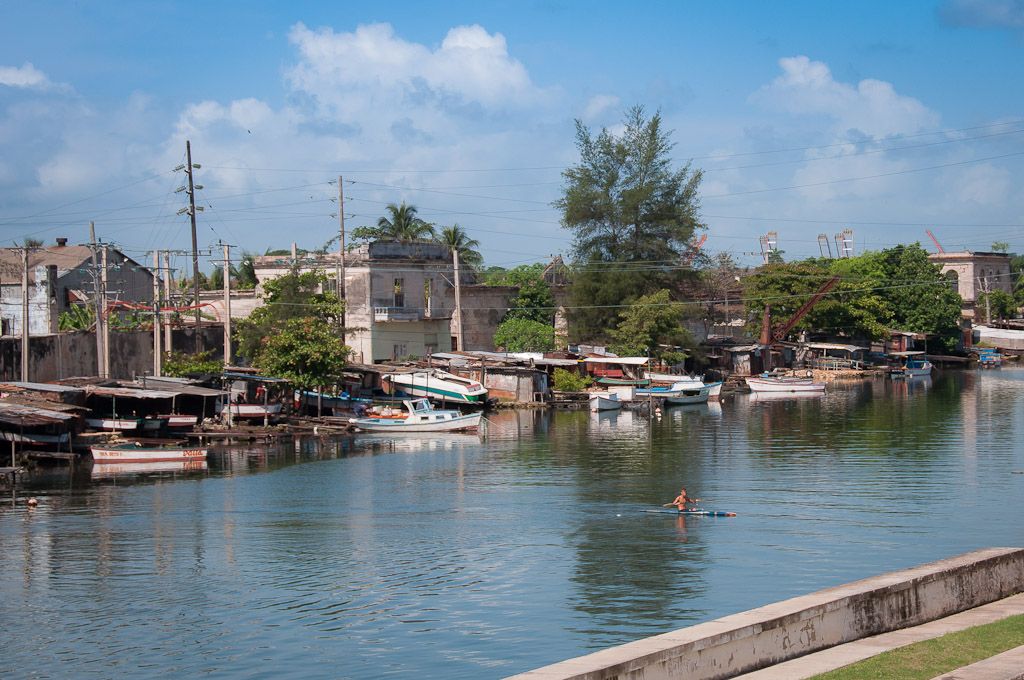 Going to the river we wanted was to exclaim to myself, "Yeah! That's it! We finally found a real Cuban slums!" :) Indeed, the landscape is very much like the river slums of Southeast Asia, Bangkok or rather Manila .. 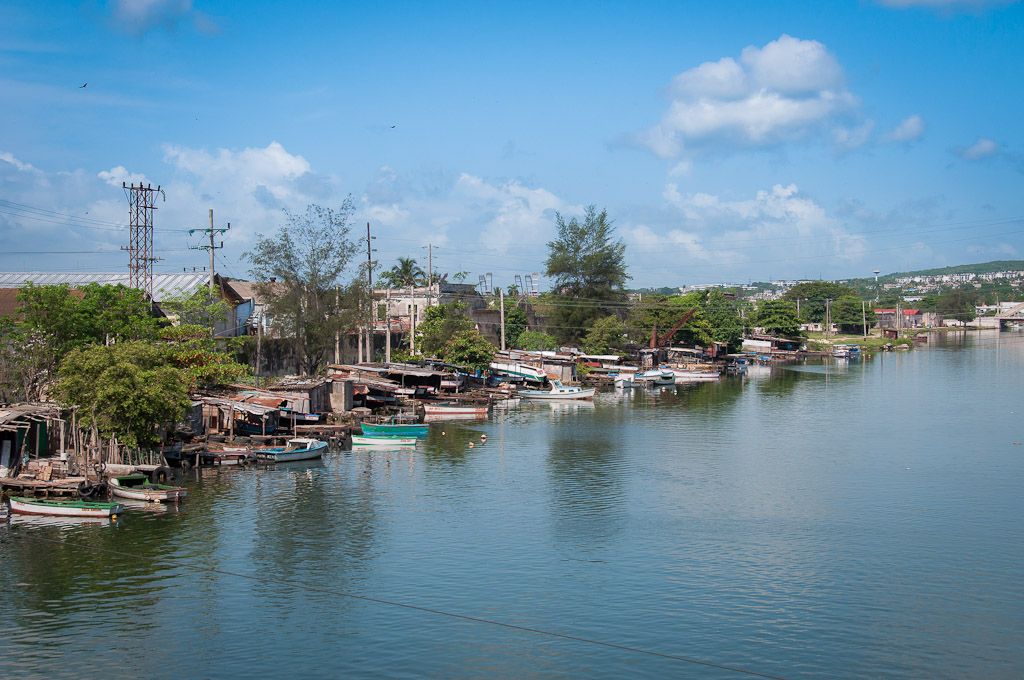 But looking closer, we realized that in front of us, just simply, boat sheds, where nobody lives .. Themselves boats, thus, had quite a neat appearance. Again, the famous Cuban poverty eluded us ..

But that turned out to be quite true, it's flavor of Cuban cars! Having seen a street Varadero, we feared that the old machines are already in Cuba only a tourist attraction .. But nothing of the sort! :) A lot of automobile rarities, nostalgic "Soviet-mobiles" and in general, this auto-curiosities run on all roads and streets! 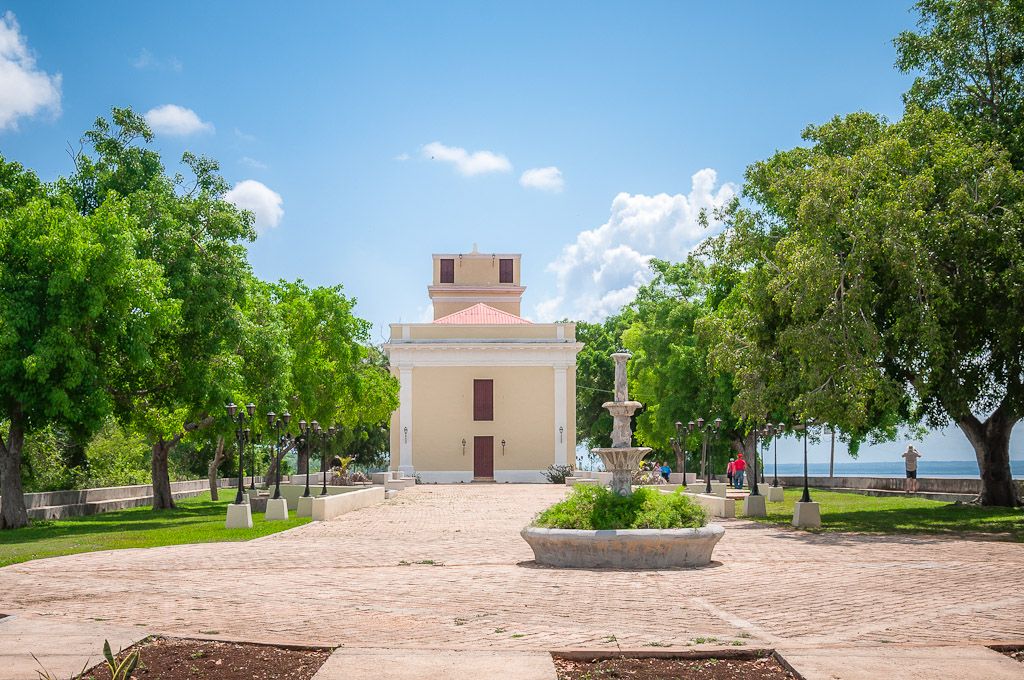 This is a mysterious photo with "a view of the not understand-what from the rear" cite as an illustration of the Cuban advertising. In exactly the same frame adorned on the tourist brochure touting Matanzas. Naturally, viewing this booklet, we had sizable doubt whether it is worth going to this city. Well, that all the same dare :)

For the view from the other side :) Tell me, only it seems to us that it is better?
In fact, this church Ermita de Montserrat, standing on top of a mountain overlooking the city. 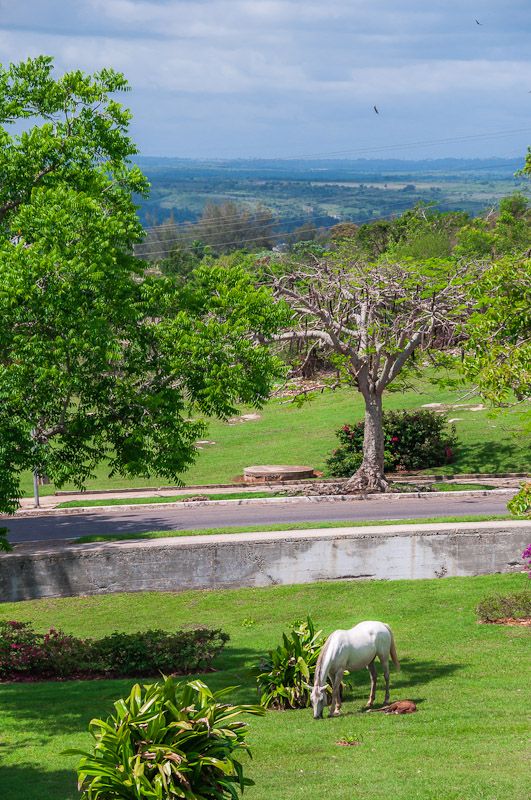 It is interesting not only in itself, but because of the different panoramas that open on all sides of the viewing platform in front of the church. 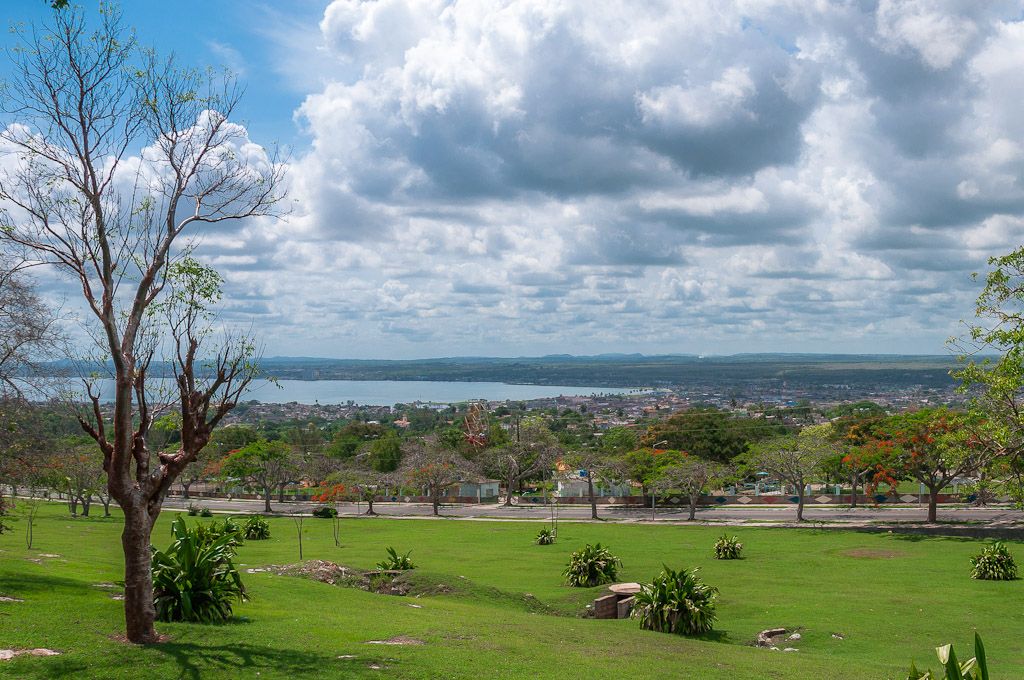 On the one hand you can see at a glance the whole city and the gulf of Matanzas .. On the hillside same "height" visible semi-abandoned military fortifications left, apparently, ever since the US bombing of Cuba ..

On the opposite edge, visible lush green valleys surrounding the city on the landward side .. It is understandable why there once flourished sugar cane ..

On the territory of wandering goats :) 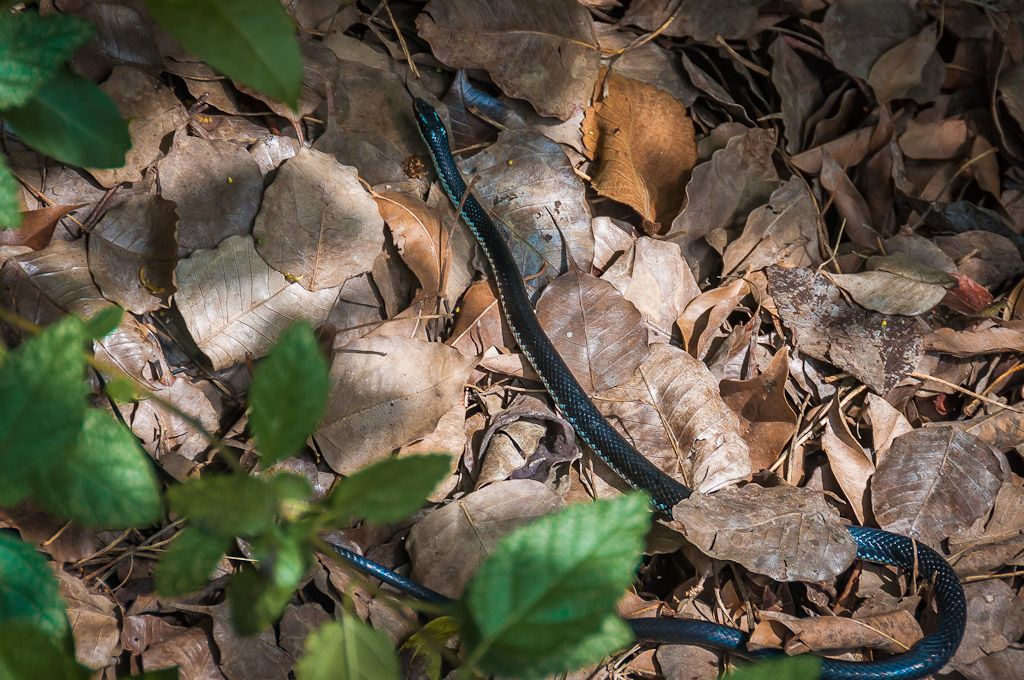 Even here, we've seen a single snake for the whole trip. We do not know exactly who it is assumed only that some of the types of snakes .. Despite the fact that in Cuba, as we know, does not live poisonous snakes, we did not try to get acquainted closer and gave zmeysu quietly crawl down the svim Affairs :) In fact it turned out that this is one of the endemic species of Cuban kolyubrid - Antillophis Andreae. Snake really related to American runners, but leading in nature only in Cuba ..

In addition to the walk through the streets, we in Matanzas was one specific goal. With some weakness to all sorts of flasks, test tubes and all sorts of alchemical devices, we immediately had their eye on Farmatseftiki Museum, in an ancient pharmacy in the center of Matanzas.