AdBlock detected. Site operation may be disrupted due to running AdBlock. Please disable it for this site.
Home Stories Cambodia

To the north of Angkor Thom in the shade of the jungle hiding from the busy tourist flows massive temple of Preah Khan, built at the end of the XII century by King Jayavarman VII in order to honor the memory of his father. In the galleries and courtyards almost restored, but only cleared of undergrowth temple incredibly nice stroll, feeling little discoverers. 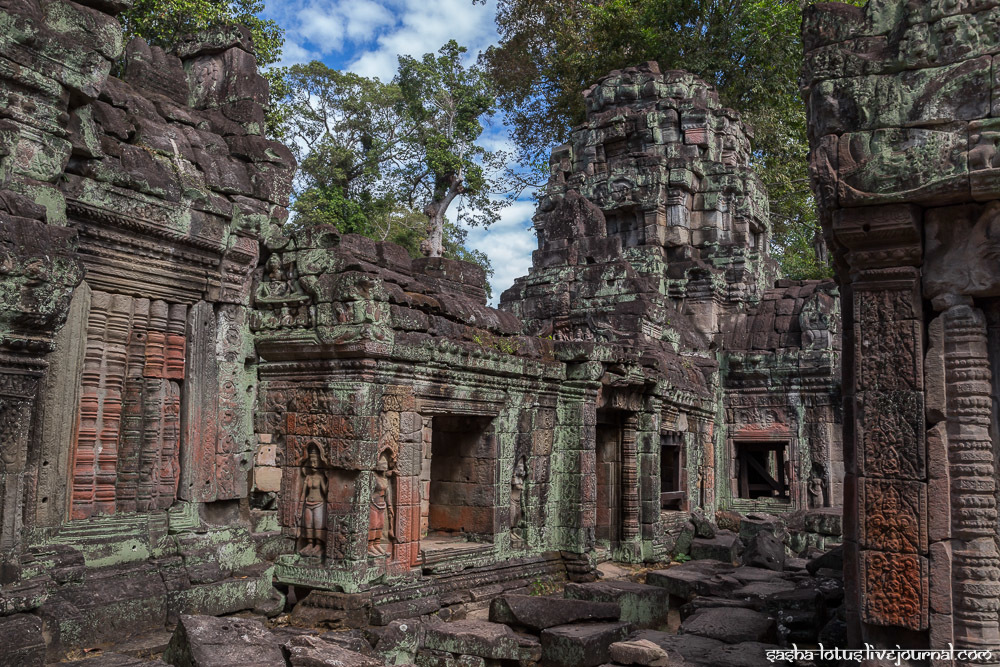 Preah Khan is a rectangle the sides 800 and 700 meters, along with archaeological finds on its territory allowed the scientists to conclude that the temple in the heyday of the Khmer civilization was not only large settlement, but even the capital for a while. 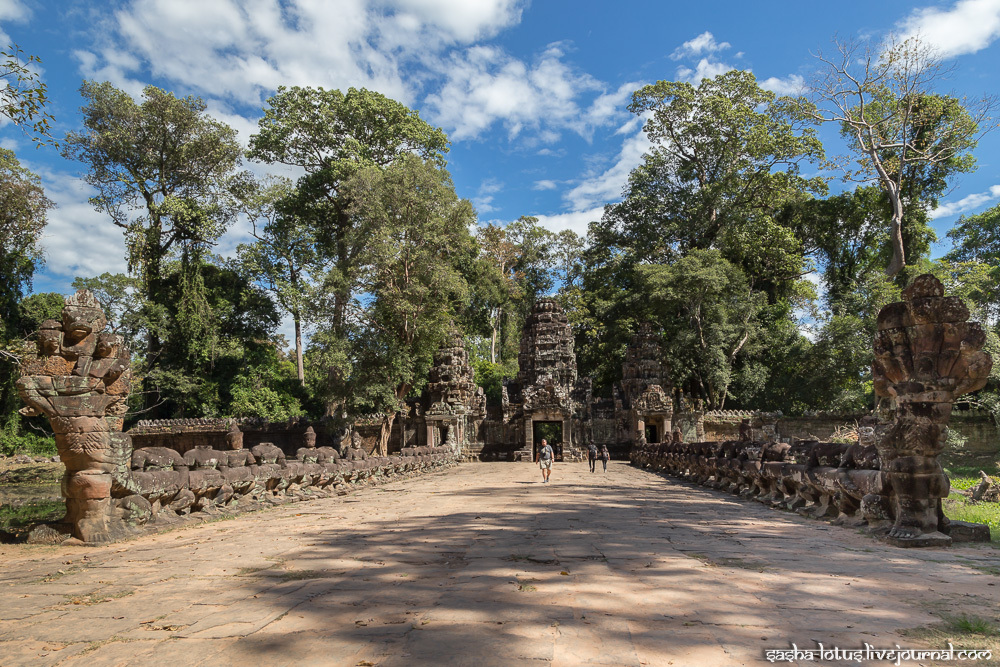 Even the name of Preah Khan, meaning "holy sword", sometimes translated as "the holy city of victory", referring to the victory of the data in this place of King Jayavarman VII over the invading aggressors from the now defunct Champ state. 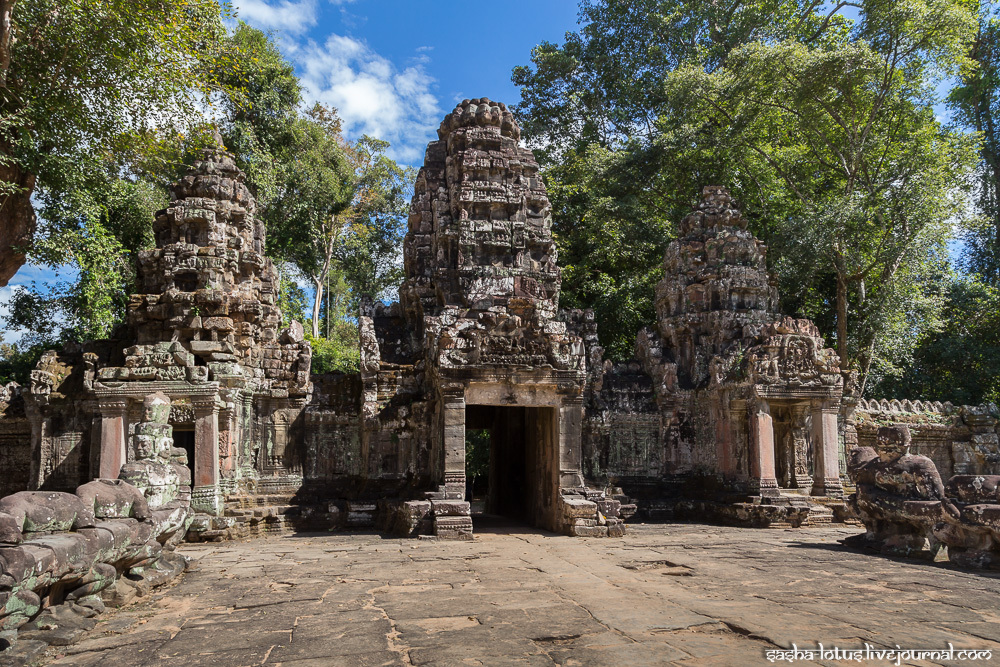 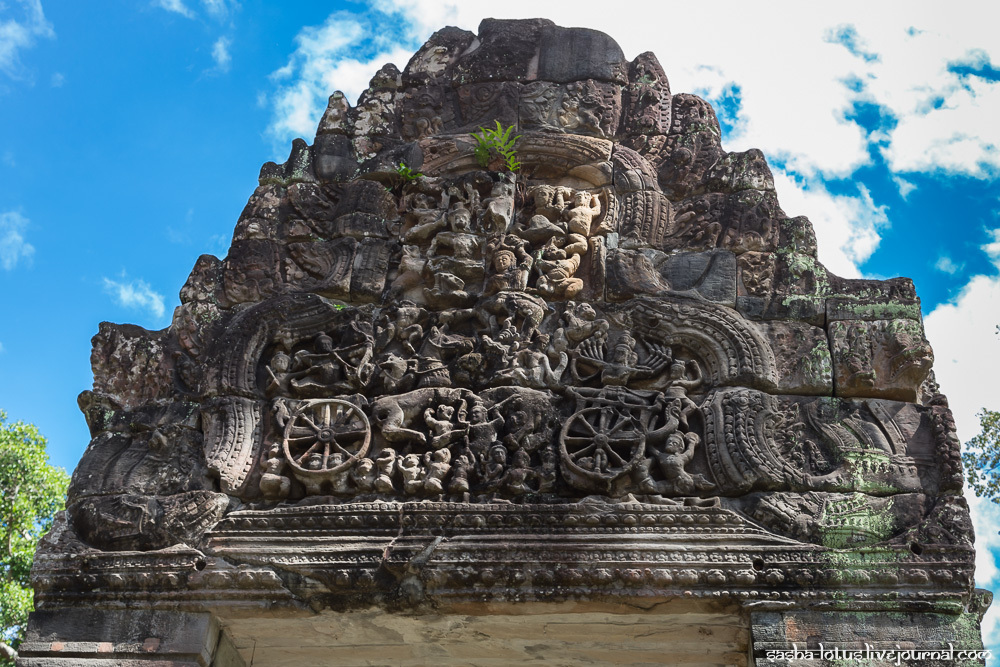 A distinctive feature of the Preah Khan of the other temples of Angkor is the lack of high pyramidal buildings, mostly one-story building, the sanctuary and galleries occupy a large part of the vast area of the temple. 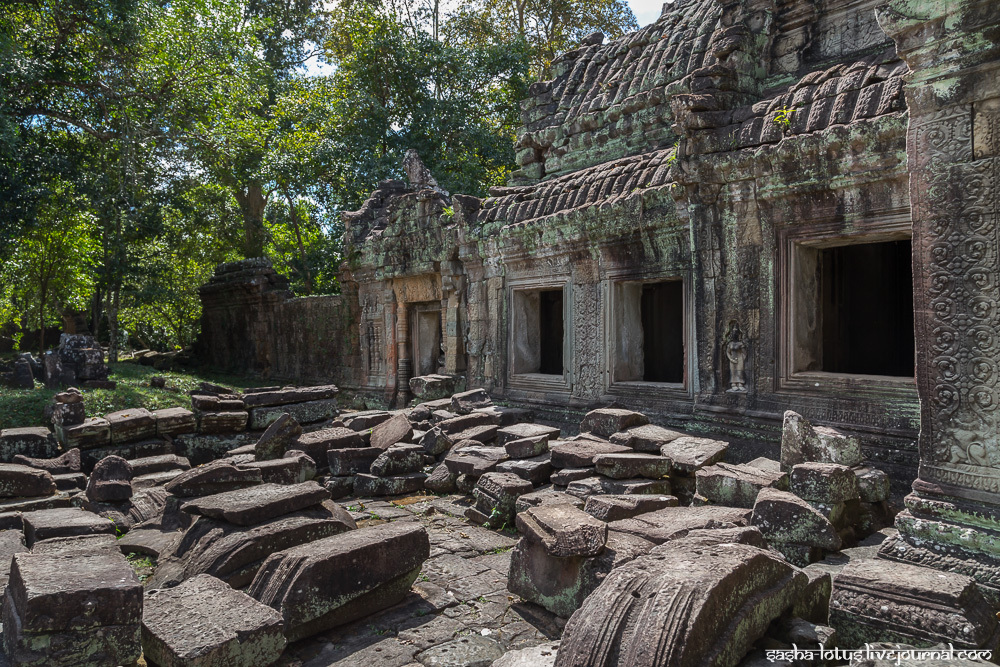 Once it was located, and a Buddhist monastery and university with more than 1,000 teachers, do not forget about the 430 shrines of Hindu deities. 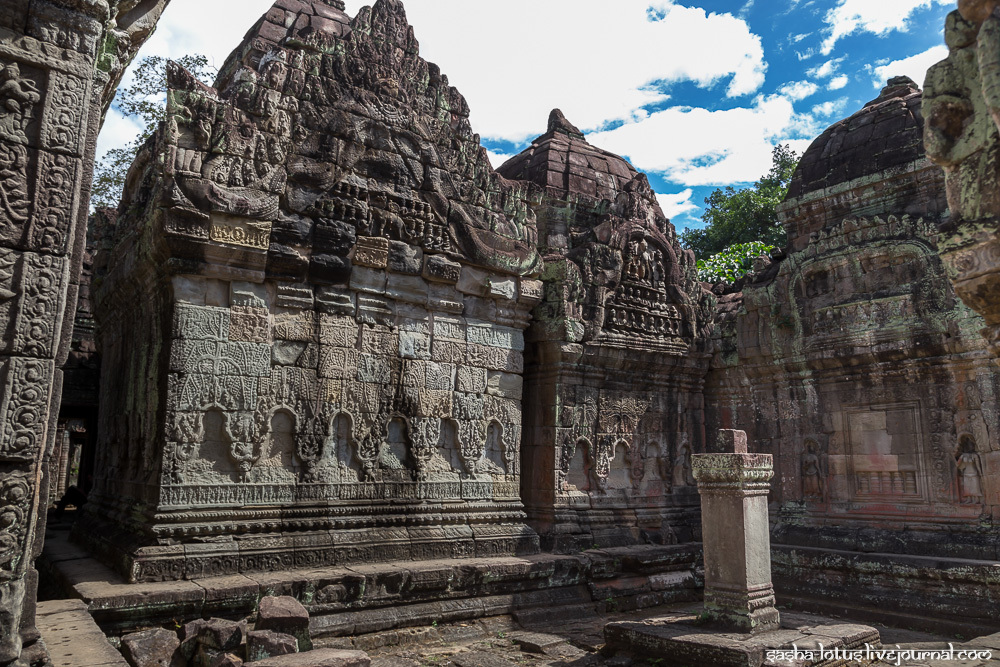 In Khan Preak lived about 100 thousand inhabitants, but looking at the ruins and wandering through the back streets of galleries and courtyards, is now hard to imagine. 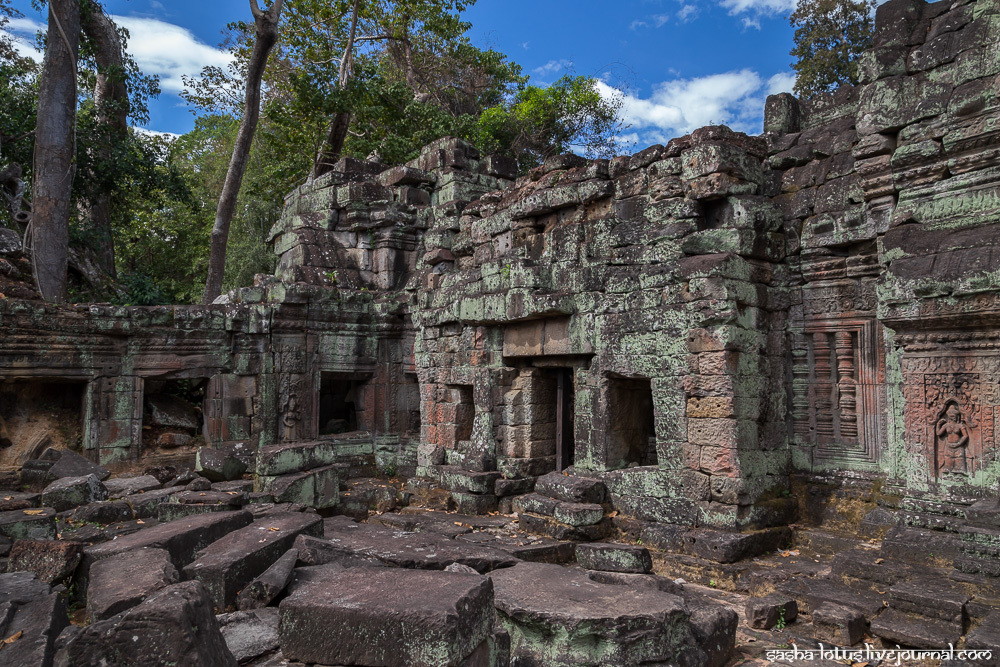 Adds color and mystical temple complex of red-green hue of its walls.

When I posted a picture of Preah Khan in instagram during the trip, I wrote that it resembles an illustration of fantasy book. Oh, Indiana Jones or Lara Croft is quite possible to feel yourself, especially when you hear the endless chatter is not Chinese, but only the rustle of leaves in the wind. 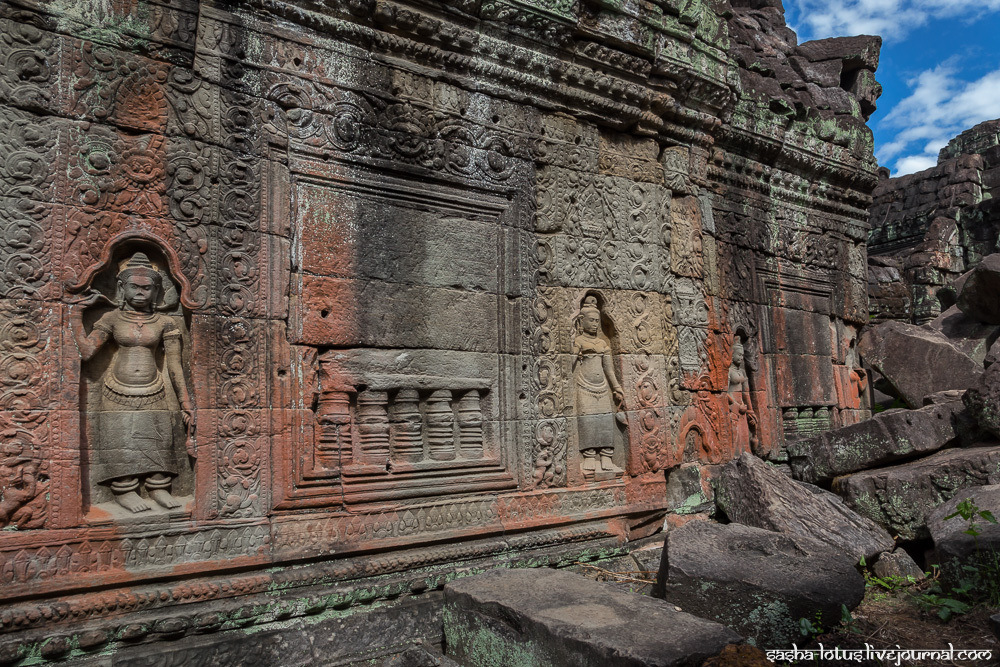 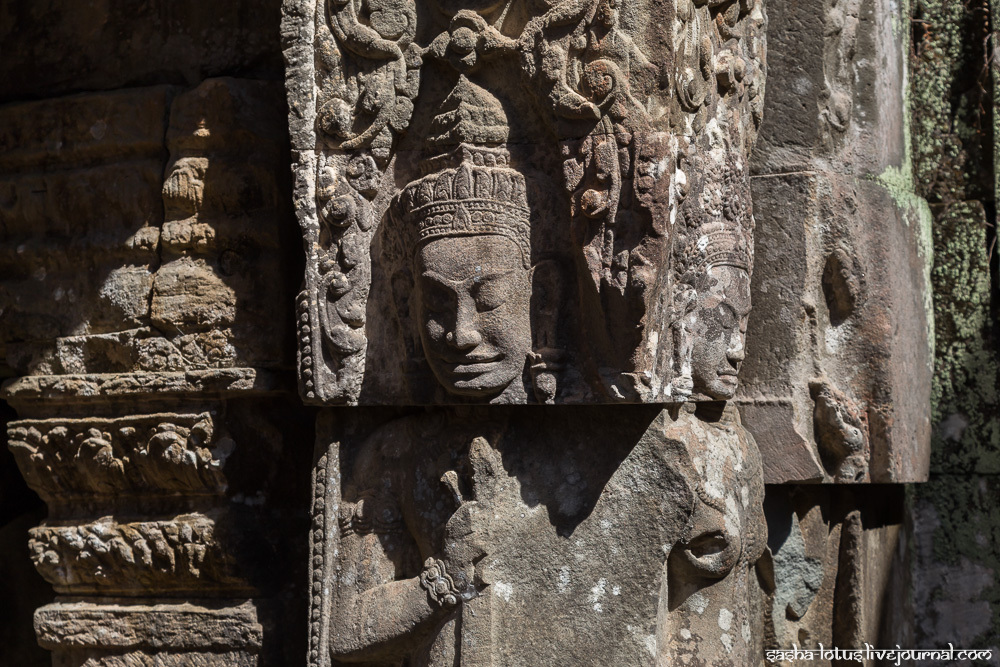 Absolutely fantastic place to mentally travel back in time. Rejoices the eye, the soul rests. There can and should meditate. Here you can arrange excellent photo shoot, it would wish and props. 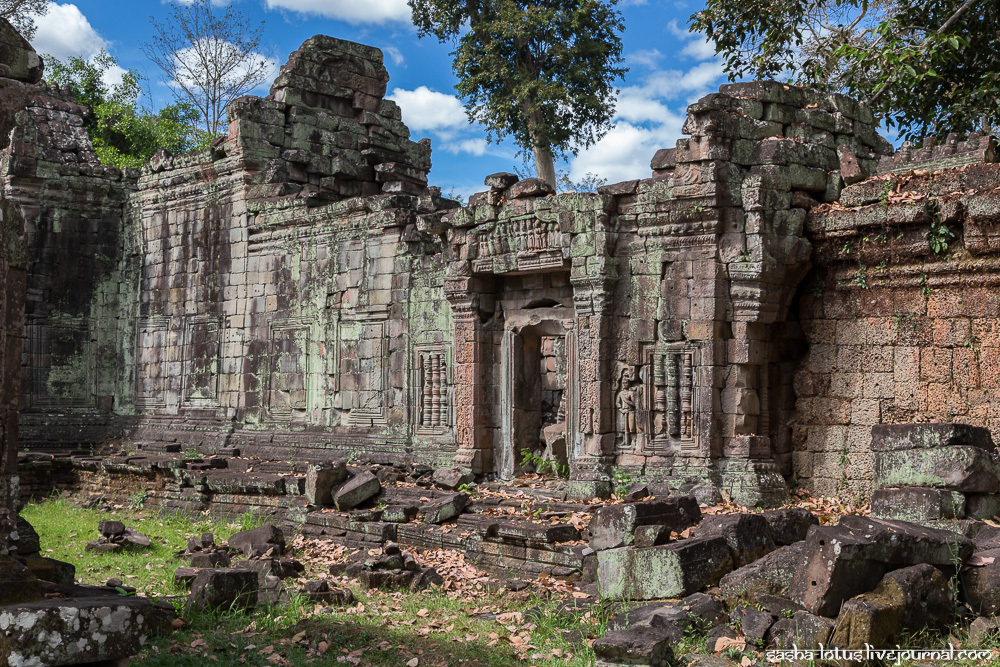 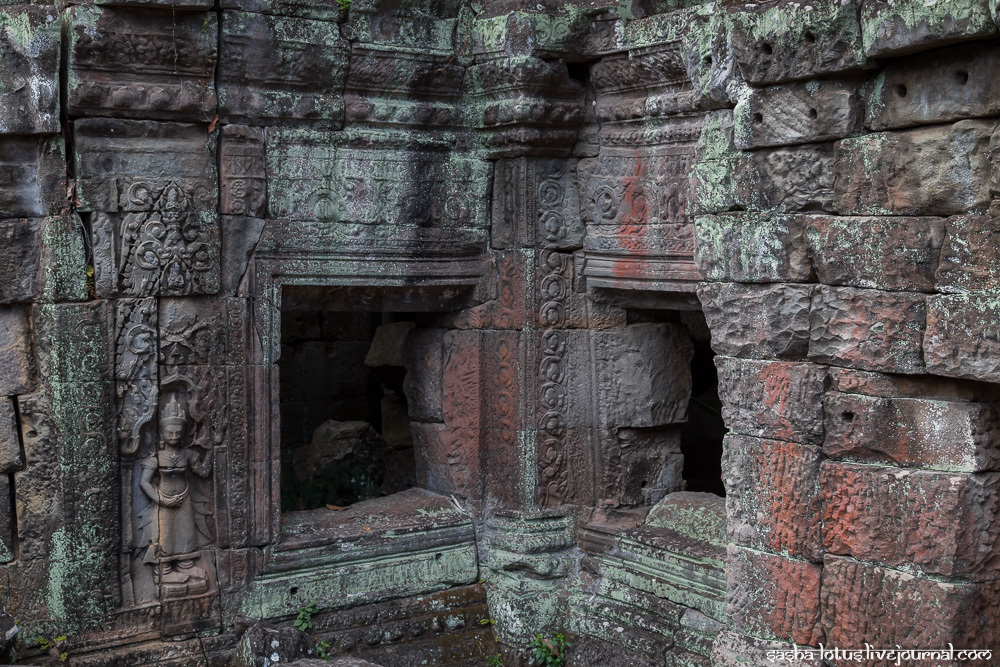 On the preserved bas-reliefs can be seen as images of Hindu deities and scenes of battles and royal life, and of course, women polubozhestv apsaras. 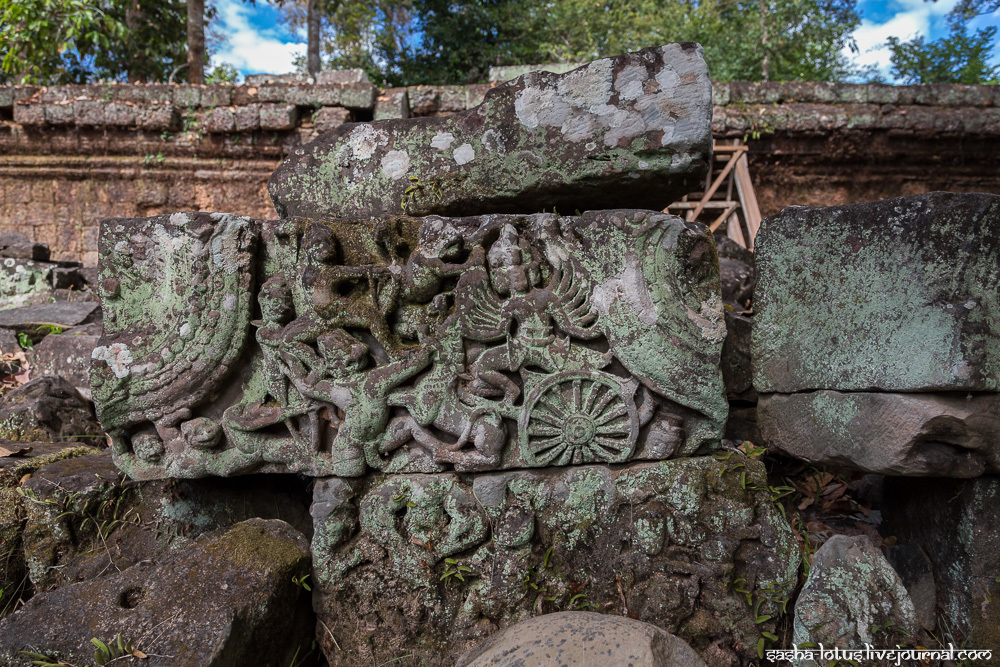 Archaeologists decided not to try to recreate the former appearance of the temple-city, only cleared the area from the Preah Khan absorbed jungle, removed from the galleries free-standing statues, to avoid accidents. 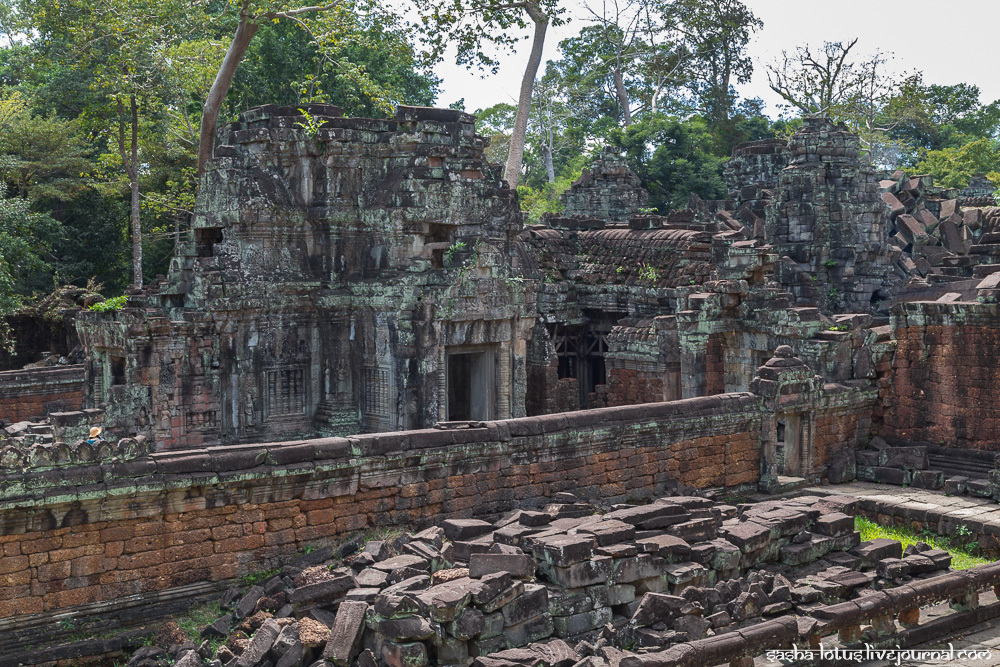 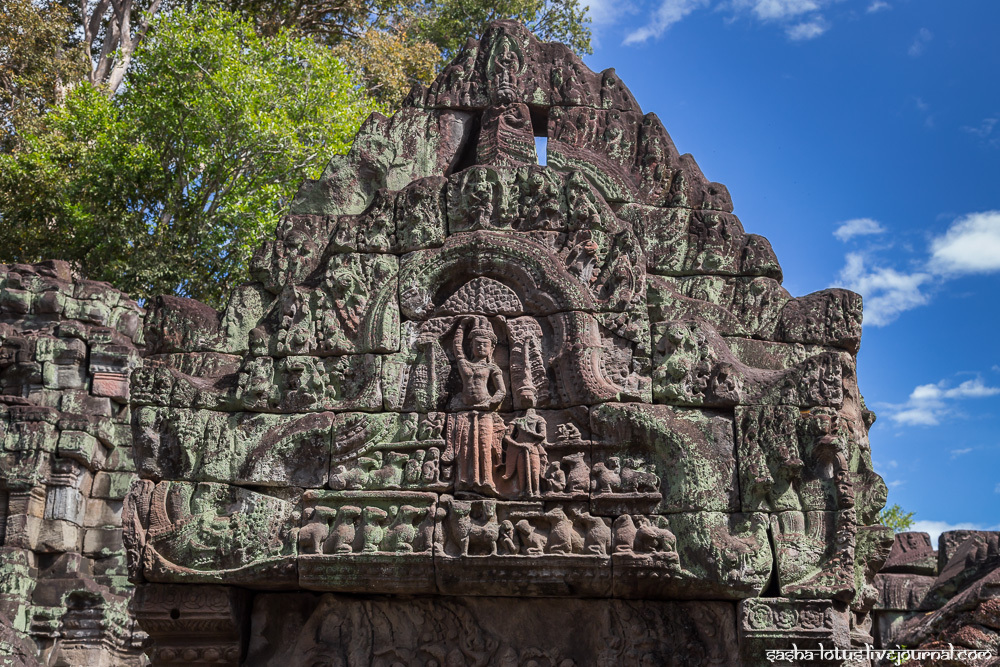 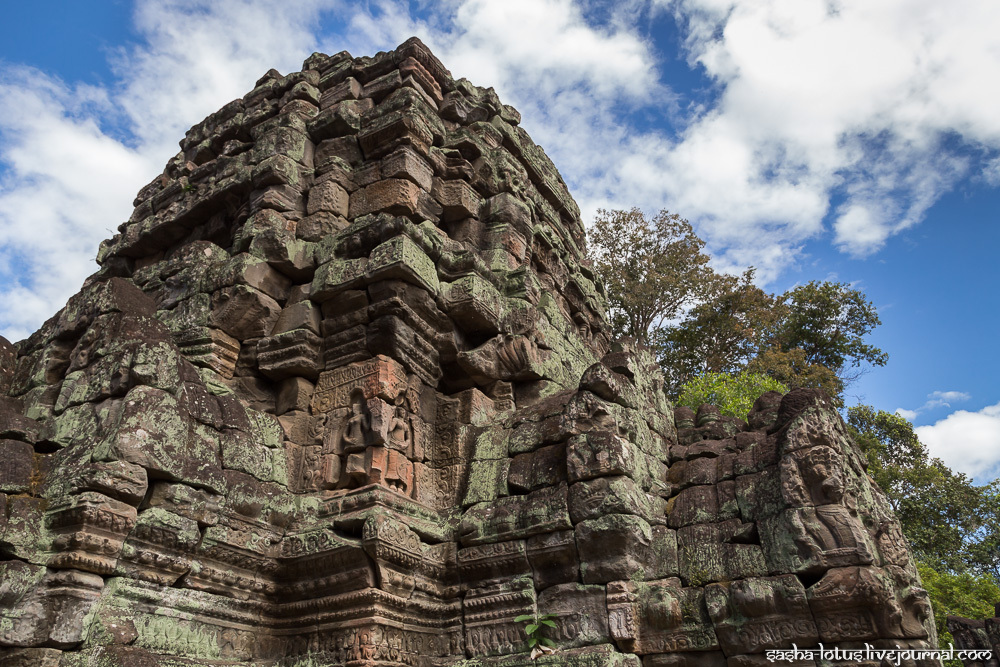 If we imagine that inside there was dense vegetation, this is exactly what would occur before researchers Preah Khan. 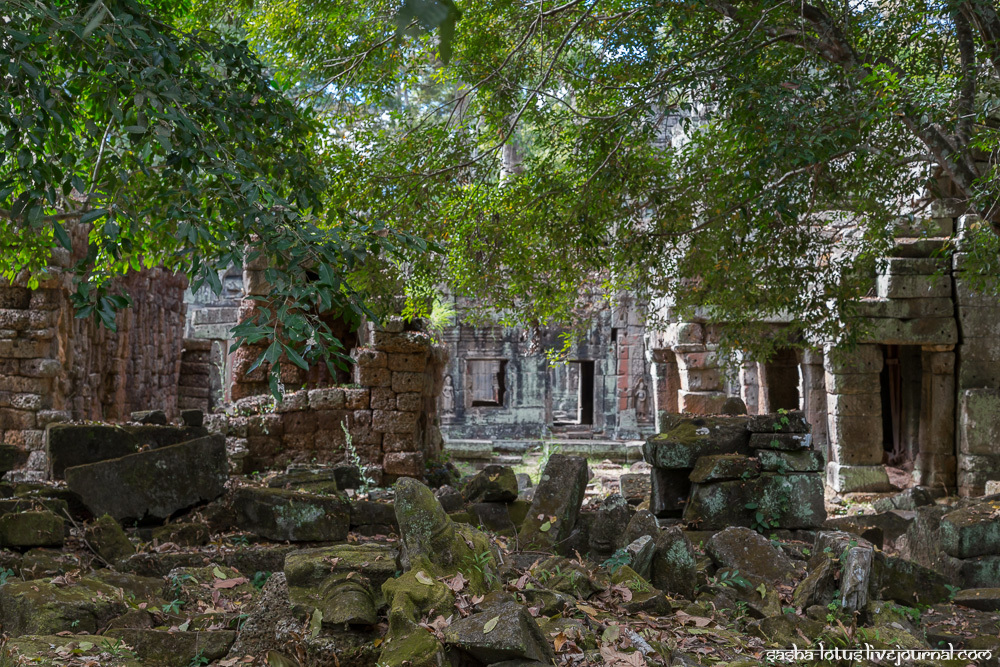 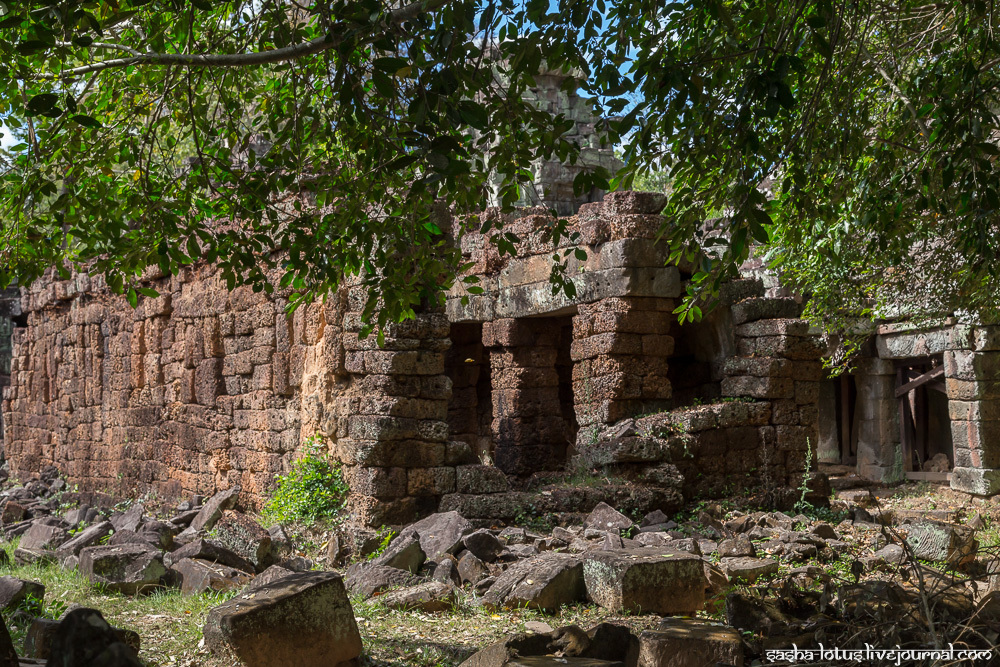 The network can find a lot of detailed descriptions of each of the temples, their plans, directions to specific buildings and shrines. But let us leave these details to deeply interested in the Khmer civilization and scientists. There is nothing more boring than to wander through Angkor with a guide. Maps with the names of the temples is enough. 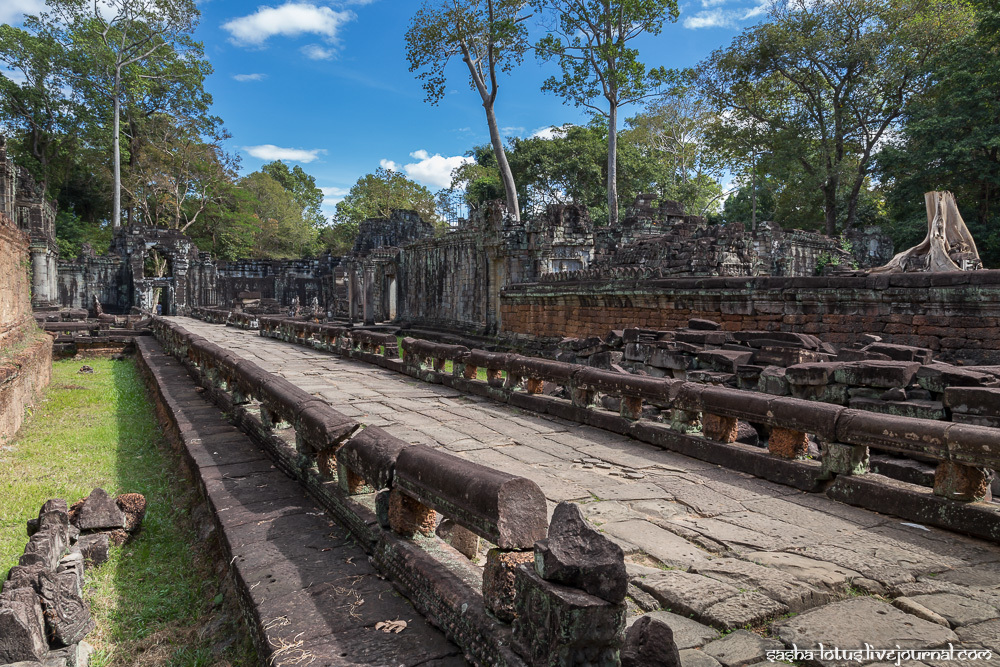 Appointment of an unusual and atypical Angkor two-storey building with columns and have not been established. 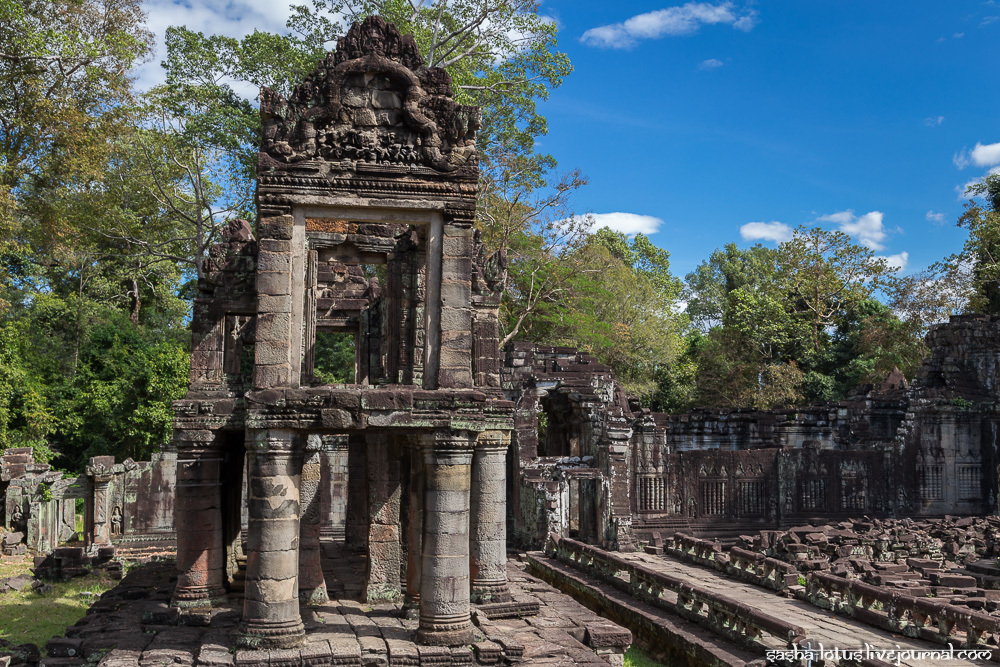 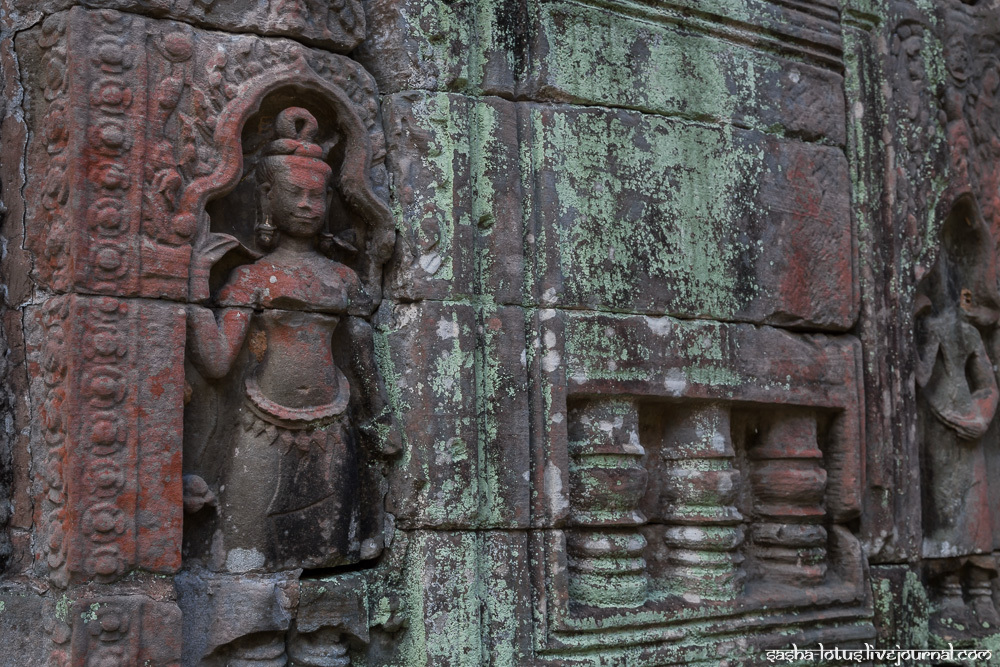 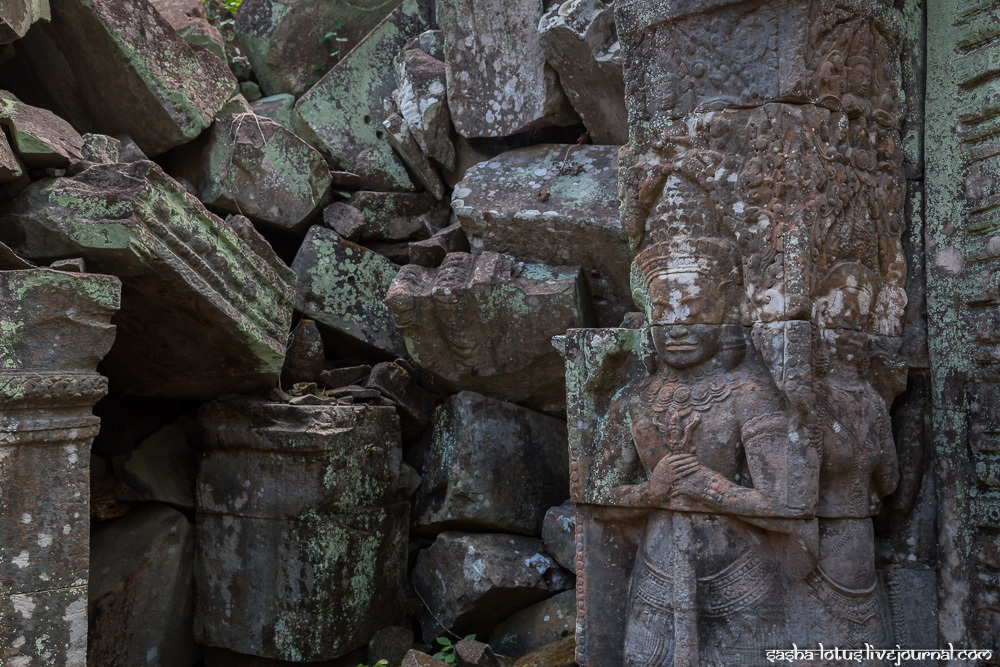 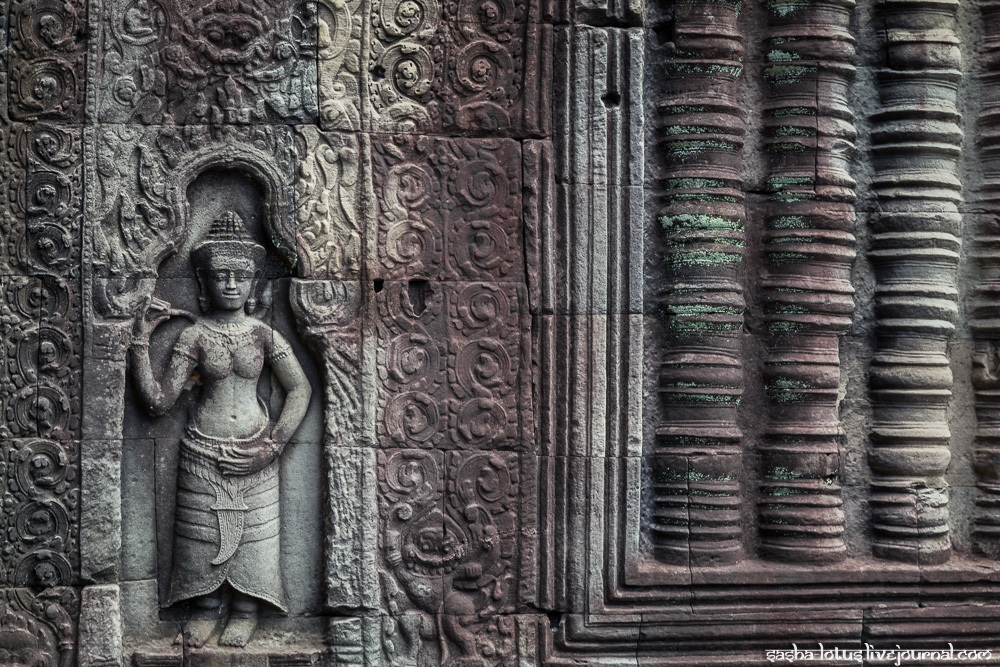 The Preah Khan also wanted to stay more on longer, but in front of us waiting like little separate sanctuaries, as well as large and well-known temples, such as the well-known thanks to the film all about the Tomb Raider Lara Croft temple of Ta Prohm built with entwined tree roots. 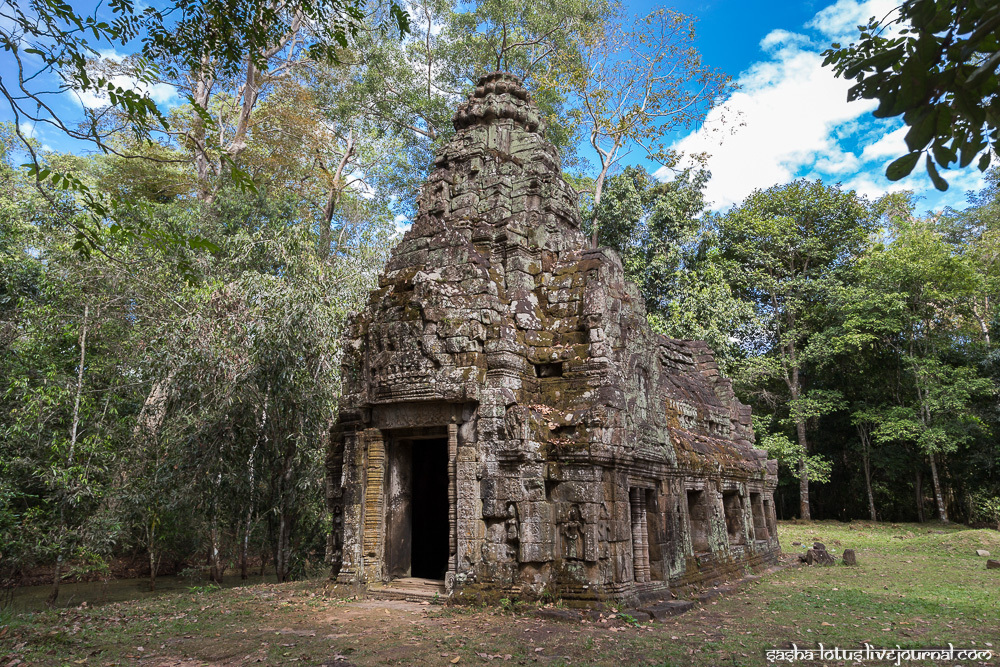