AdBlock detected. Site operation may be disrupted due to running AdBlock. Please disable it for this site.
Home Stories Bolivia

One day in the same area

Now it's hard to believe, but three weeks of our lives flying in Bolivia! The country, which has always been for us a great mystery, opened every day some new facet of his new piece of previously hidden - becoming a little more understandable and at the same time even more mysterious .. It amazes dumbfounded and absolutely everything - the ineffable beauty of nature the instantaneous change of scenery, dizzying heights and, of course, the locals! For me, they will always remain the main jewel of Bolivia. But with them something and I want to start getting to know this incredible country and unspeakable ... 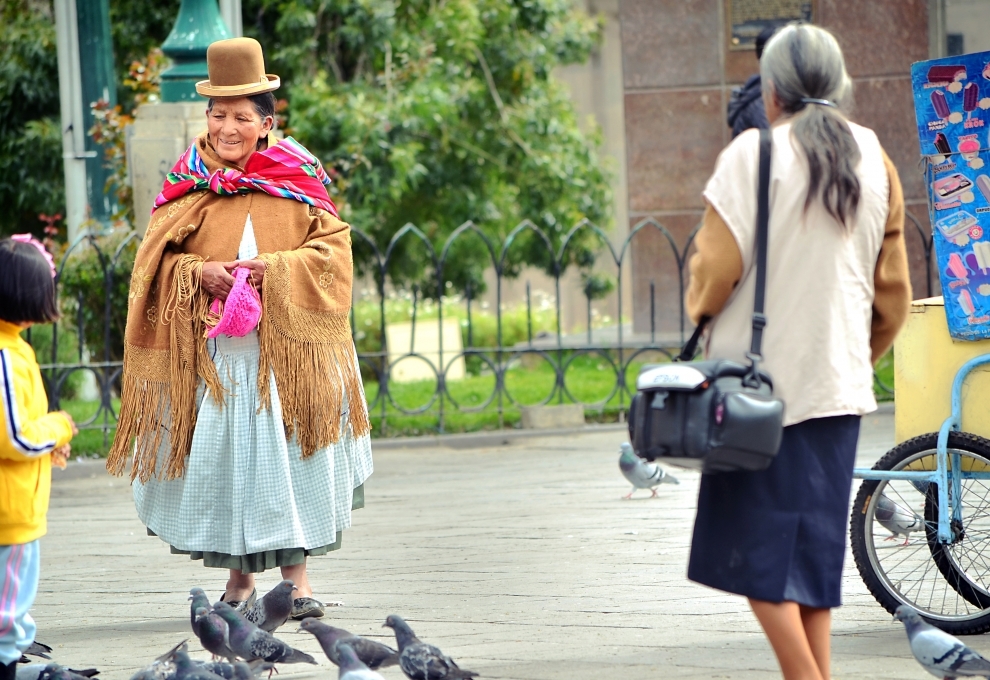 To get acquainted with the Bolivians closer, simply come to the main square of any Bolivian town - in the afternoon, two o'clock. Be assured that you will certainly find there the brightest representatives of the urban population, from grandmothers to spreading the most colorful skirts and colorful shawls, finishing modern businessmen and biznesvumenami in strict office clothes and with the indispensable folder with documents in hand. Especially big this spread will be here - in the main square of actual capital of Bolivia - La Paz! 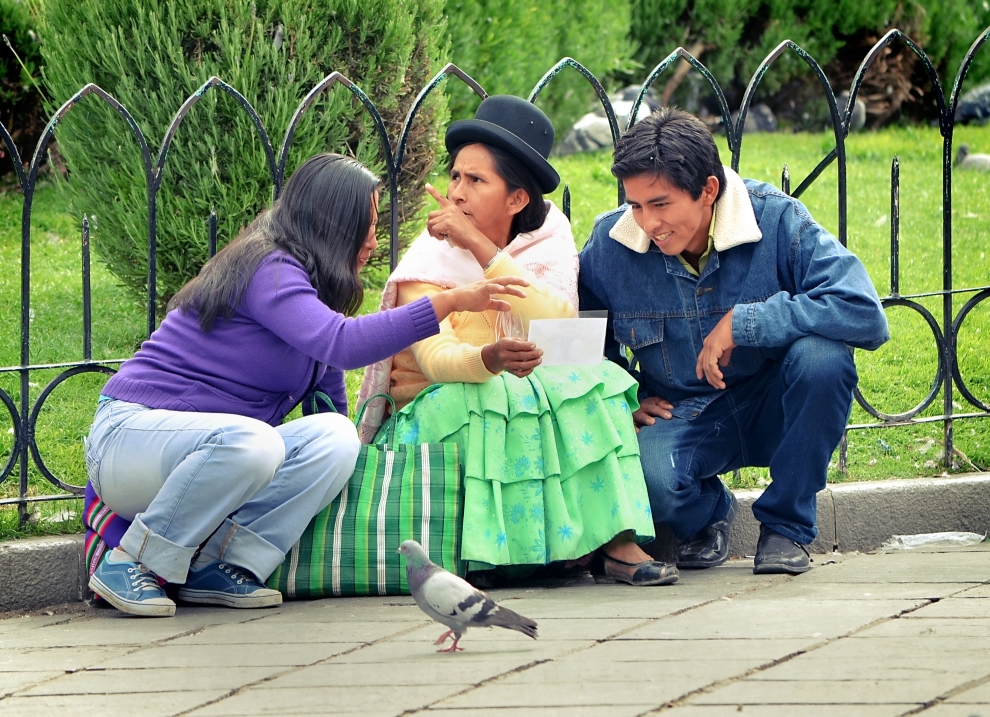 At the Metropolitan Plaza Murillo (as in many areas of Bolivia), the main human activity is aimed at ... the pigeons! Yes, not only Rome to Venice boast rolls over these ambiguous creatures density per square meter! It seems that the pigeons once and for all chosen major area of ​​La Paz - whether for its dizzying heights (no joke - as much as 3600 meters above sea level!), Or for packets of corn sticks, which are sold on every corner ..;) 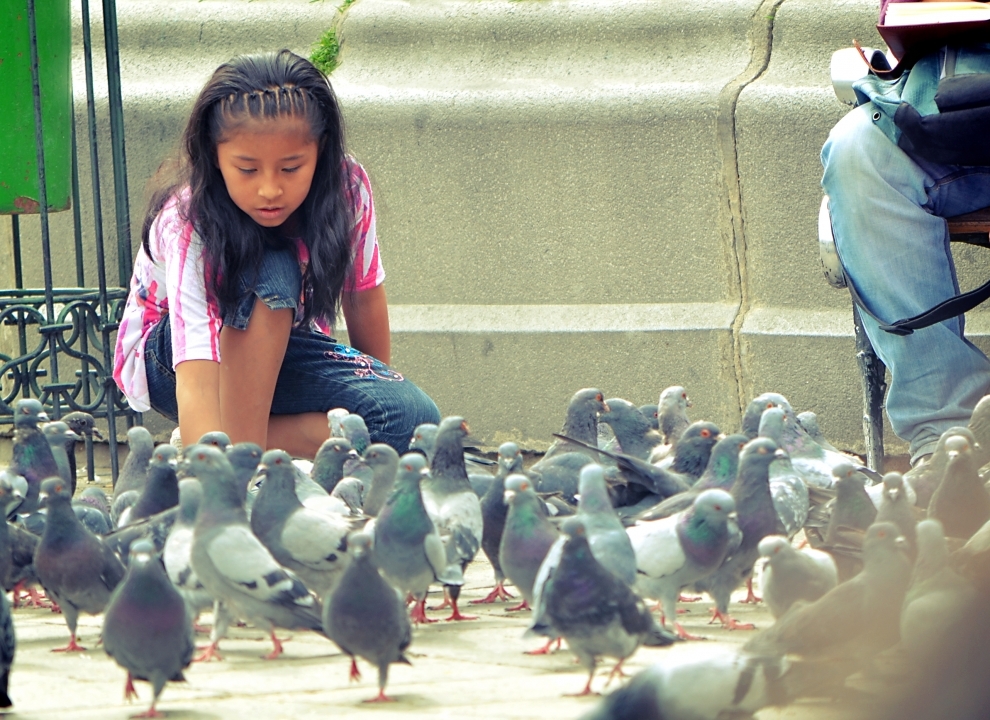 Relationships with feathered swallow all built differently .. Someone is perfectly common language with them and immediately deserves their respect .. 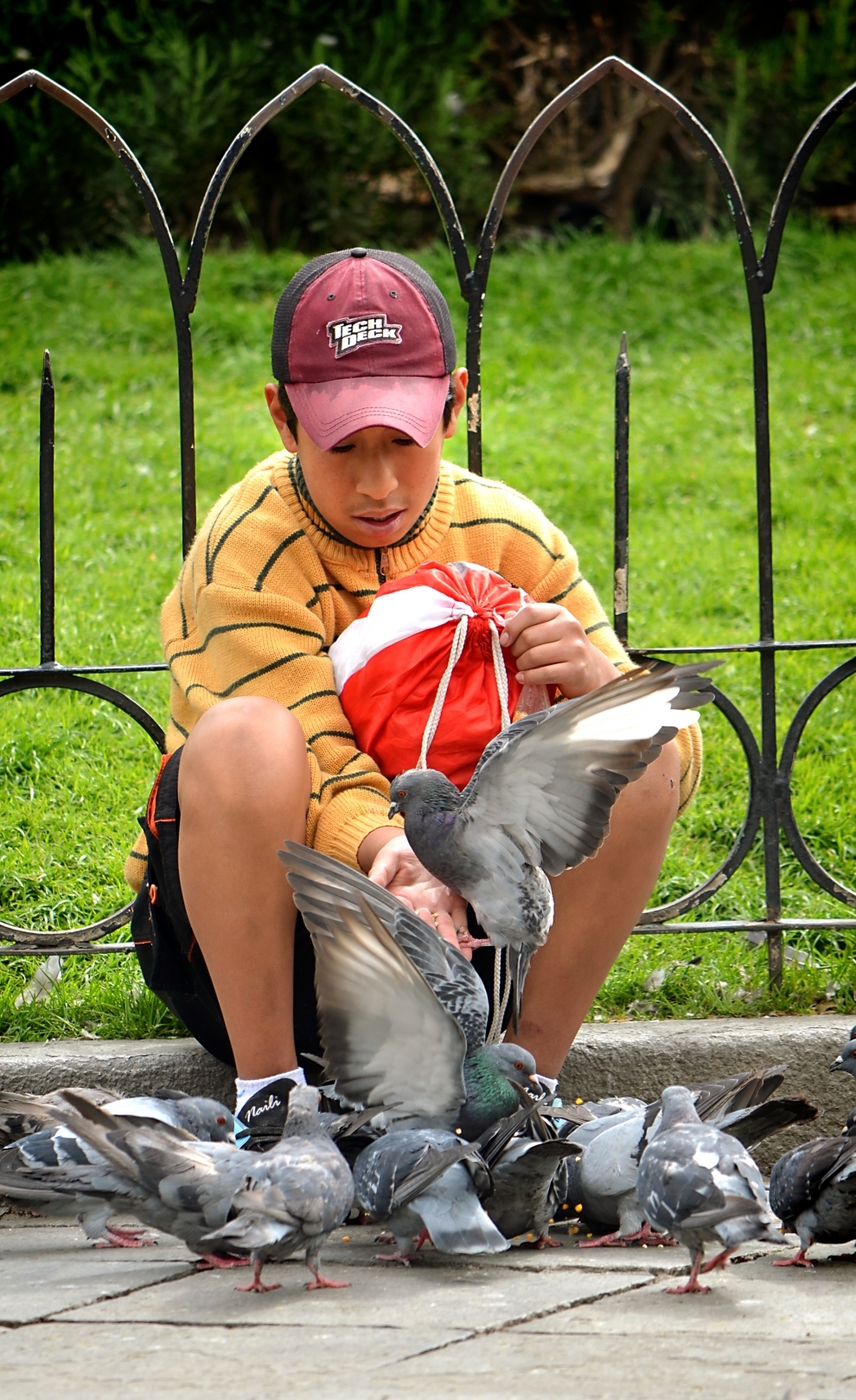 ..kto is acting more cautiously, slowly trying to ingratiate himself .. 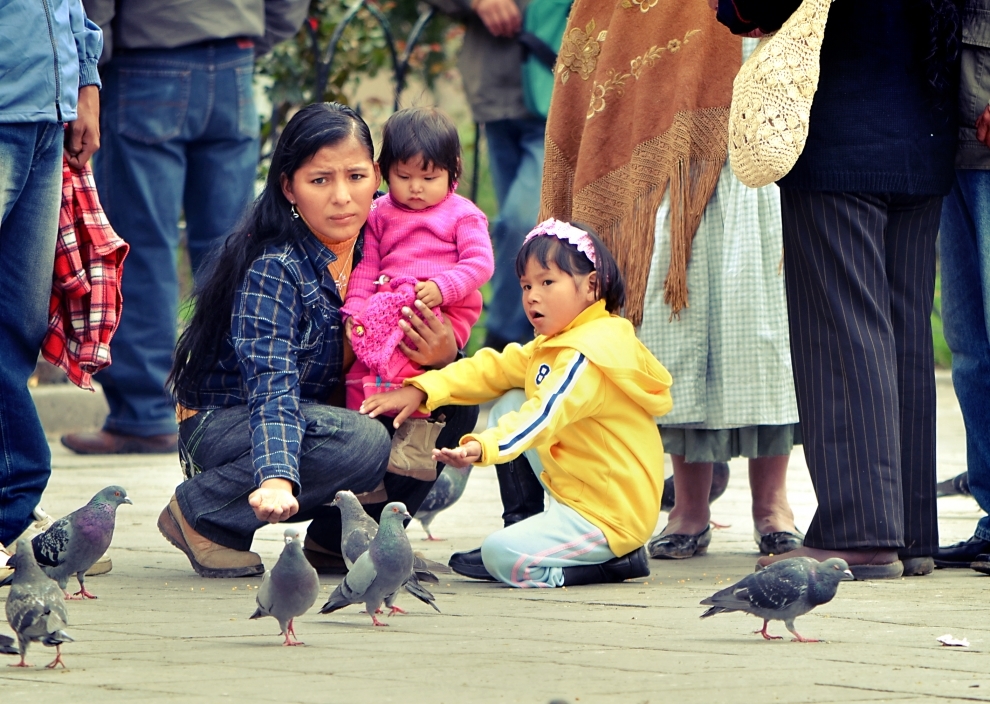 ..a someone clearly perplexed what to expect from such numerous neighborhood! ;) 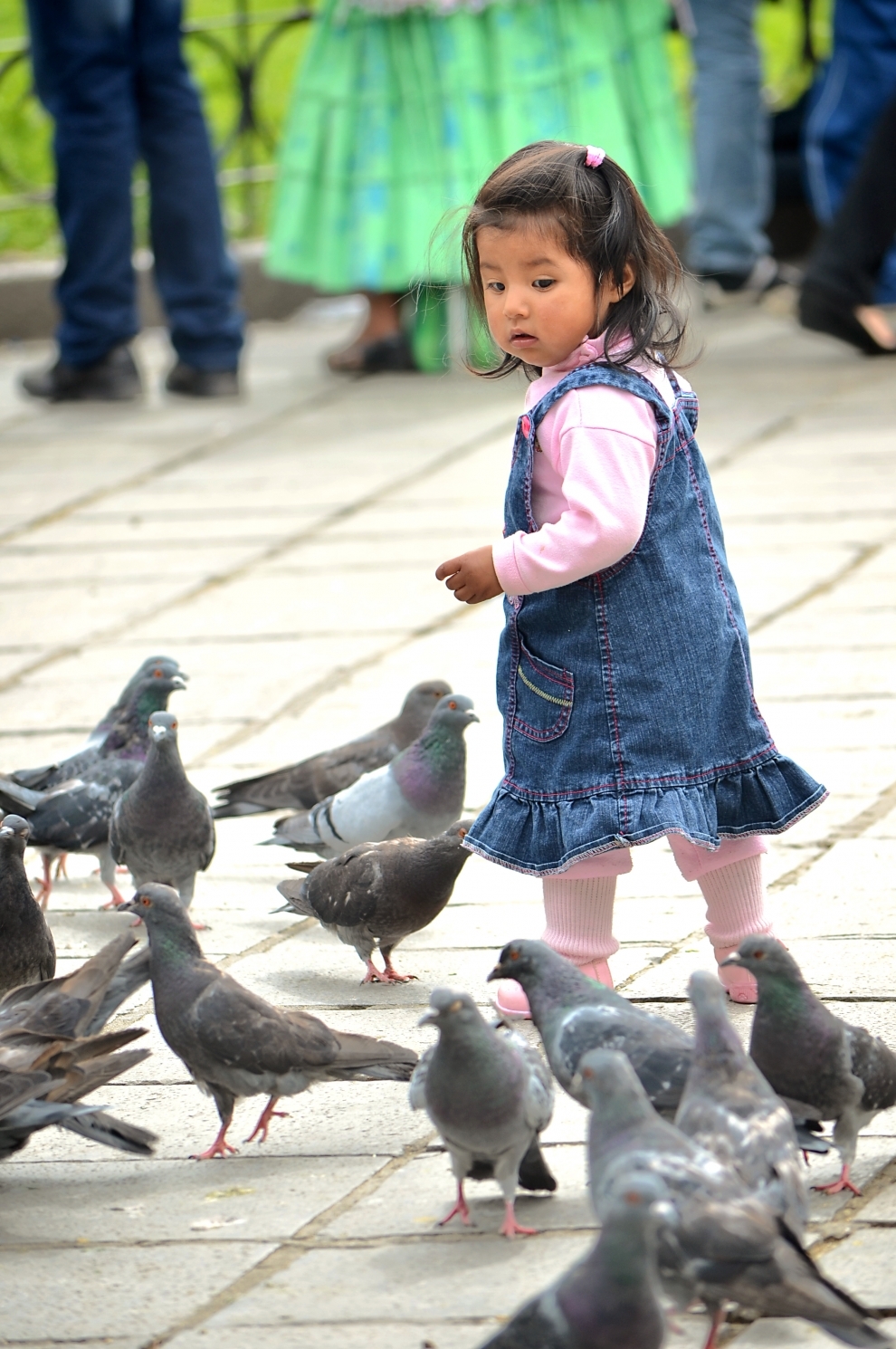 But some seem to just not notice a thick carpet of pigeon and continue to go about their daily chores and worries - most of which are invariably associated with the absorption of food. 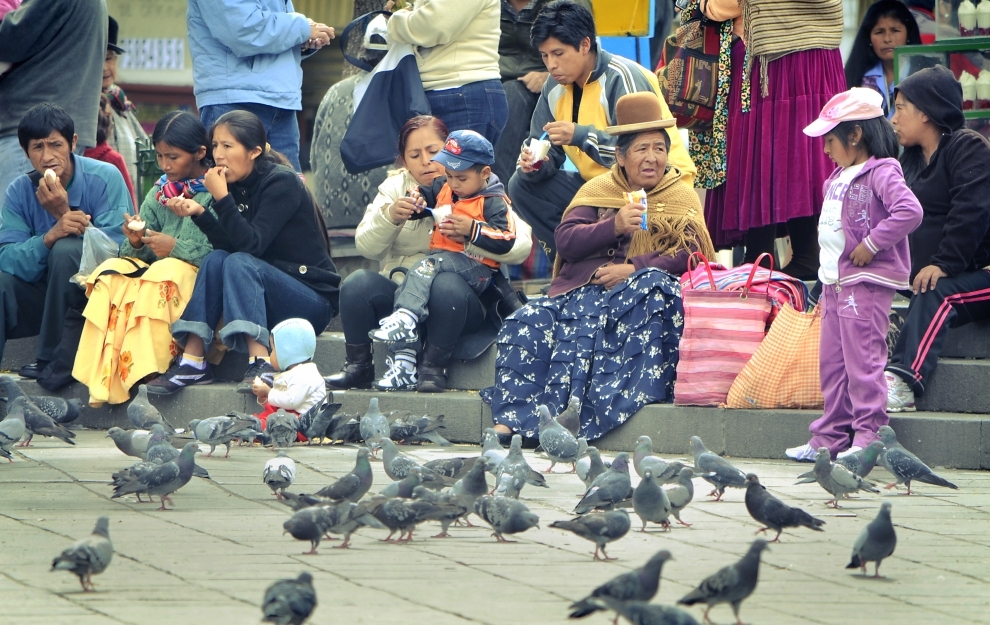 I also always in such areas like the most just sit and watch. For a smooth swing the crowd for a combination of colors sailing past each other outfits for individuals, emerging suddenly from a common flicker. 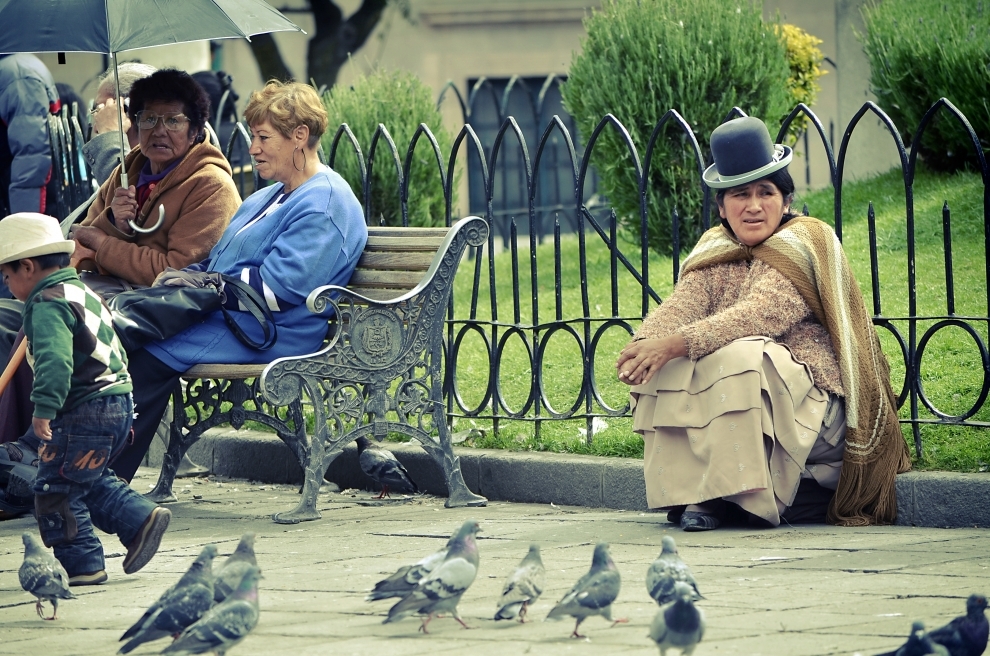 Watching people in La Paz can be infinite. Most often look attracts vacationers two categories - kids and grandmothers! Children in Bolivia do well, very much (or simply they are the first catch the eye? ..) - And quite small, and saddled his dad, mom and refuses to move on their own .. 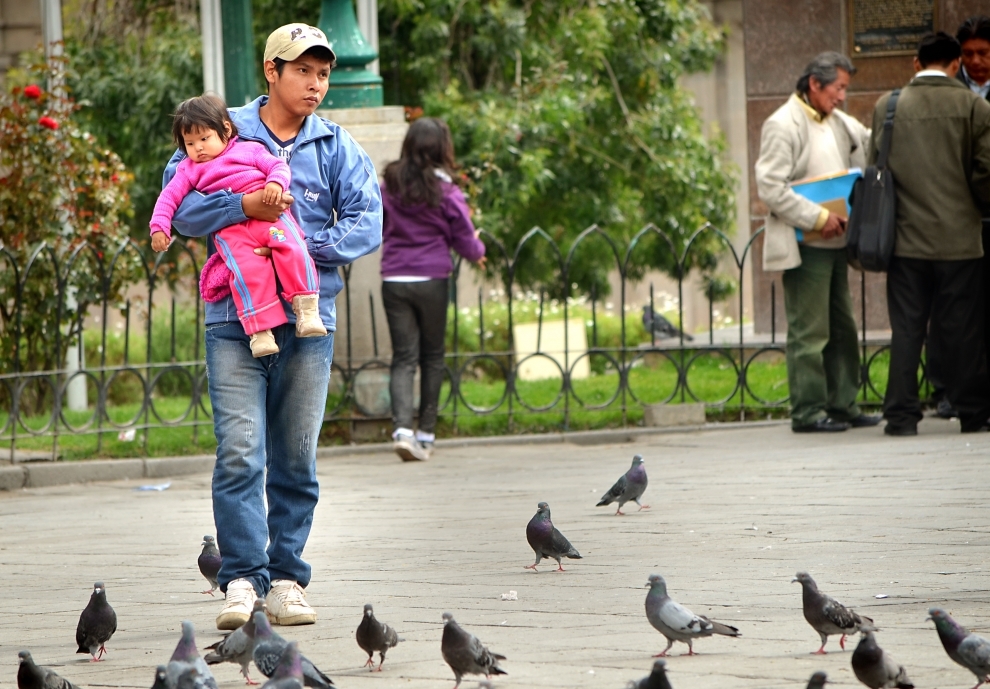 ..and frantically clinging to her mother's hand and humbly Wandering after her .. 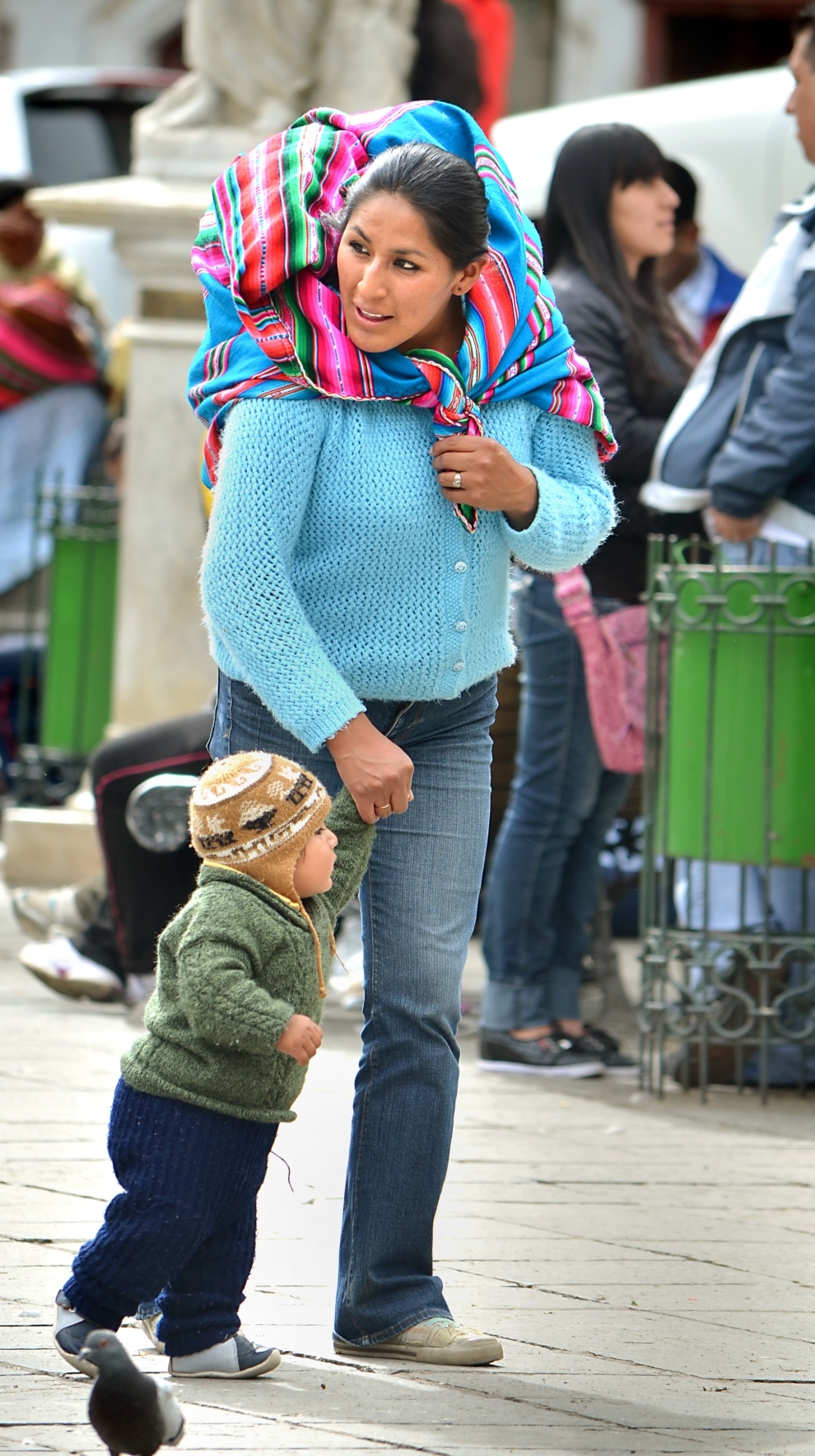 ..and patiently and graciously allowing mom to clean under the hoop unruly strands .. 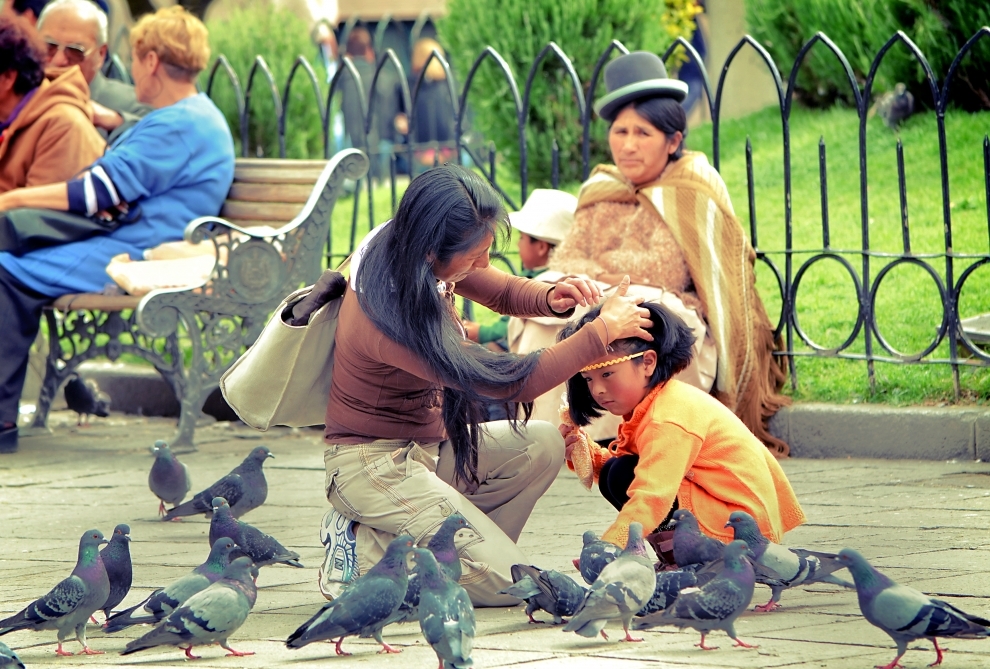 ..and quite a self-contained, have excellent stay on his feet and perfectly regular chewing sweets without any help! ;) 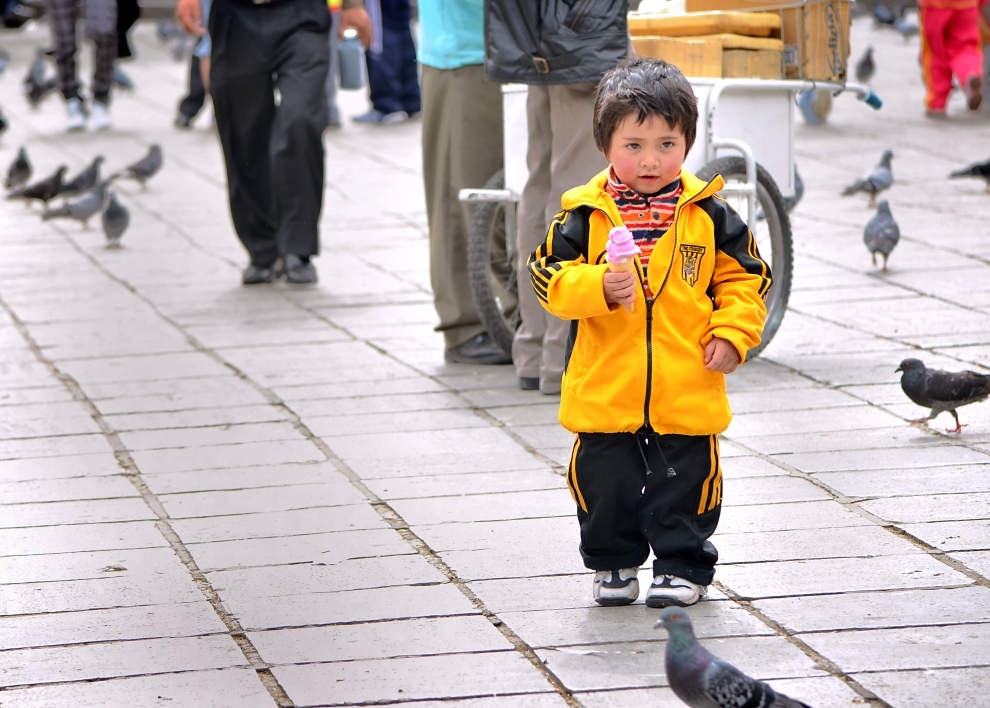 About Bolivian grandmothers general conversation special. Coming out for the first time on the streets of the Bolivian city, I thought that he was in some kind whether Hollywood movie, or transmission Nacional Geographic - about ancient civilizations. Such grandmothers in reality do not exist, just can not be! 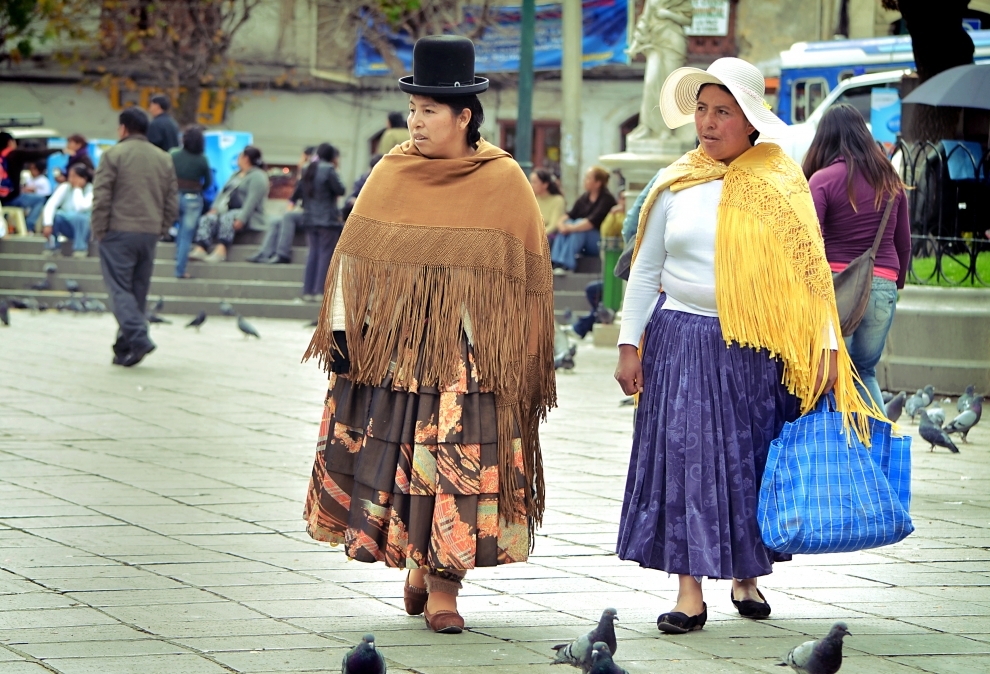 The fact that a significant part of the population of Bolivia are local Indians - mostly Aymara and Quechua. Those who perfectly learned Spanish and settled in the city, called "Cholo". I must say, in spite of its Hispanic and the city (even the capital!) Residence - they did not change their roots, lifestyles and clothes. The first thing you have to have any self-respecting fashionista Bolivian - a lush luxurious skirt with multiple tiers and ruffles. If the material will fall sparkling and shimmering - all excellent! ;) 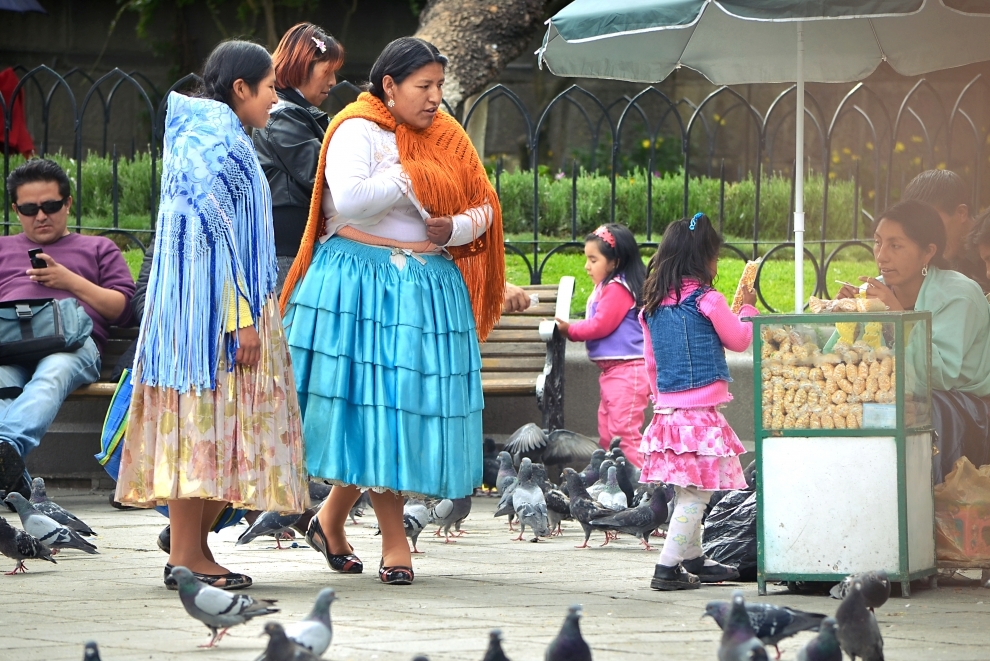 The second necessary element - of course, the hat! In this part, the local ladies attire generally give themselves the absolute will and show off to each other in all its glory. Depending on the nationality and status of this can be anything you want, from elegant to trendy straw hat bowler! 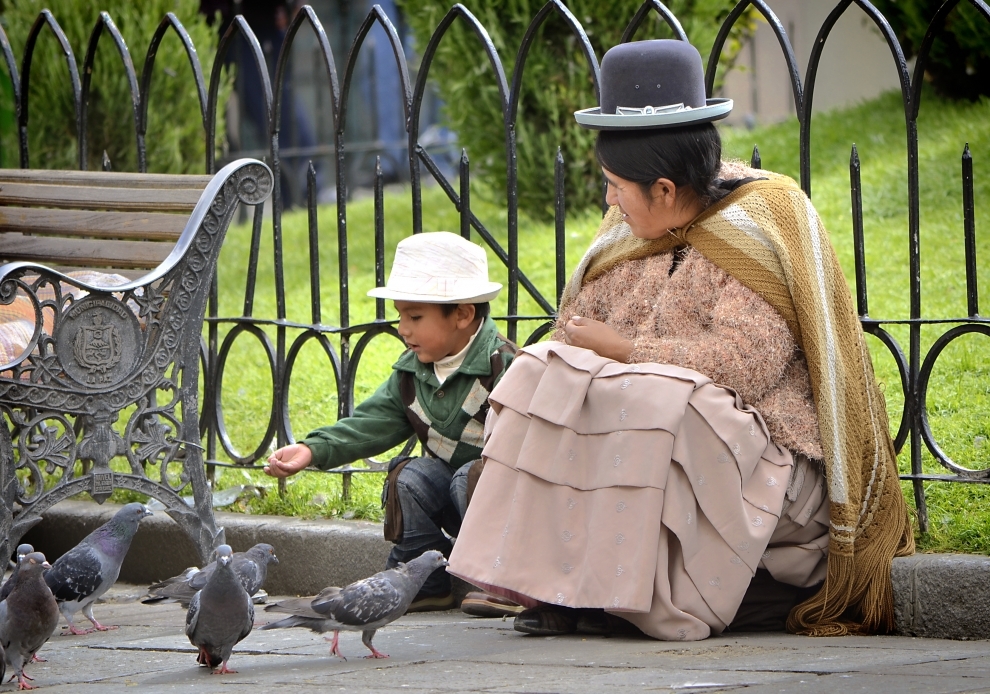 Finally, rainbow, bright and attract attention colorful shawl that local ladies deftly tied on the shoulders and are for him the most that neither is a multi-purpose use - of carrying a variety of goods to a certain kind of child sling backwards! ;) 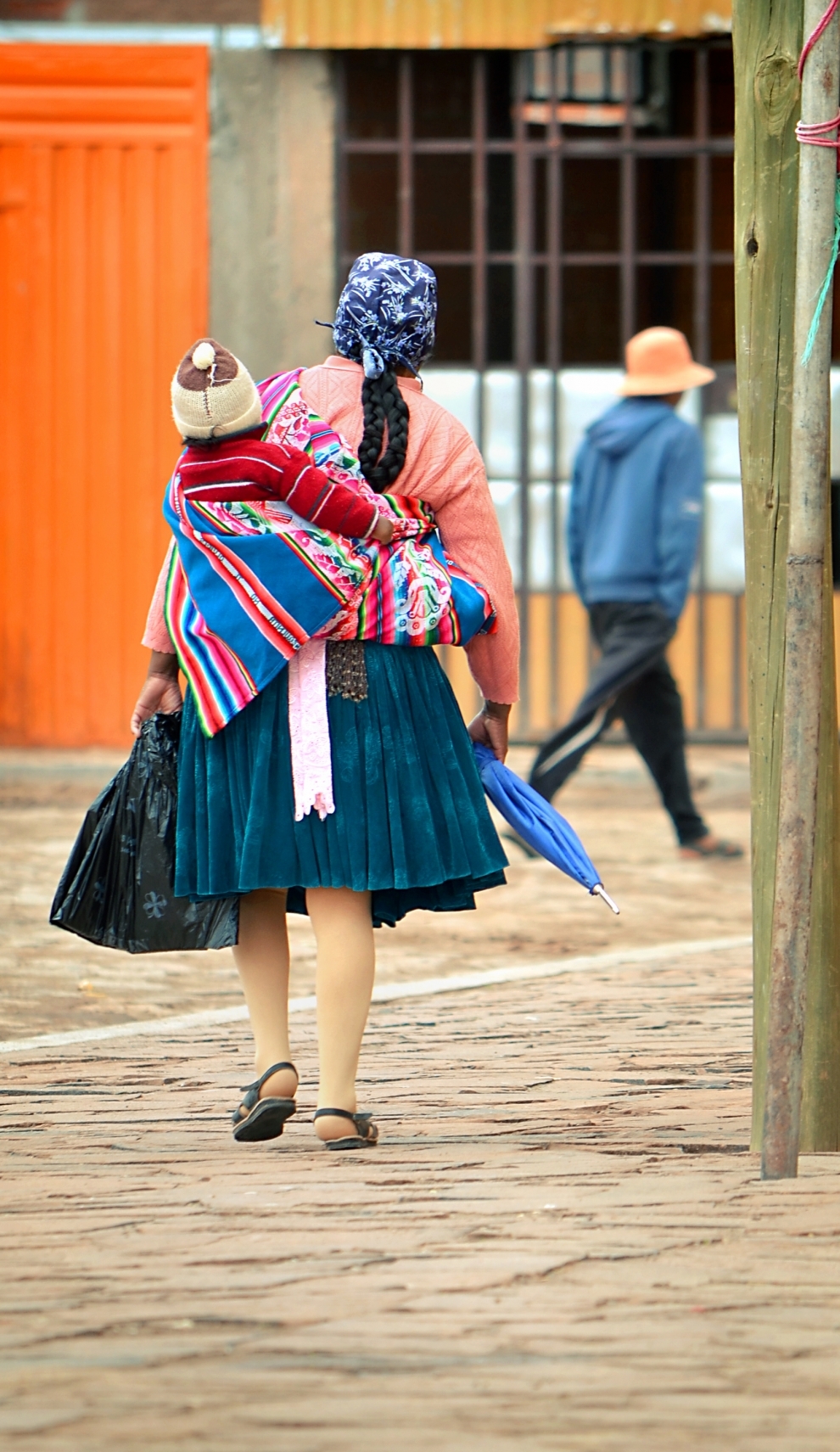 But of all that we met that day in the square passers me more all sunk into the soul somehow here this grandmother. Thoughtful, noble, elegant - as if he had just emerged from the decisive shot of some old-old movie .. It came suddenly, slowly passed through the area, ignoring the noisy bustle and endless pigeons, and just quietly disappeared into the crowd - whether midday mirage, or simply a modest vendor empanadas from the central market ... 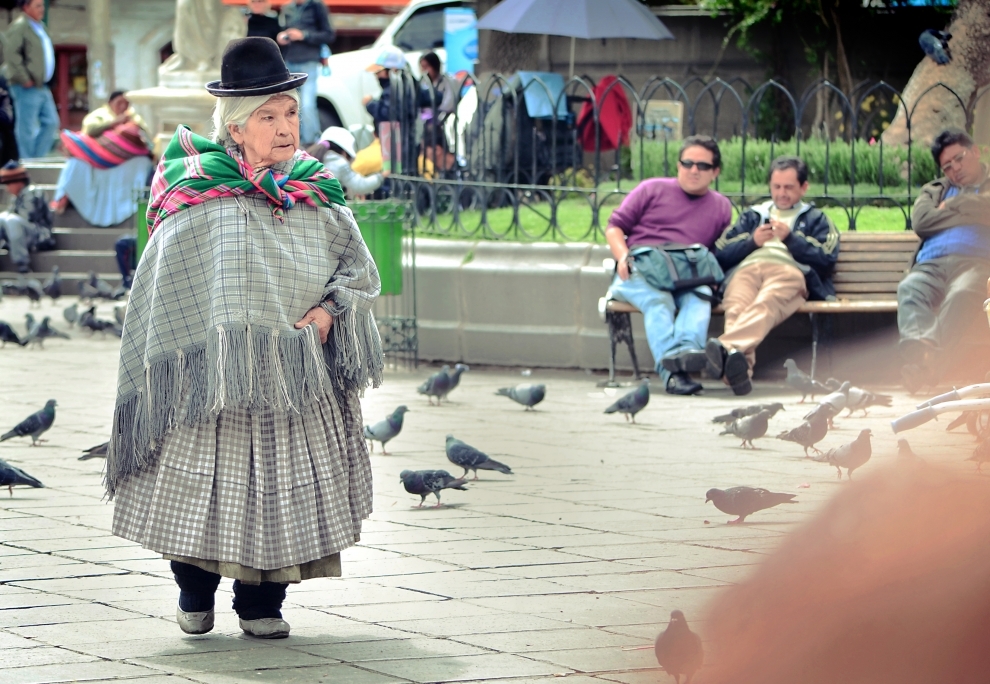