AdBlock detected. Site operation may be disrupted due to running AdBlock. Please disable it for this site.
Home Stories Argentina

Ushuaia - the southernmost city of the world 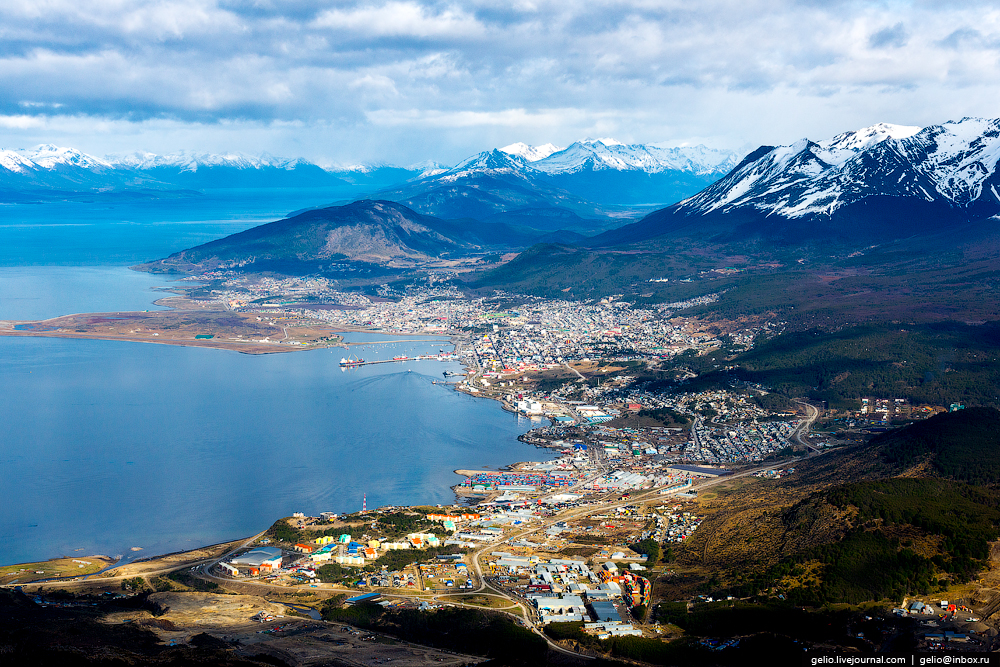 Residents of a small Argentine town of Ushuaia call their homeland "land of the corner." Others tend to call this locality "Gateway Antarctica". Visiting Ushuaia almost inevitable in several cases: if you are planning to visit the icy continent of the Earth; If the envelope to South America on a ship; if you just like to travel to exotic places, because Ushuaia - the southernmost city of the world.

1. Ushuaia - a free economic zone and a major tourist hub. There compactly arranged with the airport runway on the edge of the bay, and the sea port. From here, all cruises to Antarctica. This is to rest and resupply ships go, envelopes South America. 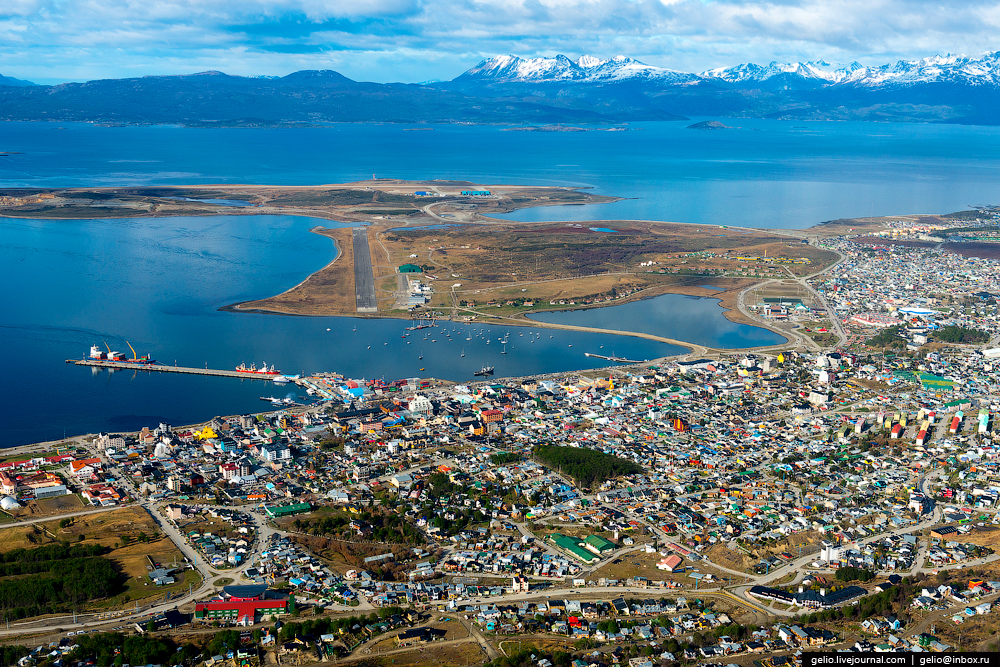 2. One of the main and central streets of Ushuaia - San Martin Avenue. Named in honor of the Argentine national hero General Jose Francisco de San Martin, who at the beginning of the XIX century was one of the leaders of the War of the Spanish colonies in Latin America. Buildings prospectus, as well as the whole town, different bright, but the eclectic architecture. Here you can find motifs from around the world, which is not surprising, because Argentina - a country of migrants. San Martin Avenue stretches for half a kilometer parallel to the coast and resembles an open-air shopping and entertainment center - it employs a huge number of shops, restaurants and even a casino. 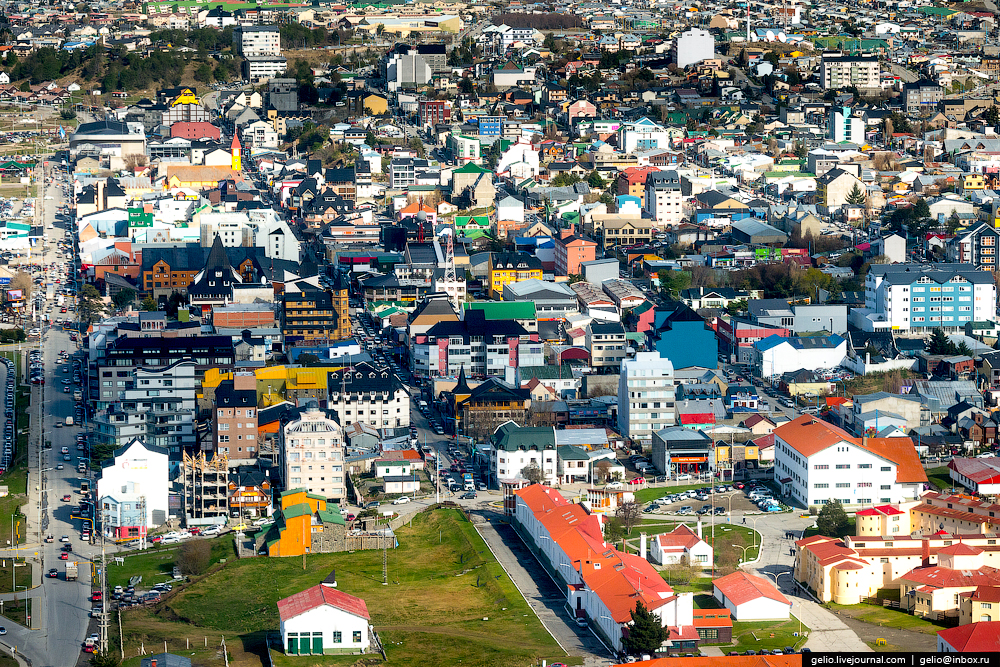 3. Founded in 1884, the city is located on the shores of the Beagle Channel (named after the ship on which Charles Darwin went around South America). 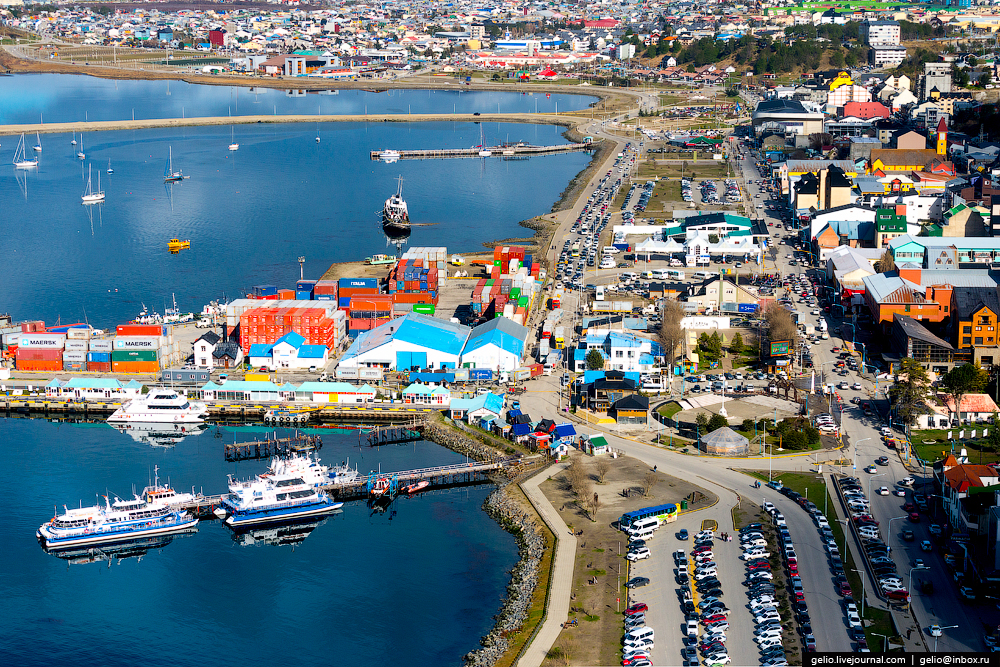 4. In the Port Ushuaia are moored pleasure boats and catamarans. Sightseeing boat trips through the strait - a traditional part of the local "cultural program". 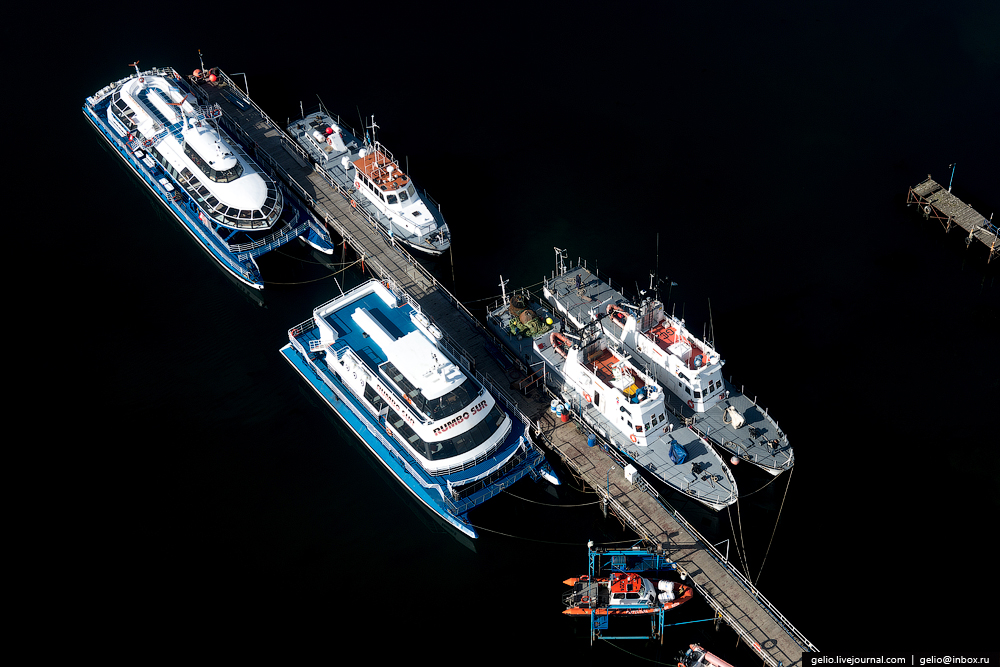 5. chosen by Ushuaia and owners of private yachts. Often, making a detour on the way to Antarctica, and here come the big prestigious offshore yacht. 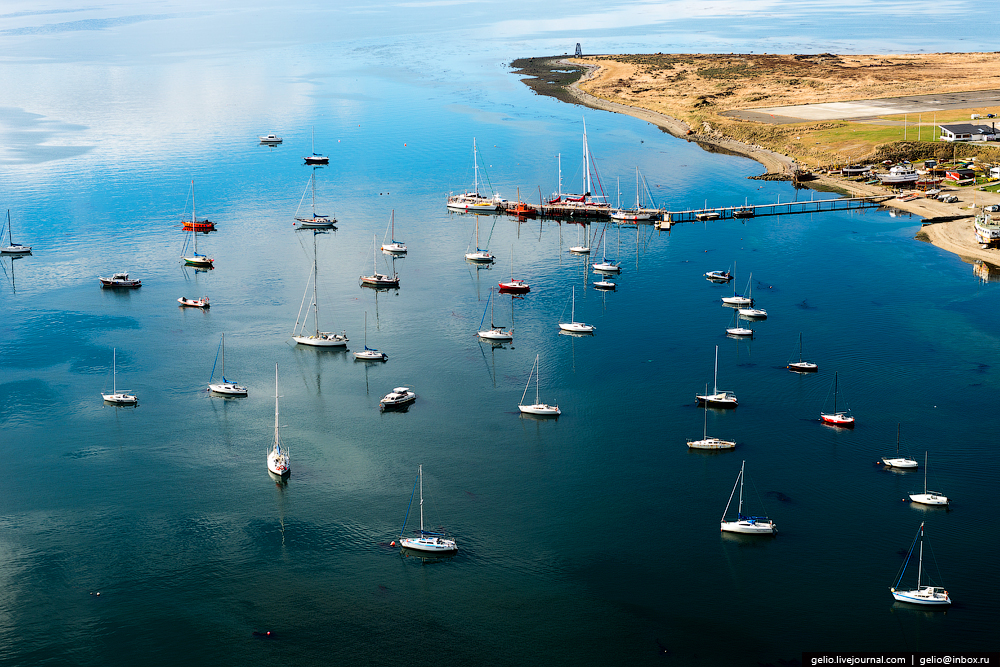 6. According to traditional standards, Ushuaia - a small town. However, on the island of Tierra del Fuego and in the homonymous Argentine province - one of the largest settlements. Constantly there are about 60 thousand people, but in high season (when they have summer here, in Russia, winter) population increases dramatically in the ten thousands. 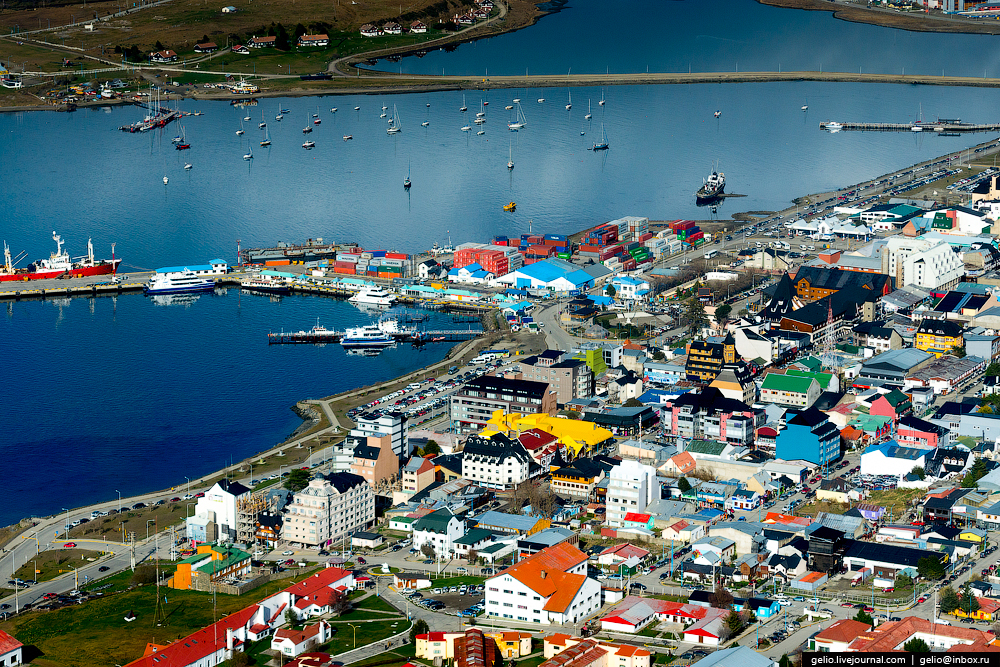 7. So attain the glorious age of some ships. Aground rescue tug "Saint Christopher" was built in the US in the 1940s under the name of "justice." Then he leased to the British Navy. According to some reports, he participated in amphibious landings in Normandy in 1944. After the war was sold to Argentina. In 1953 he was seriously damaged during the rescue operation - from the rocks then rented cruise ship "Monte Cervantes". Since then, virtually abandoned ship in the vicinity of Ushuaia. 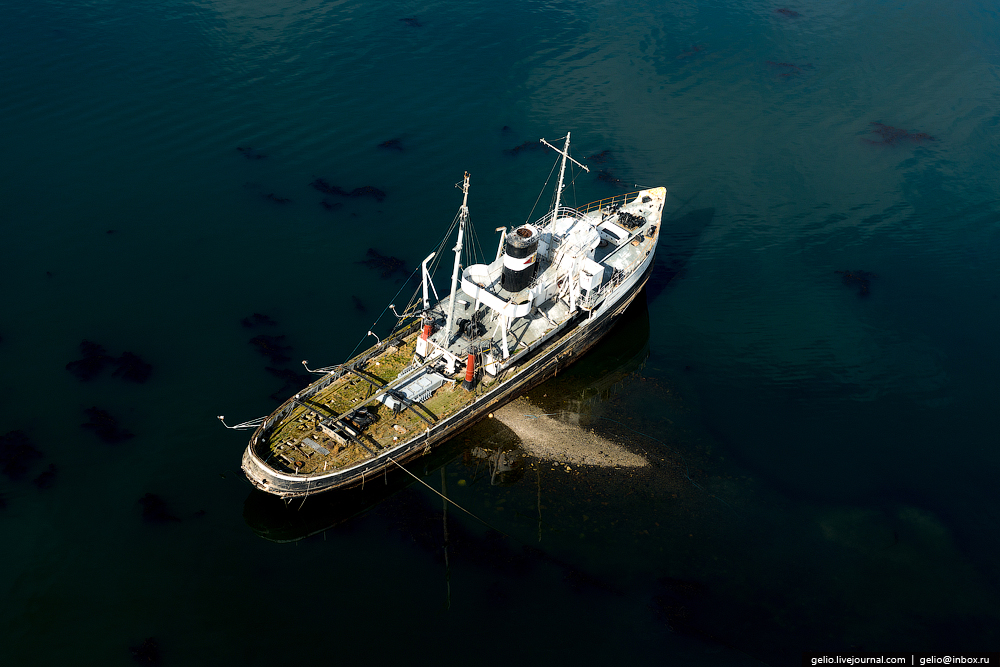 8. In Ushuaia no high-rise buildings. In the center of several parallel streets are 2-4-storied houses. And on the outskirts is an extensive "private sector" - small bright neat houses. 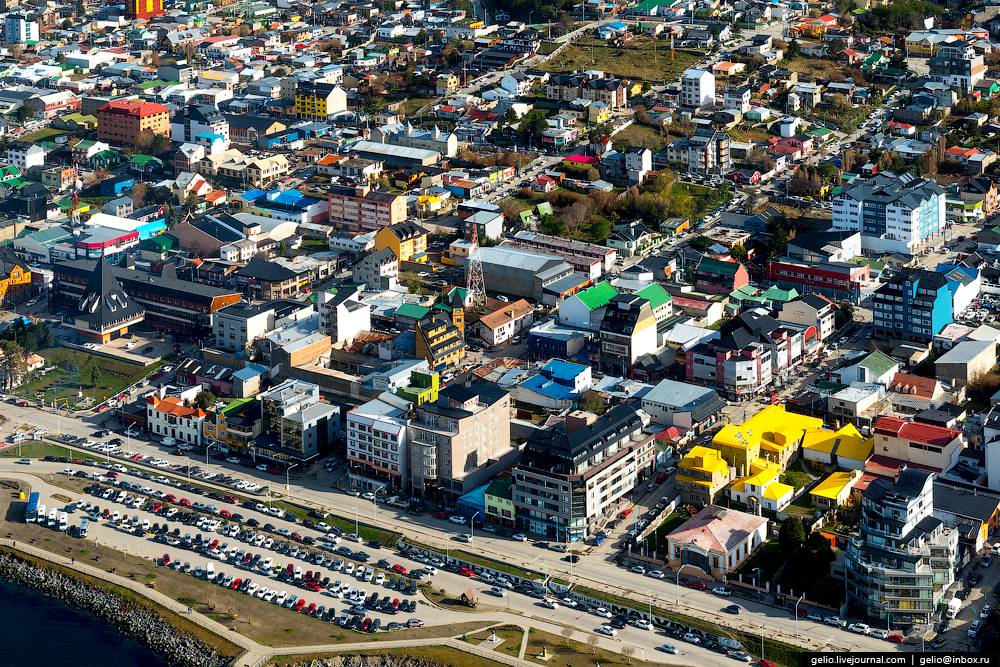 9. The city immediately and industrial infrastructure there can be seen, in particular, the port fuel tank. What does not fit with the surrounding Ushuaia beautiful virgin nature. In the vicinity of the city are the majestic peaks of the Andes, virgin forests and pristine glaciers. 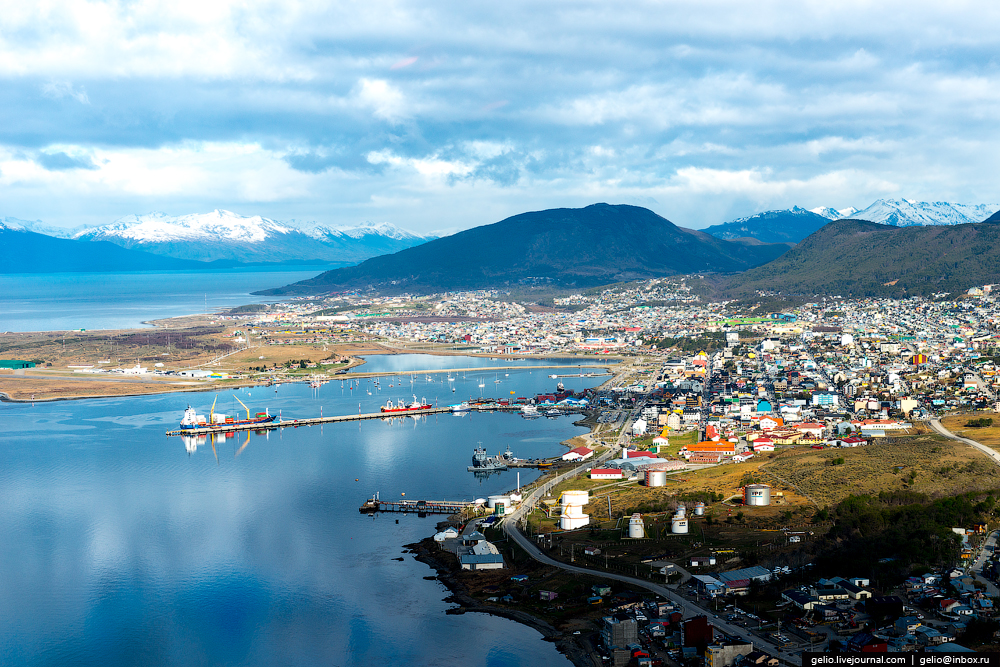 10. The terminal port of Ushuaia. Basically, there are moored cargo ships, but often come and cruise liners. According to international classification, Ushuaia harbor belongs to the "small" category, the maximum length of the vessels, which can come here - about 150 meters. 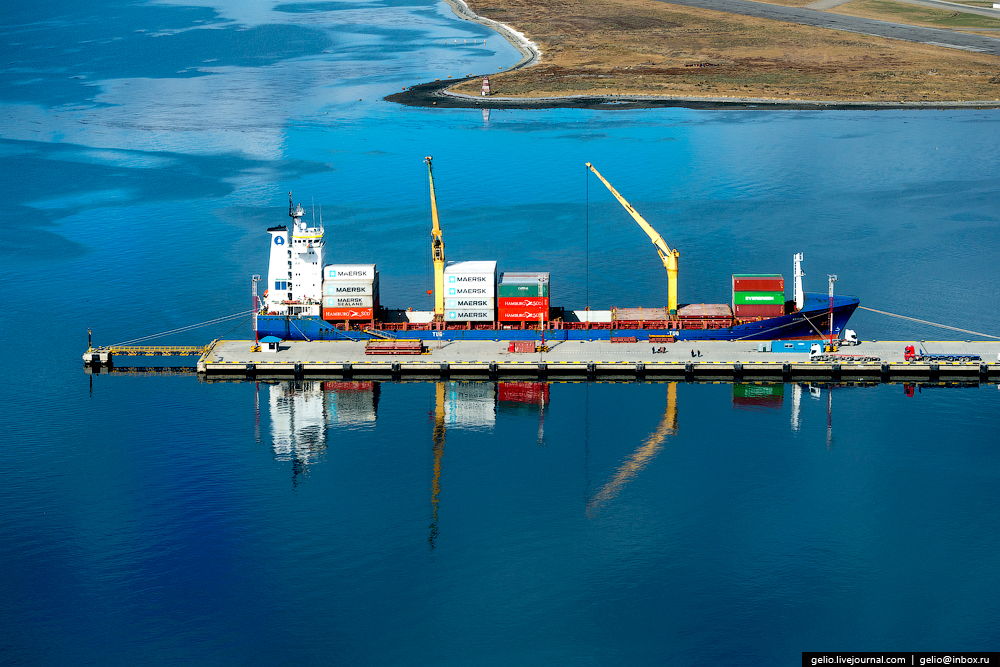 11. In Ushuaia begins the Pan-American highway, drifting north across two continents. Up here in Alaska 18,000 km. 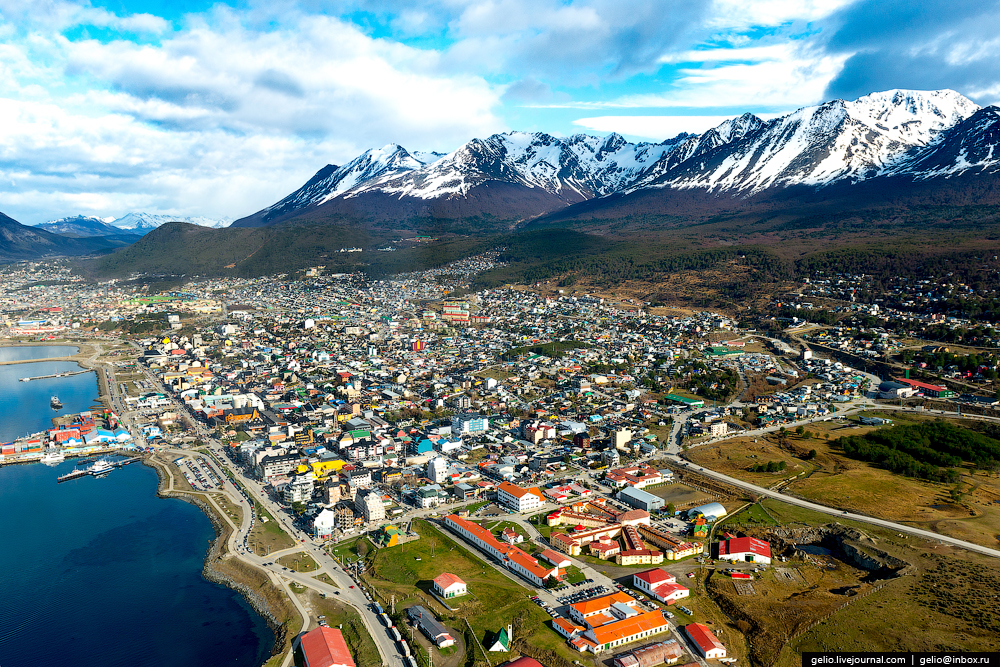 12. Airport Internacional de Ushuaia Malvinas Arhentinas.
It opened in 1995. The southernmost of the Earth International Airport. Hence make flights to Antarctica, Patagonia, the Falkland Islands and other areas of Tierra del Fuego. Also serves a large number of tourist charter flights. Despite its apparent simplicity, it is certified for the reception of large ships, such as the Boeing 747. Strip length is 3030 meters. 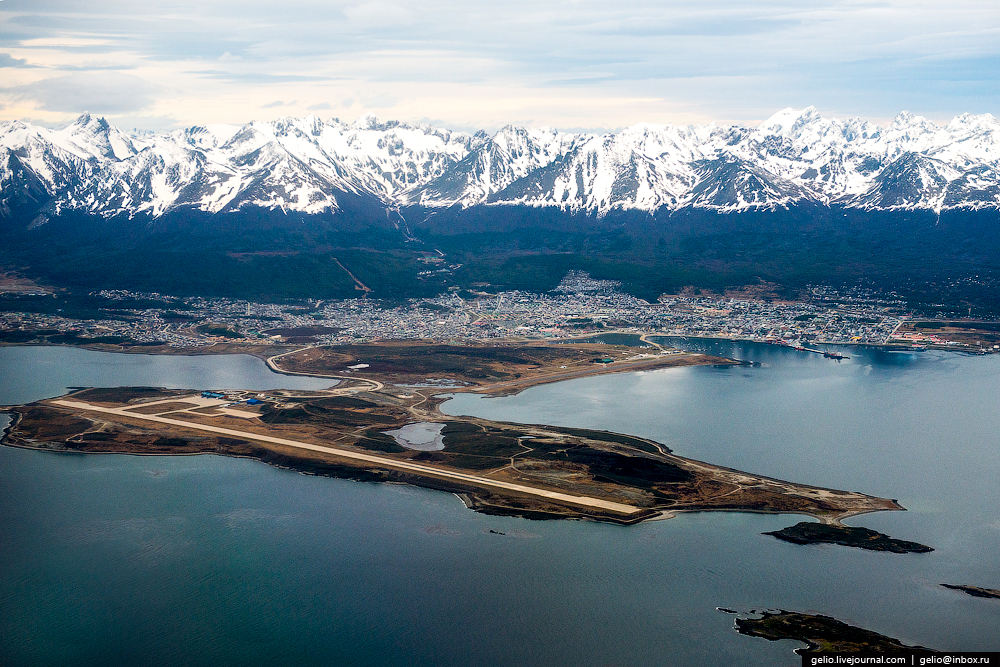 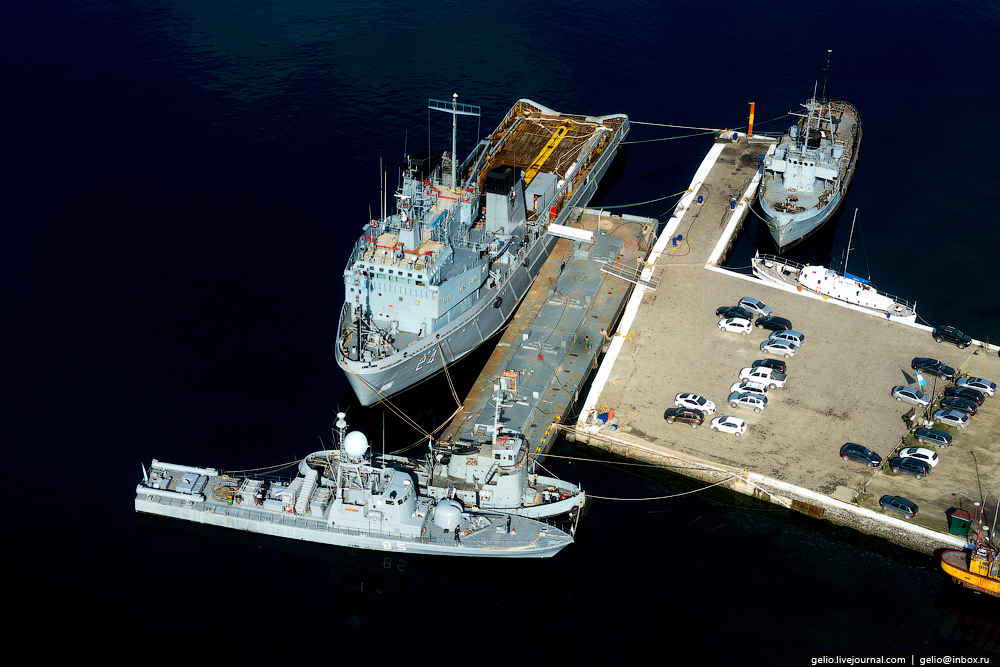 14. Beach in the vicinity of Ushuaia chosen cormorants and gulls, they arrange noisy bird colonies. These are the most common types of local birds, but in general, in Tierra del Fuego can meet representatives of more than a hundred species of birds. The local climate and conditions in several natural parks - a real "bird paradise". 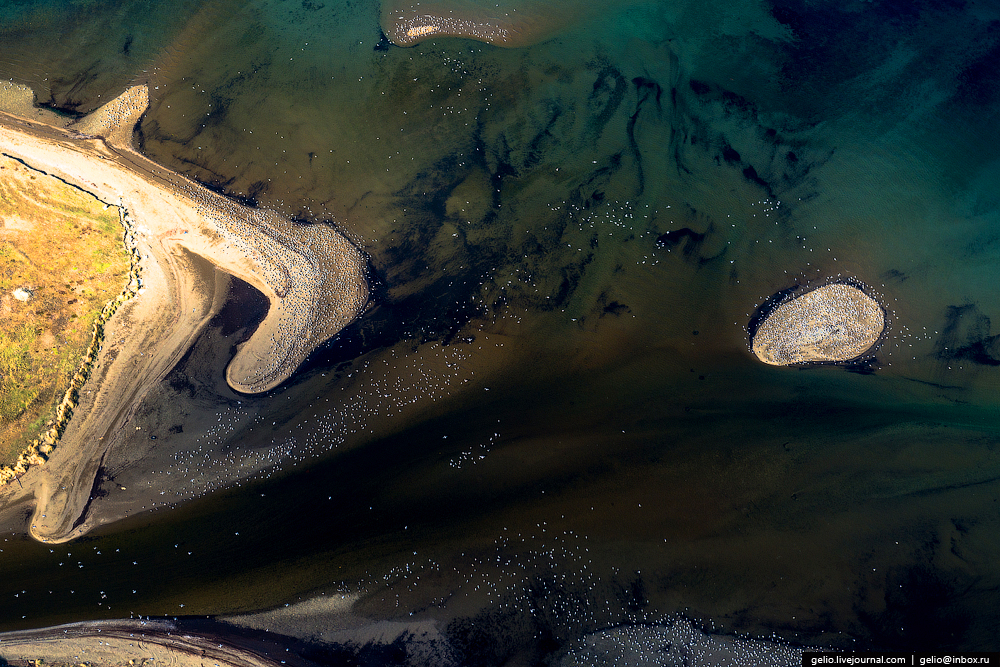 15 Beagle - strait that separates the main island of the archipelago of Tierra del Fuego, and lying to the south of the island Ost, Navarino, and other smaller ones. The first Europeans to this archipelago in 1520 Ferdinand Magellan discovered. He called it Tierra del Fuego because of the numerous fires on the coast. It was the signal that one of the indigenous tribes to warn others about approaching something unusual and possibly dangerous. 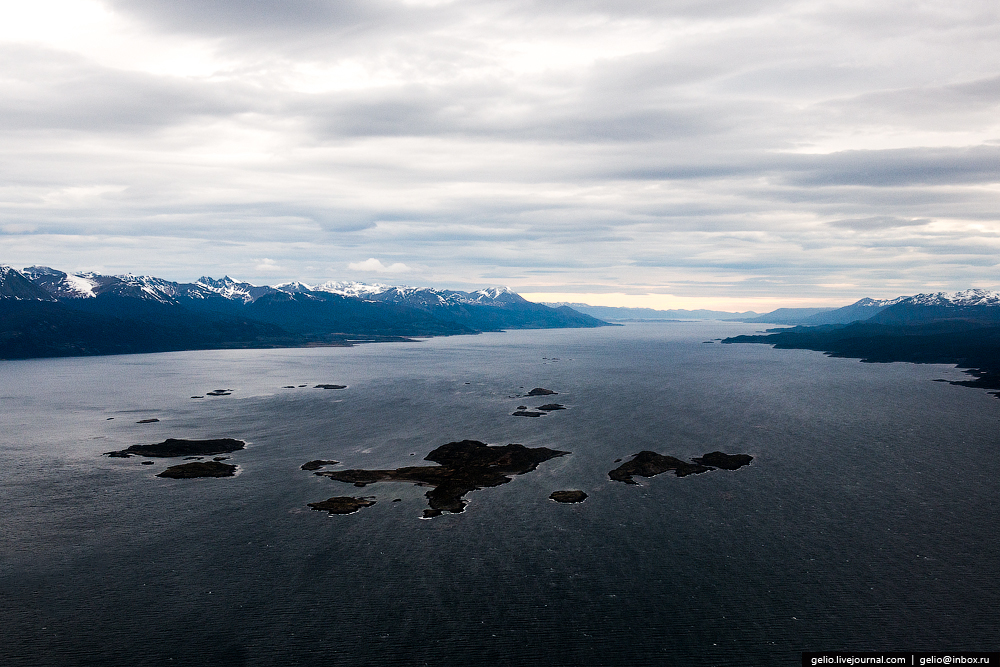 16. "Ushuaia" in the local Aboriginal language Yamana Indians means "invading the bay." The city settled on the edge of the Bay surrounded by chains of high mountains, which protect it from the winds. 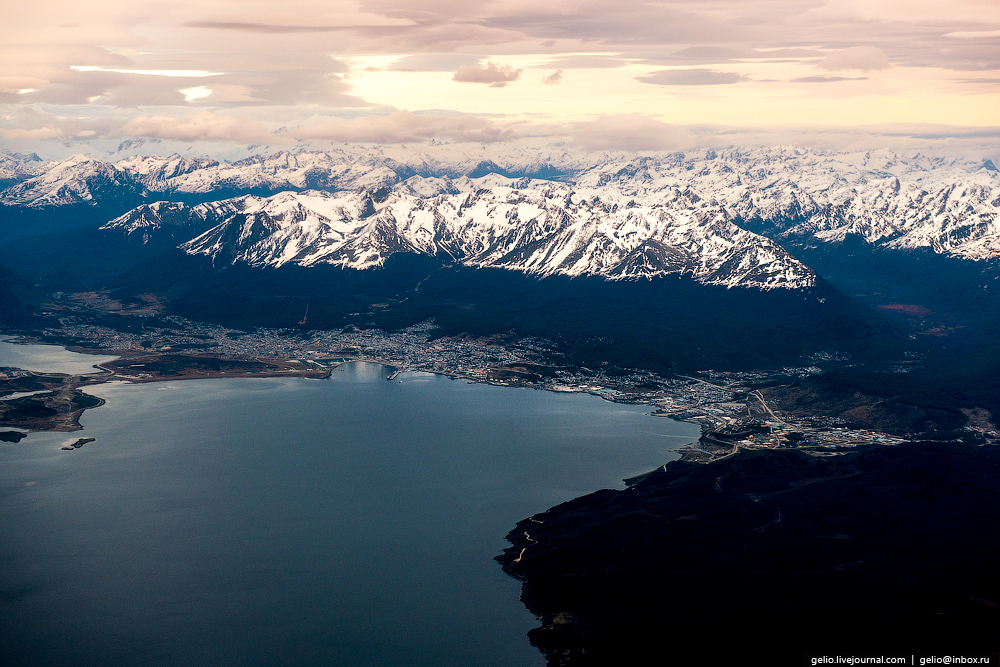 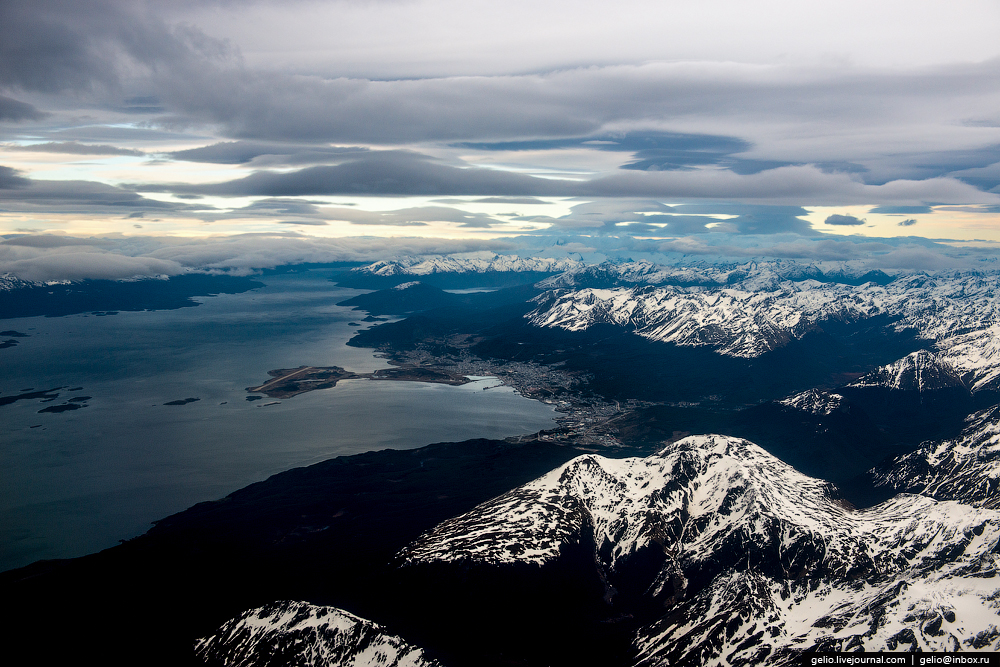 18. Monte Olivia - the highest mountain in the department of Ushuaia.
1326 meters above sea level. The name, of course, has nothing to do with olives. Just European colonialist ear is so heard and apprehended word Yamana Indians' language. They meant "mountain, visible from the sea." 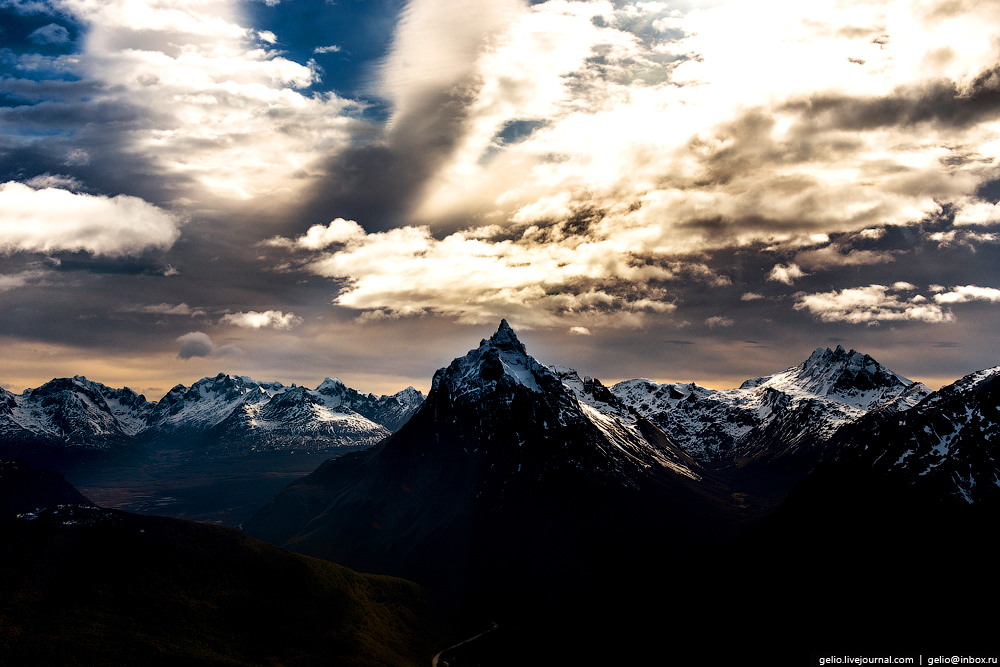 19. The average annual temperature in Ushuaia - about + 6 ° C. All the more surprising that in ancient times the local indigenous people went without clothes, body fat lubricating seals. And, they say, great feel. Arriving colonialists began to "dress" the Indians than in the end and have accelerated their extinction: the fabric wet, unaccustomed to it, and the natives were often ill. 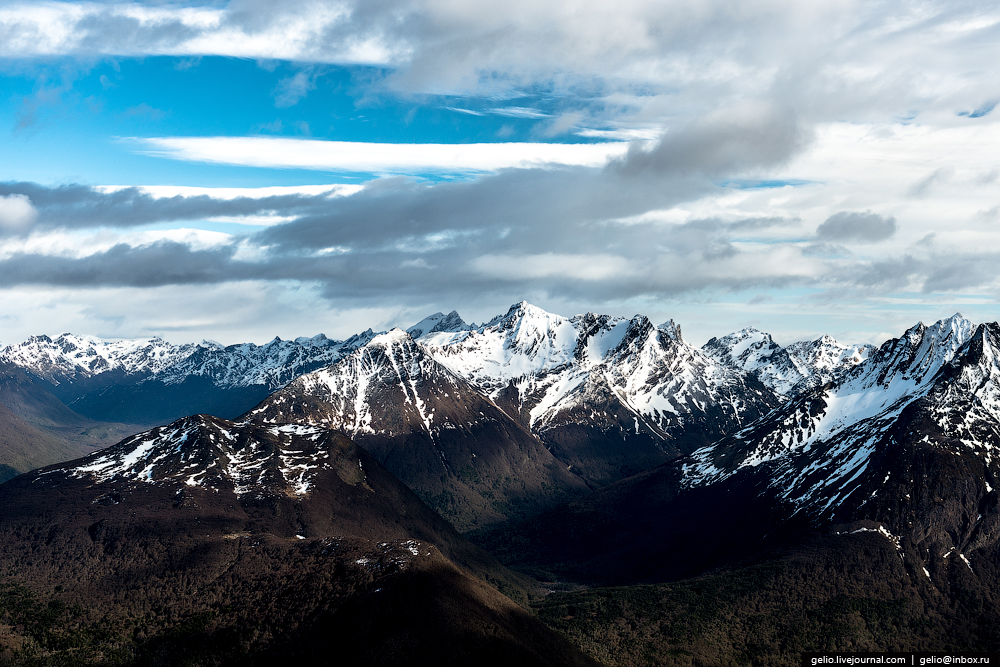 20. Olivia River.
On its banks filmed the famous "Oscar-winning" film "Survivor" with Leonardo DiCaprio in the title role. Therefore, in the spring of 2016, Olivia has become a place of mass pilgrimage of the tourists. Only walking routes were organized view of the complexity of the relief to the filming locations. 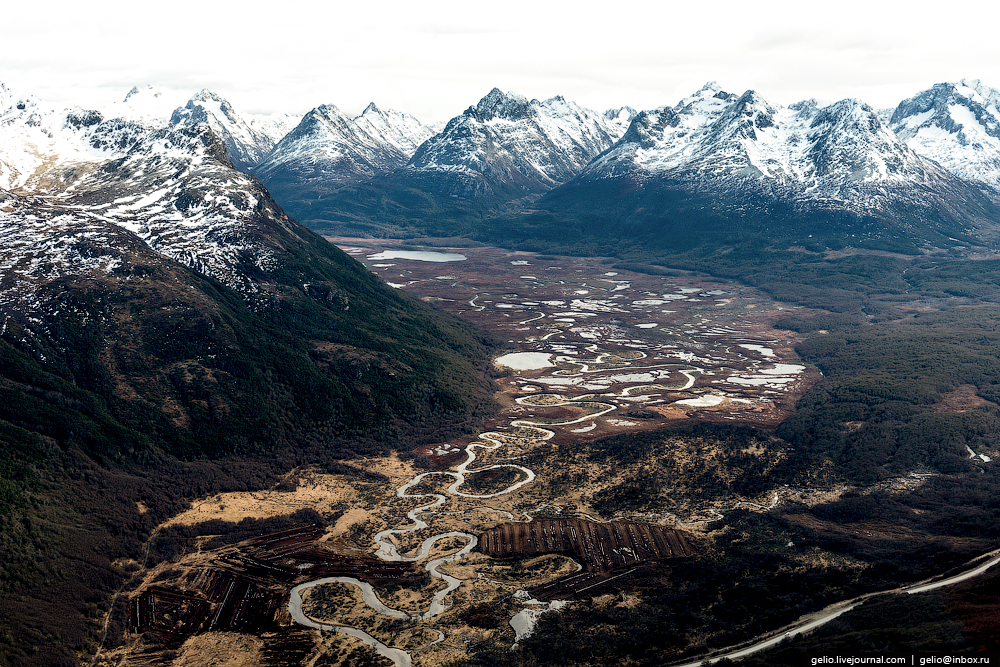 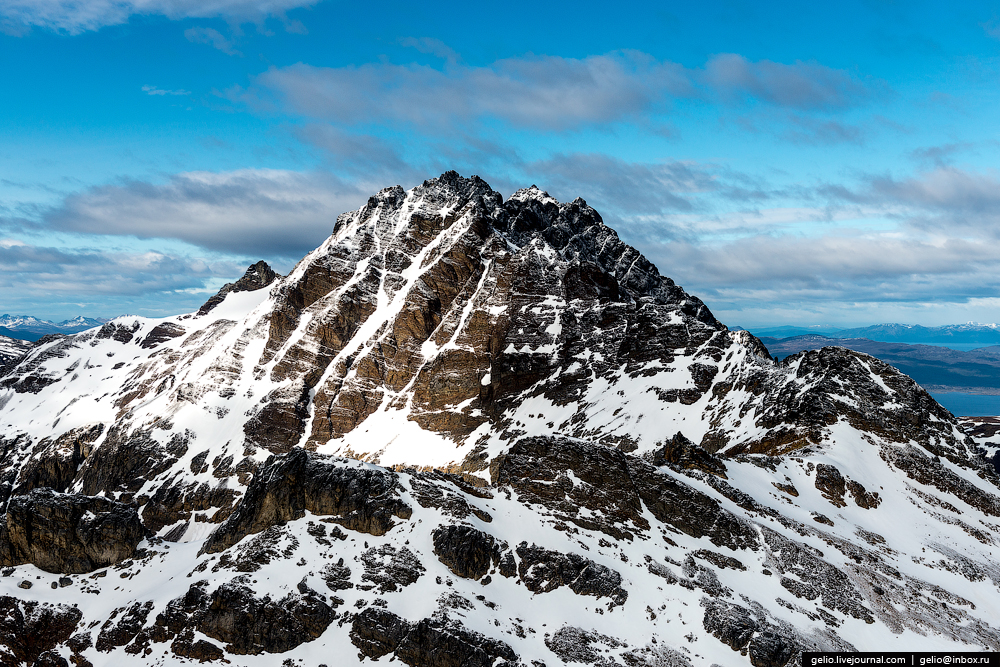 22. Tourists who had the good fortune to visit the southern city of Ushuaia Earth in the passport put a special stamp: «Fin del Mundo" ( "End of the World"). Optimists, however, are more likely to call the local places, "The beginning of the world": in any case, from a trip to Ushuaia is back with a new, "overloaded" head. 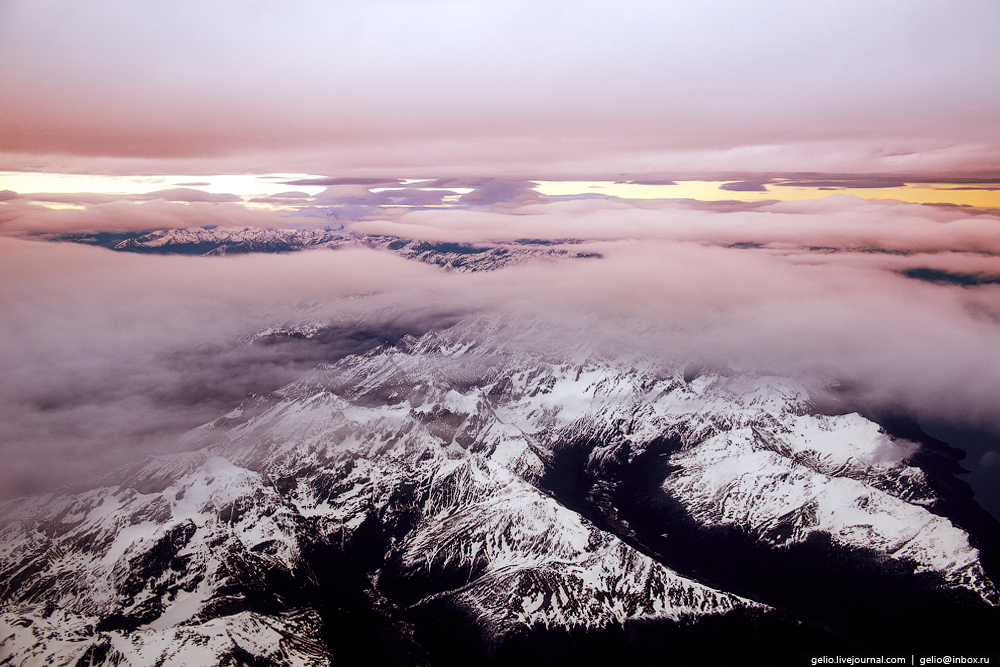