AdBlock detected. Site operation may be disrupted due to running AdBlock. Please disable it for this site.
Home Stories Argentina 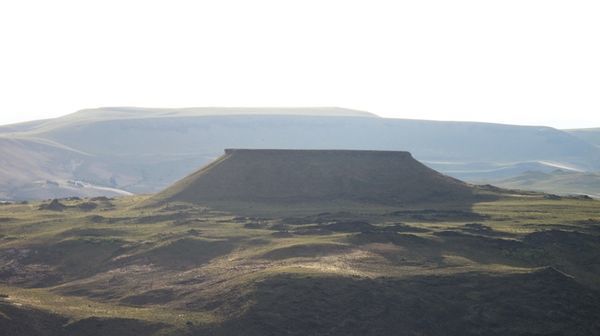 Reflecting on the new South American routes and shtudiruya archives, I came across a lot of the photos are not laid out earlier. Meanwhile, on the Patagonia I have very vivid impression. I will try here to share with you about them. 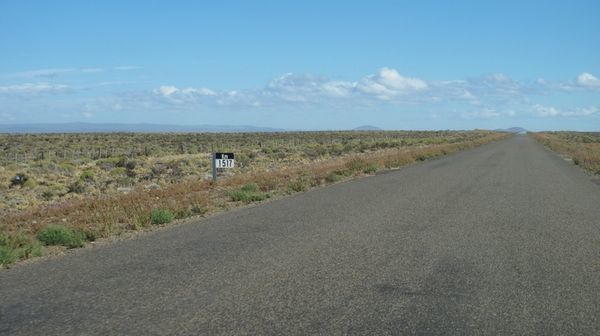 So, Patagonia - is not only a tourist brand of clothing. It is also a region located in the southern part of South America. It occupies a vast territory between the Atlantic and Pacific oceans, beginning almost immediately after the well-known to many of the region (province) Mendoza and ending the Strait of Magellan. Some relates to Patagonia Tierra del Fuego, but I think that this is wrong. There's a completely different nature and a different climate. In a straight line from south to north Patagonia extends over a distance of about two thousand kilometers.

Patagonia is a desert. Rather harsh, but beautiful place. Forests not (except for one natural enclave Bariloche), rivers and lakes little fresh water is in short supply everywhere. 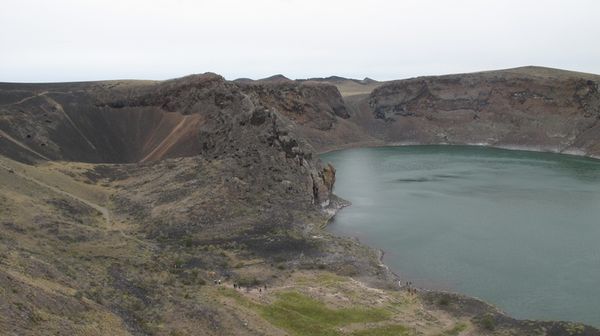 In the foothills of the Andes volcanoes and many traces of volcanic activity. 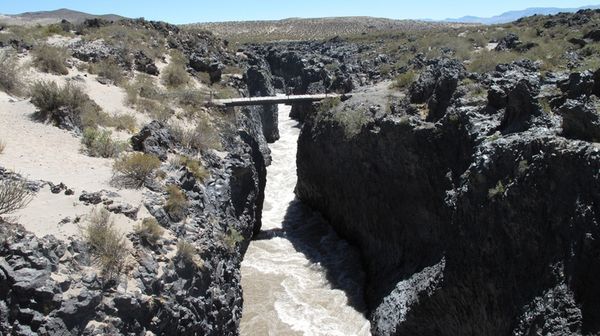 River made ​​its bed straight into the lava field. 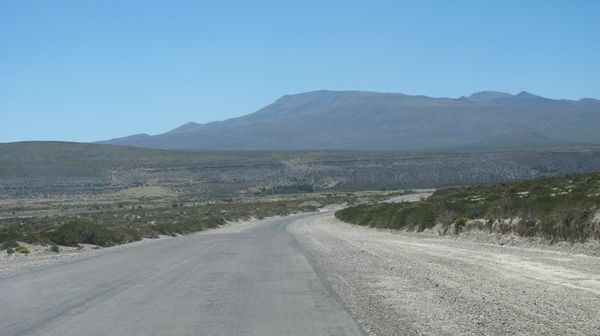 However, it is located several natural objects under the protection of UNESCO. The most famous of them - a Los Glaseros complex glaciers coming down from the Andes directly into the lake. On the Chilean side on the other side of the mountain range national park Torres del Paine. Located close to the glaciers peaks Fitz Roy and Cerro Torres, who, although not included in the UNESCO list of protective, but de facto is one of the symbols of the whole of South America. On the Atlantic side of the Peninsula Valdes Patagonia is (also a UNESCO) untouched exotic fauna. Valdez - this is such a "Patagonia-light", it is the warmest and comfortable part. Well, there is still a cave of Las Manos, in which prehistoric people left numerous imprints of their hands. Looks impressive. 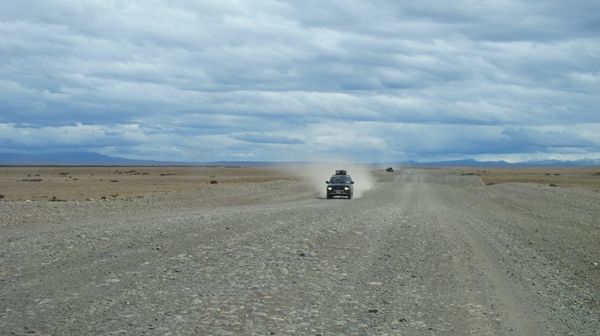 By Patagonia is best to travel by car. You can hire a car in Buenos Aires or in cities with tourist bias, such as Bariloche and El Calafate. In other cities, it will be much harder. 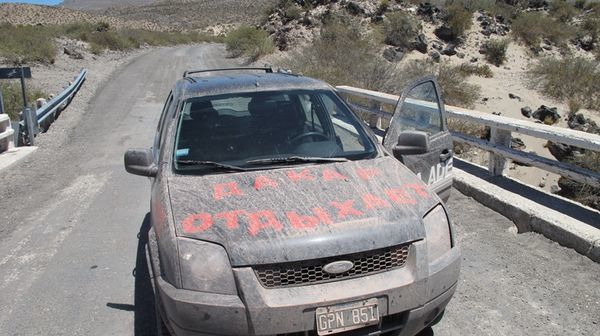 If you include a trip to Chile's Torres del Paine and Tierra del Fuego (the most southern province of Argentina), it is necessary to require a so-called Kar Rentale "White list" - special paper, which gives the right of way to rent a car through the territory of Chile. The cost of rent like in Europe or a little lower. 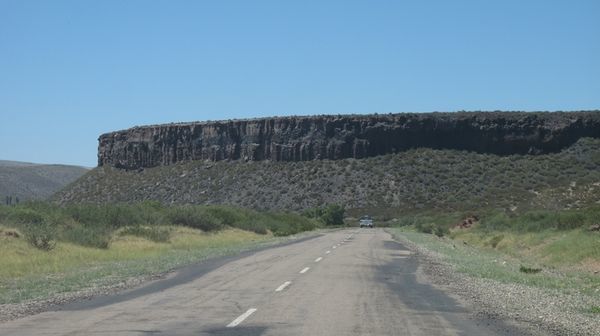 Why drive? - Railways in Argentina there is little, walking and cycling is very problematic to overcome thousands of uninhabited distances on a motorcycle can be, but complicated by local gravel roads, aircraft you will not see anything, well, traveling by bus you follow his schedule, and do not will. So it is a car. However, you have to be ready immediately to the two trouble. Firstly, most likely your windshield replacement will go under because it has entered a gravel road from oncoming cars on dirt roads, and secondly, and this is no joke, you have to be extremely careful in the wind, especially on the same primers . 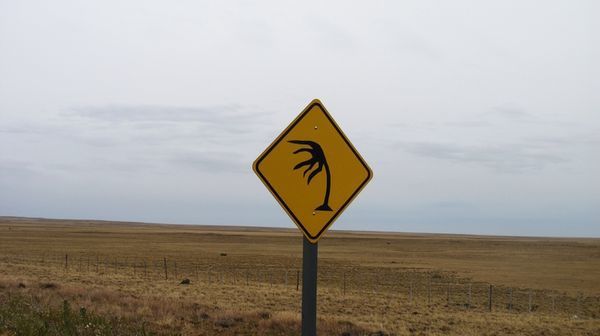 I personally was himself not once witnessed how the wind literally turned the car and dumped them in a ditch. Actually I do on the Altiplano in the past year realize that gape kuvyrnulsya for the same reason. 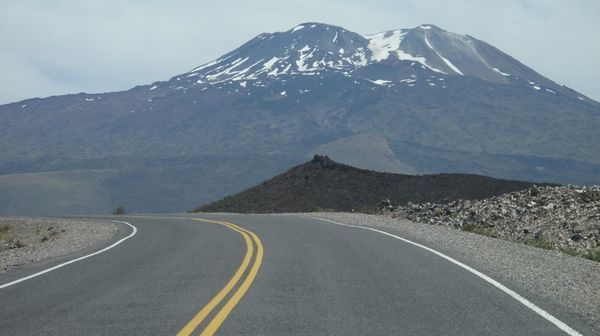 From north to south (or vice versa, from south to north) in Patagonia laid two main roads: travel, places dirt, Ruta 40 that runs along the ridges of the Andes and boring, all asphalt road №3, runs exactly along the coast of the Atlantic, which is an integral part of legendary Panamericana. Also among them are laid several ways very different beauty and quality. The average distance between the more or less large settlements in Argentina about 300 km. But only at first frightening figure. Then you realize that most of the roads are straight and flat and riding them easy and comfortable. 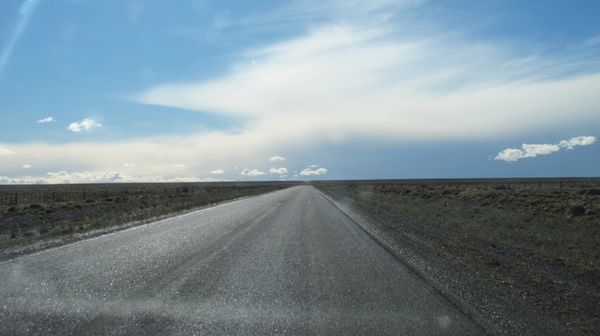 The main thing - do not fall asleep at the wheel on a perfectly straight road. By the way, every year in Patagonia is becoming more and more paved roads. Work in full swing vengeance. 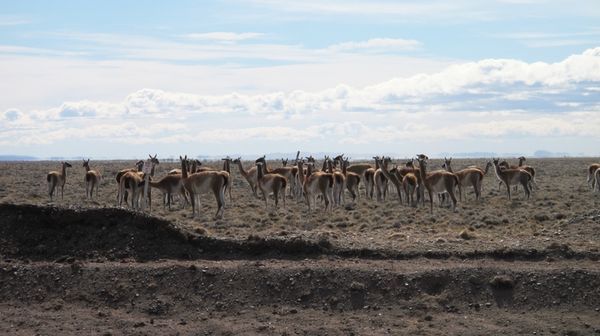 A herd of guanacos

Ironically, Patagonia is quite rich wildlife. 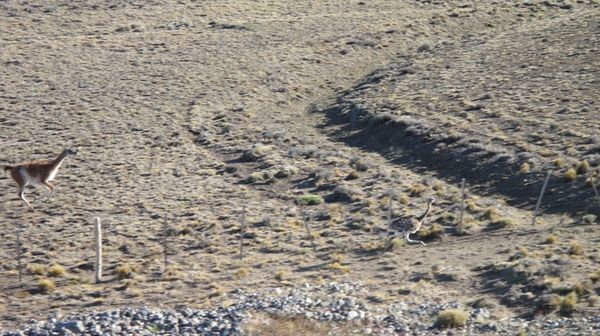 Race "Who is faster?" - Ostrich or guanaco

In addition to livestock (cows and especially sheep) roam the wilderness numerous herds of guanacos and flocks of ostriches. 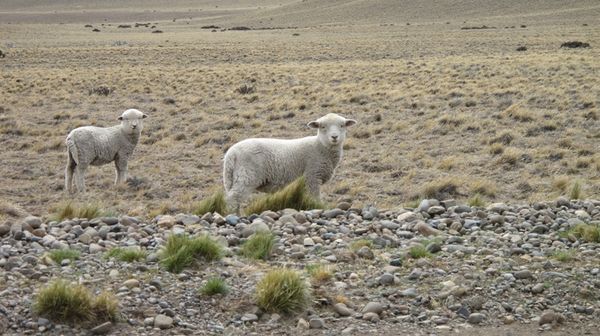 If a cow - a symbol of the Pampa, in Patagonia is a sheep. 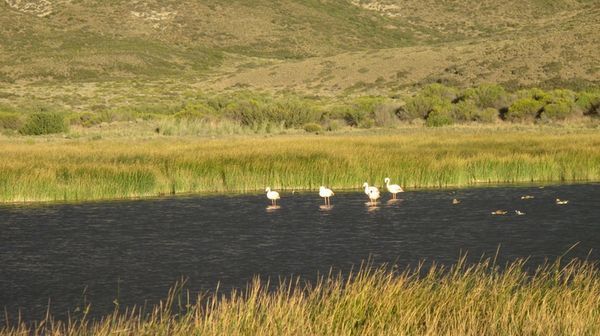 Local Argentine flamingos are not as beautiful as the equatorial and African, but ... also flamingos ...))

Under mounds sit hares, which are on guard Argentine gray fox. There is a cougar, but I have not seen.

Runs across the road ostriches strive to get under the wheels. 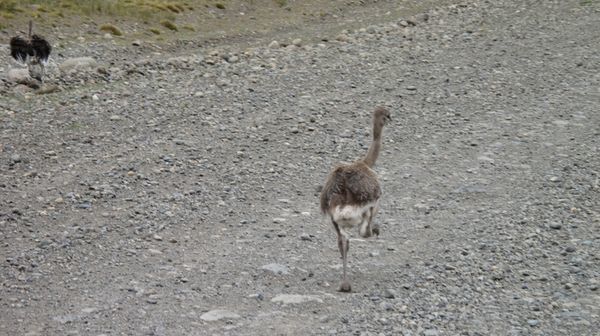 One day I had to go to Patagonia in the late evening, somewhere in the 11 hours of the evening. At dusk, the area is literally stirred. From under every bush on the road jumped hares, I counted them something around 200 pieces per kilometer of road. Driving very carefully and quietly, but still had to knock down three pieces. And I saw there in the mountains and local chinchilla funny little armadillo. Read more about it here: http://jung-le.livejournal.com/82892.htm l In general, with regard to Valdez, it's a different story, there is few and far between all coastal fauna, including whales and Magellanic penguins. 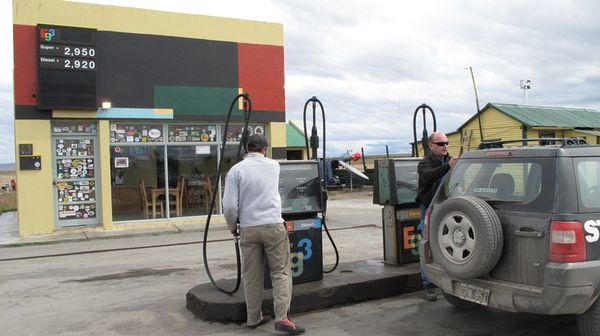 By Patagonia (and generally in South America) must travel with their "identification marks" - business cards, postcards, brochures and the like, but the best labels. People glues them everywhere, at all points of your route. There is already a good tradition. 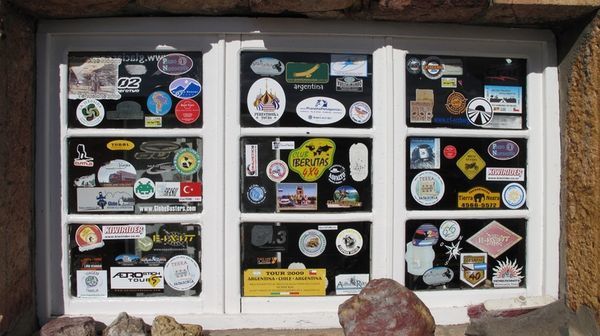 Better to stick in a specially designated place his label than scratch the nail on any wall "Vasya was here." In Patagonia there is a natural enclave, clearly does not fit in its beauty in desert landscapes. This is the city of San Carlos de Bariloche (in common - just Bariloche) with their suburbs. Bariloche is also located on rue 40. 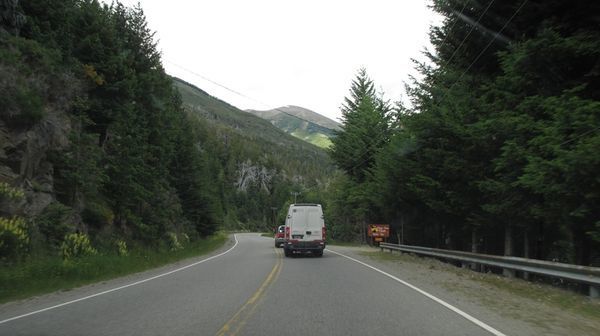 This is the only place in Patagonia (if not in the whole Argentina), where there are familiar to us of the forest. The area resembles something like the North Caucasus. 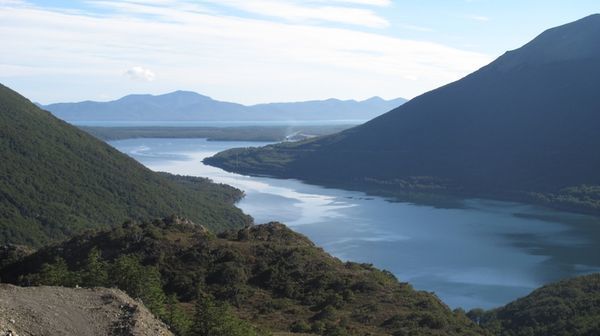 Very beautiful mountains and lakes bordered by the city. Here is the best ski center in Argentina. Buy a chalet in Bariloche is considered the highest chic, that's why there is the residence of the Madonna, Stallone and many other celebrities. It is in these places settled after the 2nd world many aspiring Natsik. Los Glaseros are several glaciers coming down from the mountain ranges of the Andes in two large lakes Argentino and Viedma. 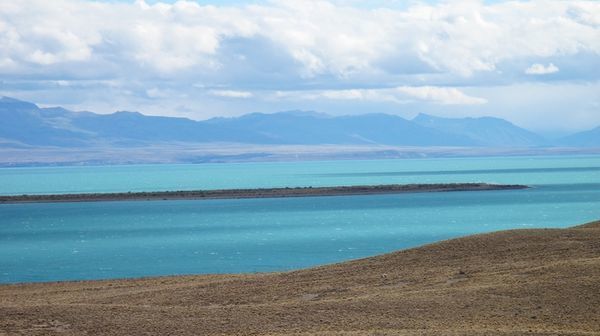 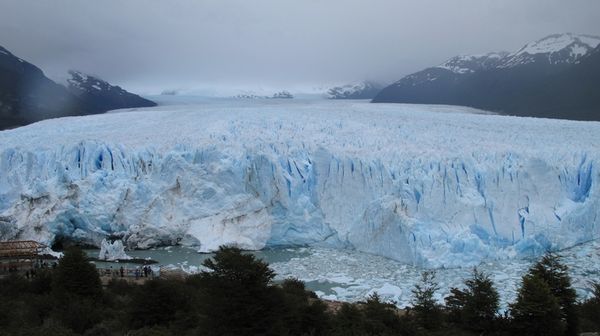 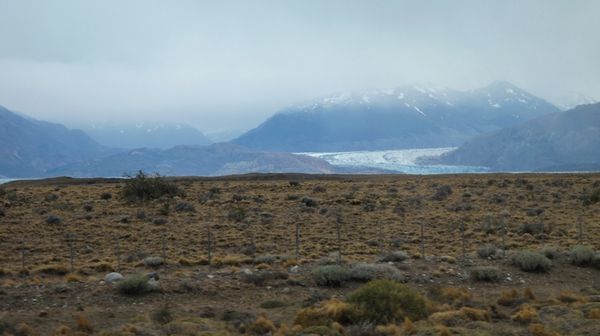 Argentine down the most accessible glacier Perito Moreno, in Viedma - Glacier Upsala and still some others. Argentina situated on the banks of the city with the federal Calafate airport. Not far from Calafate (just less than two hundred and fifty kilometers) near Viedma is tourist town of El Humpty from which on a clear day is visible complex mountain peaks Sierra Torres and Fitz Roy.
Well, I ... I hung up the post went to buy ticket to Buenos Aires ... This time I was waiting except Argentina, Brazil and Uruguay.
Finally a few more typical Patagonian landscapes .. 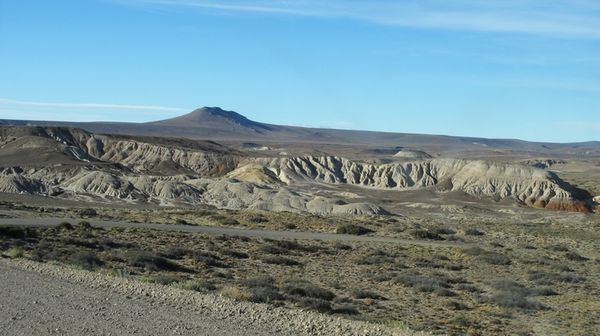 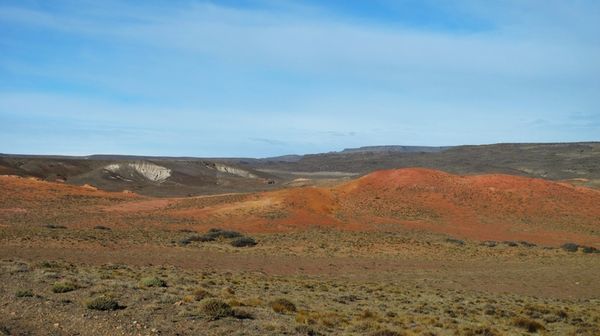 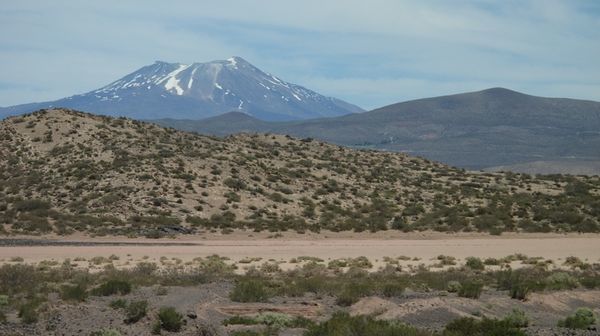 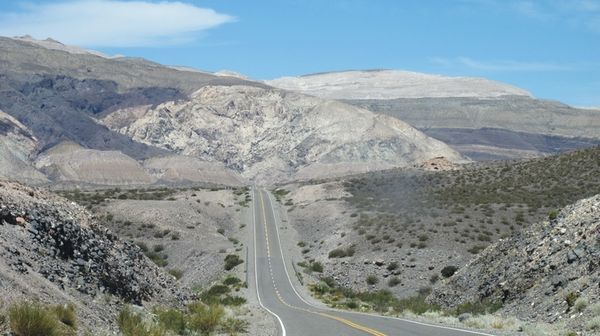 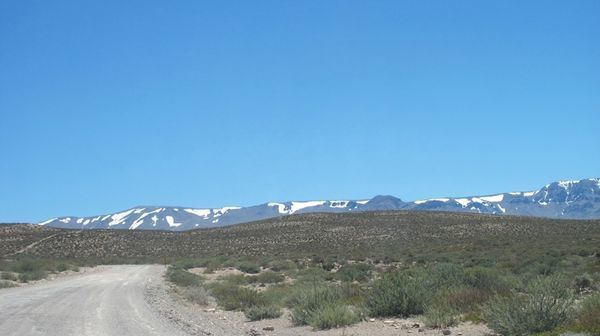 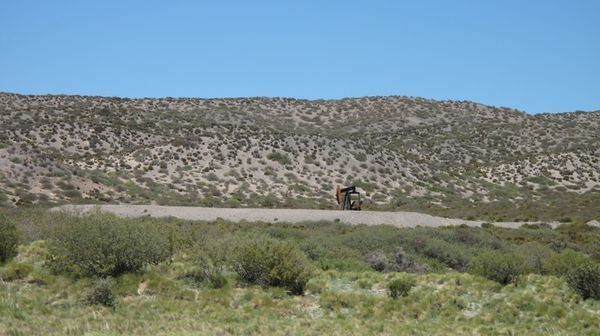