Berat at the evening. Albania.

Our plane arrived in Albanian Mother Teresa airport after midnight. Since public transport at that time had long finished their work, I had pre-ordered transfer to the hotel of the city of Berat. We arrived, I must say, very tired after a night flight and therefore all the way in the car, without ceasing, nodding. Nevertheless, even in a dream, we could not help but feel the disgusting quality of Albanian roads that mercilessly threw us every now and then falls into the arms of sleep, back in this strange and unfamiliar to the reality of the moment, making every minute jump on the endless potholed and potholes, is an integral element of our difficult path. View, from the barely ajar during the next century sticky jumping in between the both of them, obeying an irresistible desire to shut down the body, emaciated slammed again, snatched from the darkness stretching along the roads crooked poles, the skeletons of buildings, gouging chunks of asphalt and ominously sparkling in windows pupils stray dogs. But after about three hours and a half suddenly everything changed! The car stopped, and the first thing I saw, or rather felt when, opening the car door, heel touched the pavement of Berat, it was a fabulous paved street! I, not having even take a step already knew I incredibly like the ancient city, Enchanted me from the first seconds of my acquaintance with him. We suddenly find themselves caught in another world, in another era! Underfoot discordant ranks stretched blocks of gray stone, squeezed parallels white walls charming little house, topped with chocolate neat stone roofs. City of a thousand windows - so called Berat. 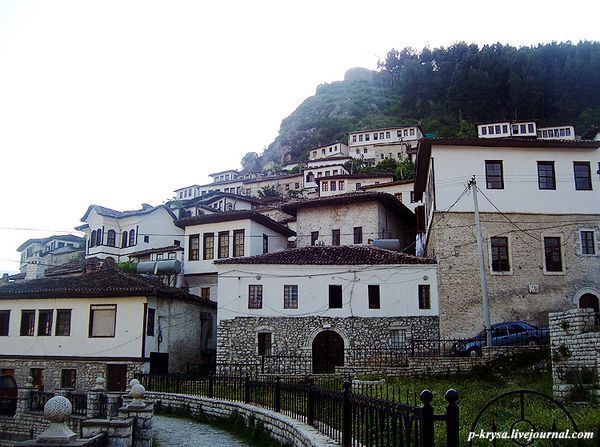 In Berat, we spent a couple of days. Berat - a completely safe place, and we have great pleasure in enjoying the beauty of the evening as well as the city at night. As Albanian Gjirokastra, thanks to its architecture since the Ottoman Empire, Berat is included in the UNESCO list of World nasleniya. 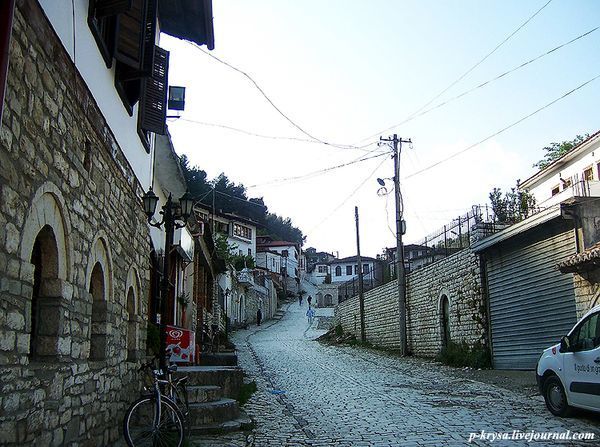 Berat is one of the oldest cities in Albania. Urban settlement on the territory of modern Berat was established in IV century BC. e. At the beginning of the III century BC the city became a well fortified place and was known as Antipatrea. In the IX century the Bulgarian Tsar Simeon I gave him the name Beligrad from which happened modern name of the city. 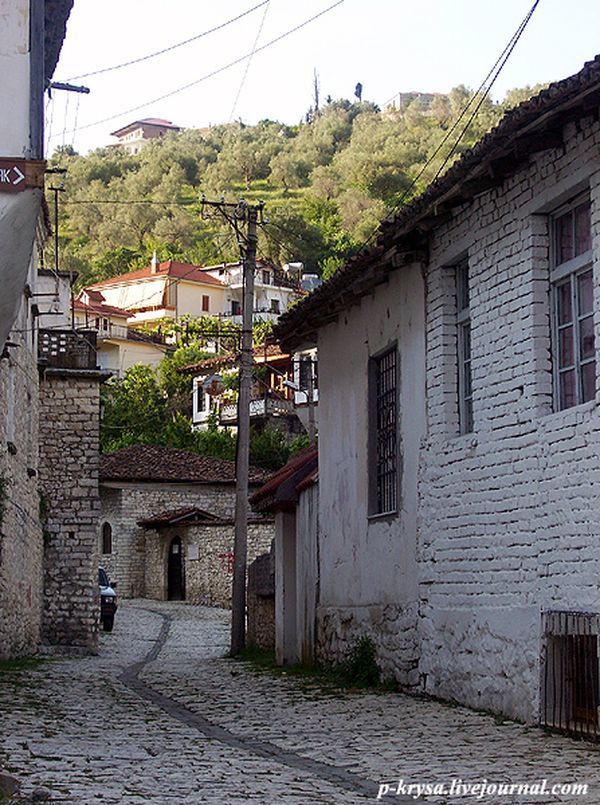 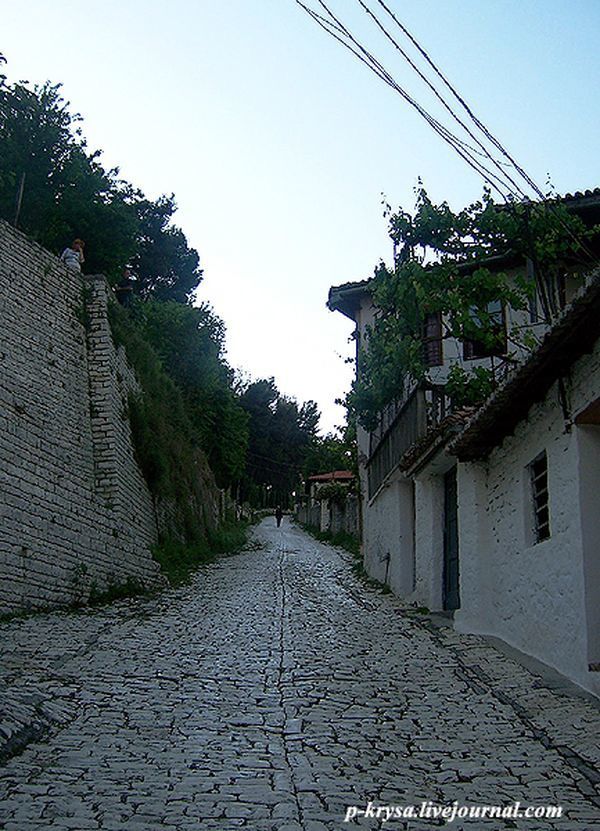 The name of the city of a thousand windows received in connection with unusual buildings - houses seemed to climb the hill, lining up one above the other in a vertical plane, like piling on each other's roofs. Buildings are generally two-story, top floor often slightly overhangs the bottom. In each of these houses three times more windows in houses other than Alban cities. On the dazzling white stone walls of the same type of flat brown frame countless windows look like a pair of scissors cut through a white sheet of paper. Stunner! 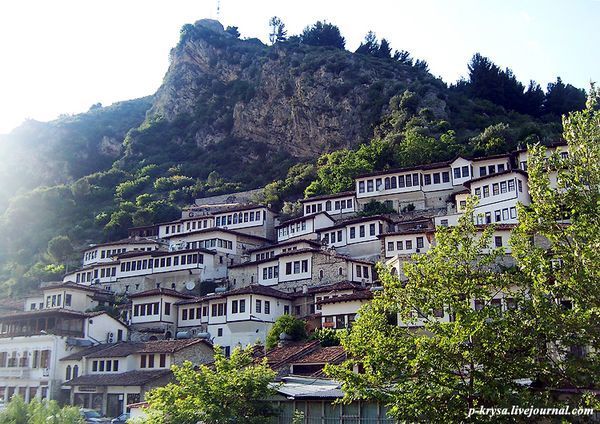 In the same style and built the mosque.
The mosque Beqarëve: 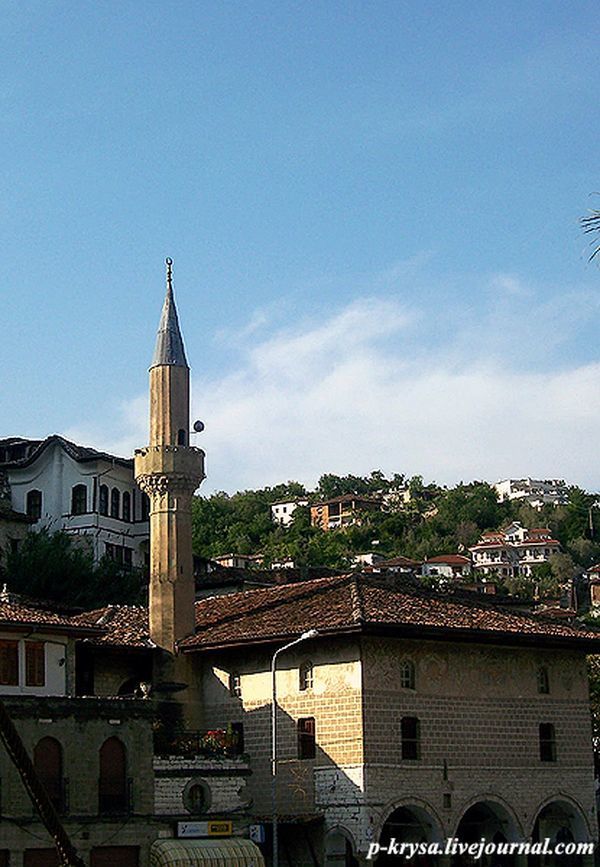 As everywhere in Albania, near the mosque always adjoin the church. Across the bridge is the Orthodox Church of St. Thomas, built in the XVIII century, but was destroyed during the atheistic policy of Enver Hoxha. Once again it was restored after the fall of the regime in the 90s on the local media: 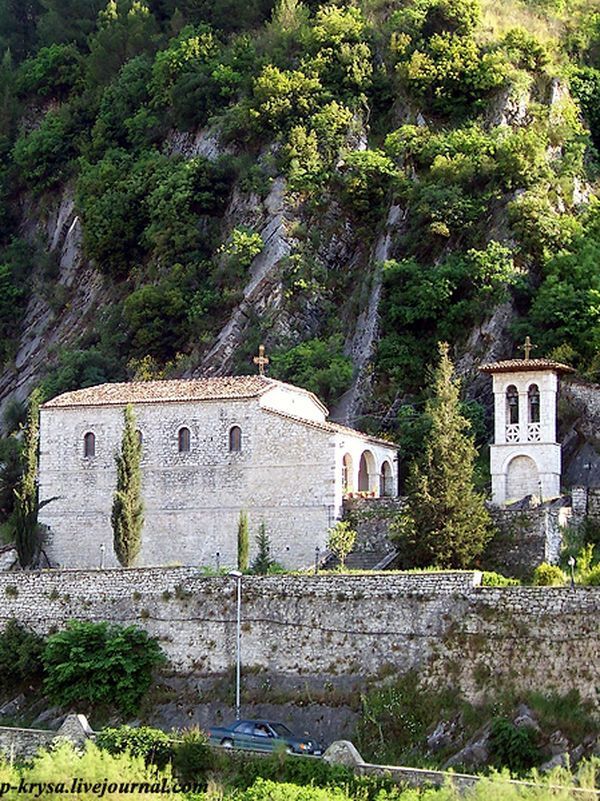 The main square of the city, which are sent to all the buses and vans, decorated with an impressive Cathedral of St.. Dmitry, built in 2006 on the site of the old city's cathedral: 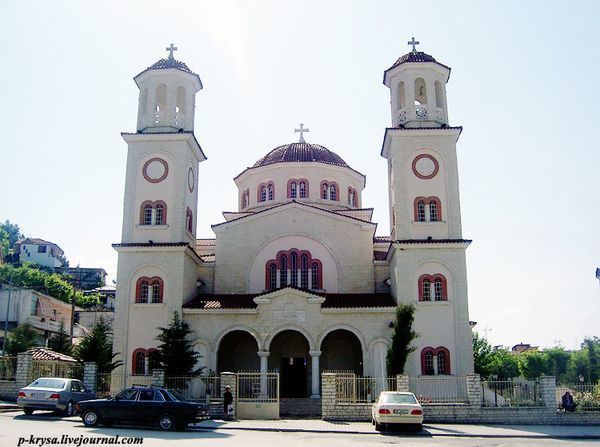 But the most impressive looks Berat night, when the walls of the houses are illuminated yellowish lights, thereby delineating the contours more dark windows. 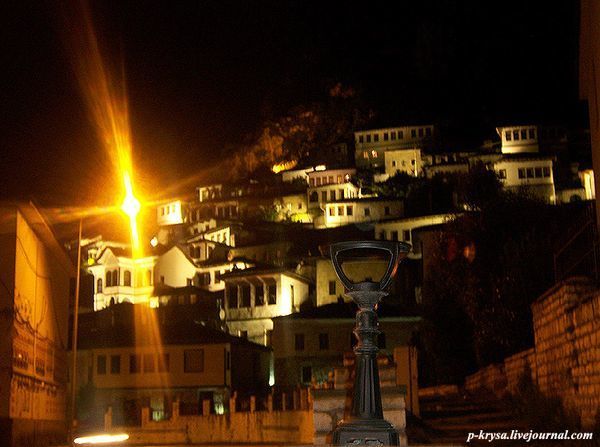 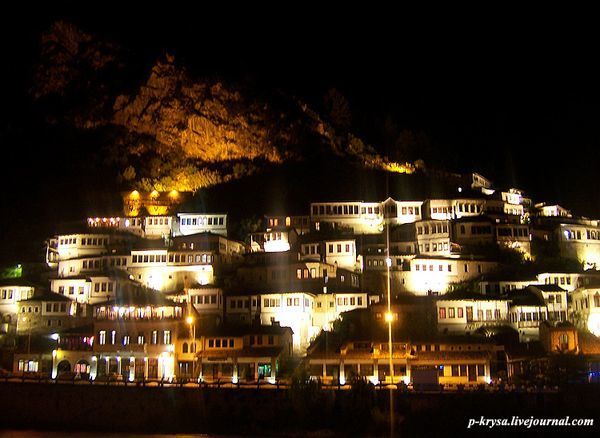 Look closely at this picture of the night of Berat. It can be seen as if floating in the dark crosses. This is the church of St. Michael, alone located right on the cliff. It looks fantastic! 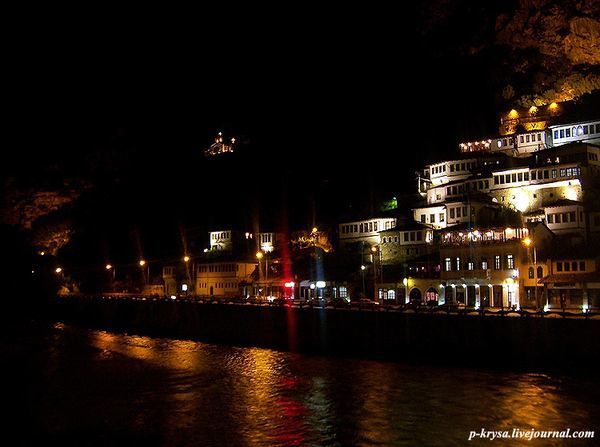 Berat is spread at the foot of the mountains Tommori (these mountains will still post) on the banks of the picturesque River Osumi. Across the river deployed several bridges. Stone Bridge Gorica, one of the largest medieval bridge of the country, was built in 1780, but originally it was made of wood: 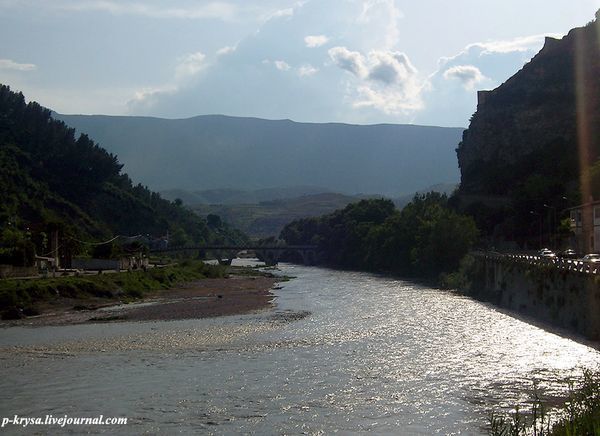 But the main attraction of the city - is a fortress located on a hill. About her I will tell the next time, and while a few species from the fortress of the city: 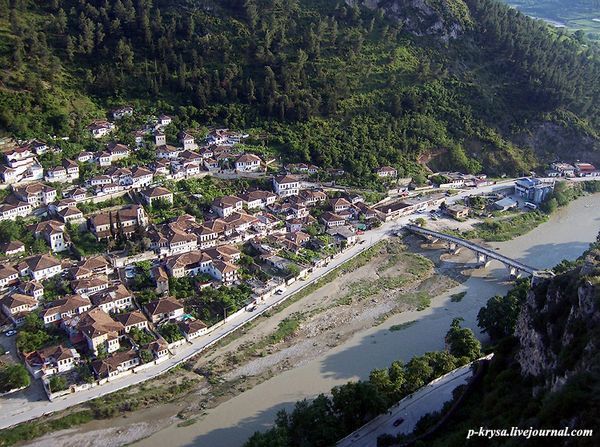 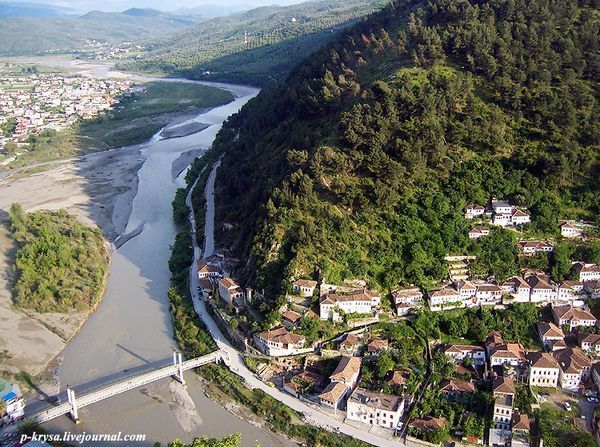 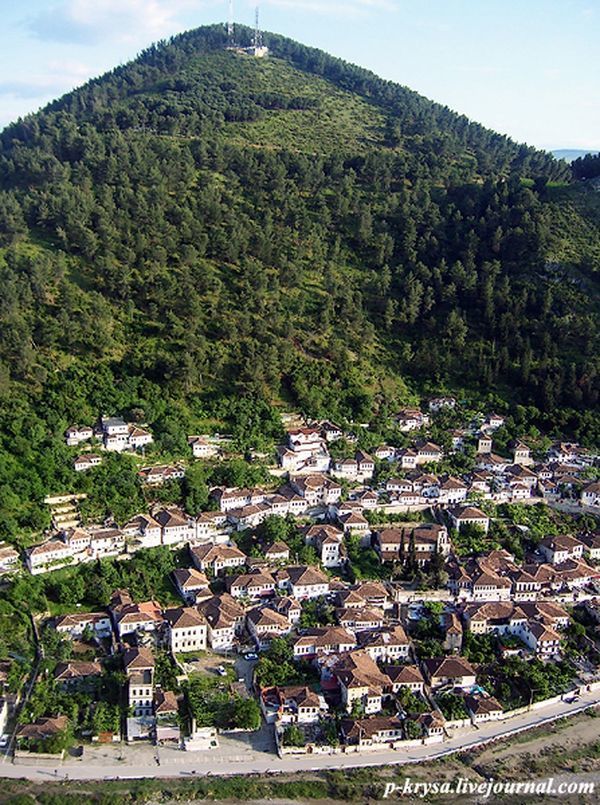